Happy New Year! The first three days in Tokyo were great and with the start of the new year it is time to do something very different. In the last two days I flew to Hokkaido and went skiing in Niseko with a friend.

On New Year’s Day I woke up early again (I did not sleep for more than 4 hours the last nights) to leave Tokyo with the sunrise. Like I mentioned before, I changed my plans from following the different New Year’s customs and visiting northern Tohoku to going skiing in Niseko with my friend Casey from California.

We met in Tokyo in 2012 and stayed in touch eversince. This time our schedules happened to line up again, so we decided to go skiing together.

A long ride into the mountains

While most of Tokyo was busy attending to the first sunrise and the first shrine visit of the year, I embarked on my first flight of the year to Sapporo airport. Again, I used the limousine bus since it was convenient with two suitcases and the stop was close, as well. In a way I also saw the sun rise for the first time in the year. 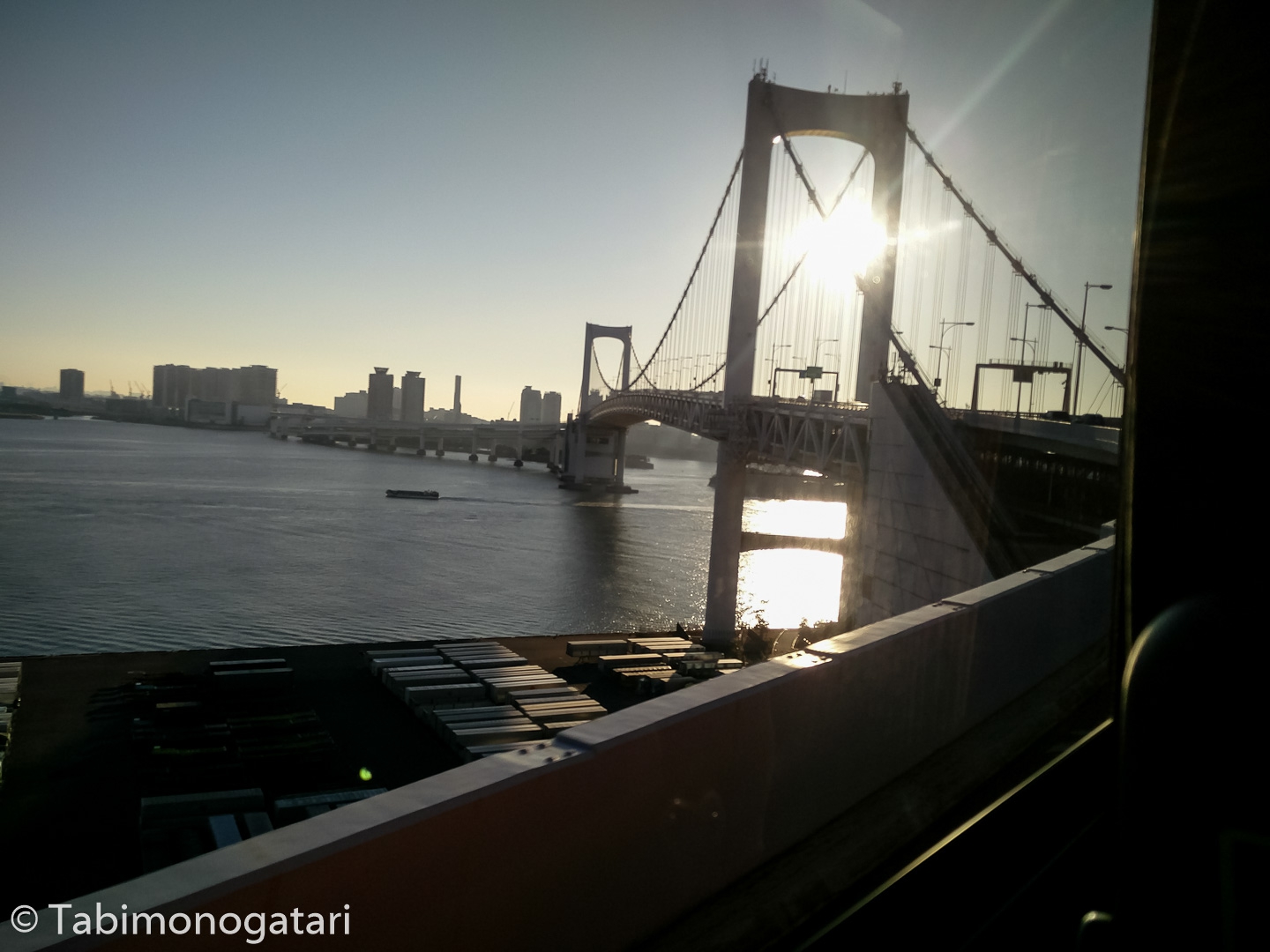 At Haneda airport I sent one of my two suitcases off to the hotel in Nagano I will stay at a week later. Sending parcels and even whole suitcases domestically with Yamato Kuroneko Takkyuubin is cheap and convenient. All you need to do is fill out a delivery slip and return it with the item to the counter at a combini or the airport. 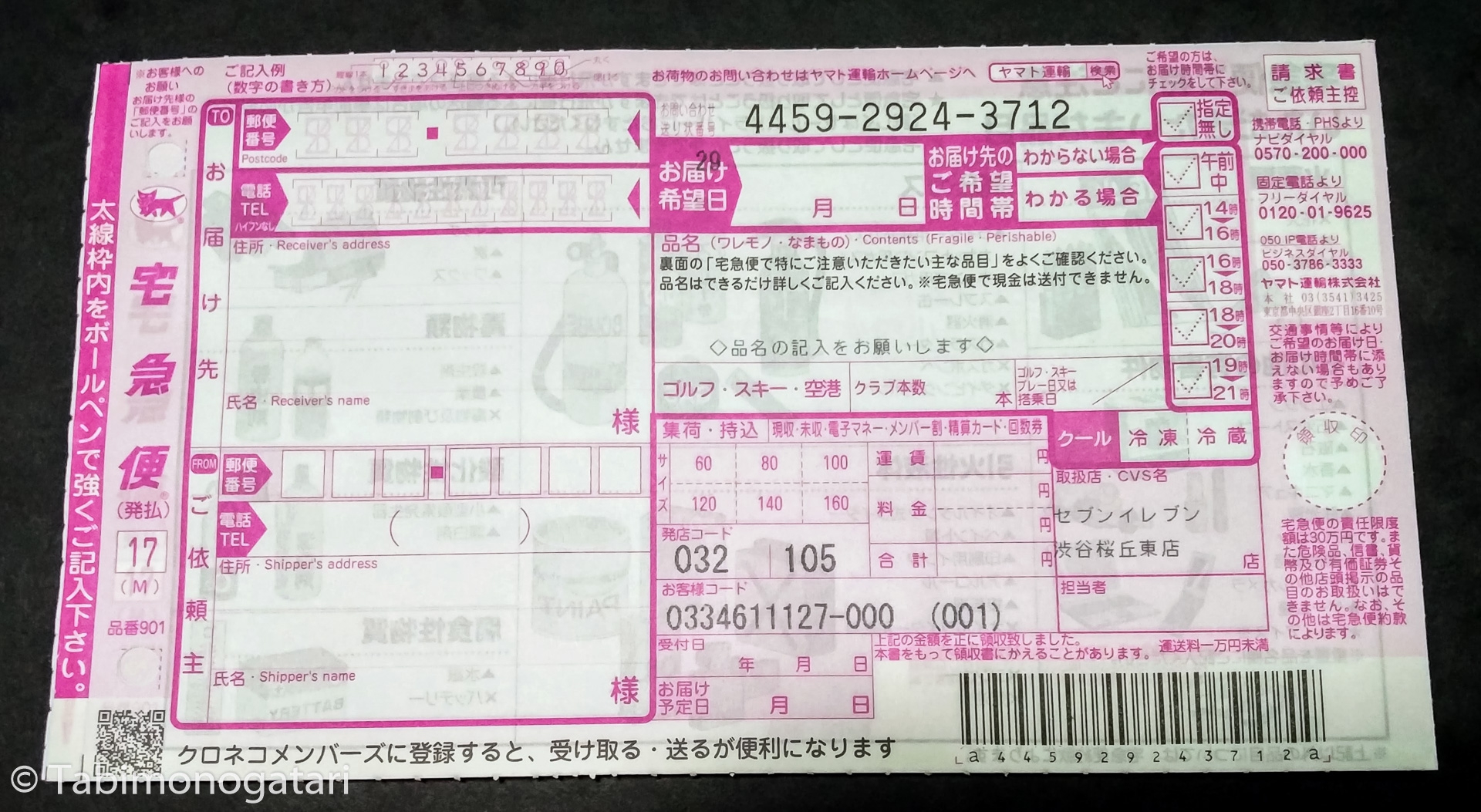 To catch the early flight I left Shibuya at 7:30, so I postponed breakfast until I arrived at the airport. I went with a classic Japanese breakfast with cooked salmon, a bowl of rice, miso soup and pickled vegetables. 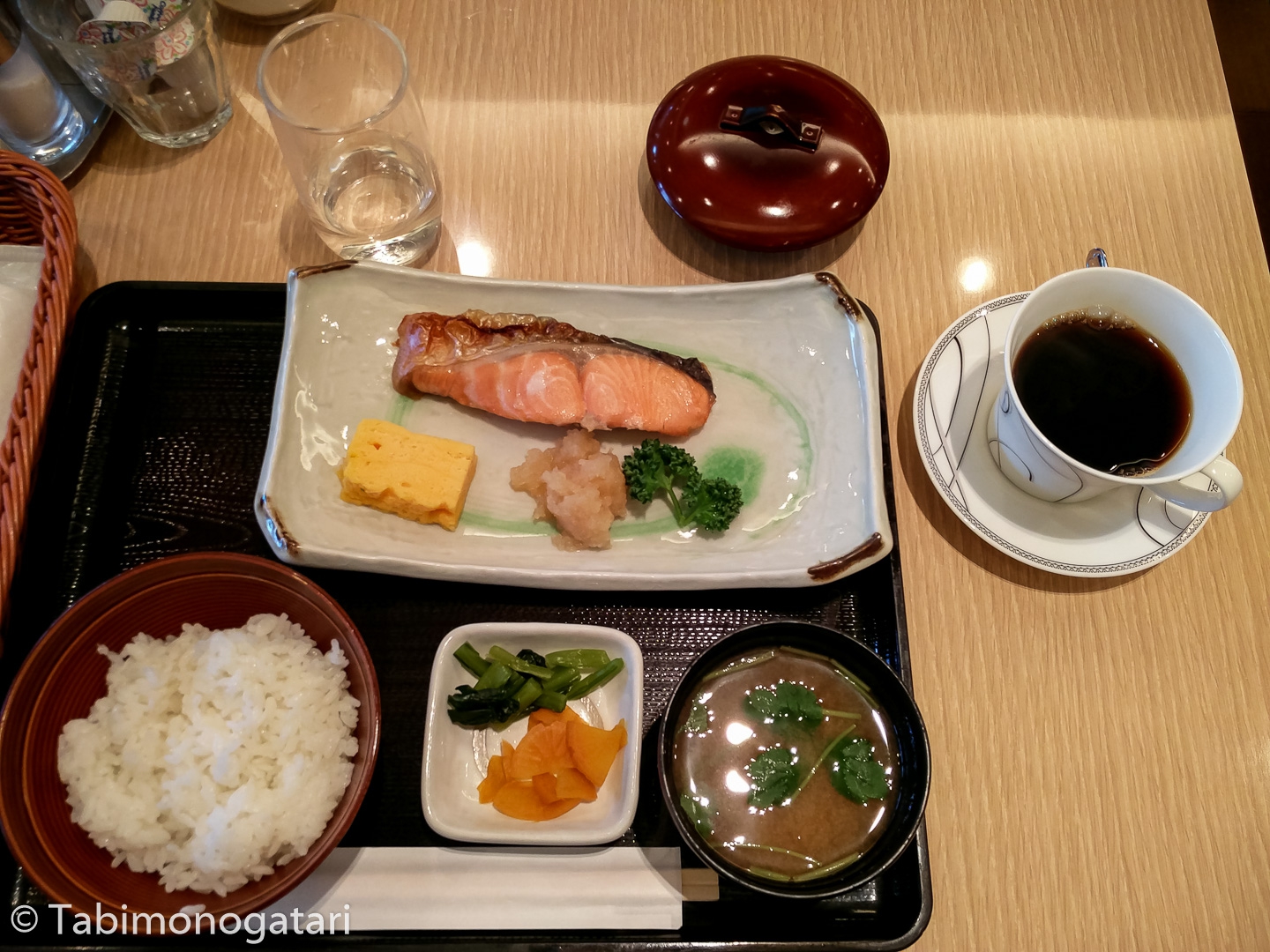 While checking in the person at the counter informed me that there is a chance that the flight has to return midway due to the weather conditions. Luckily, this did not happen and we arrived with a short delay at Chitose airport. 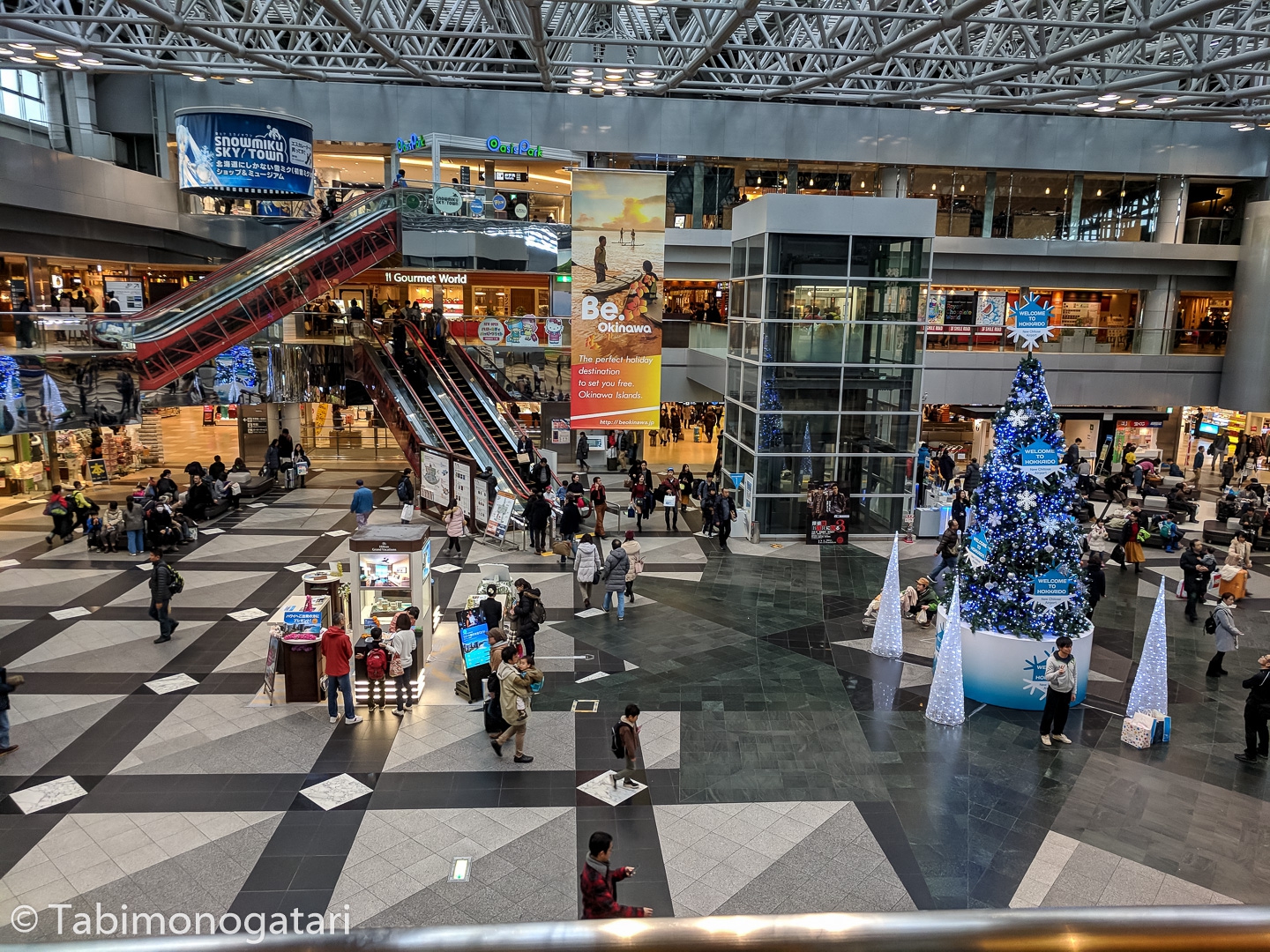 We arrived at the same time, even though we were on different flights and had lunch together. Sapporo is known for many culinary specialities, including Miso Ramen, Kaisendon and Jingisukan. One restaurant had a nice butadon dish on the menu which was limited to 50 servings a day, so I went ahead and ordered it. 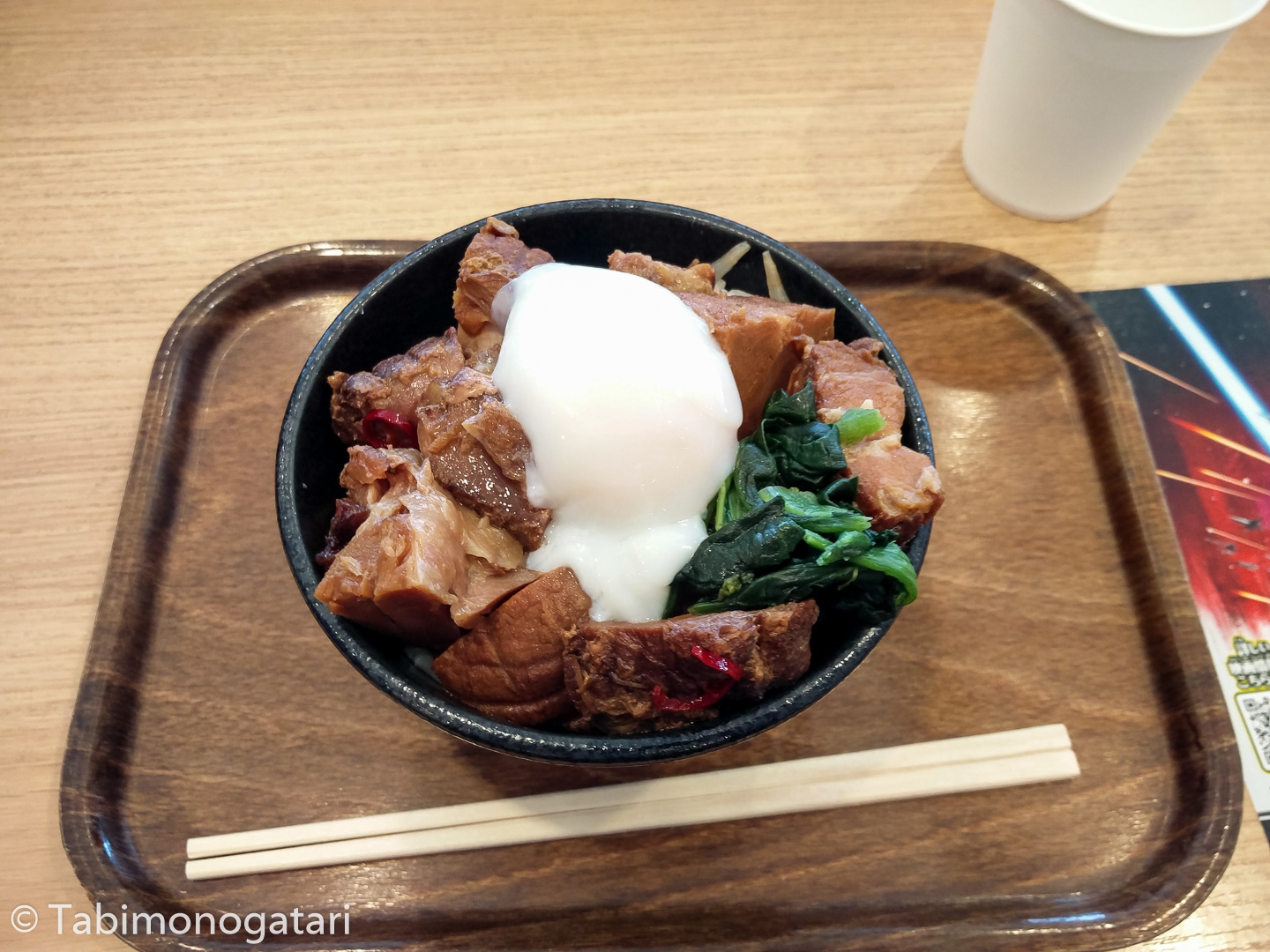 A bus took us from the airport to Niseko in four hours. During this time we drove through rural Hokkaido which was a great experience by itself. The northern island is sparsely populated so we saw next to no infrastructure on the way, only trees covered in snow. 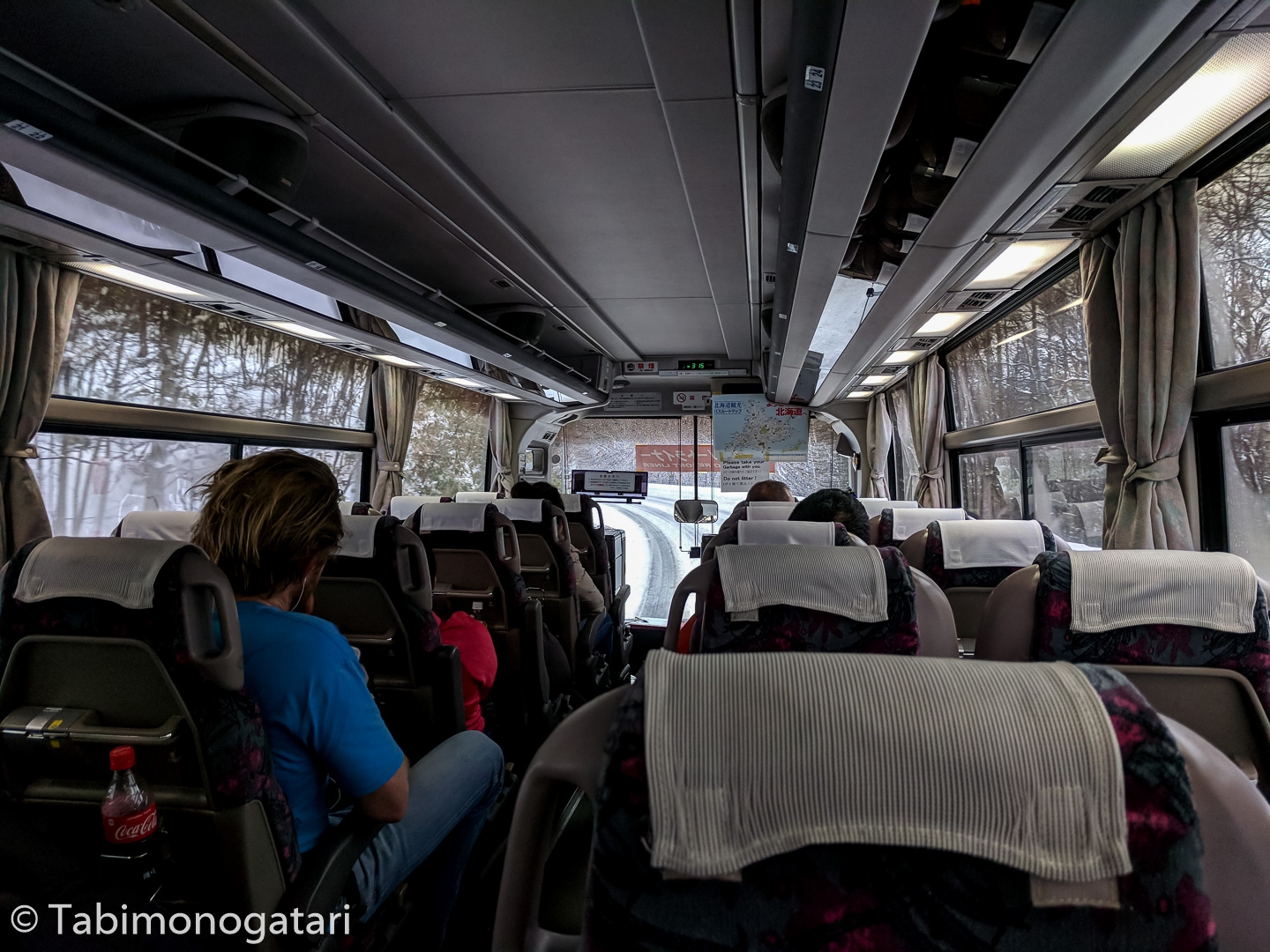 Midway we stopped at a service area, which called itself the Mushroom Kingdom. True to its name it sold many products made from mushrooms, to example miso soup, Japanese croquettes and onigiri. I ordered one of the croquettes and three dango skewers for a snack. 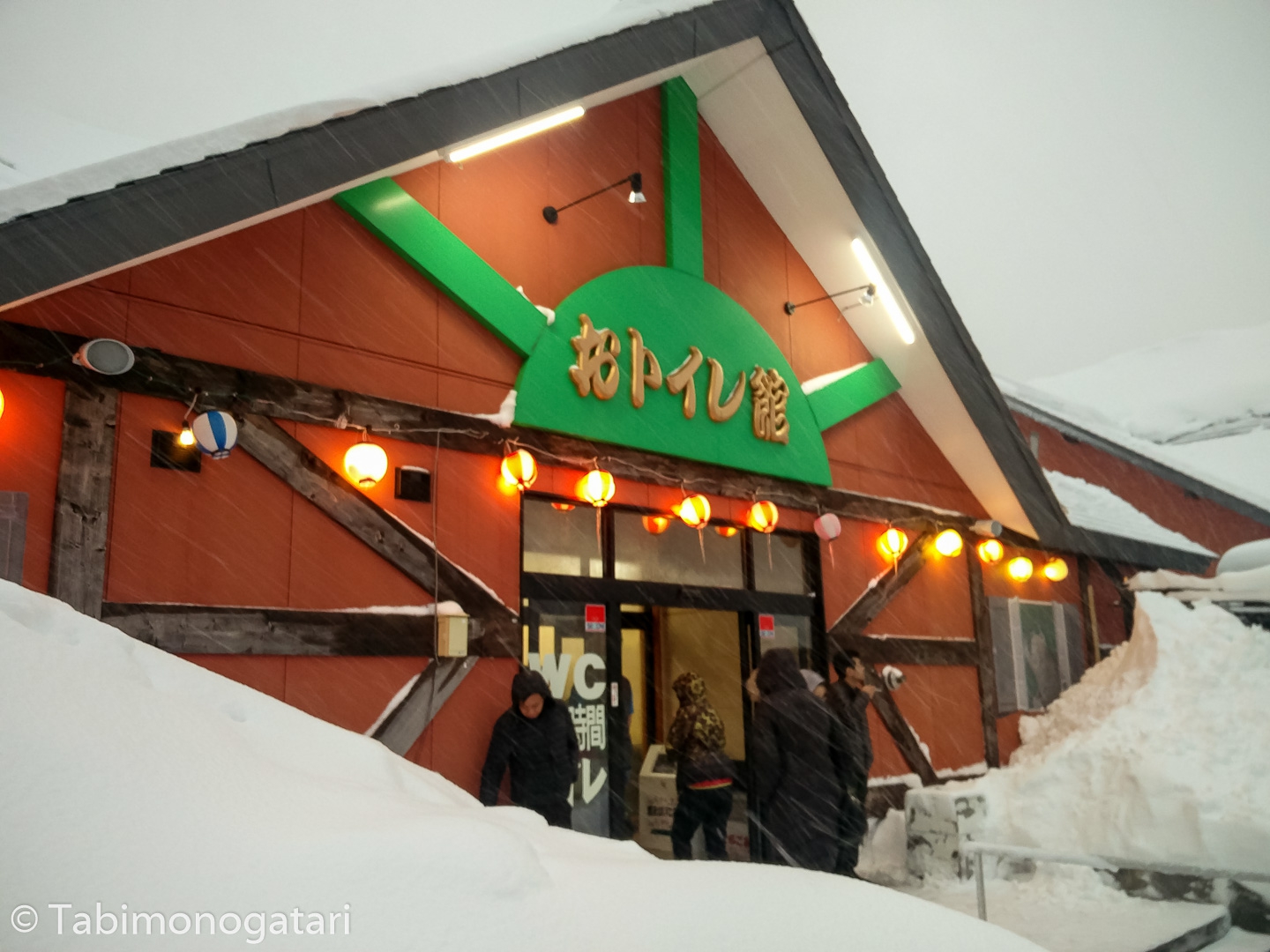 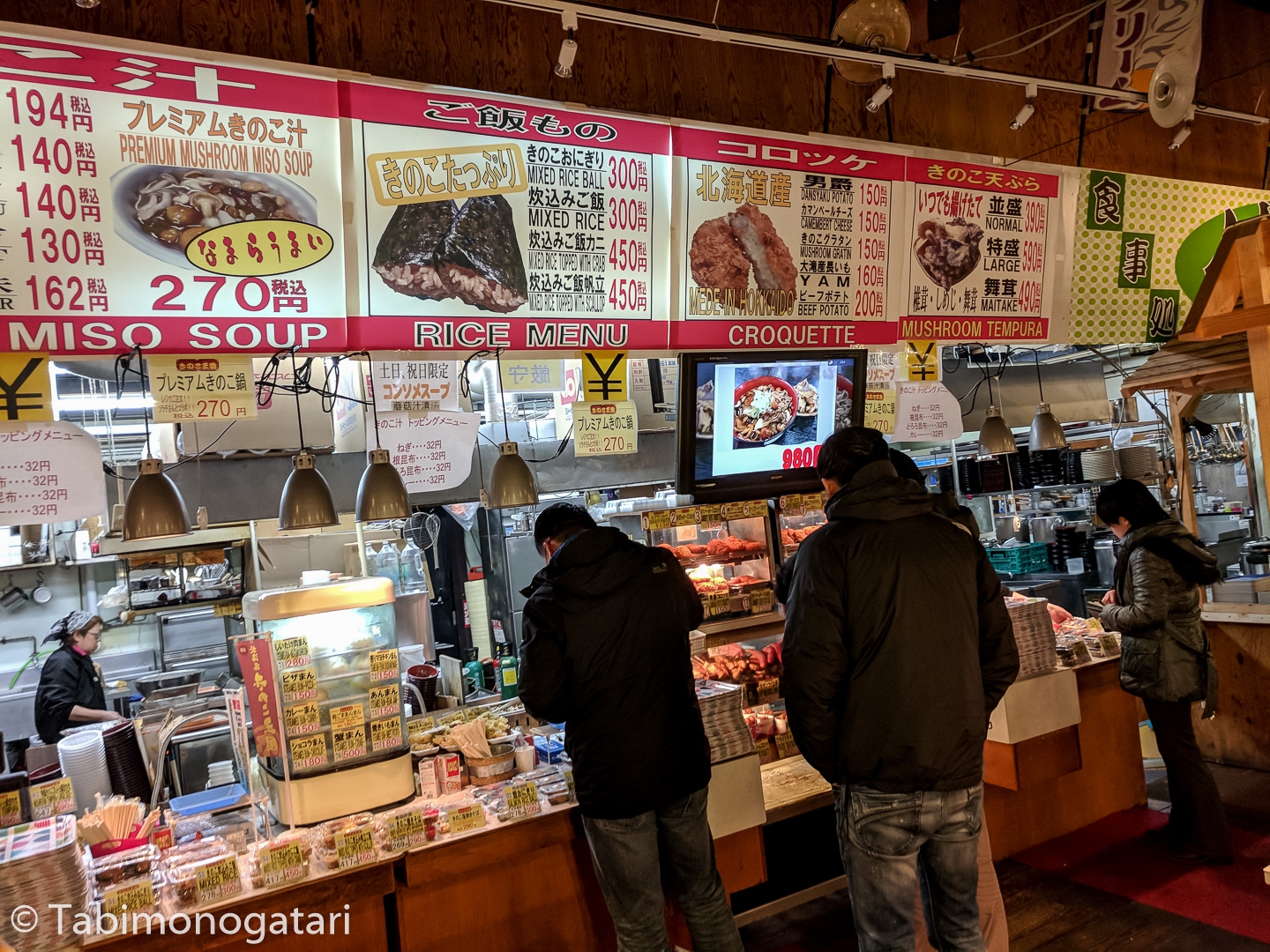 At 6 pm we arrived at our accomodation, the Niseko Backcountry Lodge, a cosy mountain lodge made out of wood. It’s a hostel with an international feel and lead by foreign staff. Many guests were from Australia, a country from where I rarely met people so far.

The lodge is located in the Moiwa resort, an often overlooked resort next to the famous Annupuri and Hirafu resorts which is popular for its untouched powder snow.

To warm up we walked a few minutes to a nearby hotel to enjoy the first Onsen visit of the year. Soaking in the outside bath for almost two hours got rid of all the fatigue and soreness I experienced until that point.

Back at the lodge we had dinner at the associated Izakaya where we chatted with a Bulgarian who lives in London. 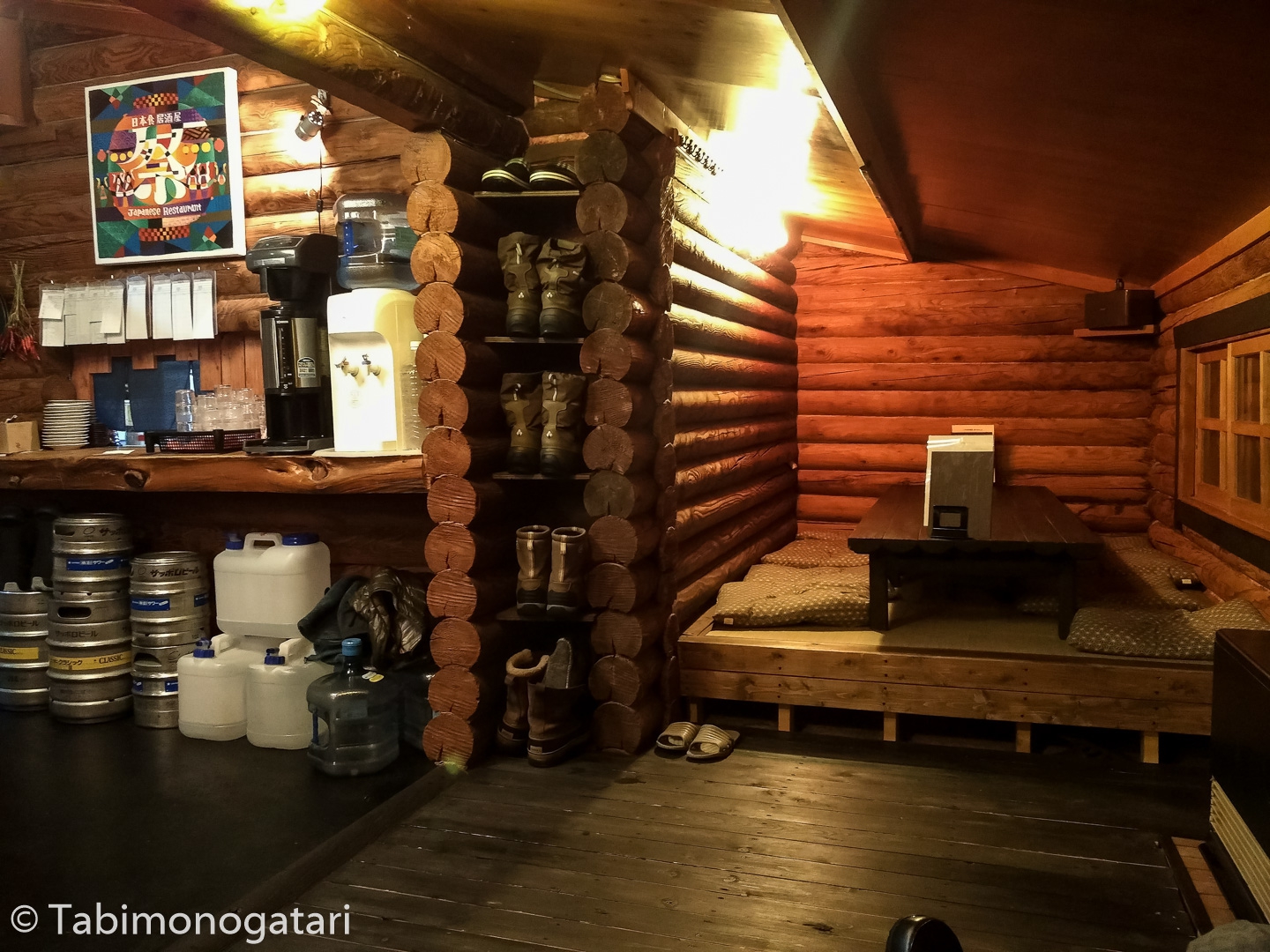 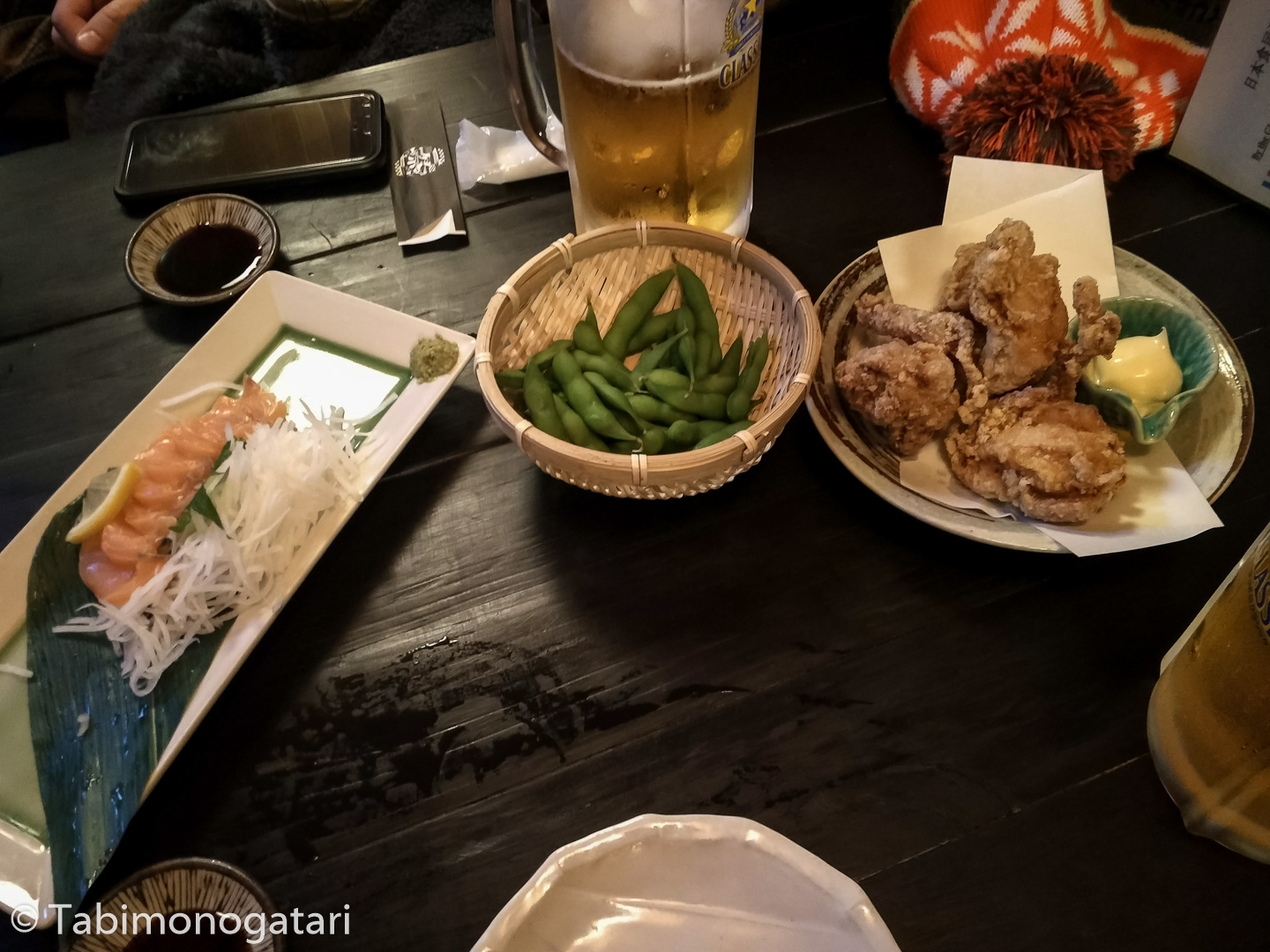 Skiing through the powder

The next morning we picked up our ski equipment we ordered at a nearby store. To save space I also rented ski clothing which was of great quality. For two days I payed 11000 yen for ski, boots, poles, jacked, pants, beanie and gloves.

We decided to visit Annupuri for the first day which was accessible by a shuttle bus in a few minutes. With the one day ski pass for 5000 yen in our pocket we boarded the gondola and went to the top. 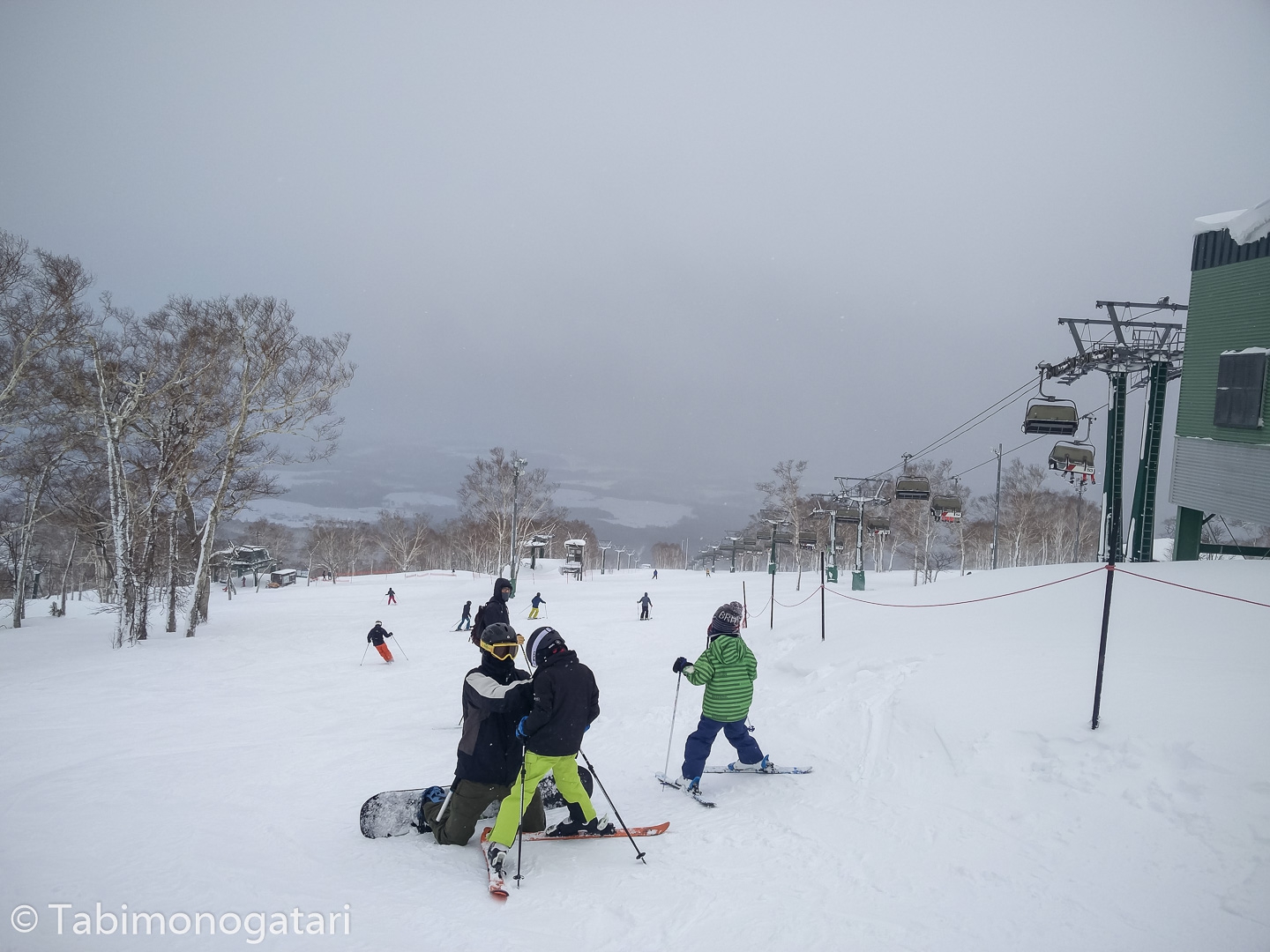 From the first moment on I felt the great quality of the powder snow everybody talks about. It was so fluffy, light and riding over it was very smooth. It snowed for most of the day, so visibility was rather poor. Regardless we had a great time skiing on track and backcountry. 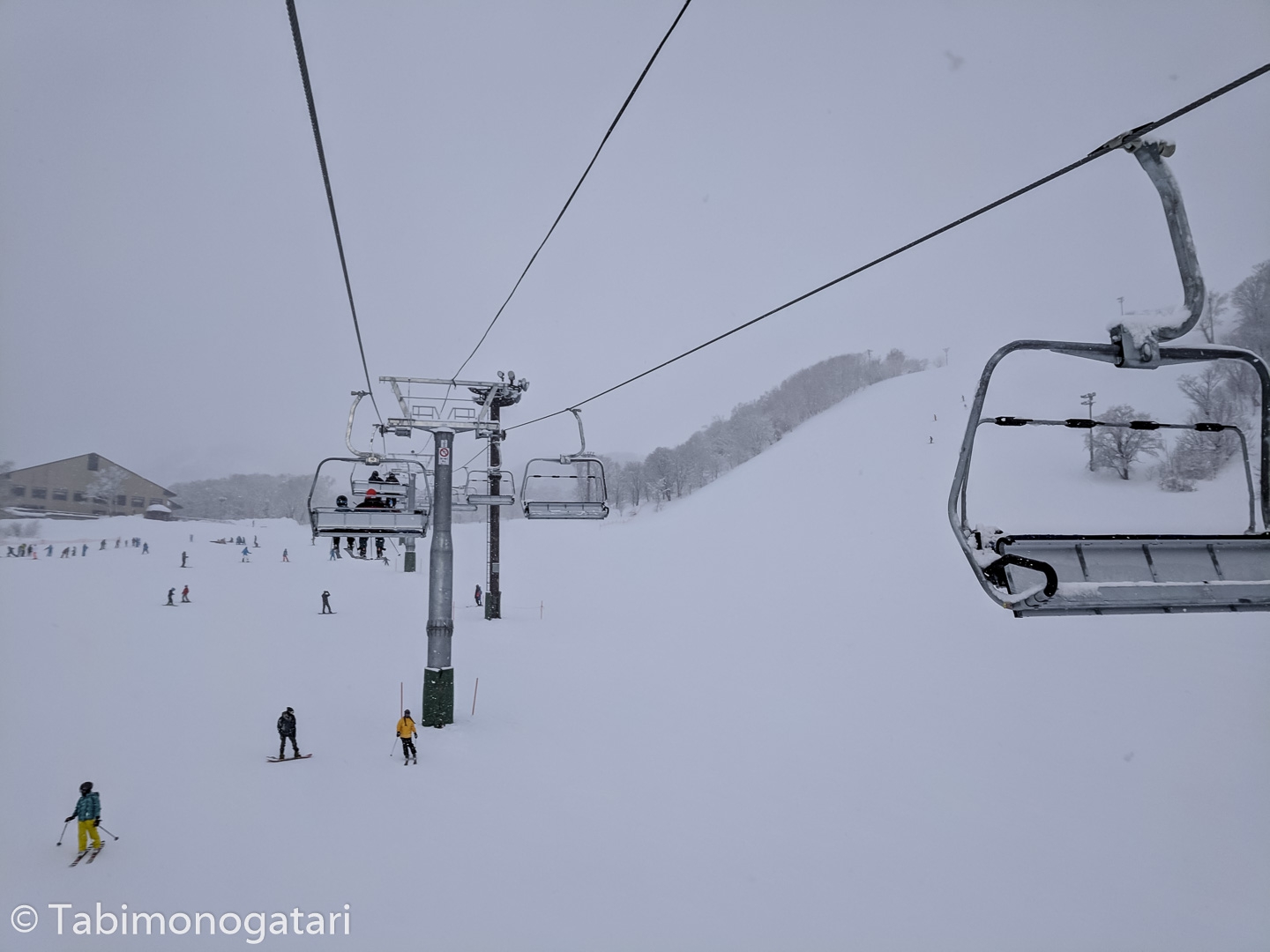 Some things are different when skiing in Japan. The chair lifts are rather basic by the Swiss standards I am used to — they have no foot rests, sometimes they even lack a safety bar. Here, there are no marked trails but rather wide tracks which were only marked off-limits when it was dangerous to stray apart too much. Because of the steady snowfall the powder snow replenished all the time and the tracks of the riders disappeared in no time.

For lunch I had Tempura Soba, which hit the spot during the cold weather. 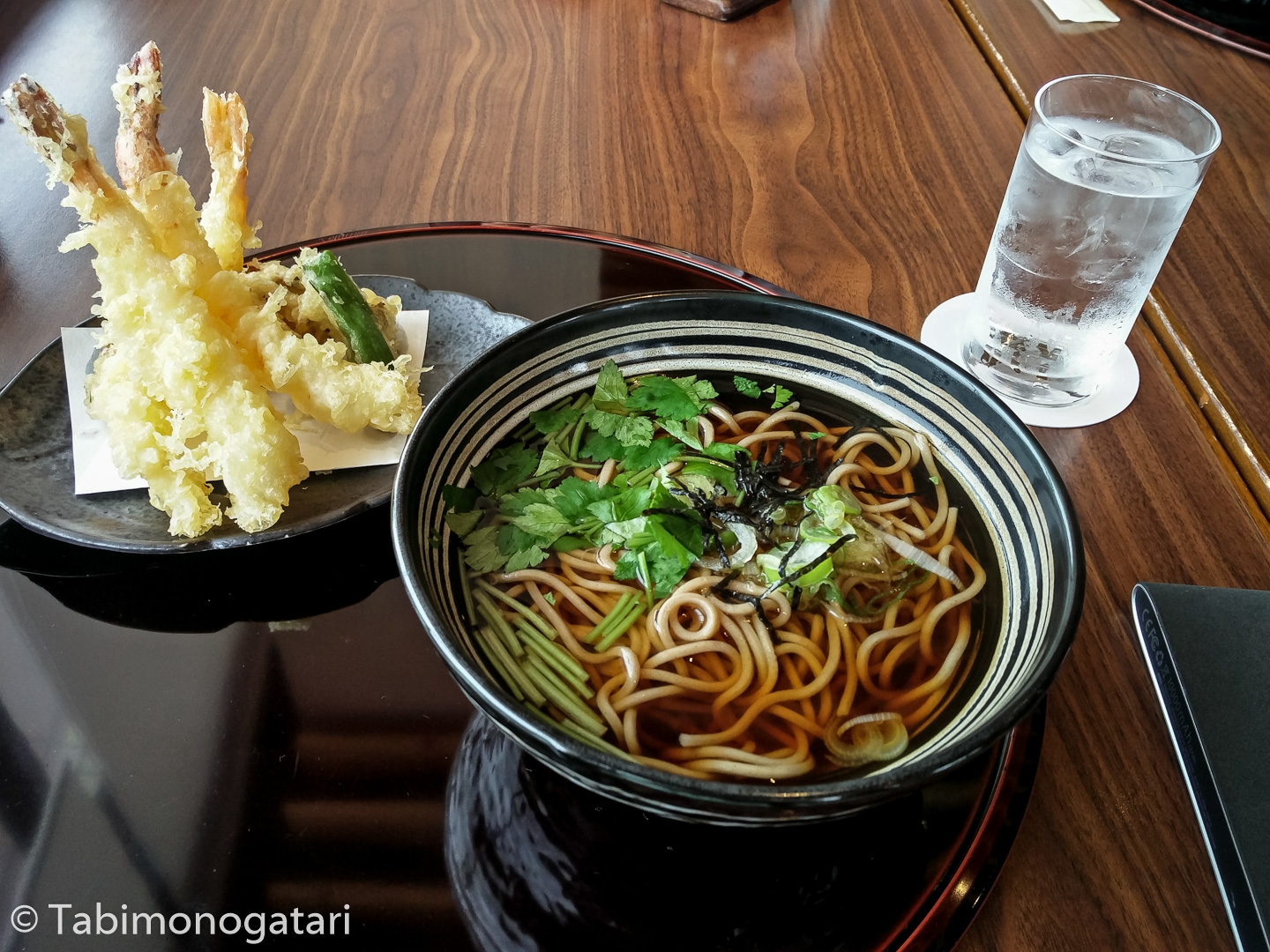 Most of the lifts started to close by 15:30, and we felt quite exhausted by this time, too, so we left soon after. 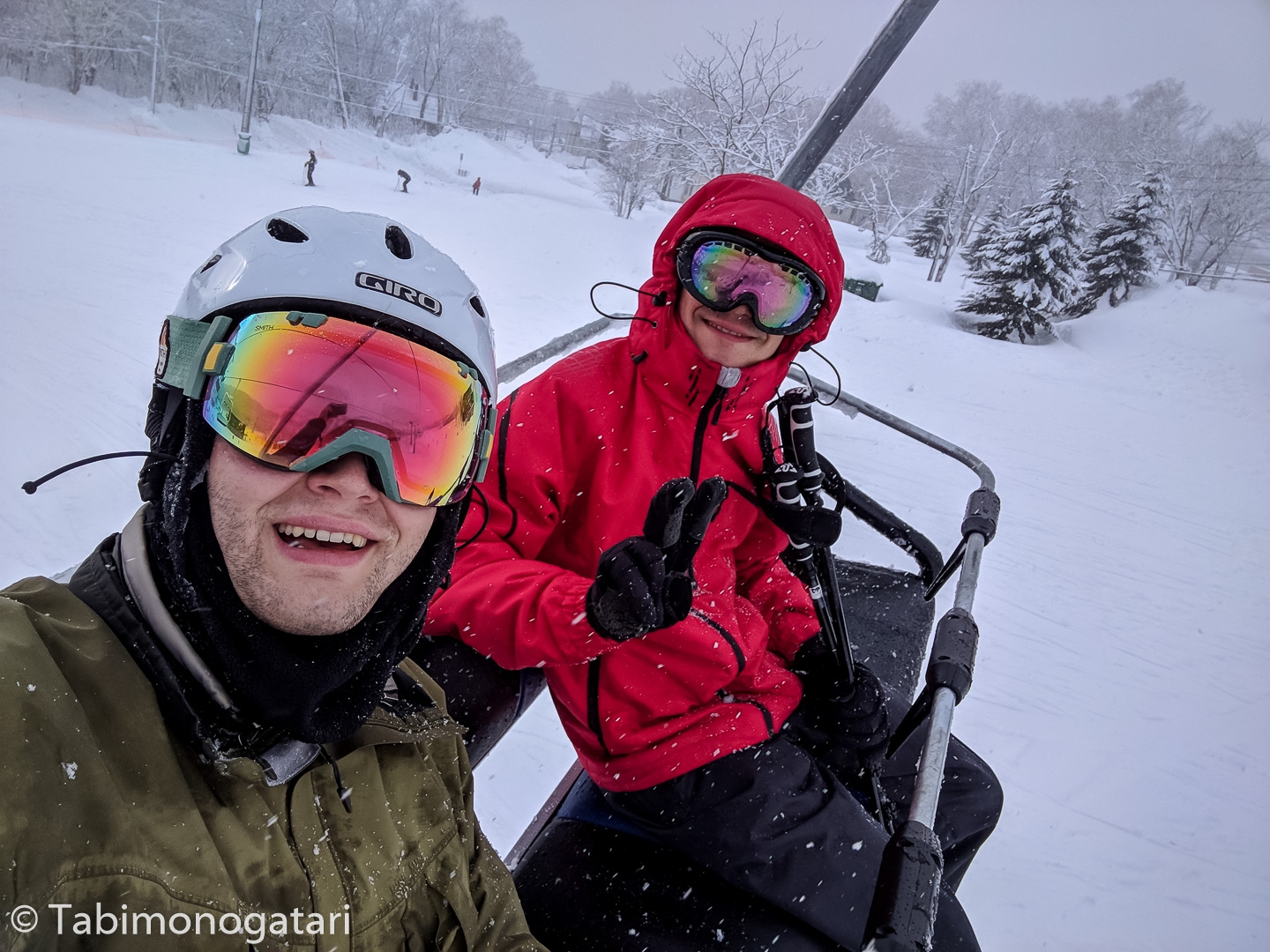 We finished up the day with another Onsen trip, this time at a different place which had a even more gorgeous outside bath. At our house-izakaya we had butter-corn which was a great local speciality to try. Tomorrow we want to ski in Hirafu — I’m excited how it will be like. 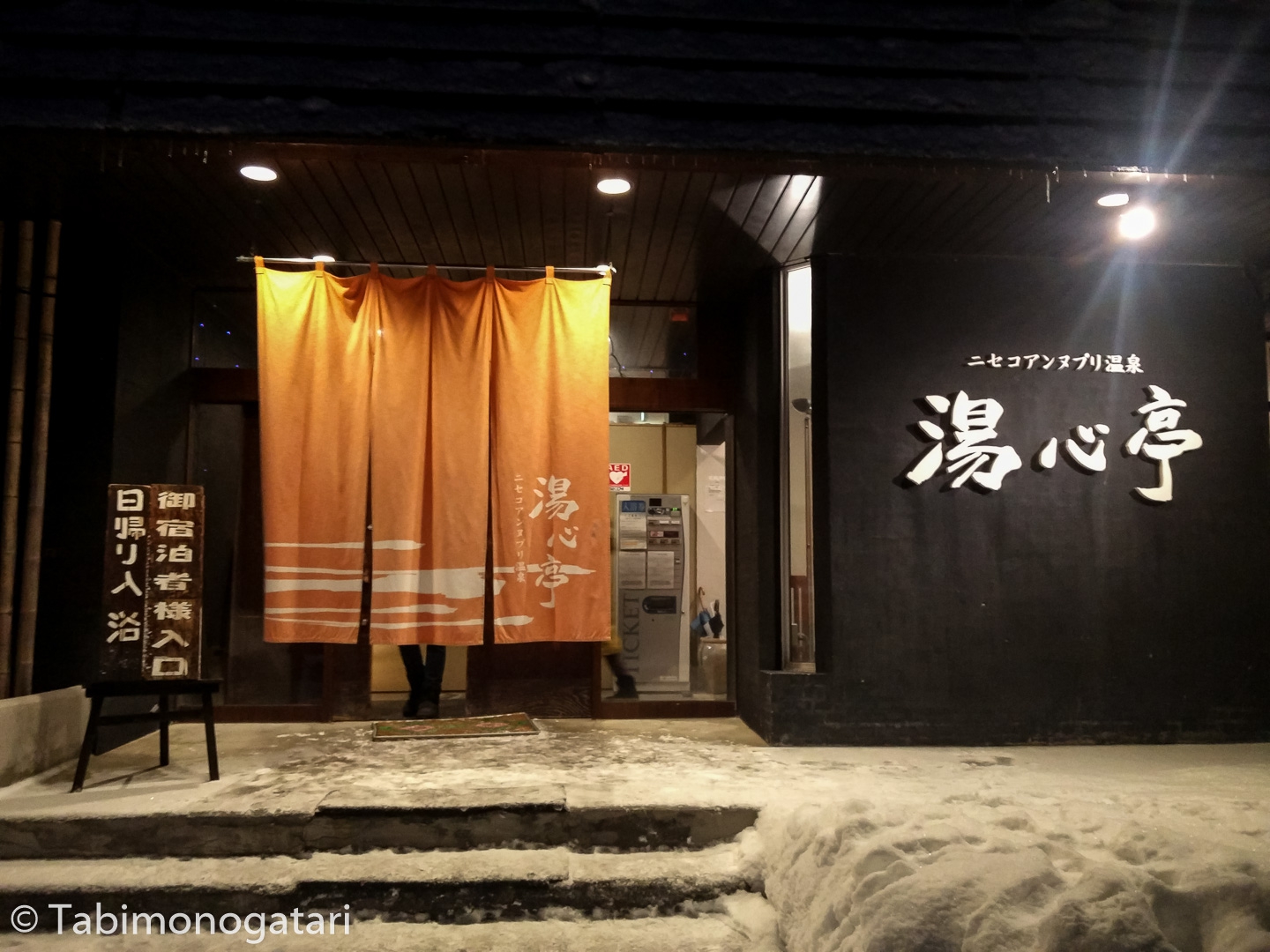