The last two days we were skiing in the biggest resort of Niseko and I eventually left Hokkaido via Sapporo.

On our second ski day we decided to go the extra mile and ski in the Grand Hirafu Resort, which is the biggest and most famous resort in the Niseko area. A shuttle bus connected Moiwa with Hirafu, so we could easily access the resort in half an hour. 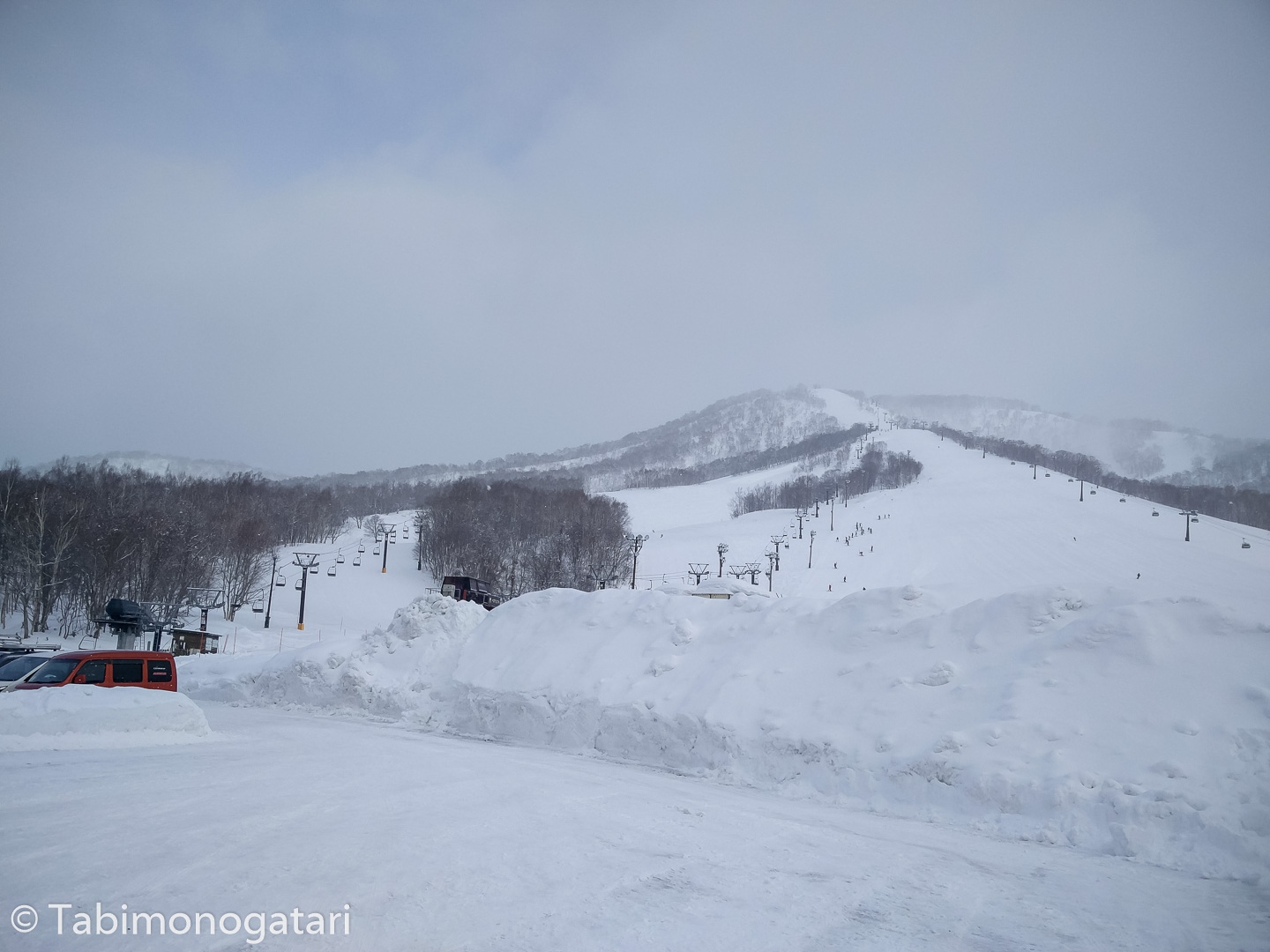 Once there, we bought an one-day pass for 6000 yen and hopped on the first chair lift. The snow was of great quality again while the visibility was likewise medium to poor. In the morning the wind was not strong, so we enjoyed some great runs on both the groomed slopes and also some back-country routes. All signs and announcements were bilingual in response to the popularity towards foreign visitors. 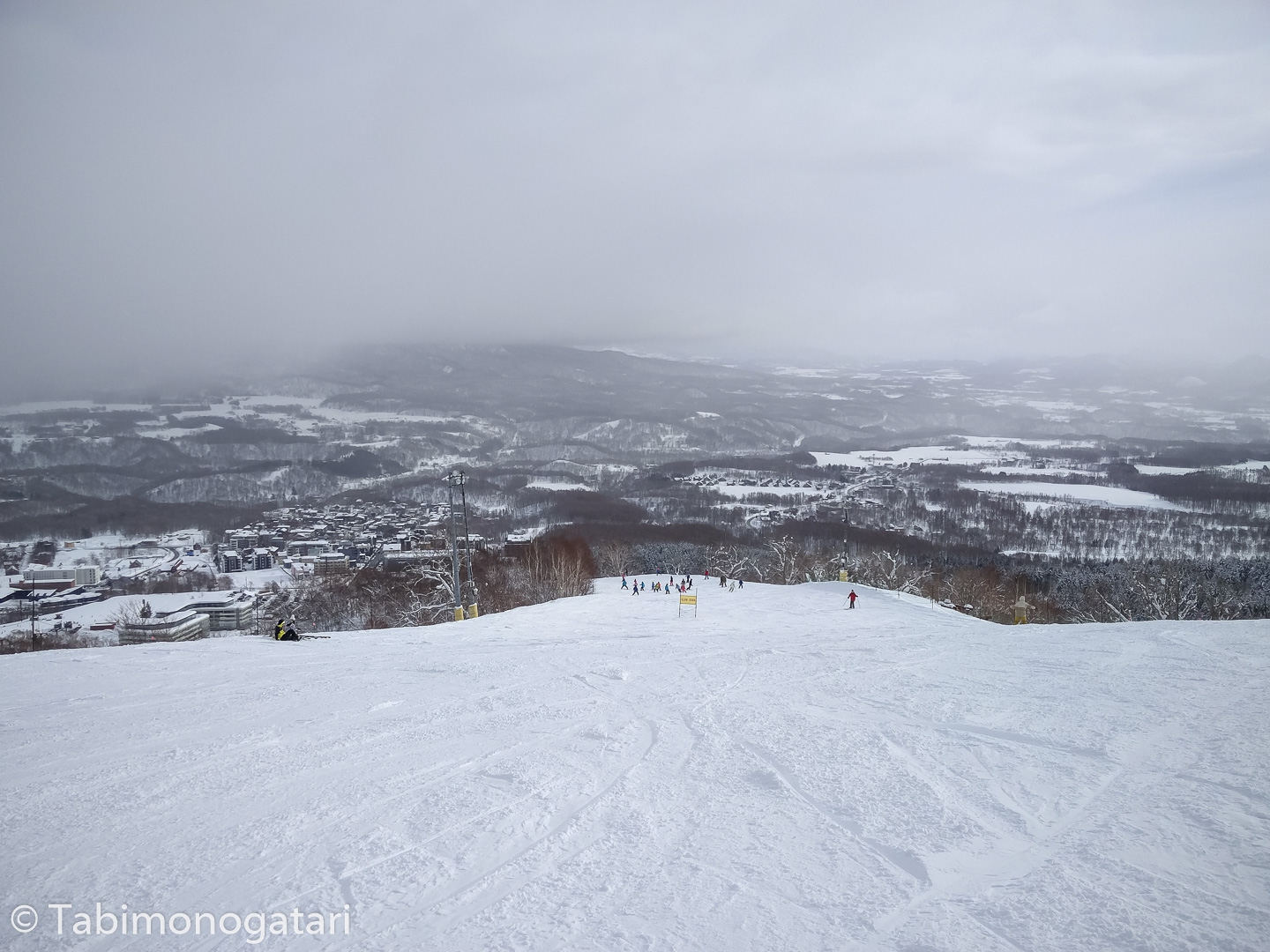 At times the wind blew strong and the visibility became low, which made skiing a bit more difficult. For lunch we settled at the Alpen Hotel at the base station where we both ordered Katsu Kare which gave us the energy we needed for the afternoon. 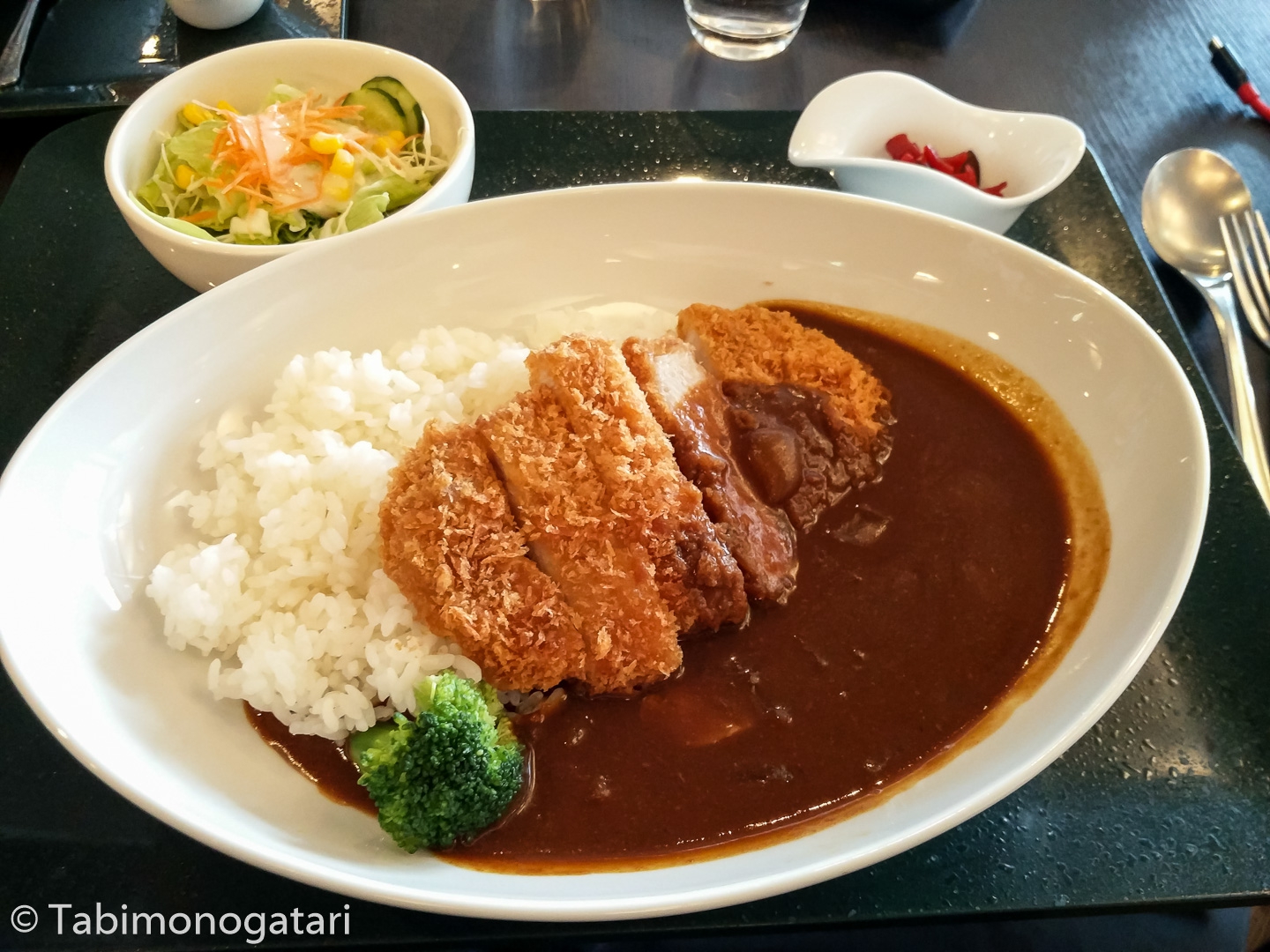 Connected to Hirafu is the smaller Hanazono Resort we could also access with our ski pass. The combined resorts offer a diverse selection of routes in regards to terrain and difficulty. Even though there were more riders, the wide routes allowed us to ride without difficulties.

At half past three many lifts began to close, and the wind picked up. We decided to stay for one more hour and rode the last open lift a few more times which was running until the evening. Because some areas are opened to night skiing, floodlights illuminated the marked slopes. Still, the visibility was so low that we needed to watch our speed.

In conclusion, all ski areas we visited offered great conditions and a large and diverse selection of routes. In my opinion Niseko is well suited for both beginners and advances skiers and snowboarders. 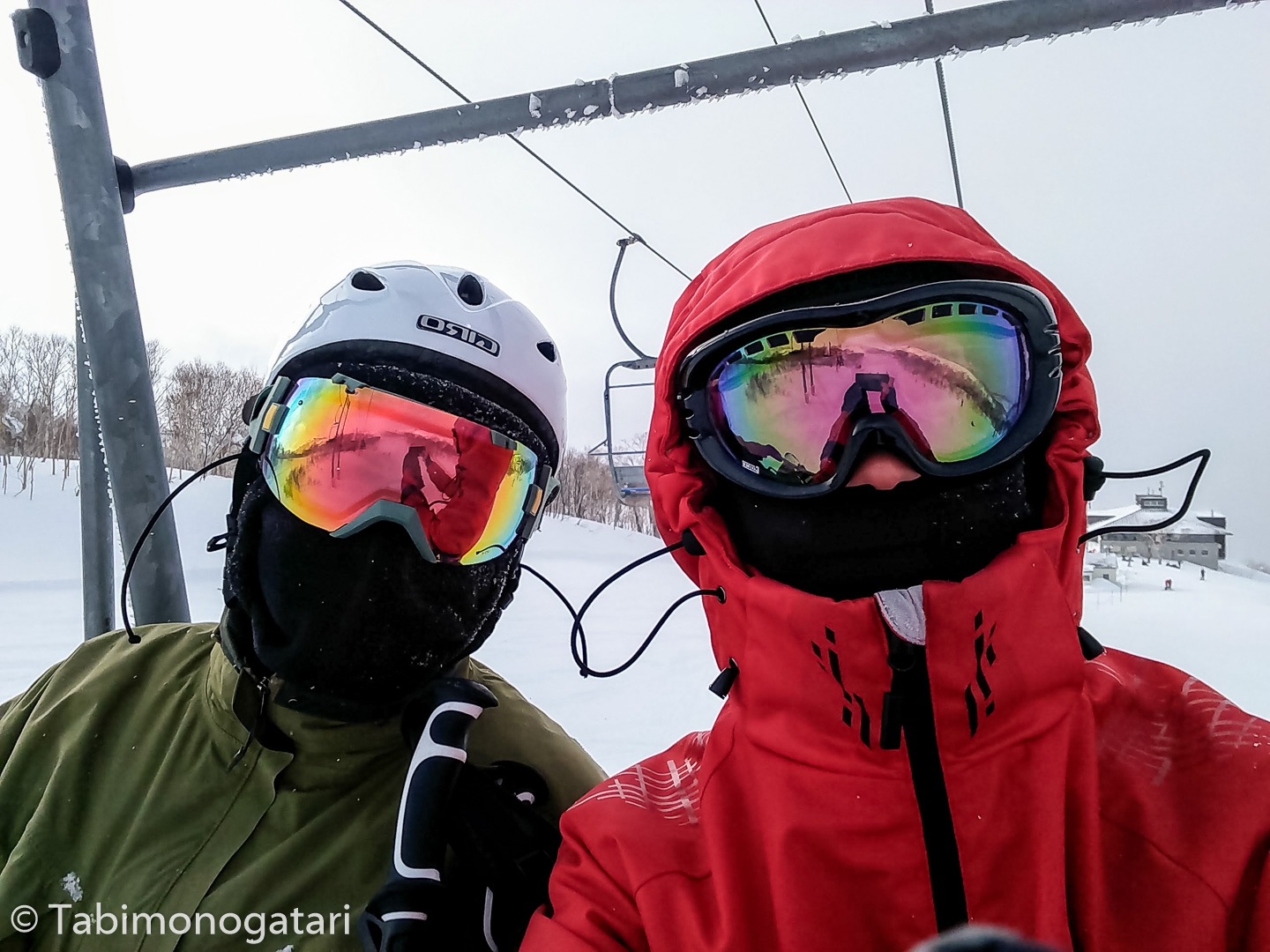 While waiting at the bus stop, we met a group of Swiss riders who stayed at the same lodge. Coincidentally, they were also ETH alumni from Zurich who visited Niseko for the first time.

In the evening we enjoyed our now established après ski ritual, a bath in the local Onsen, followed by drinks at our Izakaya. This time we sat at the bar and had a fun conversation with the bar keeper about local dialects, baseball and liquor while munching on tebasaki gyoza and jingisukan. I also had the chance to try a sip of Suntory’s Yamazaki whiskey which tasted mellow with a sweet aftertaste, what I preferred to the last Scottish whiskey I had a while ago.

A day in Sapporo

The next morning, I packed the last remaining things into my suitcase, returned the ski equipment and said goodbye to Casey, who stayed one more day. 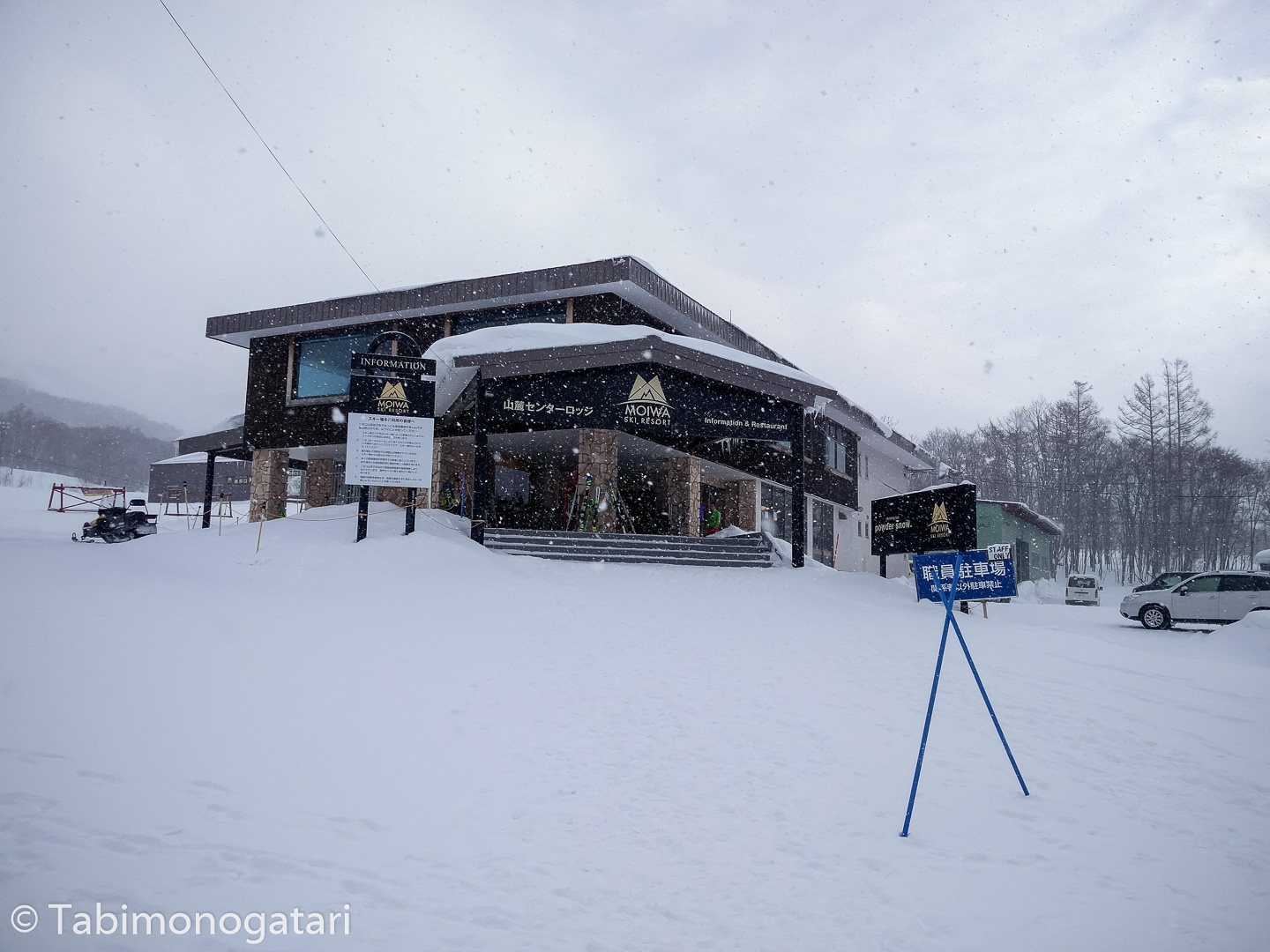 Take a look at this pictures. The snow piled up several meters and it kept snowing every day. 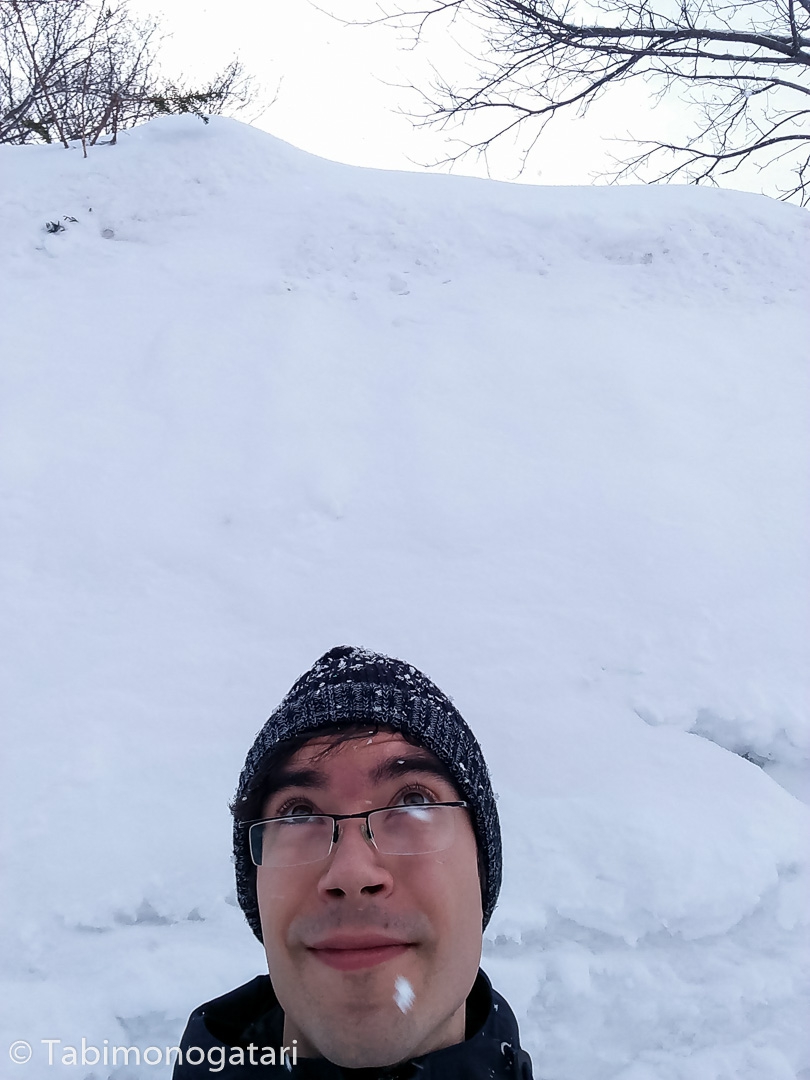 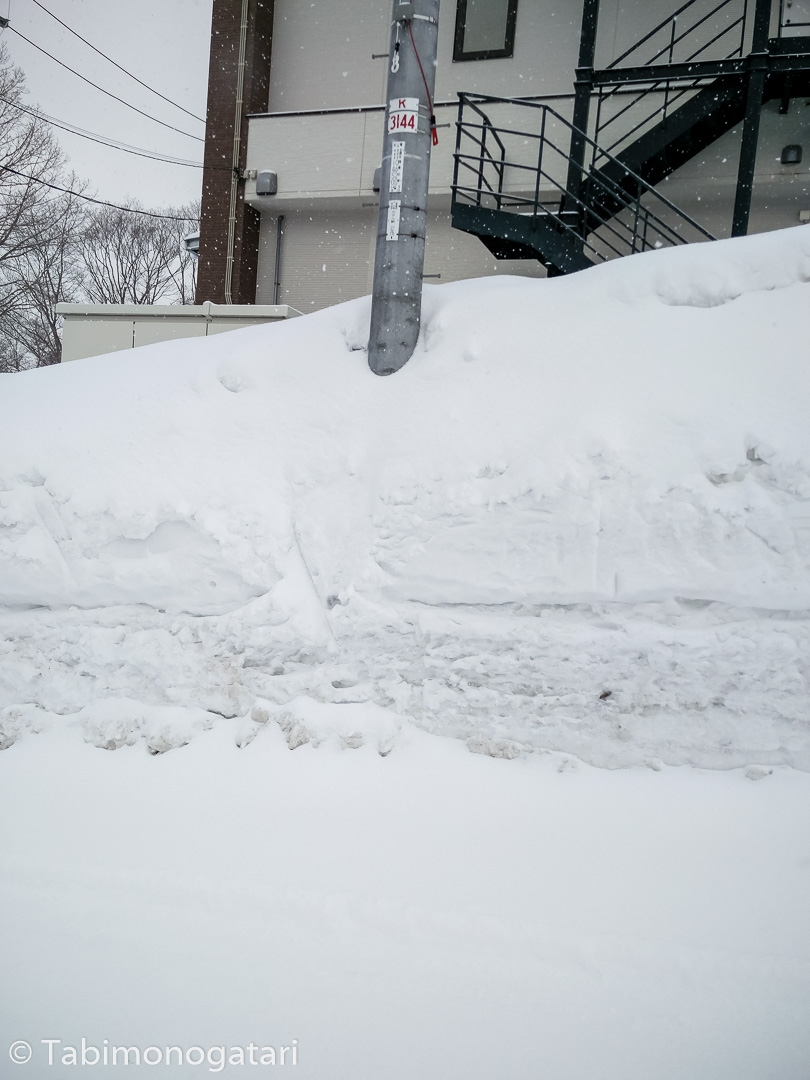 The same bus company as before brought me back to Sapporo City where I planned to stay the day until I would take a plane back to Tokyo late in the evening.

For four hours we navigated through the snowy landscape of rural Hokkaido while it was gently snowing. After around two hours we made a brief stop at a service area where I could try the local meibutsu (famous item) of Boyonakayama which was age-jaga or fried potato on a stick. 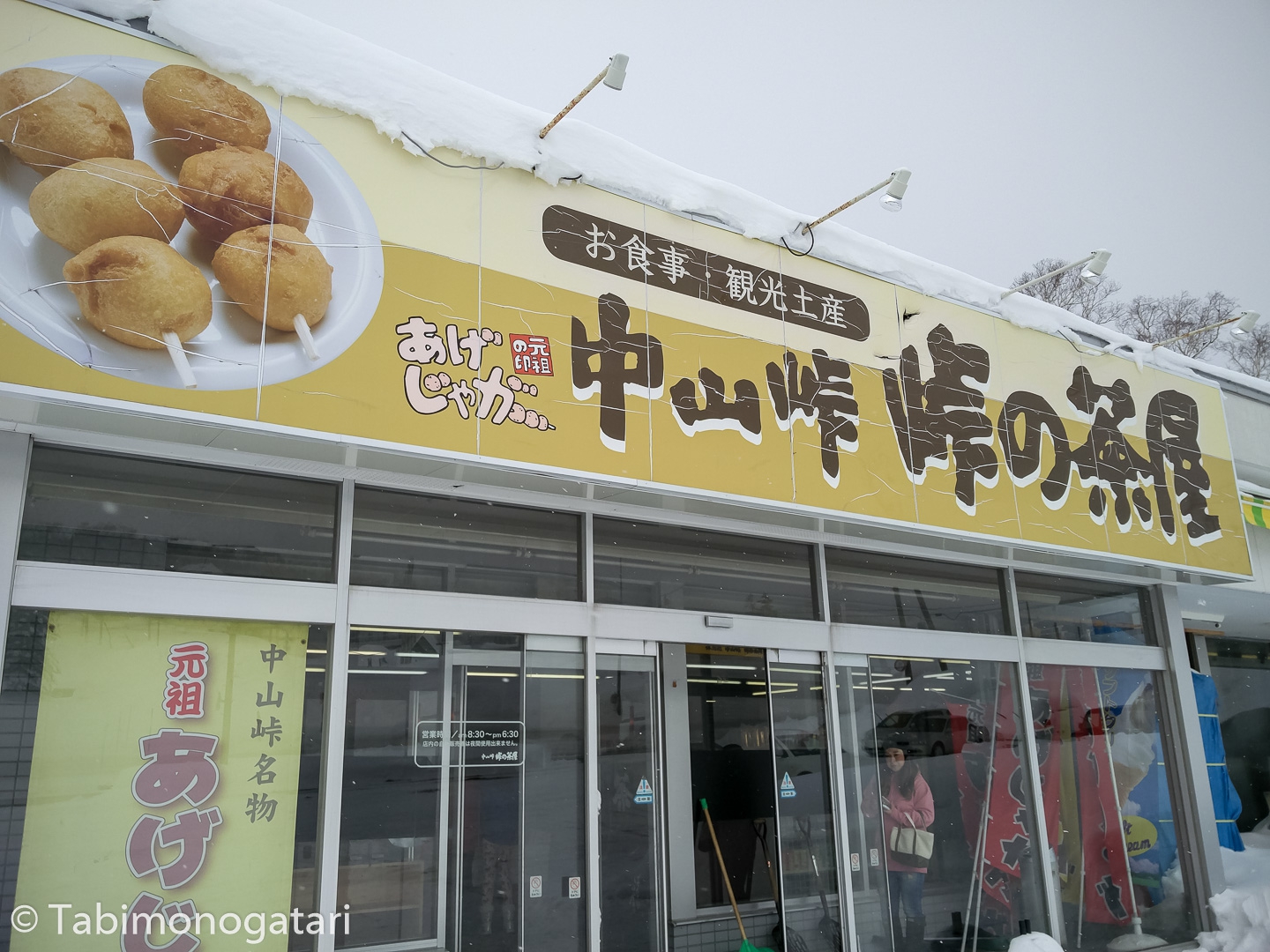 Around noon we arrived at Sapporo station. I have visited the city before in Summer 2016, so it was great to see the city in white this time.

Since I expected my large suitcase not to fit into the coin lockers I consulted the website ecbo cloak which offers luggage storage at selected restaurants and businesses in major cities. Choosing the closest place, I found the business well hidden inside an office building. When I ringed their bell and explained why I was here, a kind salaryman took care of my luggage, seemingly aware of my storage request.

Freed of the large suitcase I took shelter from the heavy snowfall in the underground. Between Sapporo Station and Suzukino exists a kilometer-long underground passage with many shops and exits to every street crossing. This way, the local people can navigate the city without needing to bear the severe snow. Indeed, the passage was very crowded while above ground there were not a lot of people.

For lunch I visited Garaku, a restaurant known of its signature dish Soup Curry, another Hokkaido specialty. For me a long queue of Japanese people at the door is a good sign to eat at a restaurant. After waiting for half an hour, I could enter and order a serving together with a local beer from Otaru. 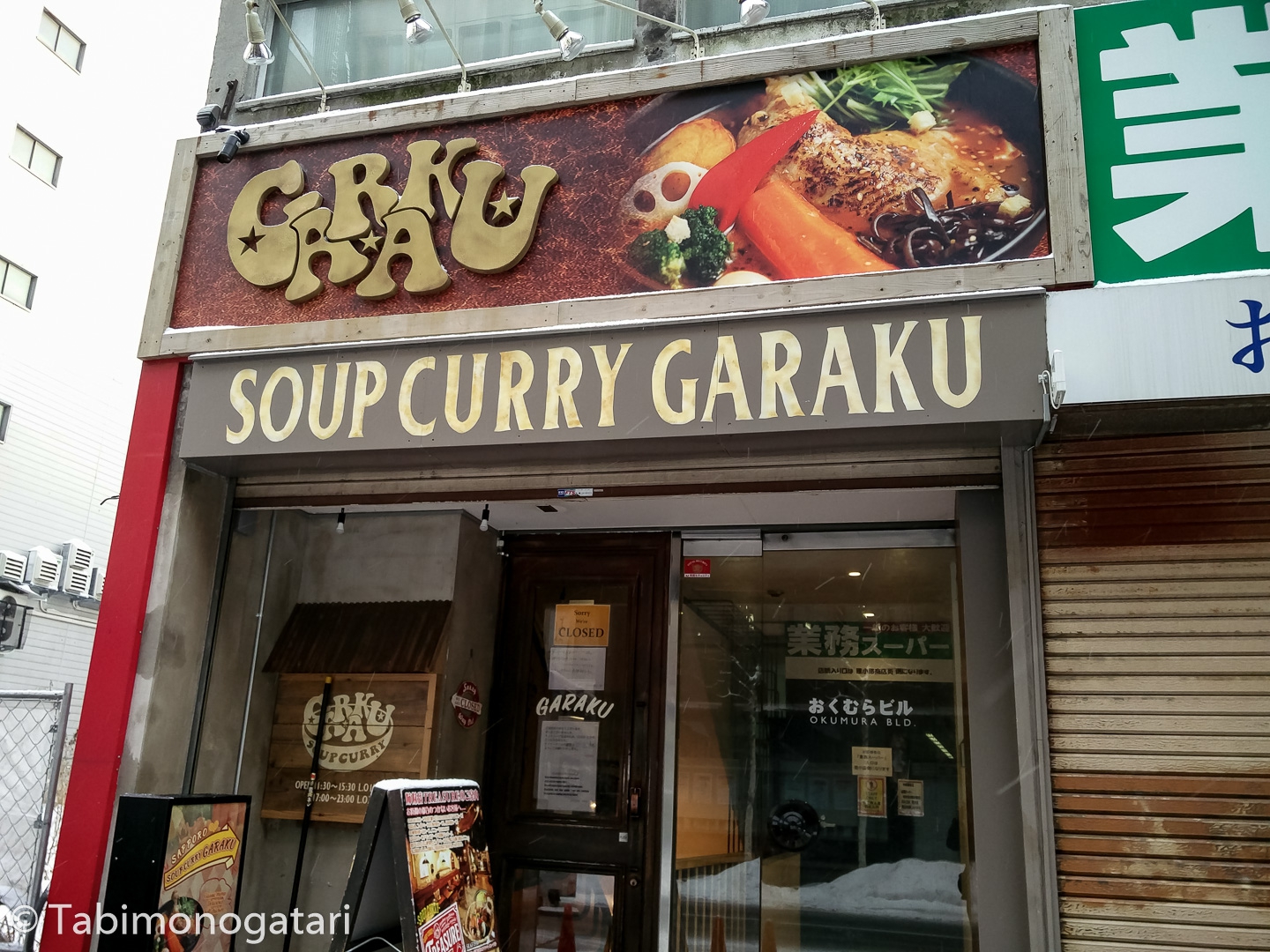 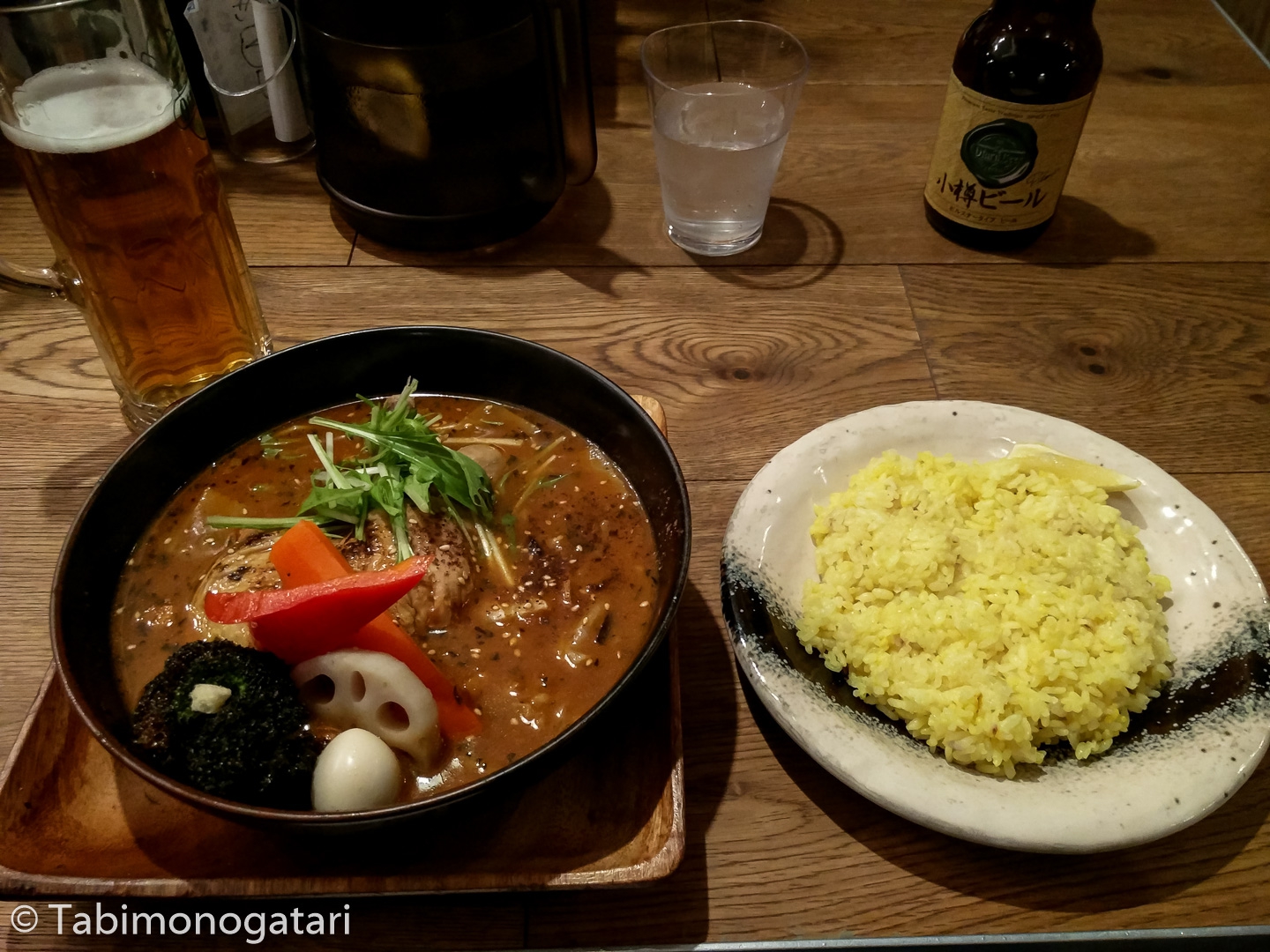 The snow has stopped falling by this time, promoting me to ascend the TV Tower at the Western end of Odori Park.

From the observation platform one has a 360° view over the city and the park. I imagine the night view must be wonderful, as well. 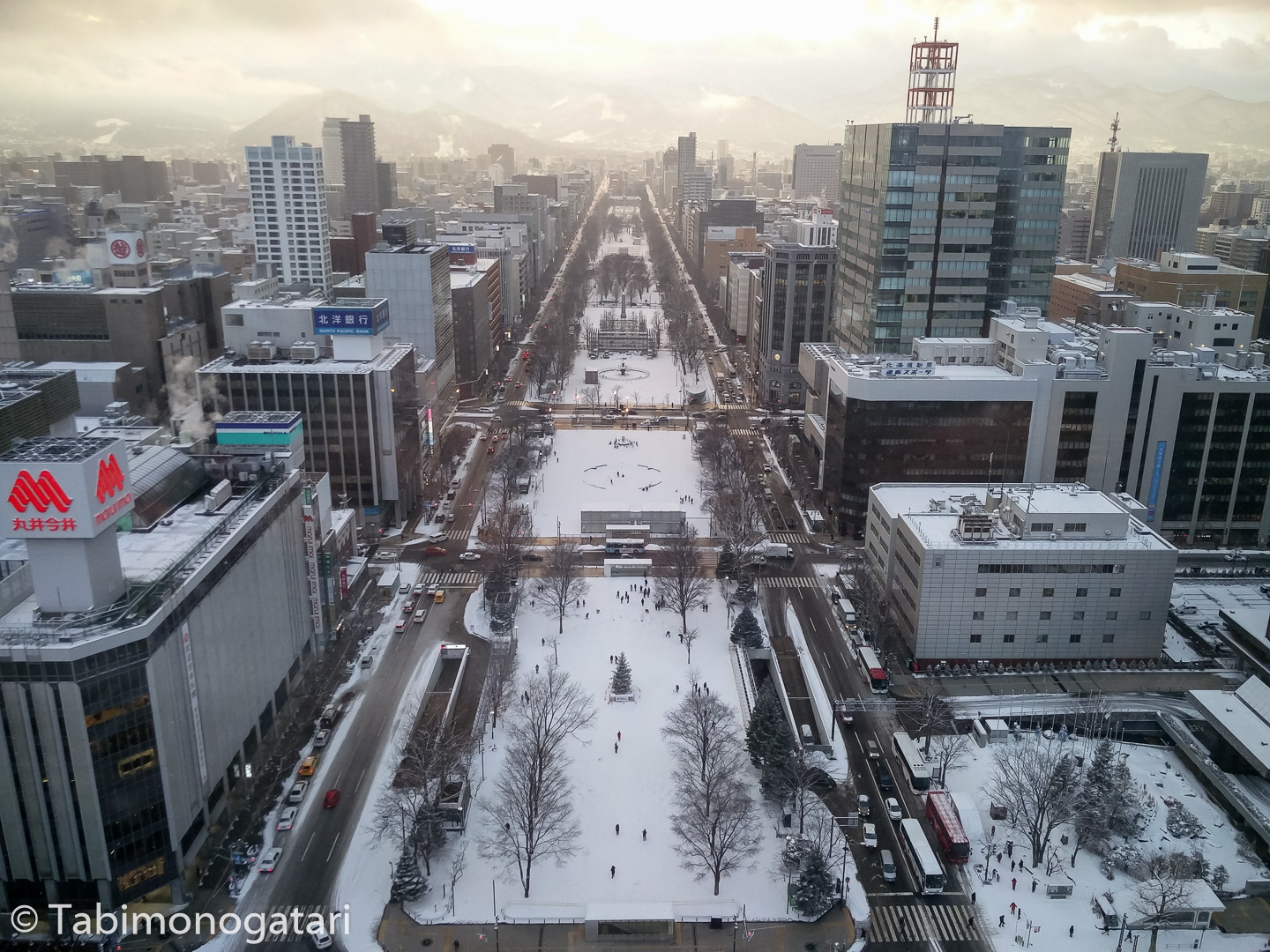 Next, I returned to the station and strolled through the different department stores. The amount of shops distributed over three connected buildings was immeasurable, each inviting with scents and promotions.

In the evening I returned to Suzukino to pay the Ramen Yokocho a visit, a narrow alley filled with different Ramen stalls serving Sapporo style Miso Ramen. The butter corn-topped Miso Ramen with a half-boiled egg was a satisfying last meal in Hokkaido. 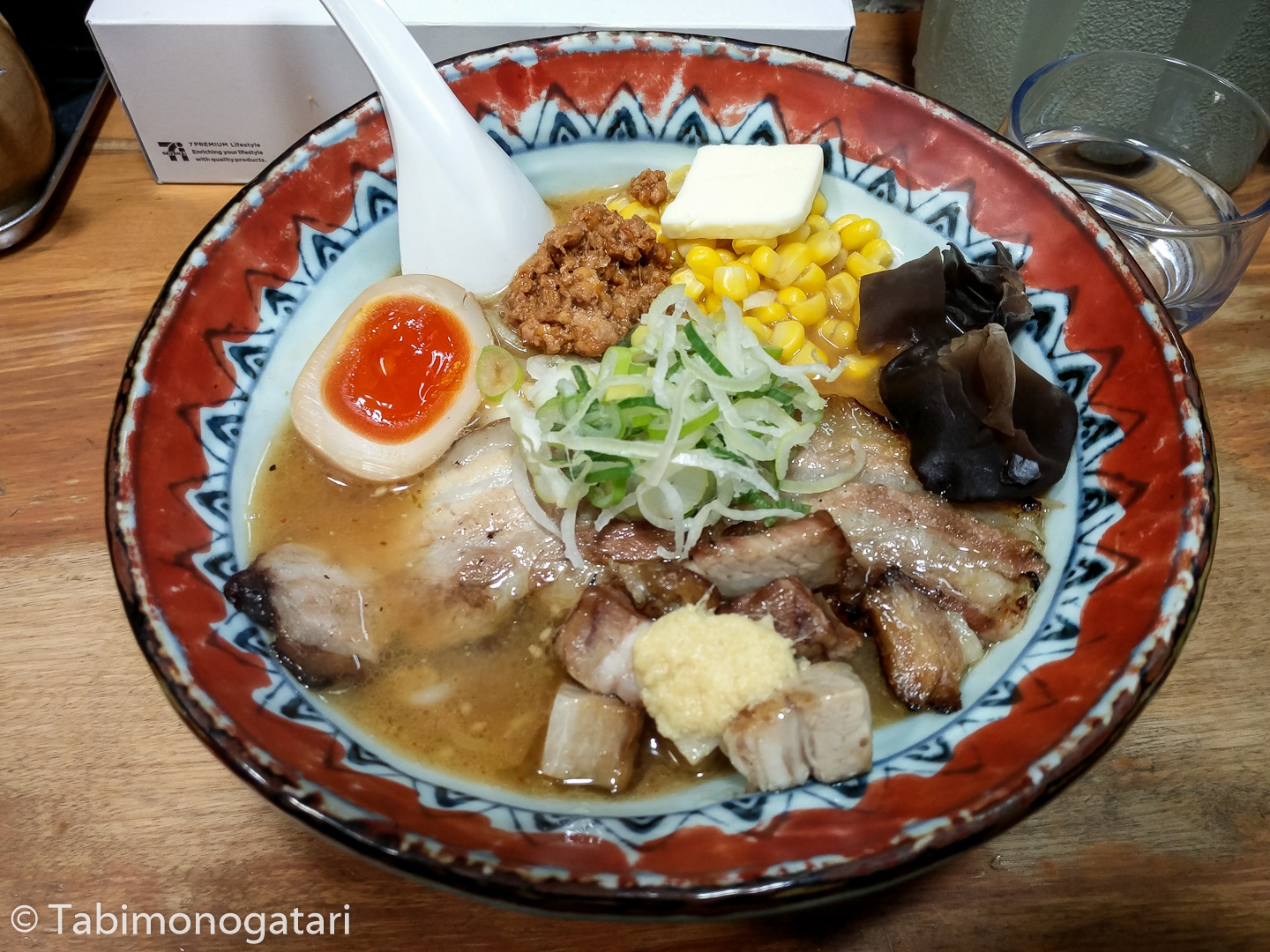 Then, I walked back to the company which took care of my suitcase. Even at 7 pm the office was filled with workers who greeted me when I peeked through the door. They must have been confused seeing a foreigner requesting a suitcase during their overtime hours.

From there it took me less than an hour to Chitose Airport, thanks to the regularly operating airport express trains. Unfortunately, the shops were already closing or preparing to, but I could pass the time with writing. At the security checkpoint I noticed something interesting. It posed no problem to bring a filled water bottle through the checkpoint, as it was tested in a machine for potential dangerous content.

The plane departed on time and we landed at 11 pm in Haneda. While trains are still running at this hour, it would have been a great hassle to move far away for a hotel. Therefore, I booked a capsule inside the airport at first cabin. The modern capsule hotel emulates a first-class seat in a long-distance plane at an affordable price. The space is just large enough to fit the full-sized bed and the bathroom is shared, but serves its purpose well for people like me.

The next morning I will depart for Kusatsu, a town north of Tokyo renowned for their natural hot springs.