In this post I will talk about the 17th edition of the Japanese film festival Nippon Connection I attended in the last week of May 2017. This year marked my second visit to the festival after my first one in 2015 (my take on it here). Unfortunately, like last year the Japanese pop culture fair JapAniManga Night in Davos, Switzerland was scheduled on the same weekend, so I had to make a call for which event to attend. Considering the fantastic line up of films and film makers behind them, together with Miriam I decided to attend the biggest Japanese film festival outside Japan. 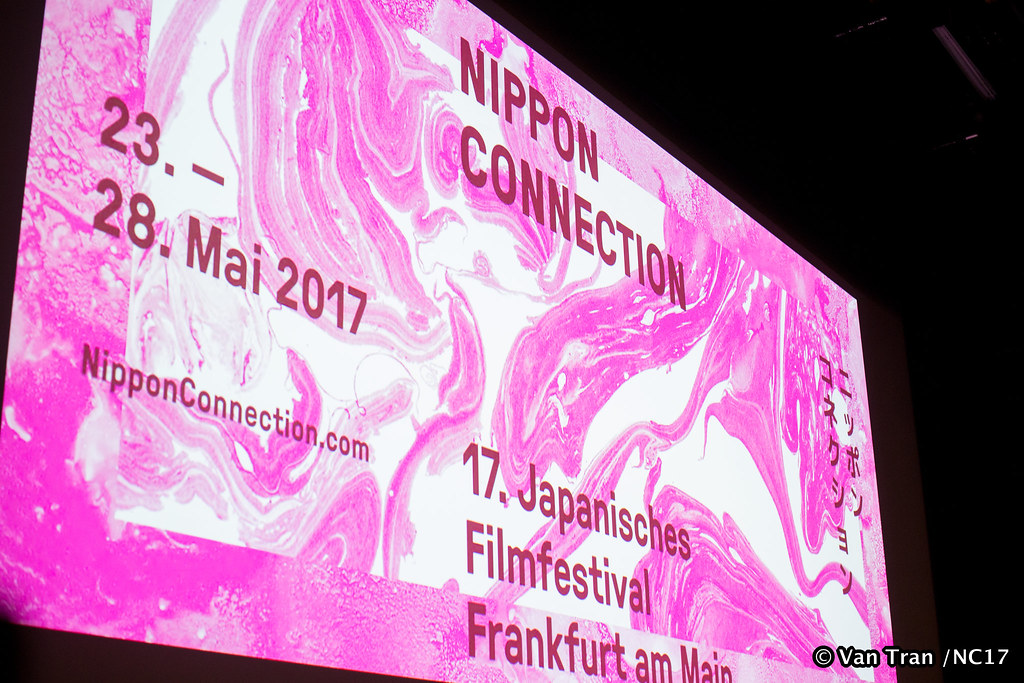 The festival is hosted in several locations in Frankfurt am Main which can be largely reached by foot or public transport. Coming from Switzerland, the city is also well accessible compared to other major cities further northbound. I attended the festival for four out of six days in order to see a large variety of films in different categories. For the first time, I chose the long-distance bus company Flixbus instead of the German railway to travel to Frankfurt. While I continue to prefer travelling my rail, the journey underwent without significant delays or incidents.

From the vast festival selection, we decided to watch nine films spread over the four days we attended. Among these were uplifting comedic stories, historical dramas, documentaries, and anime movies. The festival also offered a large variety of cultural performances, workshops, and food stalls. 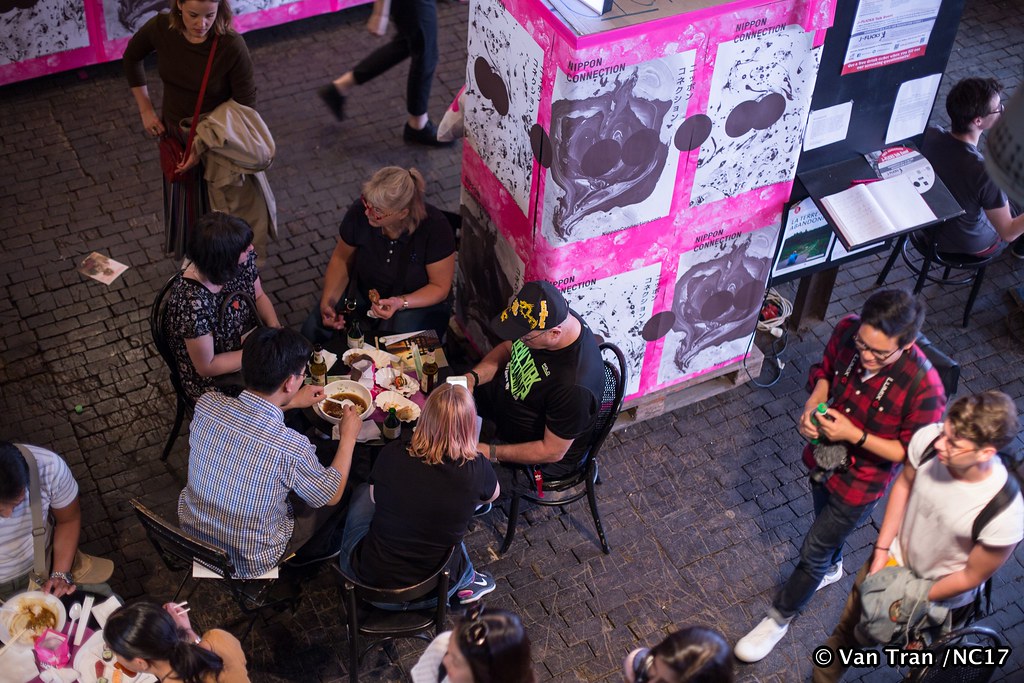 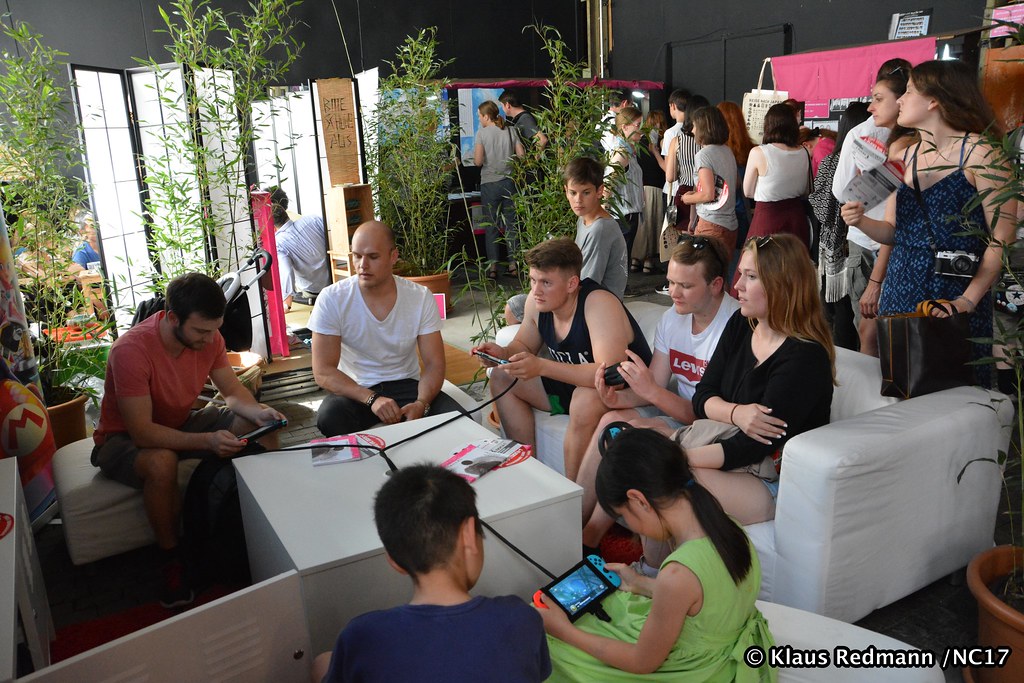 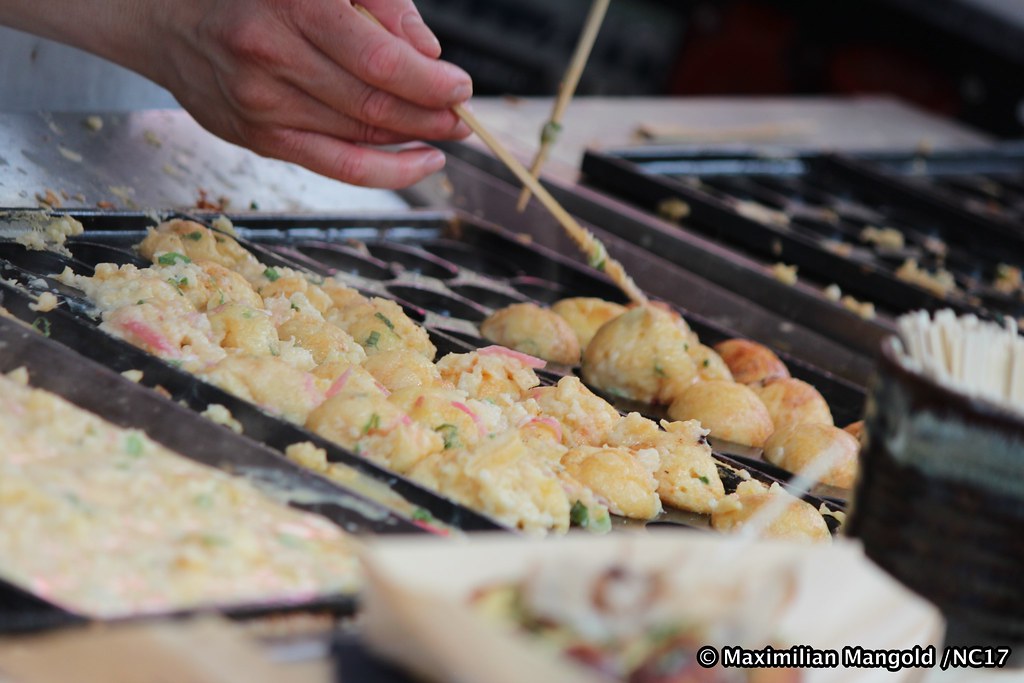 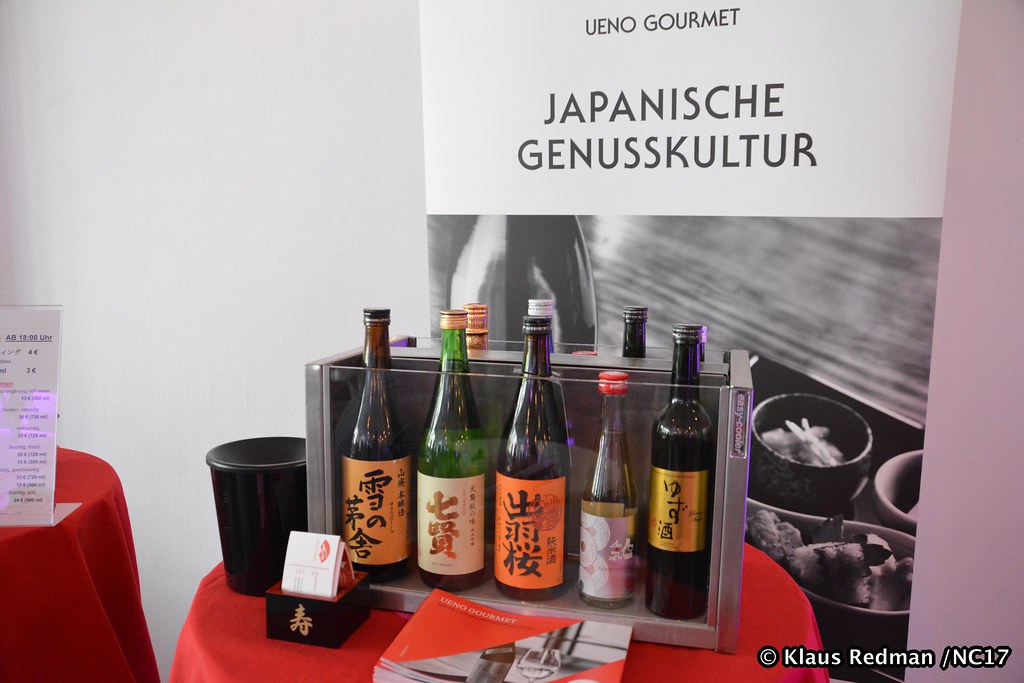 Instead of reviewing each film in detail I will attach the trailer and give a short, personal impression. To me, all nine films were outstanding, and I have no reservations recommending any of them. I will list them in the order we watched them at the festival.

The story revolves about the young Satoshi who is a pro Shogi player. When he is diagnosed with cancer in advanced stage he decides to give his all to beat his rival Habu and become the meijin, the best Shogi player of Japan, in the little time he is left with. The film quickly drew me in and I rooted for him to rise to the top. The film is based on actual events and I highly recommend watching it, even though you might not be interested in Shogi.

This ganbare movie from the director of Flying Colors, which I enjoyed, caught my eye because of its hilarious plot summary. In a school in rural Fukui a cheerdancing club sets out to become the best team in Japan and go to the U.S. championship. The light-hearted story line was amusing and made it easy to root for Hikari and the other girls. To my surprise the ending credits revealed that this story is not fictional but is based on actual events.

This live action movie continues the story of the popular manga and anime Death Note, which is about the student Kira who obtains a death god’s Death Note one day. Every person one’s name is written in it will certainly die at this instant. He proclaims to use it to deliver justice to the world by killing criminals, but many see a terrorist in him. The mysterious detective code named L tries to catch him before Kira catches him. The film requires knowledge of the events of the original series, as many key characters make an appearance. I liked the incorporation of the cyberterrorism theme into the story and the narrative around Kira’s successor and the police department. The fact that a total of six Notes are spread in the film made the story interesting over the whole run time.

Five different directors worked on individual 15 minute short films in this project. While they have little in common expect being set in Tokyo, they each conveyed an interesting story on their own.

This anime movie produced by Kyoto Animation was ranking high on my plan-to-watch list, so I was glad I could watch it before at the same time of the Blu-ray disk release on the big screen. Having read extensive reviews about the film from exclusive screenings I will keep my impressions short again. The story revolves about the themes of bullying, deafness, and redemption. The high expectations I had concerning both the story and the animation were effortlessly reached by director Yamada and her team. The theme of the movie is underrepresented in this medium, especially since (according to opinions and articles I read in the past) bullying is a serious issue in schools in Japan, and all over the world. I appreciate that the provided subtitle was a hearing-impaired one which supports the theme and includes the deaf audience.

WHAT YOU TAUGHT ME ABOUT MY SON – Takuya MARUYAMA

This documentary was presented by the NHK, the public broadcasting channel comparable to ARD or SRF. We learn about Naoki Higashida who is autistic. While having difficulties expressing himself he found a way to communicate. With the aid of a paper computer keyboard he is able visualize the words he intends to say and learned to communicate thereby. Over the years he wrote several short texts about his condition and how he sees the world around him. David Mitchell, the author known for Cloud Atlas reached out to him in the hope of understanding his own son with the same condition better. The touching and personal documentary taught me some things about people living with autism and I plan to read Higashida’s book, „The Reason I Jump“, soon.

Raise Your Arms and Twist! Documentary of NMB48 – Atsushi FUNAHASHI

What are the inner workings of the Japanese idol industry? This question was splendidly answered by the director, who was present for the screening and a Q&A session. The camera follows the girls of the Osaka based group NMB48 back stage and follows several members in their stage of their career. Funahashi stressed he wanted to deliver the film without much personal judgement or bias to give the viewer the opportunity to decide for himself whether these girls could realize their dream of fame or whether they are exploited by their managers against their will. The film validated my concerns about the dark aspects of the Japanese show business, but also made me cheer for the girls to realize their dreams.

In This Corner of the World – Sunao KATABUCHI

The second anime movie we watched followed a girl from a village near Hiroshima through her life before and during the Second World War. The soft art style and the light-hearted atmosphere in the beginning are contrasted with the harsh fate the had to townpeople face. As time passed, the civilian population was increasingly involved in the war. First, the men left, then food was rationed, and in 1944 the air strikes began. The bombings continued until a single flash illuminated the sky over Hiroshima. Soon after the emperor declared capitulation, but instead of relief the film pictured civilians suffering from a mysterious disease. In This Corner of the World conveyed the struggles of living in the time of war through the eyes of the protagonist. While the narration seemed consistent with history, events leading up to the war, including Japan’s aggressive invasions were omitted. Due to this, the film was criticized by some as being too patriotic and nationalistic. On the other hand, since the story is presented from this angle, it makes only sense to leave it out. I would argue that the movie mirrored the knowledge and views of the protagonist instead.

The Emperor in August – Masato HARADA 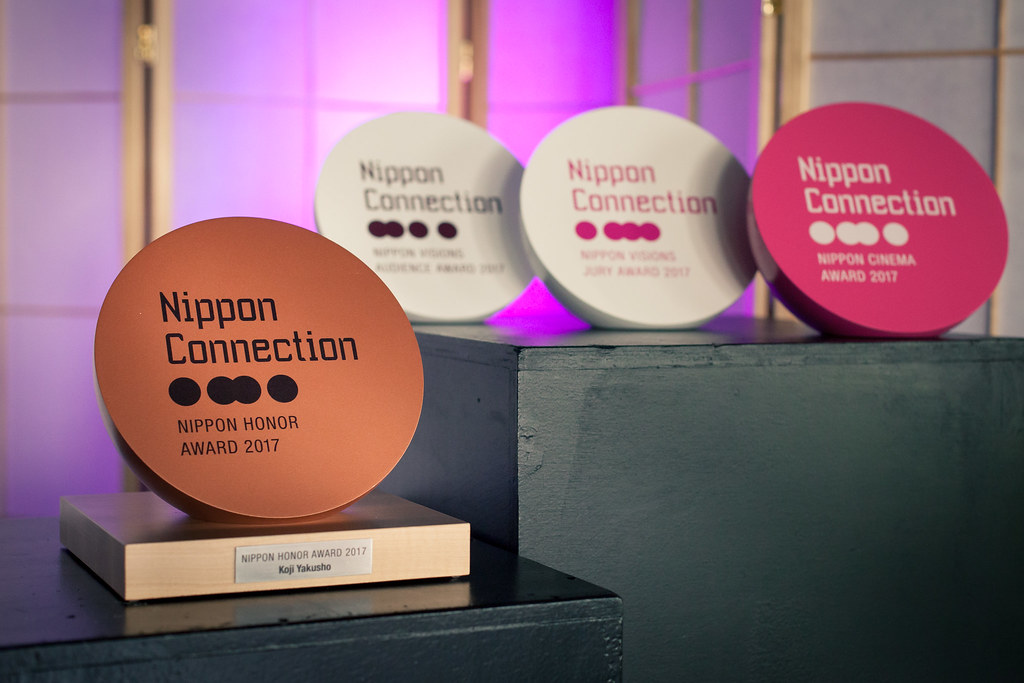 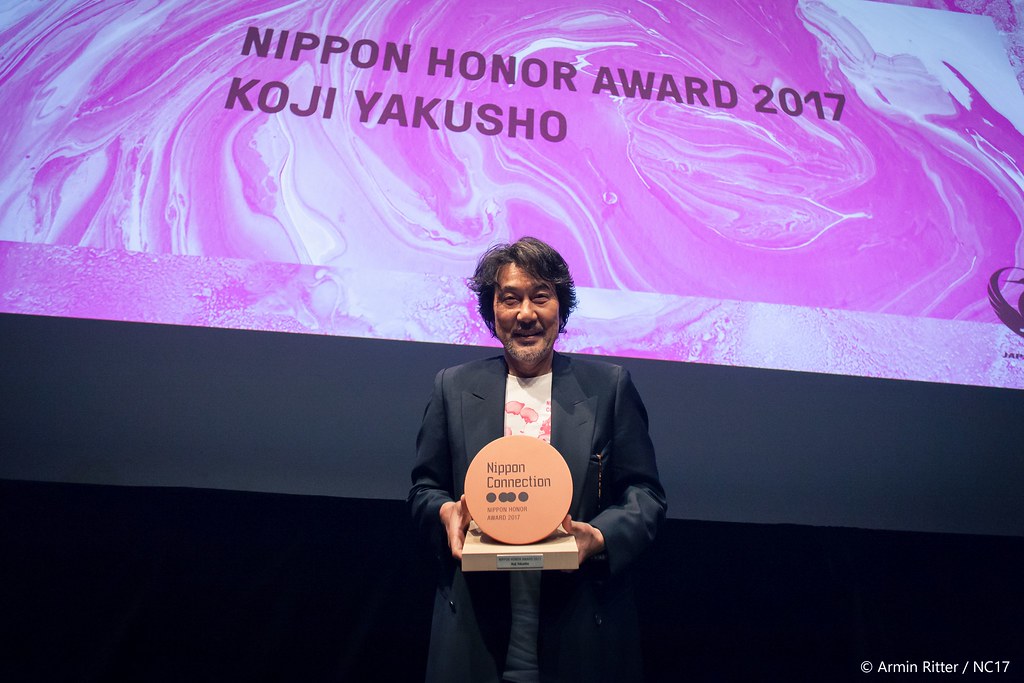 Before the closing movie was screened, the award ceremony took place which was filled to the last seat. Three prizes were awarded for movies in the main categories, selected from both the audience and a jury. Moreover, the Nippon Honor Award was given to Koji Yakusho, a renowned actor who also played the main role in the following movie. The Nippon Cinema award was awarded to The Long Excuse, Start Line and Poolsideman received the Nippon Visions awards.

This film retells the last days of the Second World War from the perspective of the Japanese government. The Japanese emperor finally decides to end the war in 1945 after seeing the great damage done to the Japanese towns and its citizens, and assembles his ministers and military officials to draft a plan to end the war peacefully. The captivating narrative reveals internal struggles in the military and the reluctance to admit defeat. I do not know how close the story follows actual events, but it certainly makes a thrilling history drama. This film complimented the earlier film in showing how Japanese people remember the war. Needless to say, both films are patriotic in nature and highlight the struggles for the Japanese citizens without mentioning the prior war activities in Asia.

As soon as the credits rolled at 11 pm, we left the venue to reach our connection to home. We boarded the night bus around midnight and arrived in Zurich at 7:30 am. The rising sun at the time we crossed he border was very satisfying in this moment of sleep-deprivation.