In the first June weekend visited the 15th Nippon Connection in Frankfurt. It is a Japanese film festival with very diverse films and a lot of supporting program. In total, I watched three movies, of which one was an anime. Find the trailers and synopses as well as my impressions below. 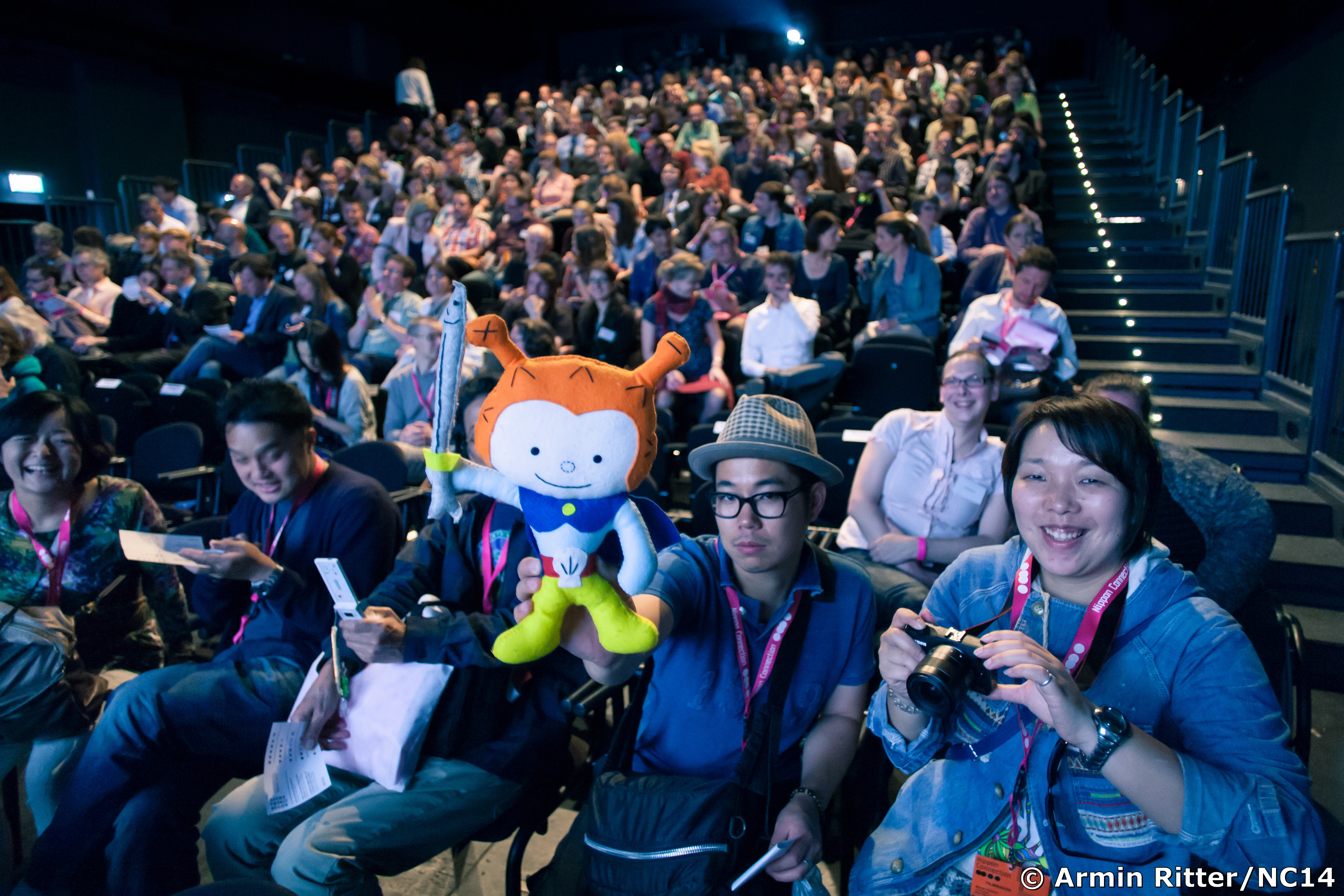 Films were screened for full six days, but I could not make time earlier, so I attended only Saturday screenings. Aside from the films itself, workshops and talks also invited to spend time on the venue. The festival happened at multiple small cinemas simultaneously, so it was necessary to change the location sometimes to catch everything that was interesting.

Have a look at this video from last year which gives some impressions of the festival.

Arriving at the venue

The day before I covered the longer part of the distance, going from Switzerland up to Mannheim. That is why I arrived in Frankfurt less than an hour after boarding the train. At the main station I met up with colleagues who also wanted to attend the event. Together we took the local subway to the first cinema, the Mousonturm. 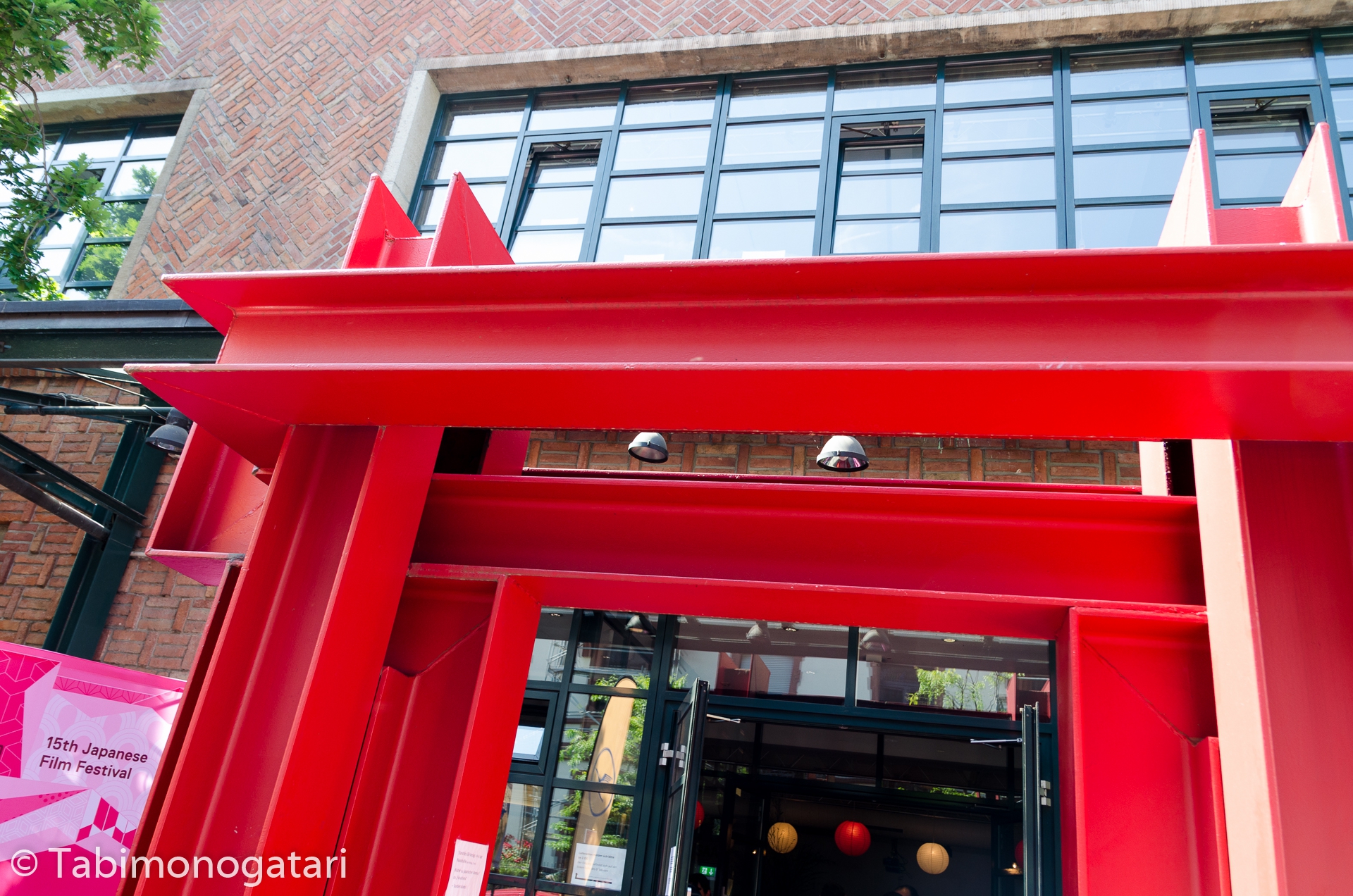 The first thing I noticed was the red torii gate at the entrance. Inside we found a booth from NHK World and a shop selling merchandise. Upstairs was a food stall which did not only offer Japanese snacks but also bento boxes. Also there was a bar, some merchants and a small gaming arcade. 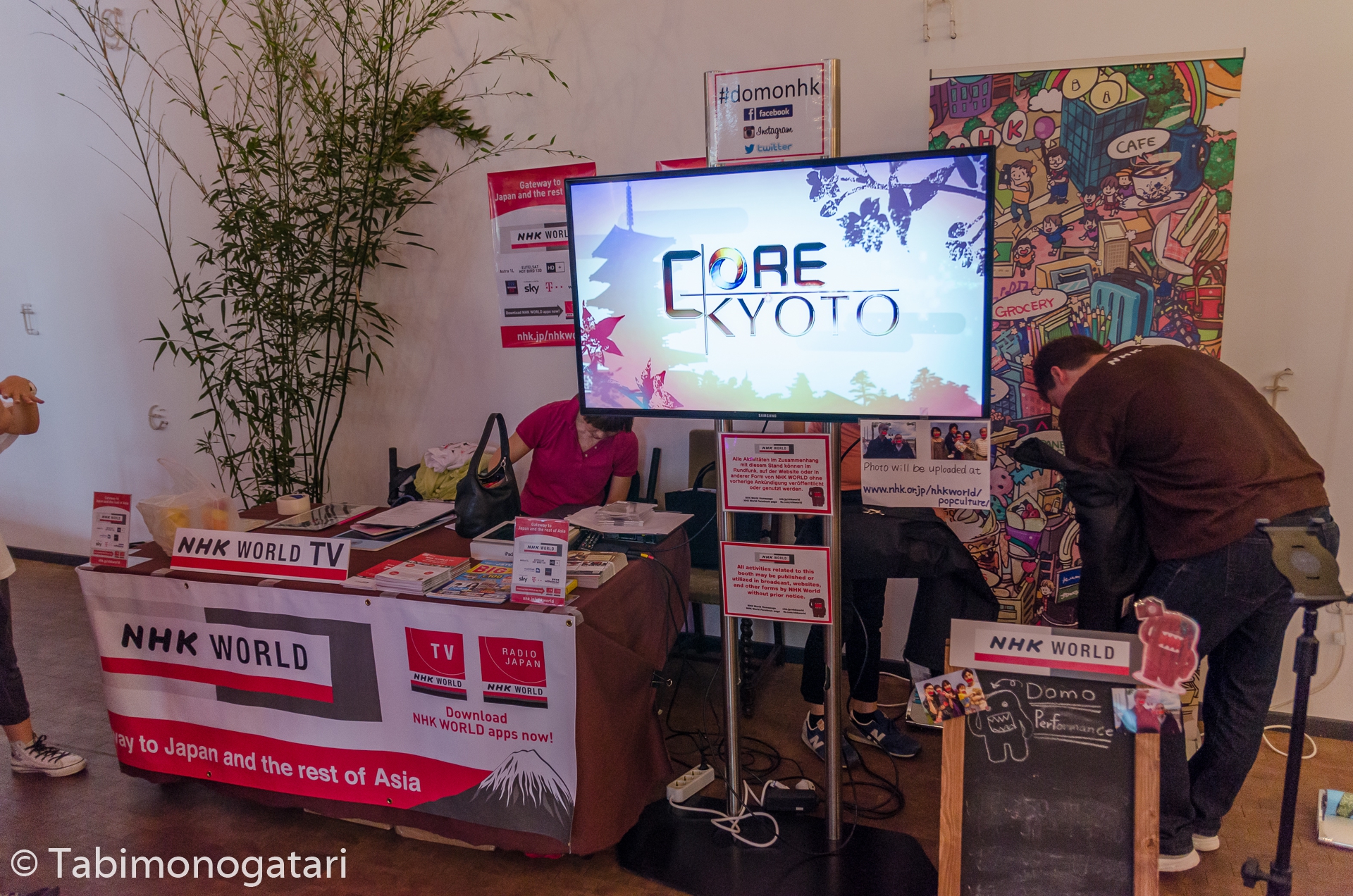 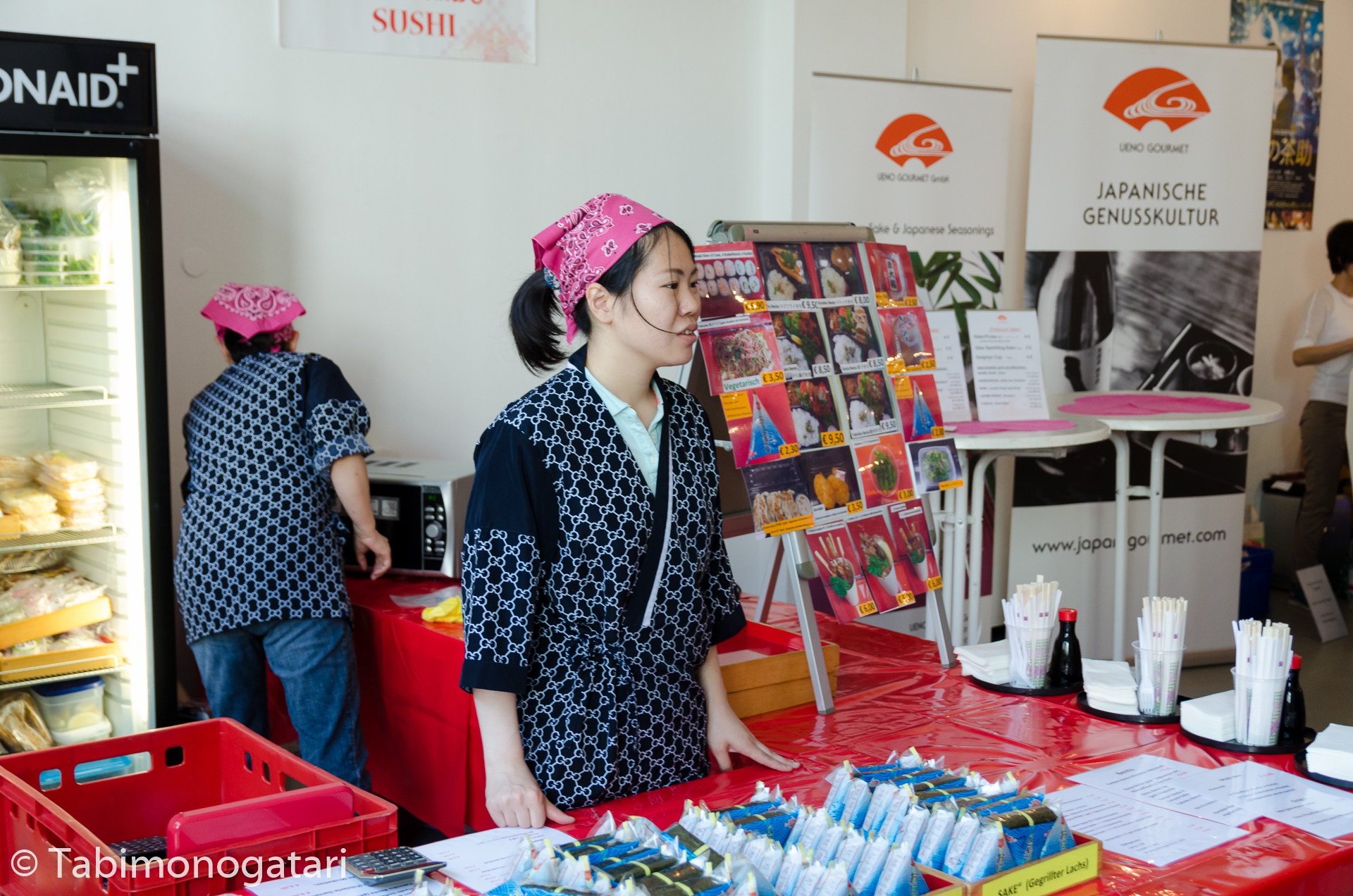 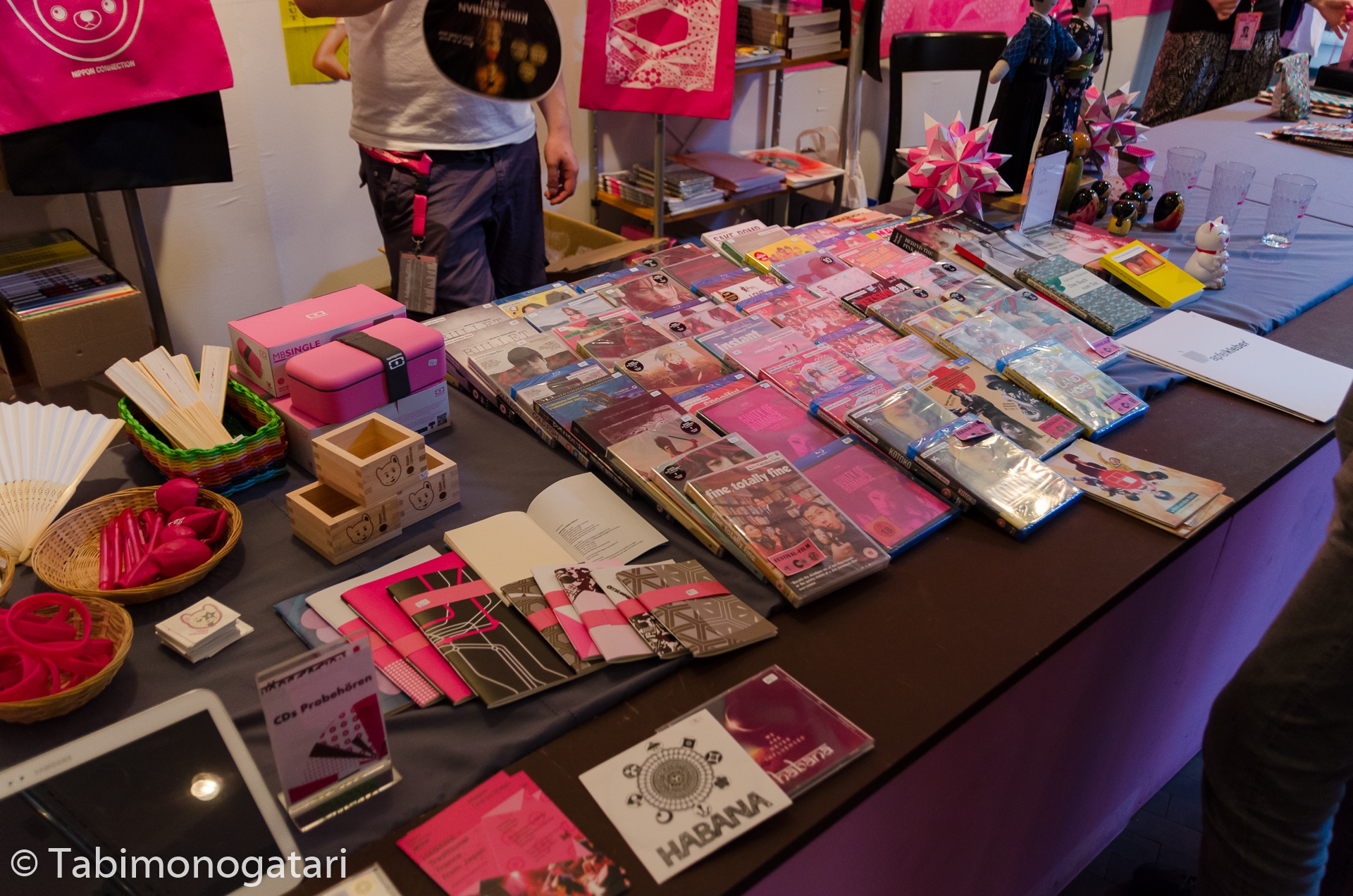 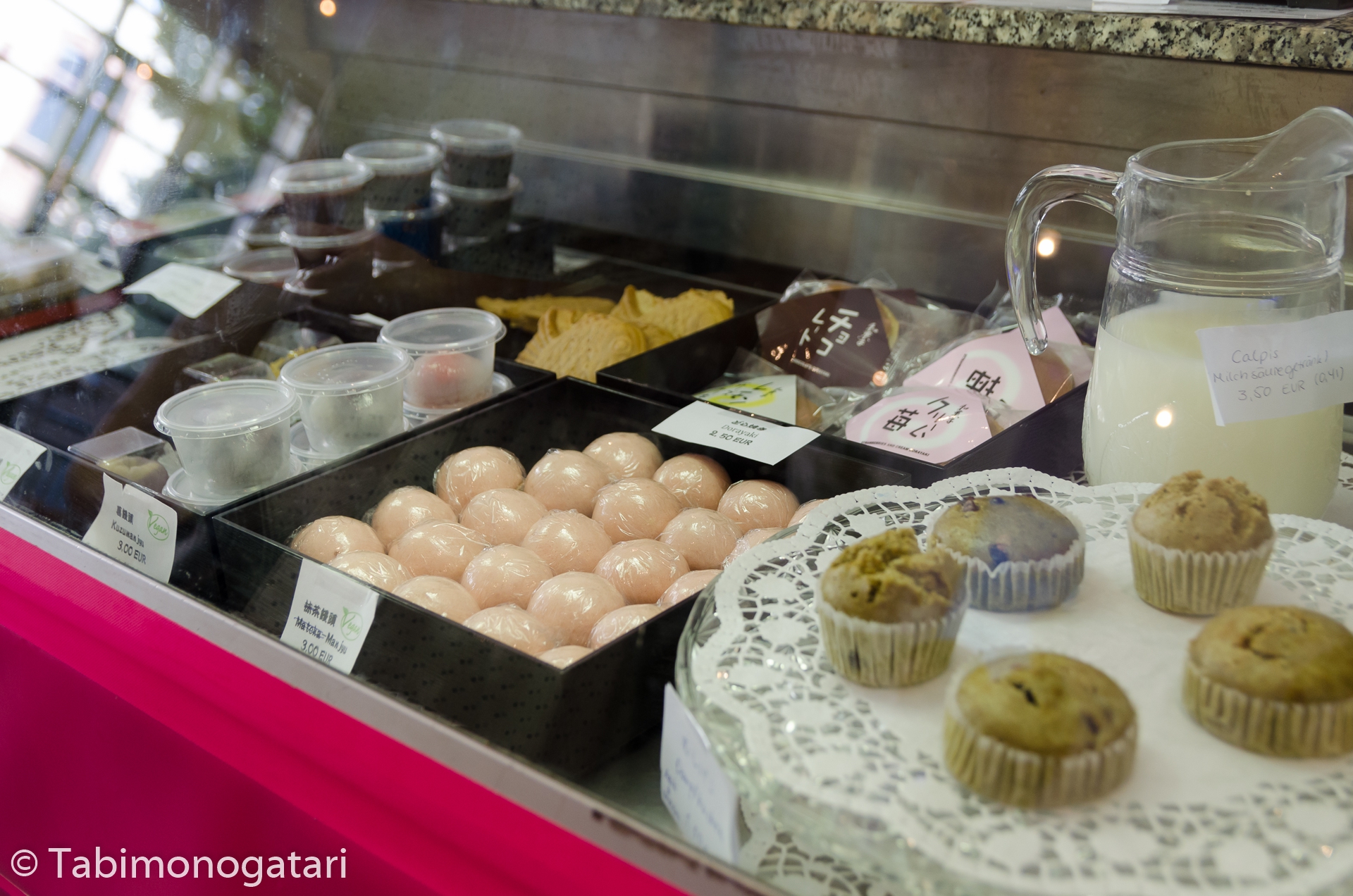 Back in the first floor the whole area was crowded as everybody was queuing for the first screening, the Psycho Pass Movie. Our tickets were checked at the entrance and we could freely choose our seats in the rather large room. 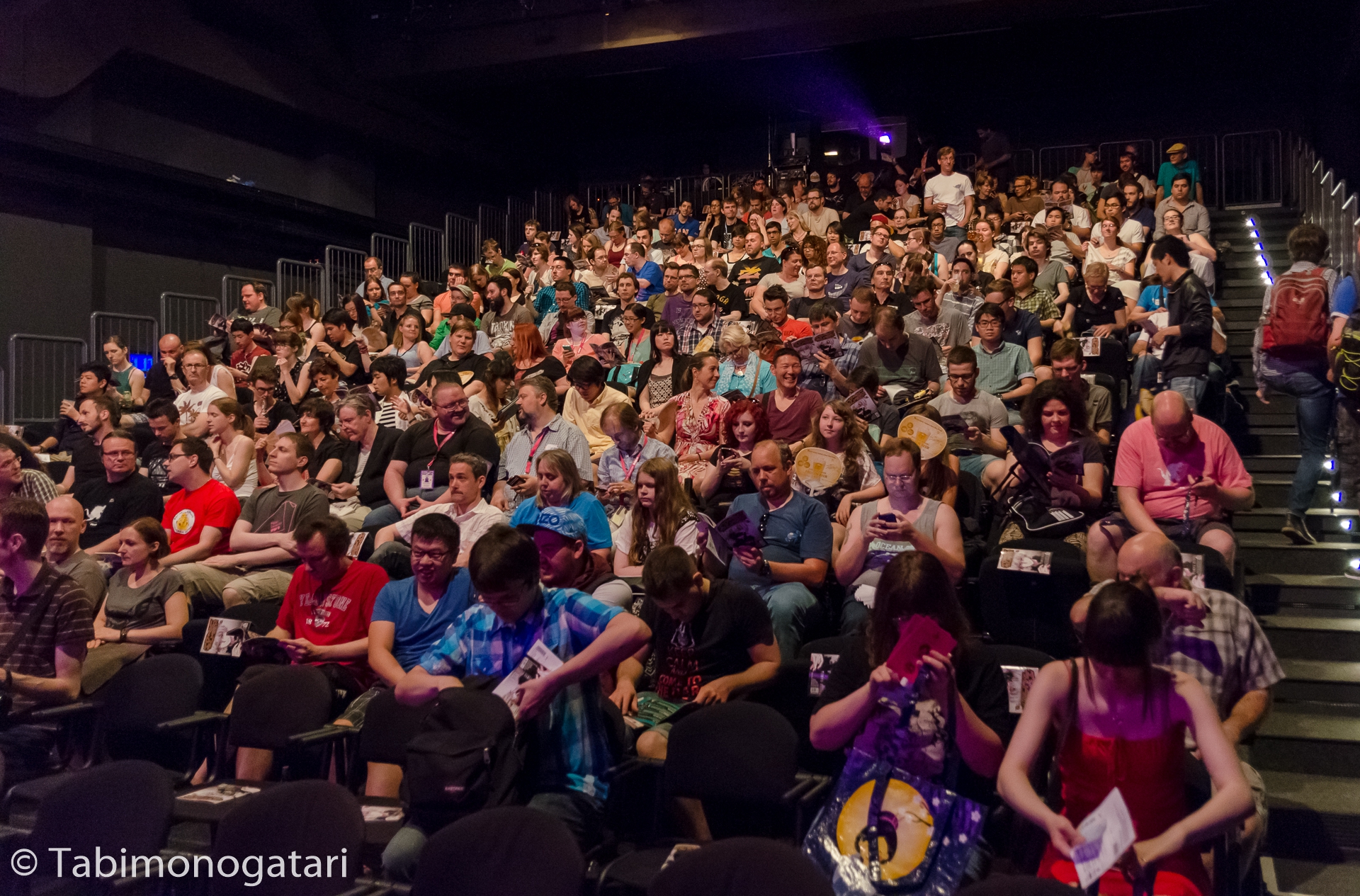 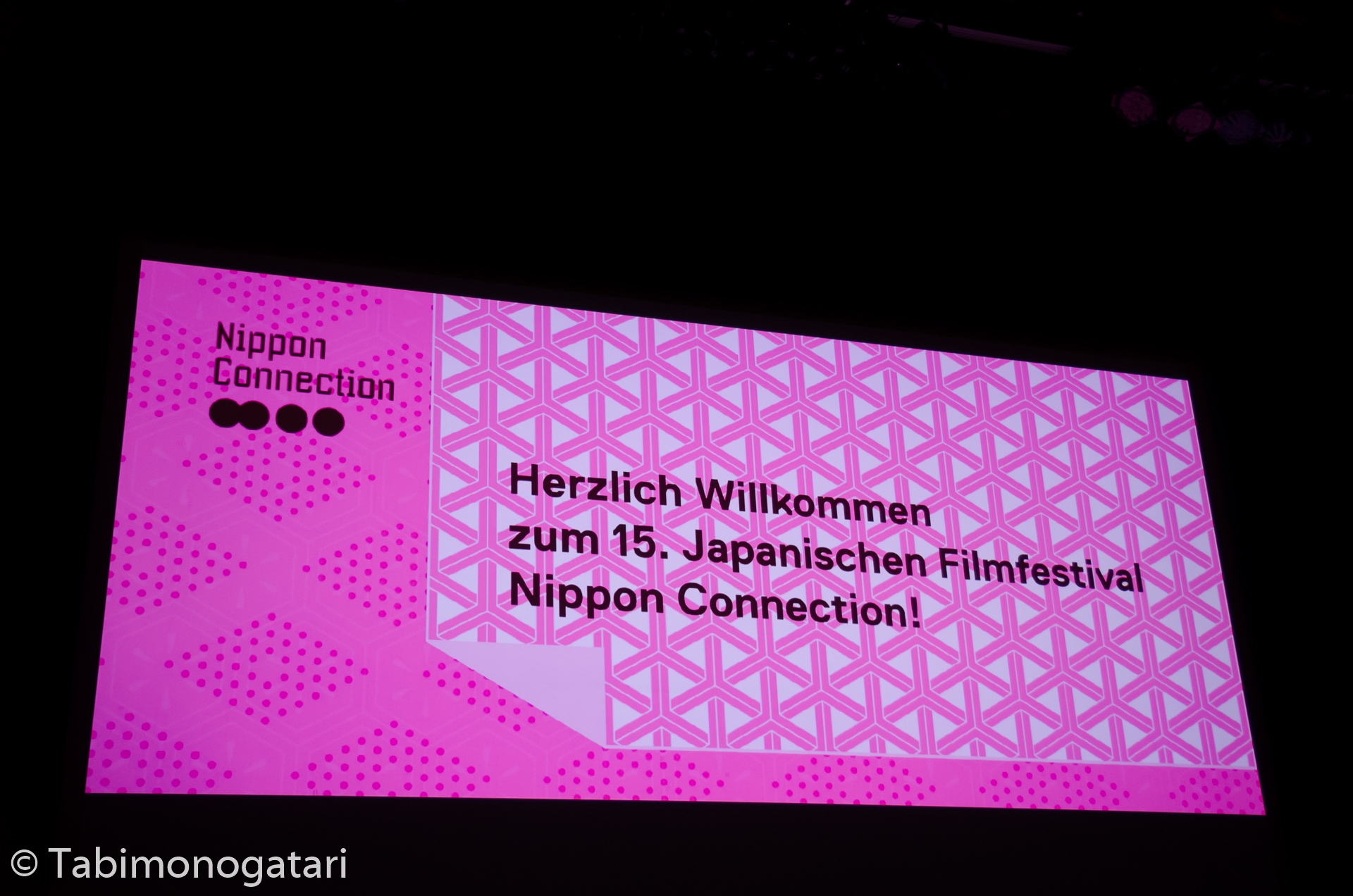 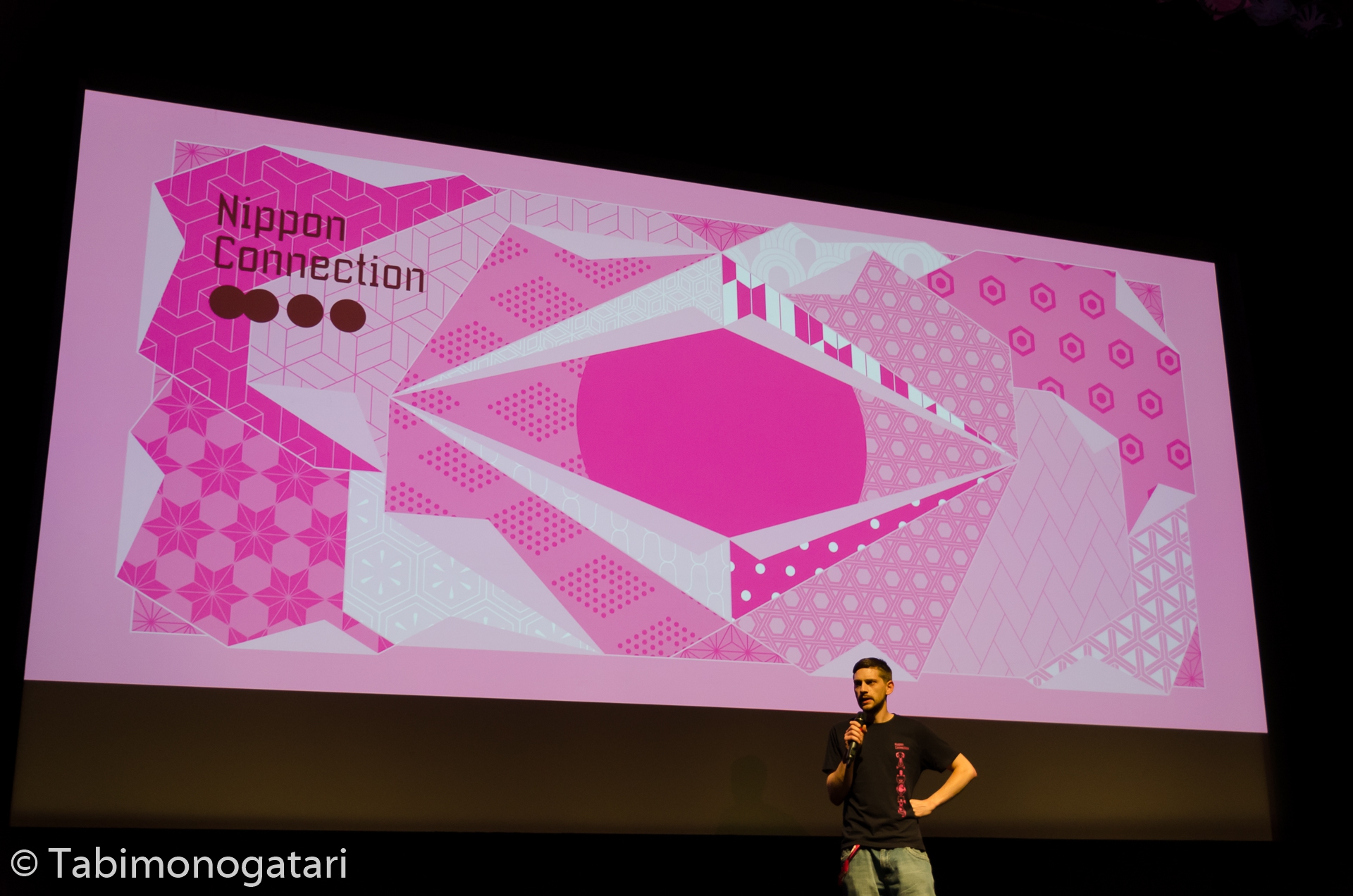 Before every film screening the trailer of the festival was shown.

This was followed by a short introduction by the staff and some commercials were shown. I am the kind of person who does not dislike commercials if they are creative and well-directed. Particularly, I enjoyed the ads from Honda and NHK World.

After all these introductory remarks, let’s talk about the films!

Year 2116 – The Japanese government begins to export the Sibyl System unmanned drone robots to troubled countries, and the system spreads throughout the world. A state in the midst of a civil war, SEAUn (the South East Asia Union), brings in the Sibyl System as an experiment. Under the new system, the coastal town of Shambala Float achieves temporary peace and safety. But then SEAUn sends terrorists tqo Japan. They slip through the Sibyl System and then attack from within. The shadow of a certain man falls on this incident. In charge of the police, Tsunemori travels to Shambala Float to investigate. The truth of justice on this new ground will become clear.

The movie is a sequel to the anime series which aired in 2012. I will try to avoid spoilers which go beyond what is shown in the trailer, but if you have not seen the original series, I do not recommend watching the movie on its own.

To summarize the original plot in a few sentence, there is a new system of justice in place, called the Sibyl System. It evaluates the mental state of every citizen, called Psycho Pass, and detects their criminal potential, which is used as judgment over live and death. The story follows the inspector Akane Tsunemori as she hunts criminals with her colleagues, who are also latent criminals. As the plot progresses the flaws of the system get uncovered. Is there something as absolute justice?

The screening is the first one outside Japan and since I am a big fan of the original series I really wanted to see it as soon as possible. The Japanese dub was supported by German subtitles.

Technically, the animation was on a very high niveau. Every scene was drawn with many details, the backgrounds were stunning and the computer generated animations were done well, as expected from studio Production I.G. Also the sound was really great, something I am not used to, even from cinema screenings.

What I really liked was the heavy use of English throughout the movie. Many agree that most Japanese are not that great in English, but the voice actors did their best to speak in an understandable way. It was not perfect, but with the aid of the subtitles we figured out what they meant. The first five minutes or so were spoken entirely in English, so everyone sighed in relief when the first line in Japanese was spoken. As the film is set in the future, a translation device is conveniently used as explanation why everybody still speaks Japanese for the most time during the film. This would have been okay for me if they did it consequently. Unfortunately, there was a scene later in the film where they spoke Japanese despite being in the wasteland without any assistance of technology.

The voice of the main character, Kana Hanazawa, did a great job again voicing Akane in both Japanese and English. The only thing sounding funny was when she responded plainly “Whaat?” upon hearing something unexpected.

The opening theme was a new one from the band which performed the previous songs. The ending credits were accentuated with the first ending song from the series by EGOIST.

Like in the second season, the film contained some scenes with gore, aka exploding bodies and intestines. There was hardly censoring and details were clearly visible.

Taken all together I enjoyed the movie very much. The script by Gen Urobuchi was overall well written, but there were some plot holes as well. The dialogs were nice as well and I am happy with the solution of the conflict. Technically the movie was on a high niveau.

While the credits rolled, about half of the audience left. In Japan it is custom to stay until the very last name has been shown to show the respect to the makers. There was an extra scene after the credits which many have missed.

Shortly after, I entered the cinema auditorium again for the second film.

How many times have you dreamed of having a romantic relationship with your late grandmothers’s ex-lover? Sounds a bit weird? No wonder then that Tsugumi is hesitant about Jun’s advances. But can she relly fend of his awkward charm forever? Ryuichi Hirioki, the grandmaster of Japanese melodrama, once more combines an unusual plot with humor for his characters.

The director of the movie, Hirioki, was present and shortly introduced himself. After the screening there was an Q&A session with him. 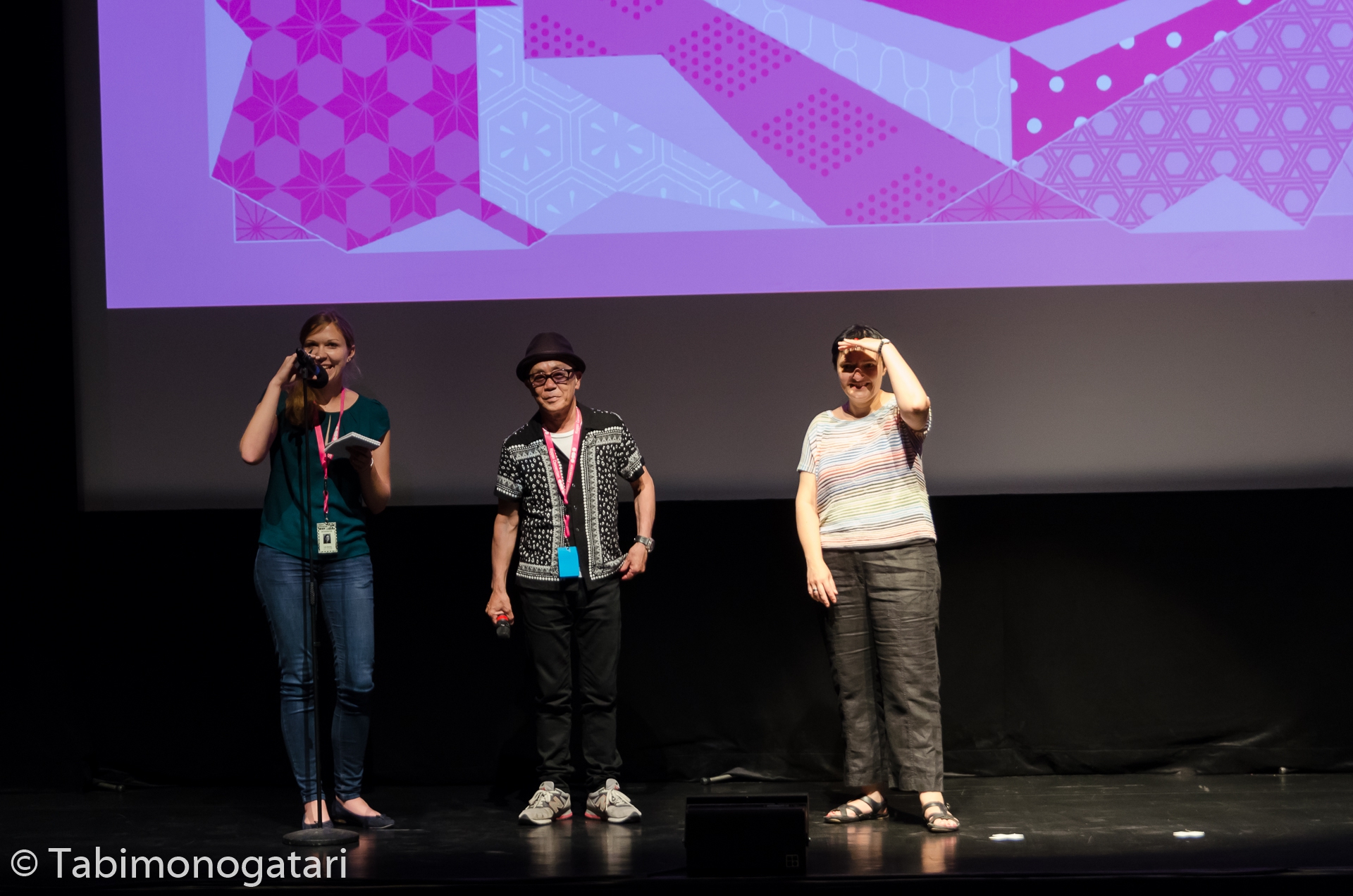 The film is adapted from the manga and is set in the countryside of Kagoshima prefecture in Kyushu. To me the movie was typical Japanese. It had a slow pace and did not rush, just telling the story of the two. While Tsugumi was quiet unhappy about the unwelcomed guest in the beginning, she built up a strong relationship to the philosophy professor. There were many small aspects which gave a good impression about how life is in the modern rural Japan. The acting was very good and the Typhoon scene seemed like it was actually shot in an heavy storm.

For the next movie I had to change locations. Before I went on, I had a short stroll around the area and also peaked into the Naxoshalle, another location. Outside was a team from NHK world again with a Doko-kun performer. Some time later I arrived at the Mal seh’n cinema for the next film. 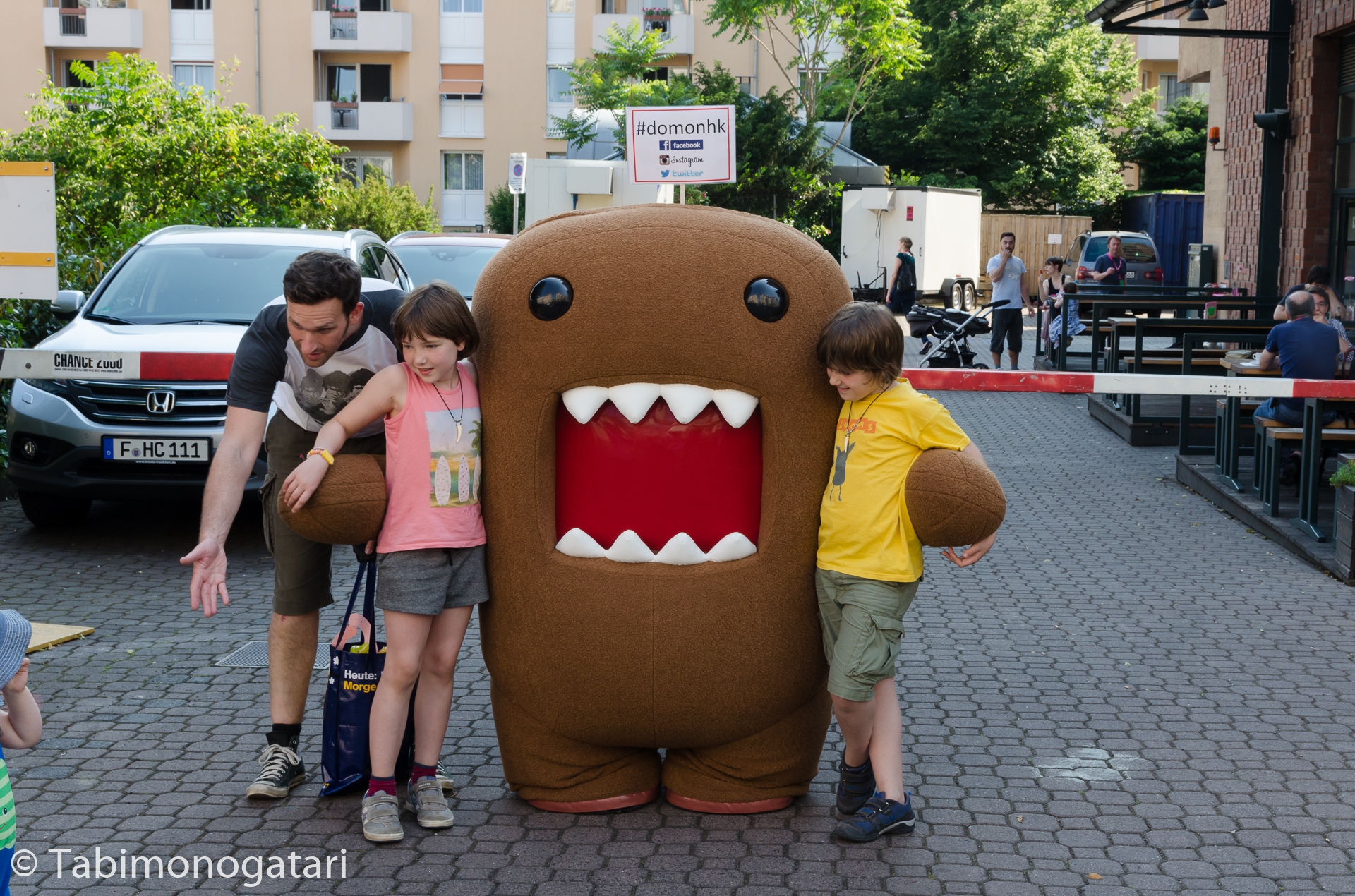 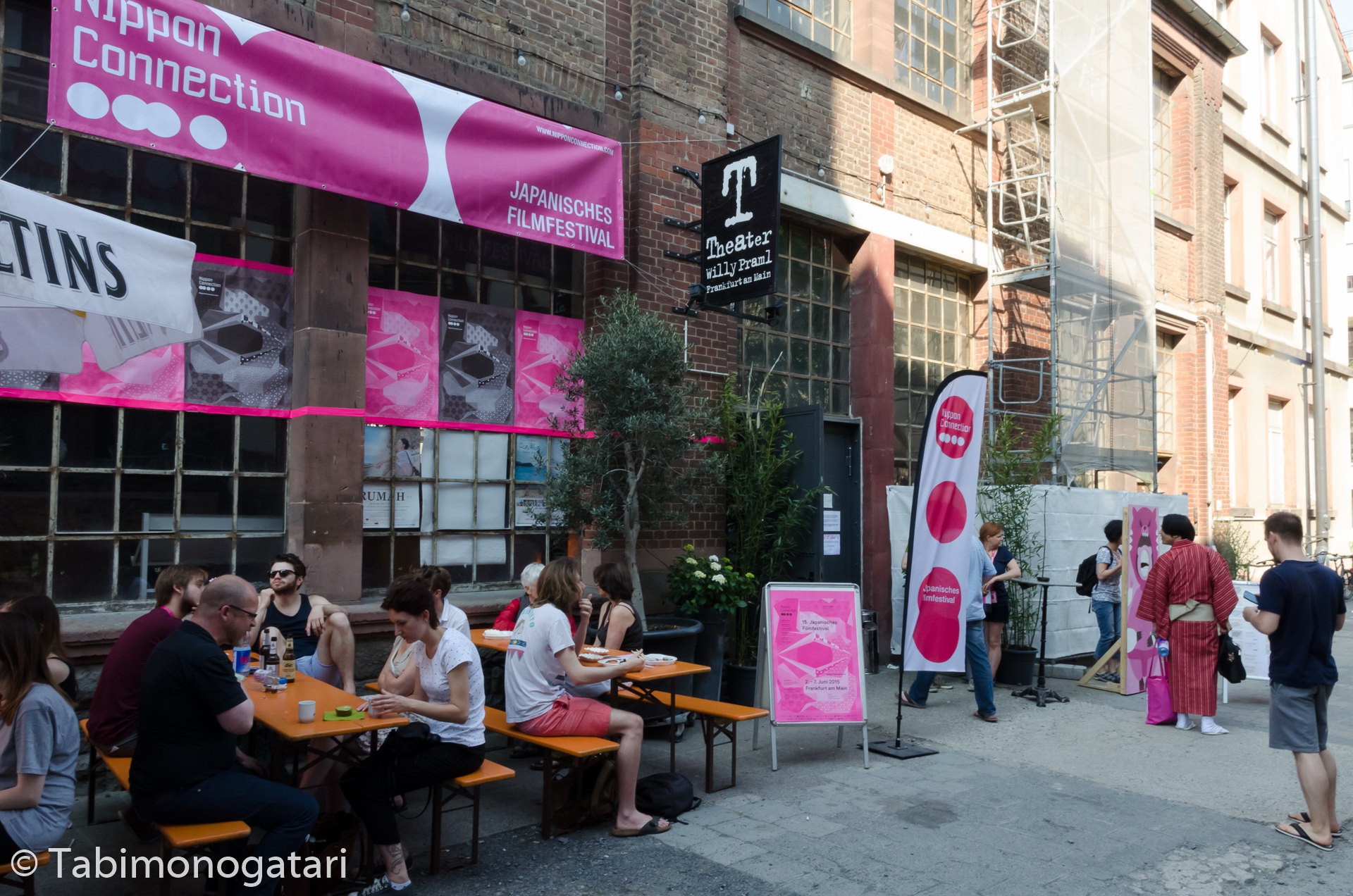 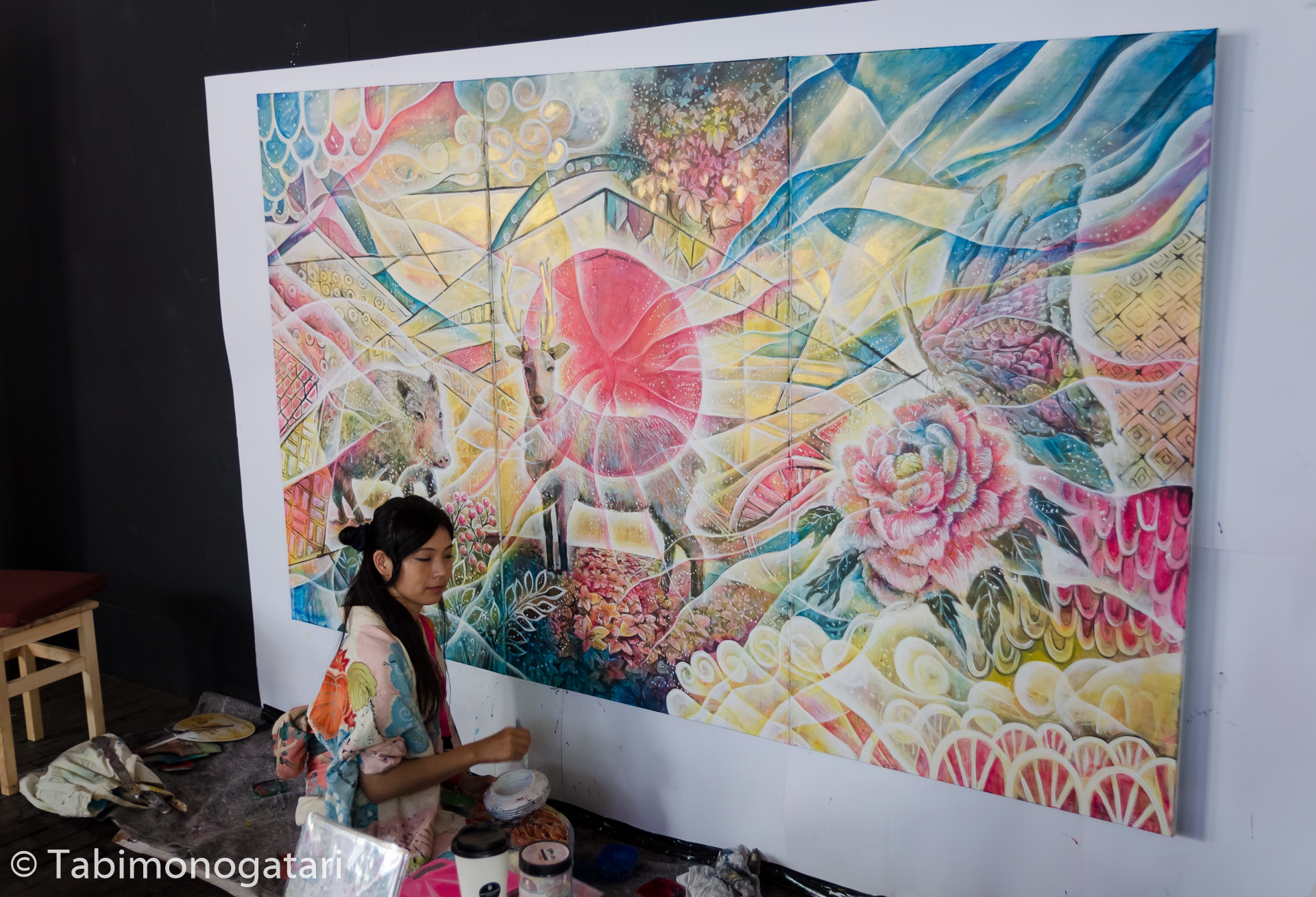 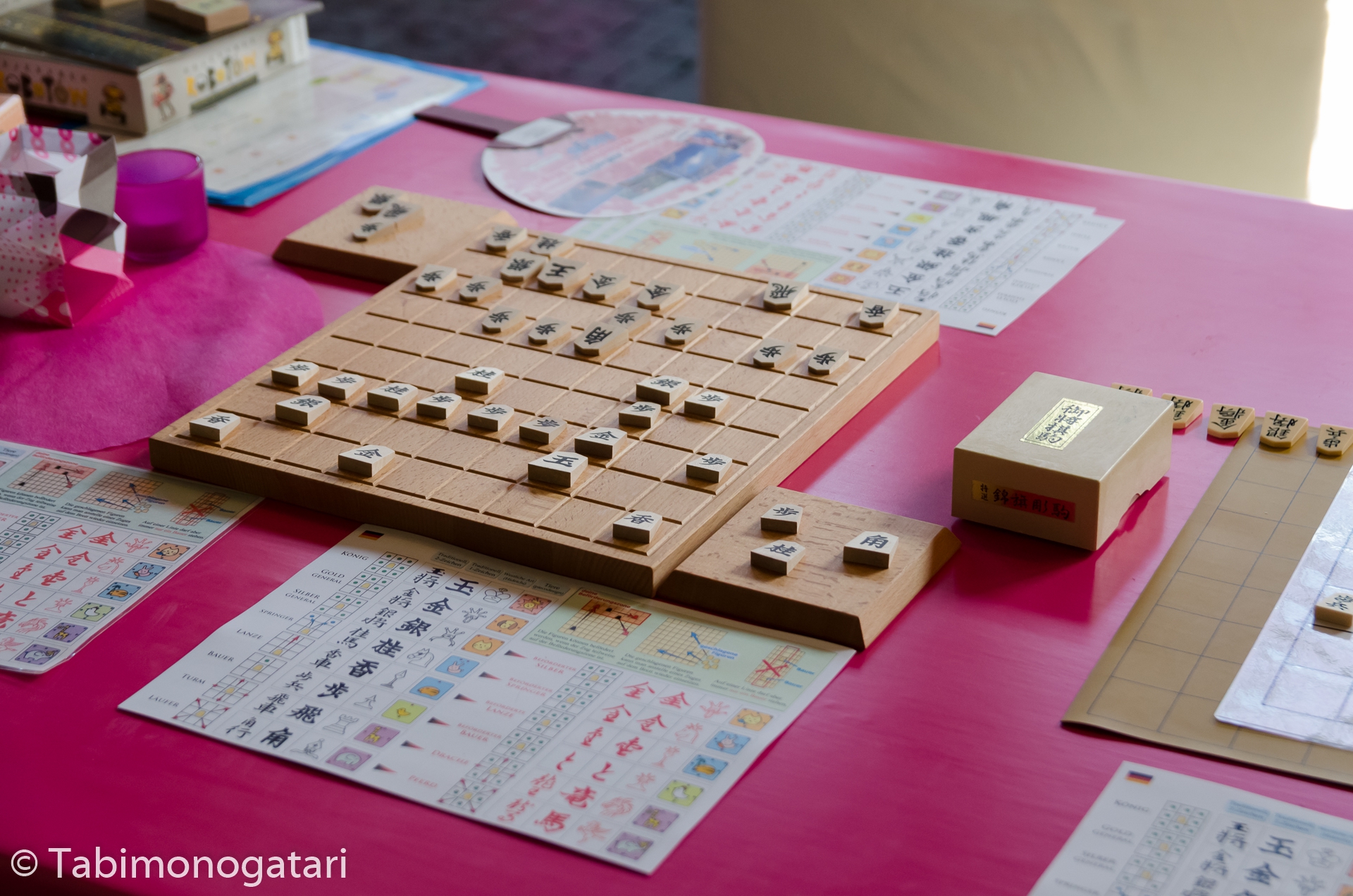 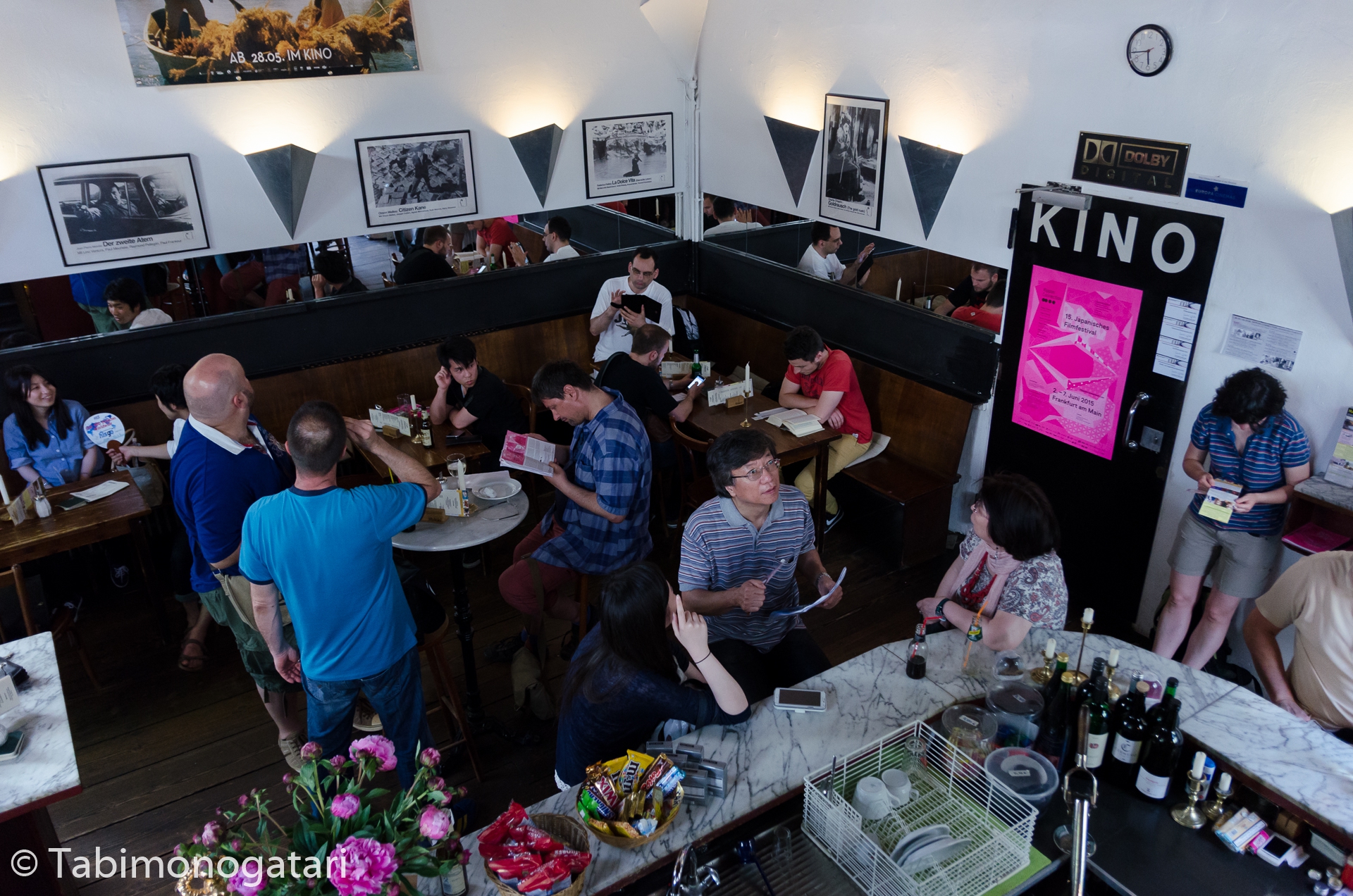 When the lovely Kanako disappears, her latently psychotic father goes on the search for her, discovering a cesspool of sex, violence and malice. Tetsuya Nakashima treads into morally ambivalent waters, sparing neither his protagonists nor his audience. Enter the world of Kanako at your own risk and prepare for a cynical, amoral and excessively violent trip – with no return ticket.

When I read that this film was from the director of Kokuhaku, I knew that I did not have to expect a happy movie. Indeed, the movie was terrifying in every aspect – even worse than what I expected.

Kōji Yakusho played the main character of the psycho thriller, a mentally ill and divorced father who did not care much about his or others well-being. He is looking for her missing daughter, who, as he begins to find out, is not as innocent as he and his ex-wife believed. Involved with drugs, prostitution and suspicious business men she pulled her classmates deeper and deeper in her dark world.

The father himself was not a nice character himself either. Without hesitation he attacked and assulted people, heavily injured people and also took a gun in his hand. Almost every character had blood at his hands, be it his or her own or the one of their victims.

Yes, the whole movie was full of gore. The main character had blood on his clothes from the first few minutes straight to the end. He and others were afflicted with many wounds and people were killed in a ruthless way. In one scene a body bag was opened to reveal a man on the verge of death with an open belly and covered in blood.

Cinematically the ill state of the protagonists mind was portrayed with fast cuts and quick changes of location and time. In fact, it was hard to follow the plot in the first half, since the chronology was not established well yet. The unfitting oldie music in the background accentuated the plot in a sarcastic way.

To conclude, the movie was a hard one to swallow. It was well made nonetheless. The plot was dense and uncovered the hardly talked about aspect of the underworld in Japan.

After the heavy movie I went out for a bit and looked for something to eat. A Korean restaurant close to the main station was recommended to me, so I took a look. The theme was more of a fast cooking, less service approach, meaning after ordering at the counter you wait and pick up your order. My order was kimchi and a main dish with thin sliced beef on top of rice. Both dishes were very tasty and went well with the Gingseng tea I ordered. 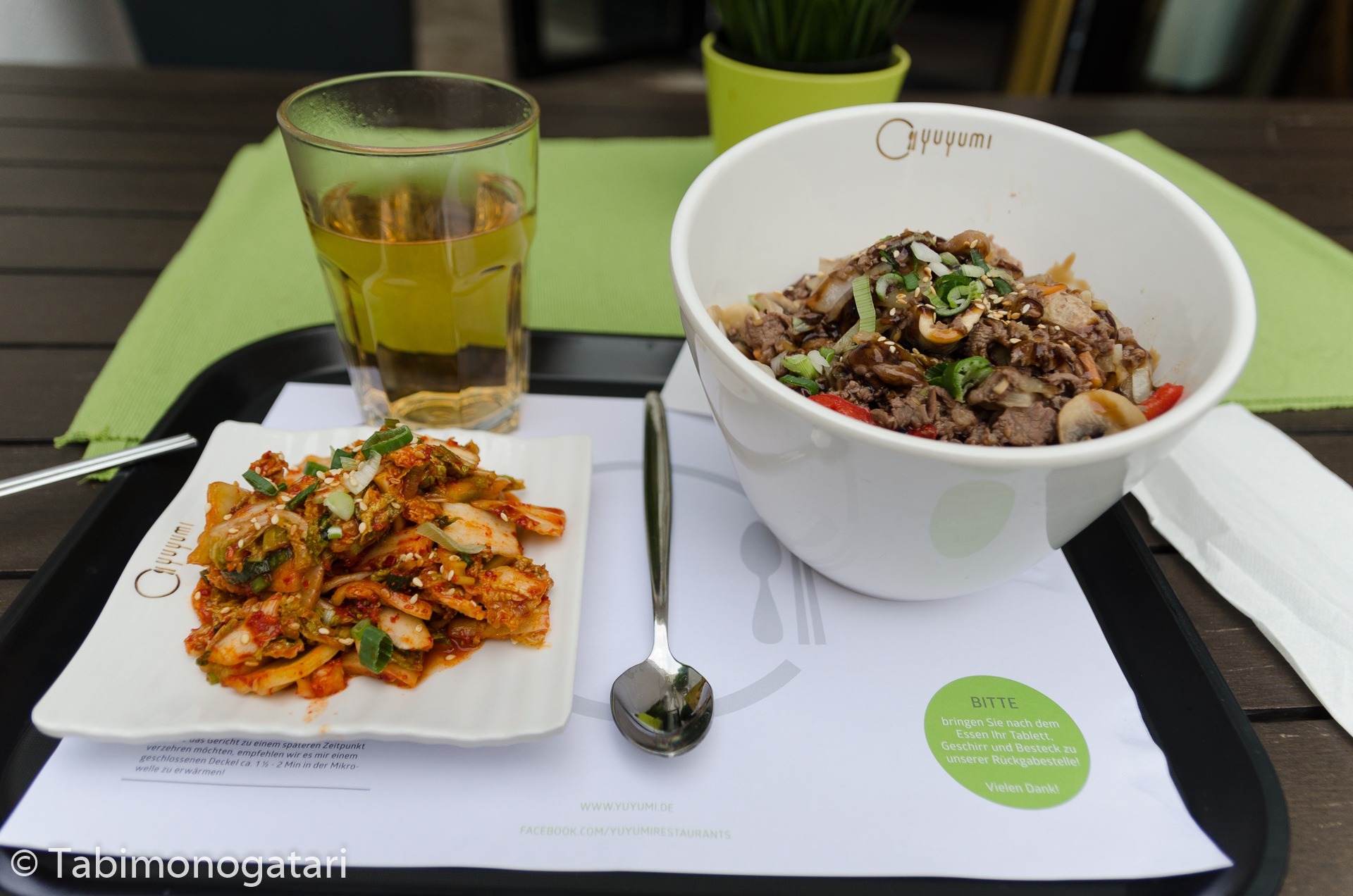 As the sun was just setting I decided to visit the Main Tower with its observatory platform. From my last visit I had a ticket left which I wanted to redeem now. Luckily the ticket was just valid until that day, so I took the lift up to the 54th floor and spend time in the cool breeze shooting photos of the setting sun over the skyline. 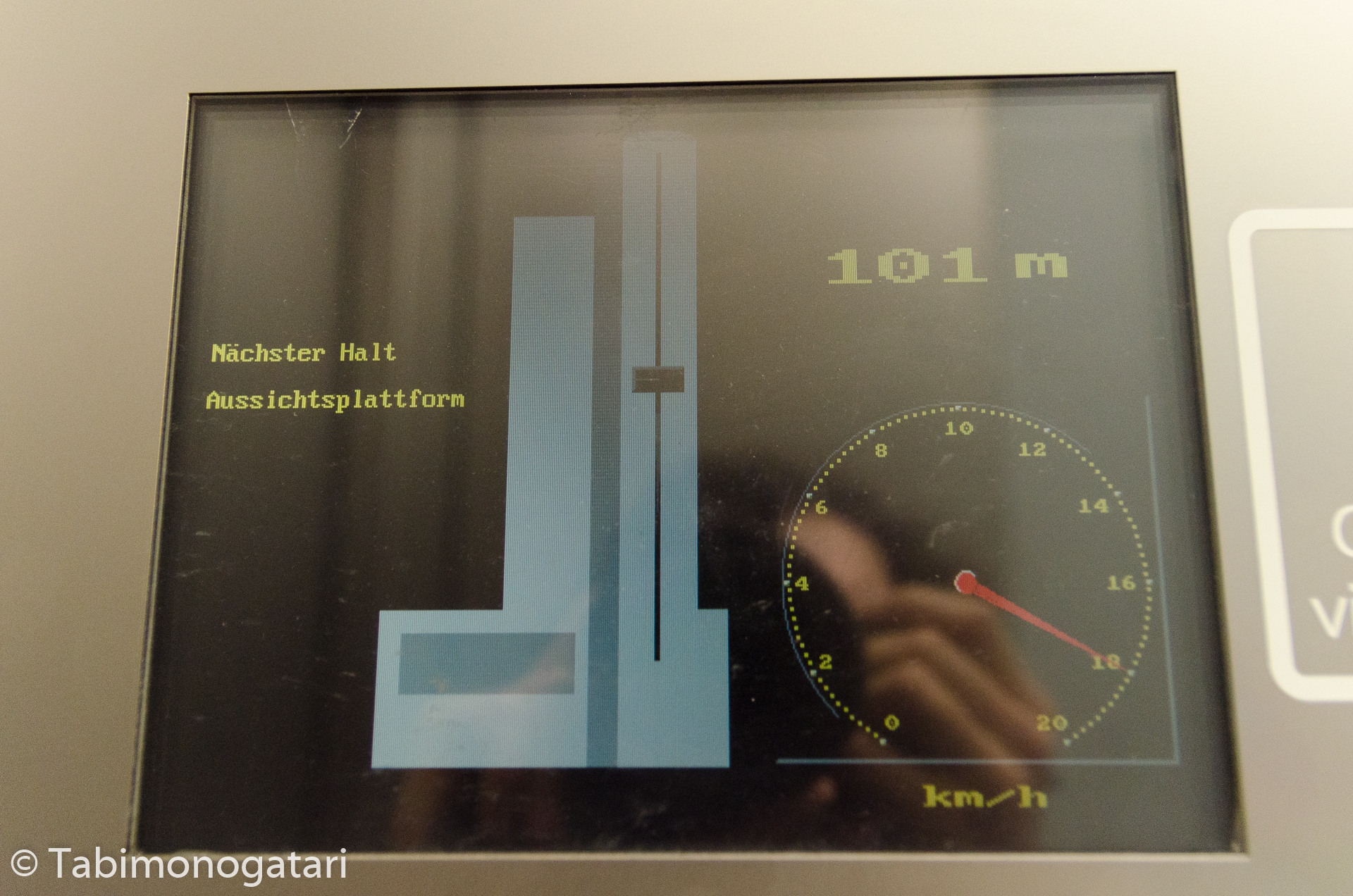 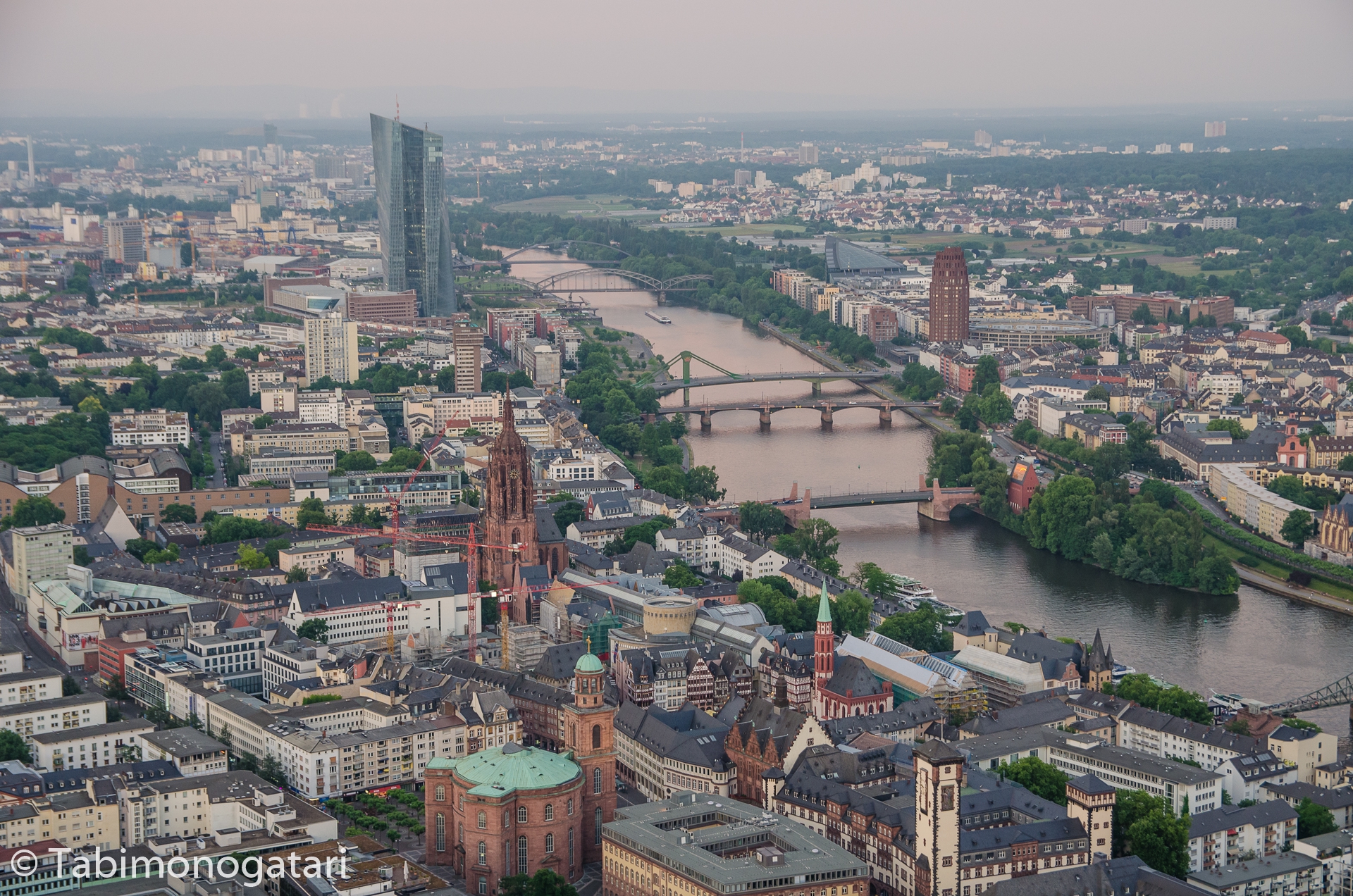 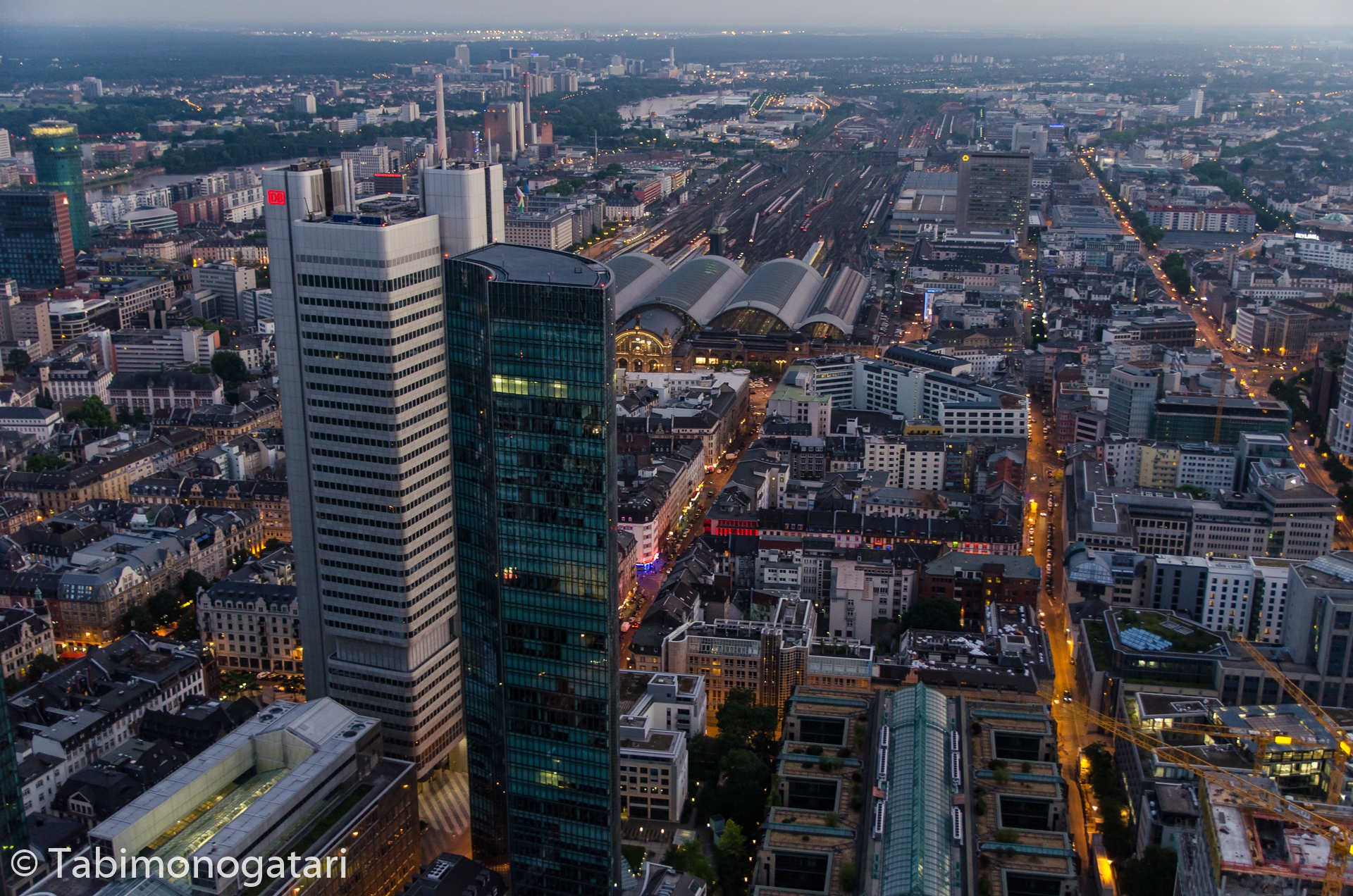 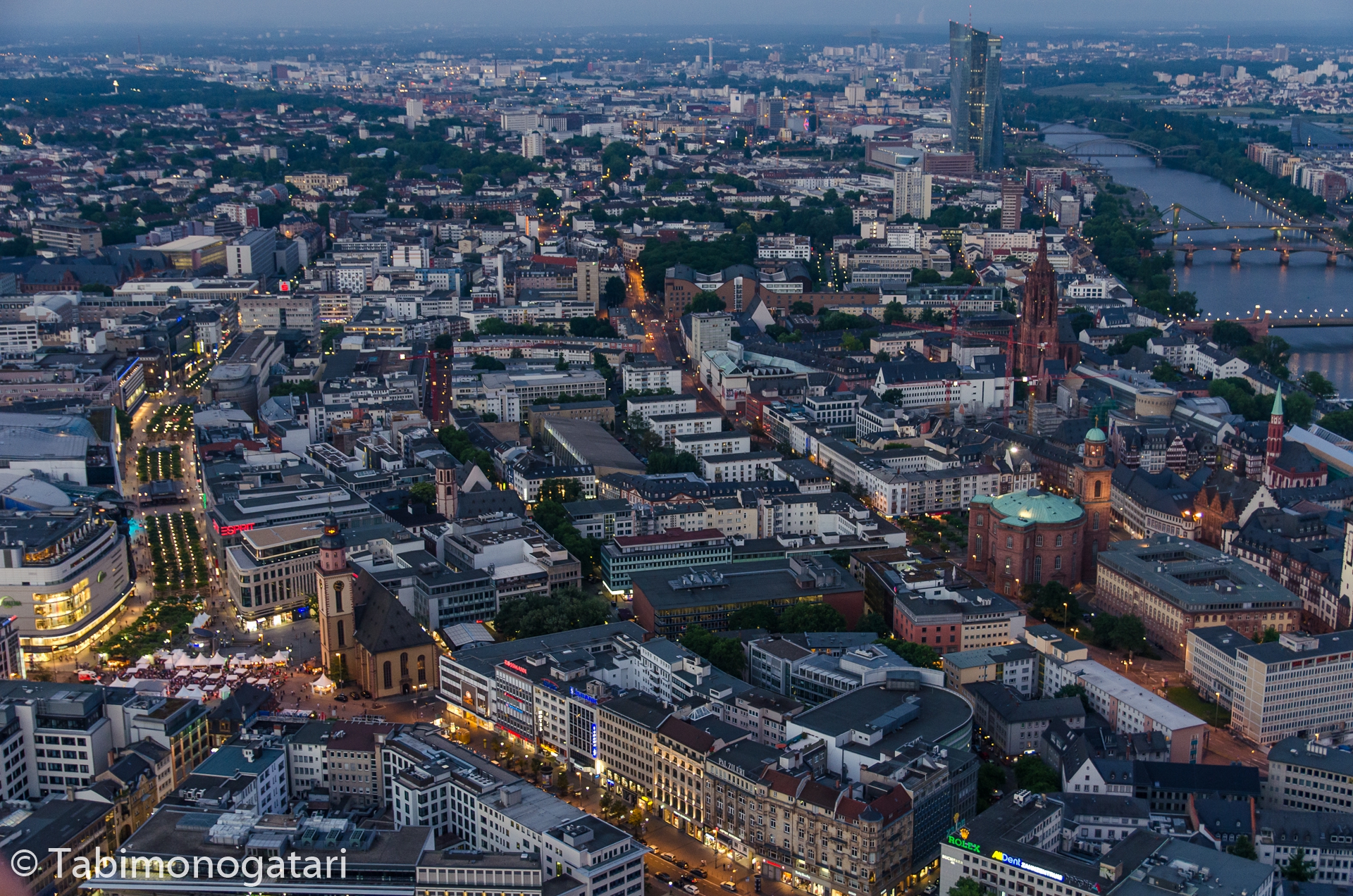 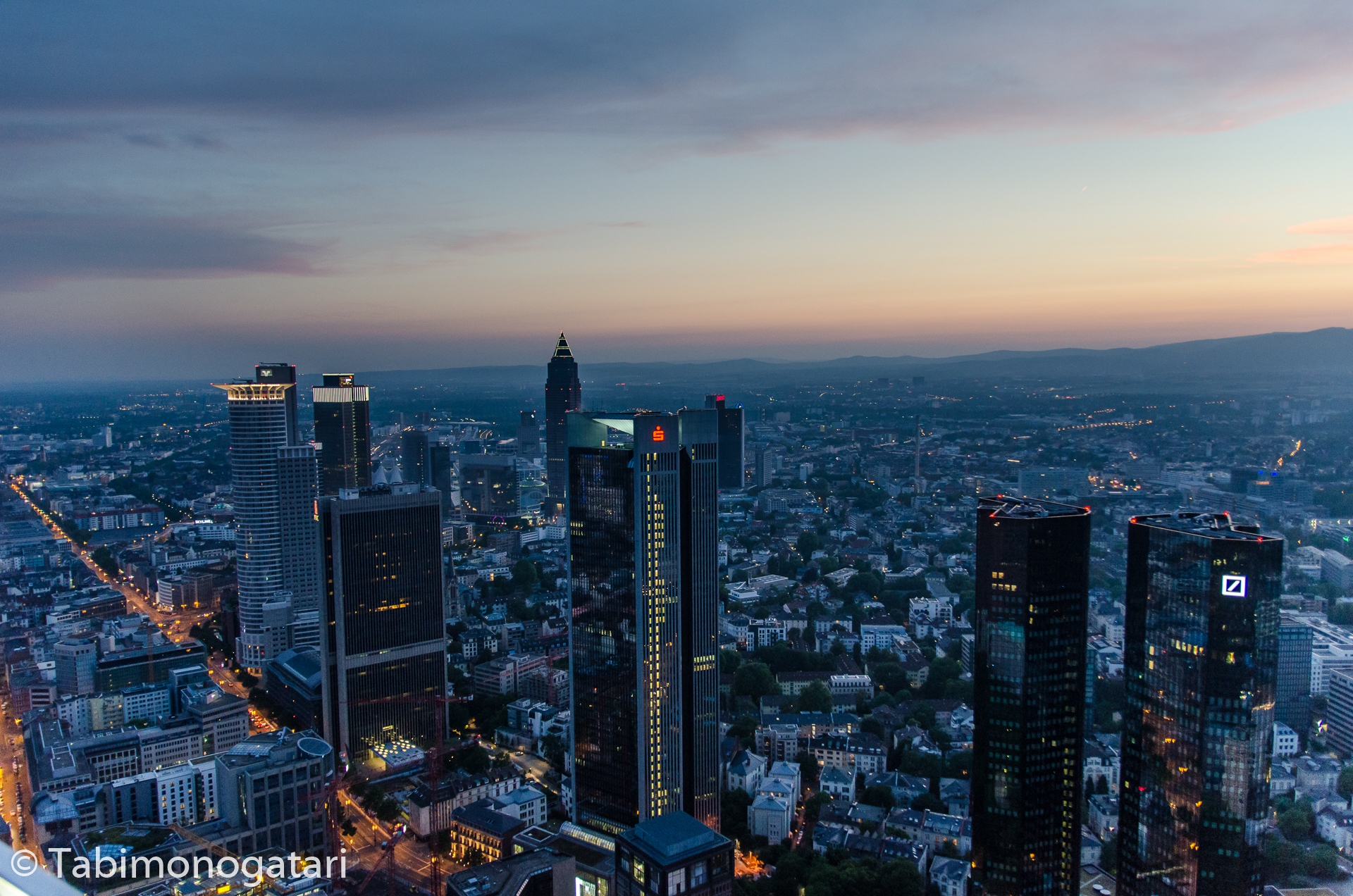 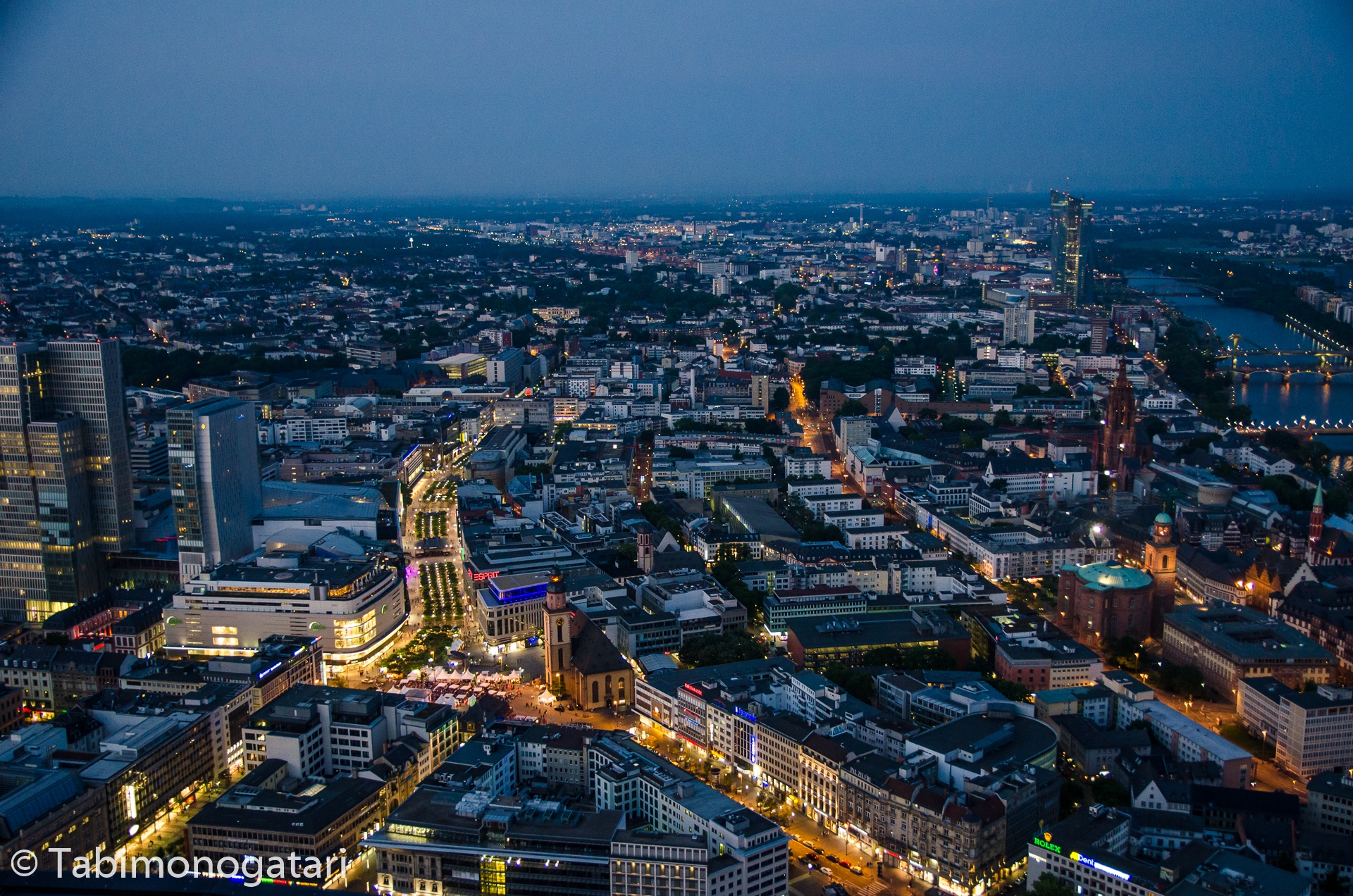 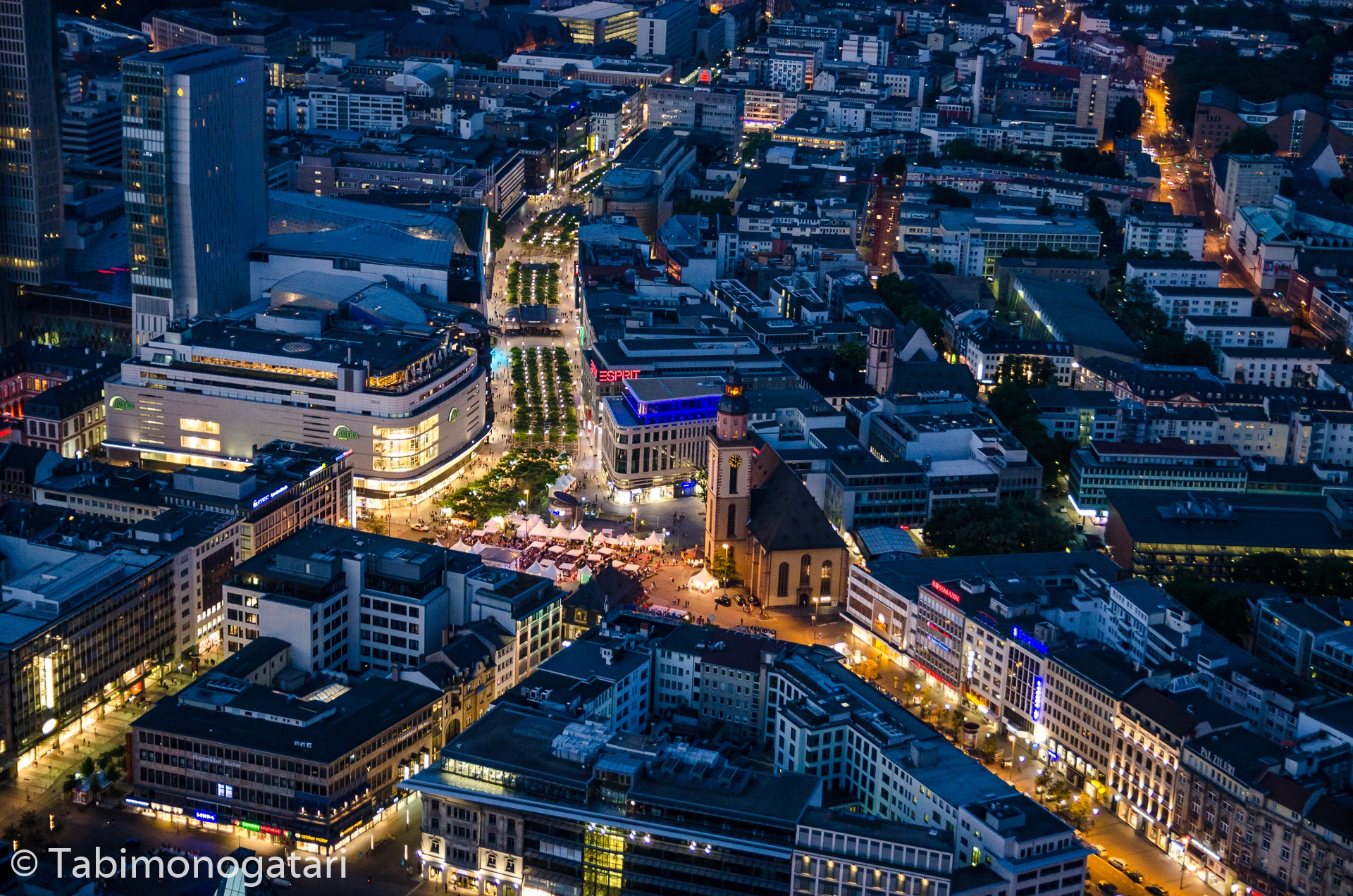 Before I left Frankfurt I came back to the Mousonturm to meet Shizuda, another colleague of mine who helped organising the event. We shared a “Frozen Beer” with beer foam from an ice maschine and exchanged over the films.

Nippon Connection was a great film festival for me and I am looking forward to next year’s addition.

A few more pictures can be found in the gallery.