From one Expo to the next. Just two weeks ago I visited the Japan Expo in Paris for the third time. Now, me and friends went to Italy to take a peek at the World Expo in Milan.

Visiting the Expo was vaguely planned for quite some time now, but just recently a concrete day came into sight when a friend of mine suggested that we should go and see the Japan day in mid July. In fact, every participating country has one day for presenting itself on the whole venue area. This would include special events and guests. So we decided, to visit the Expo on that specific Saturday. 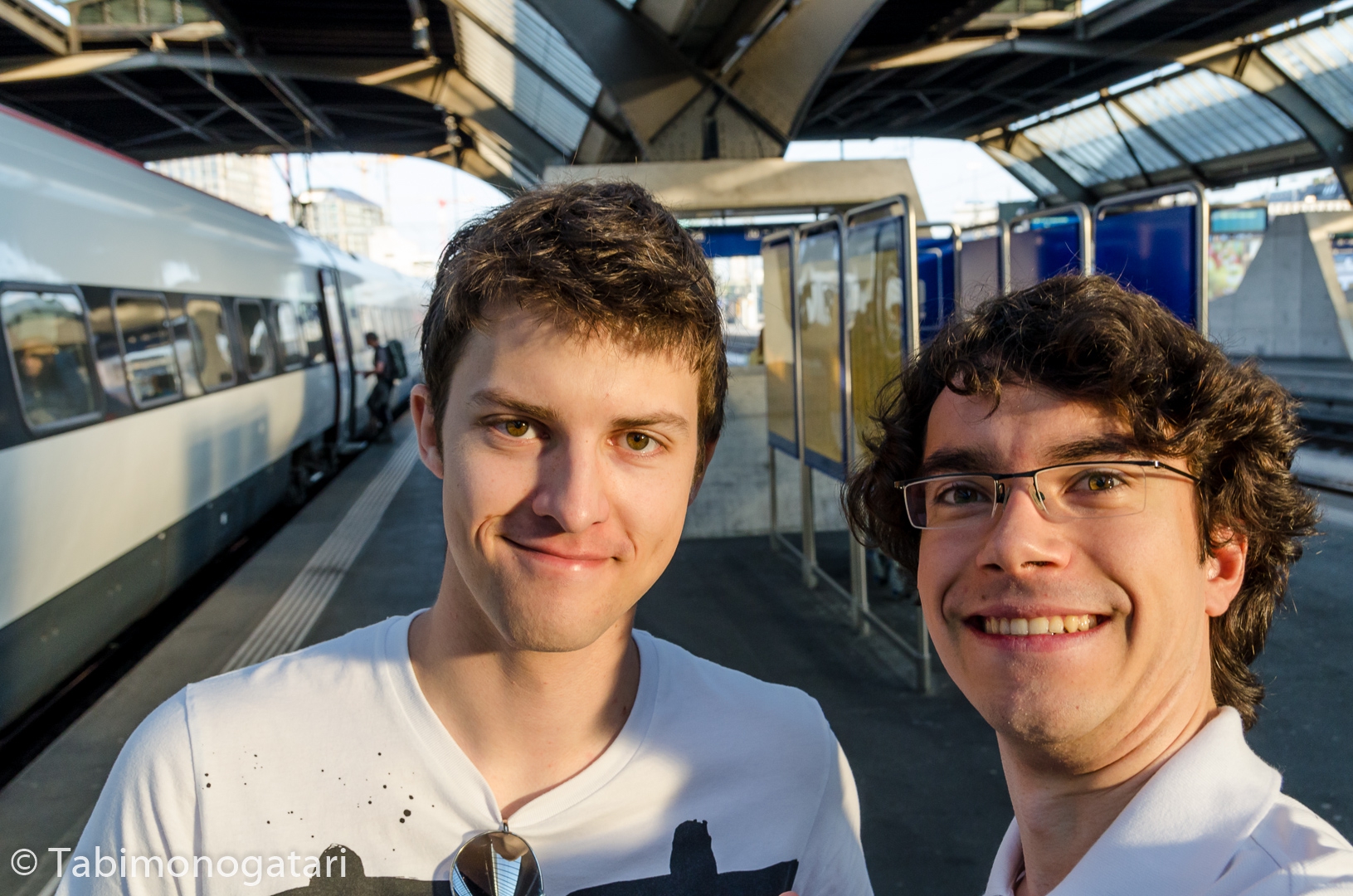 Due to time constraints we decided to make our visit a day-trip. Luckily there is a good train connection directly to the Expo venue from Zurich via Tessin. We met at Zurich main station early to get the most out of the day. Four hours and one transfer later we arrived at the exhibition station in the suburbs of Milan.

While it was far from empty, I did expect more of a crowd on a sunny Saturday. The admission was rather quick so we found ourselves on the area a few minutes later.

For your orientation, here is a map of the area. 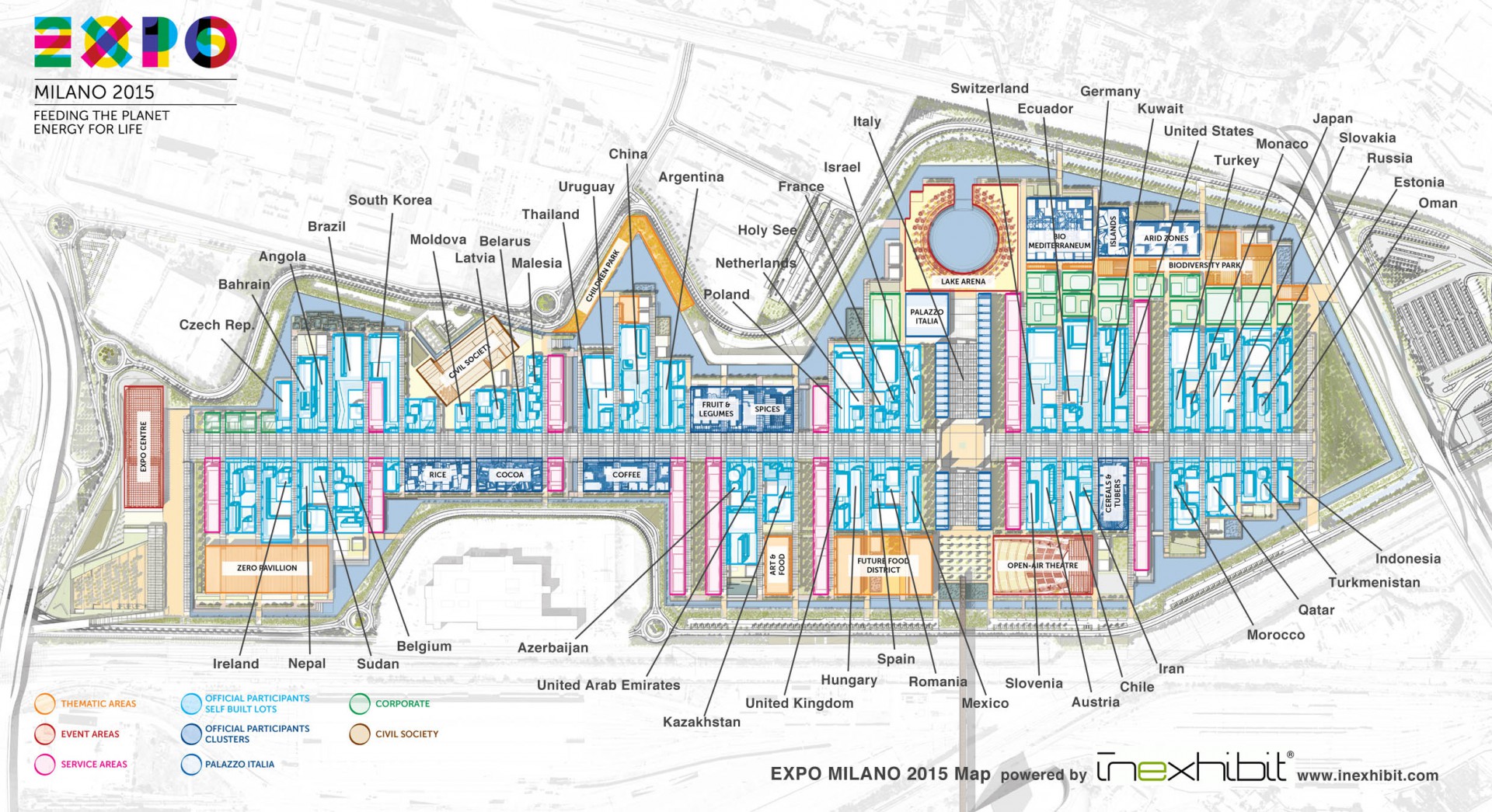 A circulating bus took us to the other side of the area. We briefly saw the Tree of Life as well as the pavilions of the European Union and Italy but moved on quickly, as we had more plans. 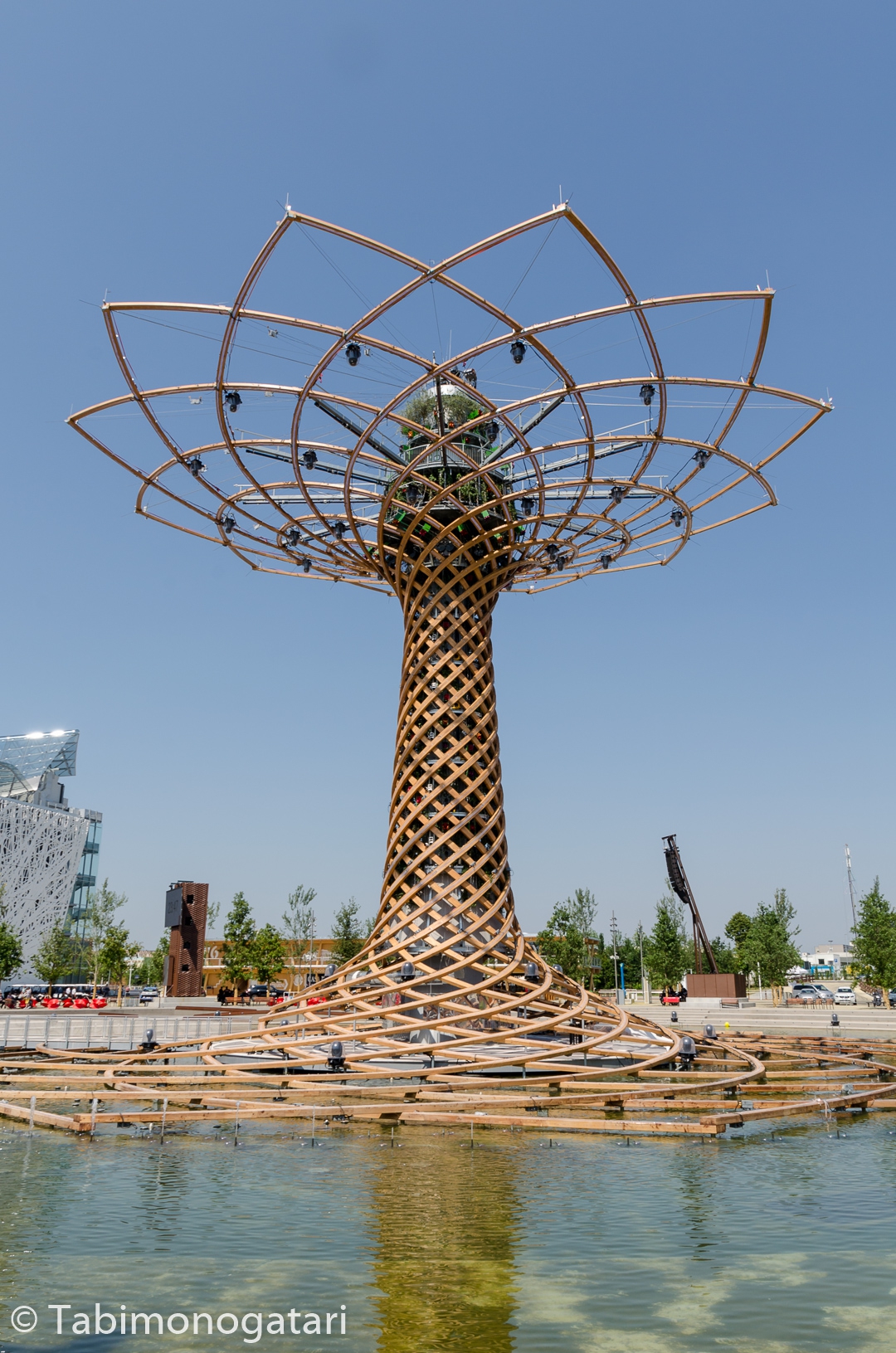 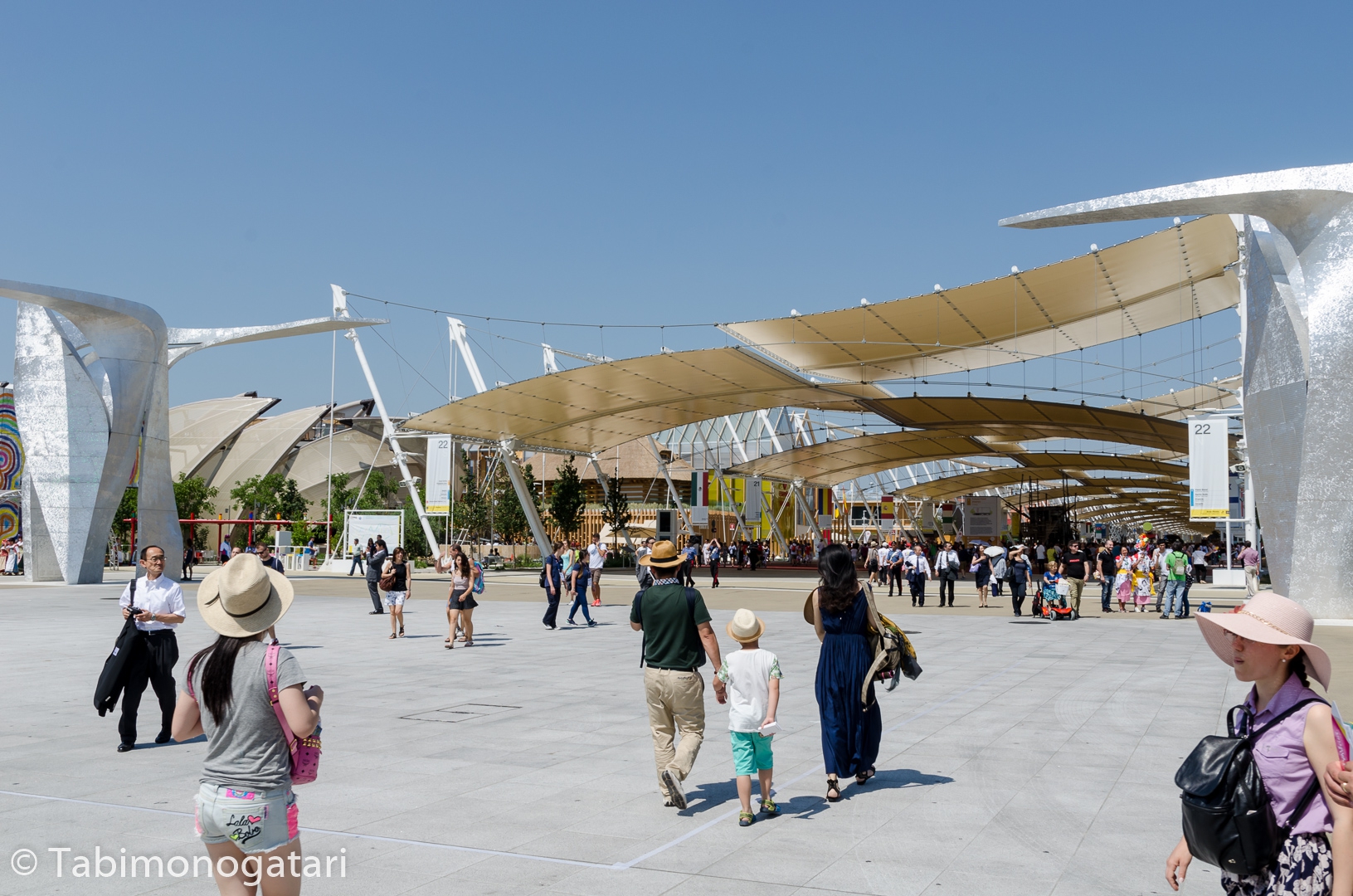 Our first stop was the Swiss pavilion, situated on the Eastern side of the venue. Luckily, most of our countries of interest were concentrated in that area, so we did not have to walk too far. From the media I heard something about the pavilion already. Apparently, there are four towers dispensing water, apples, salt and coffee beans. They were filled initially but will not be restocked again. The visitors have to decide how much they take with them without letting the stock run out before October. To me the choice of food items and the relation to Switzerland was only partially clear, but you might see through it by reading the official explanation.

It was just about noon, so no program was running at the time. We met two walking mascots though; they must have been sweating intensively beneath. Since entry was only permitted with prescheduled tickets we decided to leave out the interior area.

Right next to the Swiss is the German pavilion. The architecture of this building appealed much more to me than the Swiss one, but I am sure this is only because of my inherited bias. 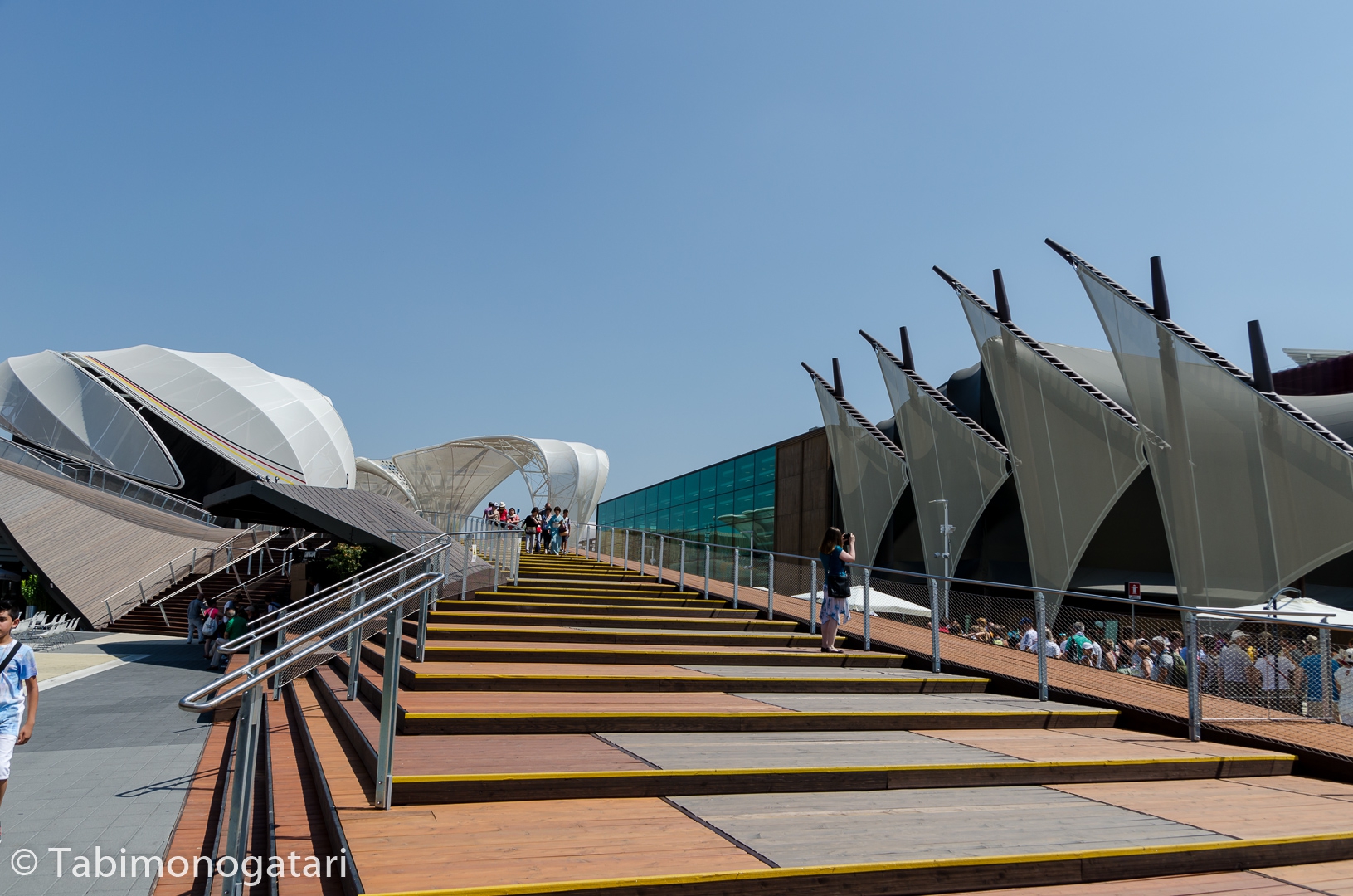 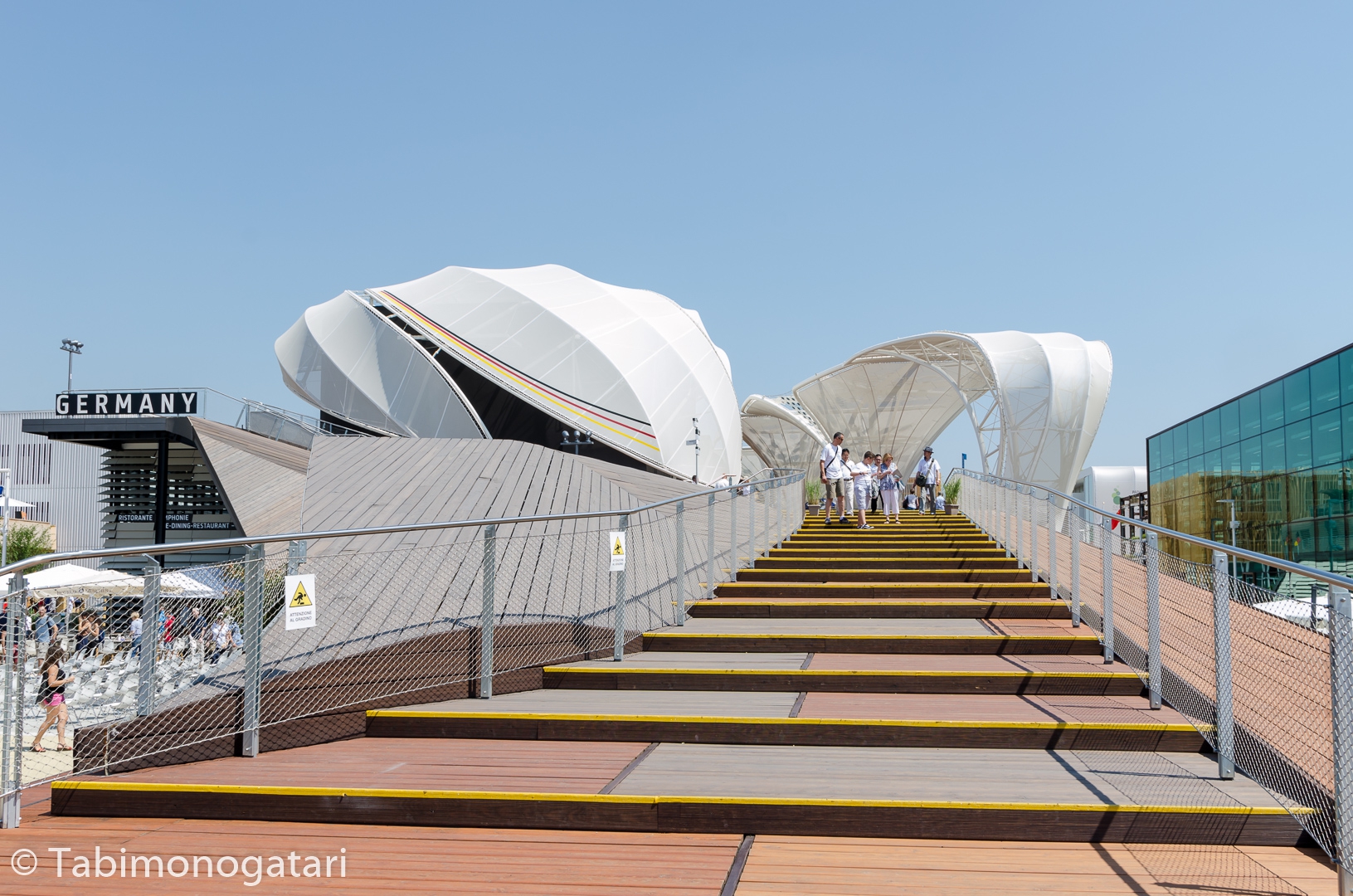 The roof was built to serve as a walkable deck with information panels about the sixteen states. The queue leading to the inner building discouraged us a bit, so we settled with lunch in the Bavarian restaurant in the shade instead. When looking through the menu I was quite delighted as there were several typical German dishes listed that I did not have for some time. We chose Hofbräu beer to go with Currywurst and a Sauerkraut platter. In that moment I noticed again that wheat beer and „Radler“ are rarely on the menu in Switzerland. And I miss the potato salad of southern Germany, the one without mayonnaise. 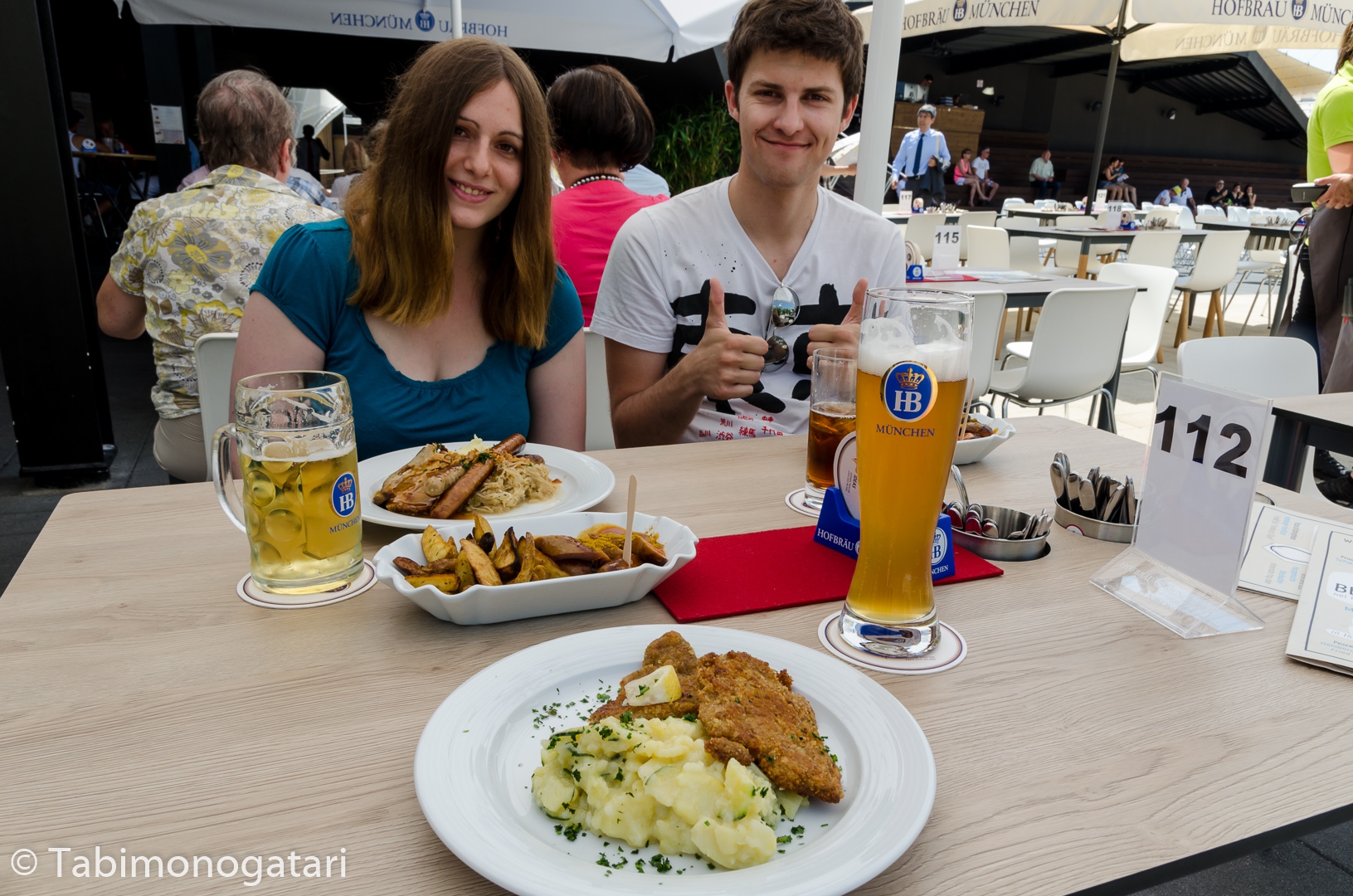 After the satisfying meal we headed to the Japanese pavilion just a few houses away. On the main street were several props lined up for the parade later the day. 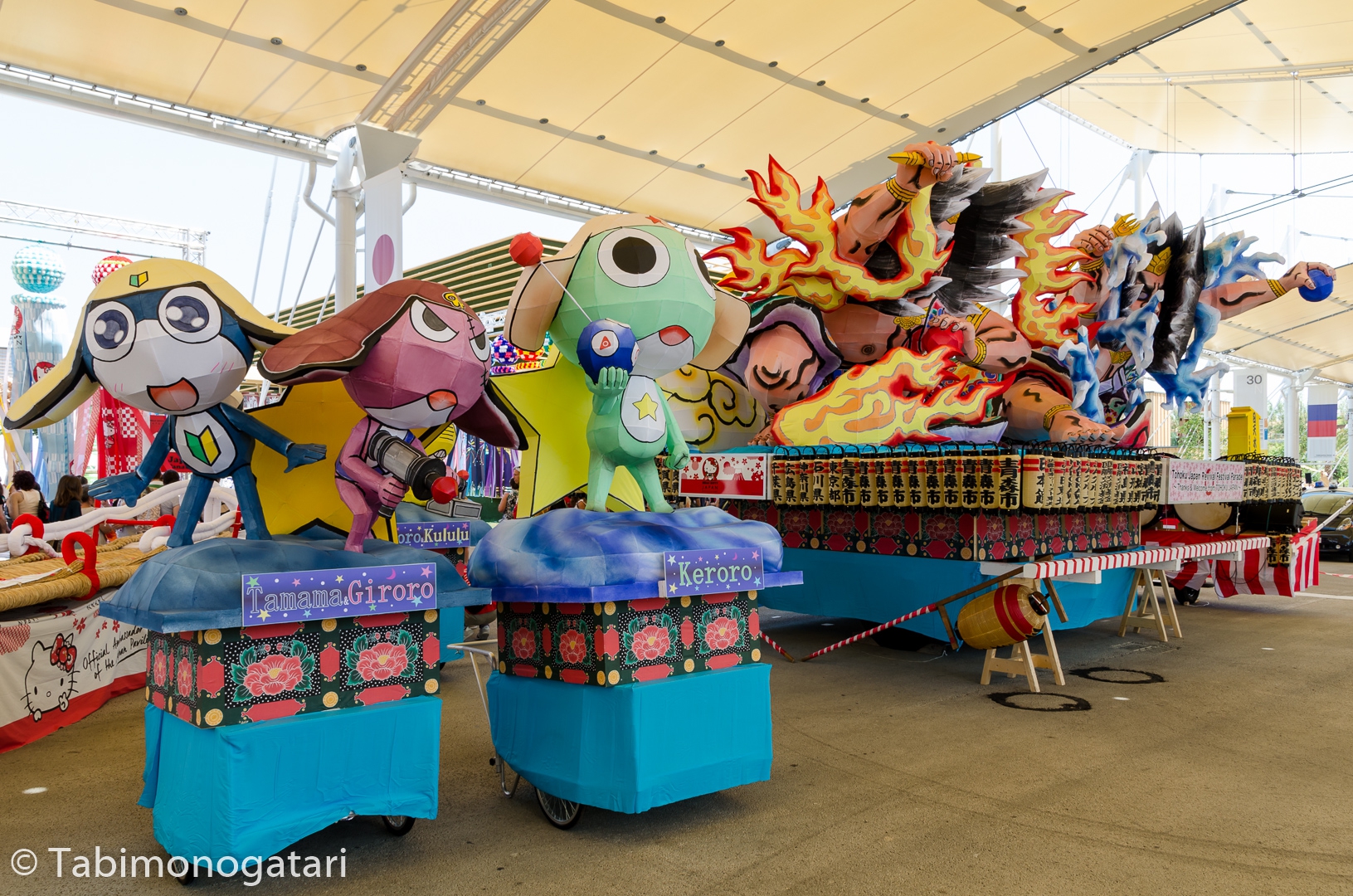 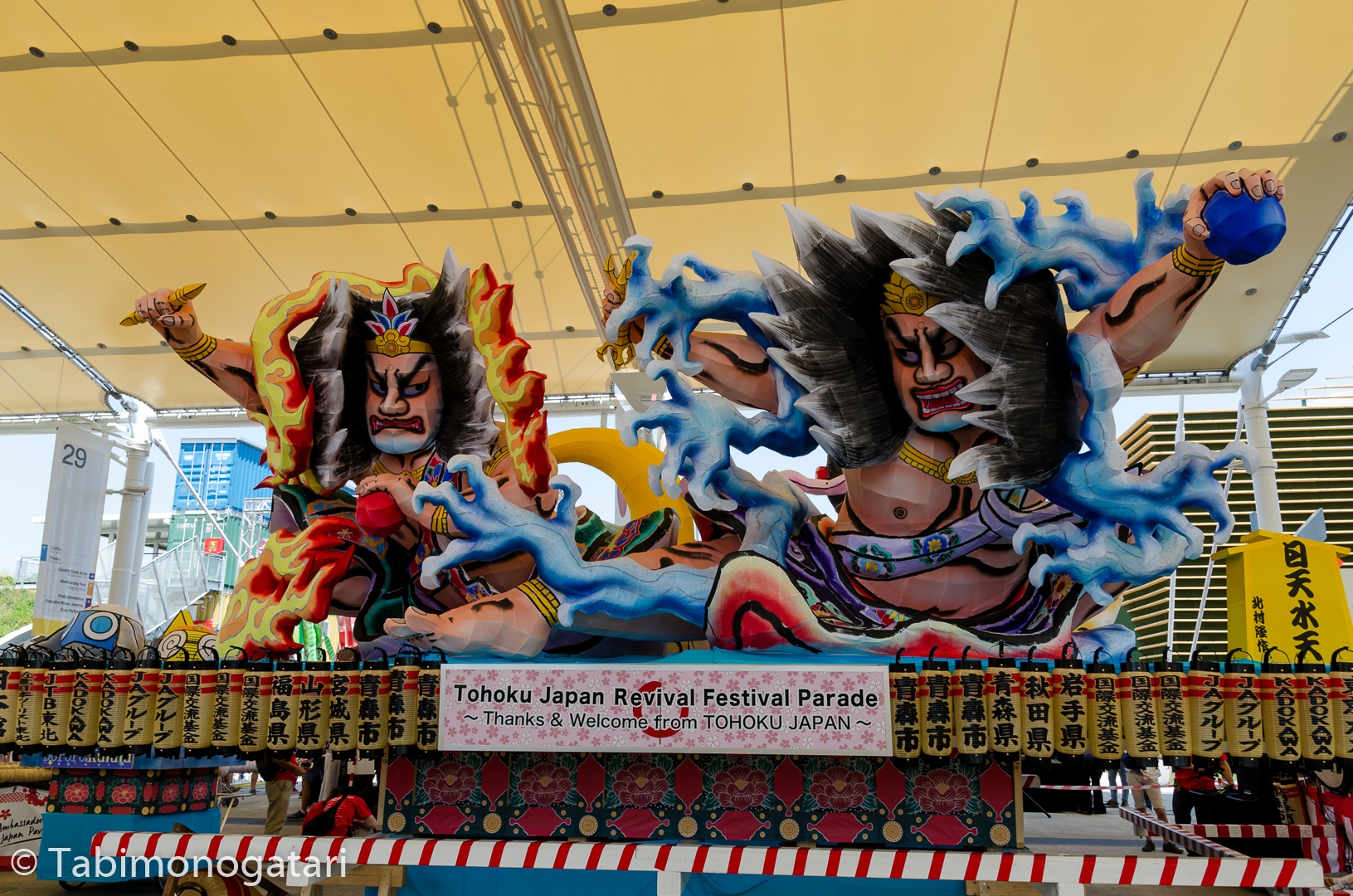 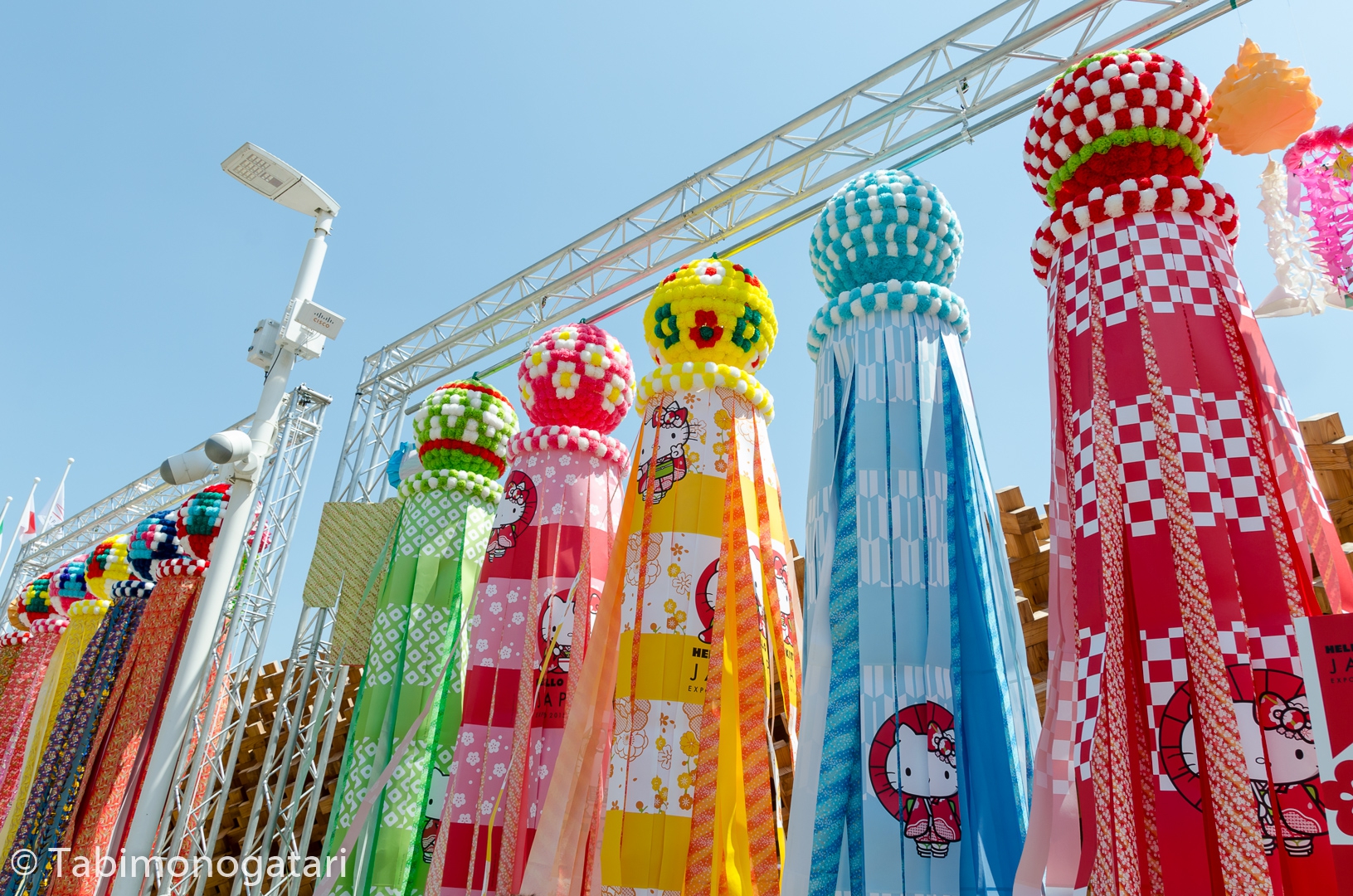 Around the building there was already a long queue. Although it was hot, we decided to endure it and hoped that the queue would move quickly as the admission was scheduled to start in ten minutes. Of course, we were too naïve, the only people entering for some time were VIP who were invited though a passage right in front of where we stood. Half an hour later we found ourselves at the beginning of the real queue with a sign indicating a waiting time of another two hours from there. While waiting we had plenty of time to admire the outer structure, built from interlaced wooden bars completely free from screws or nails. 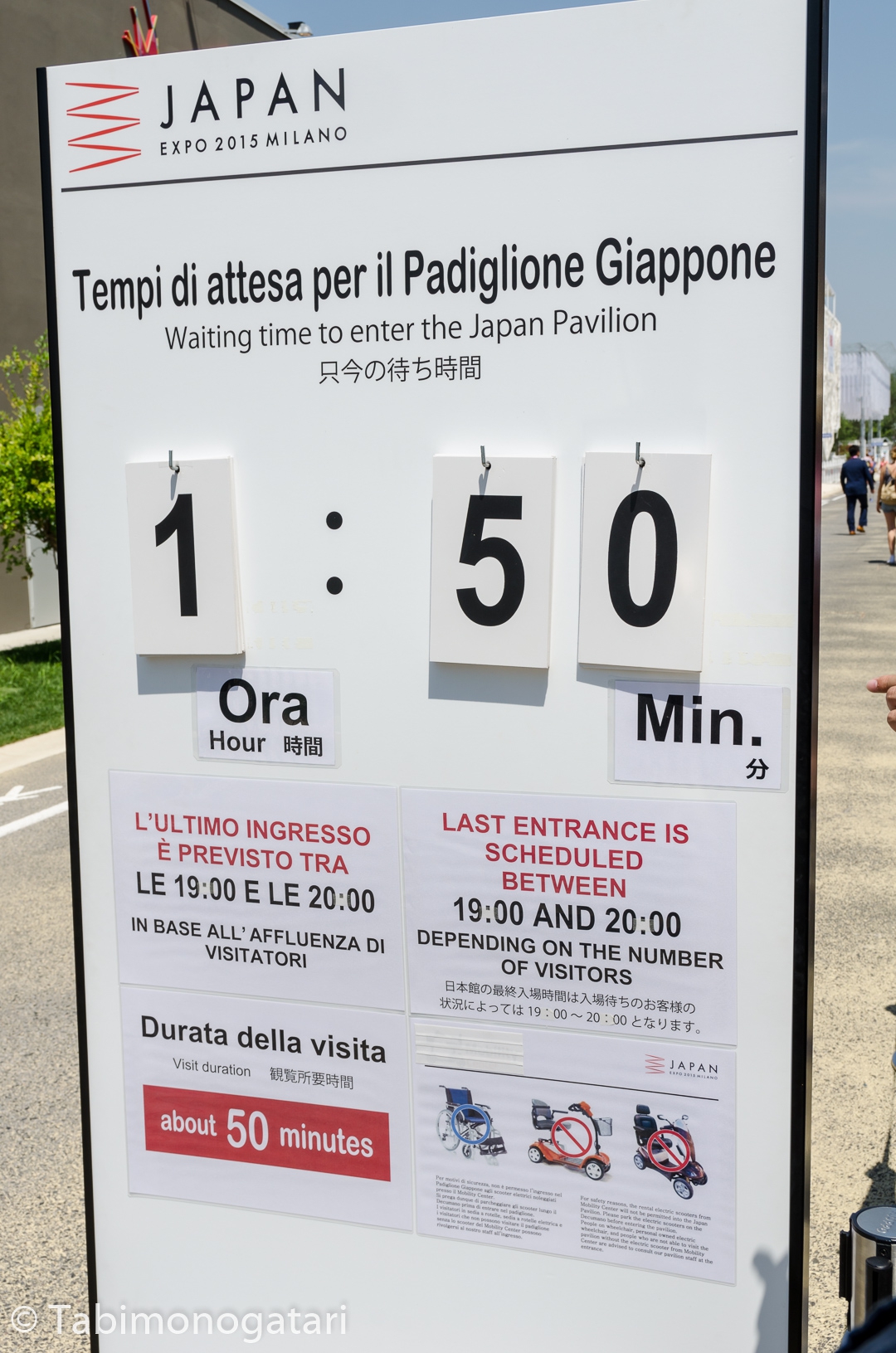 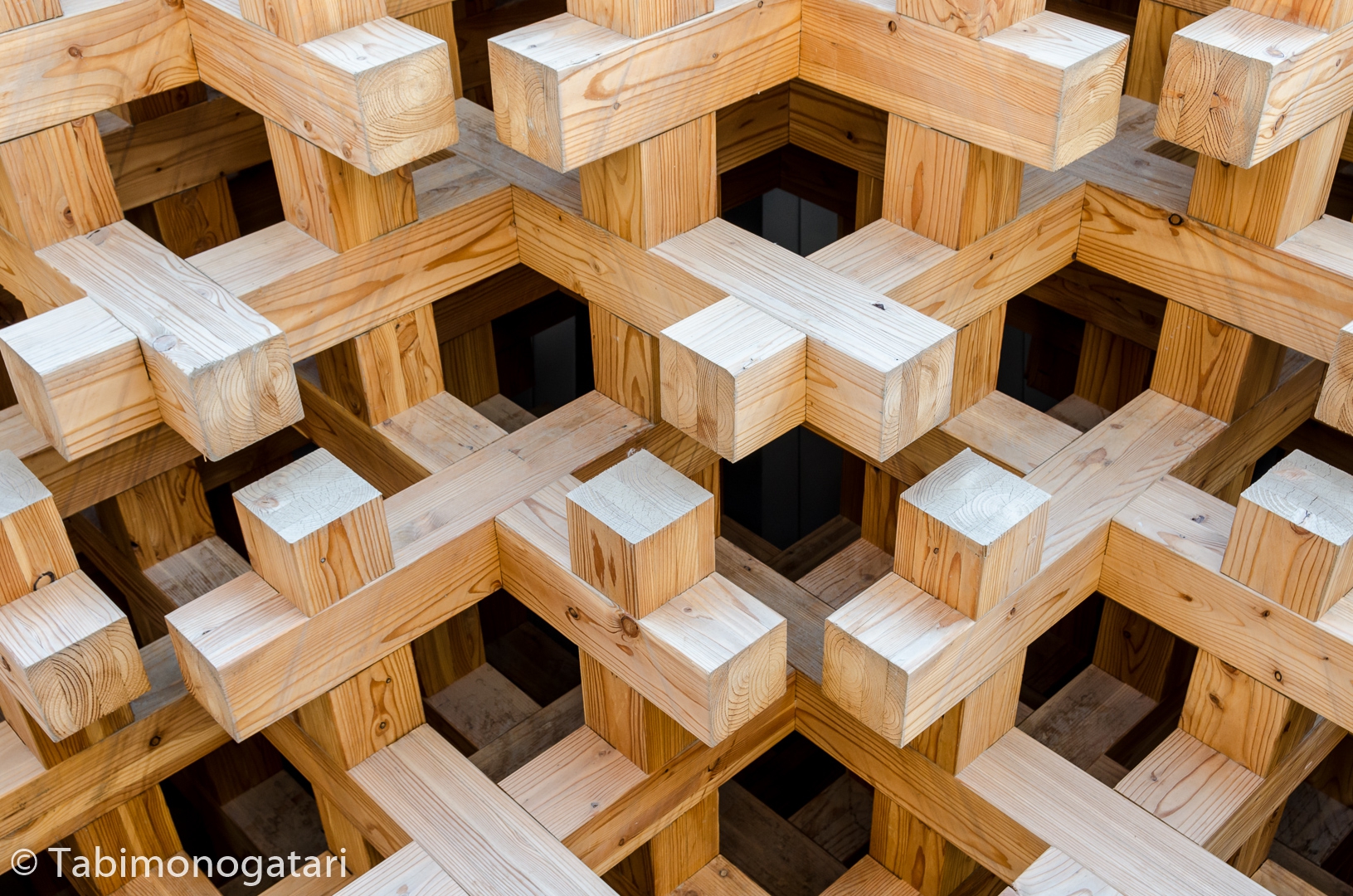 In front of us was waiting a group of two Italian and one Japanese person. We started a conversation and so time passed a bit faster. Eventually we stood before a big door and a staff member gave a short explanation.

Then, I finally understood why the queue was moving that slow. Visitors were not gradually but continuously invited, but instead in intervals in groups of thirty person. Every room was occupied with one group at a time and the content was prepared to give an ideal experience those currently inside. That way of thought is typical Japanese for me.

Inside we experienced high-tech multimedia presentation. The first part was about Japanese crafts, then the theme passed over to modern applications related to food. 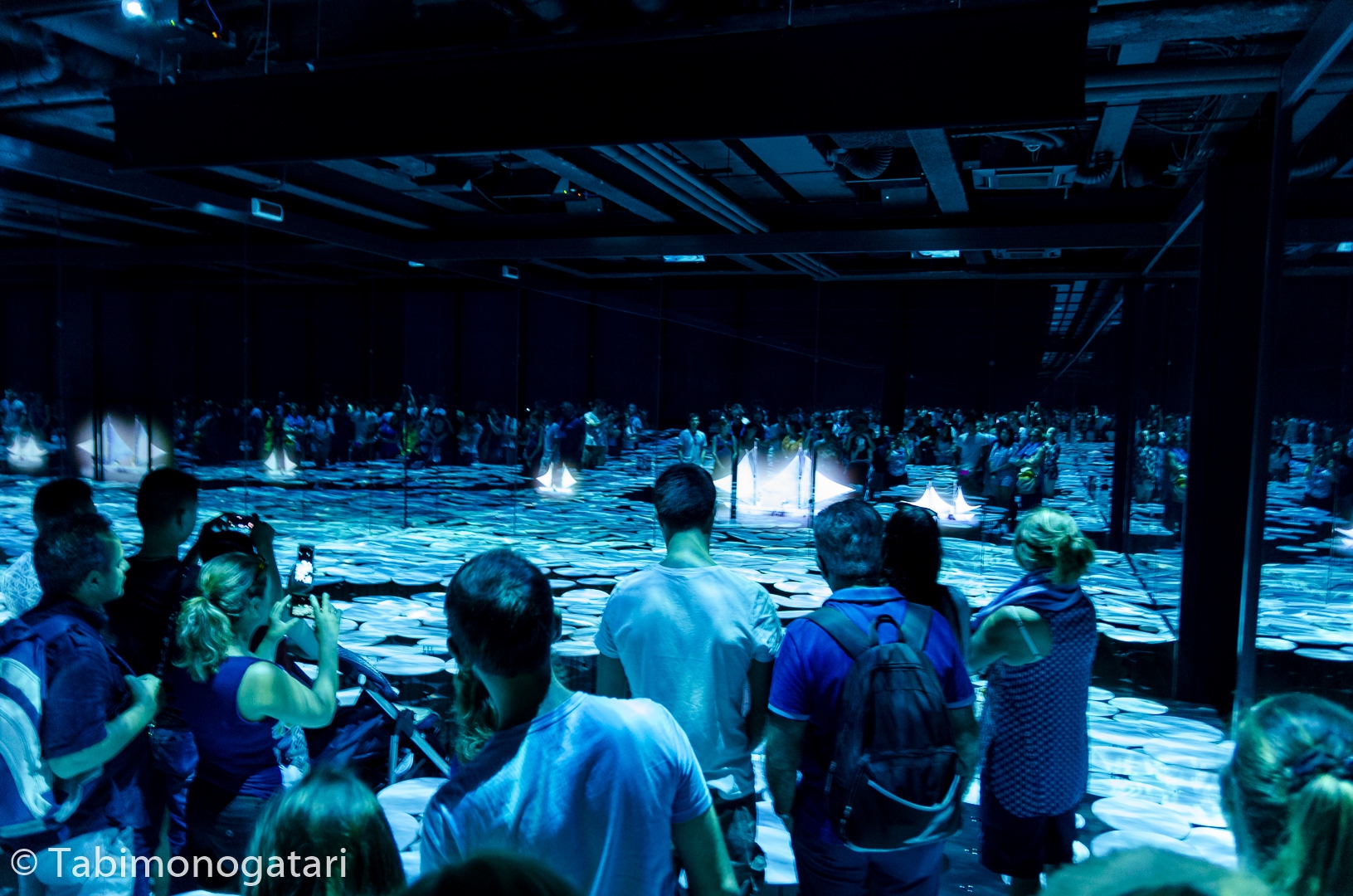 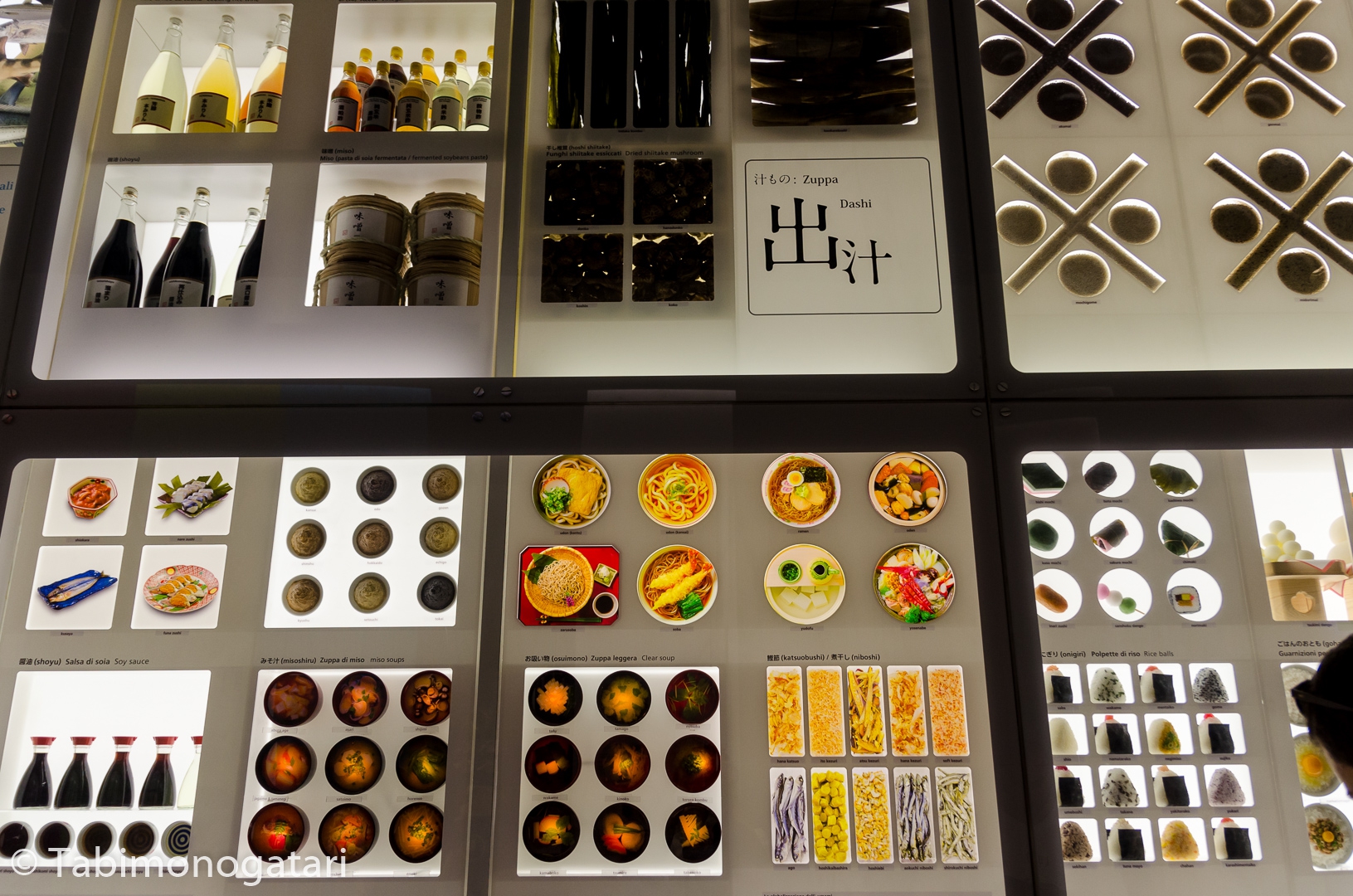 The highlight was the last room, a particularly large and circular one. When everyone was seated at the tables we were welcomed by two moderators who introduced us to the „Future Restaurant“. Instead of being served real food we took a culinary trip on the touchscreen and interacted with it using ordinary wooden chopsticks. In the end they even sang something while people riding autonomous robots on wheels circled the room. 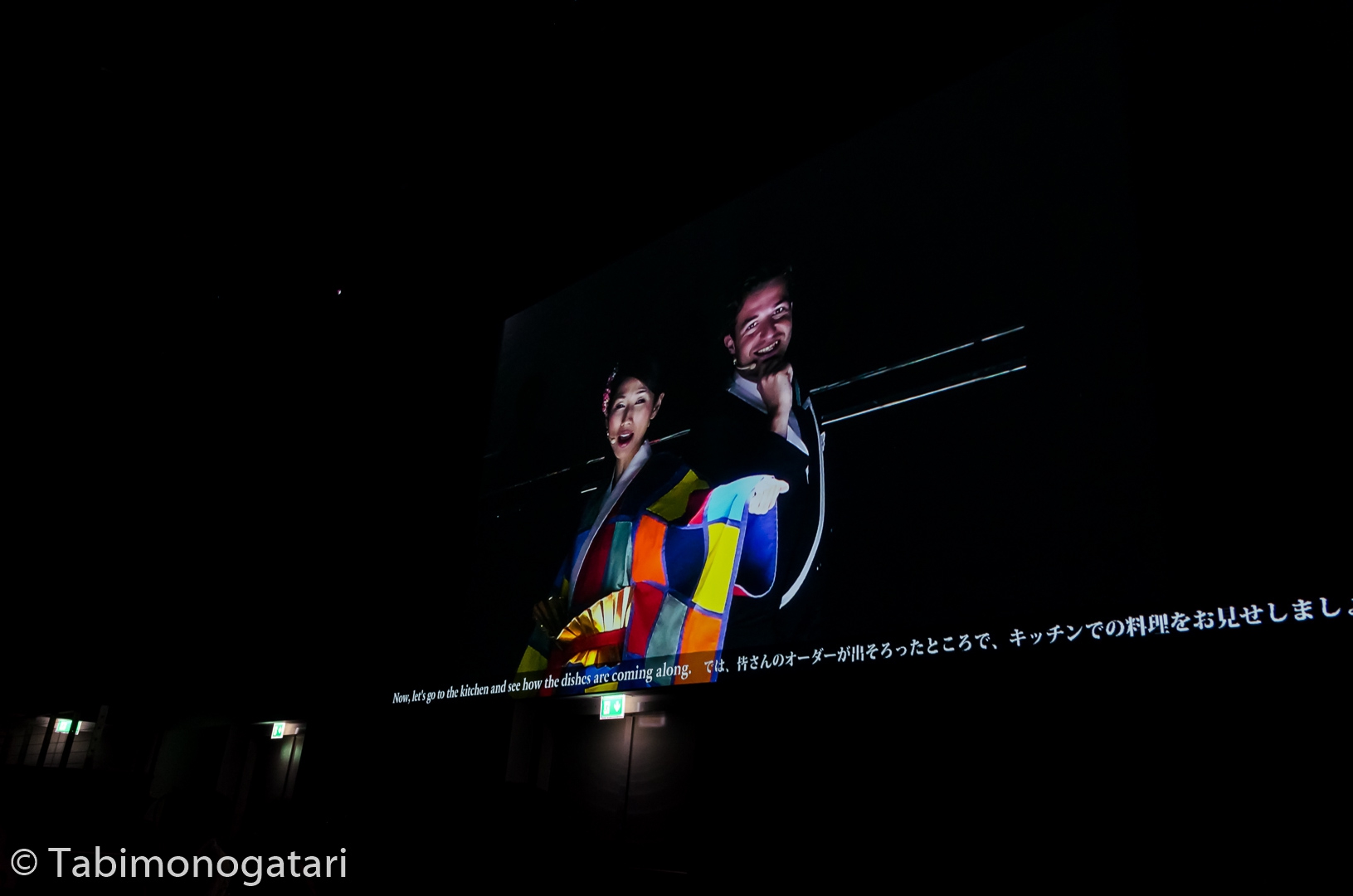 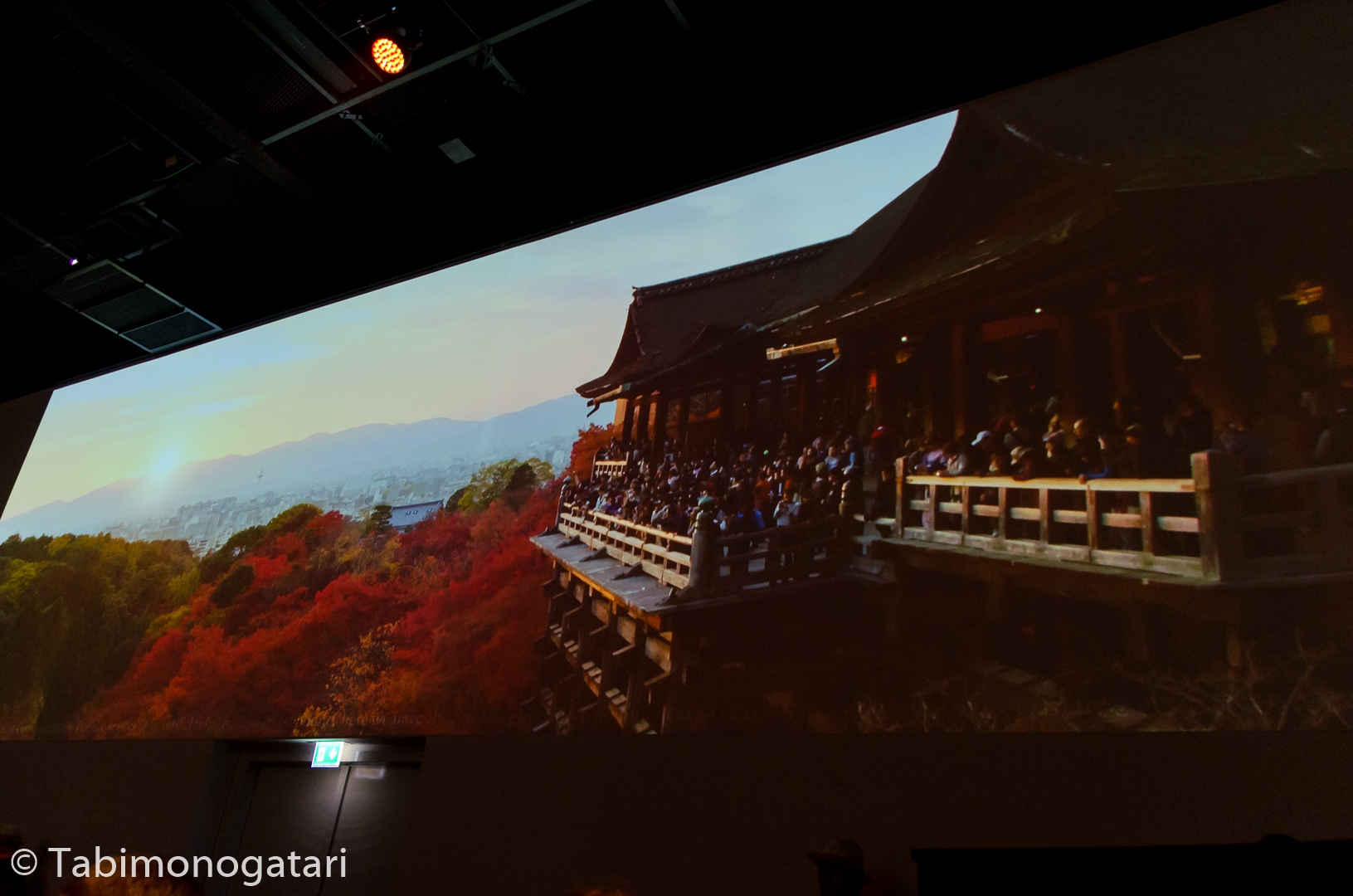 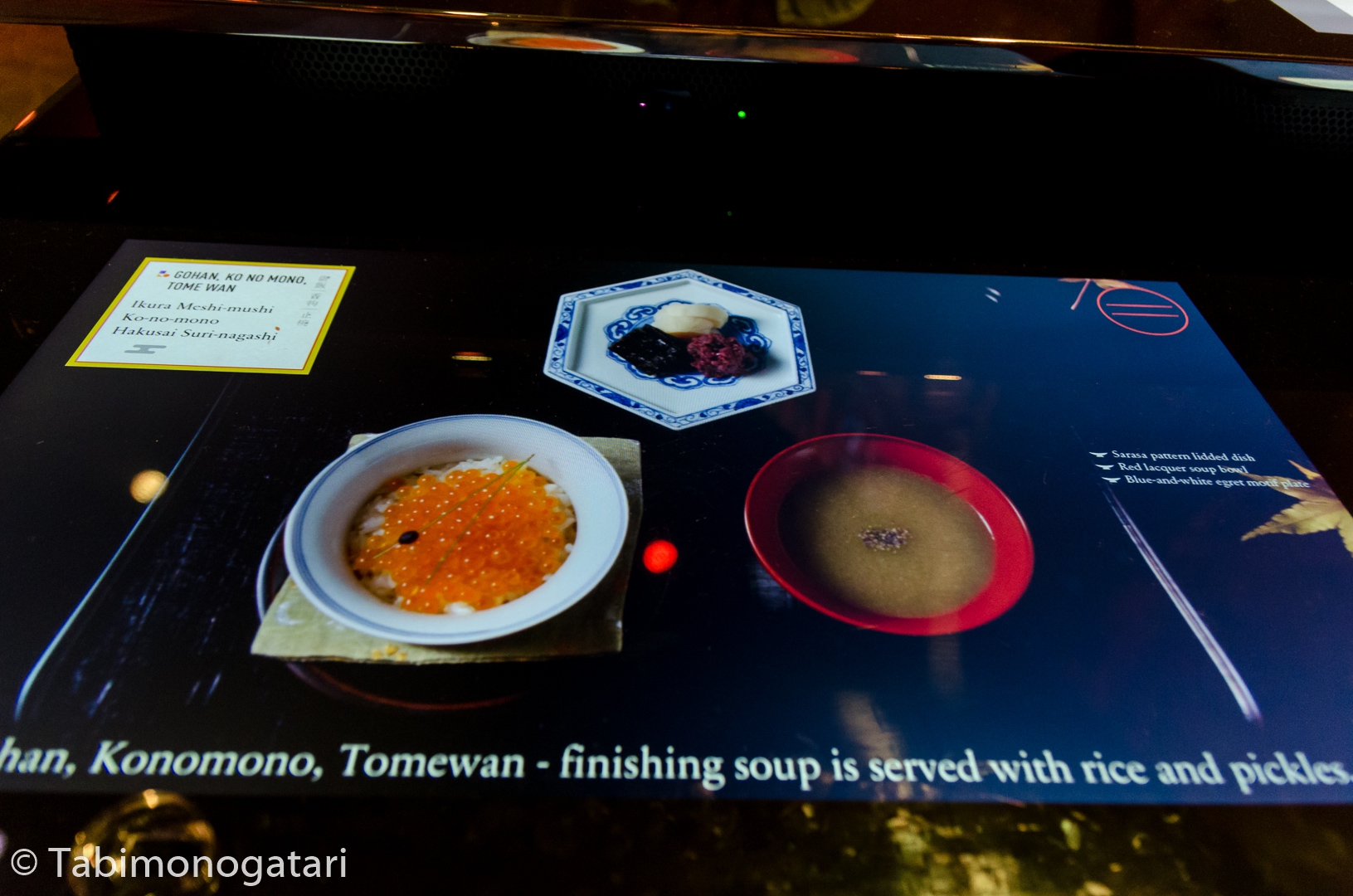 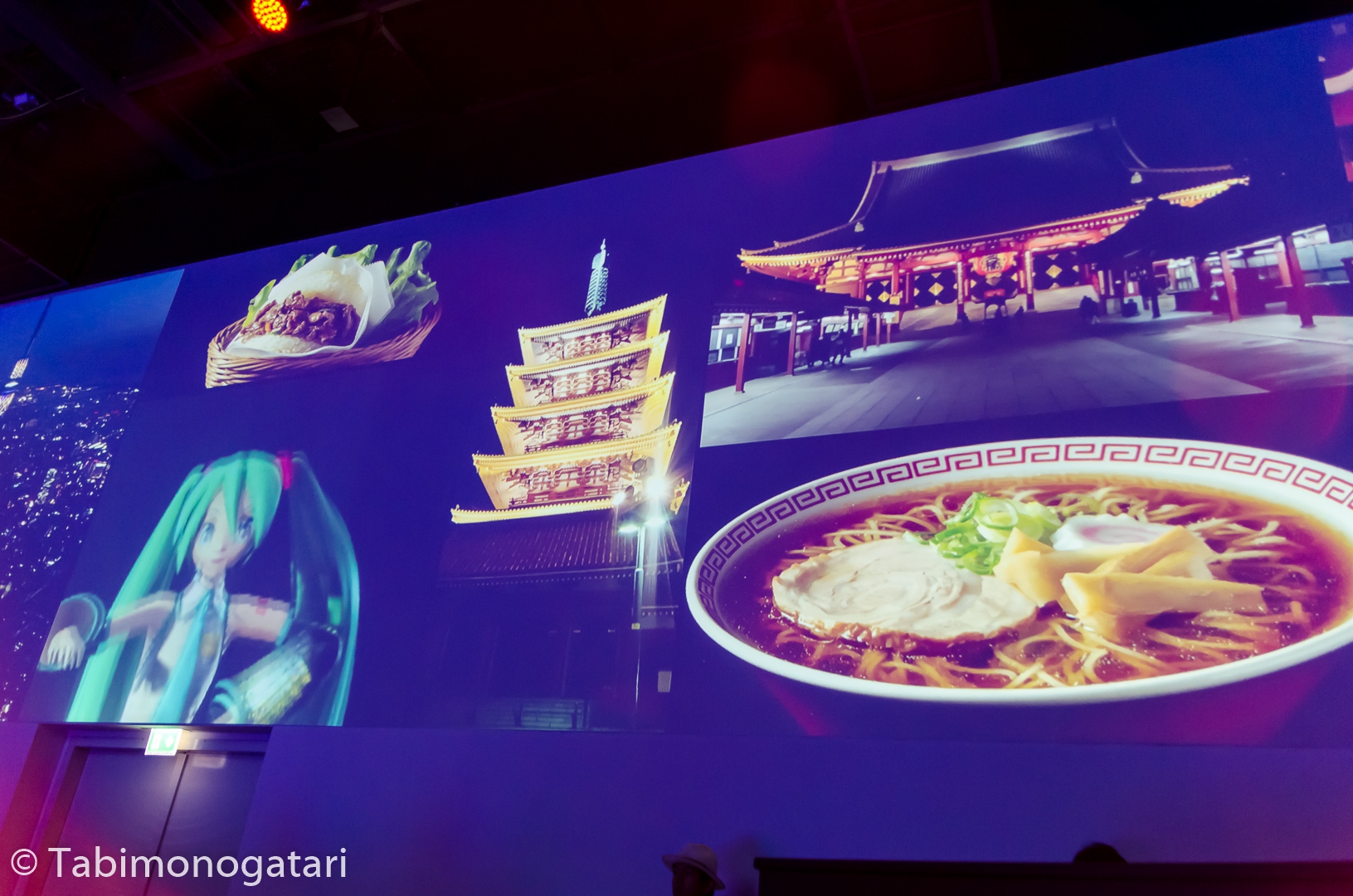 Have a look at these two videos for more impressions of the pavilion – first from the point of view of the exhibitor and then from a visitor.

After that experience we were sent off to the food court – what a clever insight of the designer. Obviously we went for another bite and met up with the people from before to share our meal. I took the opportunity to have a MOS Burger, which I had last time when I was in Kumamoto. The others went for the same, as well as curry, tempura and soba. To practise my Japanese I talked a bit with the Japanese man, who was from Kumamoto and lives in Italy now. He was very happy to hear that I visited his home prefecture. 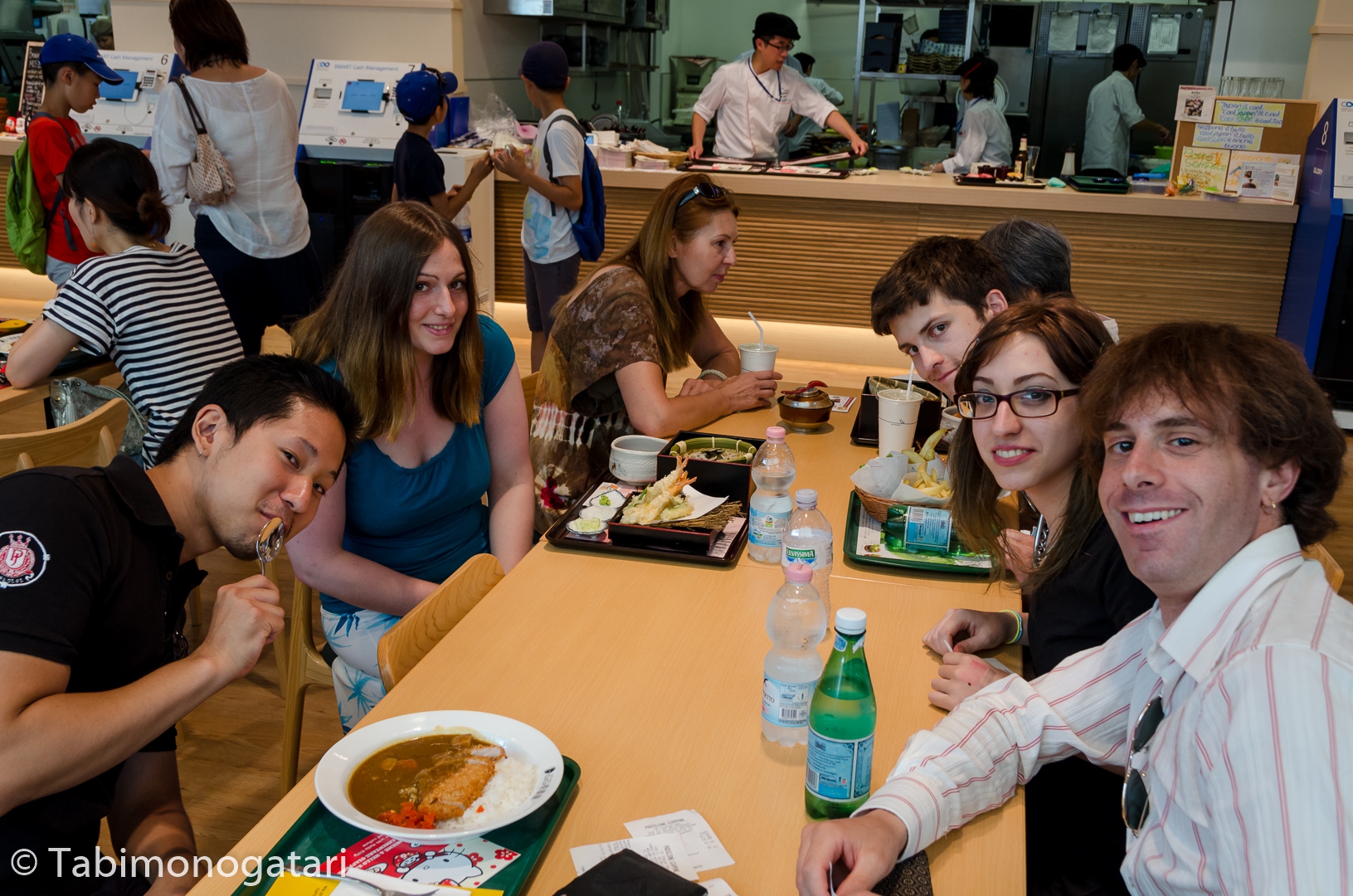 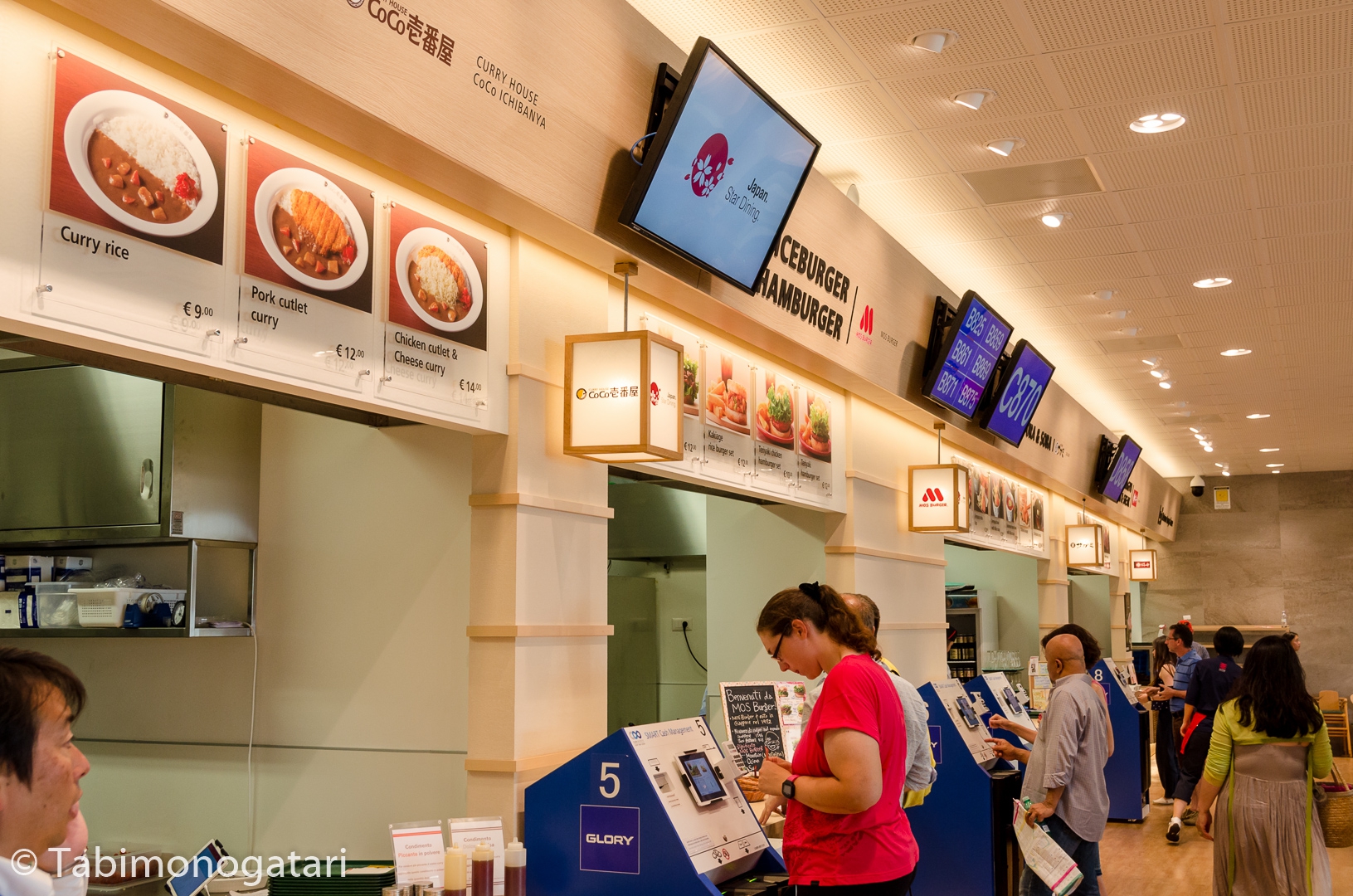 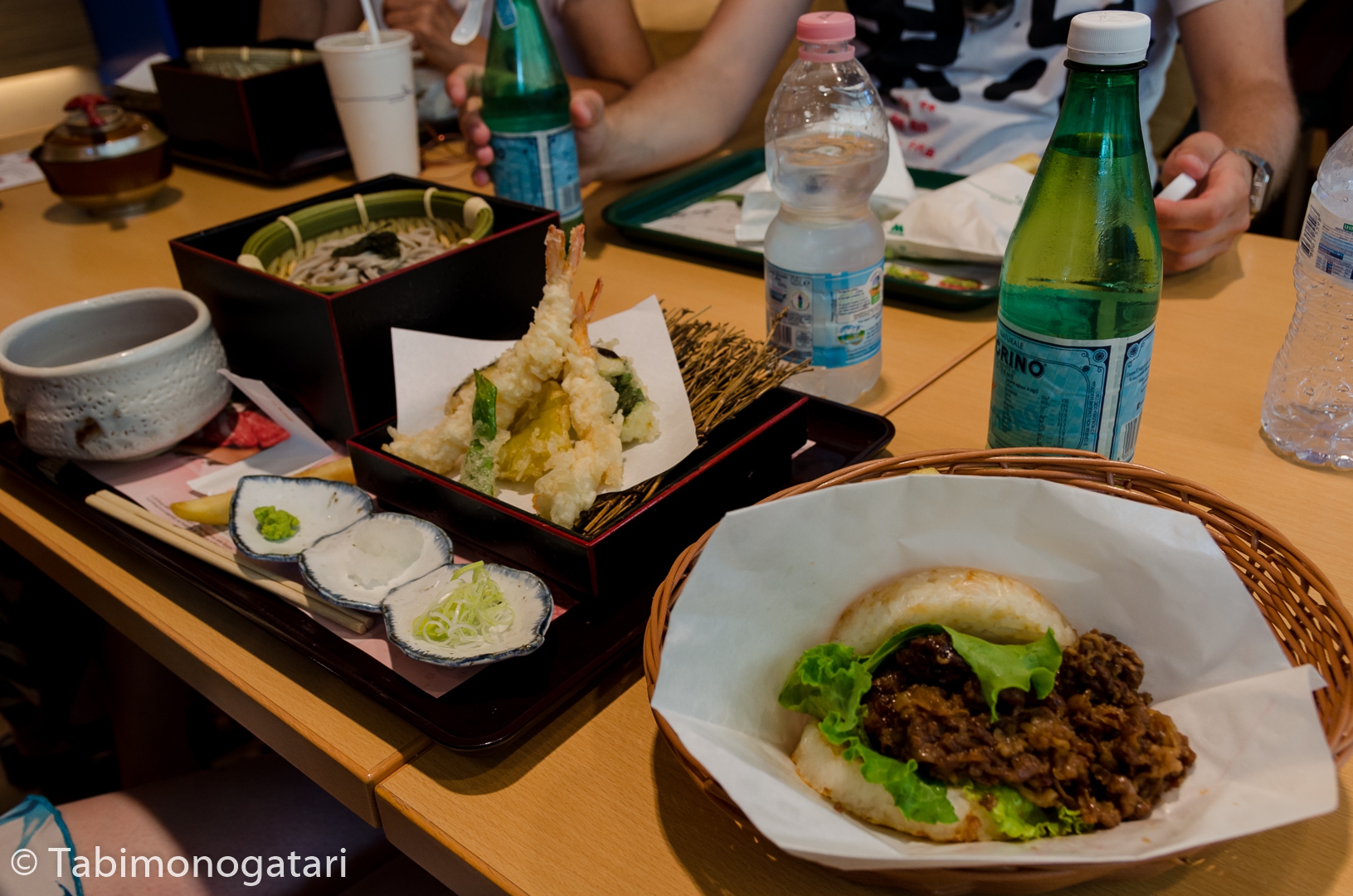 As we took longer that we initially hoped, we were only able to see the end of the parade. Ten Japanese festivals were brought here for this day under the theme of „Revitalizing Tohoku“. 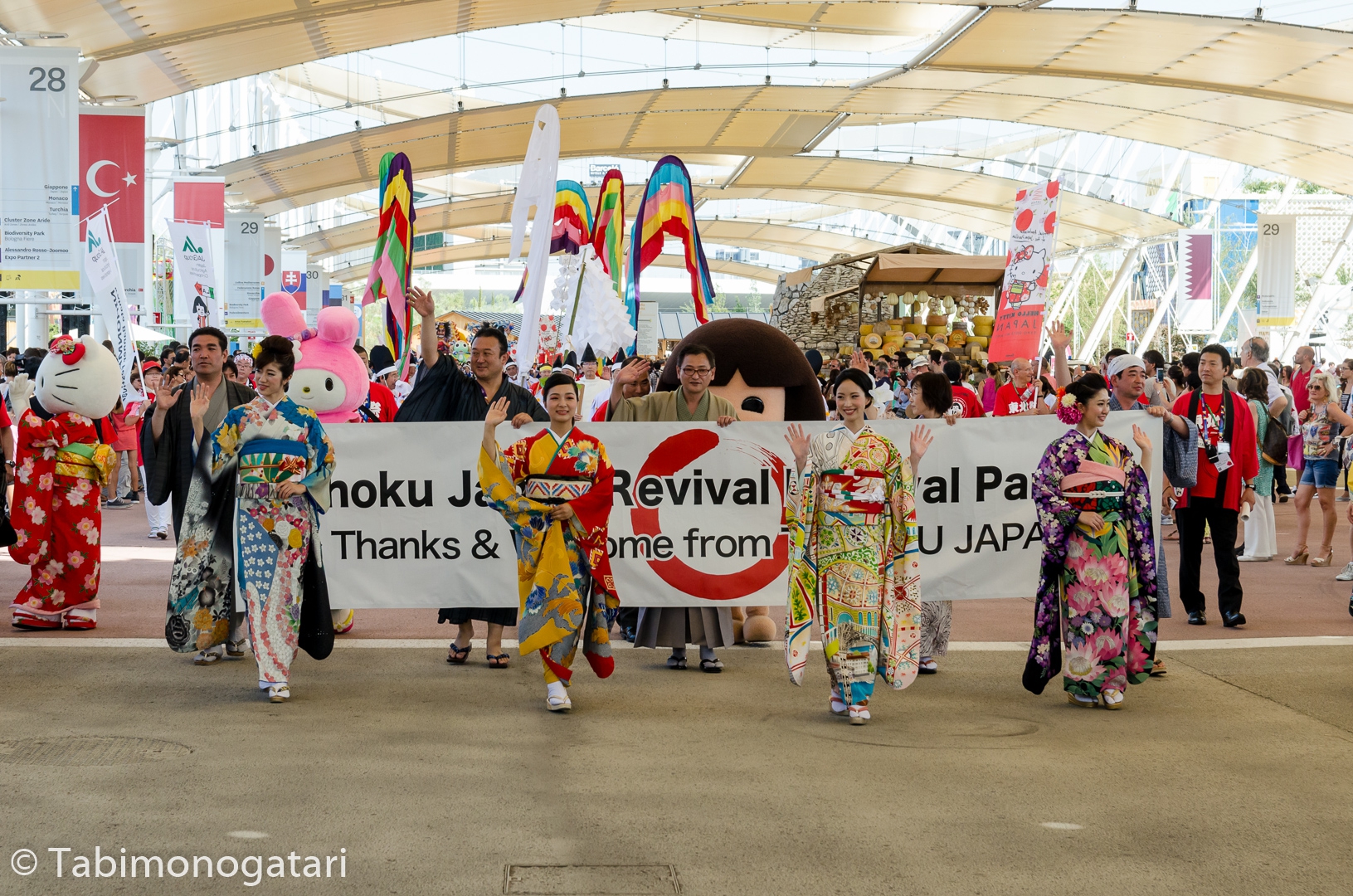 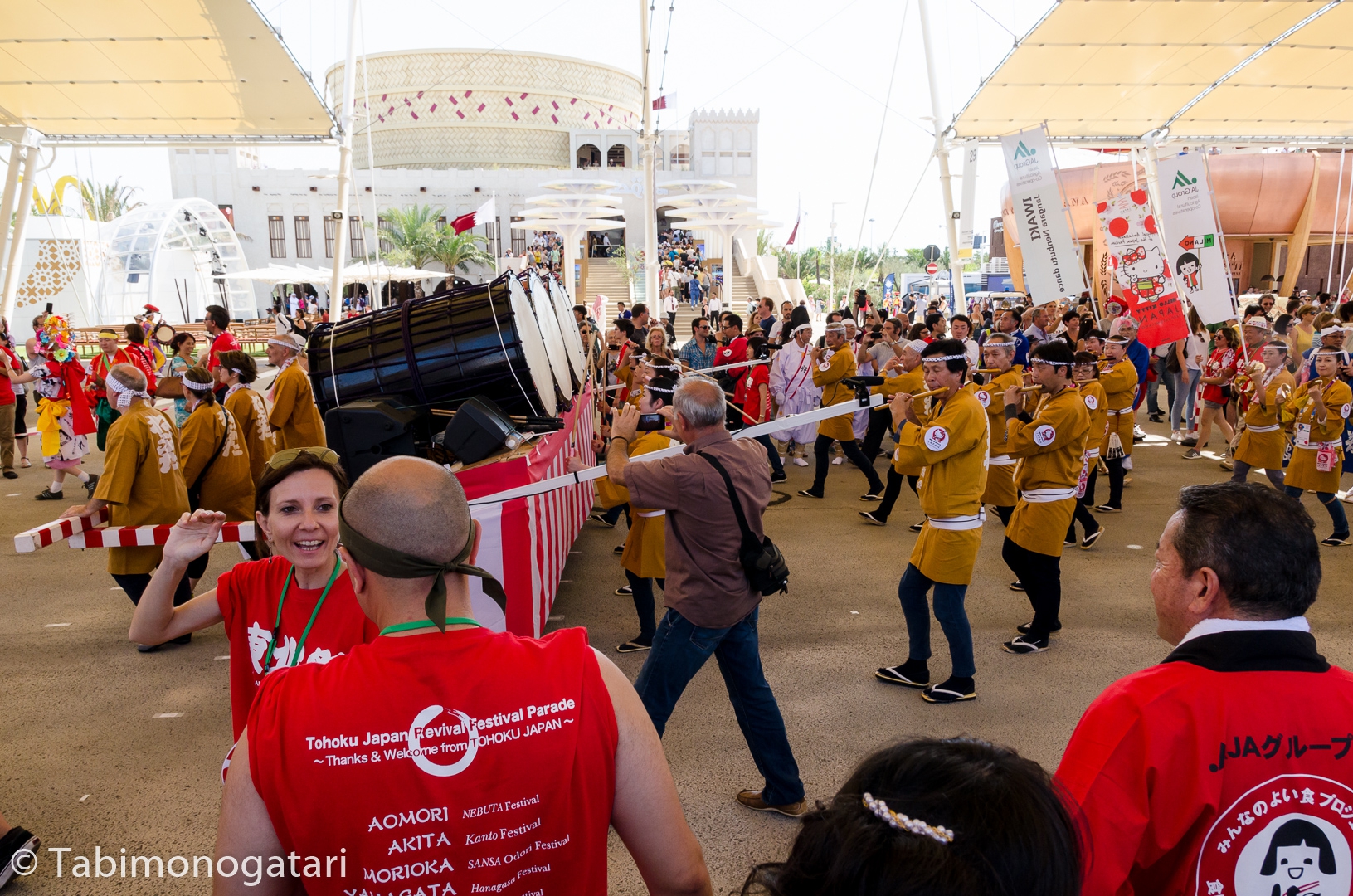 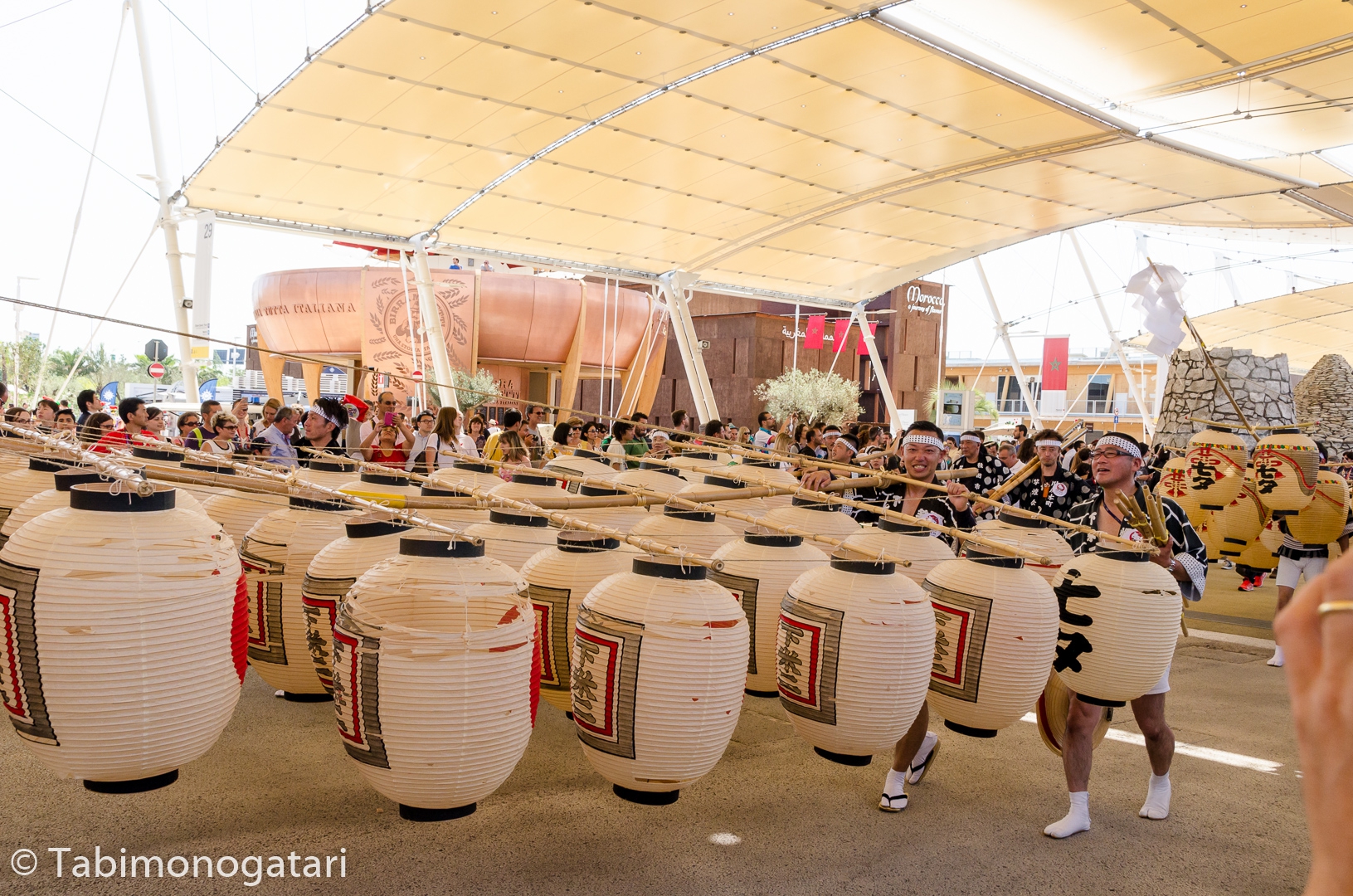 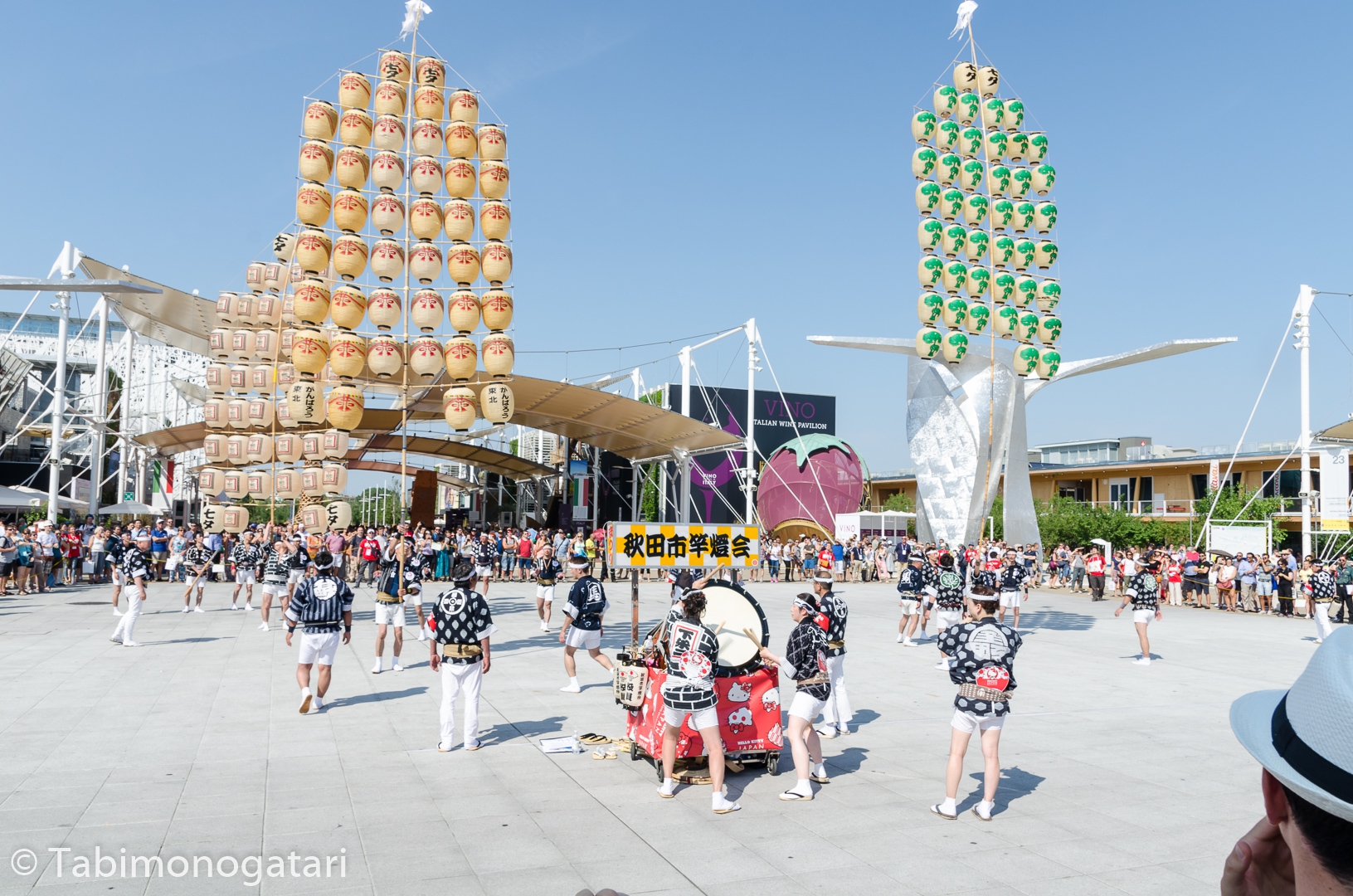 Actually there was one more event that caught our attention. There was a live event scheduled in the evening featuring Japanese traditional music artists (Taiko drums, Shamisen) and the infamous singer Kyary Pamyu Pamyu (here is a video of one of her songs). I attended latter’s concert in Paris in 2013. Though we arrived one hour earlier, the queue was quite long again. Shortly after, staff notified the waiting crowd that it would be unlikely that everyone would fit in the concert hall. That was not enough to shatter our hopes so we continued waiting. In the end the line was cut at about thirty people before us. This time we were really unlucky.

When we headed back on the main street we saw many participants of the finished parade and so had the chance to take some photos and exchange a few words. Everyone was happy when we approached them and greeted them in Japanese. 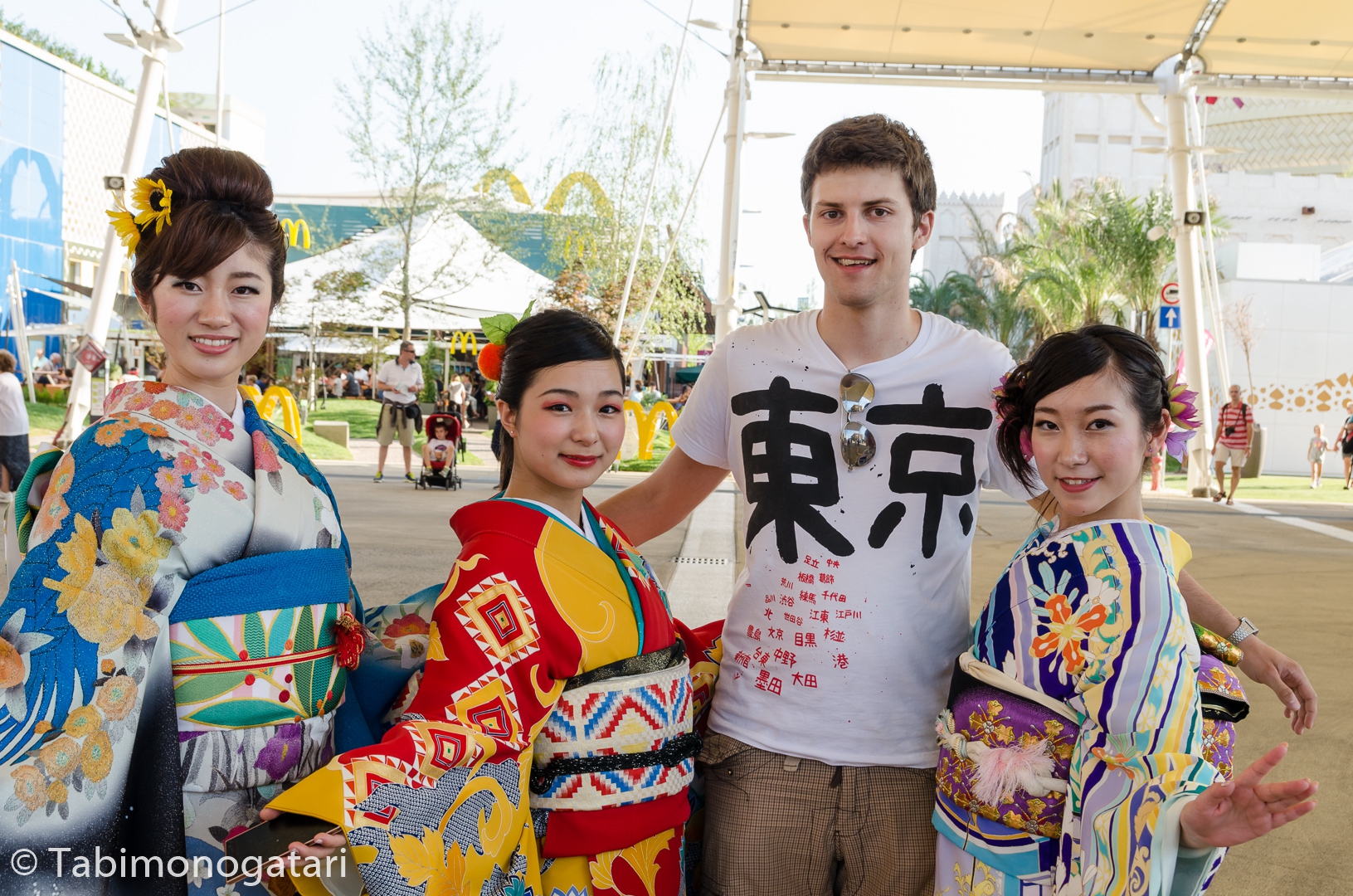 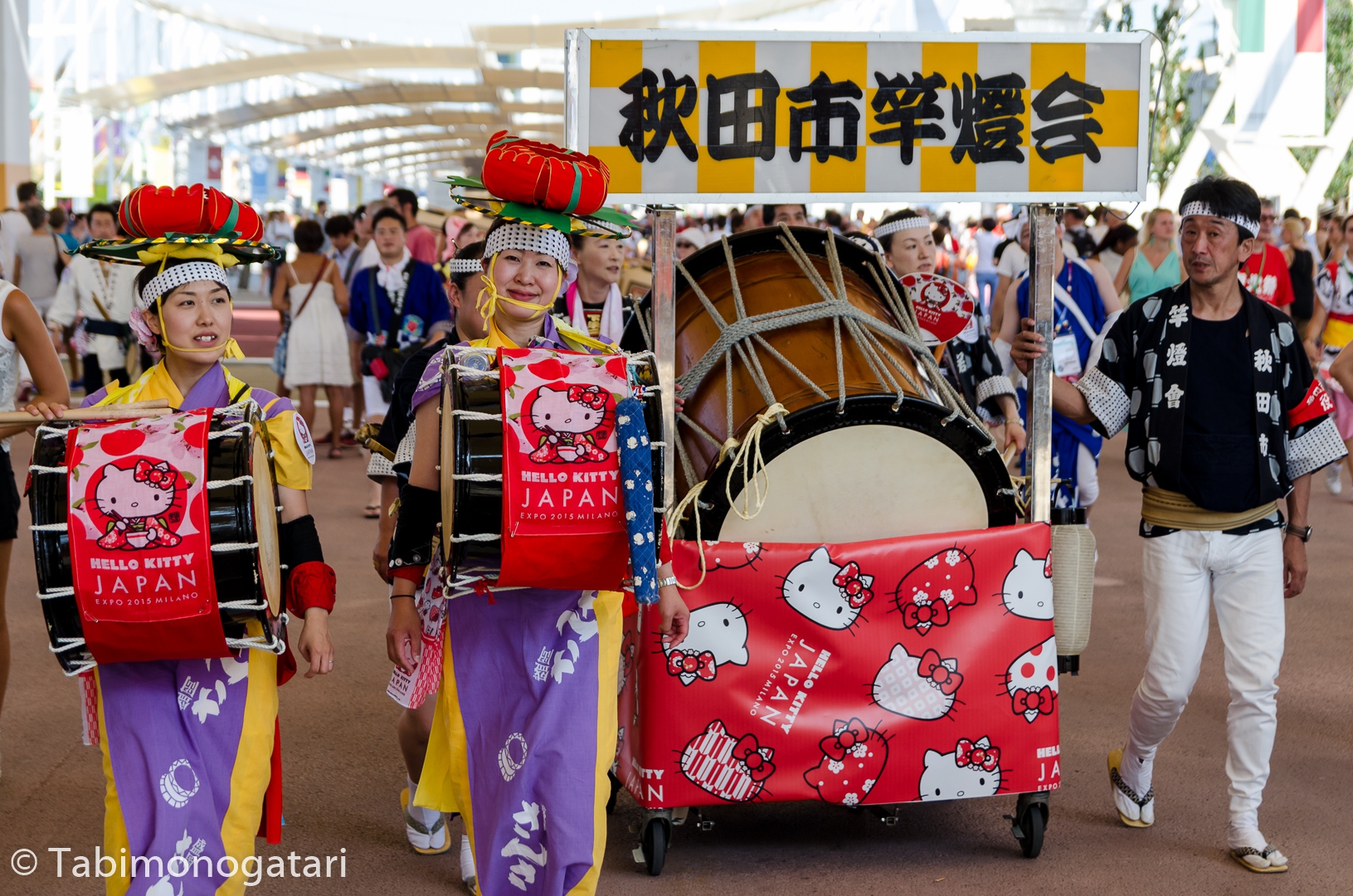 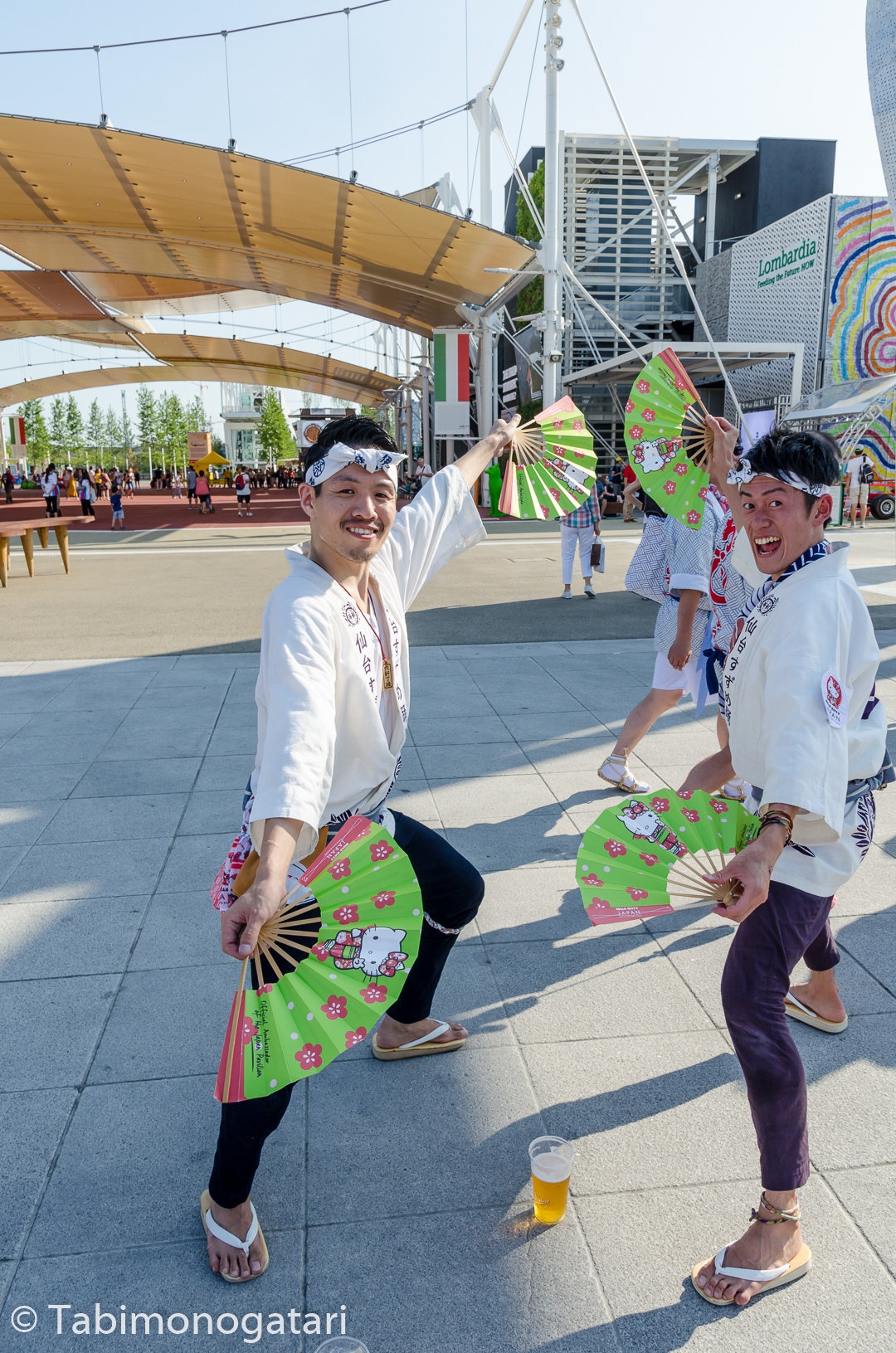 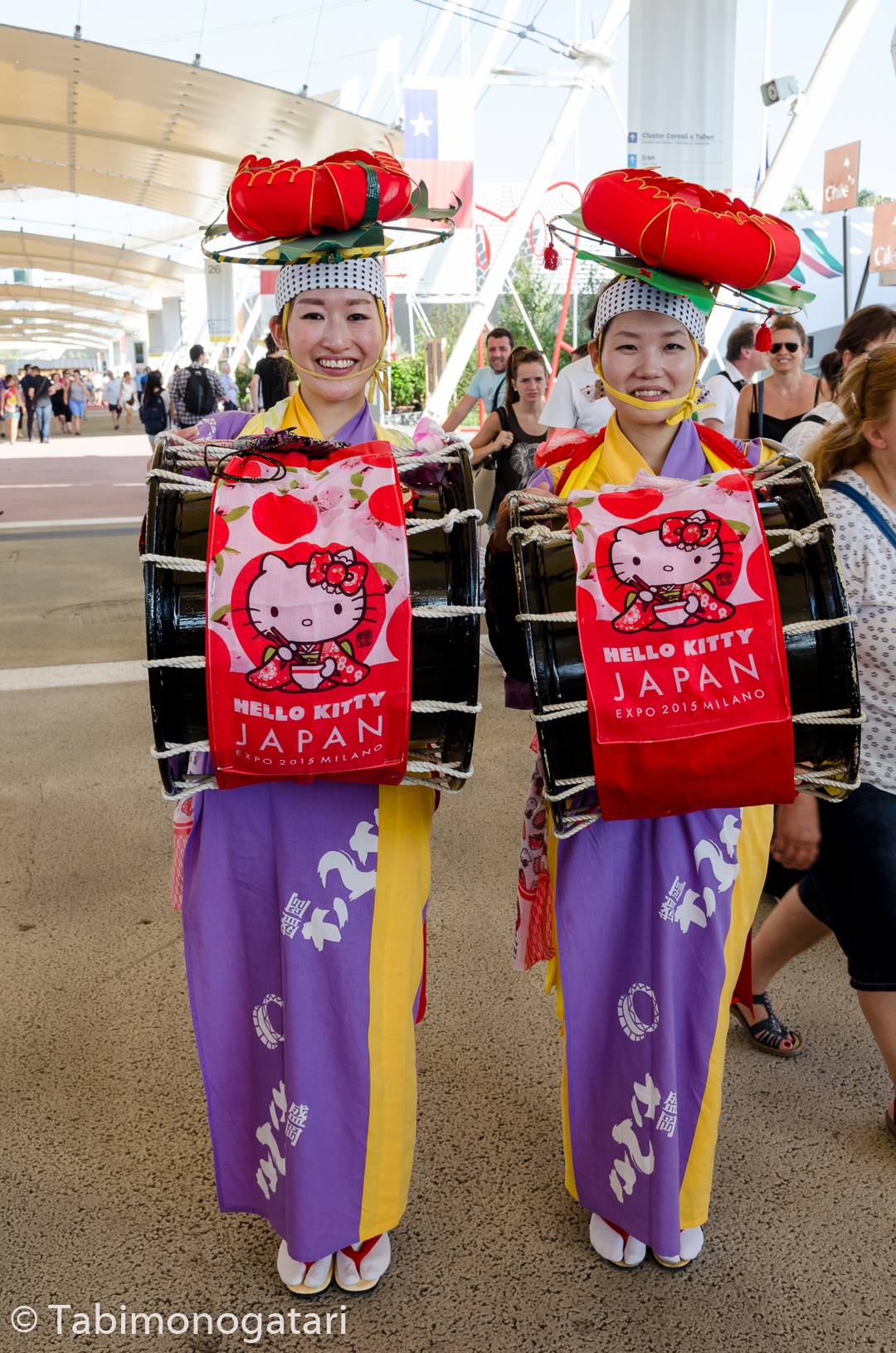 We left for the station at about eight and returned to Zurich at midnight. In the end of the day we were really sleepy from the long day. 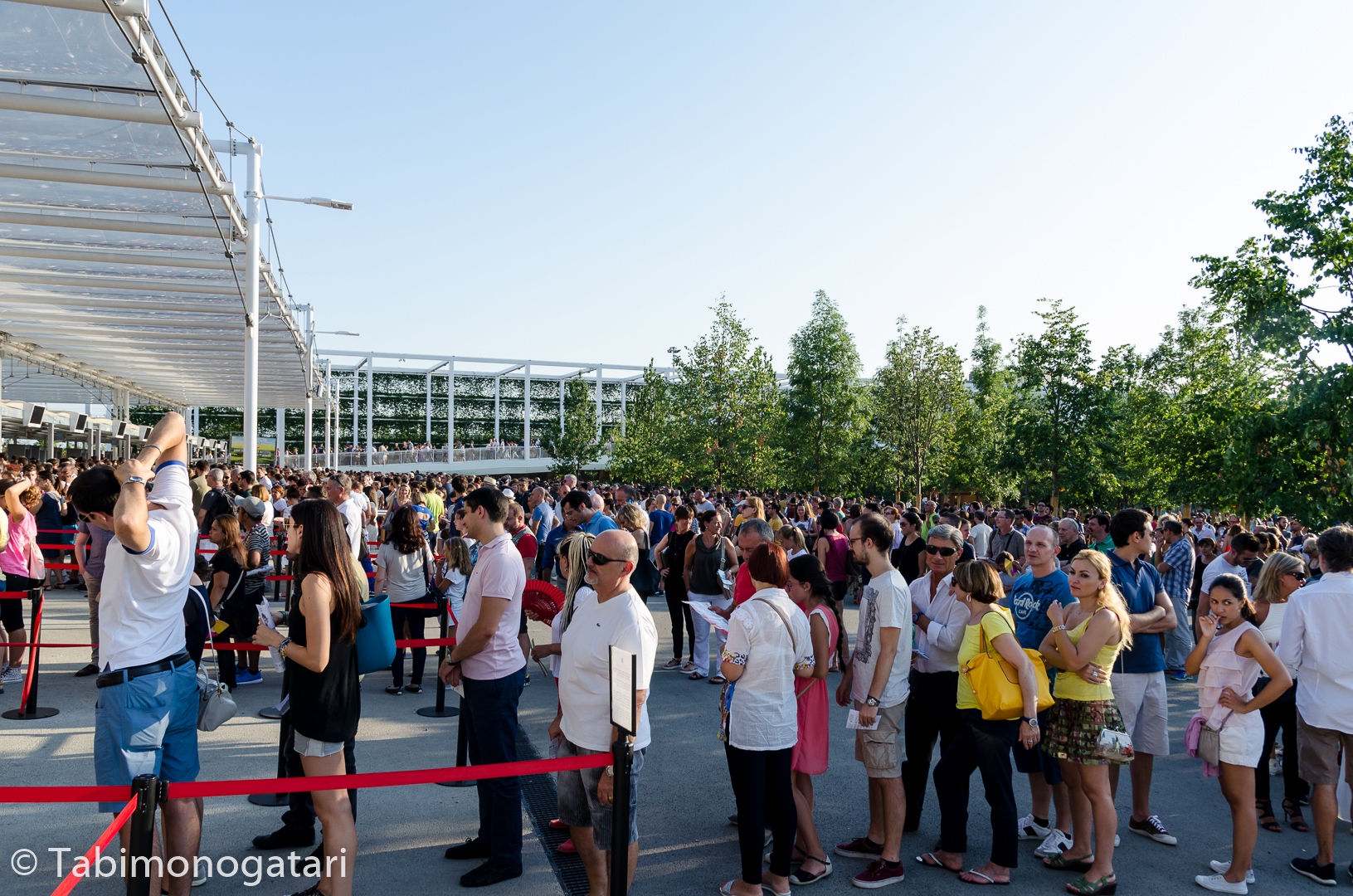 The day was extremely fun and I can recommend it to everyone. Still, the time was too short to see many things, so I might come back after my exams for multiple days.

More photos can be found in the corresponding gallery.