Finally Sunday, I thought. After my first week of full-time work I longed for the weekend. On this day I find time to write, go shopping and can enjoy various activities. This day an event I wanted to attend took place in San Francisco, so I took the Caltrain up to the metropolis.

The shopping mall in the midst of Japan Town which currently celebrates its 110’s anniversary hosted a Sumo event this weekend. In fact, they organized a tournament with four pro rikishi from different nations. 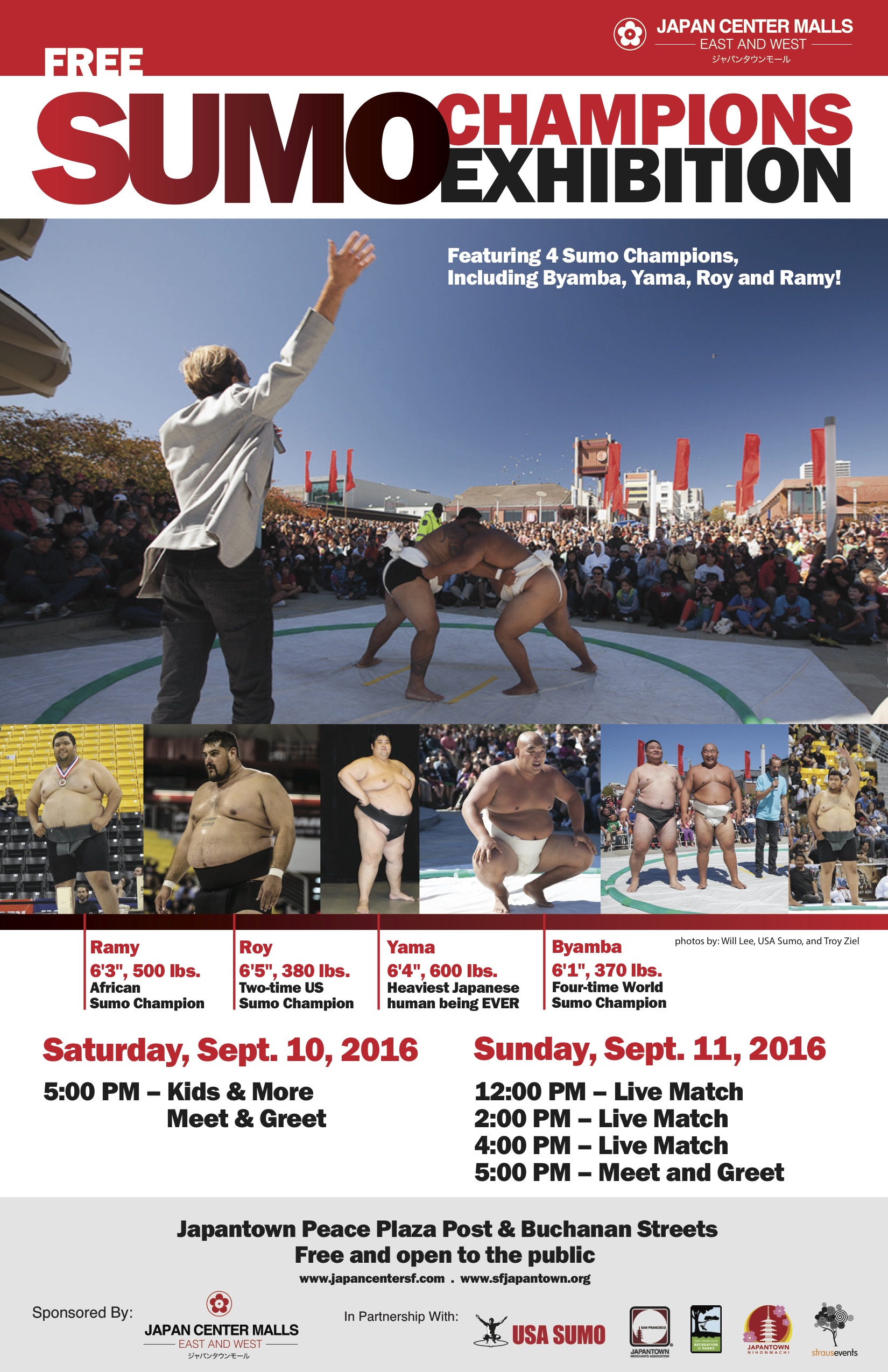 As the instructor and referee tells the crowd Sumo competitions outside of Japan are rare and ticketed so today would be a great exception.

Before the Sumo wrestlers entered the stage, a local Taiko band played two songs. Having tried out Taiko recently I understand better now how much concentration and rhythm feeling you must possess to play such a long and complicated song in unison. 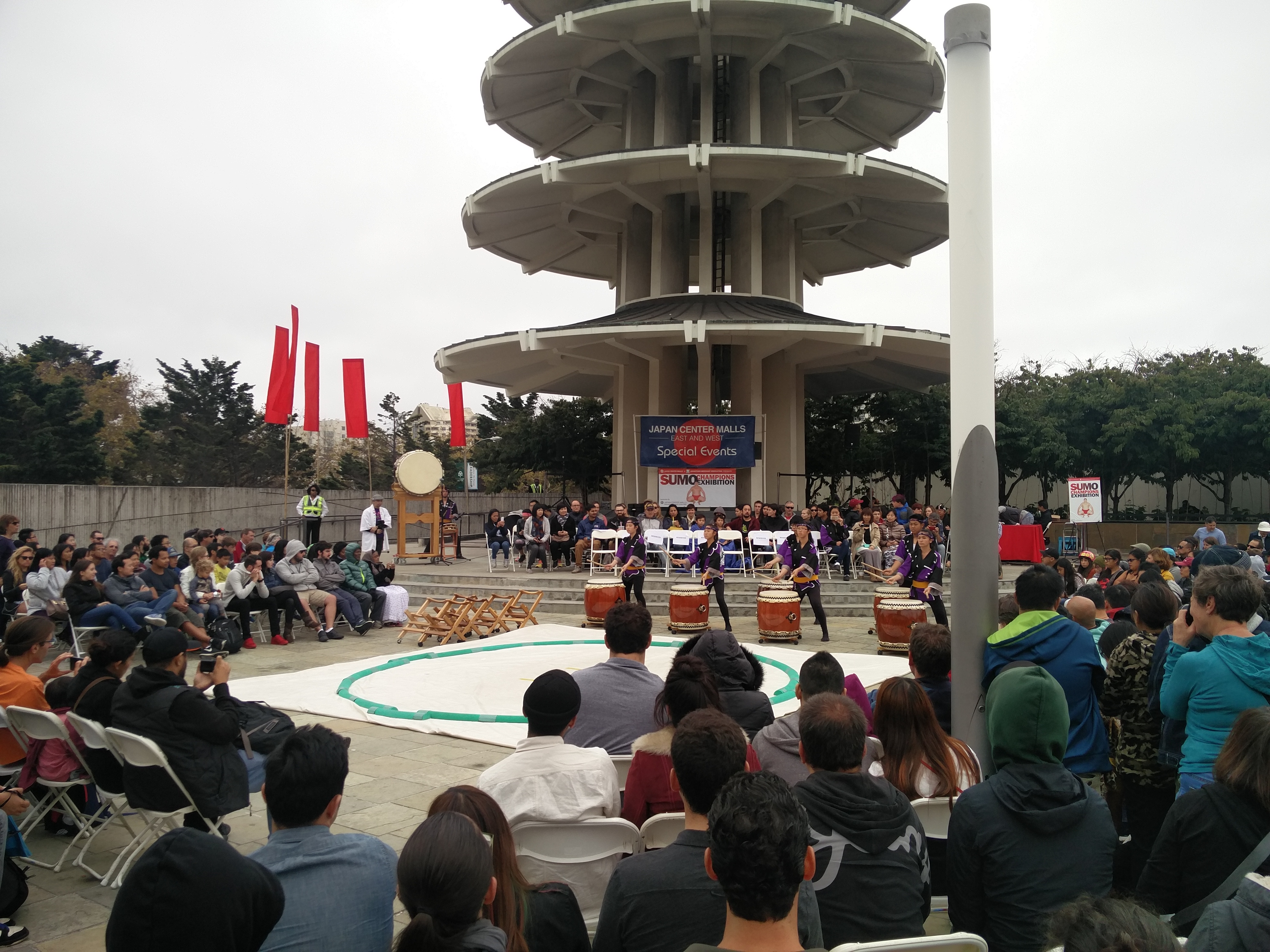 Then, the referee showed to us who would be with us today. A very young Japanese, a Mongolian, an American and another Japanese rikishi, who were all top of their respective leagues in national competitions, were welcomed with applause. 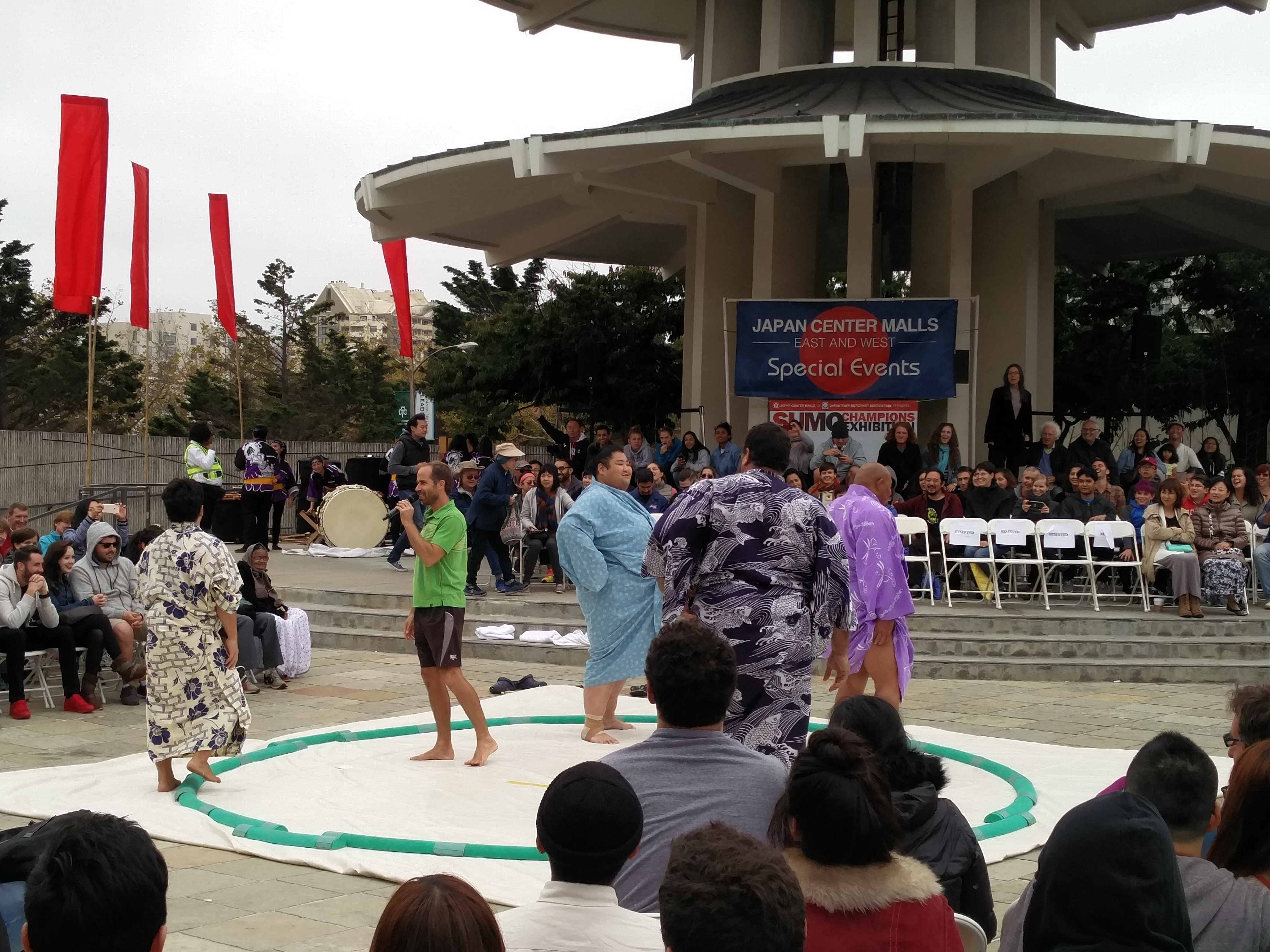 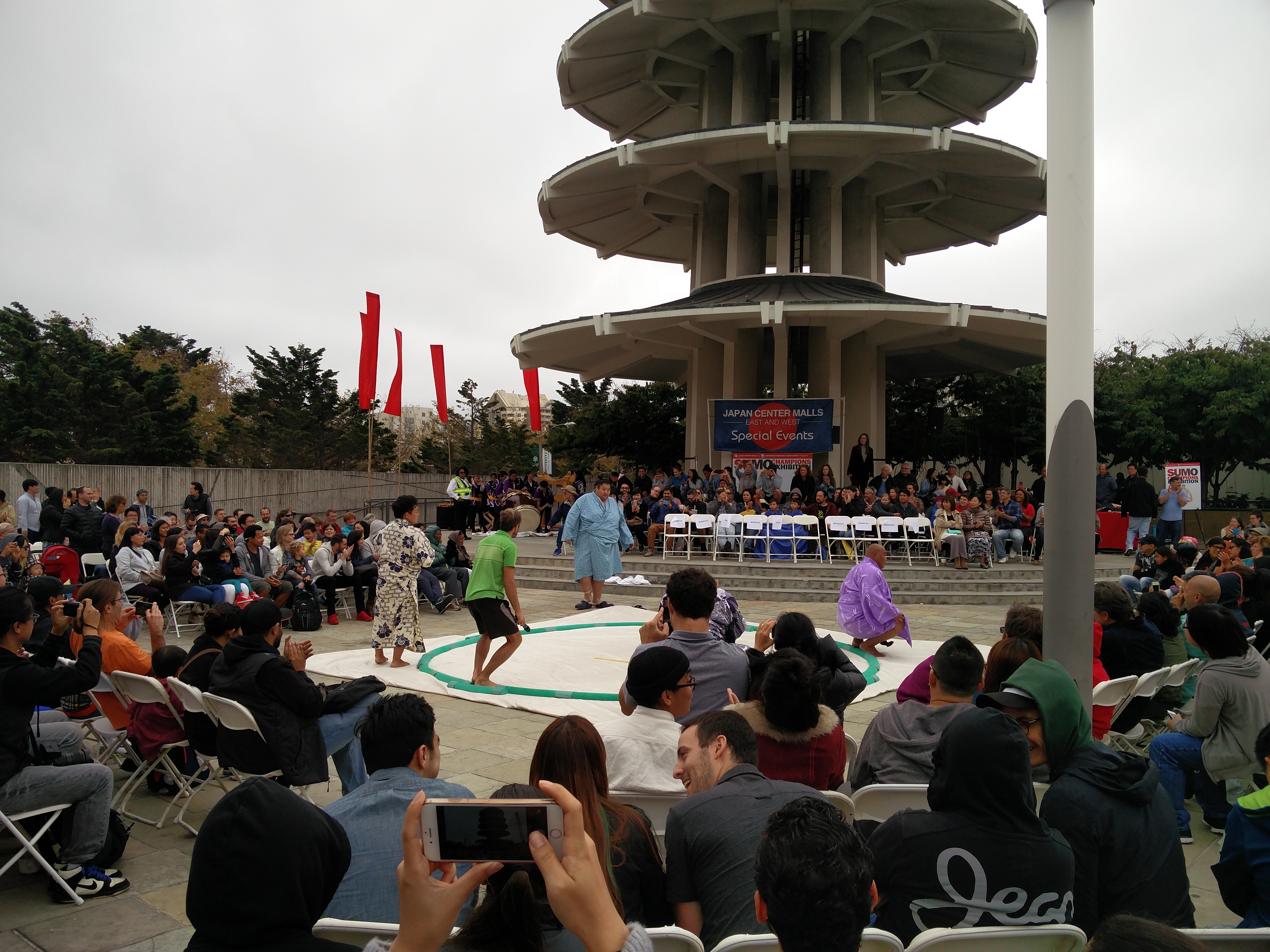 Both Japanese men were extremes – the young one just finished university and is rather light with 200 pounds, the other is the heaviest Japanese person alive with 600 pounds! 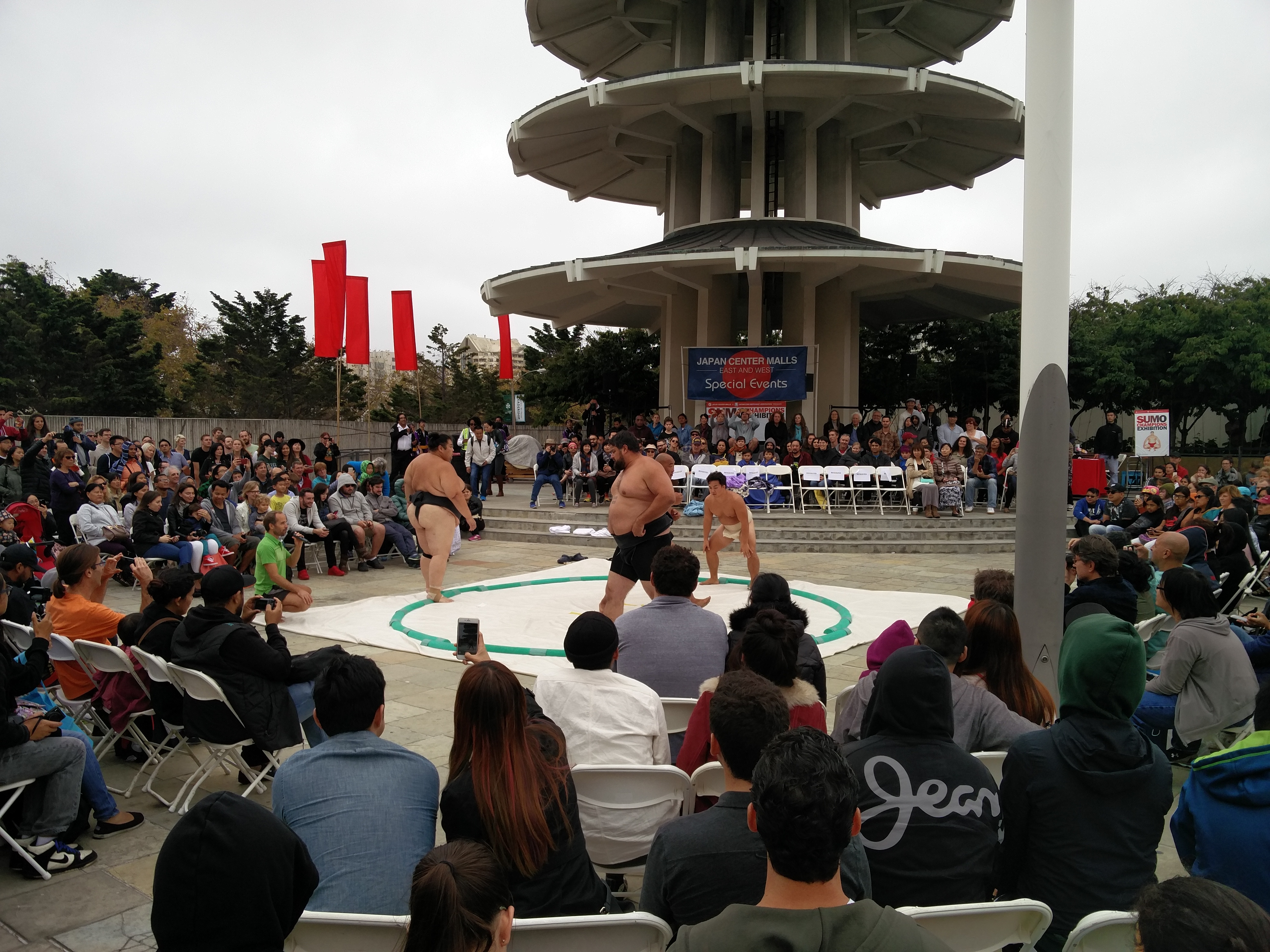 All four engaged in matches against each other and the Mongolian rikishi managed to secure the most wins. What I found particularly noteworthy was the strength the youngest and lightest man brought up against the heaviest one. He lost in the end but had the upper hand midway through.

Between every two matches the audience could ask a few questions, like what the sumo wrestlers eat, how their daily routine looks like and how they can fly in a plane.

After the show I strolled through the corridors of Japan Mall, tried to avoid all the delicious looking food and stopped by at Daiso, an one dollar shop from Japan. 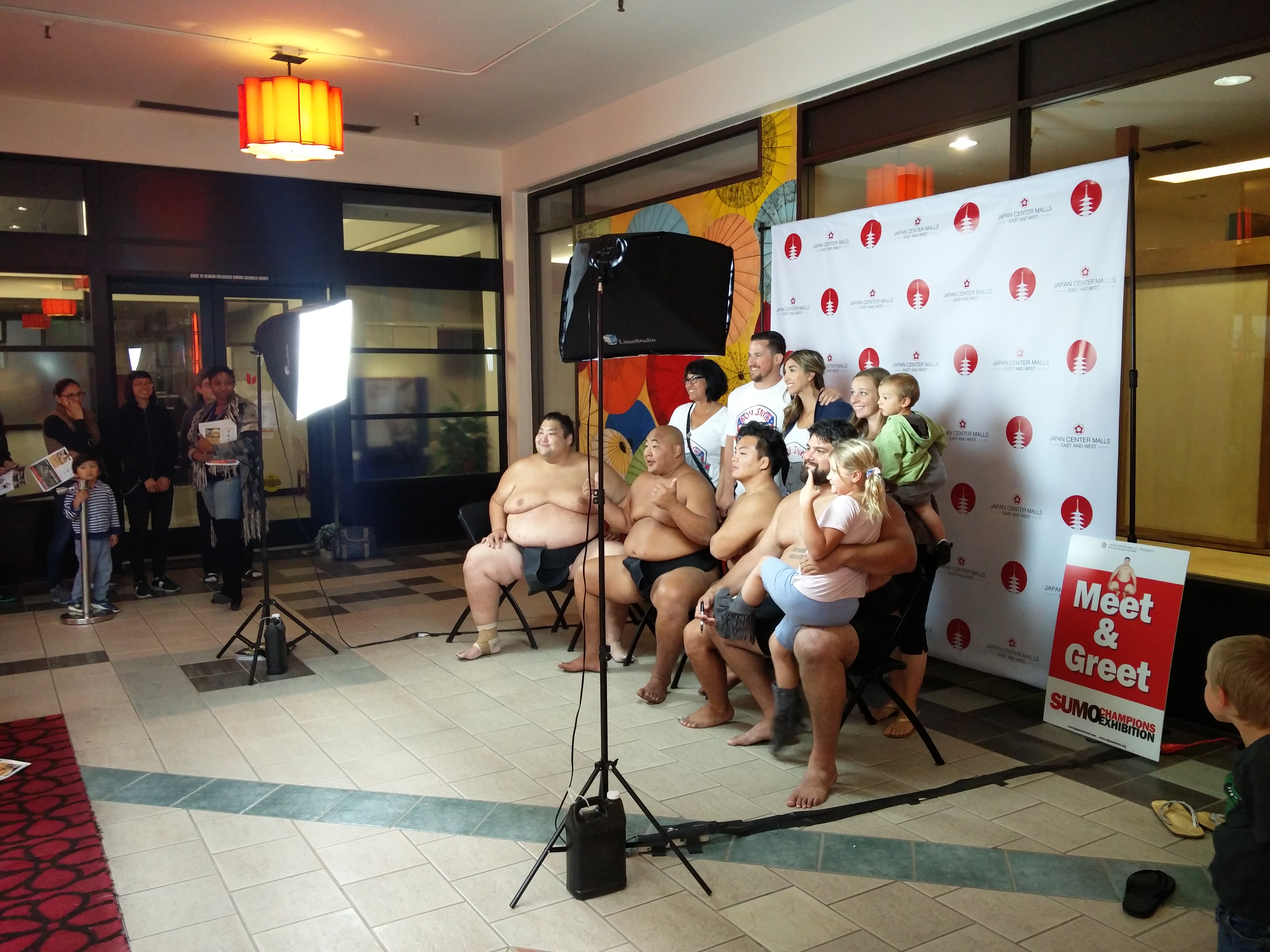 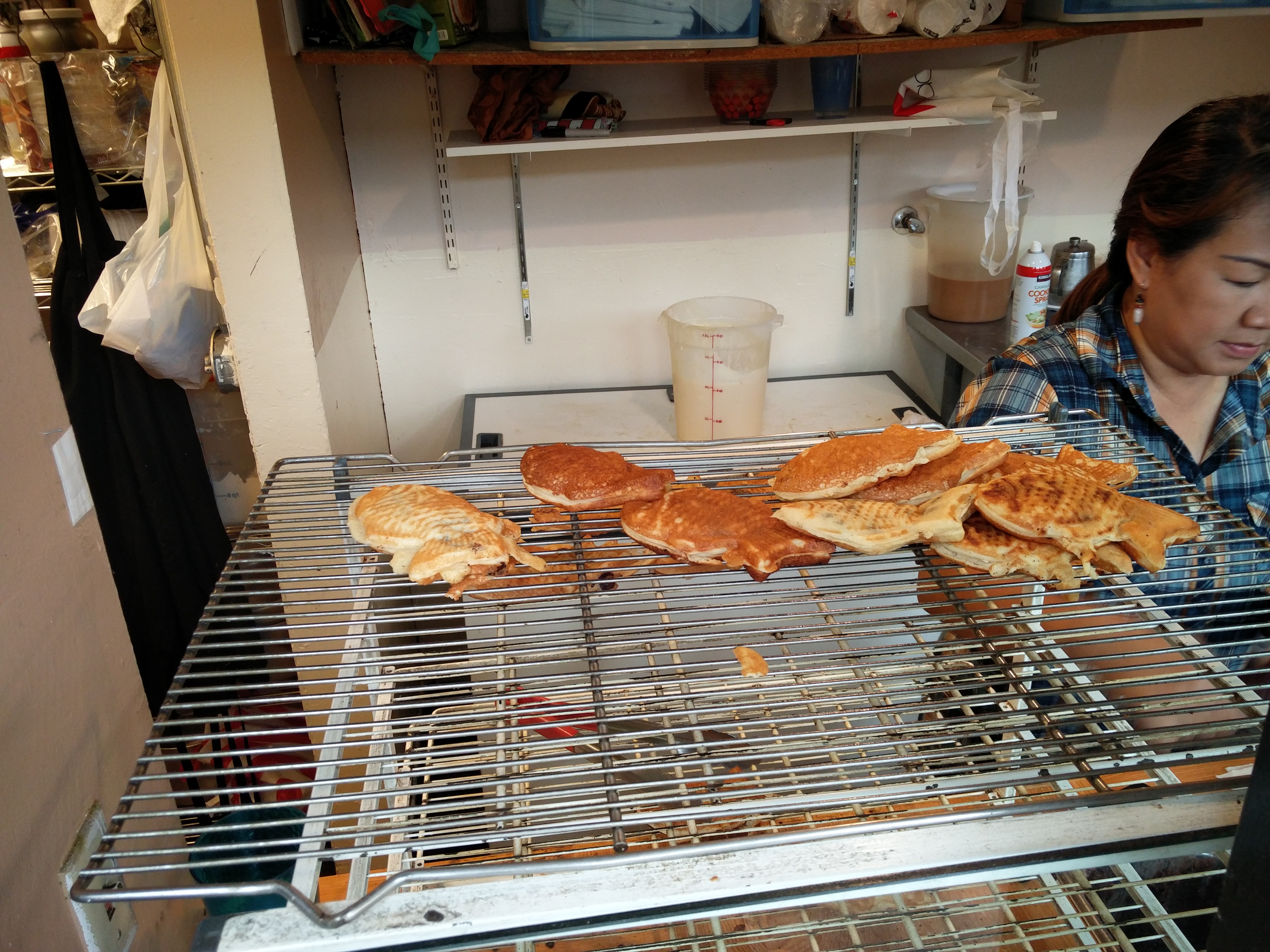 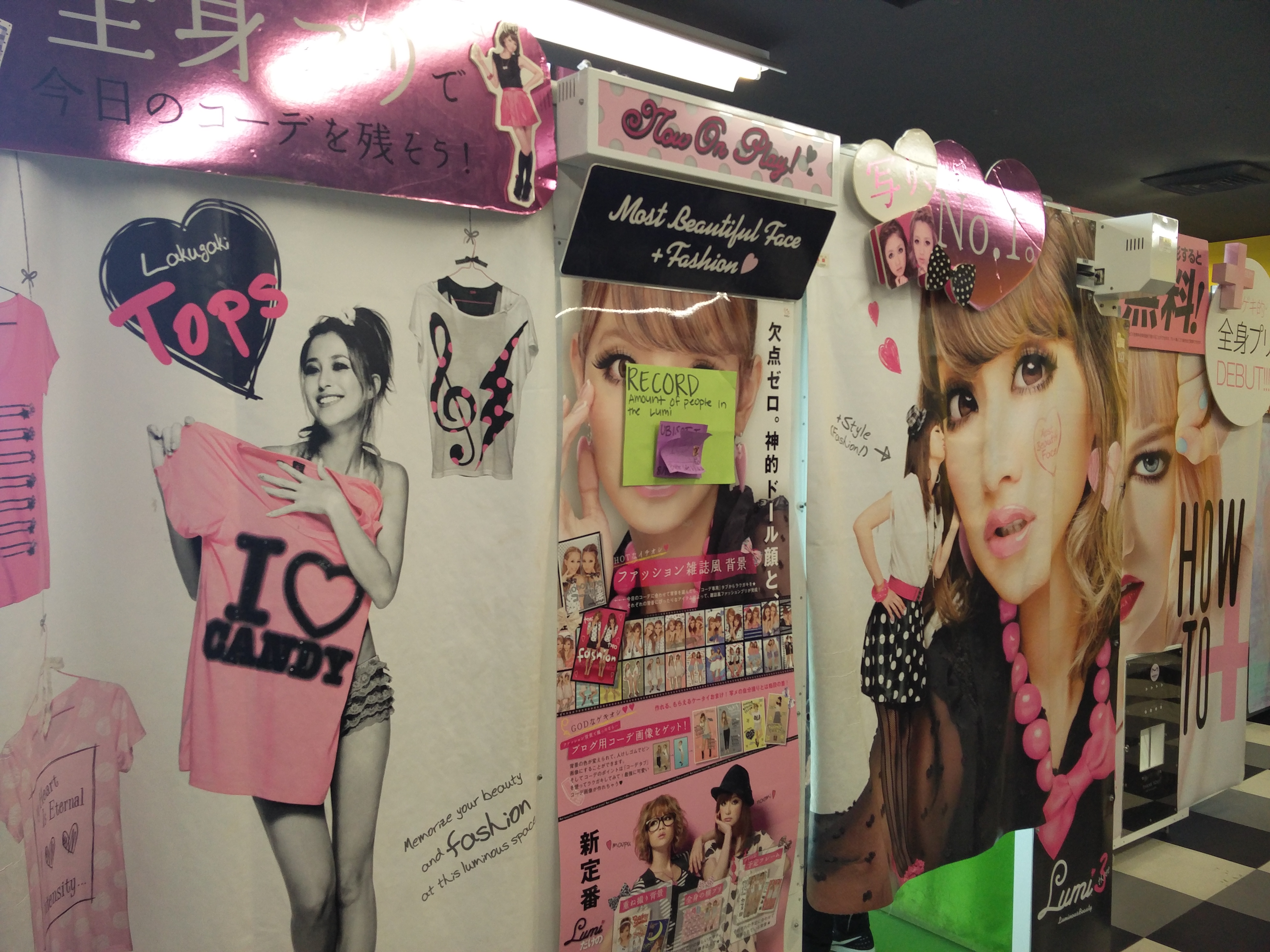 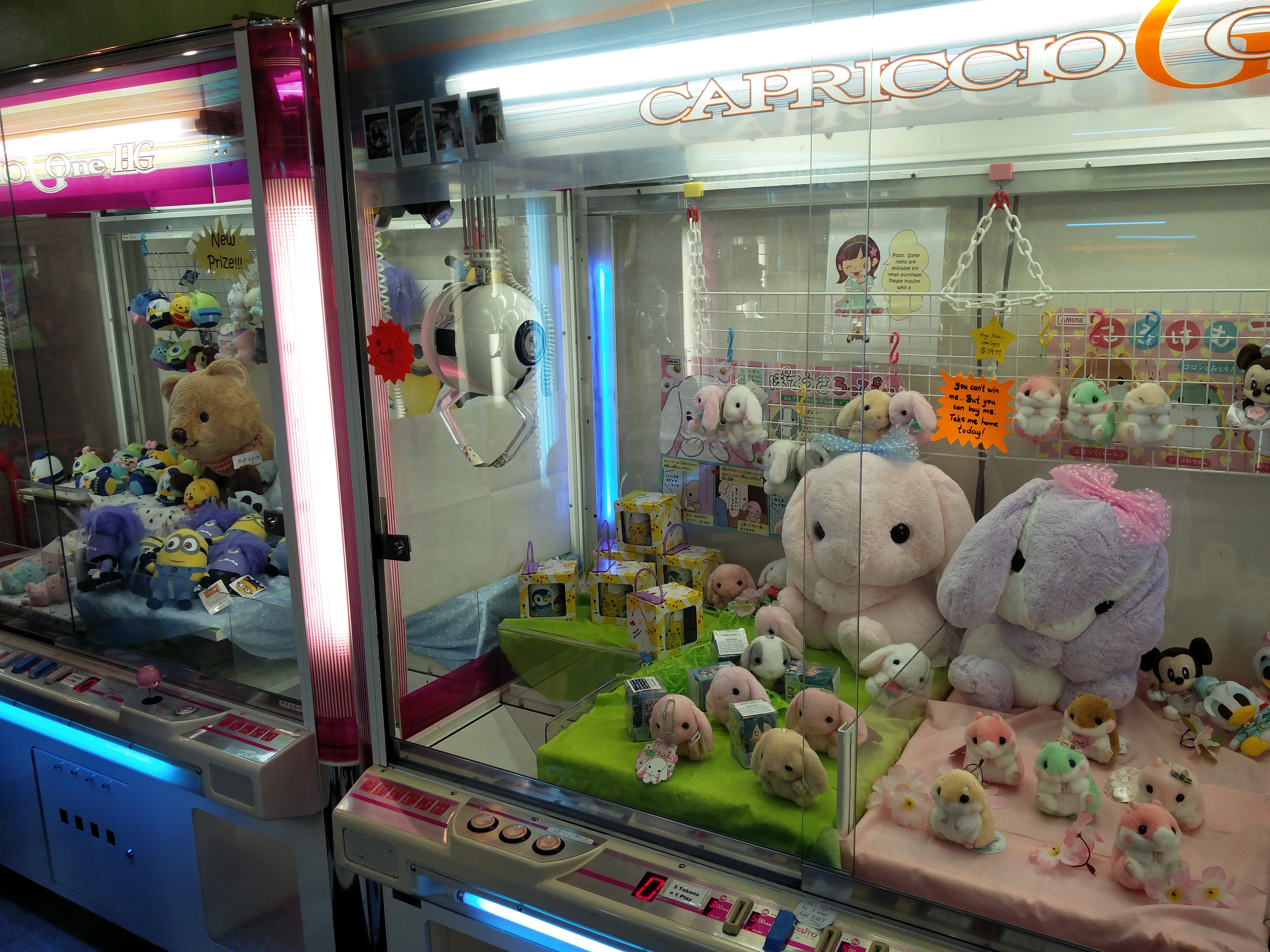 Next I took the bus to Union Square and went shopping at Uniqlo. Summer is transitioning into autumn and the nights get pretty chilly, more than I expected in the beginning. That is why I bought a new parka and a hoody for the cooler days.

The palette of cuisines offered in San Francisco is so rich that you could try something new every week. Still, I decided to eat something very familiar. This time I tried out ramen again at a new place.

In front of Mensho Tokyo a queue of about 30 people had already formed when I arrived. When a staff called for a single guest I found myself the only one in the queue and therefore was lucky to skip the whole queue moments later!

Inside the restaurant a modern and stylish interior awaited me. On the walls there were multiple passages about the principles of Ramen, the meaning and origin of umami and the molecules responsible for forming it. Also the selection and origin of the supreme ingredients were explained. At long high tables people were chatting and slurping their bowls, while calls from the open kitchen welcomed new customers and responded to the incoming orders. 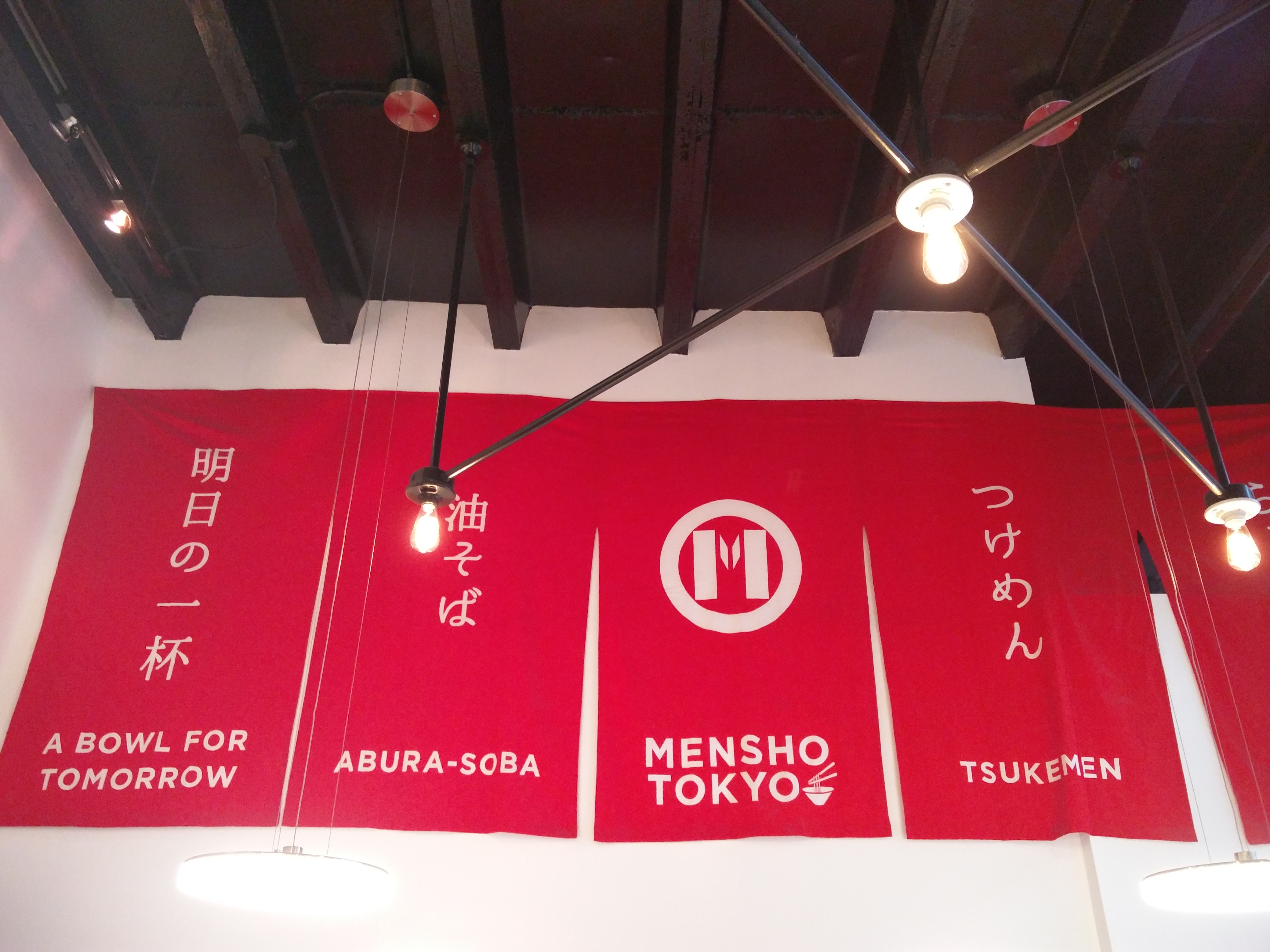 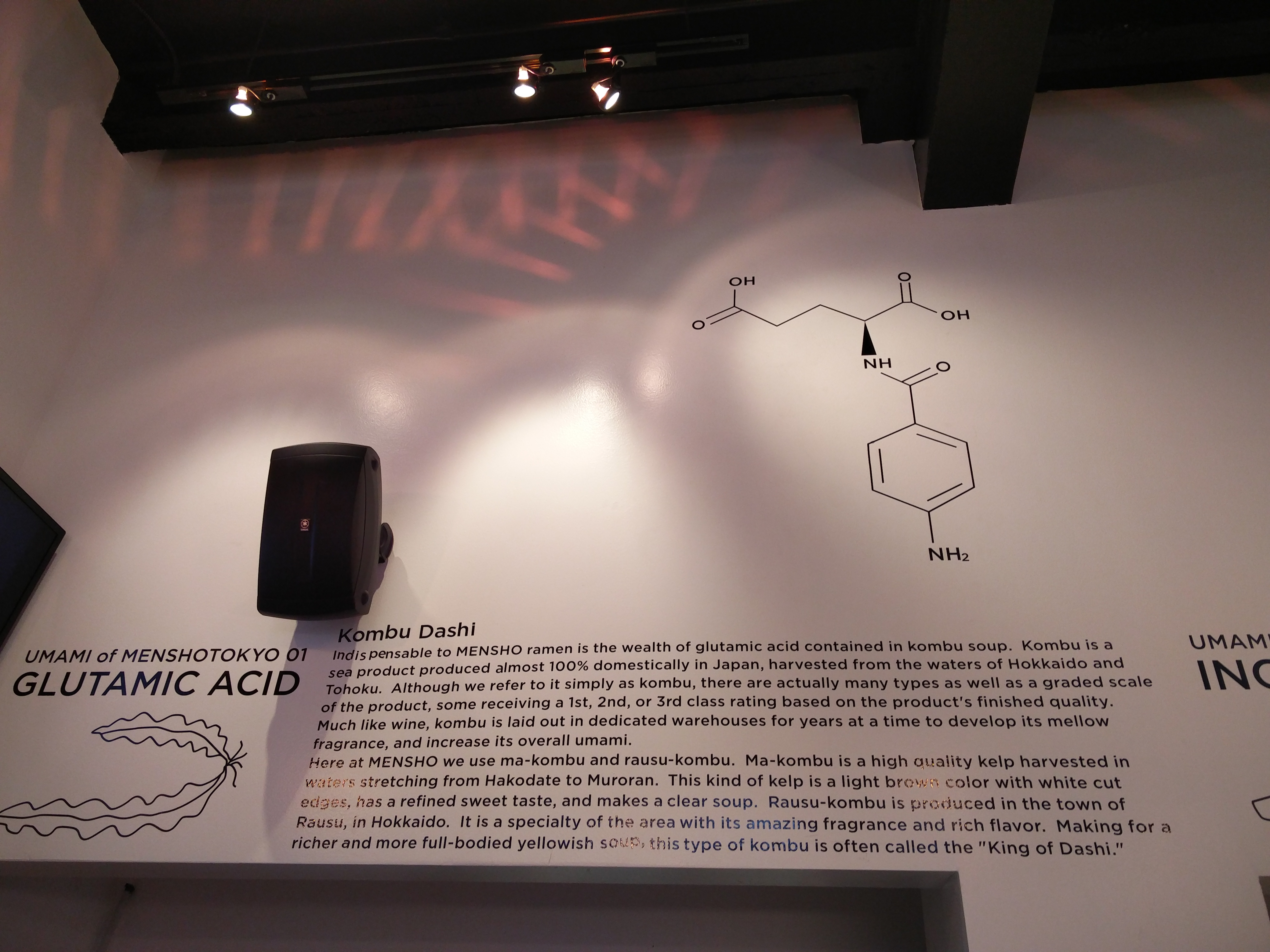 The menu offered four kind of Ramen, as well as a variation called Mazesoba which basically is Ramen without broth. Also here apart from standard Japanese beer brands a selection of craft beers and Sake from Japan could be found in the menu.

I settled for the vegan Tantanmen which was a new twist for me as it normally contains ground pork. The bowl arrived and I began by trying the broth. It was very savory, but not salty, full of umami and just a little spicy. The noodles were a little bit firm, and the added nuts, edamame and herbs complimented the dish in a good way. I think this was the best Ramen I ever had outside Japan.

After the satisfying meal I headed back to Palo Alto to end the day in a relaxed manner.