Today I woke up extra early, because I had ambitious travel plans for the day. Starting from Hiroskai in Aomori prefecture I wanted to make my way all the way down to Fukushima and then up another valley to Ginzan Onsen in Yamagata prefecture.

Ginzan Onsen is a famous hot spring resort deep in the mountains of Yamagata and while it is hard to reach, its historic Taisho-era buildings made me want to visit anyways.

Breakfast was included in my stay, so I showed up straight at 6:30 when they opened. There was a rich buffet of Japanese dishes and also some Western ones and I tried to sample as much as I could within 20 minutes. Sadly, I did not have more time, as I had to leave at 7:00 for the shuttle bus to the station. 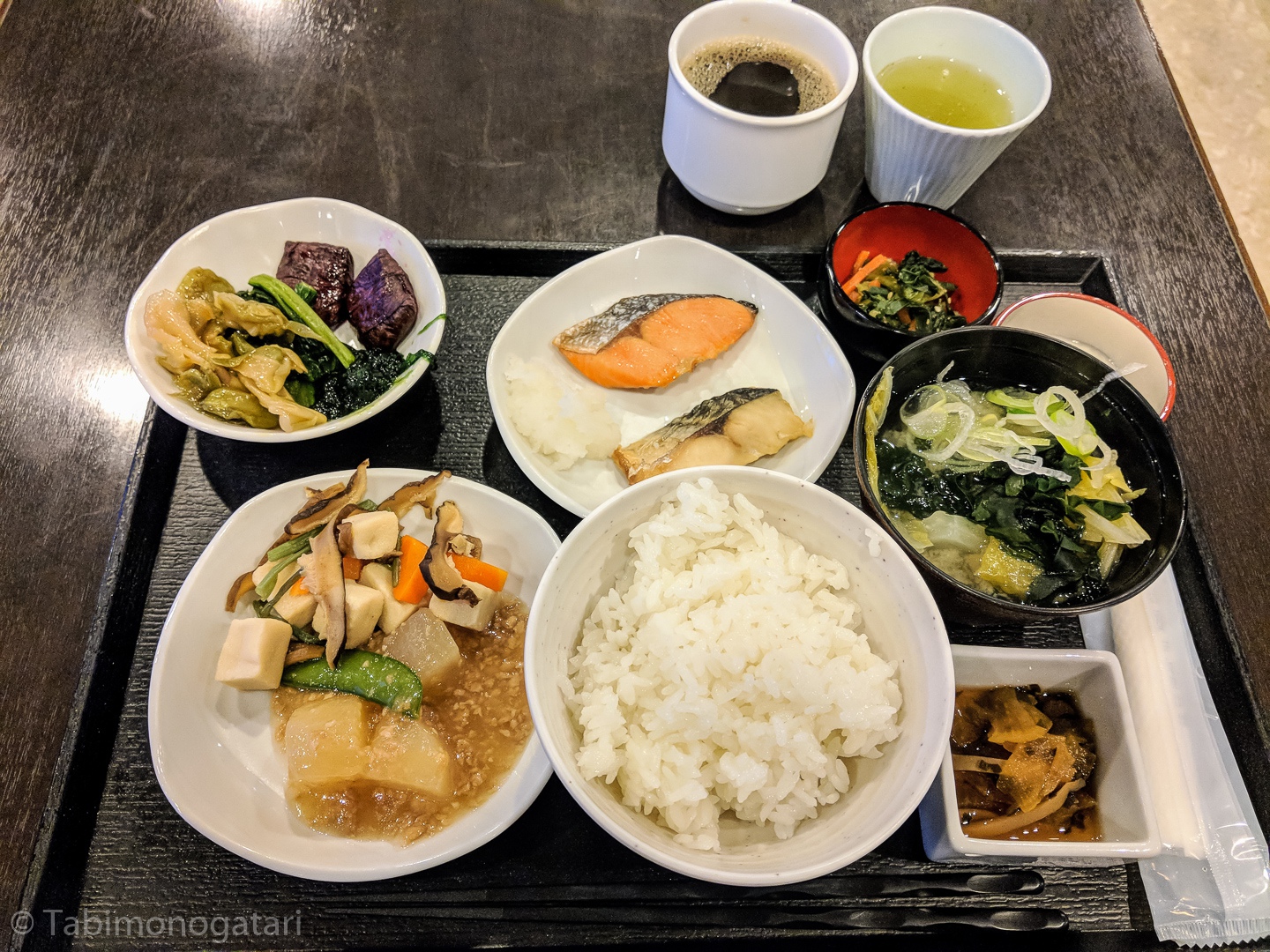 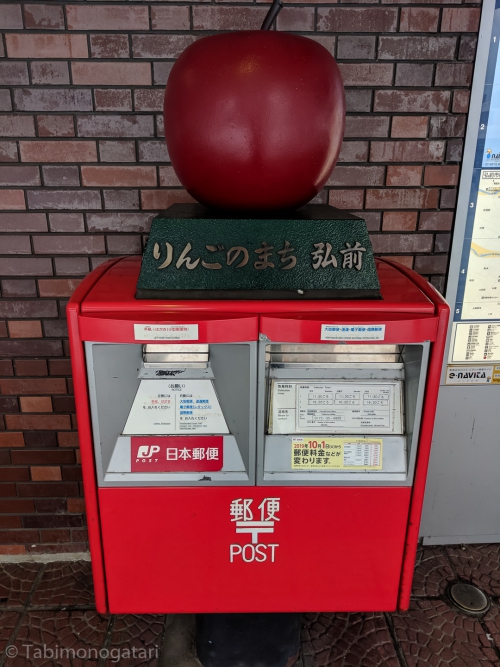 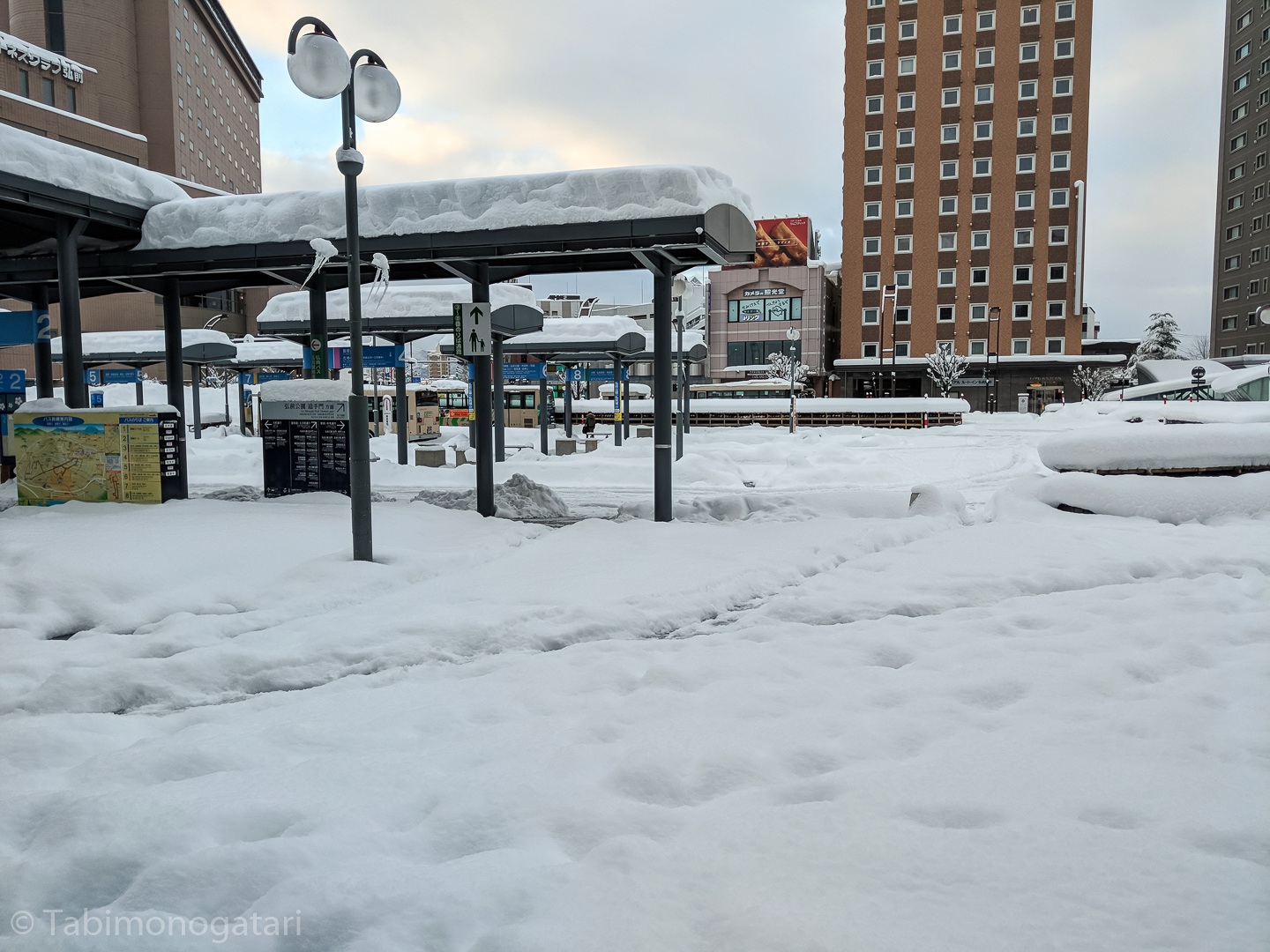 From Hirosaki the local train brought me back to Shin-Aomori, where I could board the Hayabusa Shinkansen again. With blazing speed we rushed down to Sendai where I transferred into a “slower” Shinkansen, called Yamabiko to reach Fukushima station. In Sendai we returned to “no snow” but it was still chilly. 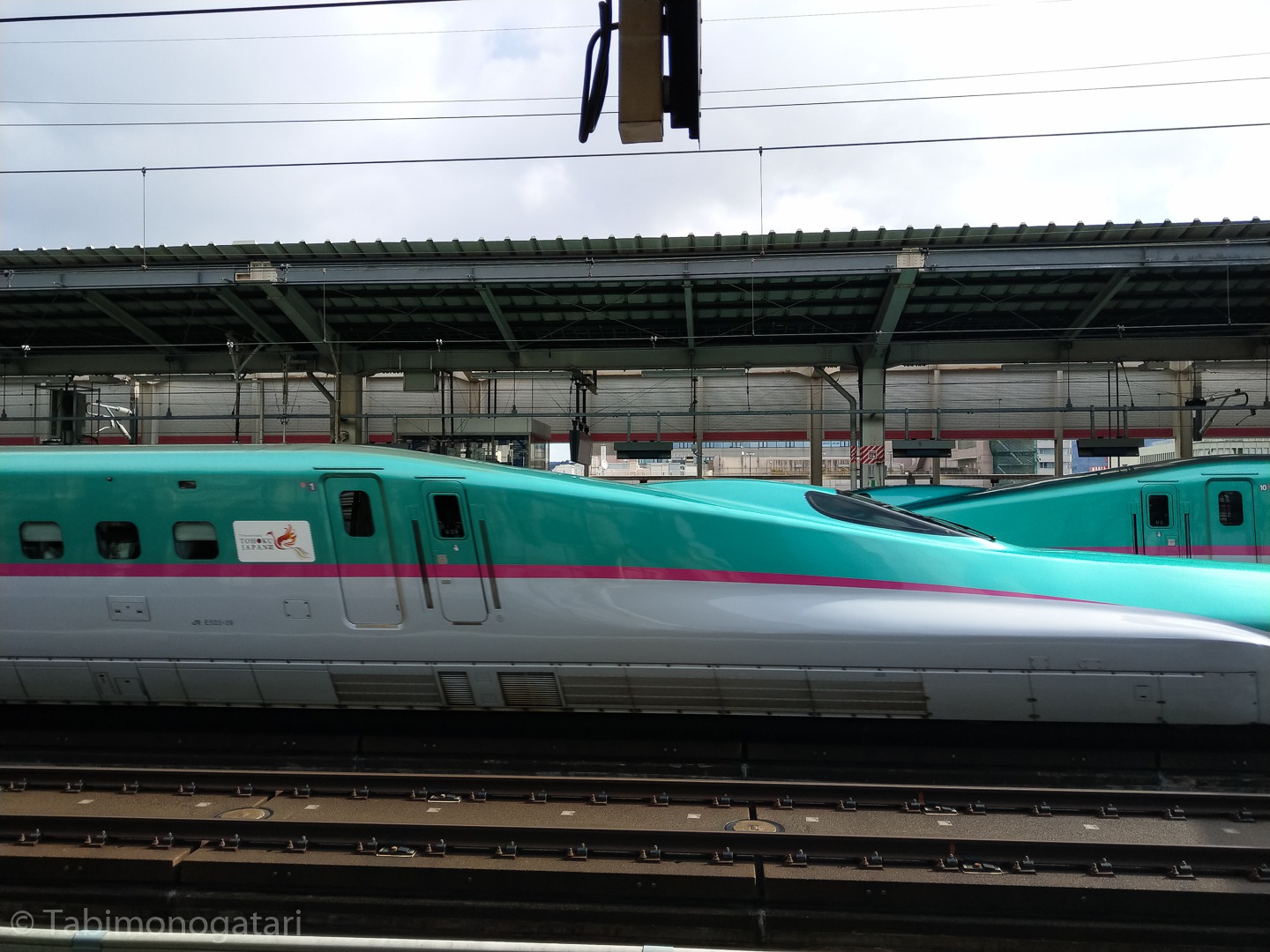 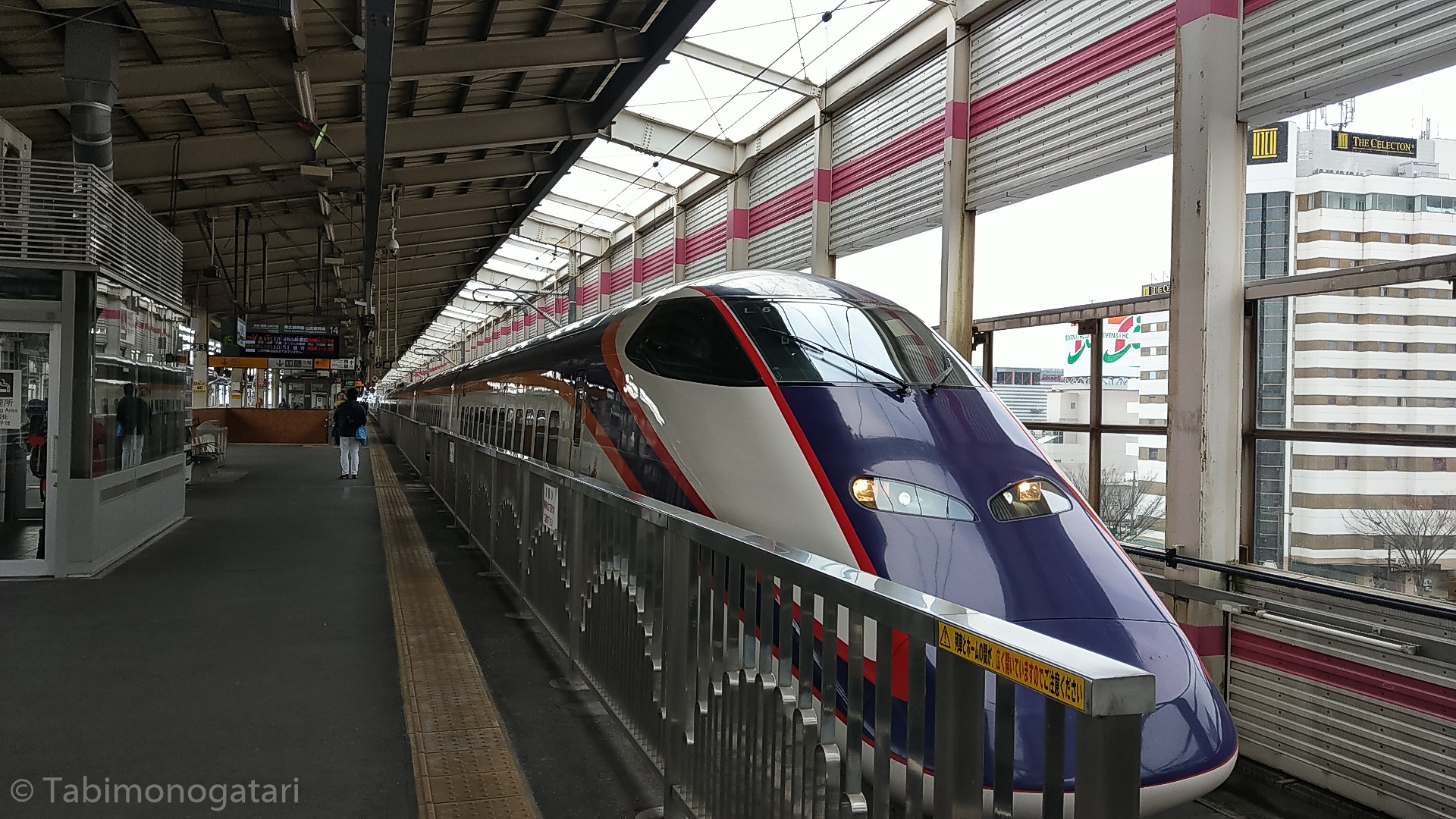 In Fukushima I transferred to yet another Shinkansen, the Tsubasa bound for Yamagata. This train is a bit different from the other lines as it is a bit narrower and operates on the conventional rail network. On this train I made my way into the center of Yamagata prefecture and soon it was all white again. 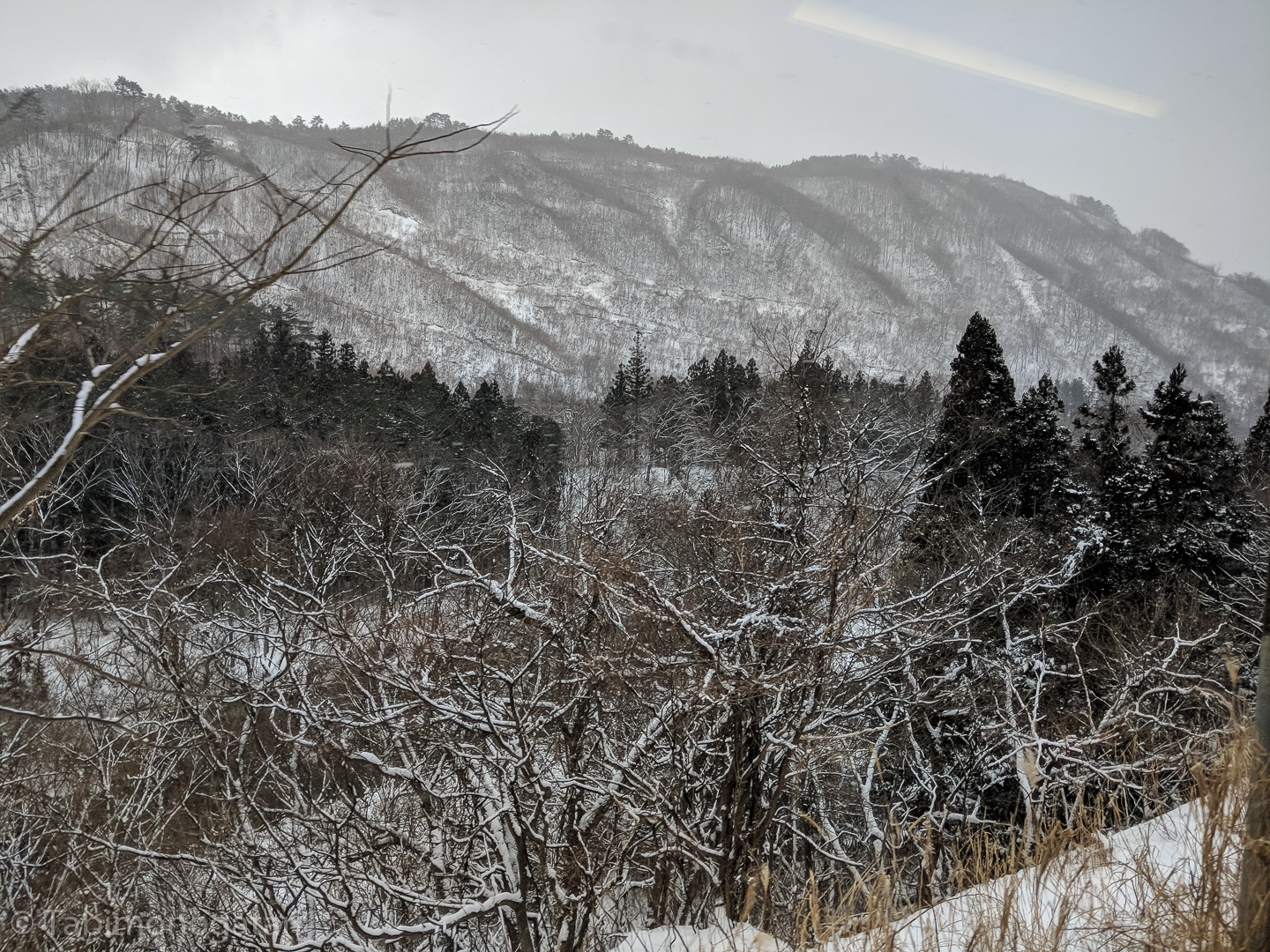 The ride ended in Oishida where a bus would cover the last stretch to Ginzan Onsen. Outside the station a long queue had formed. The bus departed once in two hours, so was worried that I would not be able to board the bus. Luckily two buses showed up and I barely fit into the second one. Now you know why I had to leave early.

Surely this place is no secret anymore, it was quite well visited, mostly by Chinese and Taiwanese tourists. The village is quite small, only accessible for pedestrians and can also be crossed in 10 minutes. 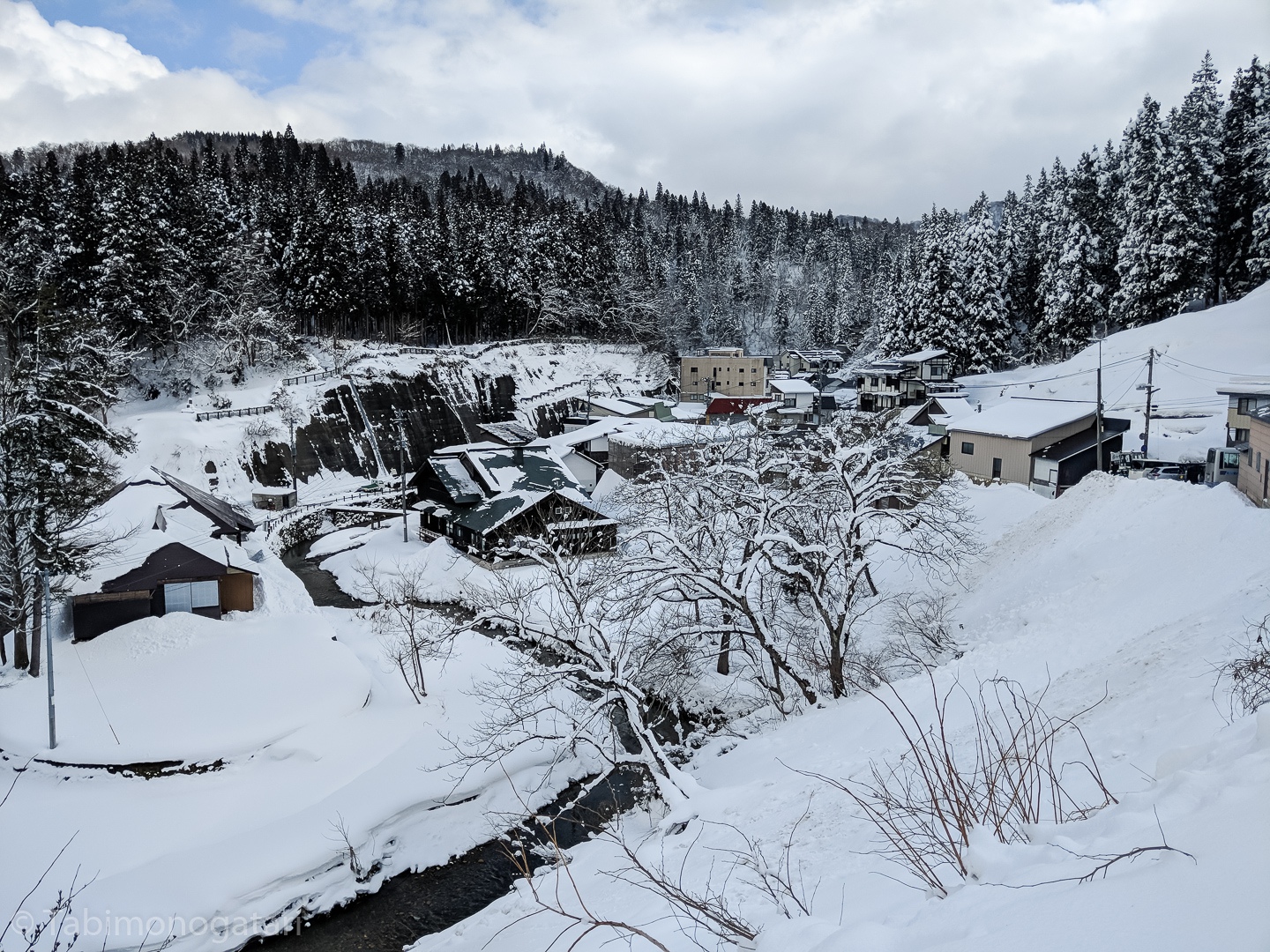 The old buildings, the bridges and lanterns and the central river all contributed to its charm and I imagine it would look even more beautiful at night. For such a view I would need to stay over which was not my plan this time. 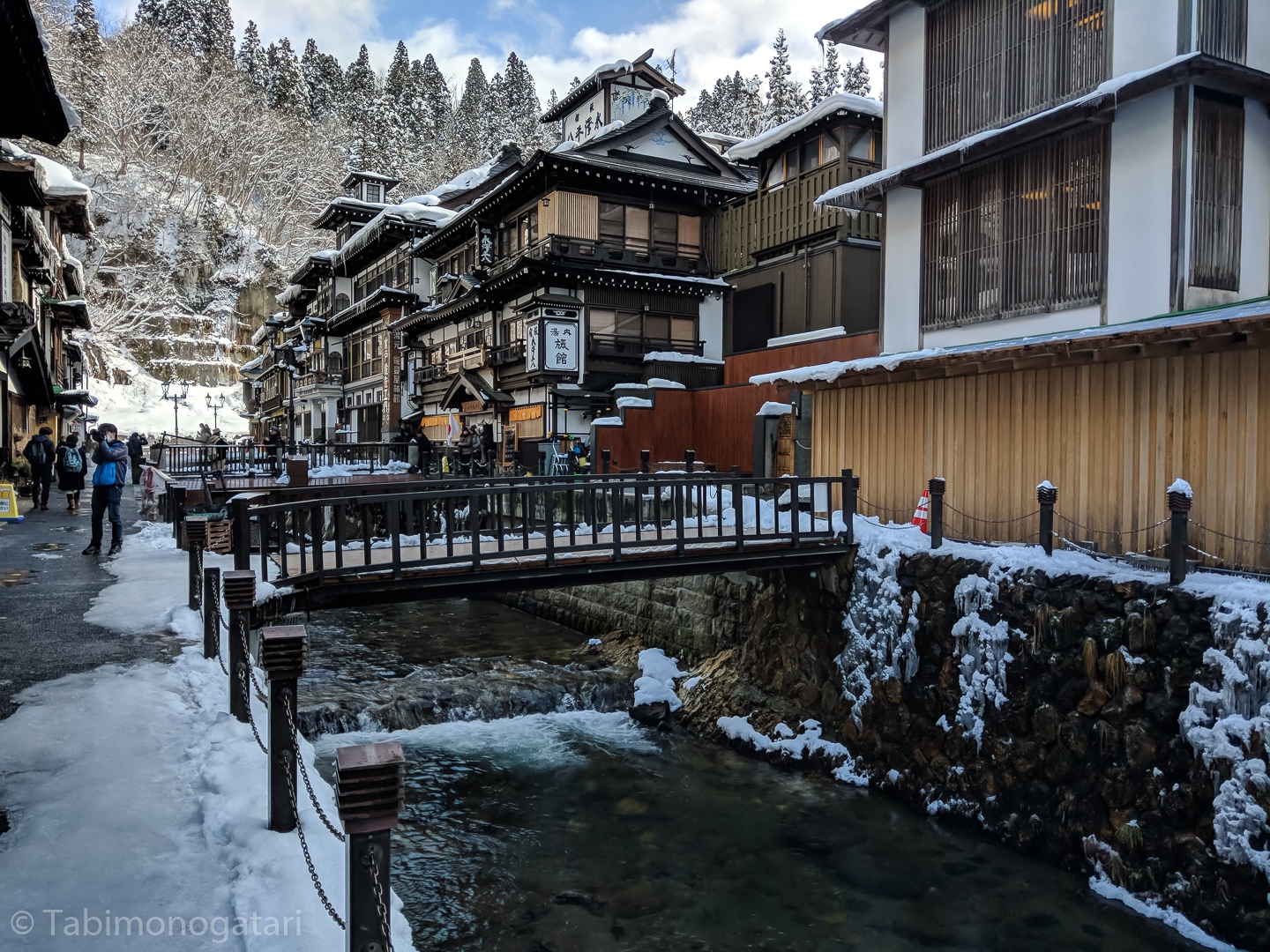 At the end of the valley on the ride side of the Shirogane river a soba restaurant invited me to come in. Soba seemed to be a local dish here in Yamagata, so I ordered a bowl of (chicken) meat soba, which was limited to 20 orders per day. The broth was cold but rich and the handmade noodles chewy.

Because the village is quite small and mostly consists of ryokan I could not visit, there was not much to do. That is why I decided to stay only for a few hours before leaving. The other more rewarding option would have been to stay a night at a ryokan which must be lovely. 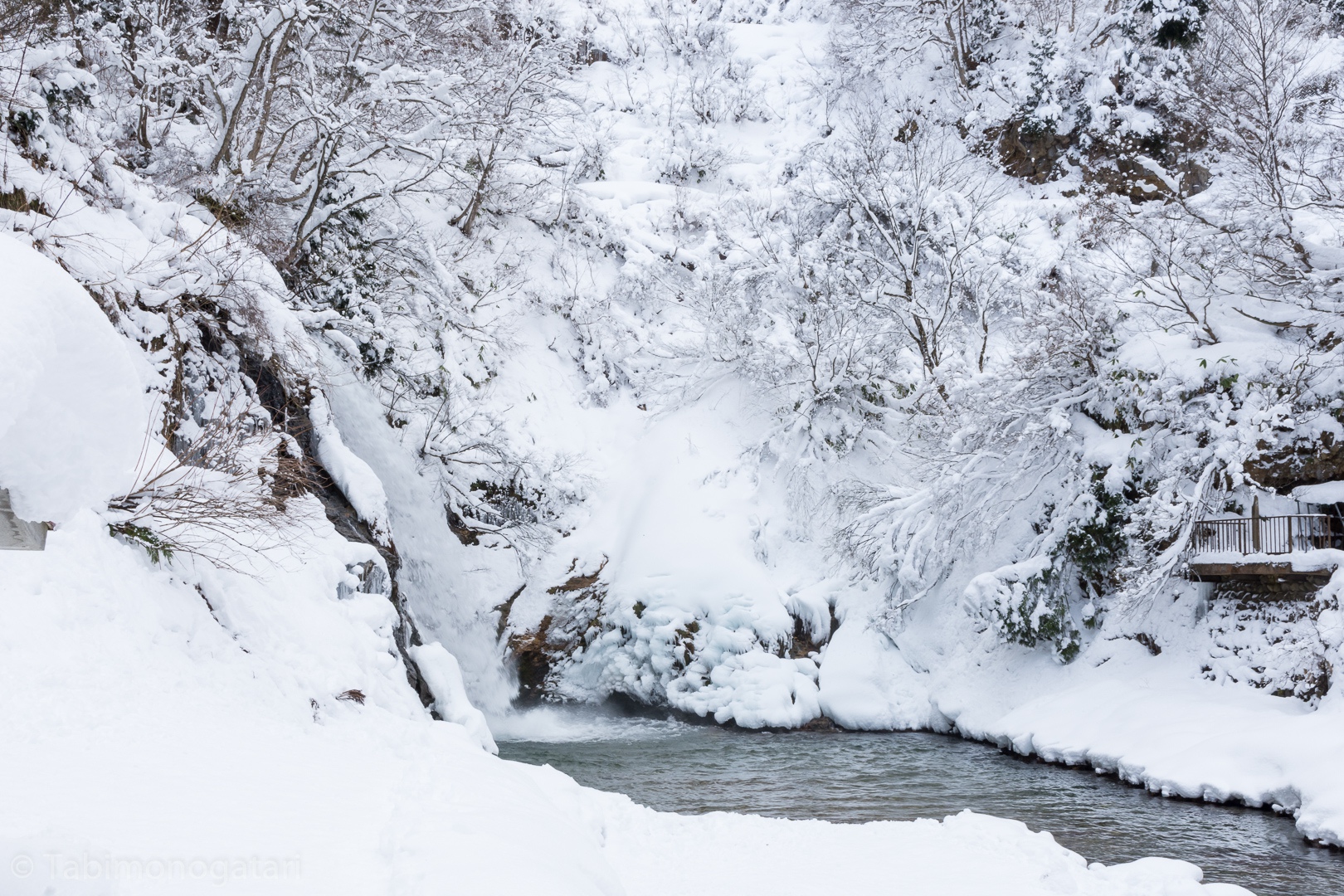 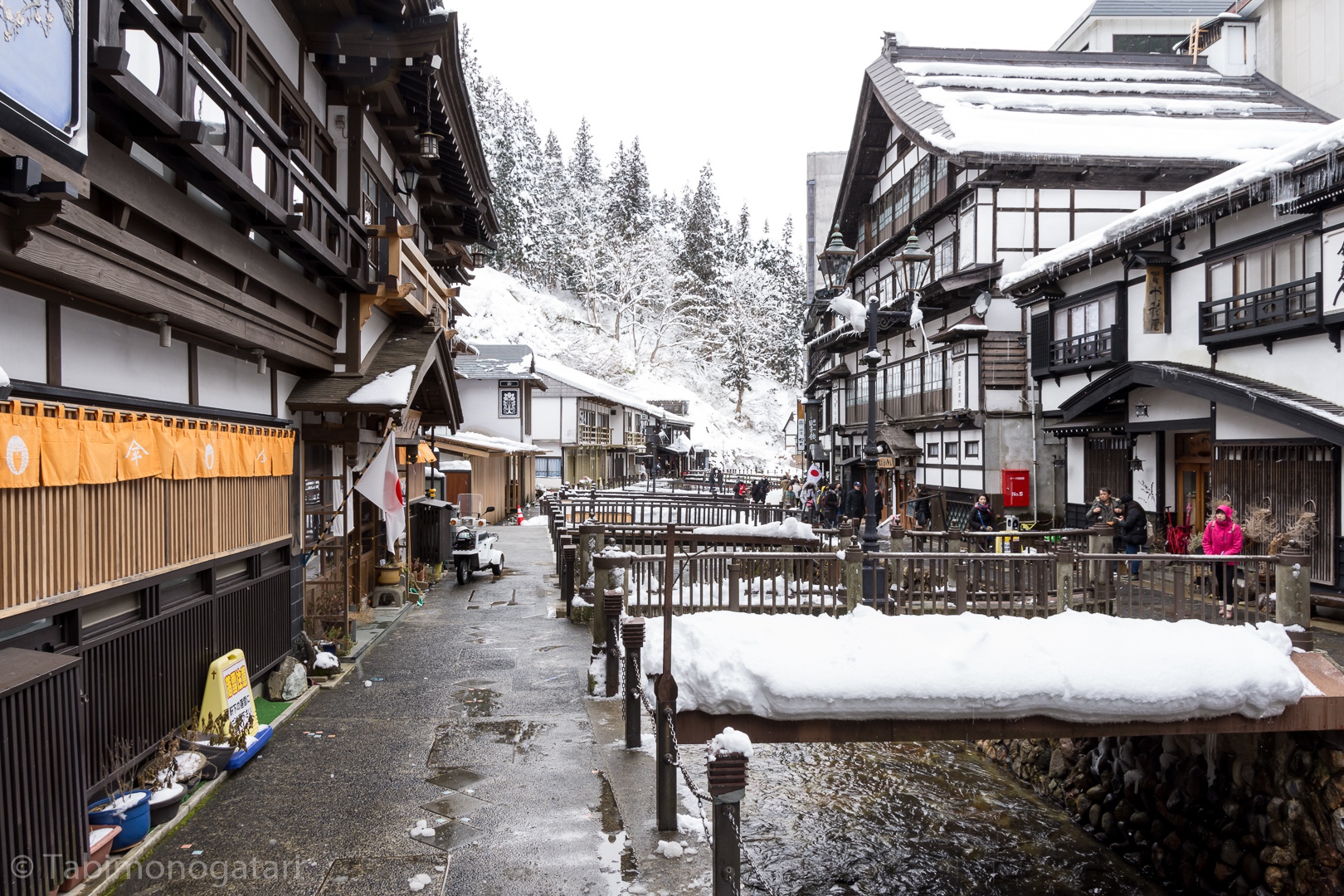 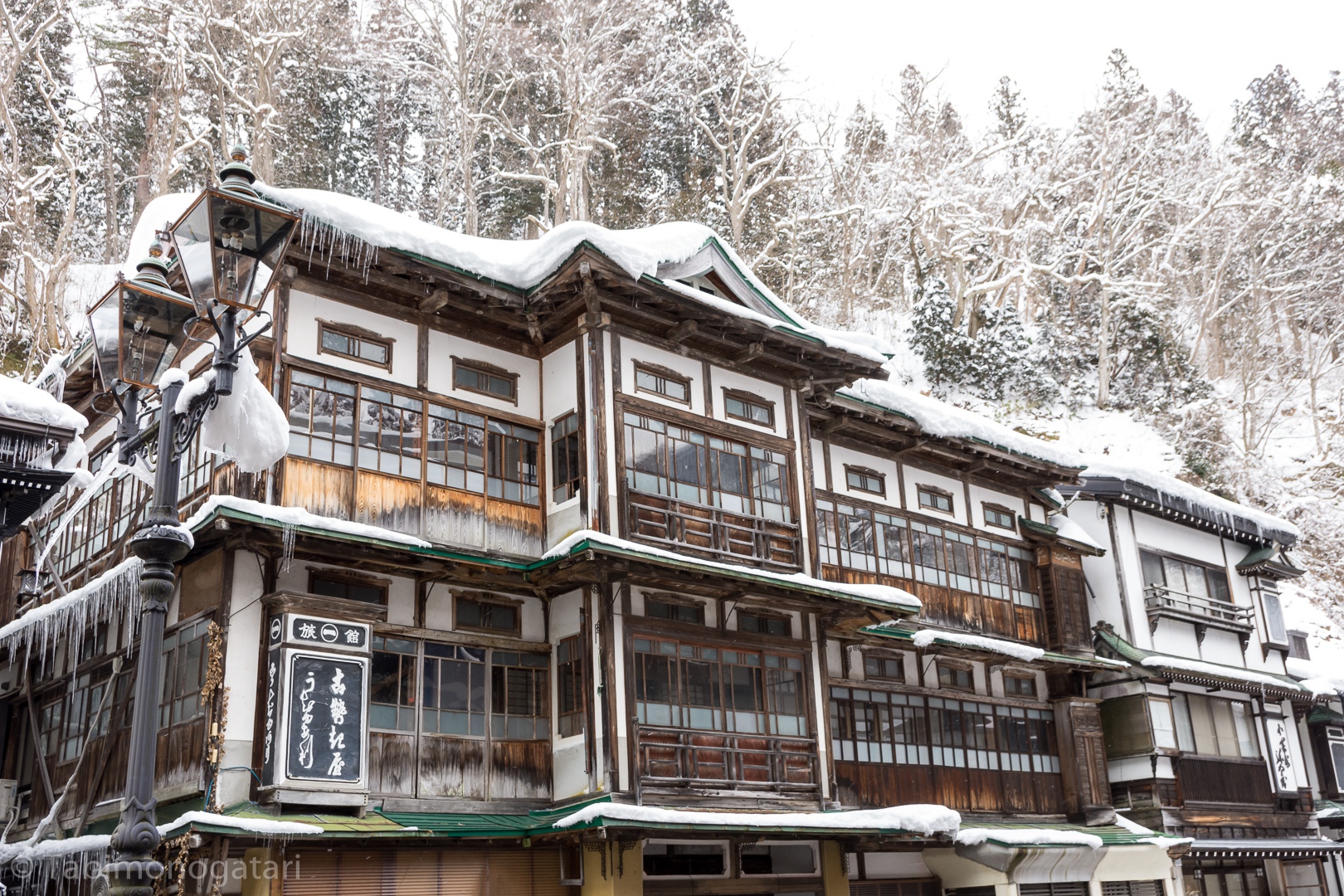 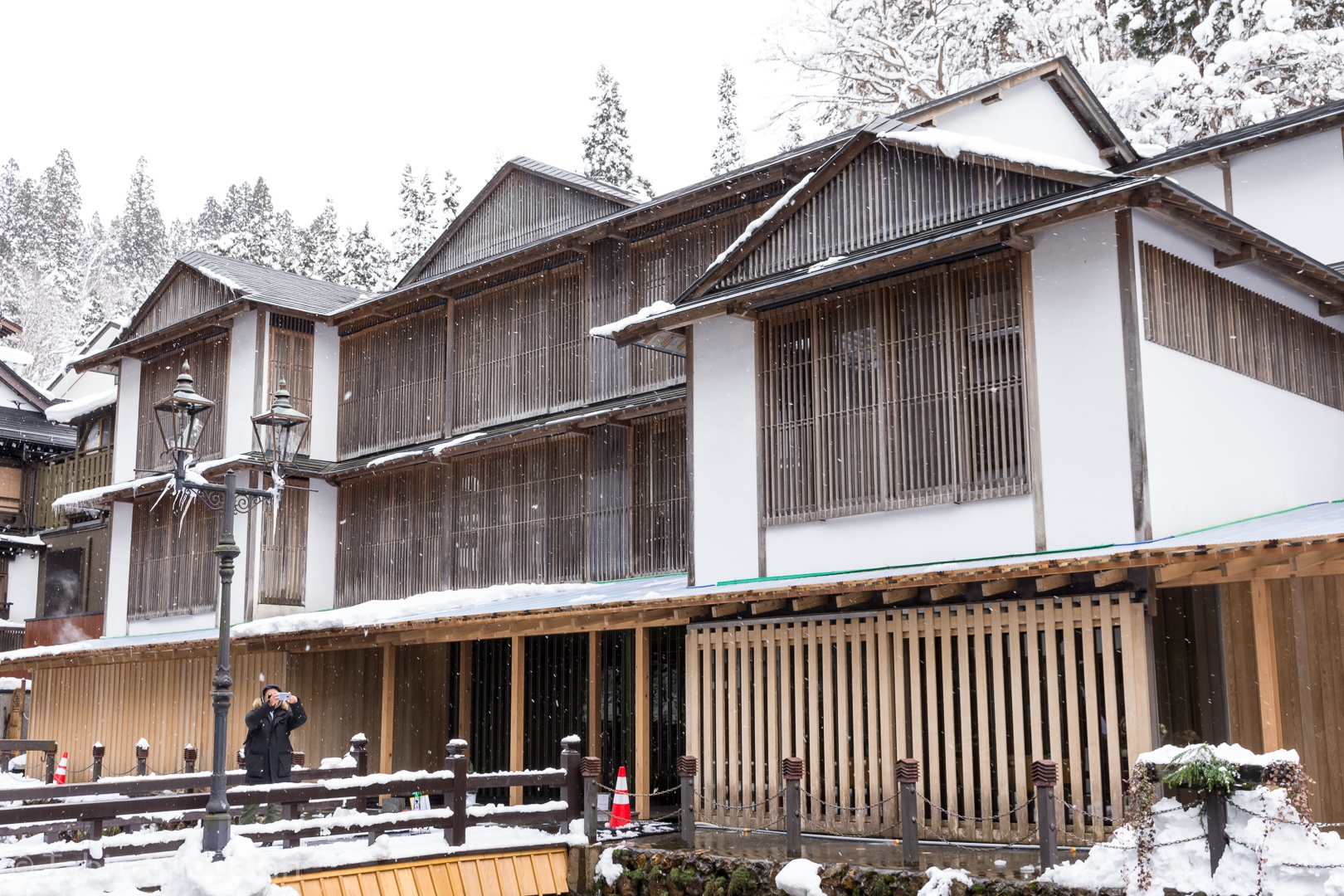 Of course I would not visit a hot spring town without dipping into the health promoting water. There were three hot spring baths open to the day-time visitors, but one of them was closed on the day I came. Also there is a foot bath outside. Thus, I tried my luck at Shirogane Onsen at the downstream end of the village. This was the most surreal onsen experience I ever had. 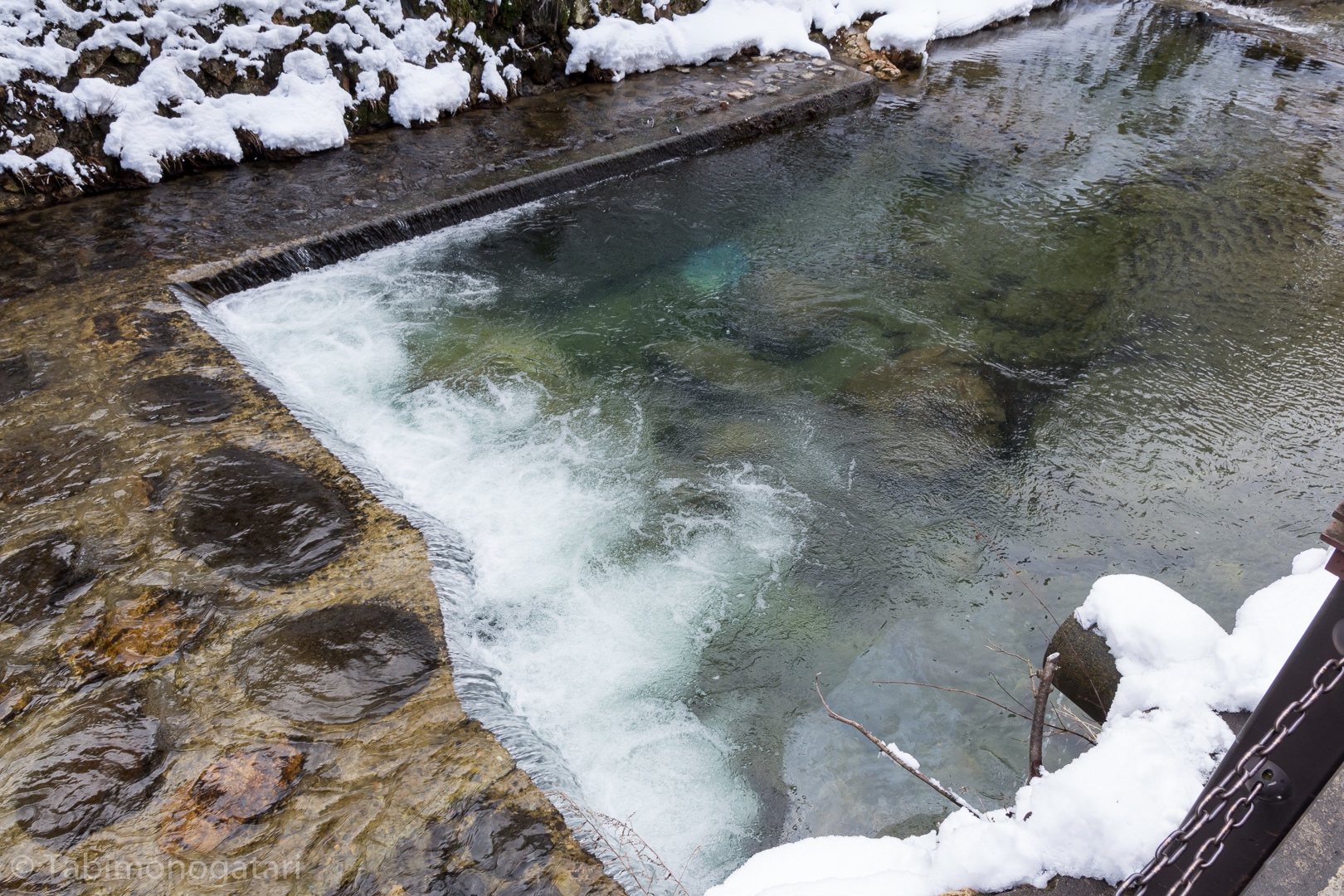 From the outside the building did not look large, but only when I entered I noticed that the whole bath was smaller than a one family house. Normally an onsen in a hot spring town is large and comfortable with plenty of space and multiple baths. Not so much here. The owner/person in charge was not very friendly but that was because I was a bit careless with my wet shoes. He told me to wait for a moment until there was more space in the bath. After another man left, I could enter the bath. I had to leave my bag pack behind though, so be aware of that if you want to go there.

When I entered the bath room I was again surprised. The whole room was 10 m² in size including the bath tub and only one of three washing station had a showerhead. Since that one was occupied, I tried to find a good match of boiling hot and freezing cold water inside a washing bowl before pouring it over myself. At least they provided a cheap body wash and shampoo.

The bath tub was small but large enough to fit 3-4 people. The water was very hot (~41 °C) as always and had a mild sulfur smell. This part was really nice after I adjusted to the temperature. I took my time in the bath and when I was about to leave there were three other people in the bath.

Then, the owner came in and said something to me I did not understand. I had the feeling he said something along the lines of me taking to much time, but when I came out, a group of people had just arrived. Given they were a family of five, there was no way they could fit in at this time, so they were declined.

That was a fun experience surely. I never saw such a small onsen before.

To make it on the bus for sure, I came early to the bus stop and everyone had to squeeze together to fit into the tiny bus. We had some delay but I just made it on the Shinkansen which surely would not have waited.

The journey to Fukushima was the same again and I also took a train back to Sendai. Here I had decided to stay the night because it was convenient to reach and would also offer a good starting point for tomorrow.

Sendai in Miyagi prefecture has several sights, but I did not plan to see much this time around. On my first time to Japan I made a brief stop in Sendai on my visit Matsushima. One thing I would not go around though was gyutan or cow tongue, which is the local dish of Sendai.

The choice was limitless, but I tried to stick to the original goal and ordered a gyutan teishoku. The meat was freshly grilled on a coal grill in front of me and was tender and very tasty. Afterwards, I also ordered gyoza from the Chinese menu and some local zunda mochi (made with edamame). 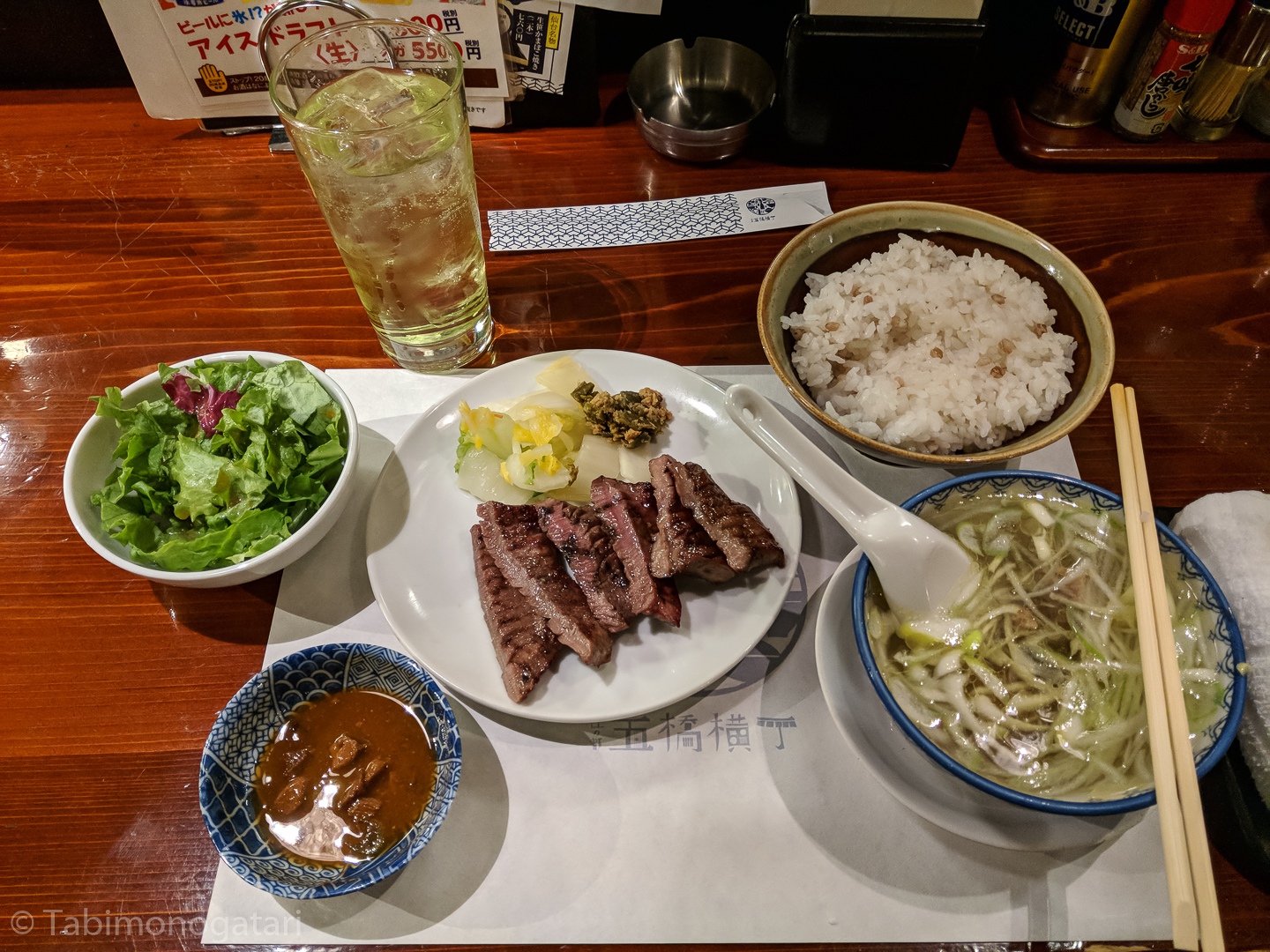 The next day I would travel all the way back to Osaka which will be the last stop on this trip. There I look forward to two more concerts, will do lots of shopping and eventually leave Japan.