Japanese trains are just amazing. I am sitting in the Hayabusa Shinkansen at >300 km/h as I am writing this piece. Not only is it comfortable, the provided internet also works perfectly fine. The landscape quickly moves past while I am heading northbound.

Today I left Tokyo for Hirosaki at the northern end of the Honshu main island. Thanks to the JR Pass, I could reserve a seat in the fastest train Hayabusa for free. Normally, the journey would cost above 150 € — single way.

At the hotel I checked my baggage for delivery with Yamato again, so I could travel light and comfortably. I sent it directly to Osaka where I would return to in three days. In the meantime, I travel only with a bag pack. 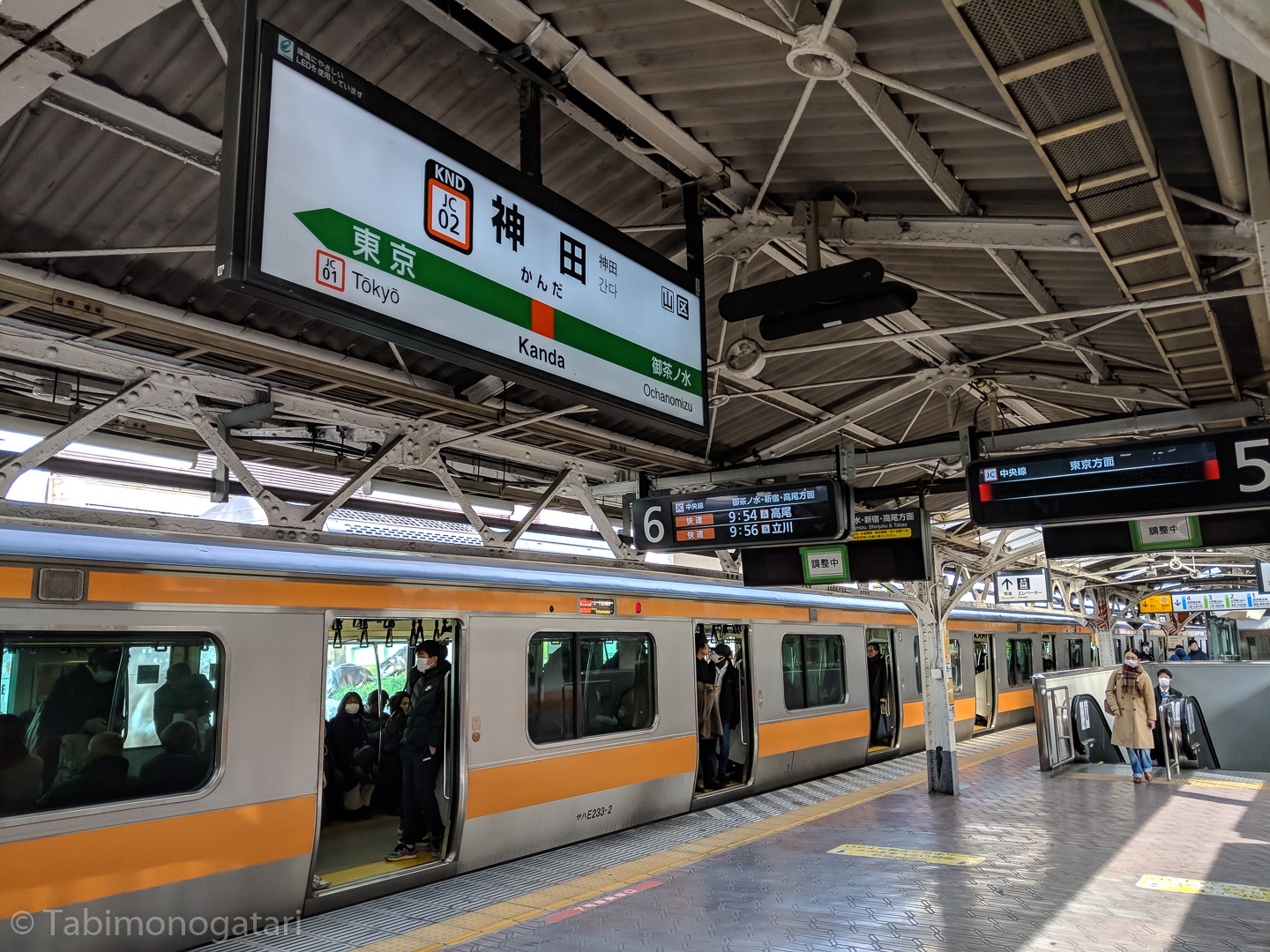 At Tokyo station I quickly picked up an ekiben, a packaged meal to eat on the train. The variety in the main store inside the JR ticket gates is overwhelming. All kinds of meals from every prefecture can be purchased here, including train shaped bento boxes. This time I chose the Daruma bento box, which does not only look fancy, but can also be reused. 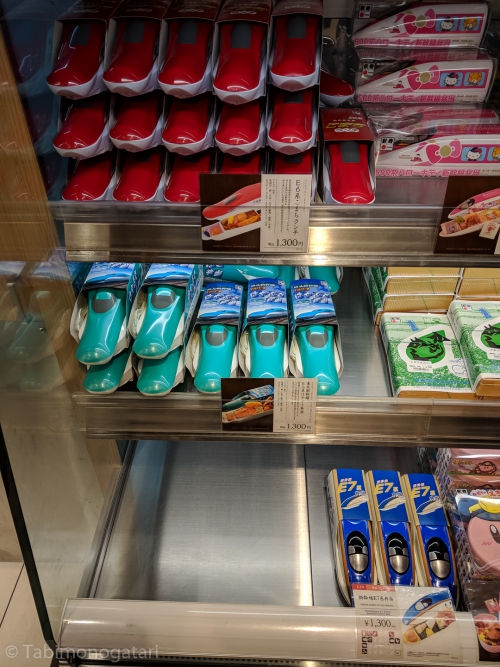 With this and a bottle of tea I proceeded to the platform. Just then, a double composition of my two favorite trains arrived – the green E5 and the red E6. The nose is stretched out like this to reduce the aerodynamic drag and, importantly, reduce the noise when entering the countless tunnels. 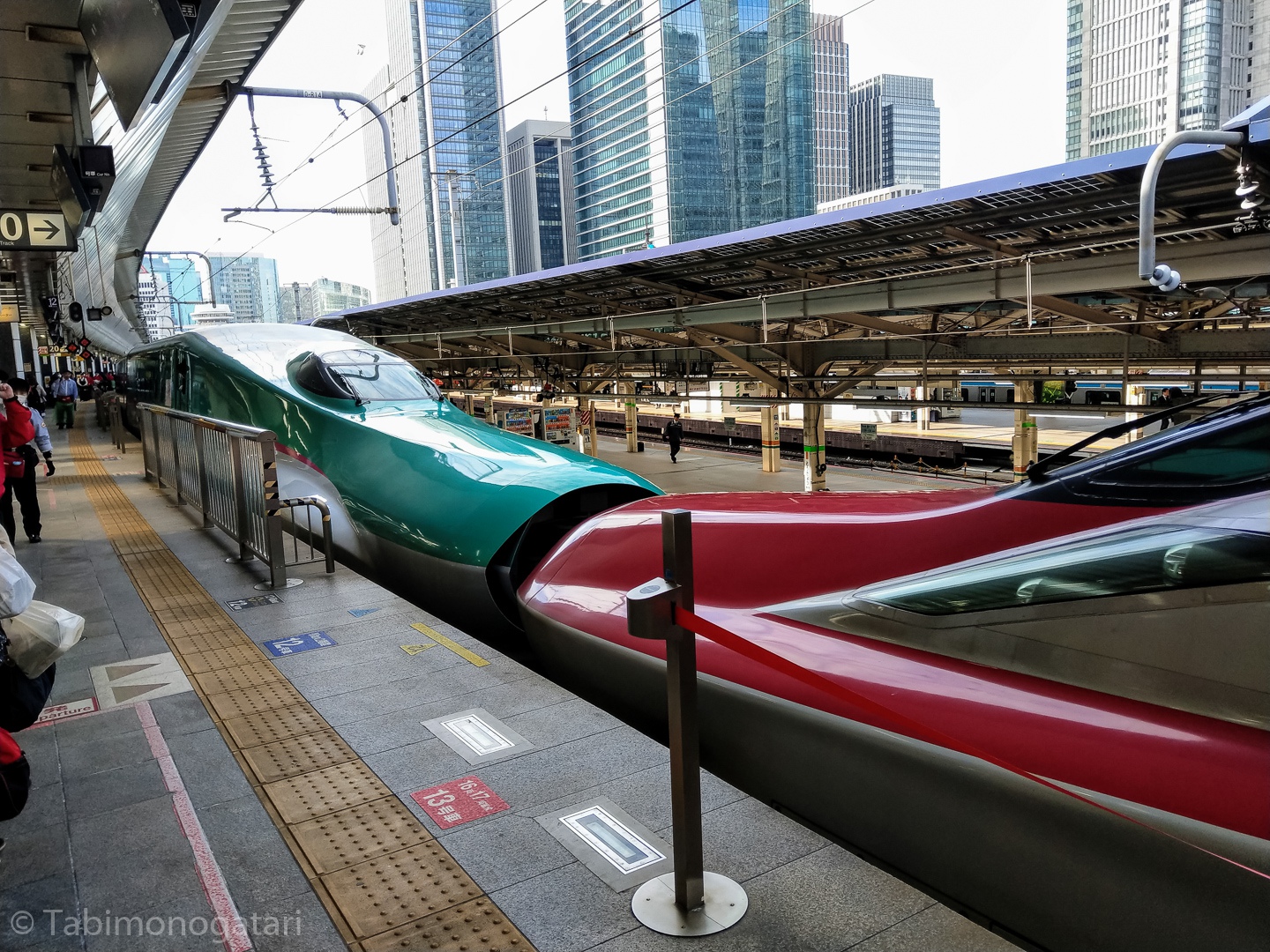 With enough space around me I could focus on getting a few articles done and before I realized we arrived in Sendai. Tokyo and Aomori lie 700 km apart and a car would need 8 hours for the journey. This train arrived three hours later. 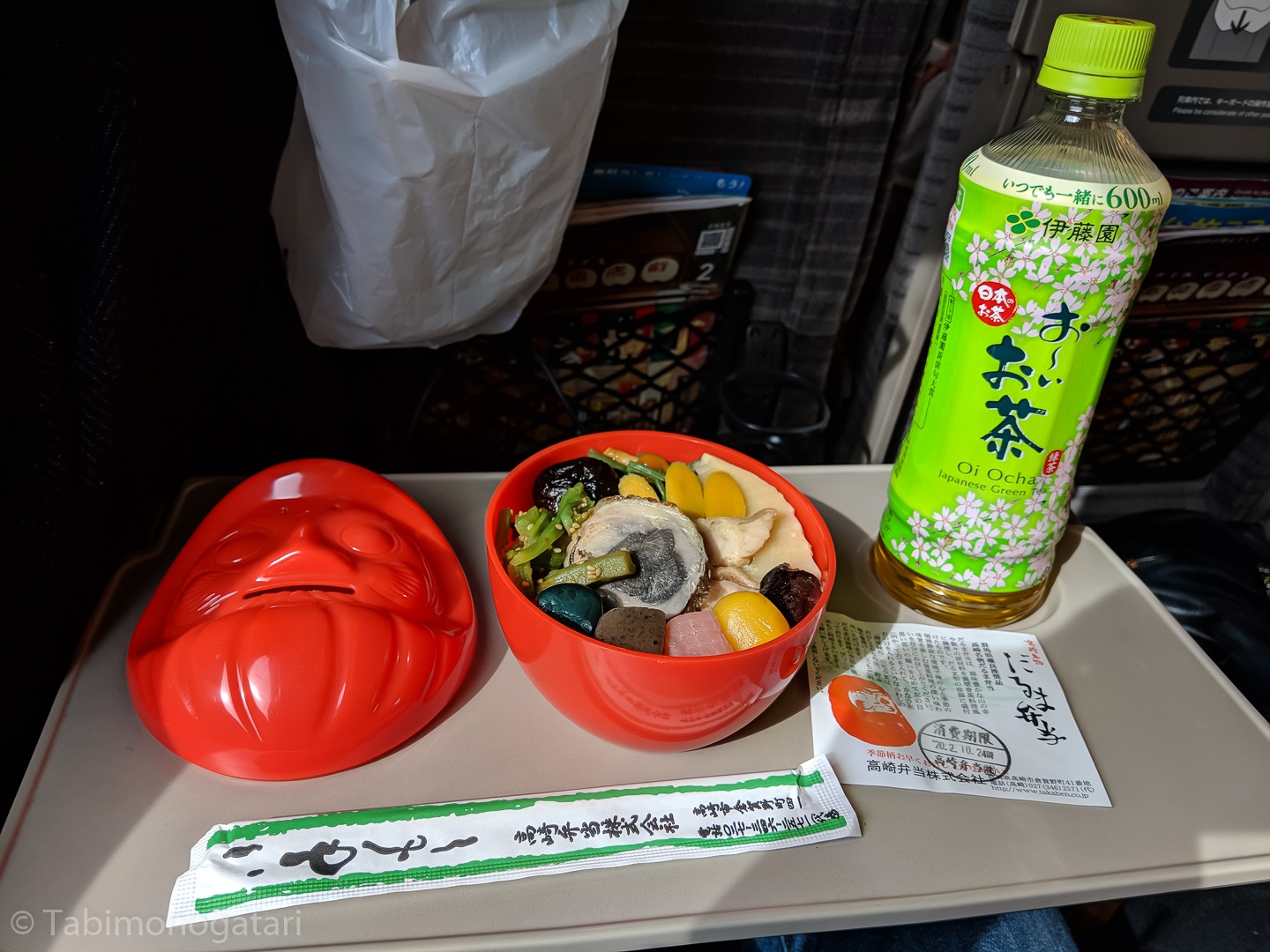 After Morioka the landscape became white. 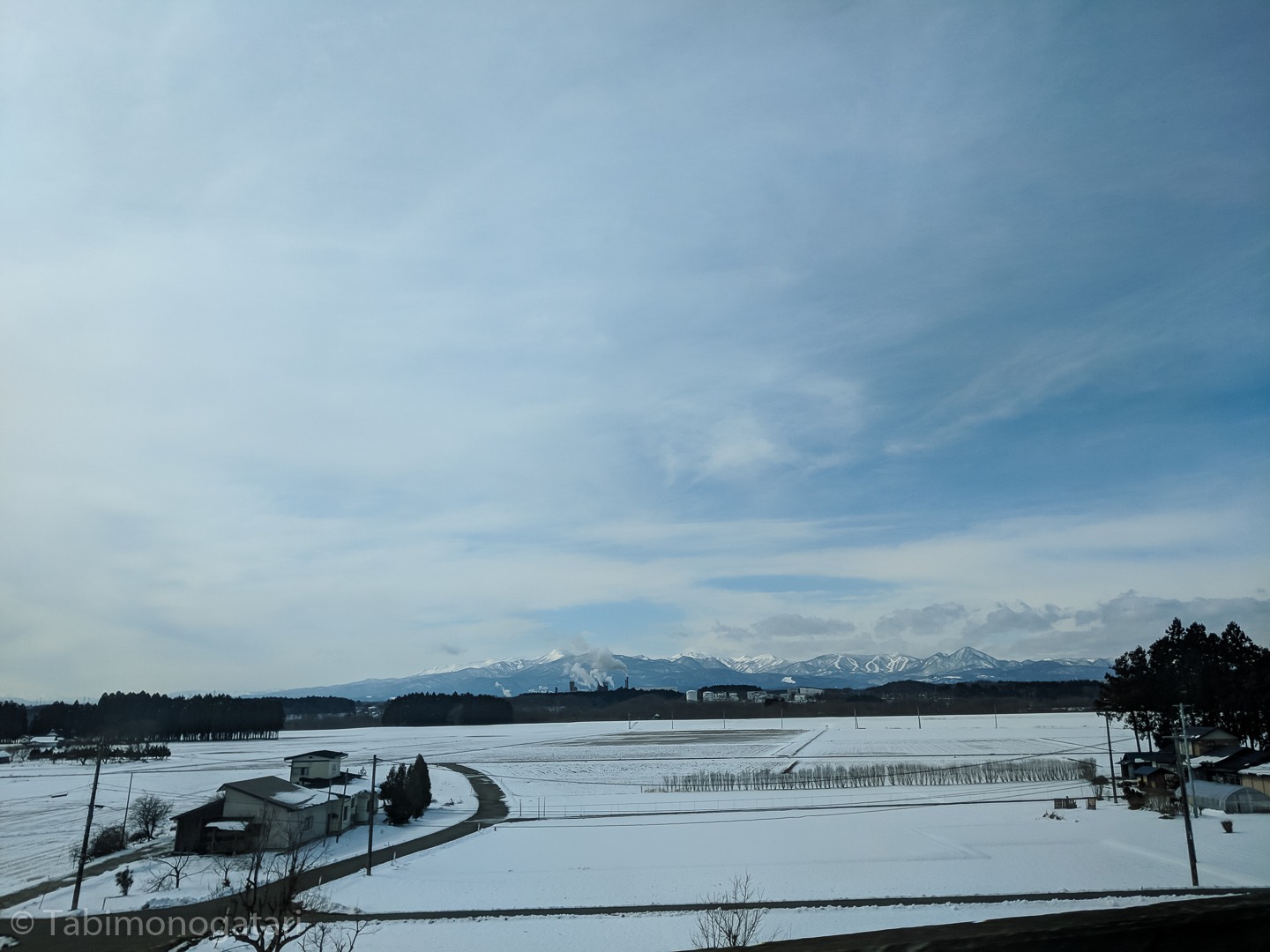 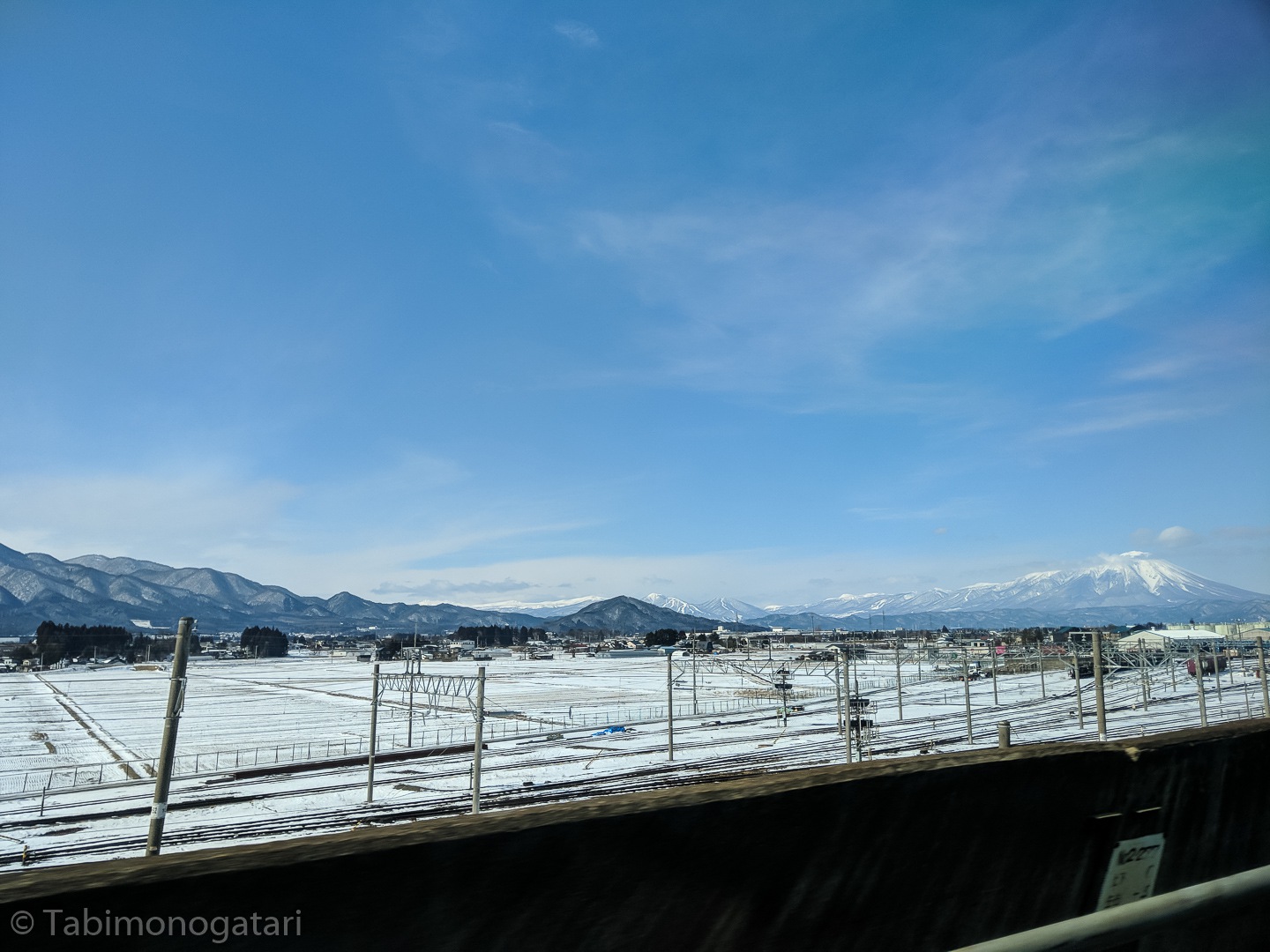 In Aomori I had to transfer one more time to reach Hirosaki. Up here it was way colder and the ground was covered by snow. I quickly made arrangements for tomorrow’s trains and then left the station. 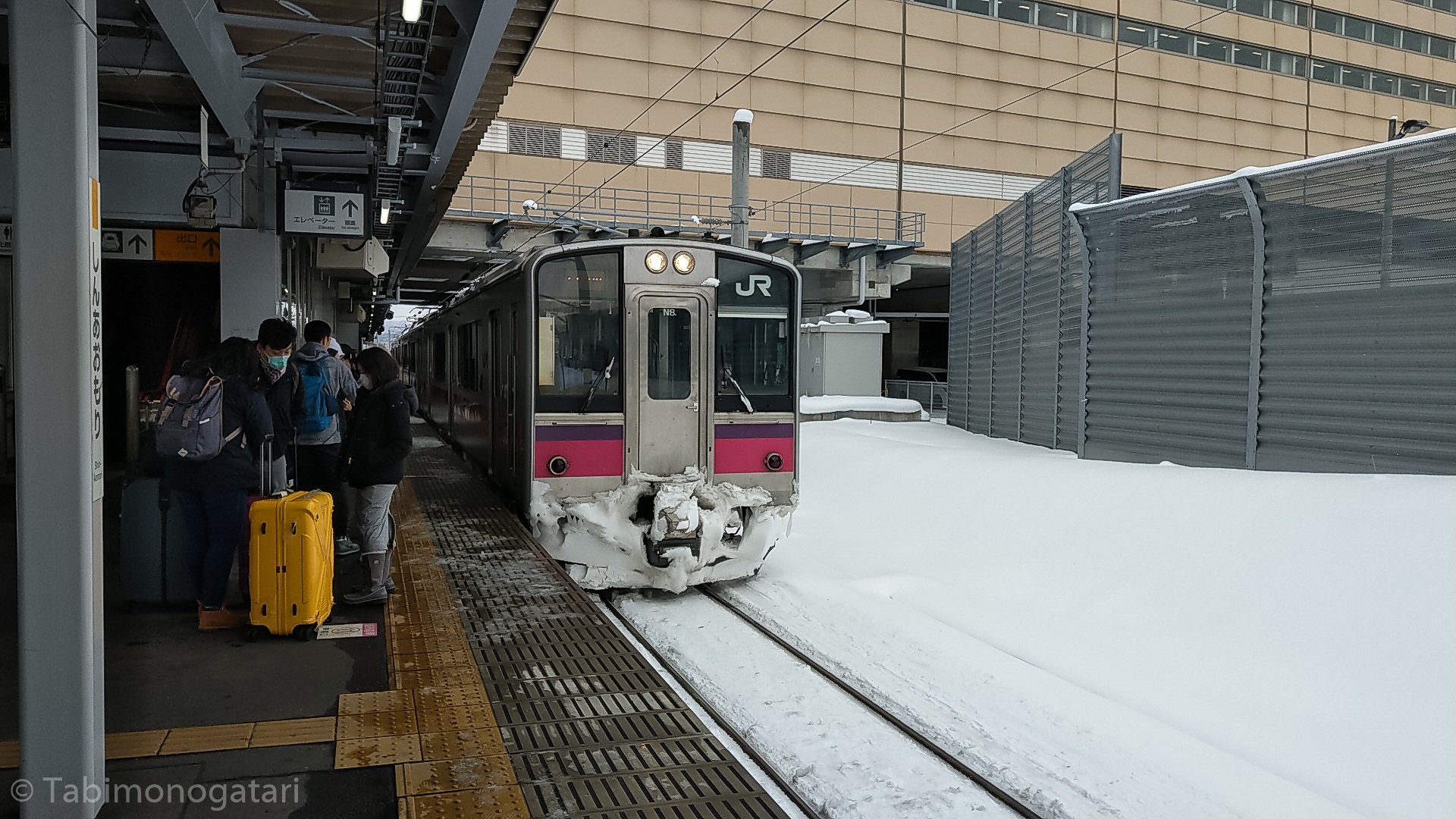 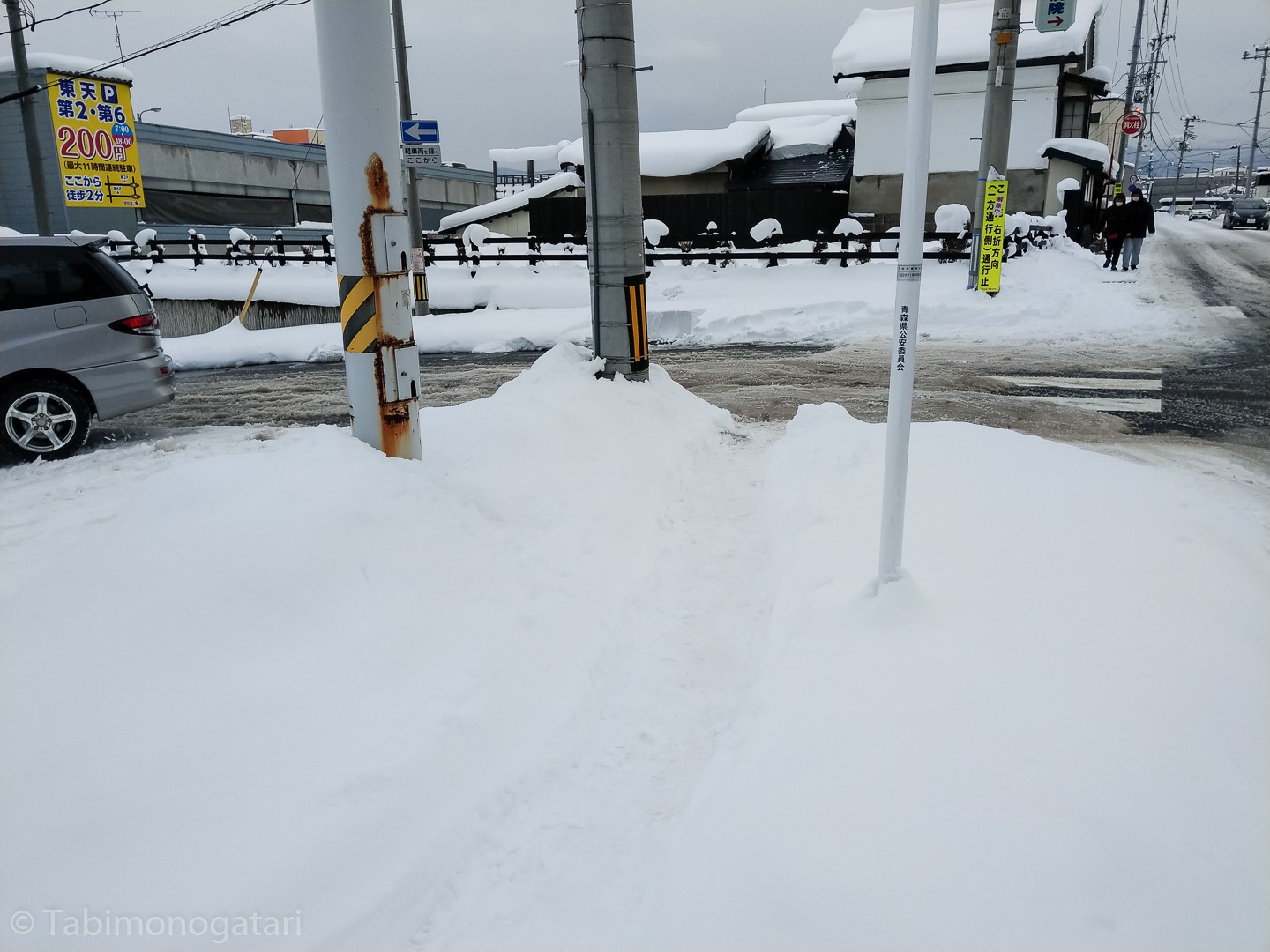 There is a tourist bus that loops between the station and the castle, the main attraction of the city. Still, I preferred to walk to my hotel. It was a fun experience walking across the snowy city, although I almost slipped several times, because the streets were not cleared. The fact that most streets also miss proper sidewalks made it even more challenging. 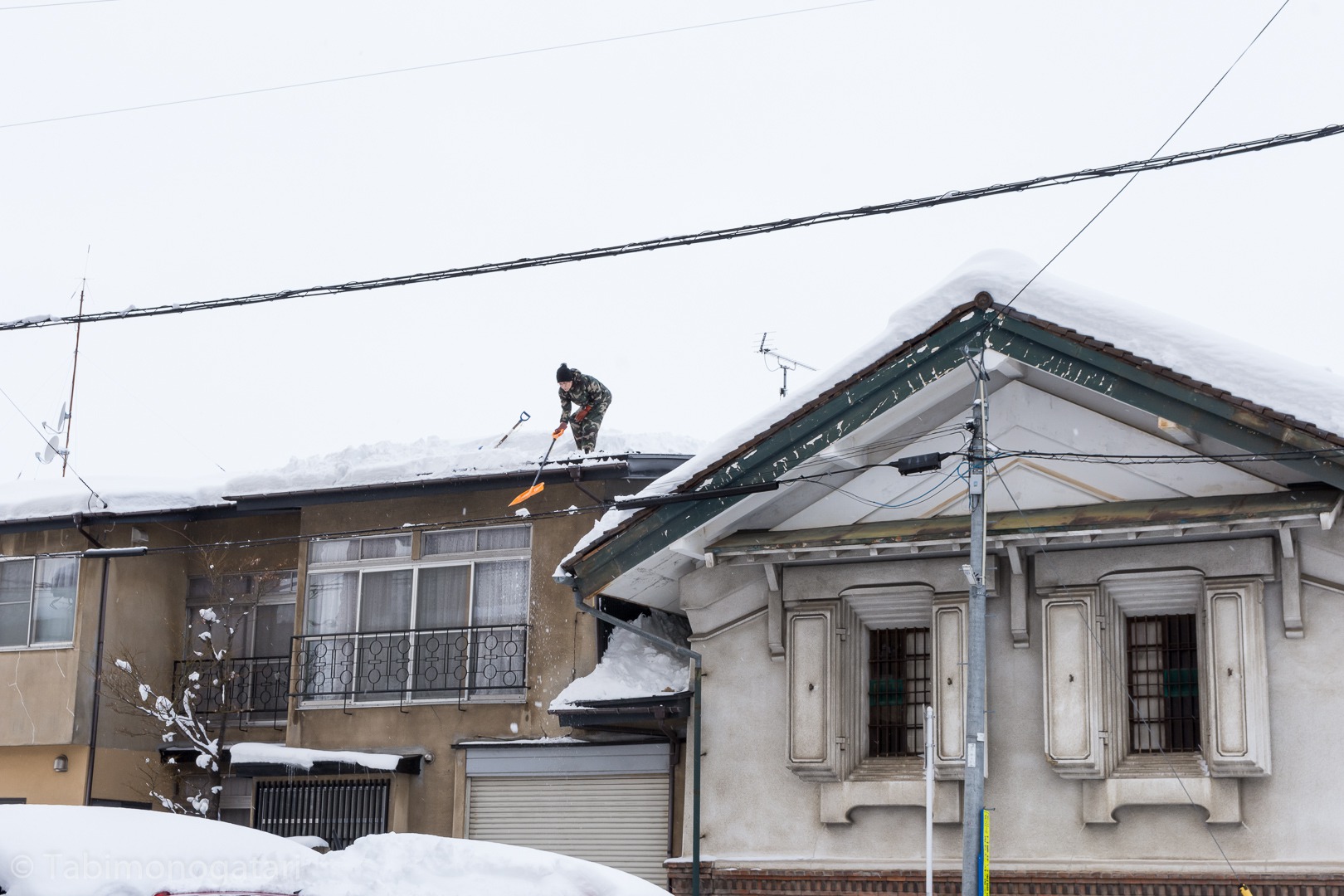 Hirosaki and the region are famous for several things. First, apples. Even though it is way colder than in central Japan, all the apples come from the local farms here. The second famous regional event is the Neputa Festival. This festival is conducted in many cities and villages in the region with the ones in Hirosaki and Aomori being the most famous ones. More about that below.

The hotel I stayed at was so nice, I am going to give a shout out here. The Dormy Inn chain is amongst the best budget hotels I know in Japan. While being inexpensive, they offer many amenities that I would miss in most hotels in this price segment. The staff was friendly and handed me an English language pamphlet outlining the services. Most importantly, on the top floor there is an open air bath, arguably from a local hot spring (if you dig far enough the water will be warm anywhere). In the lobby everyone could take free local apple juice and coffee. In addition, from 9:30pm on a free warm midnight snack was offered to guests. What I also appreciated was the shuttle service to the station.

Enough about the hotel, there were other things to explore in Hirosaki. A short walk led me to the southern end of the Hirosaki Castle Park which houses one of the prettiest sakura viewing spots in the country. Still, in winter it is equally nice in my opinion. 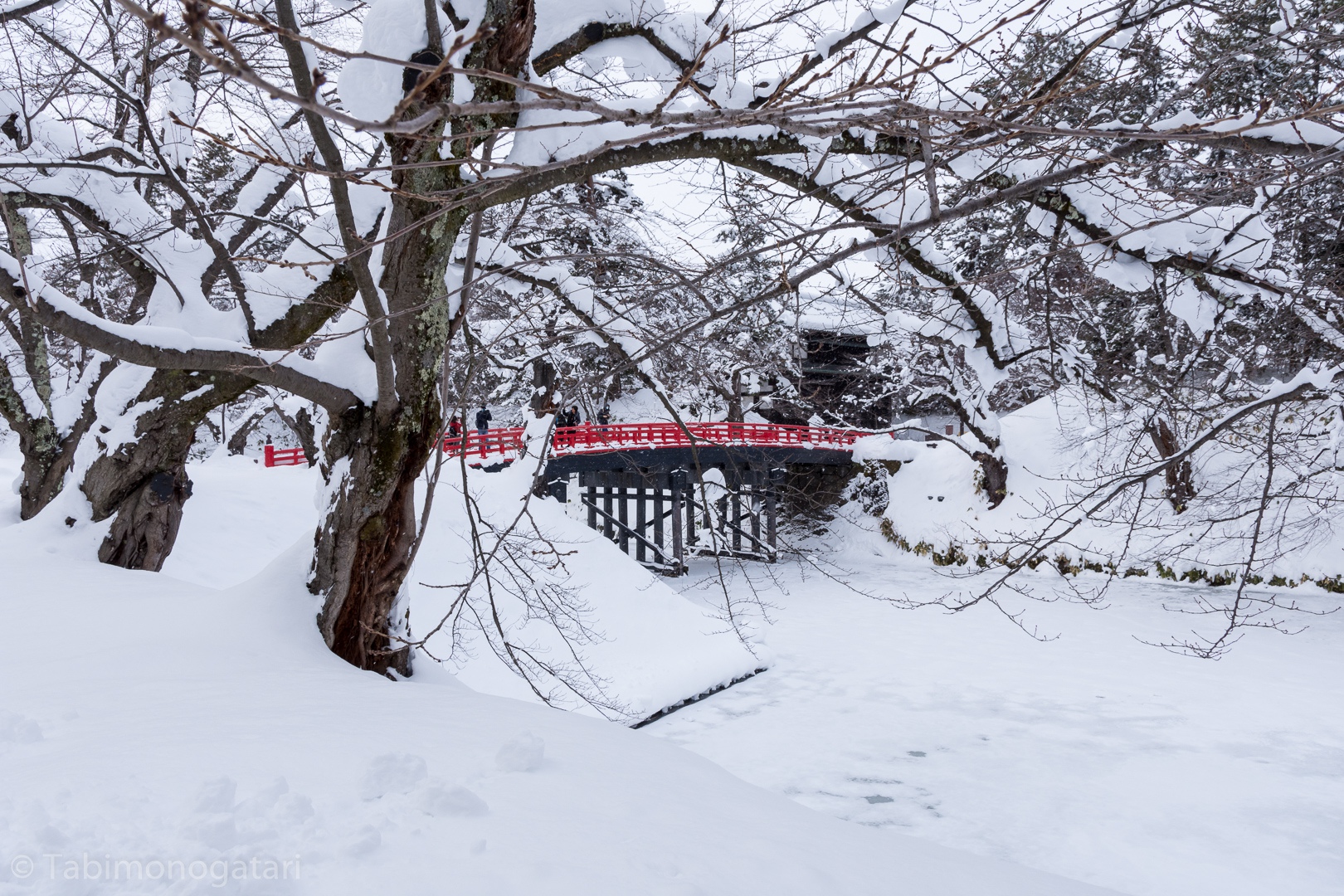 It began to snow lightly and walking through the snow-covered landscape warmed me up enough to withstand the cold. Still, buying a kairo (disposable heating pad) was a good idea. They are cheap, can be obtained in any conbini and keep you warm for 12 hours.

While there was still a lot of daylight, I walked across the park and passed the castle which was originally built in the 17th century, but was later rebuilt because of damages. I must say it was smaller than I expected. 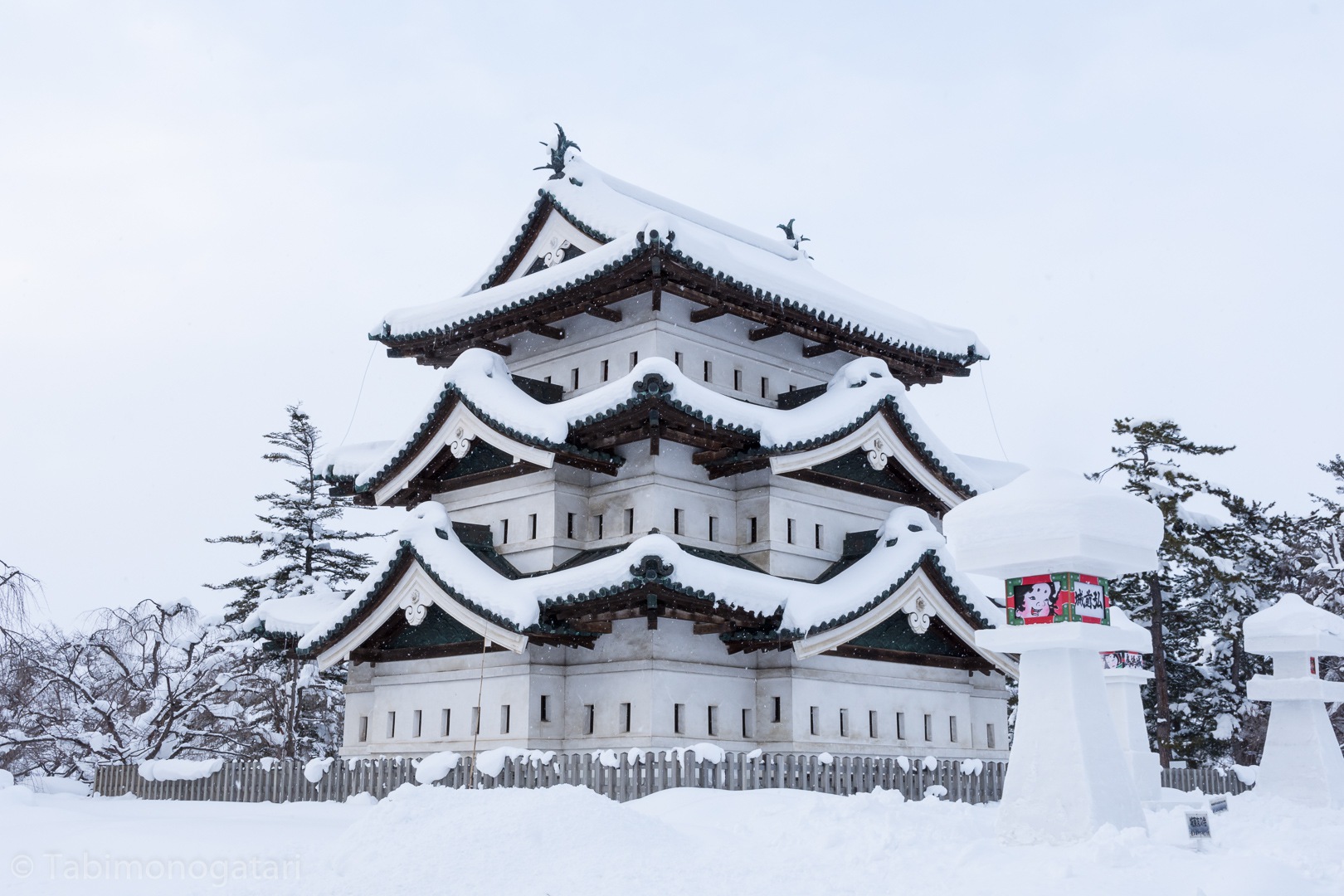 On the opposite side of the park, at the north-eastern corner lies a museum about the local Neputa Festival. I highly recommend it. The Neputa Festivals take place in early August for one full week across the local Tsuruga region, with the Aomori and Hirosaki ones being the most famous ones. 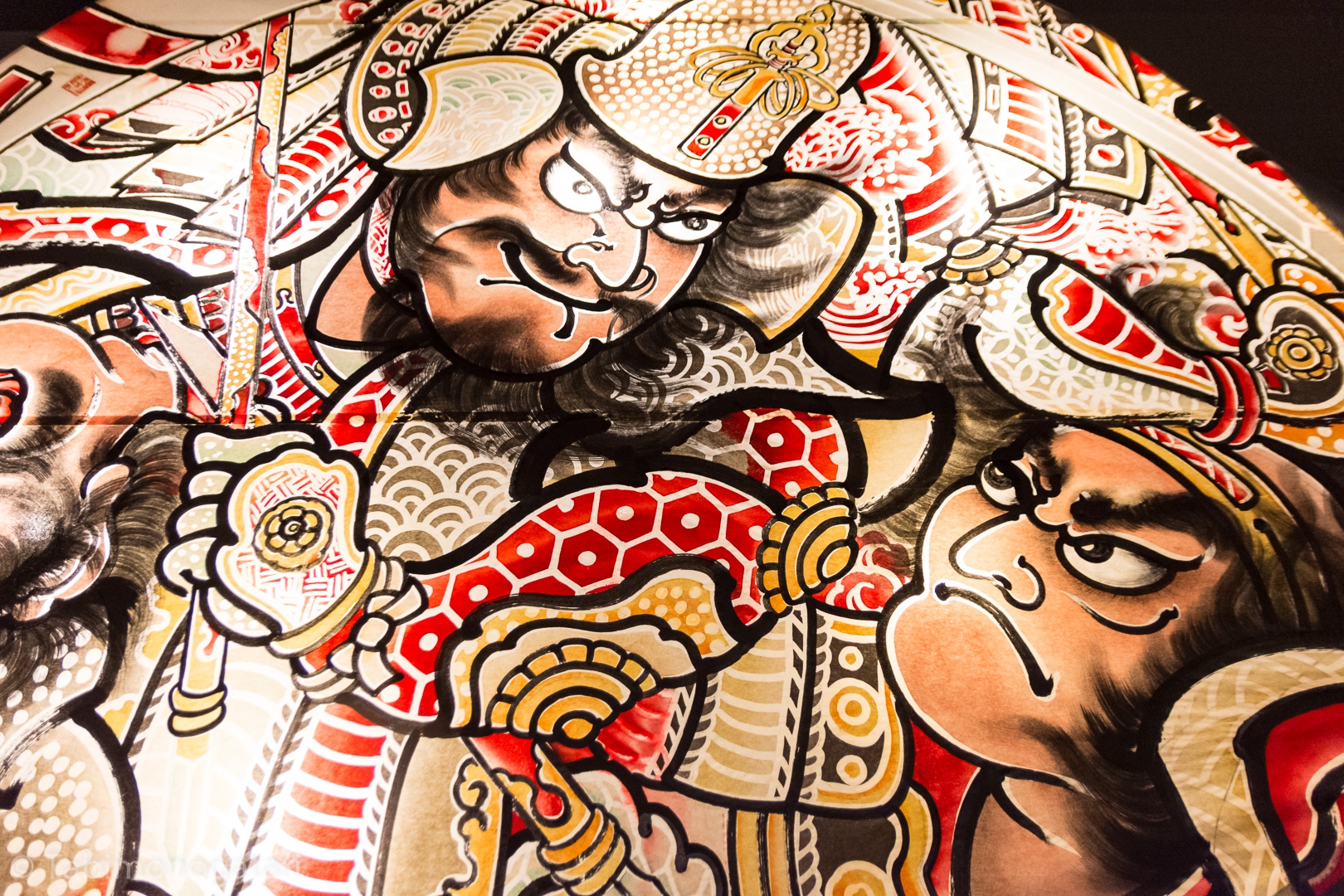 Right when I entered, a guide explained the important points and the origin of the festival to me. I was the only one in the museum at that point, but he started to play a large taiko for me that shook the ground.

The main hall of the museum was filled with the gigantic festival floats which were made from wood, paper and steel wires. All of them are original and some are used in the festival in summer. In addition, every year new ones are created by local craftsmen. 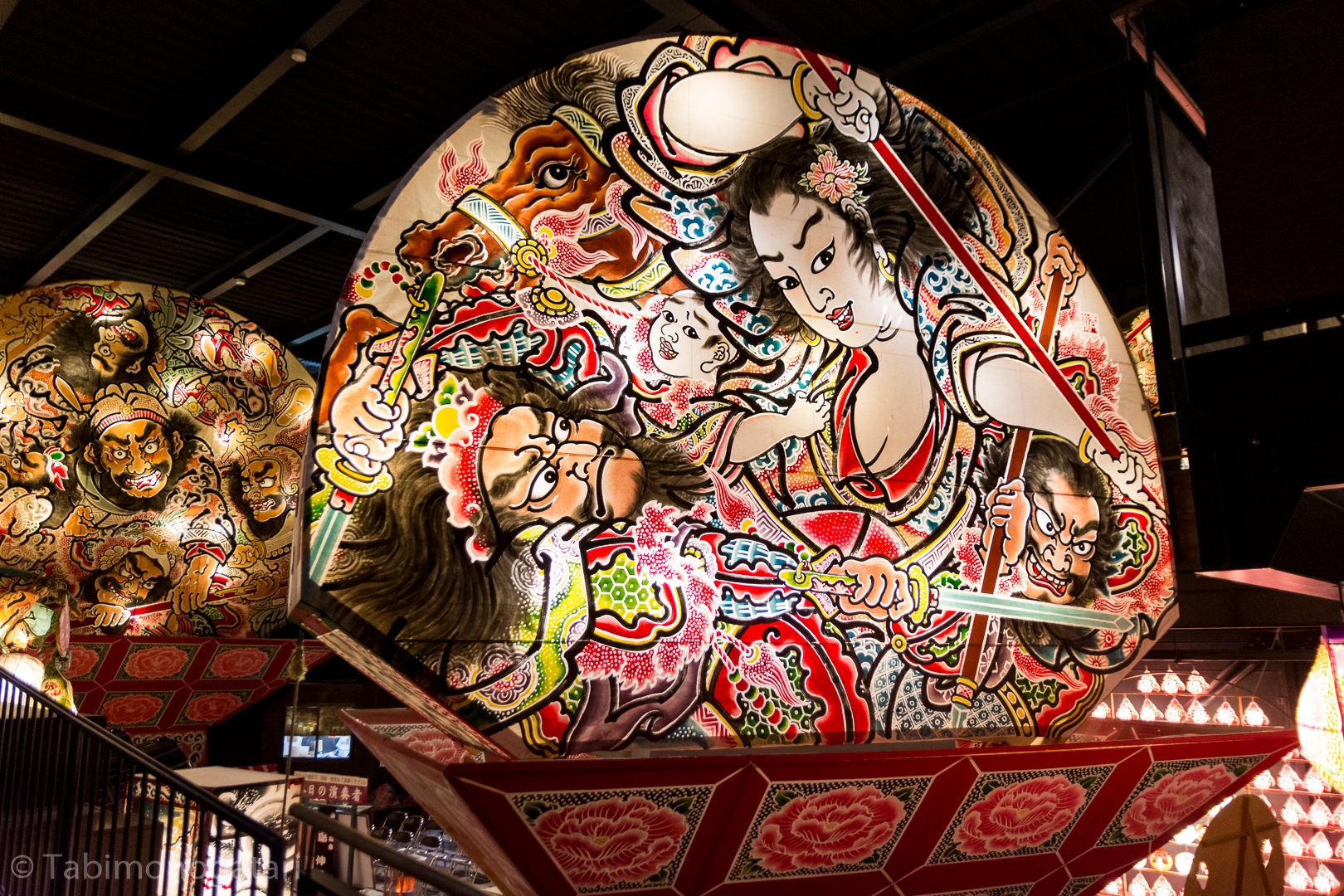 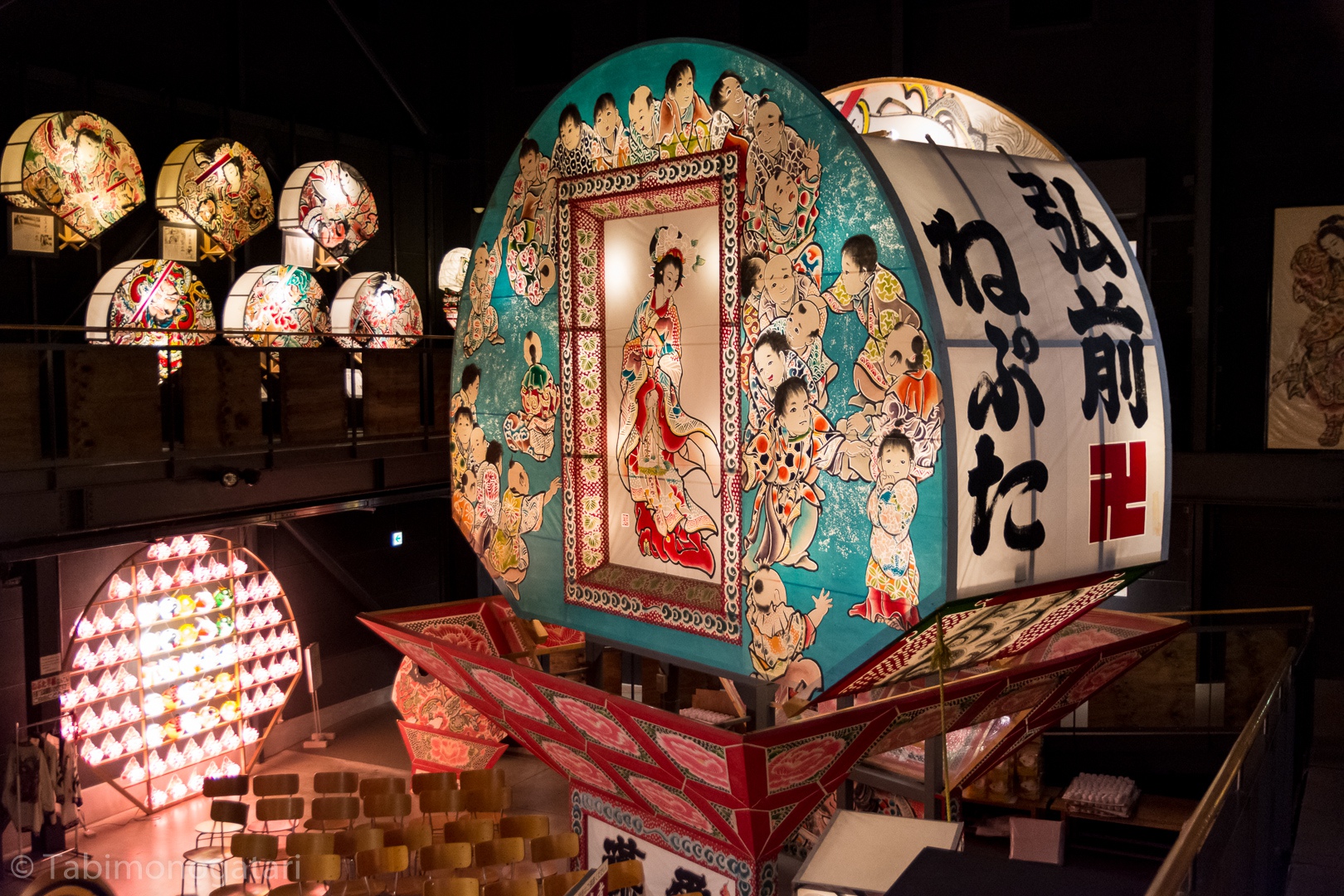 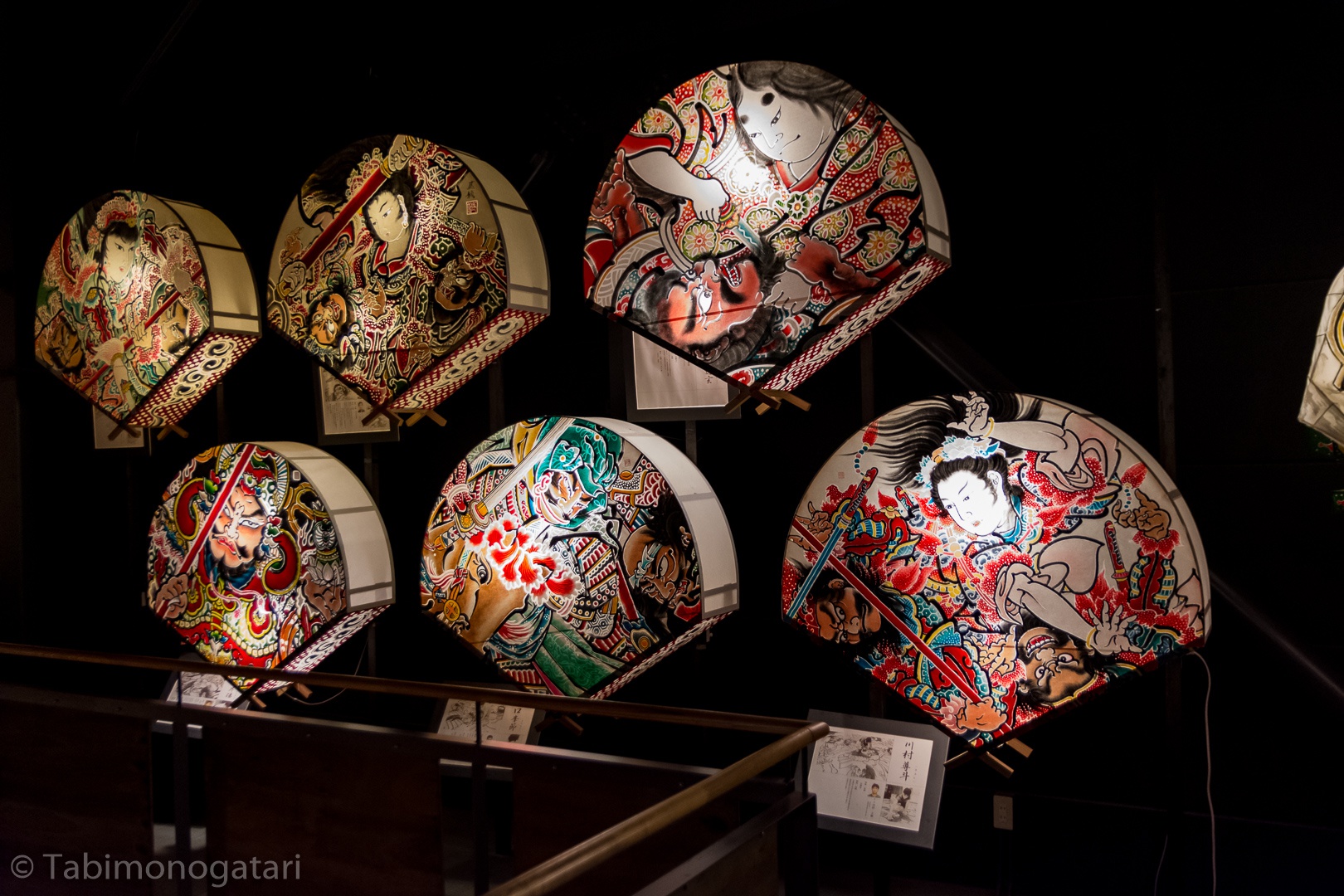 Later there were more exhibits about other local crafts, including lacquer pottery. Aomori is also famous for their apple products, so of course there were plenty of souvenirs on offer, ranging from apple tartes to cider. Lastly, there was a demonstration about spinning tops, which were beyond the typical ones. Some of them divided into multiple pieces while spinning and others made sounds while spinning. 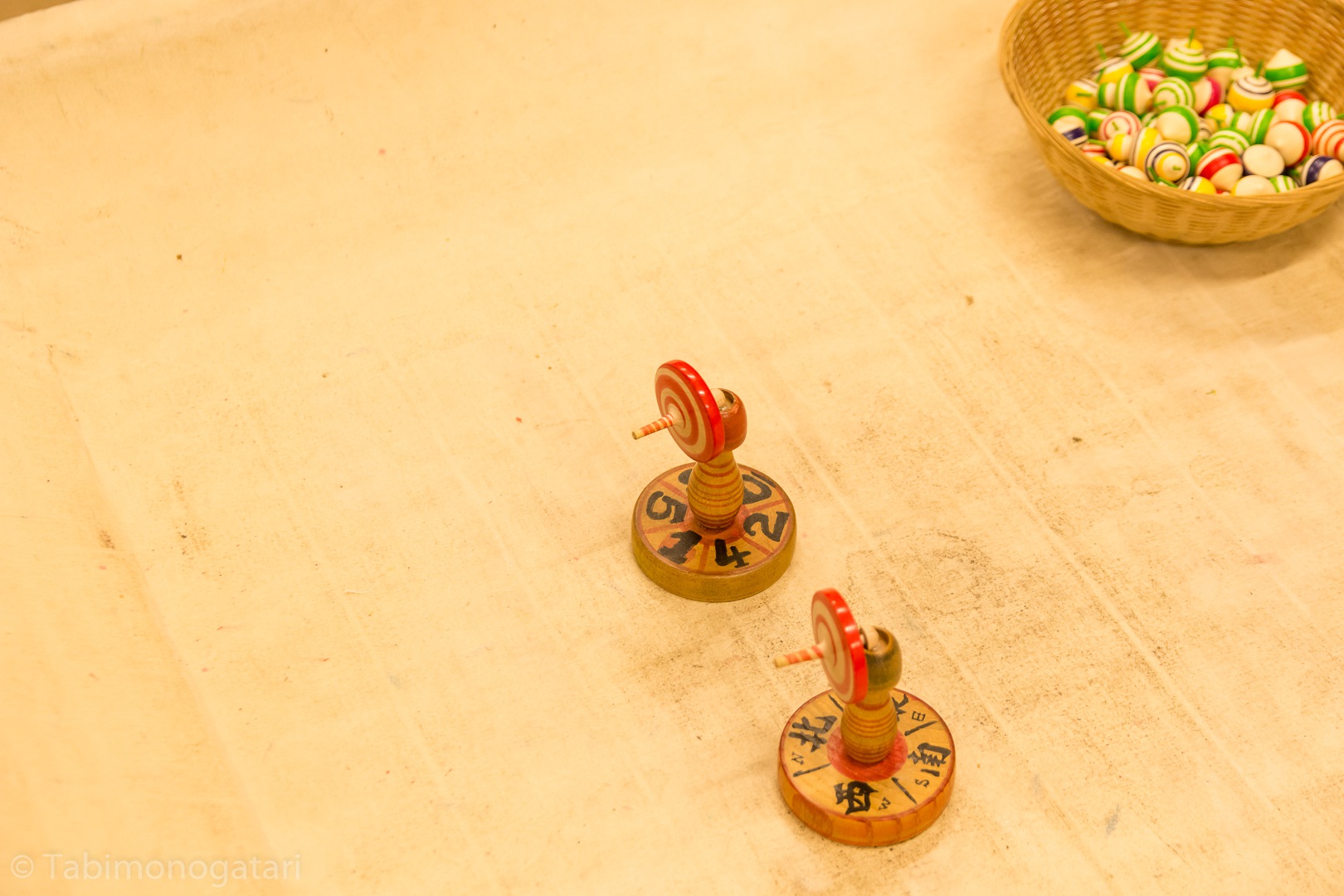 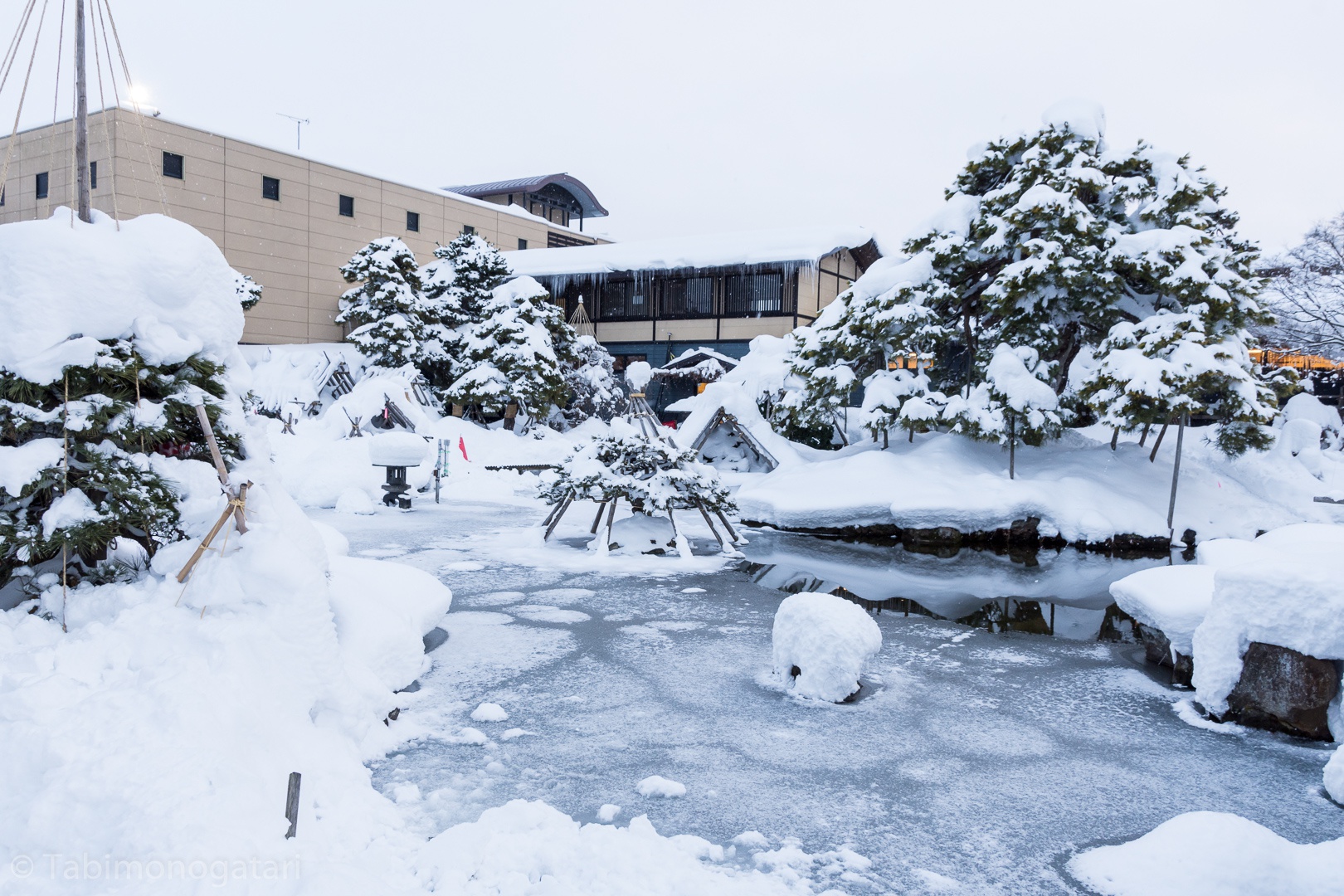 Around these days, the Hirosaki Snow Lantern Festival took place, this was the major reason for me to come today. In the northern corner of the park there was a snow festival with an ice sculpture and yatai food stalls. Many offered hot staples like ramen and oden and also yakiika, karaage and corn dogs. With a portion of oden I sat down in a tent in front of a heater and warmed myself up while I waited for the sun to set. 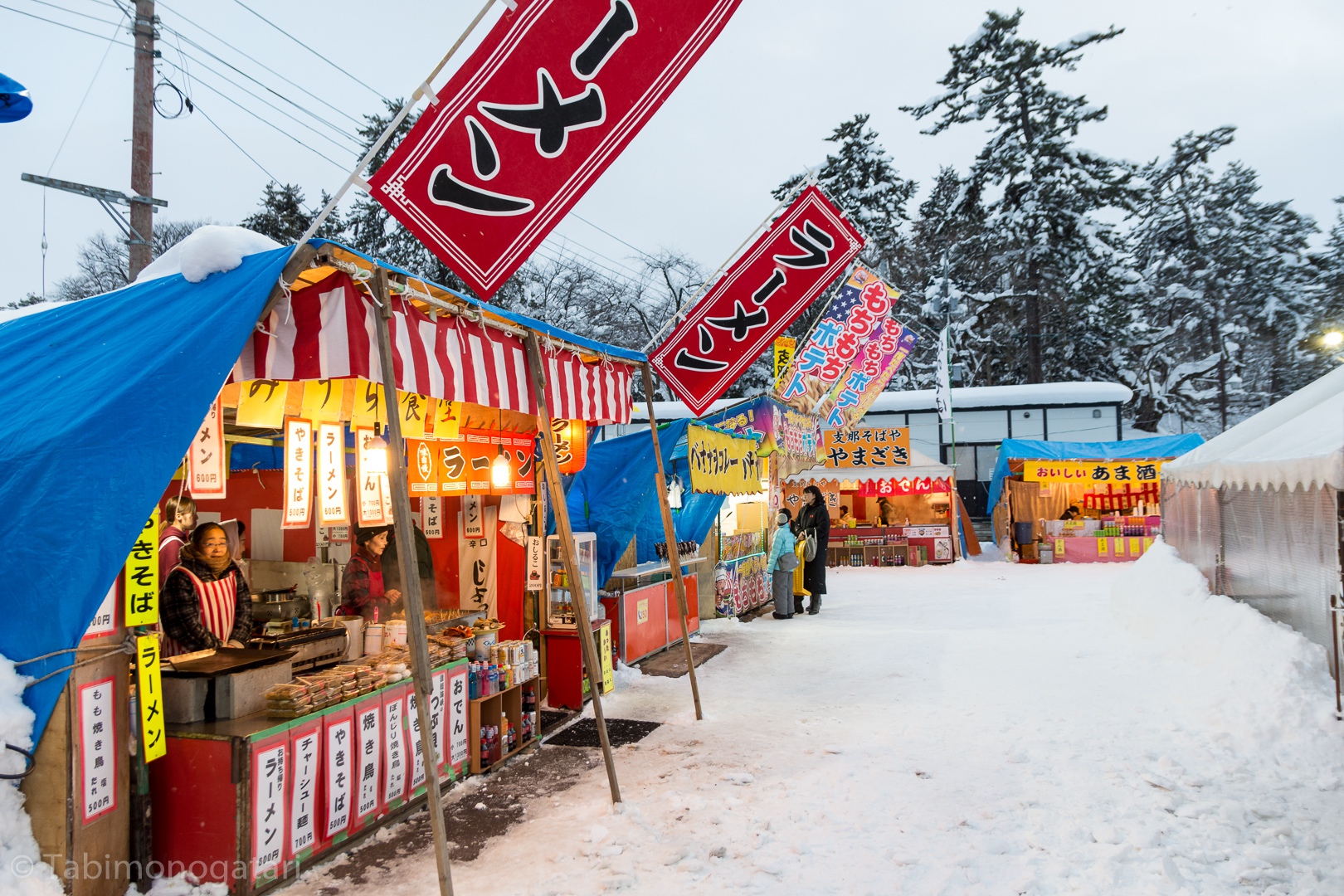 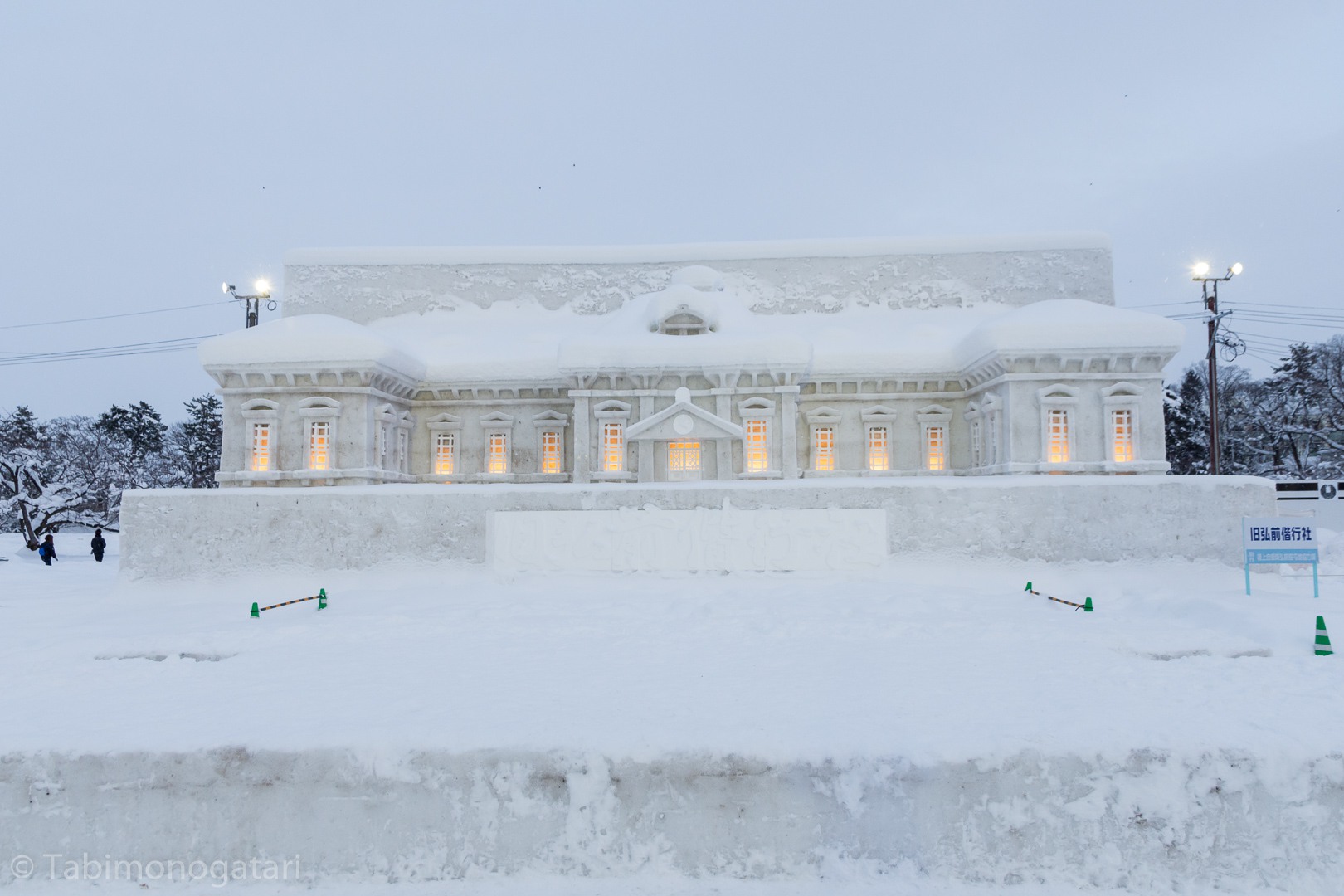 The park changed into a new kind of landscape as the illuminations turned on. Trees, snow sculptures and kamakura lanterns lit up and gave a beautiful backdrop. The castle was also illuminated and a reporter team from a TV station broadcasted the view. The snow fall became heavier, so I also tried to return to a warm place again. 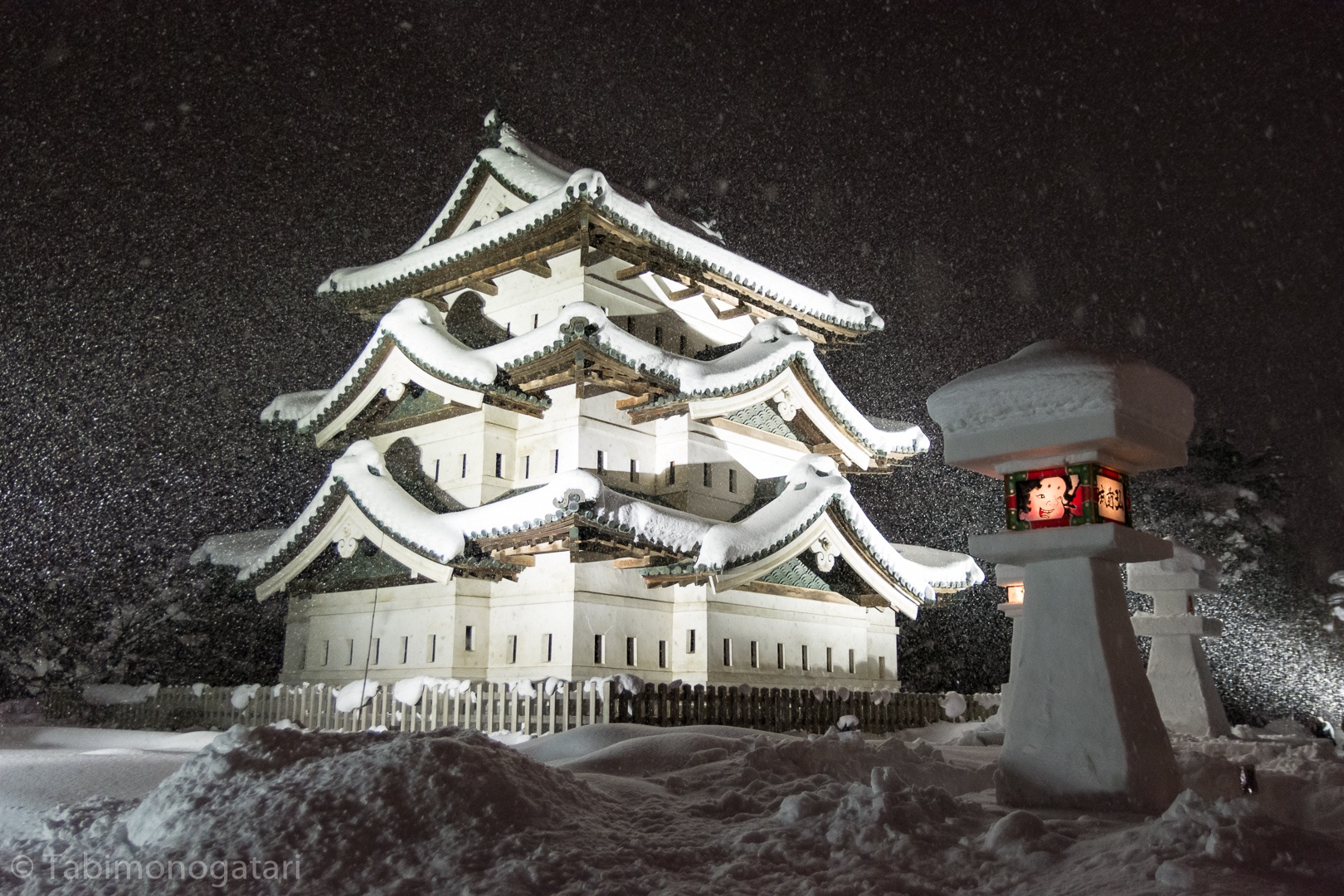 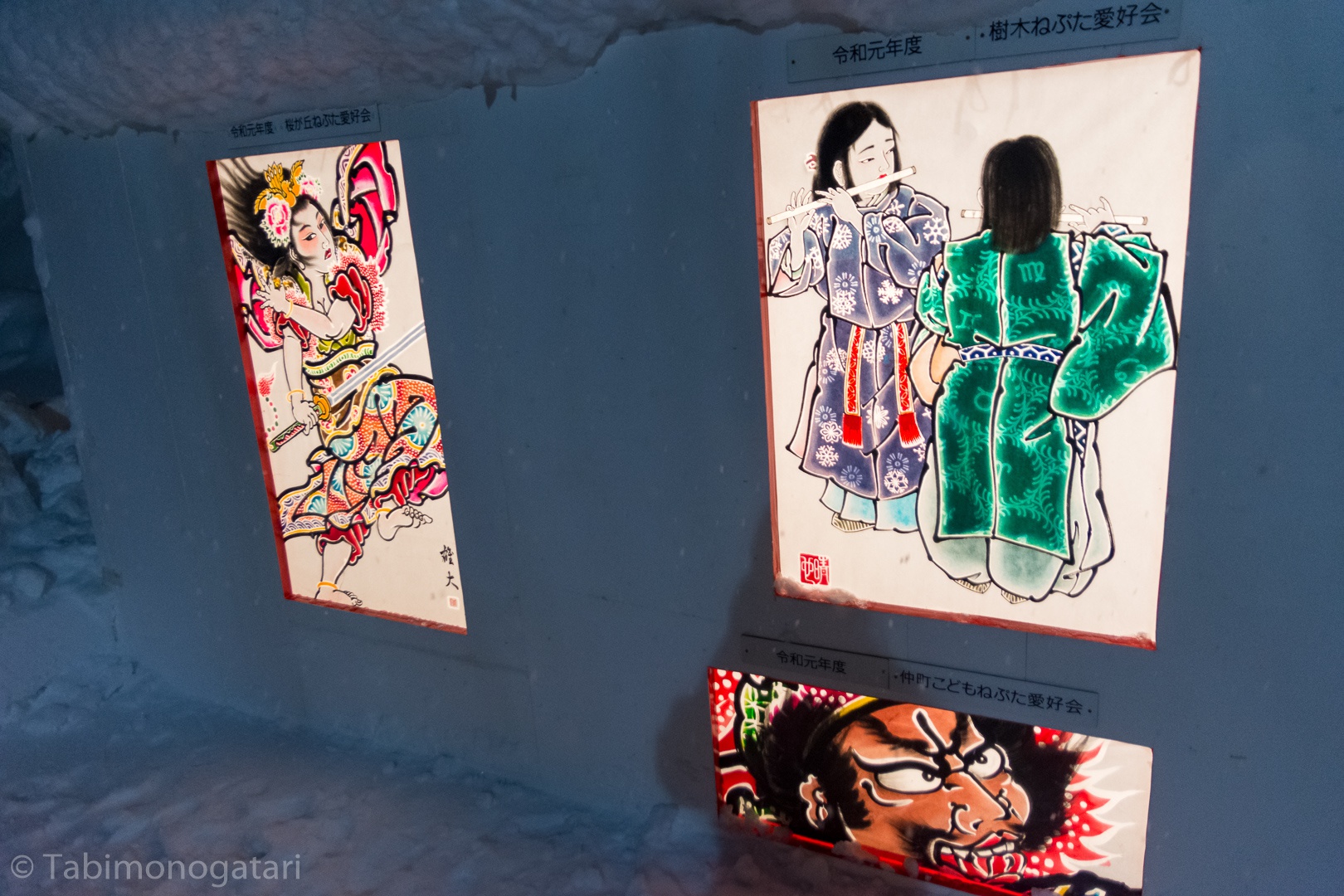 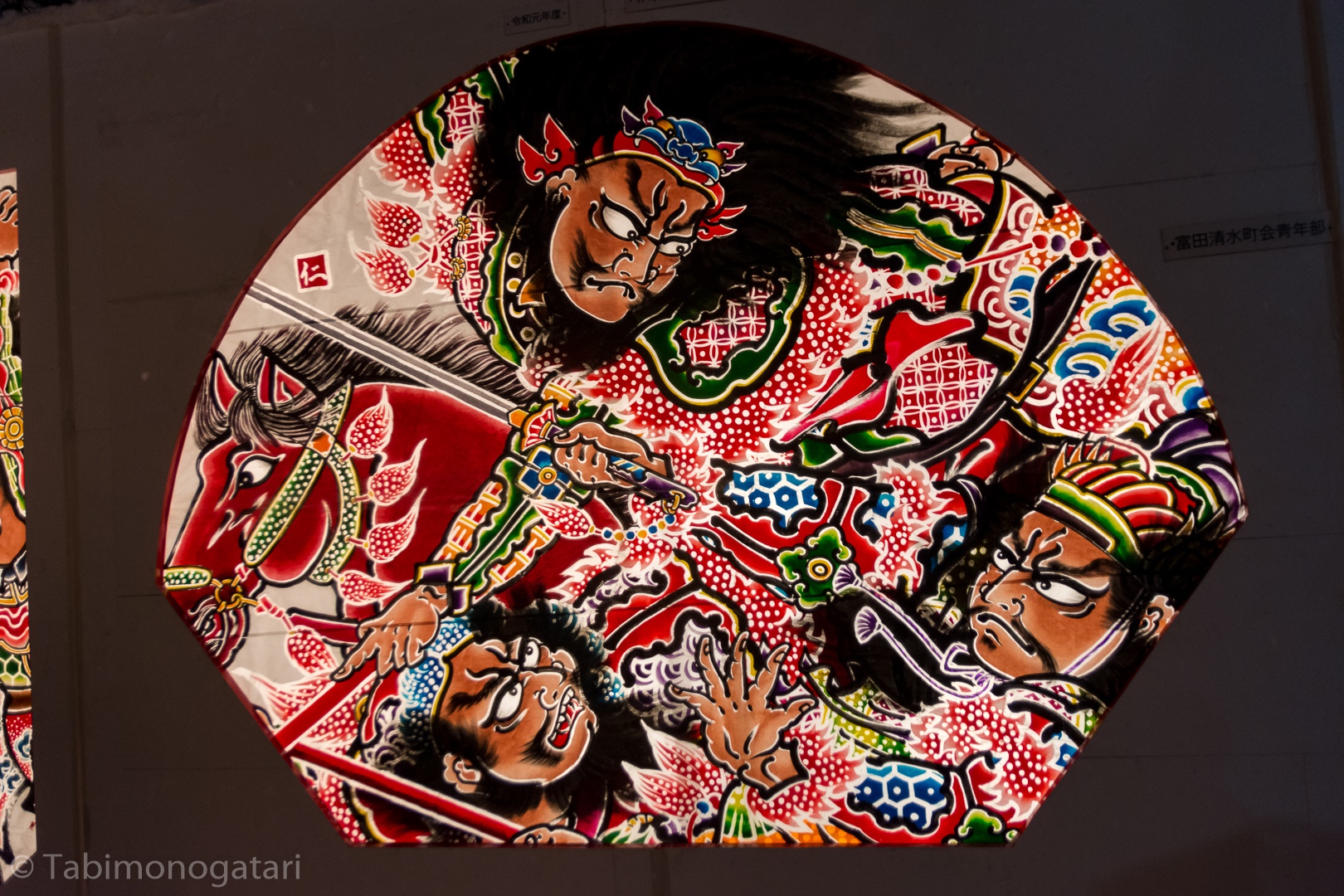 Before I could do that I had to see the famous night sakura illumination. The pink sakura over the castle grove are wonderful in spring and in winter, the city searched to replicate this scene by using light. Indeed, the snow-covered cherry blossom trees illuminated in pink remind me of hanami a bit. 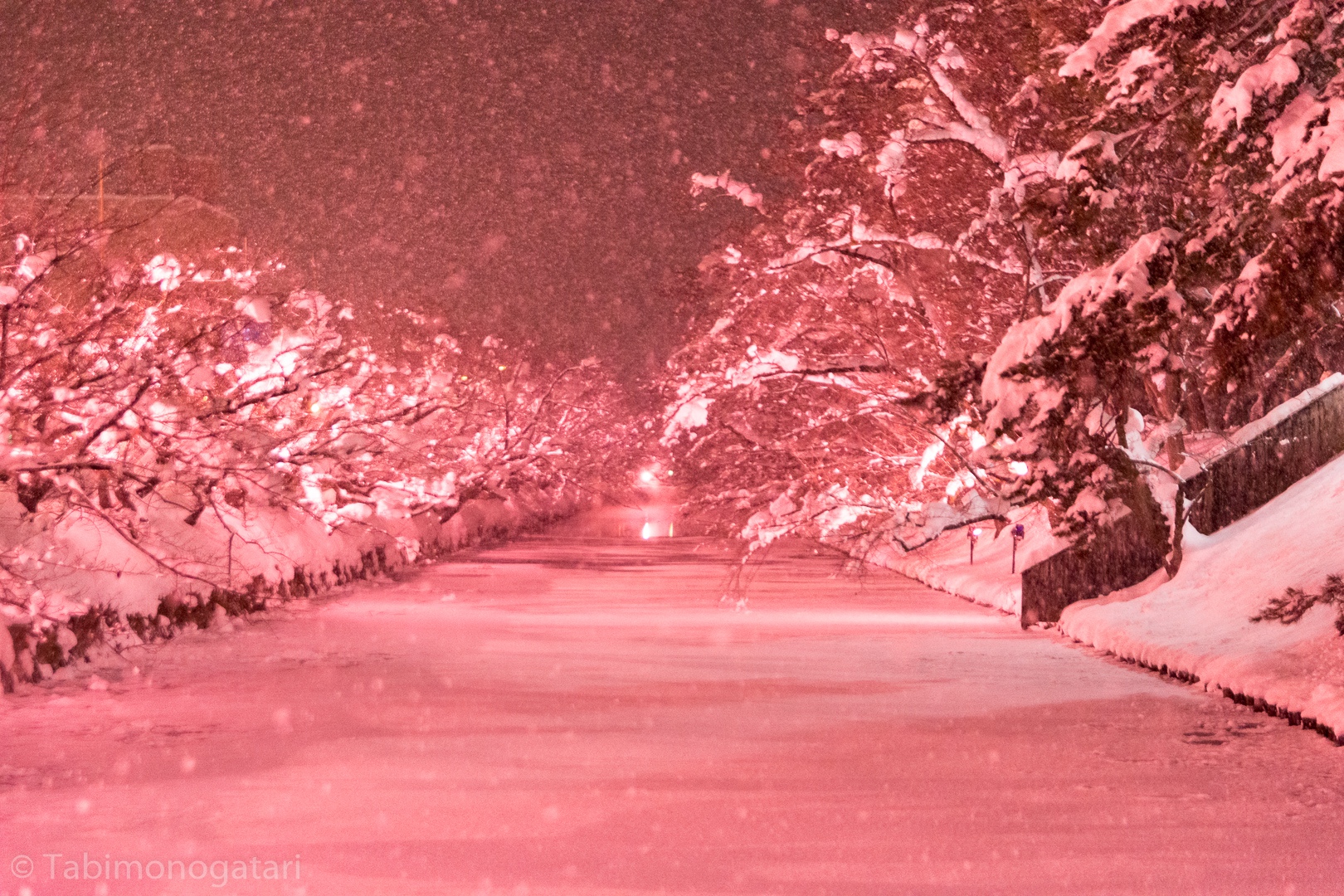 After that enjoyable stroll through the park I felt chilly. Taking a bath was the obvious choice, but first I went to eat something. The hotel I stayed at had several discount deals with nearby restaurants and after looking at one of them, I tried it out.

The izakaya was just around the corner and had a nice separated booth for each table group. The menu included different kind of seafood as well as typical izakaya staples. Thanks to the coupon I could choose to get fried scallops. Intrigued I ordered that, together with karaage and an apple sour (shochu, soda and apple juice). The scallops were a surprise. Soon after, the waitress placed a small grill on the table and placed four raw scallops on the grill. Then we waited until they opened up and their insides were tender. Finally the scallops were seasoned with soy sauce and could be enjoyed. The taste and texture were amazing. The karaage were also great, juicy and crispy. 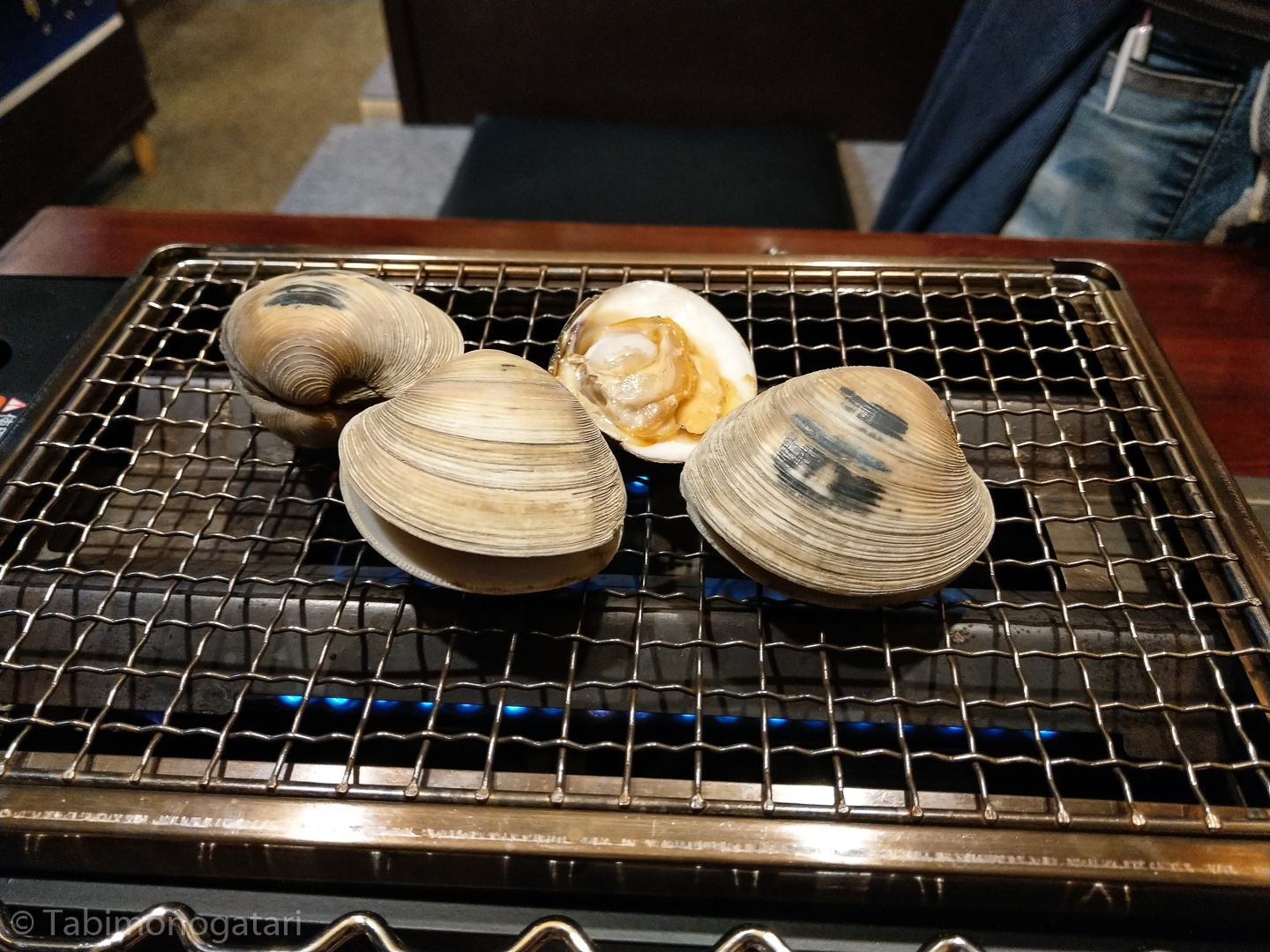 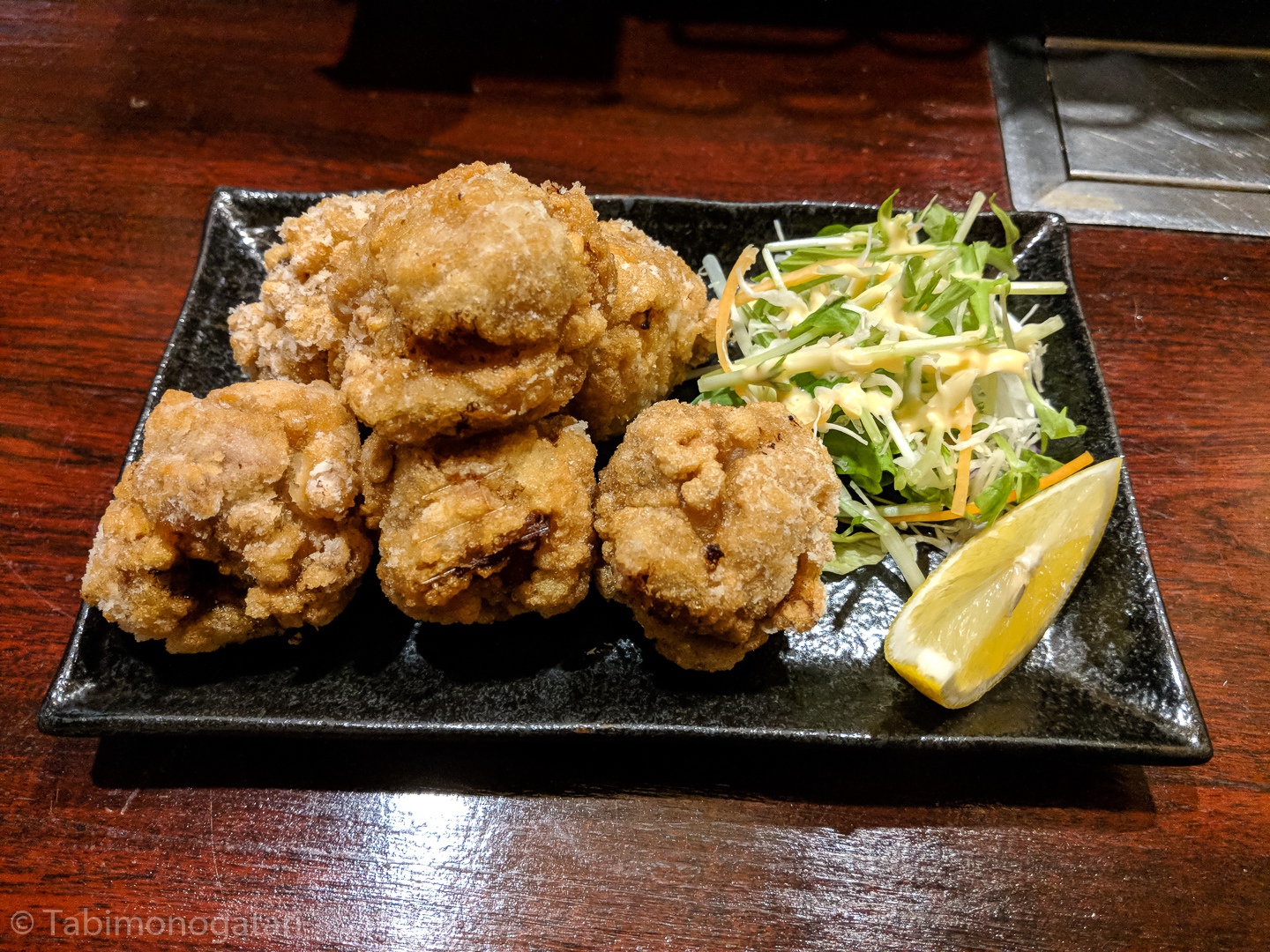 In the hotel I took a relaxing bath in the communal bath on the roof. In addition to the bath inside, there was a rotemburo (open air bath) with a tranquil atmosphere. Sitting outside in a hot spring bath while the snow is slowly falling down is the ultimate experience for me.

That relaxing bath warmed me up and improved the condition of my stressed feet. The hotel further offered a midnight ramen snack, that I did not leave alone. 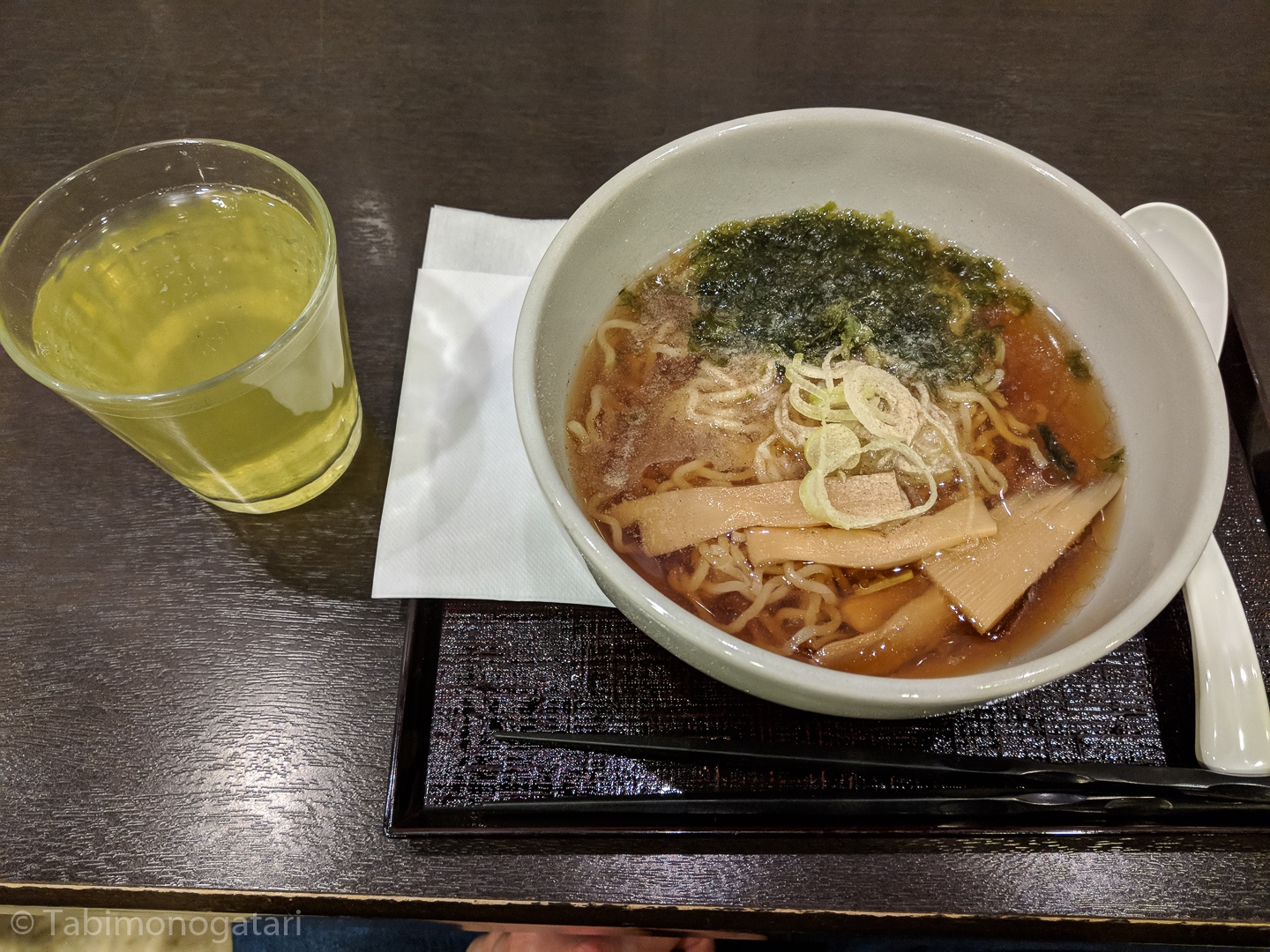 Tomorrow I needed to leave Hirosaki early again, so I went to bed as early as I could.