Today I traveled to Lake Kawaguchi near Mt. Fuji with two friends who are currently living in Tokyo. When travelling to see Mt. Fuji, most I assume will think of going to the Hakone area. Indeed, I also was there before since it is often mentioned as worth a visit (it is). This time I wanted to explore another side of the mountain (literally) which is also well accessible from Tokyo. Today we were going to Kawaguchiko in Yamanashi prefecture.

Both highway buses and JR connect to Kawaguchiko, and we have chosen JR for several reasons. Firstly, it is cheaper for me and secondly, the buses do not run in the evening after 8pm, while JR trains do.

We met at Kanda station and boarded the Special Express bound for Takao. After about an hour we arrived at the Western border of Tokyo (think about this for a moment). Here, Mt. Takao offers an accessible strip of nature for a day trip. We transferred here to another train to Otsuki in Yamanashi prefecture and then again into another train operated by Fujikyu. Until Otsuki the trip is covered by the JR pass. Close to here lies the testing track of the Maglev project, a future train line that will connect Tokyo and Nagoya in record time. Last year a public test run was conducted and the train will eventually reach 600 km/h. Today we did not have time to visit the site, but it remains on my list. 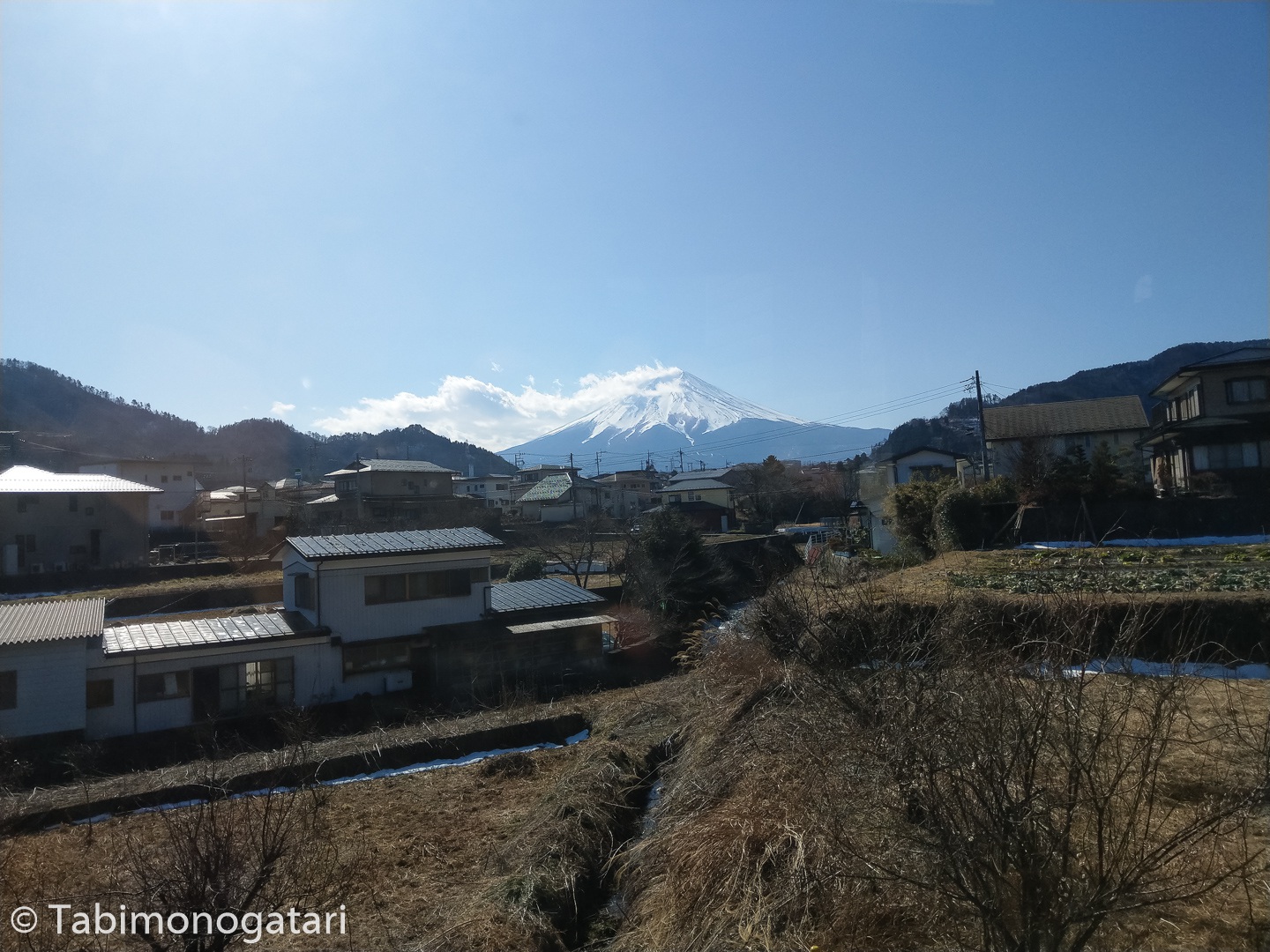 The last train we took was themed after the anime Naruto, as close to Kawaguchiko lies the noteworthy themepark Fuji Q. This was not our goal for today, but we took a break at Shimoyoshida station. 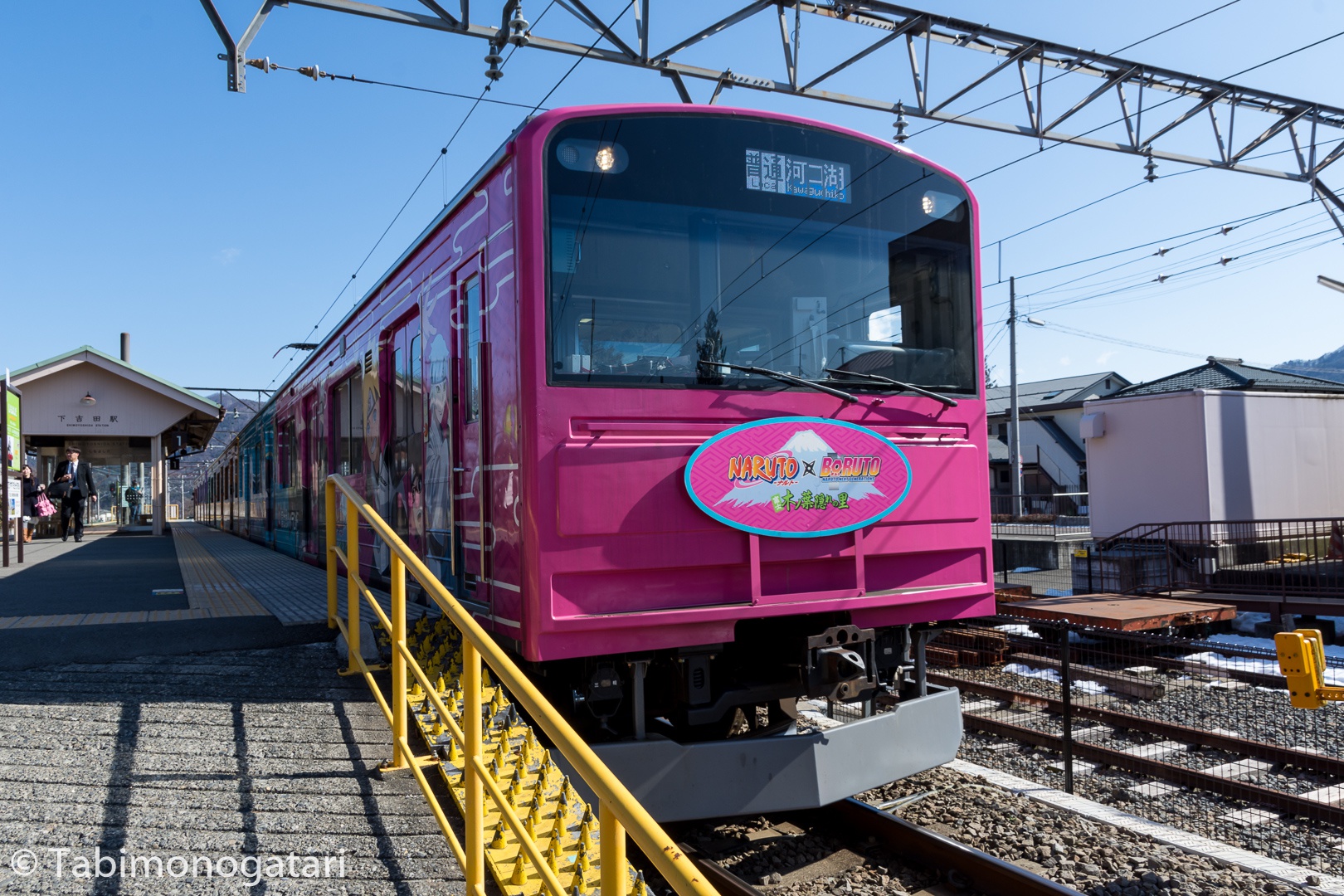 Now we were quite close to Fuji-san and were lucky with the weather. Just a thin layer of clouds covered a portion of the peak of the mountain, which has the habit of hiding behind clouds most of the time, especially in summer. In the town we took a few photos before climbing to our real goal, the Chureito pagoda. 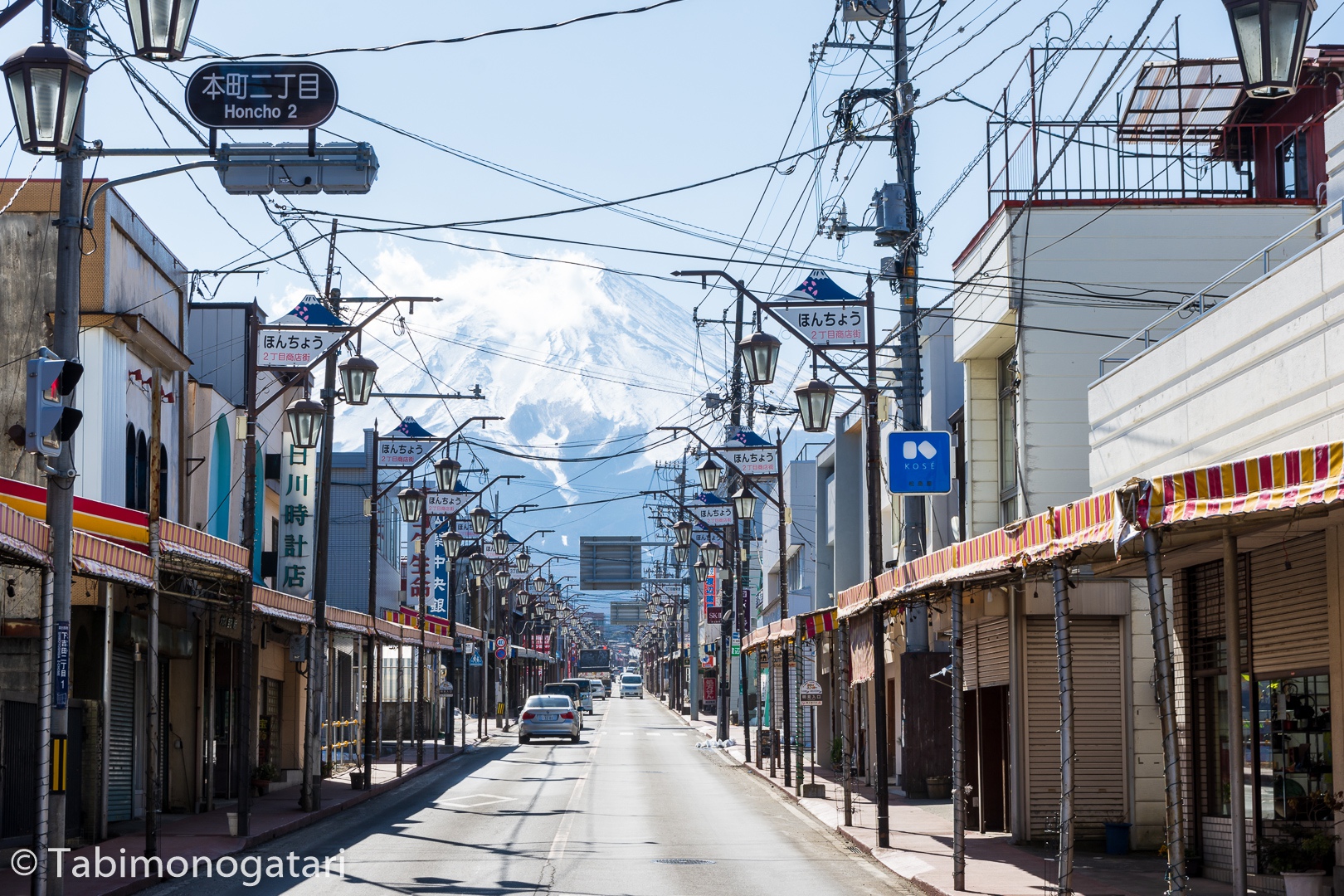 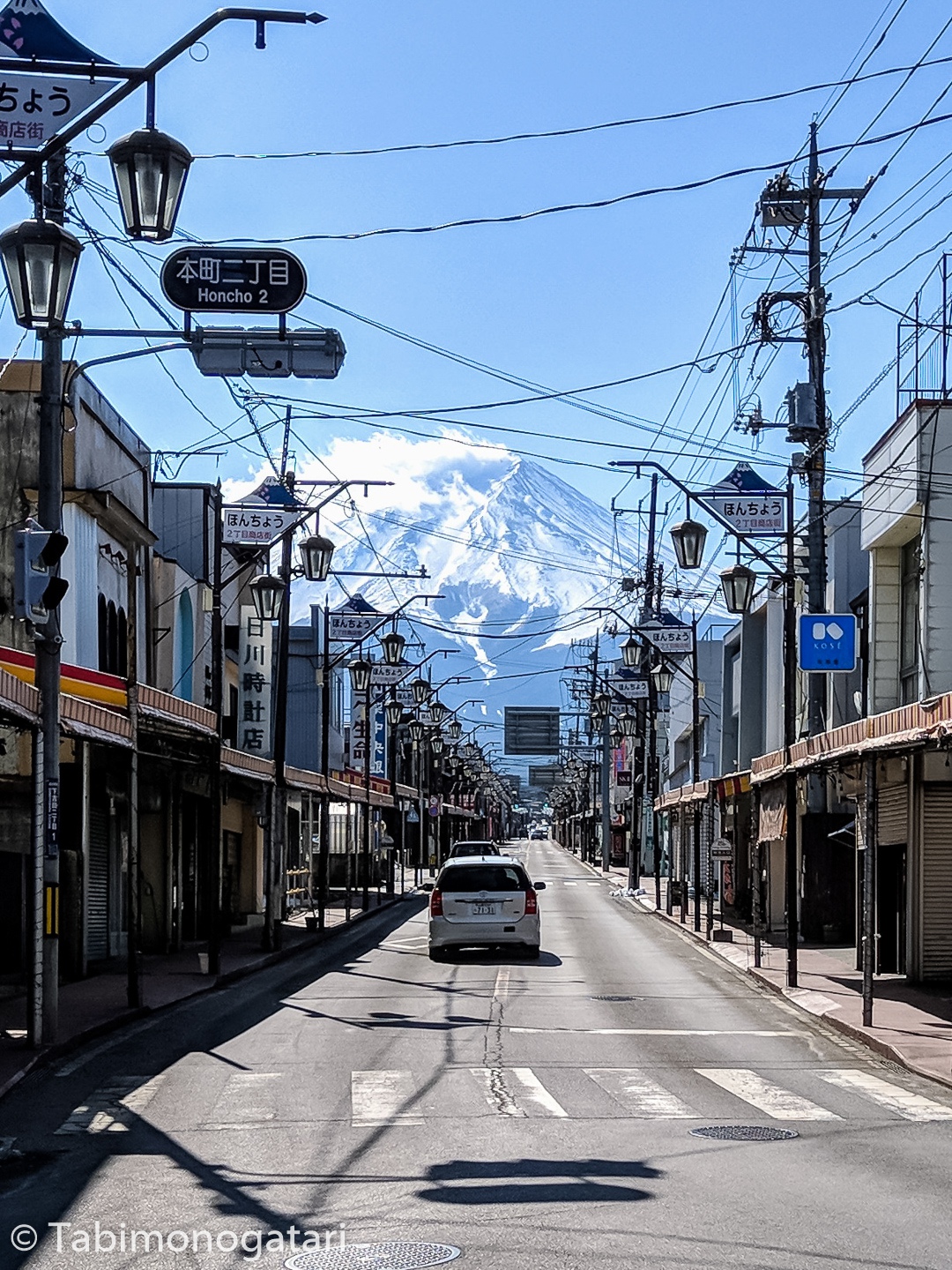 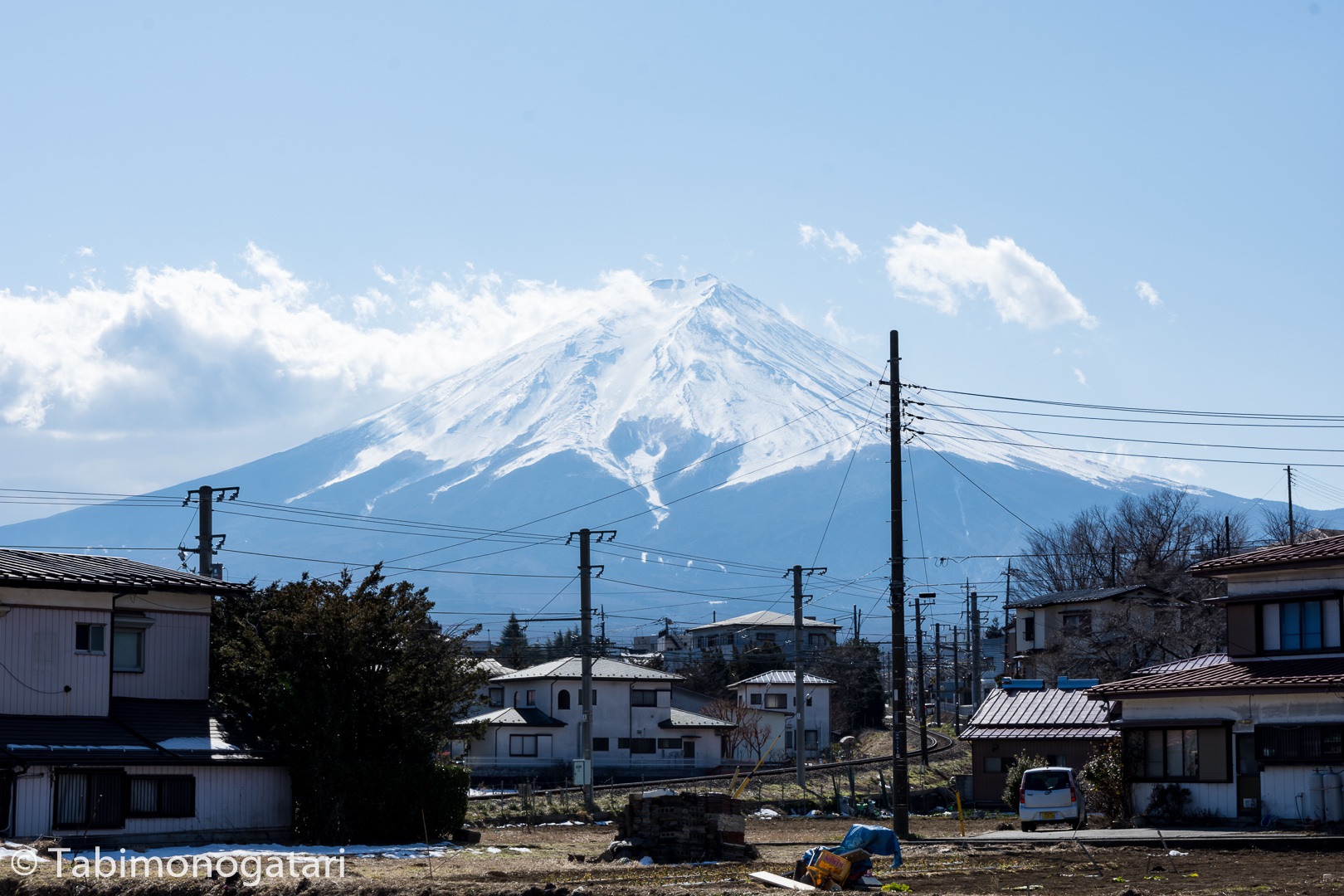 The view over the pagoda and Mt. Fuji is quite famous, it is on the cover of my Lonely Planet travel guide, too. A paved trail leads up to the viewpoint and while the climb is steep, it can be done within half an hour. 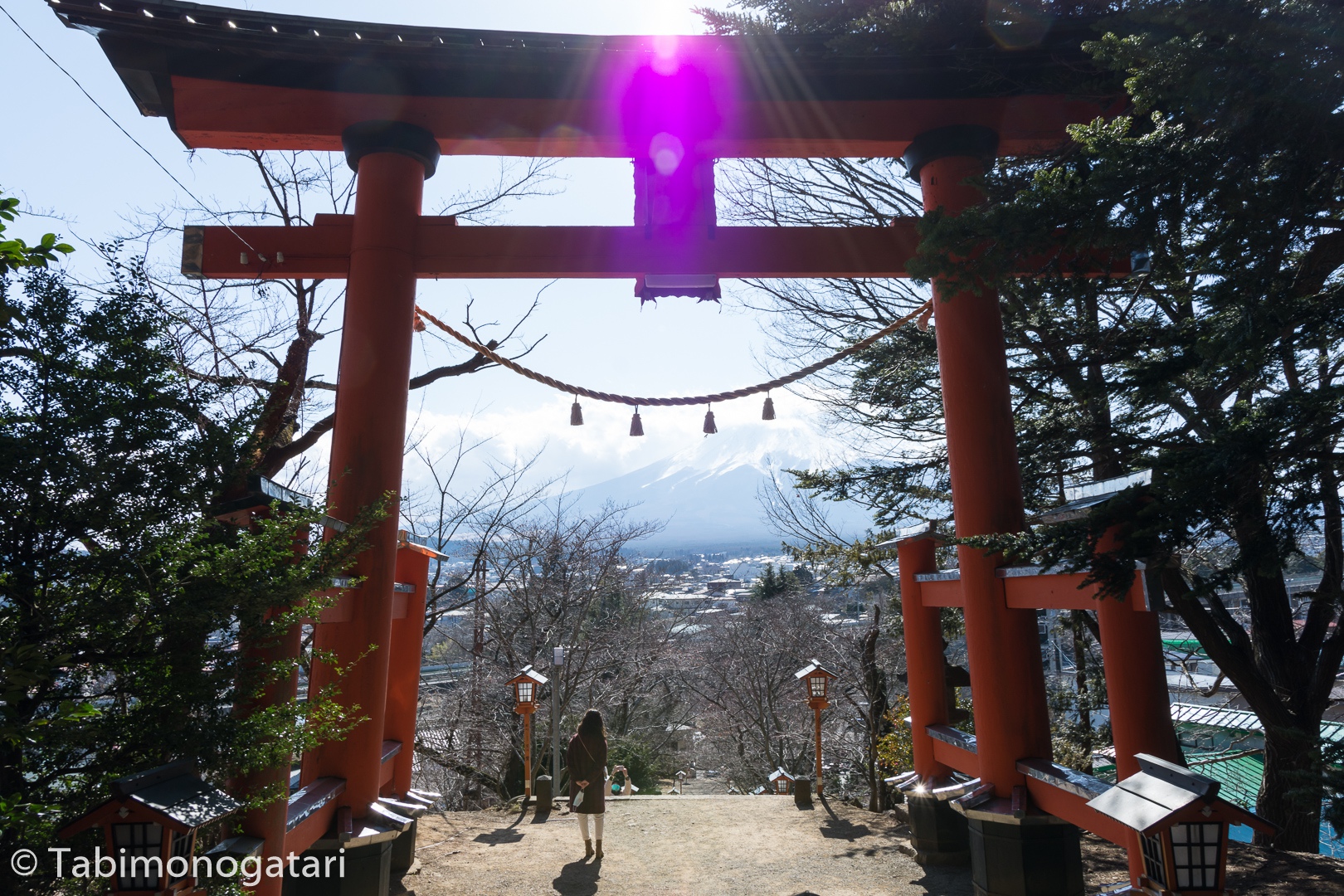 By the time we made it, more clouds began to gather and now the peak was already covered. Sadly, the situation only got worse over the course of the day so we could not see the peak anymore. Still, the silhouette of the snow-covered mountain is impressive. Even though we are still quite far away from it, it stretches out far. 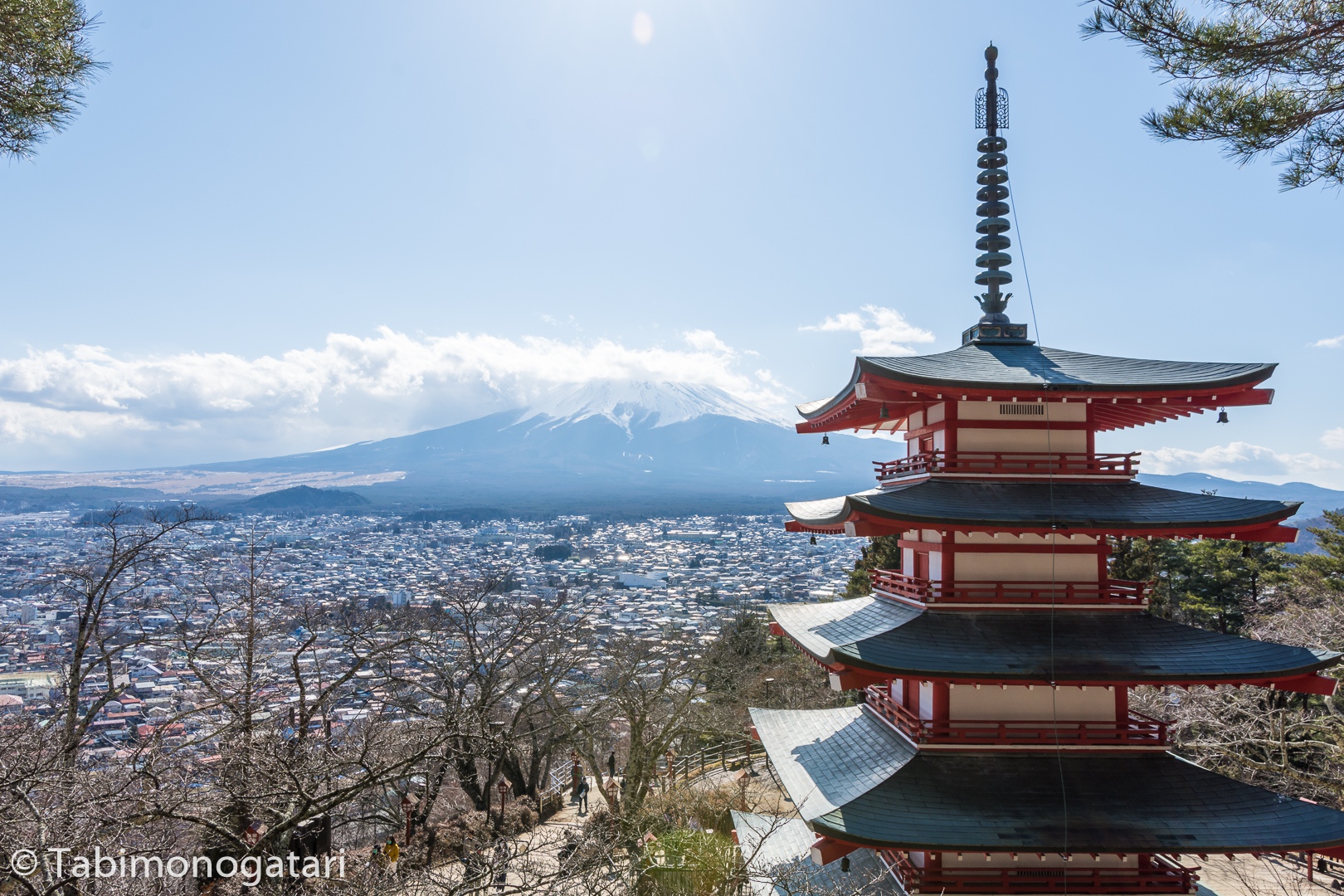 Back at the station we covered the rest of the journey to Kawaguchiko (city). Just opposite of the station, we enjoyed lunch at a local chain serving hôtô, an udon hot pot dish from Yamanashi. 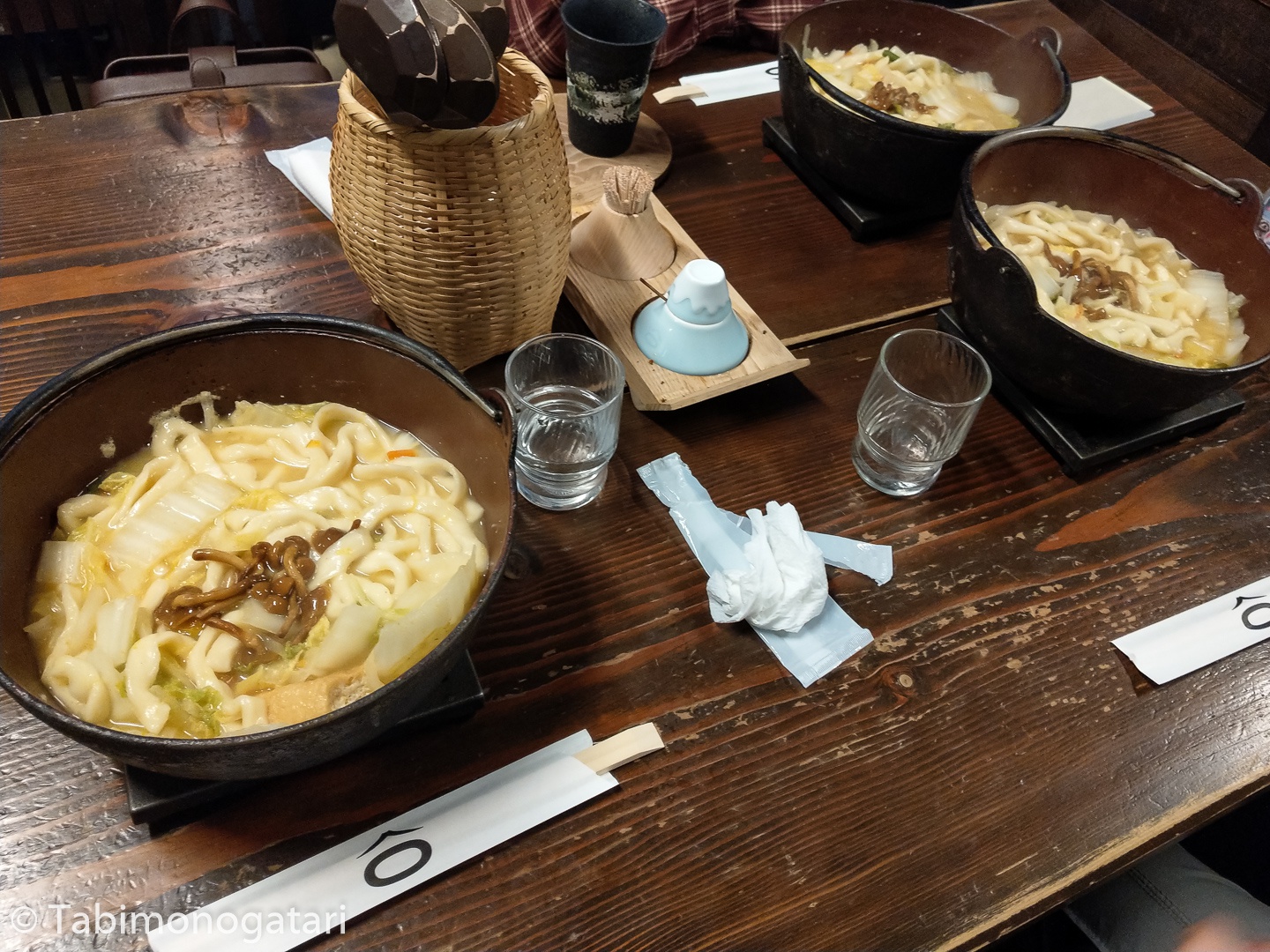 With new energy we circled parts of the lake until we arrived at the best angle for a photo of the lake and the mountain. A crowd of avid photographers had gathered here as well, waiting for the night to take photos of the firework display. That is why we decided to come today, too. 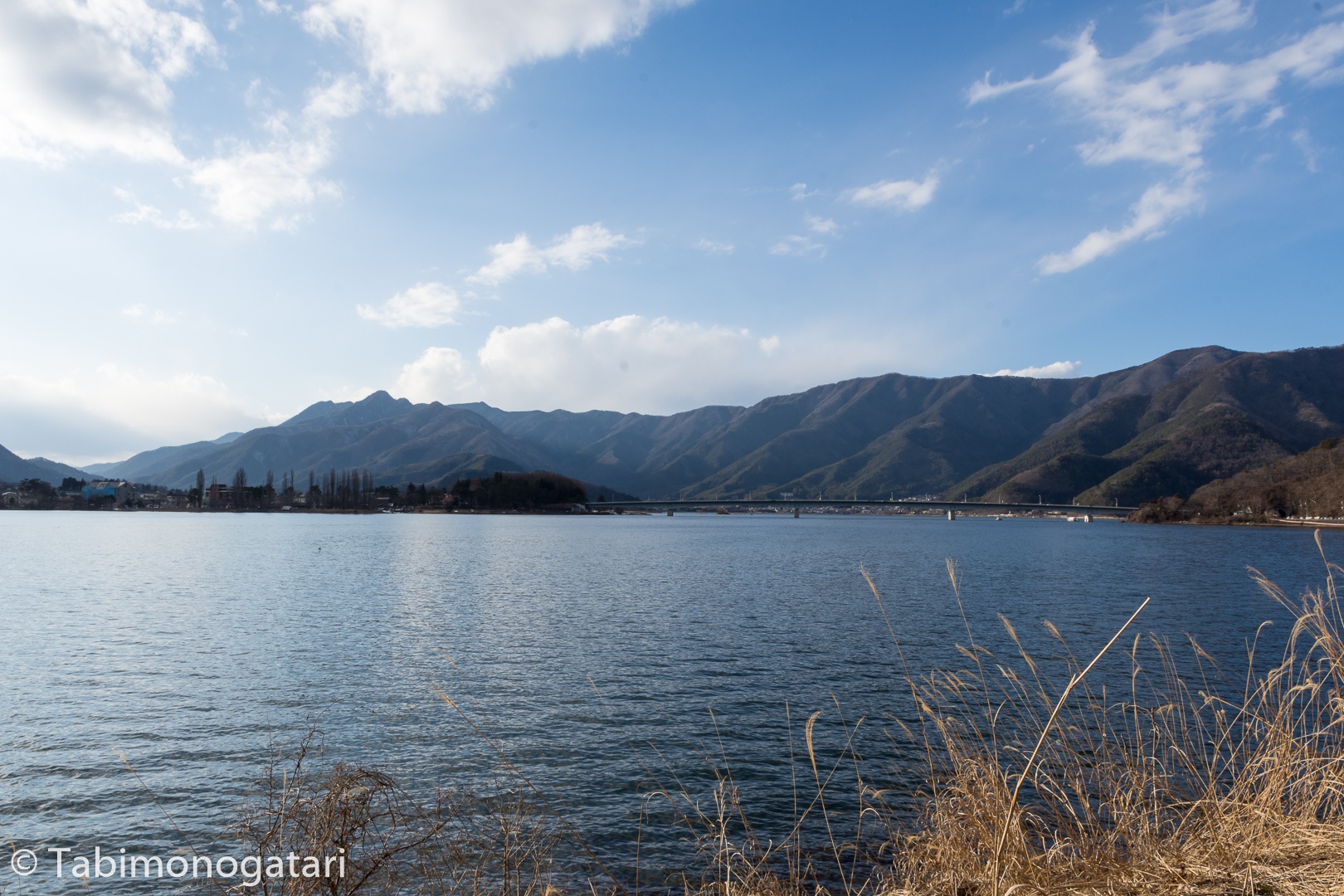 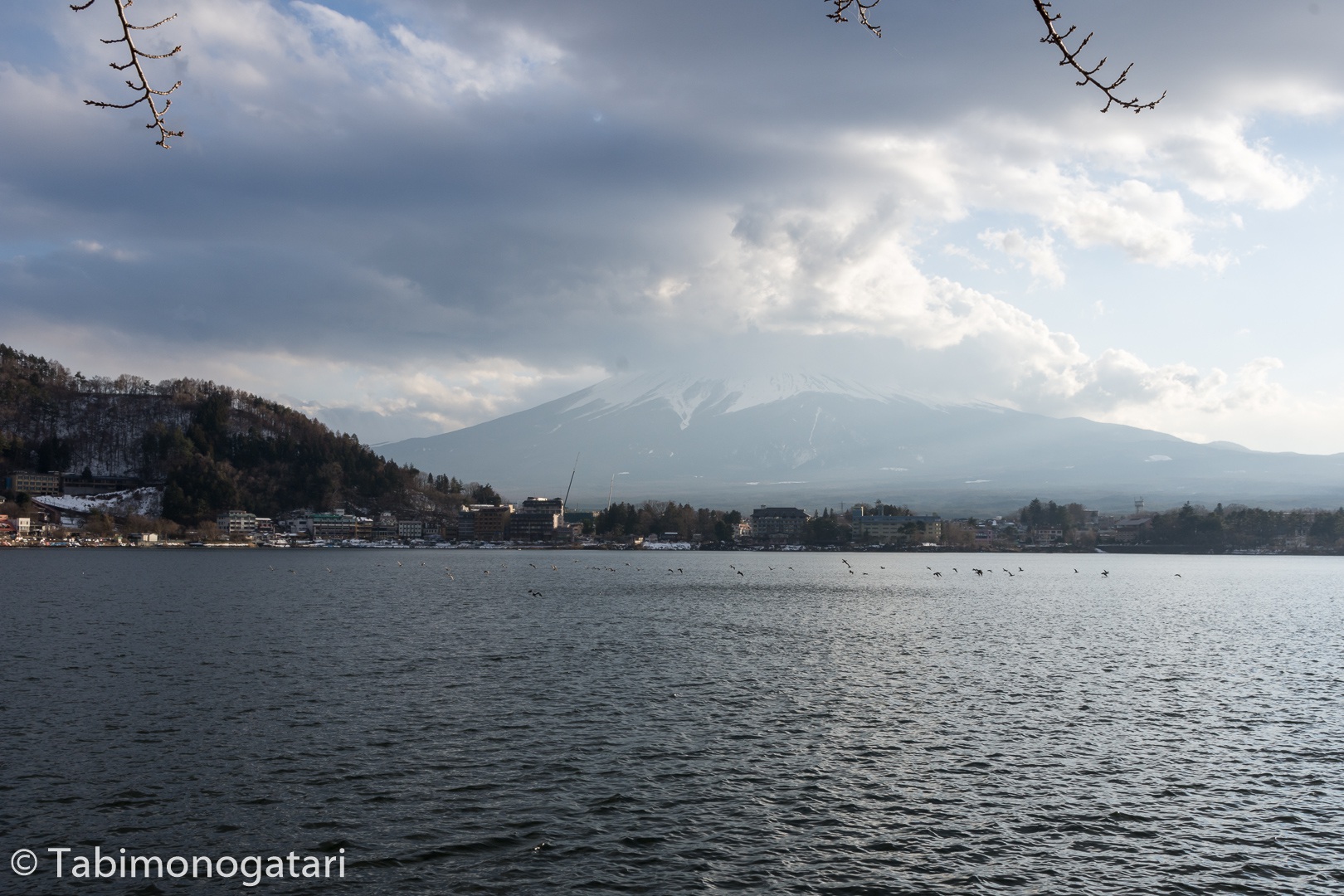 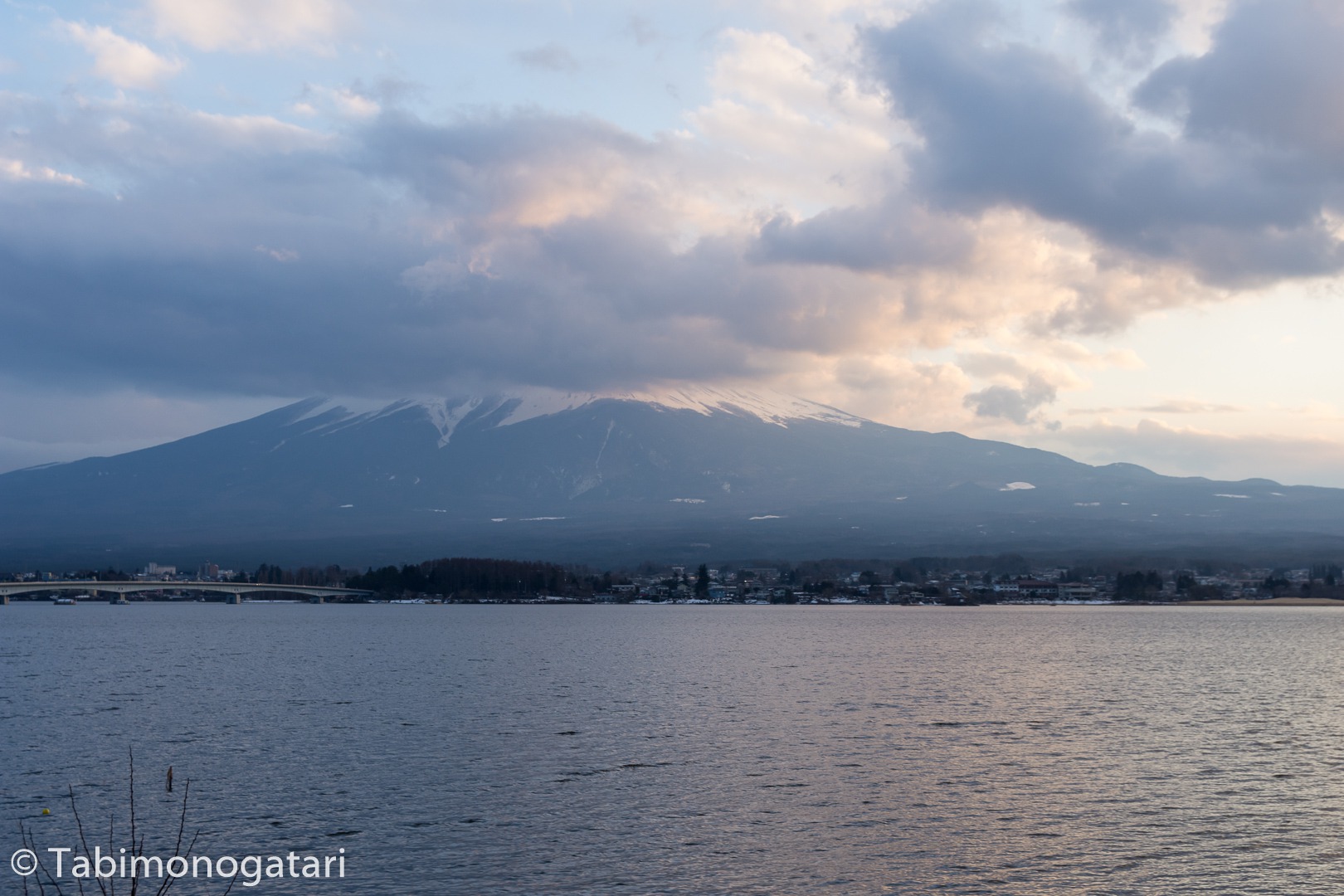 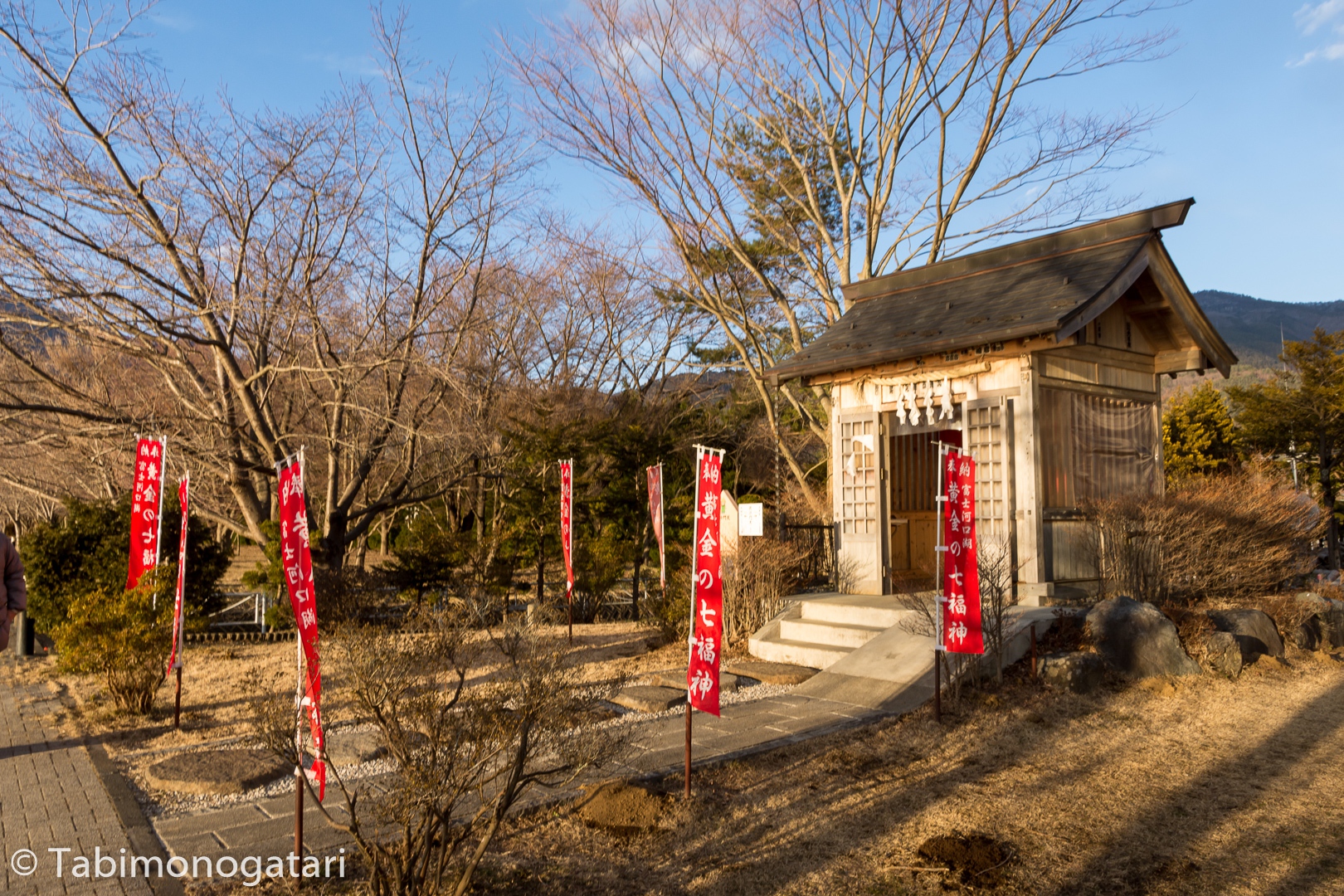 When the sun set we returned to the city center by bus and started to look for something to eat before the fireworks would start at 8. We spontaneously found a small Izakaya specializing in oden where we just fitted in, there were only eight spots around the bar. What I really like is when the locals are open minded and start a conversation. We had a great time here talking in Japanese about various topics. 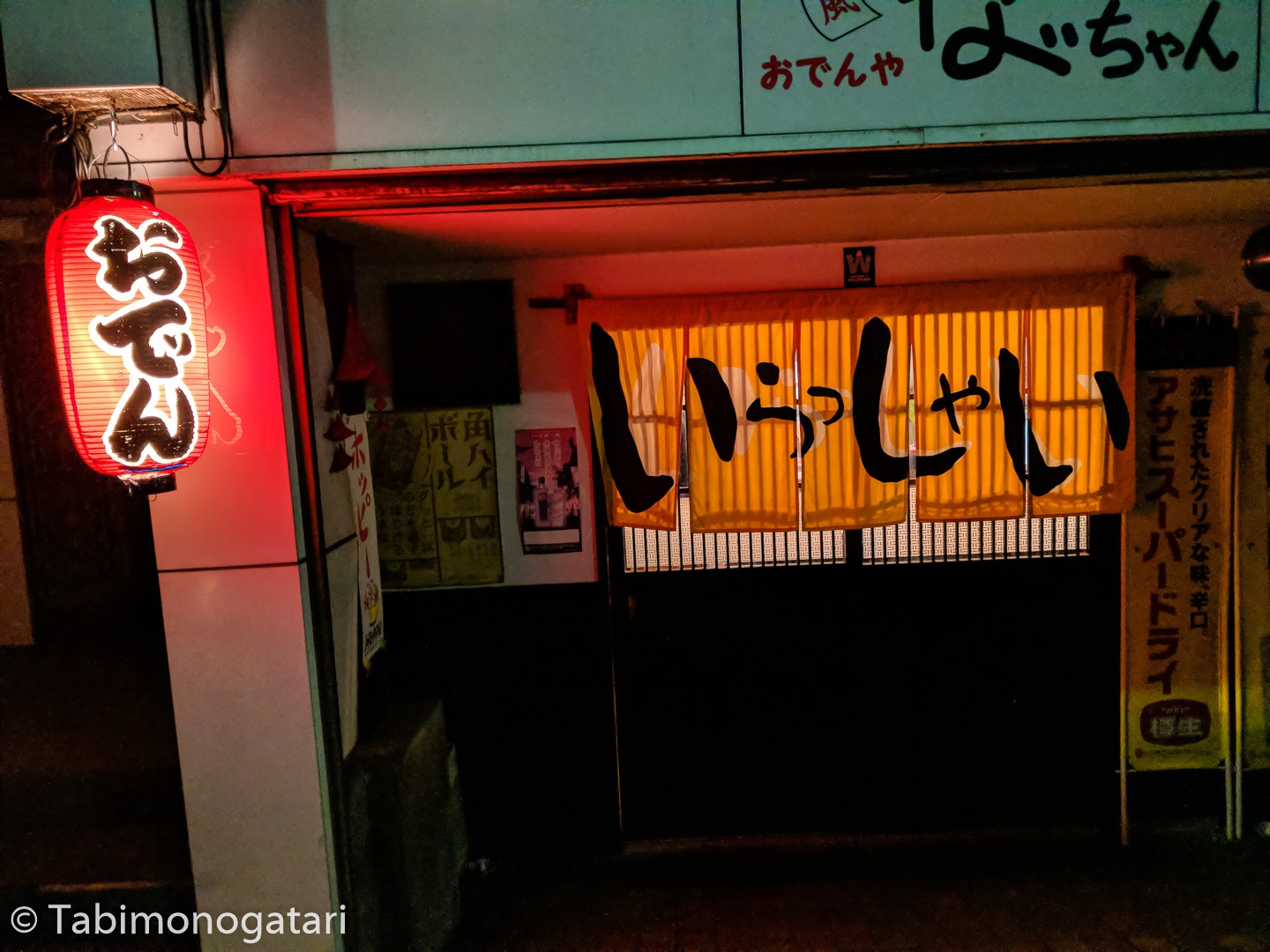 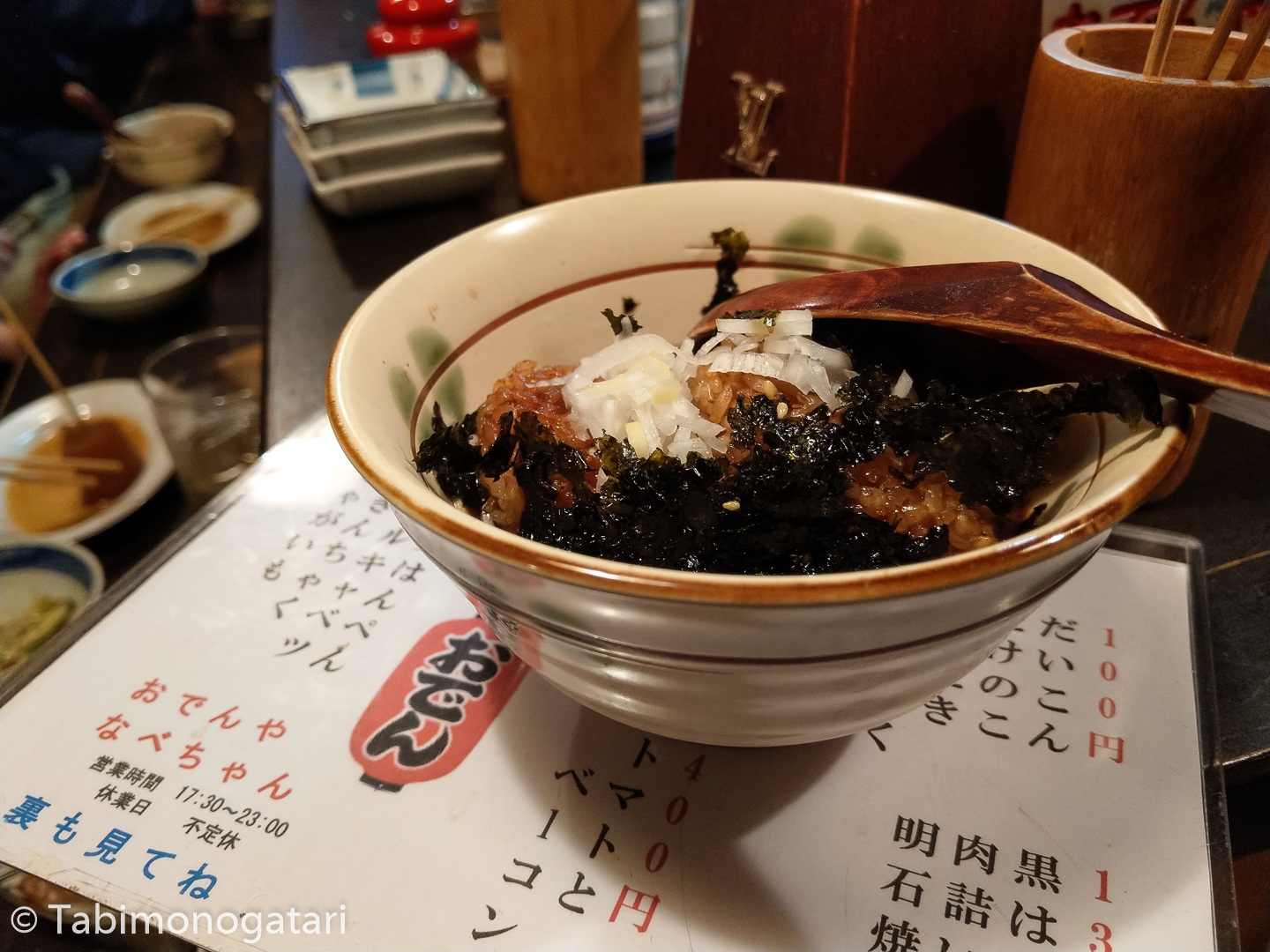 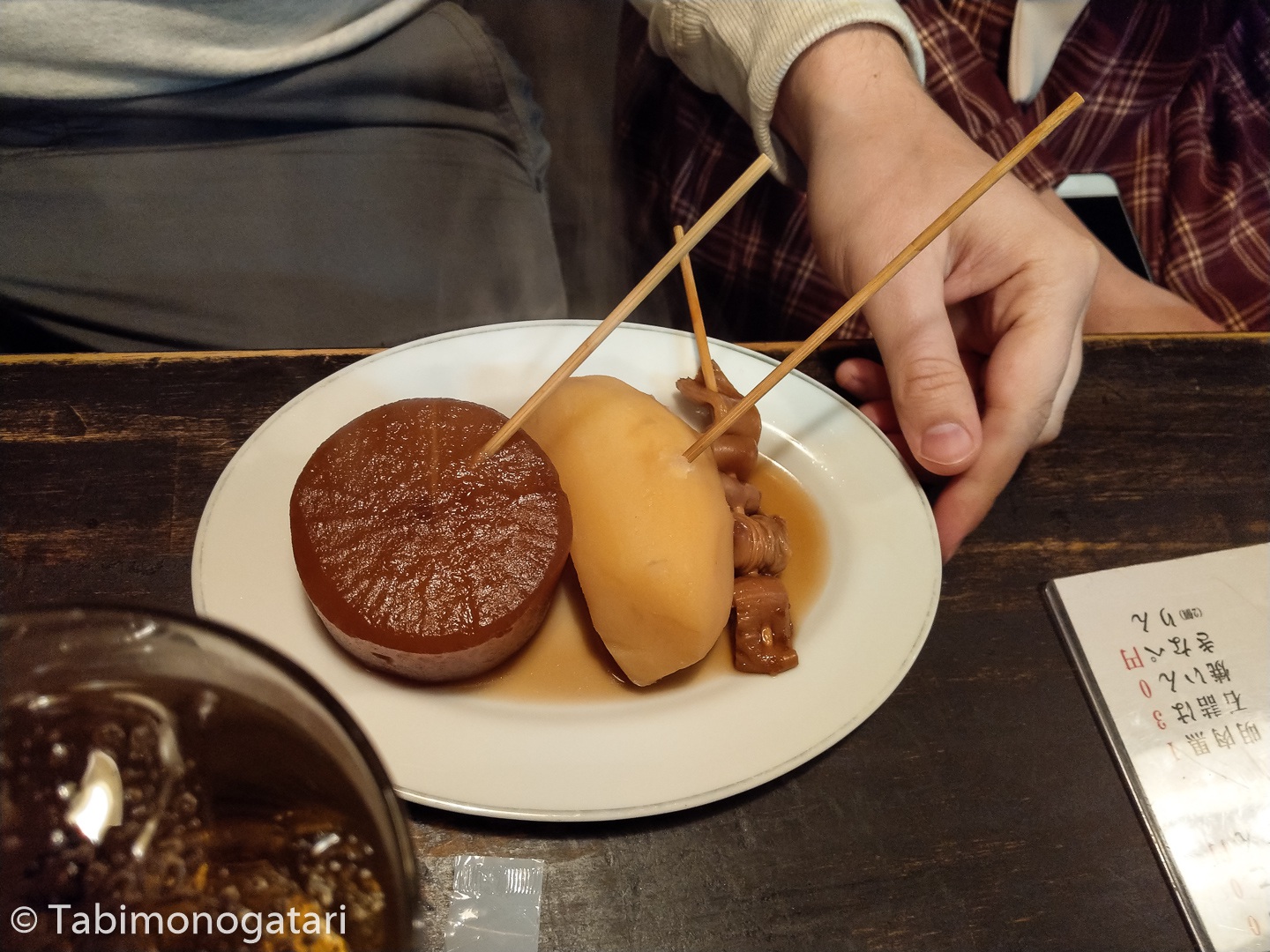 When we were about to leave, the master recommended a good viewing spot to us, and surely, it was way better than at the lakeside. From an elevated parking lot we saw the lake and the fireworks clearly. 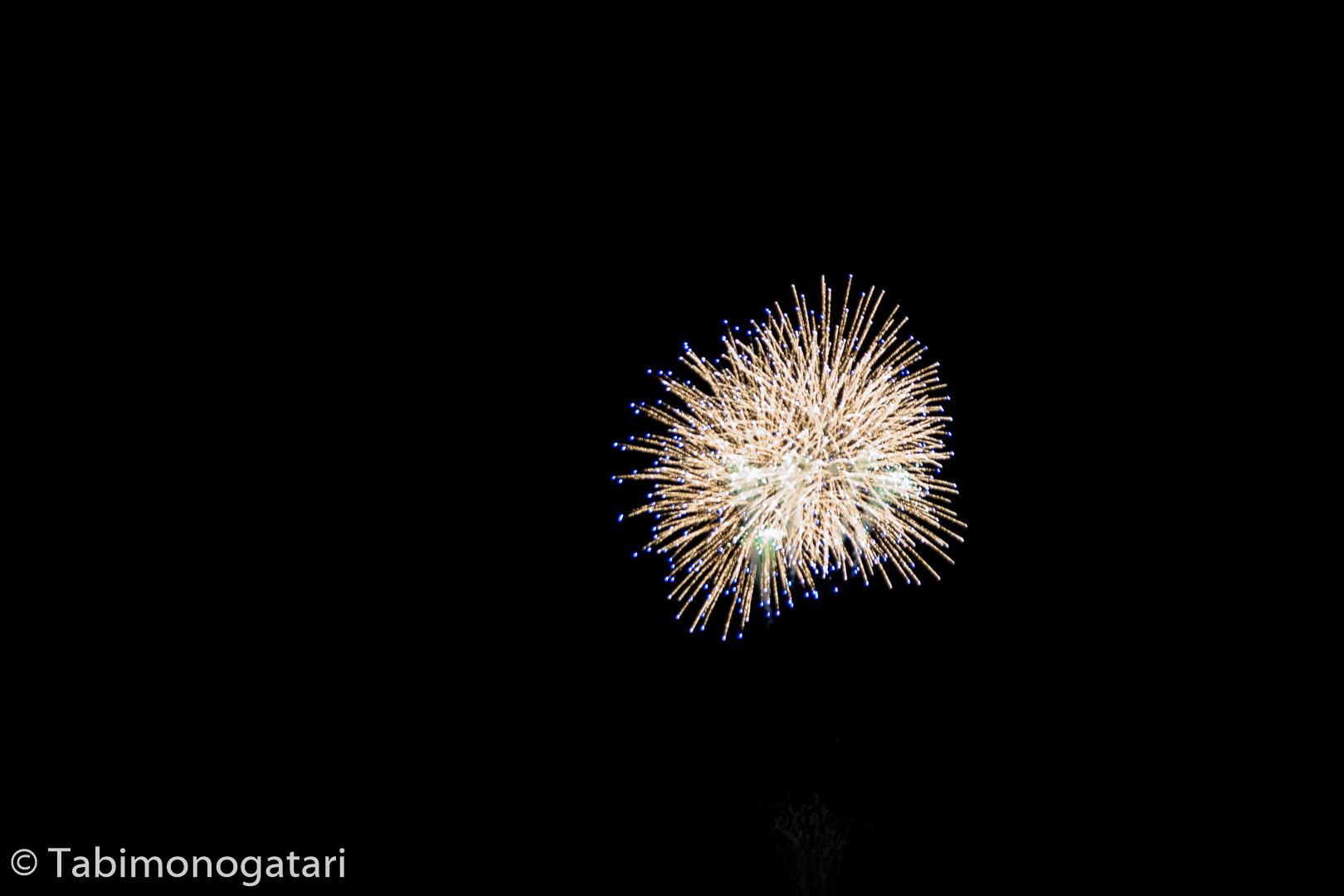 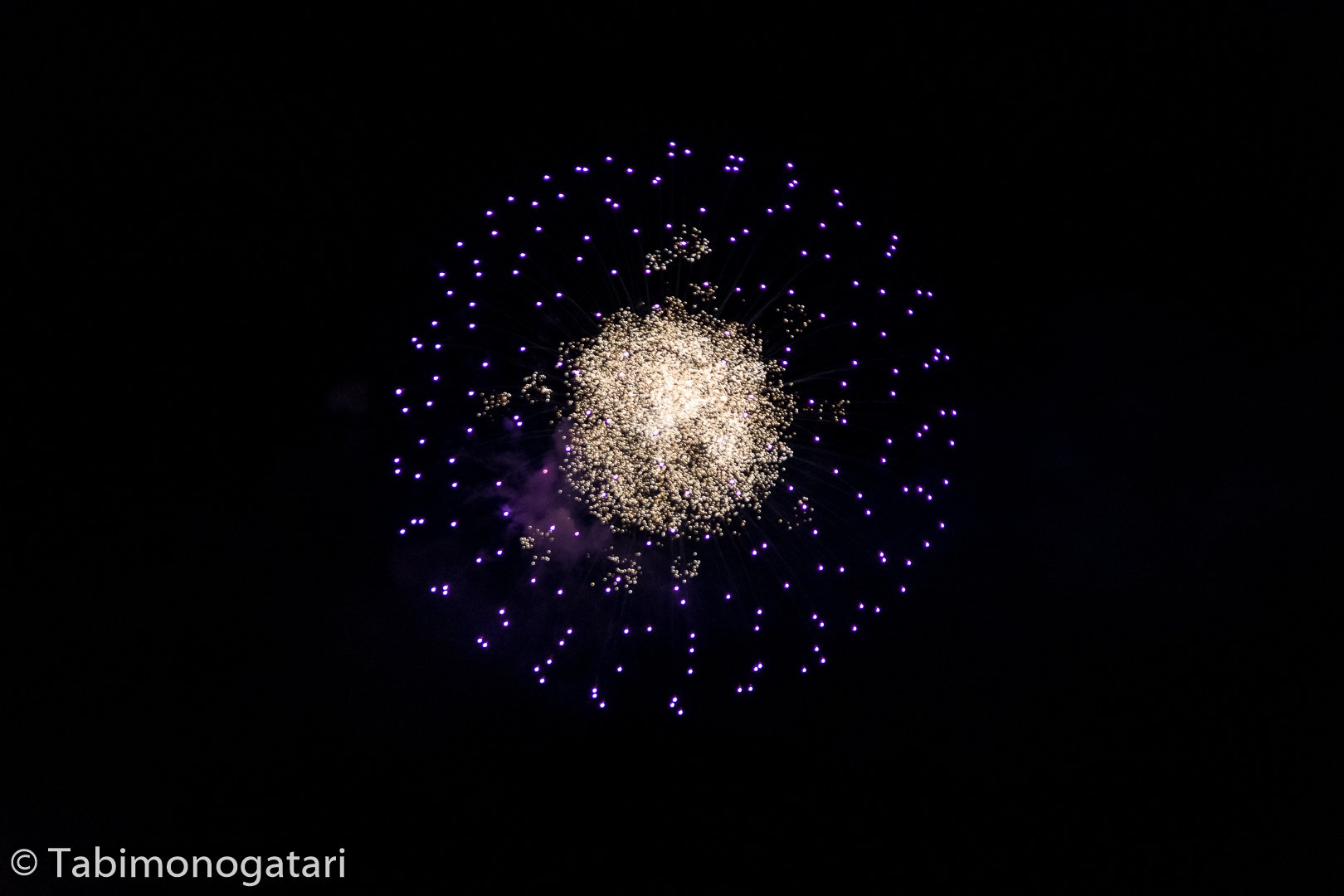 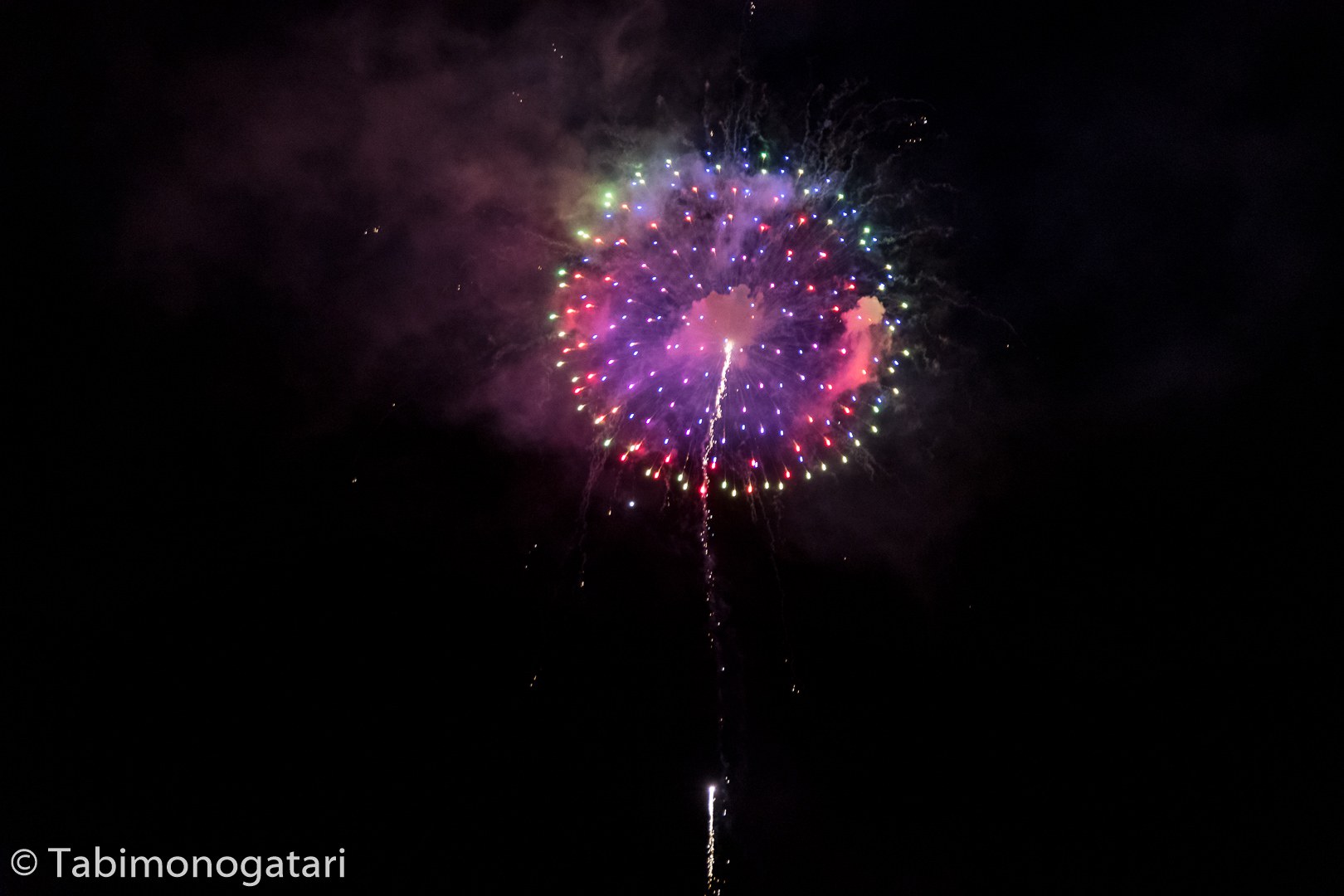 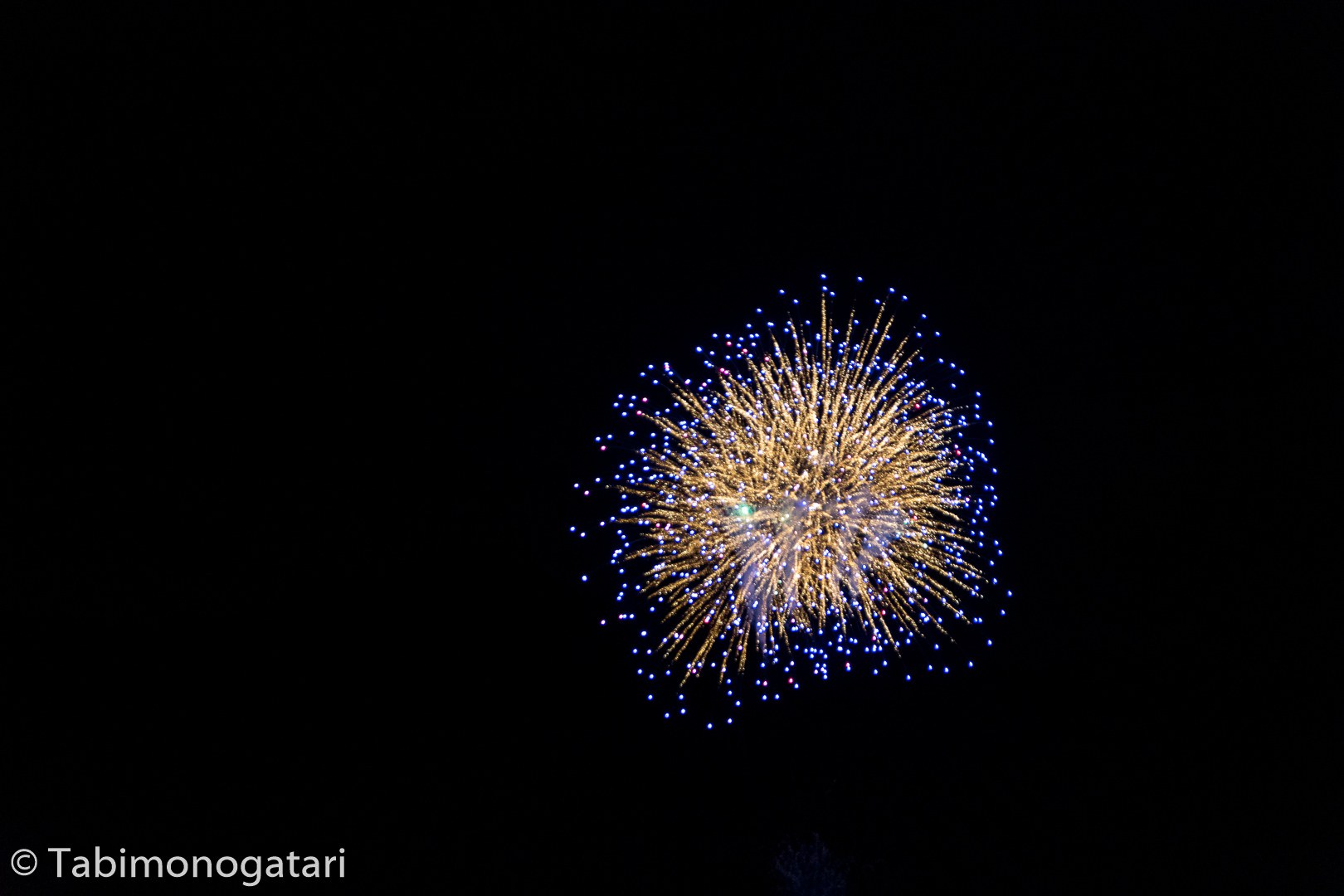 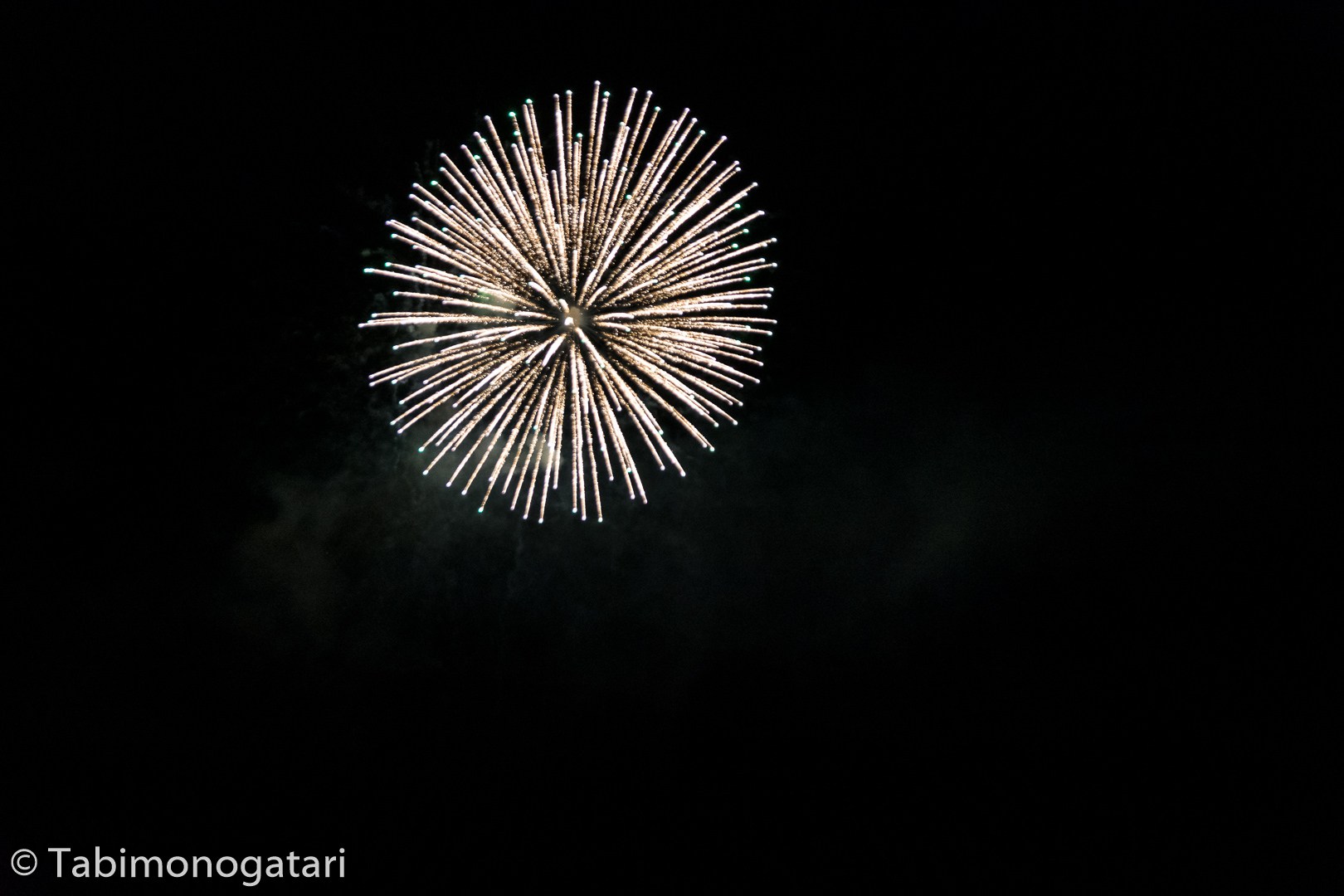 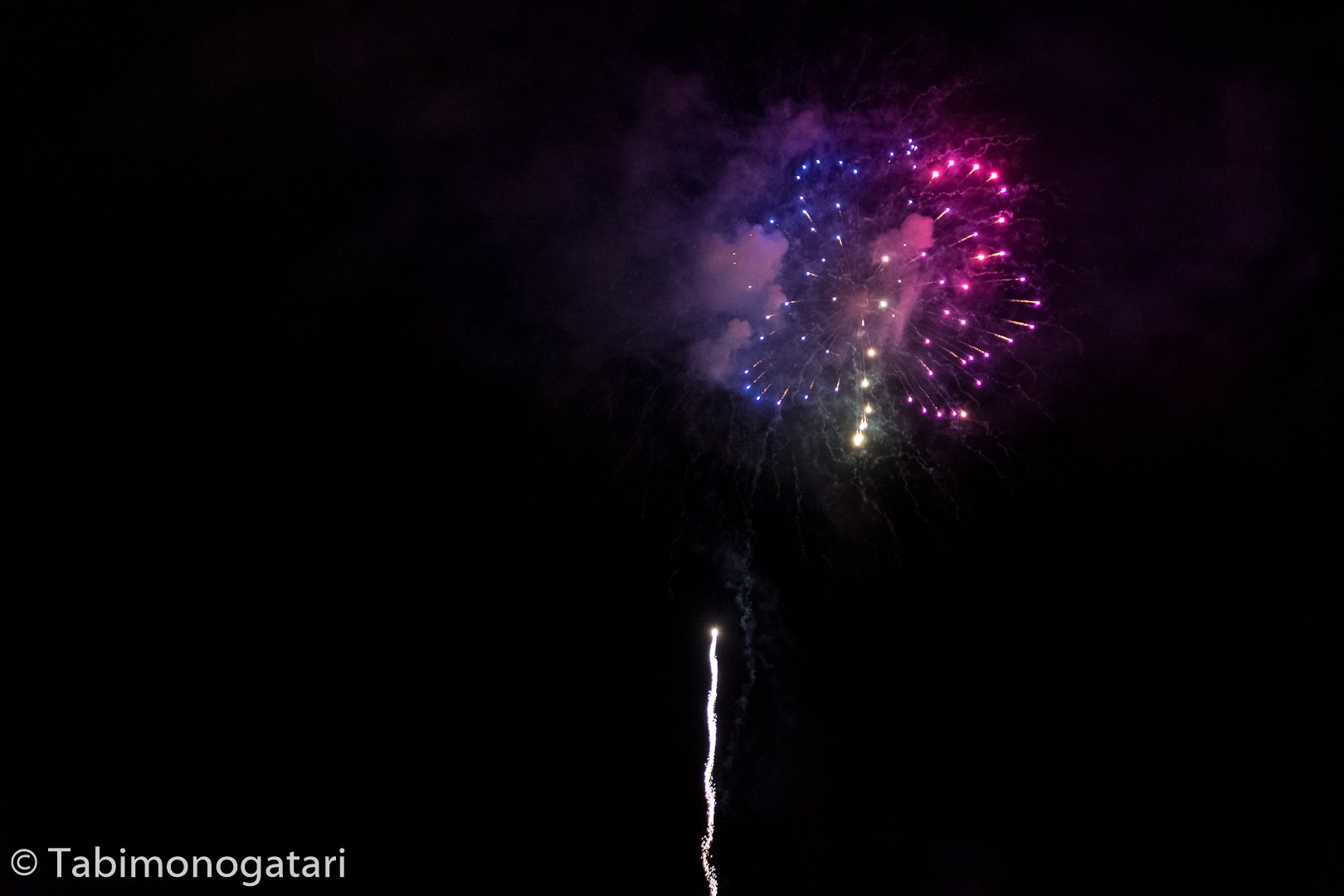 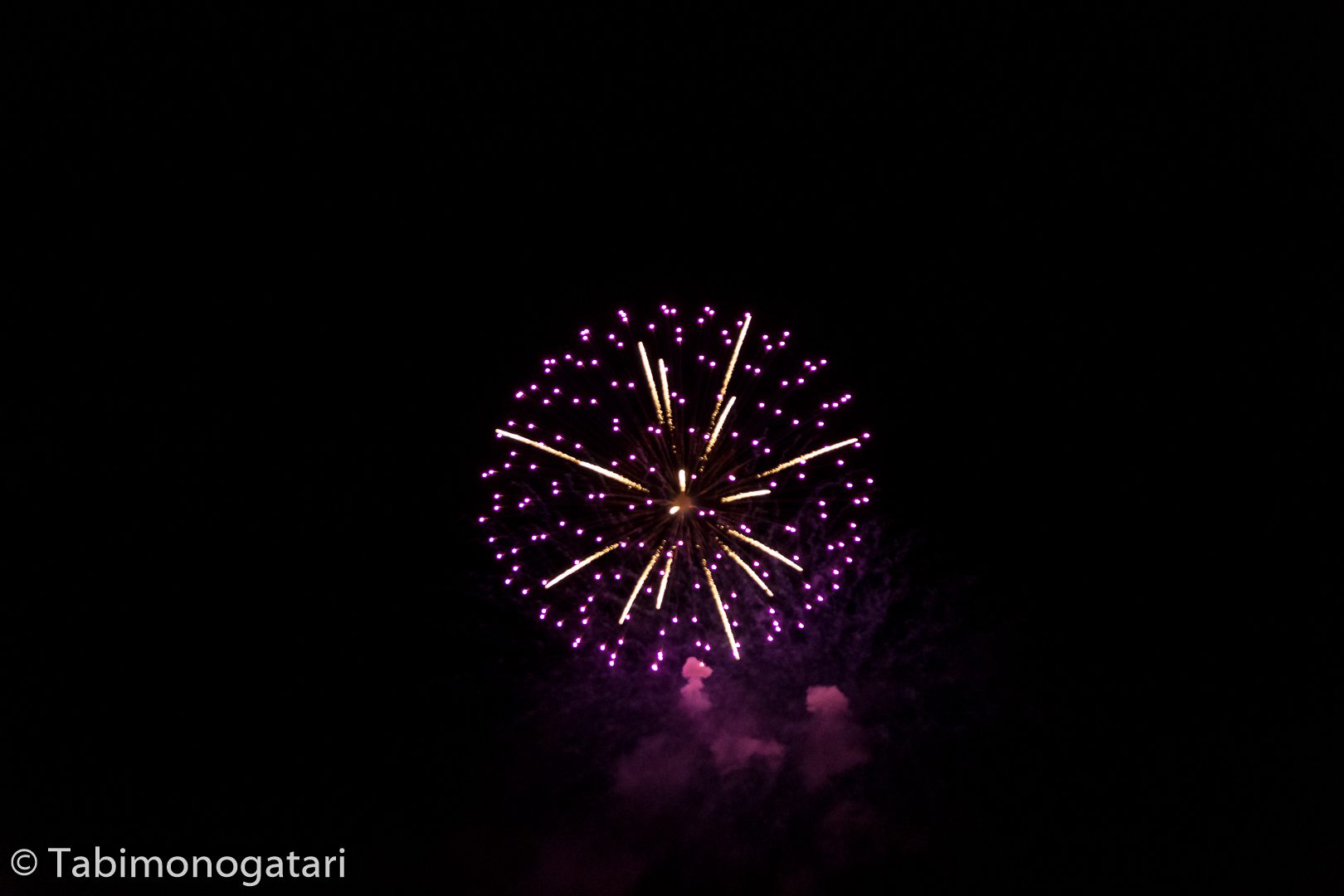 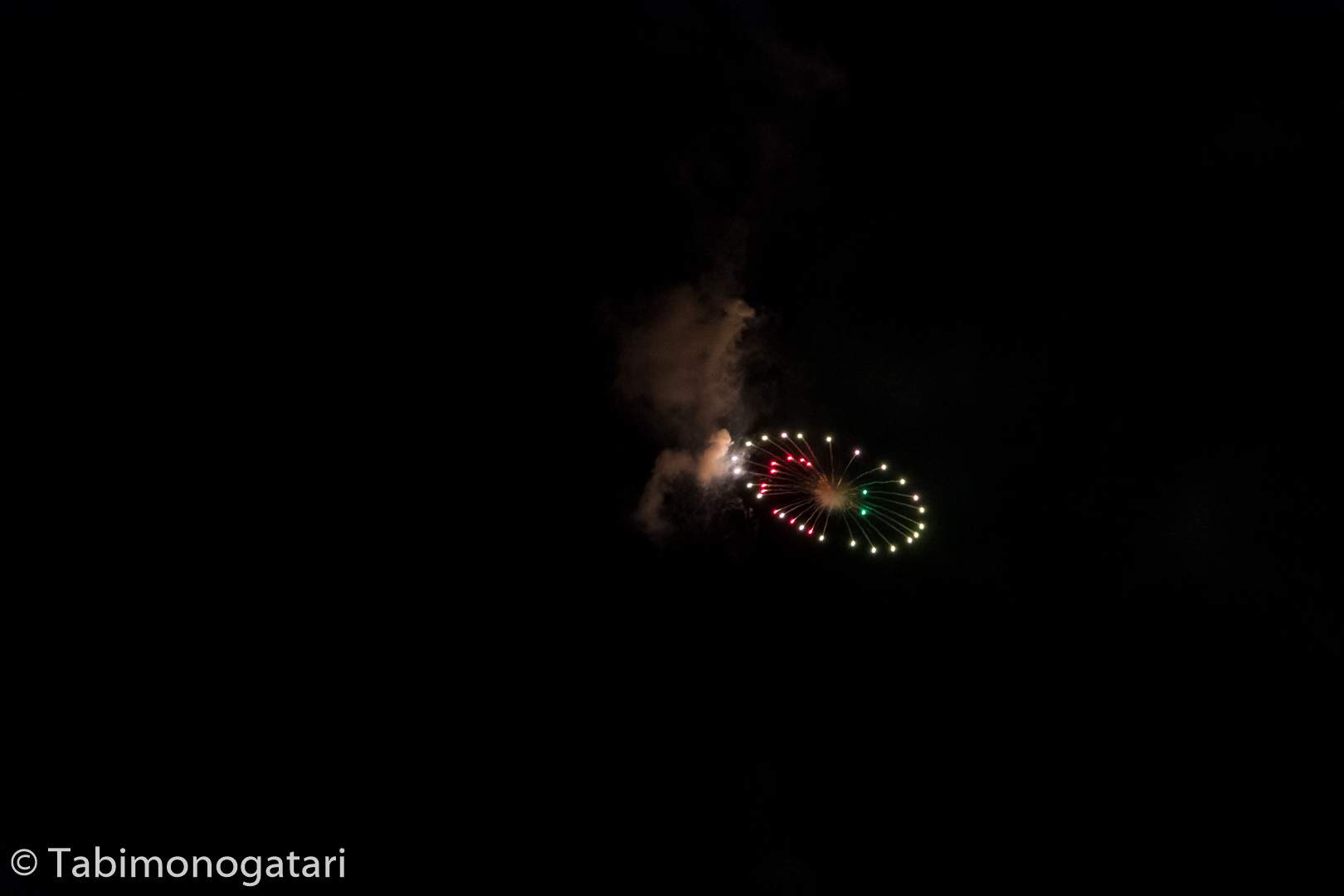 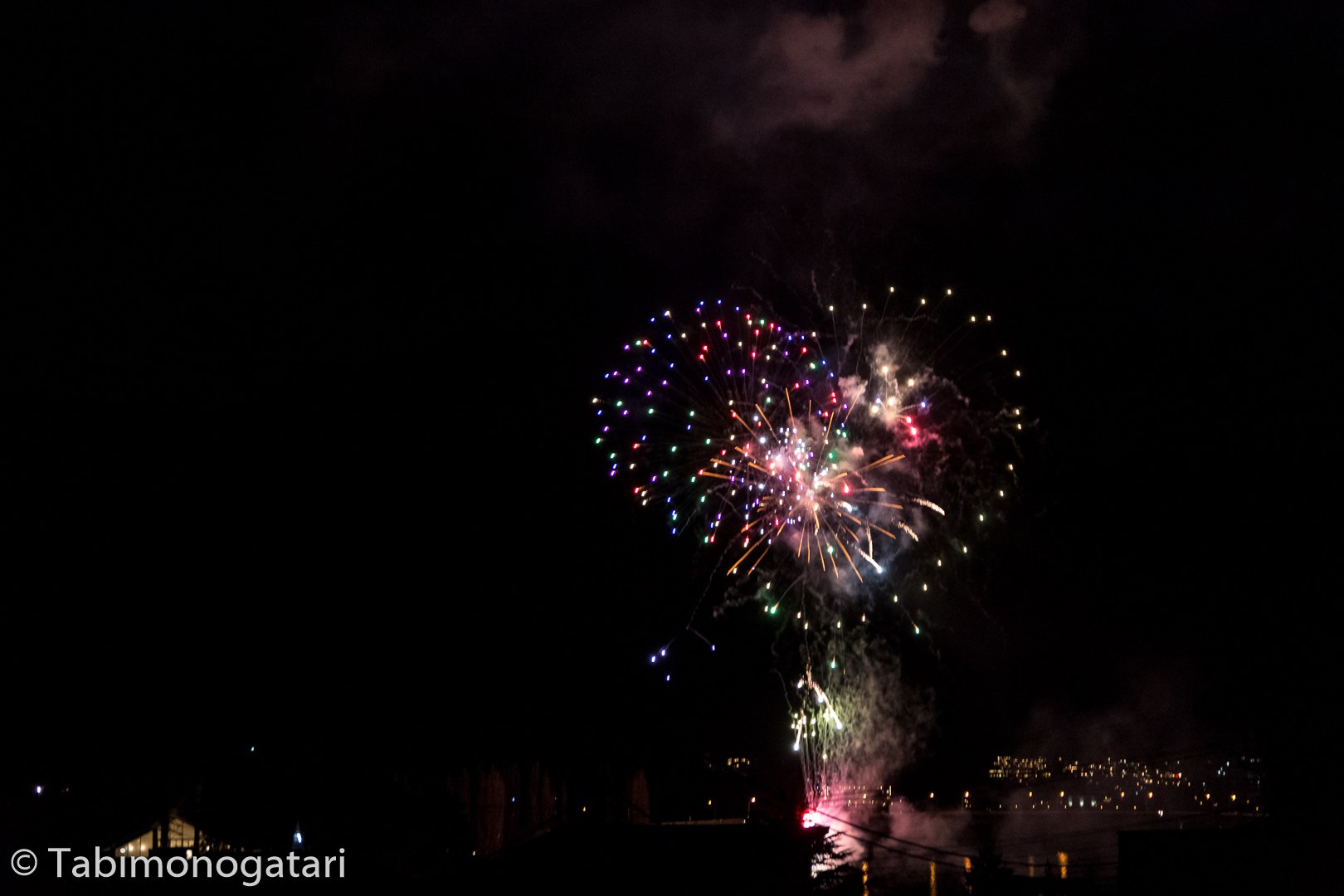 Afterwards we returned to the station and embarked on a three hour journey home. Only local trains operated at this time, so it took some time until we were back. At the station, there was another themed train, this time it was about the partnership of the Japanese train company and the Matterhorn Gotthard Bahn. The train was nicely decorated with posters and signs. I remember the opposite side of the collaboration in Zermatt, too. 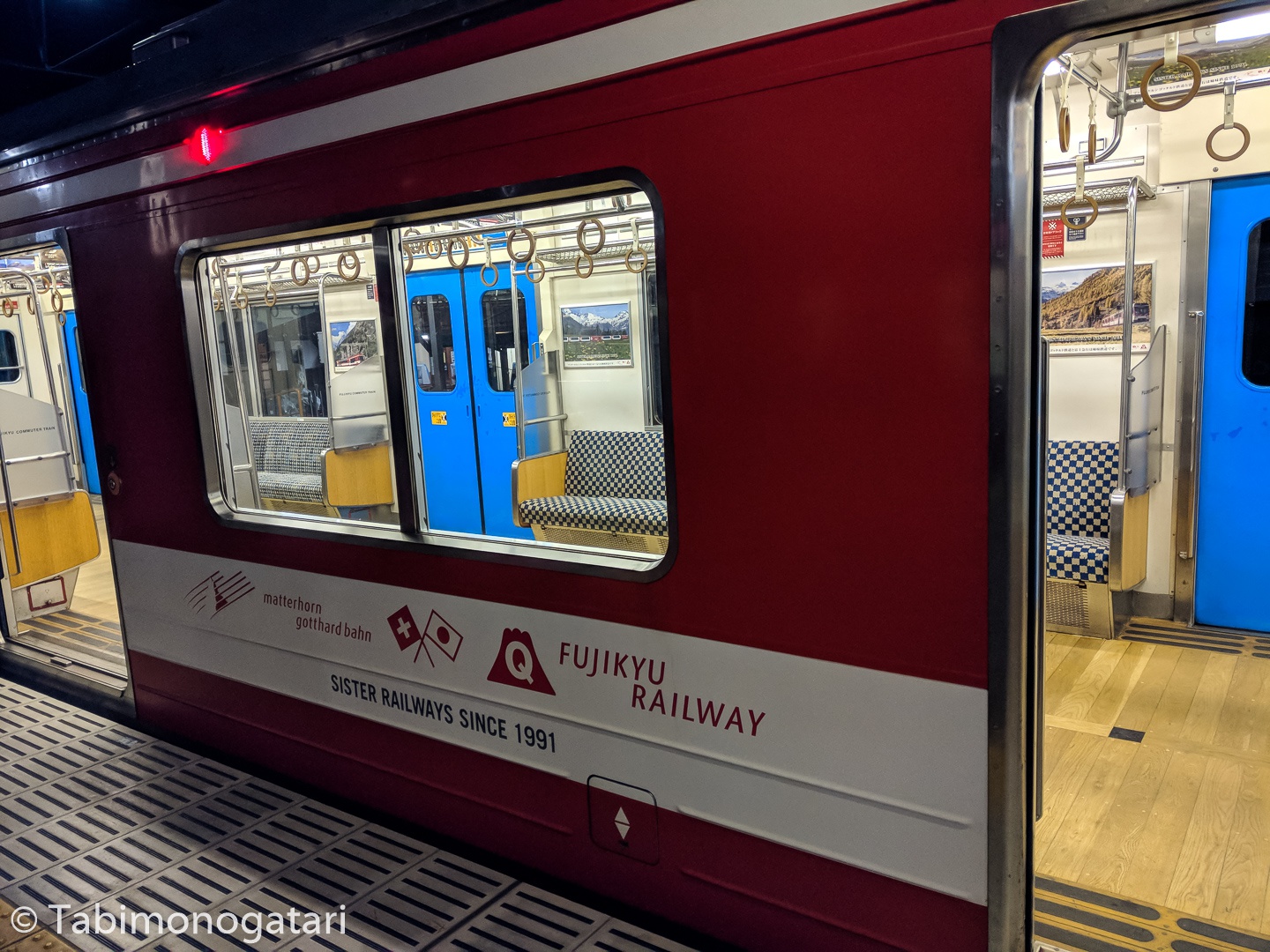 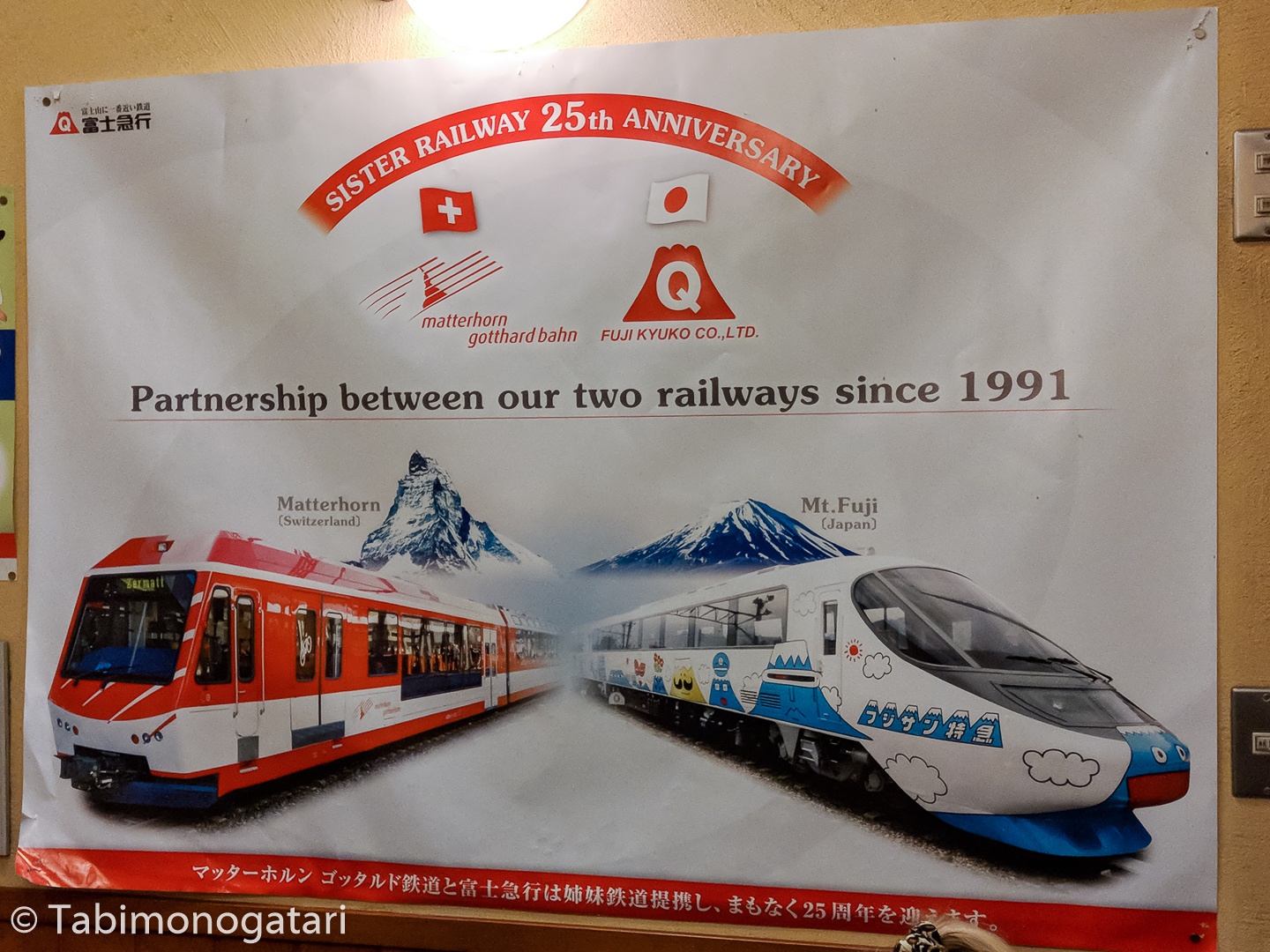 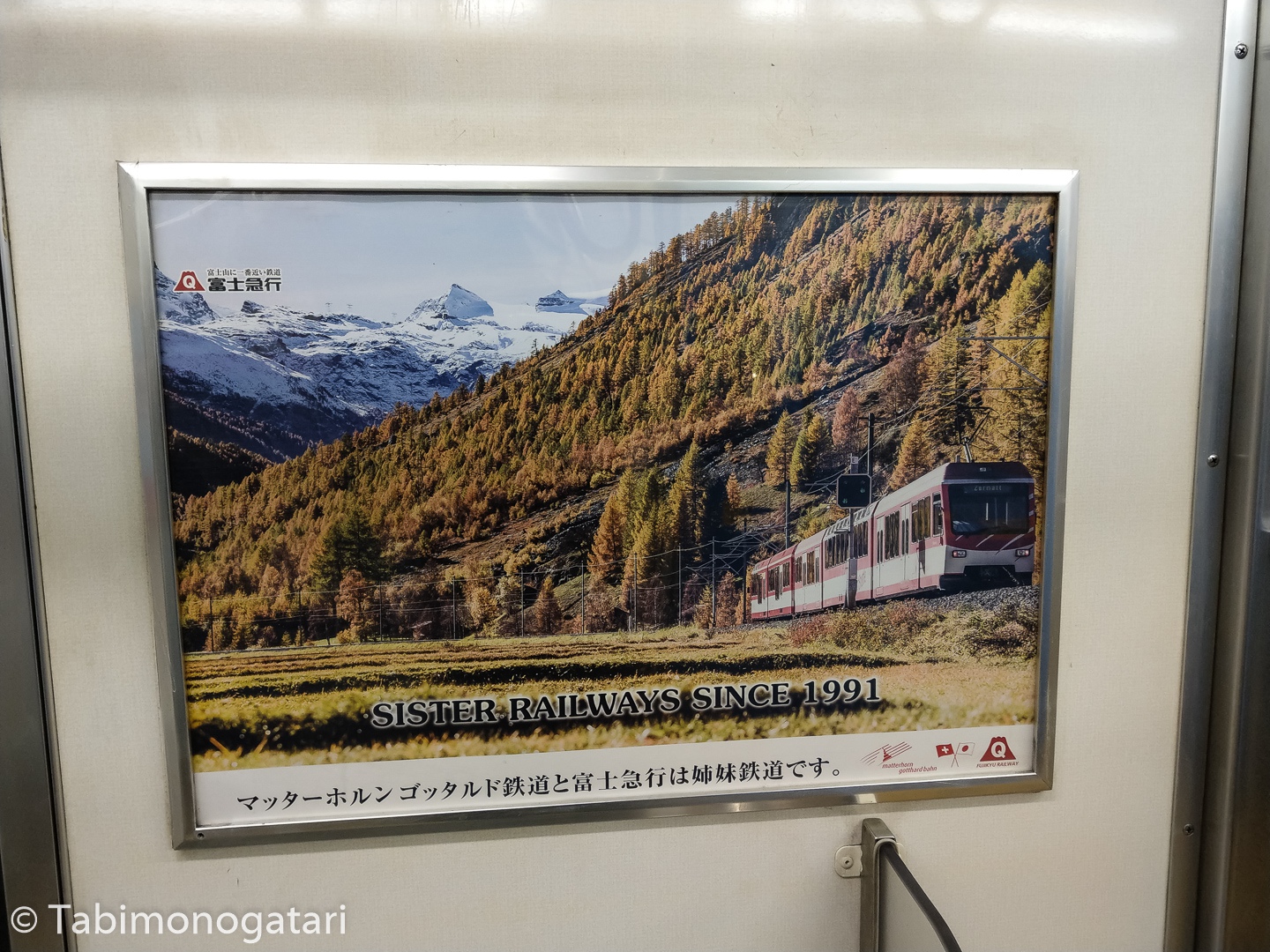 Finally in Shinjuku I could transfer one more time to reach my destination. Luckily this was not the last train yet, so there was no rush.

It was great to see Mount Fuji from another angle. I highly recommend going to the Yamanashi area, ideally in spring or autumn. And try some hôtô! 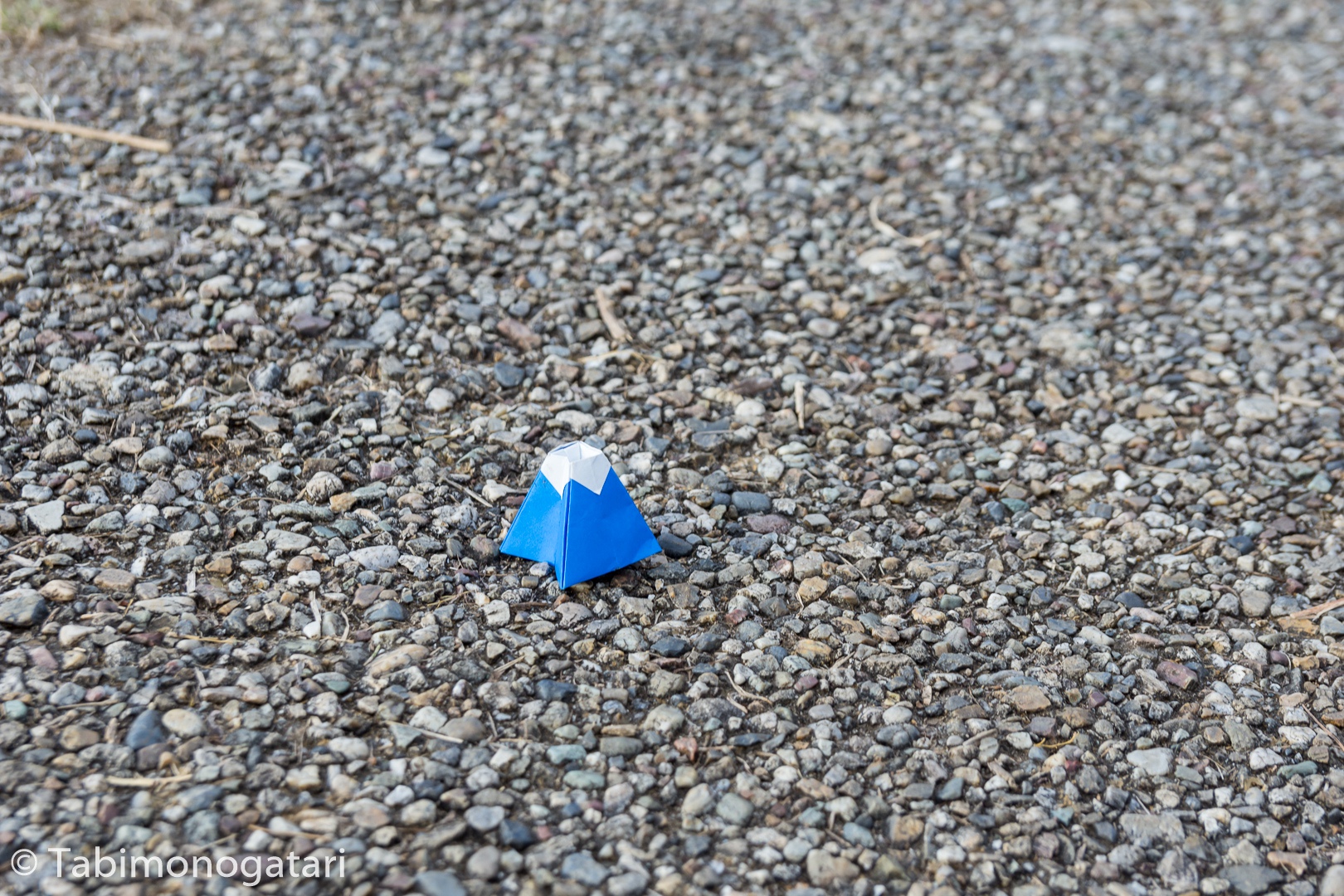 Tagged on: Fuji    Kawaguchiko
We use cookies to ensure that we give you the best experience on our website. If you continue to use this site we will assume that you are happy with it.OK