Another day began at a gyudon restaurant. You see, aside from bakery goods or an onigiri from a conbini this is my favorite way to start the day. Also, here you can find a cheap and nutritious breakfast and besides gyudon there are many options in the morning that contain no meat at all. Today I had a breakfast set meal with grilled salmon, miso soup, rice, pickles and some tororo paste (made from yam). 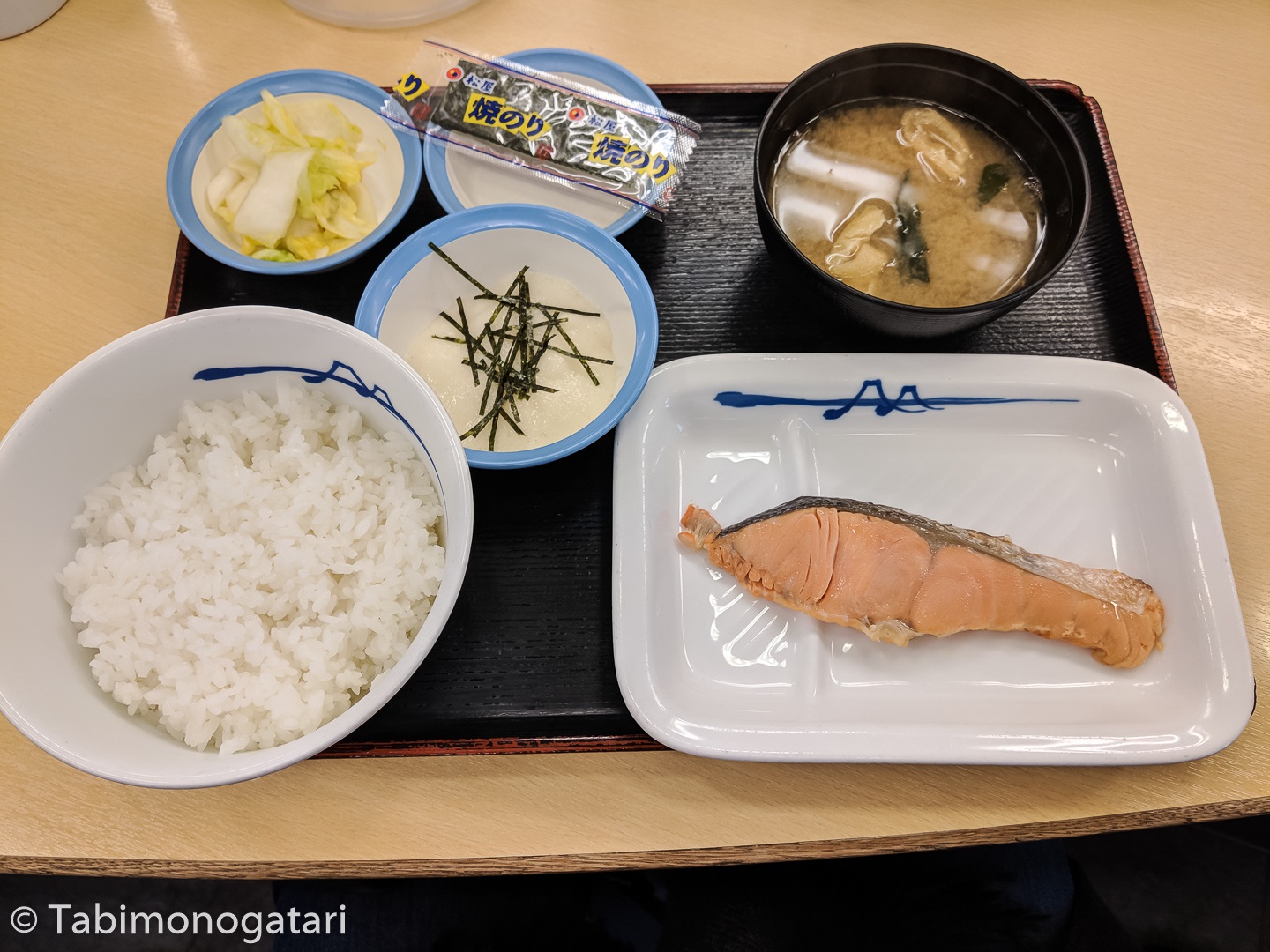 Last time I toured the Kansai area, I glimpsed upon the Yamazaki distillery building next to the railroad between Osaka and Kyoto. Intrigued, I wanted to stop by and visit if I could one day. I was very lucky to get a spot for the Yamazaki distillery tour just one day in advance. Only one slot was still open, so I recommend to reserve early in advance (in Japanese only). 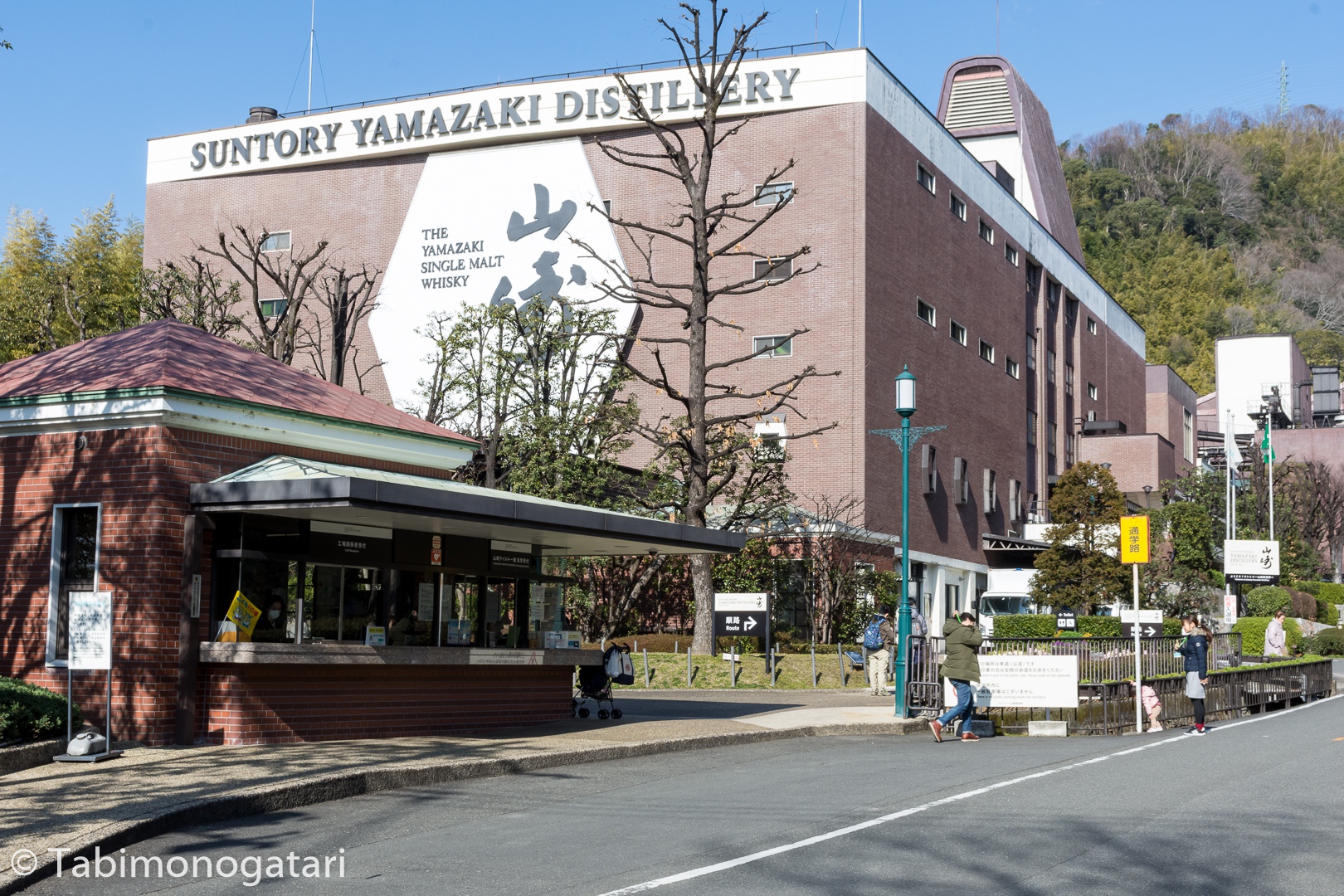 The factory is located along the JR line at Yamazaki station and can be reached in 5 minutes by foot from there. At the entrance I was registered and informed about an English language audio guide app that can be used during the tour. For the tour about 20 people showed up, although more were supposed to come. Among them were also some foreigners. 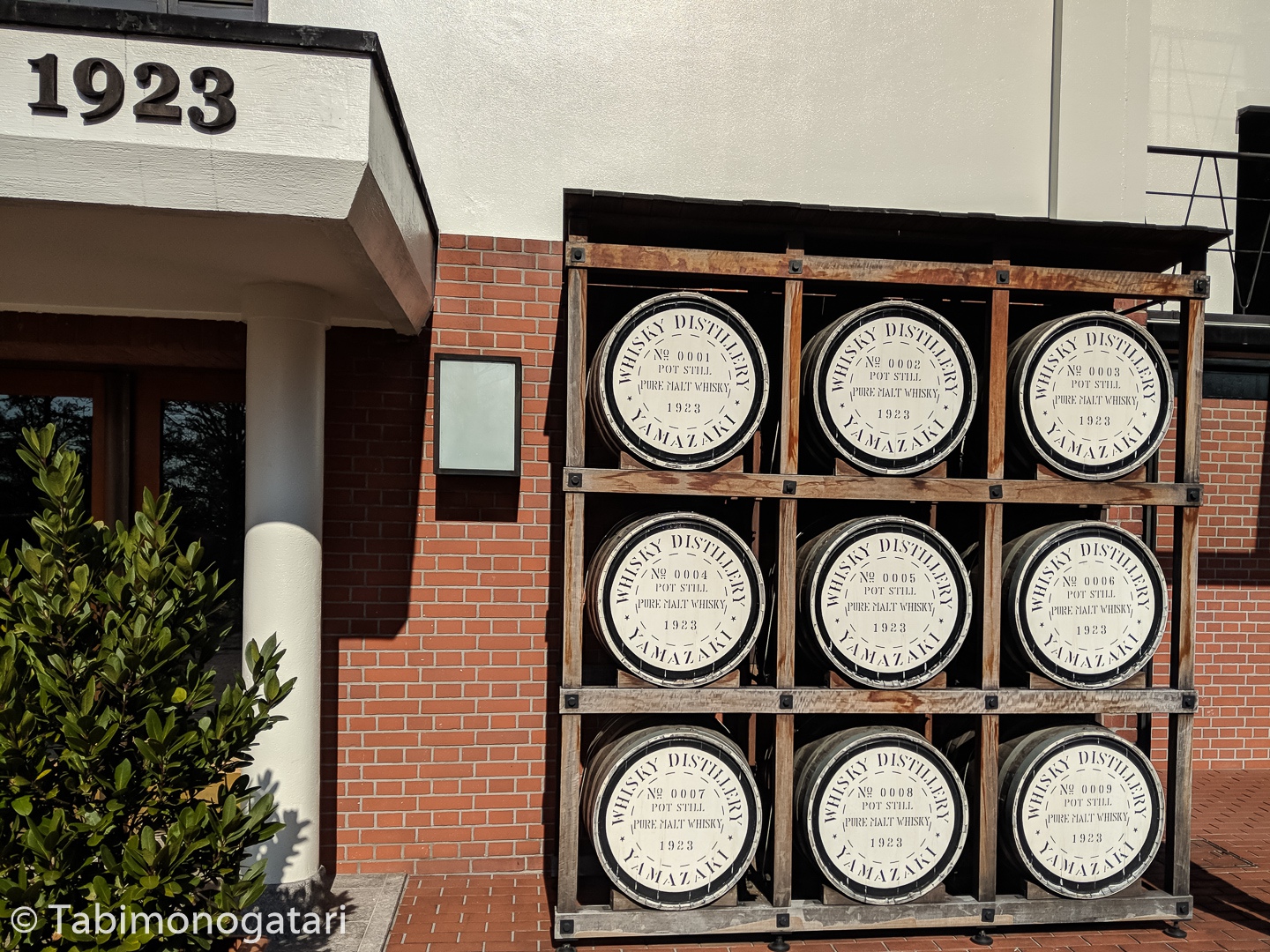 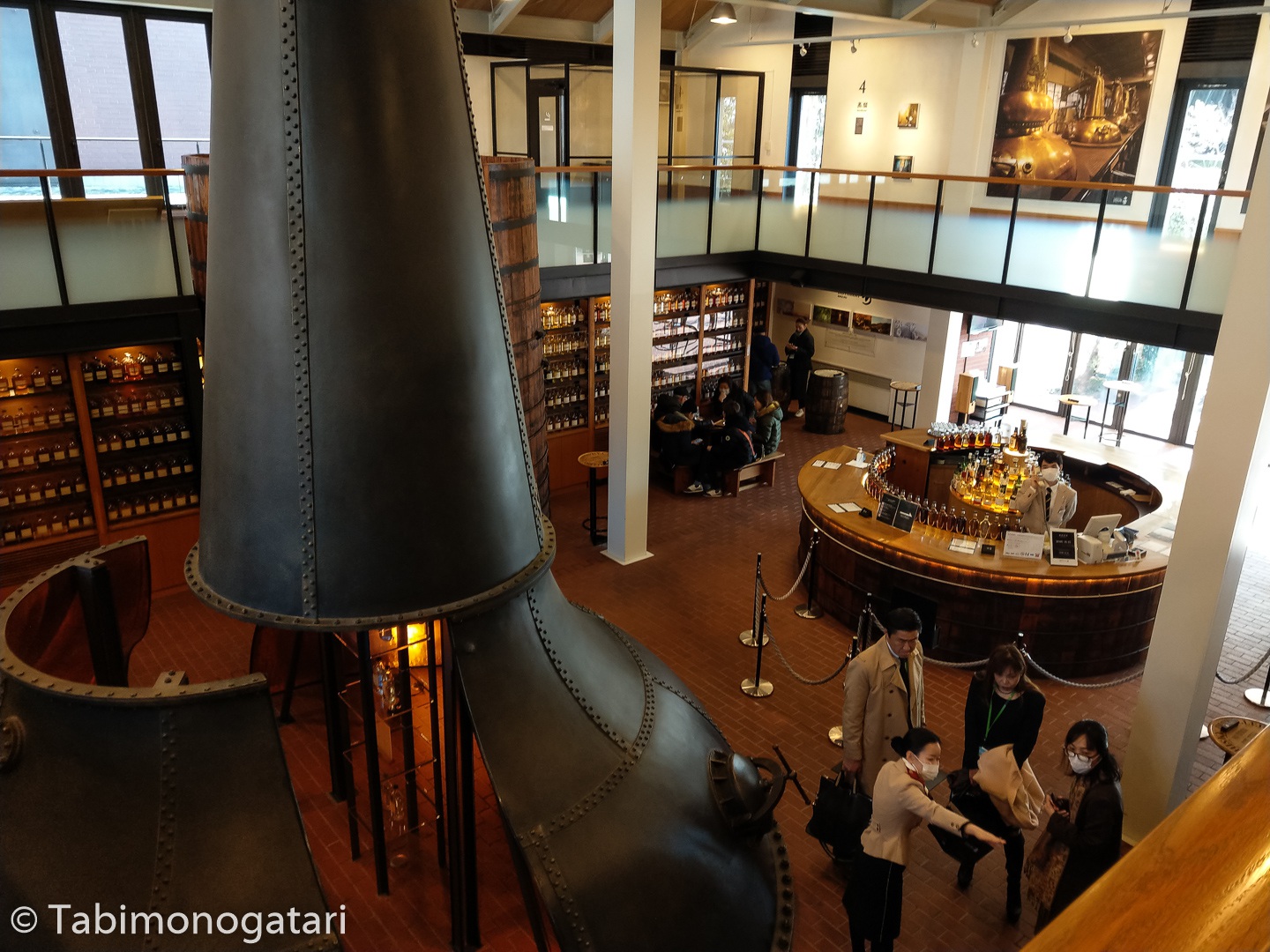 The guide lead us through the factory and explained the manufacturing process. The distillery was established here because Yamazaki was known for its mineral spring water which was used for tea production. 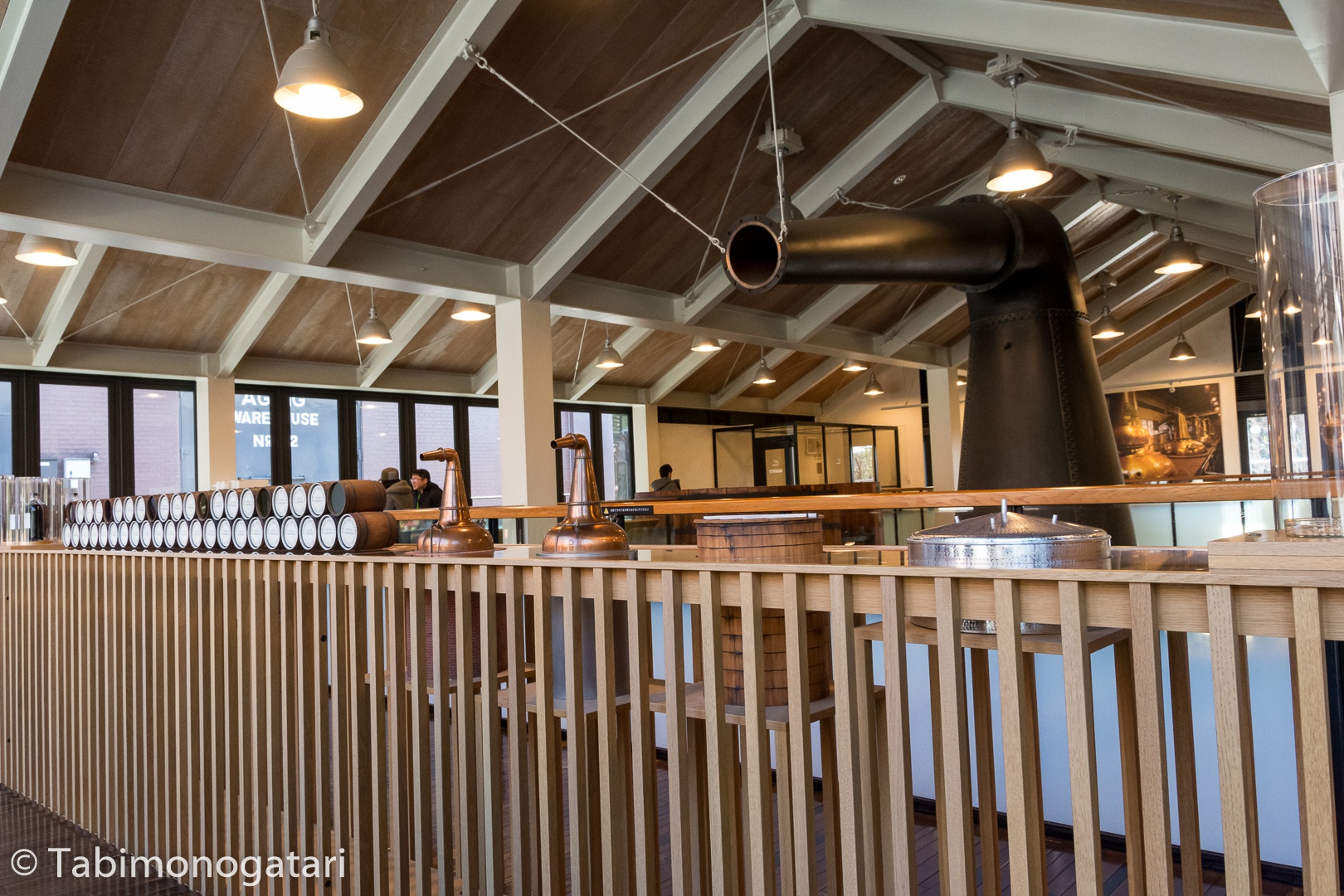 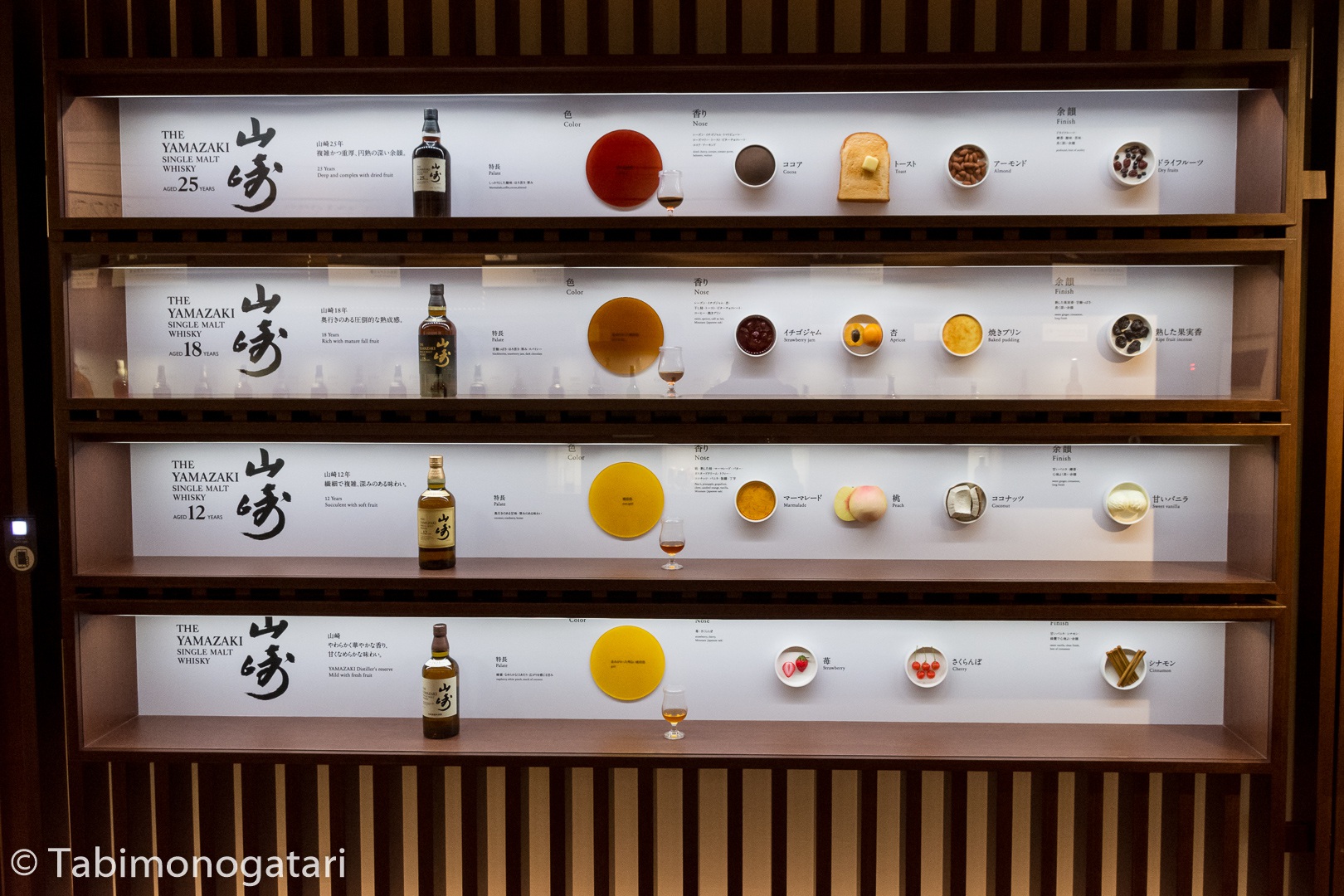 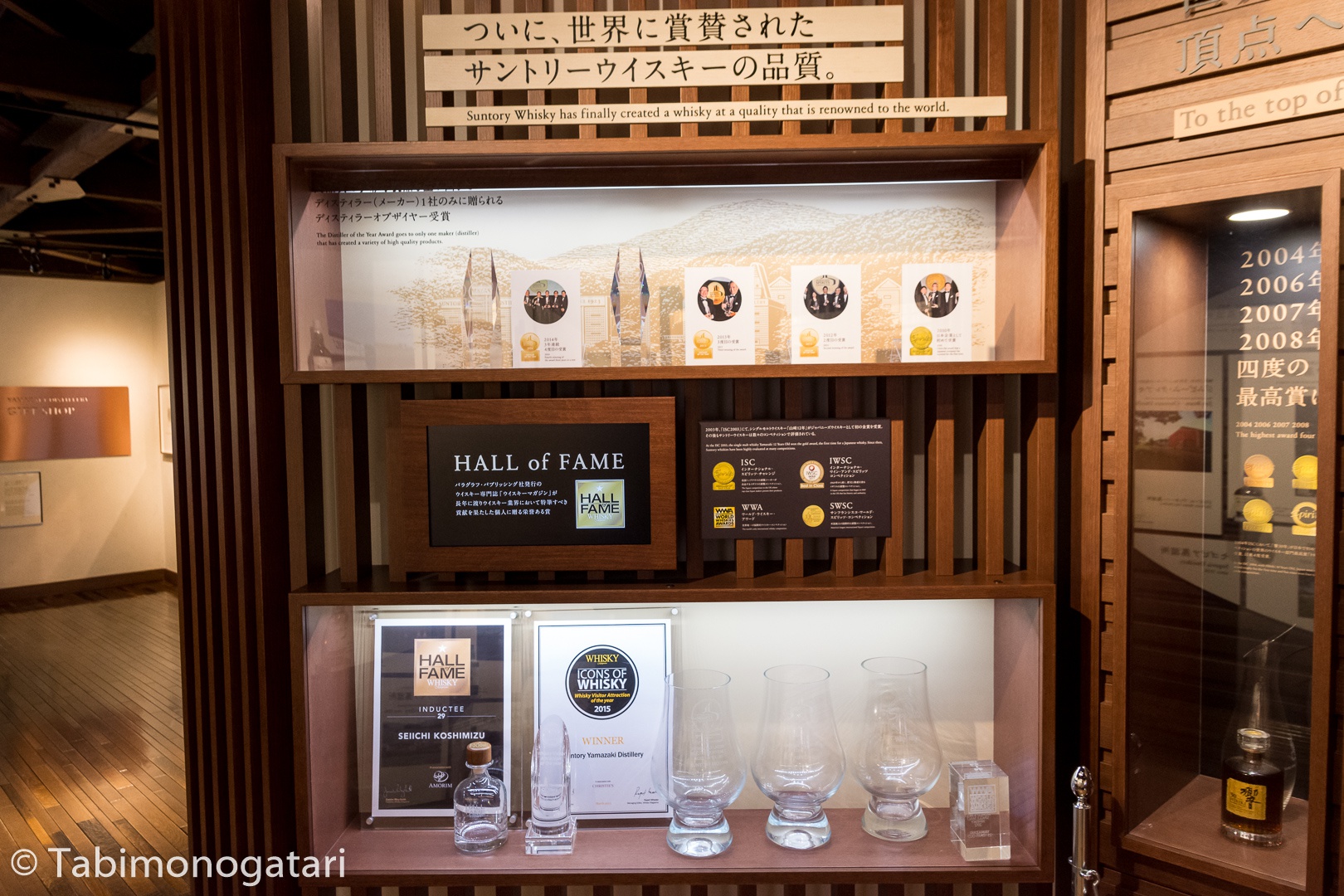 In the first production hall it smelled like whisky already. Here the barley is being mashed to enzymatically break down the starches to sugars. Right next to it was the fermentation area, where several large steel and wooden tanks stood.

Next came the distillation section, where the scent reminded me more of beer. The various distillation pots had different shapes which influences the composition of the distillates collected and an turn the aroma. Even though Yamazaki is a “single malt” whisky, it is blended with several different batches from the same factory to arrive at the final flavor profile. Apparently this is quite unique to this distillery. 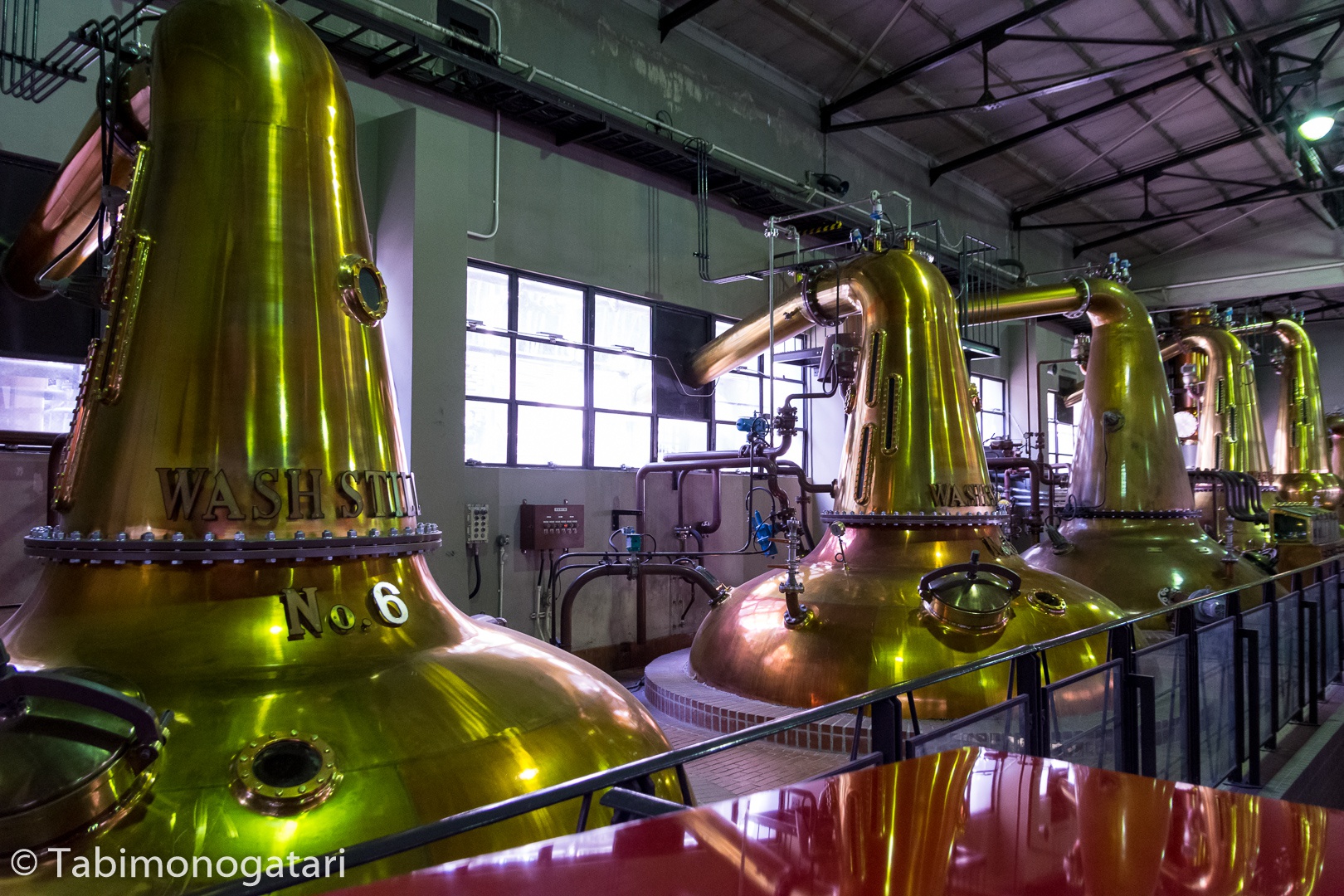 Then we came to the warehouse where hundreds of wooden casks were lined up, each labeled with its filling date. Here the smell of whisky was intense again. The barrels reached from back to the 1990s to last year. Every year, 2-3% evaporate from the barrel under the storage conditions and the so-called “angles share” will amount to half of the original volume after full maturation at 25 years. This explains the massive difference in price between the undated, the 12 year version, and the 25 year version. 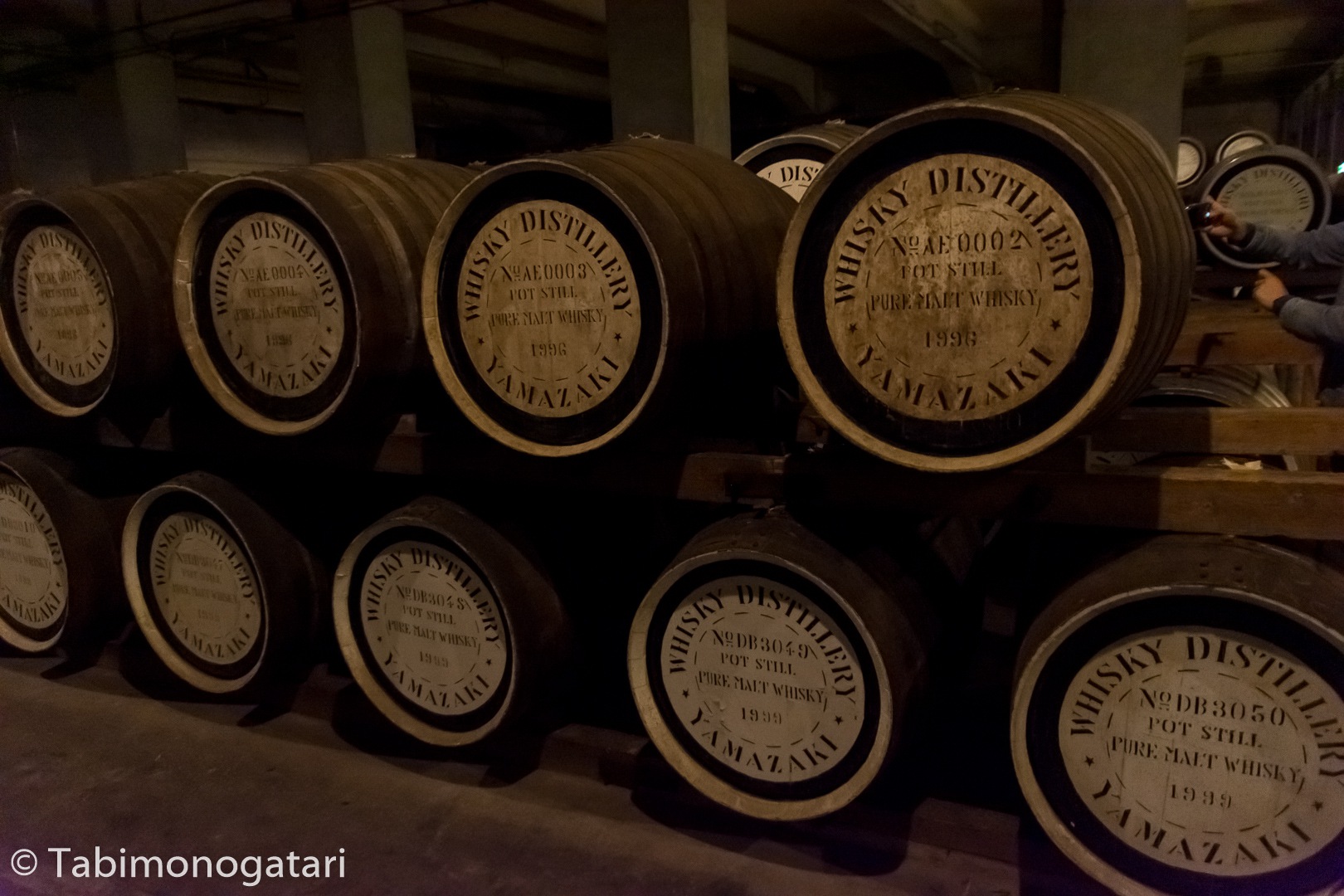 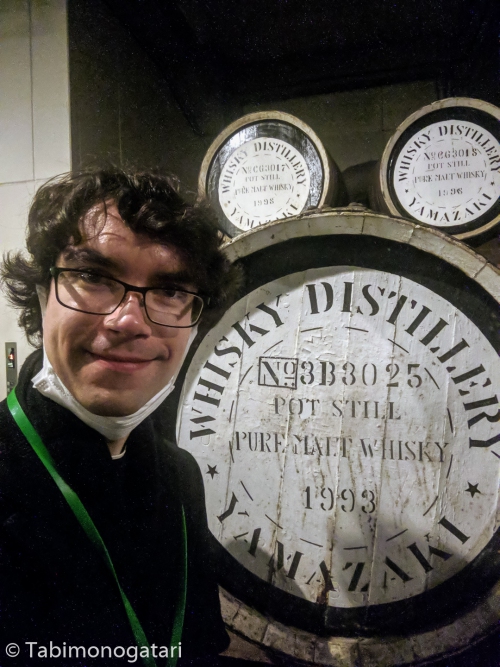 Finally we assembled for a tasting session which was included in the price of the tour. In front of us we had four glasses of whisky, as well as some snacks and water. The guide explained us the differences between the different glasses and recommended us how to taste them and in which sequence. 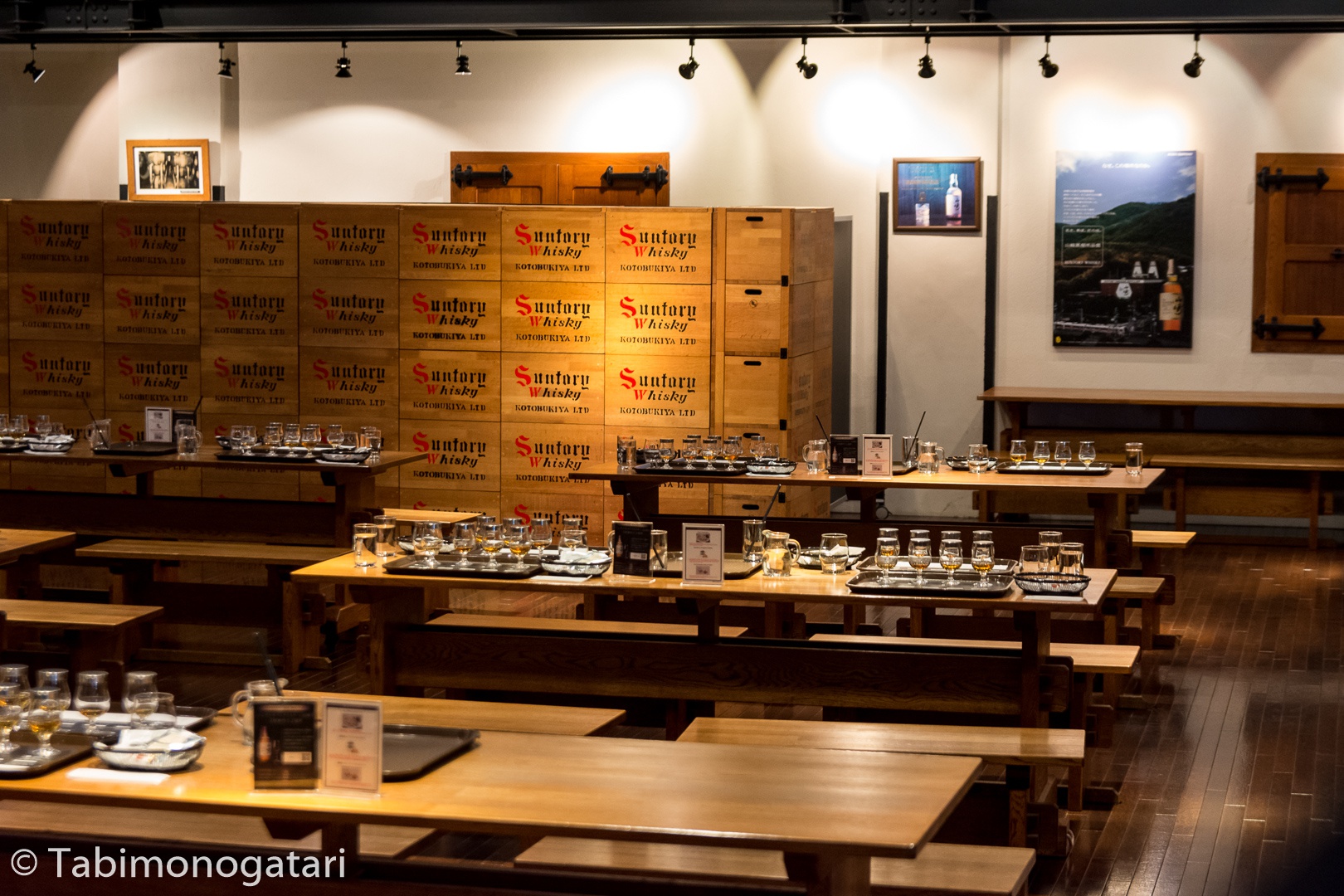 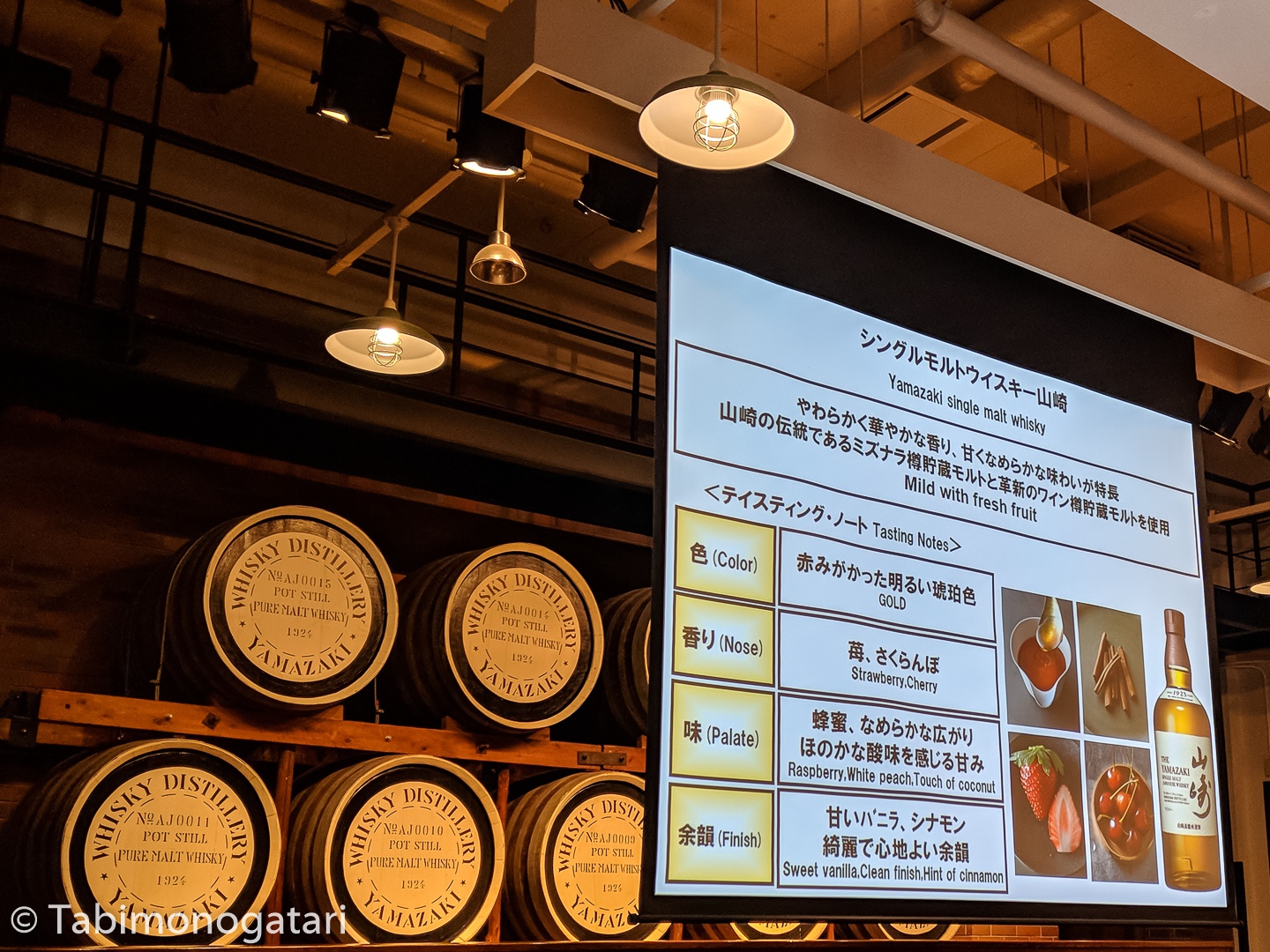 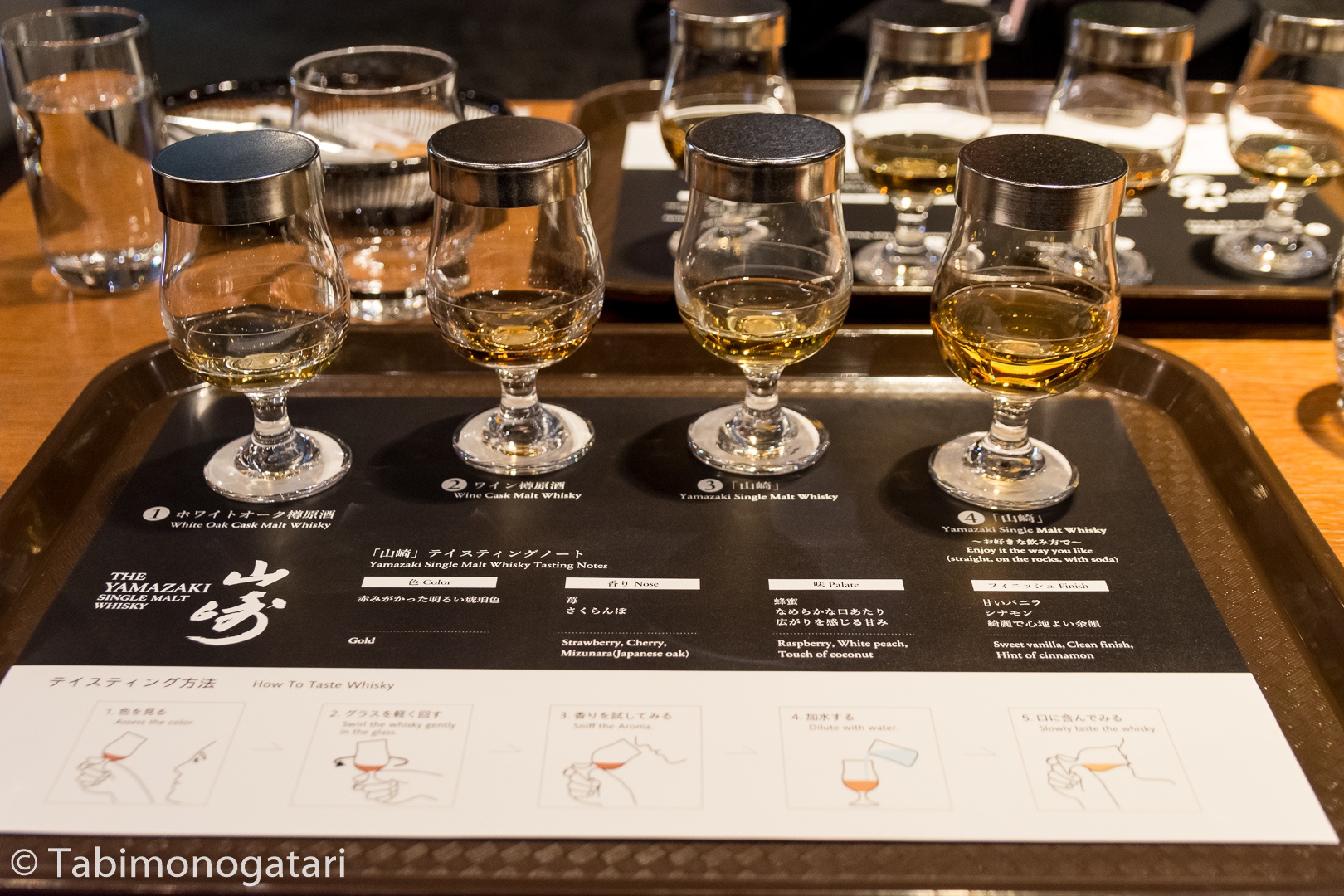 First came a single malt whisky from a white oak cask, then another one aged in a red wine cask. The third one was the typical Yamazaki which included a blend of both of these. The blended one clearly surpassed the single barrel whiskys in my opinion. Finally we had another glass of the same Yamazaki which we could enjoy in a different manner. I followed the suggestion and prepared a Highball. Starting with the whisky in a high glass, followed by ice cubes and soda. This drink is common in bars in Japan and I also enjoy it from time to time.

At the tasting bar next door, one could sample more spirits, both local and external ones. Here, the Hibiki, a blended whisky from Suntory, was also on offer. A glass of 20 cl was just 200 yen, however the 25 year version was 2900 yen. I had a glass of the undated one which was nice and mellow, different from the strong smoky Scottish whiskys.

At the tasting I talked to a young woman from the Netherlands who conducted research in Japan. After the visit I accompanied her until Kyoto but then parted to leave for Uji.

Uji is one of the three big tea cultivation regions, the other two being Shizuoka and Kagoshima. The city just south of Kyoto is worth a visit beyond tea shopping of course. Until now I did not have a chance to go, so I decided to spend a few hours there at the least.

From Kyoto the JR line conveniently connects to Uji, but in general the private railways are a better option, especially in direction of Osaka if one can freely choose. In general, I think JR is not so practical within the Kansai region.

A short walk from the station led to the start of the Omotesando shopping street along the Uji river. Many restaurants offered products containing green tea so I tried some matcha ramen (with green matcha soba) and also matcha gyoza in a local restaurant. The taste was good, with the green tea aroma not being too strong. 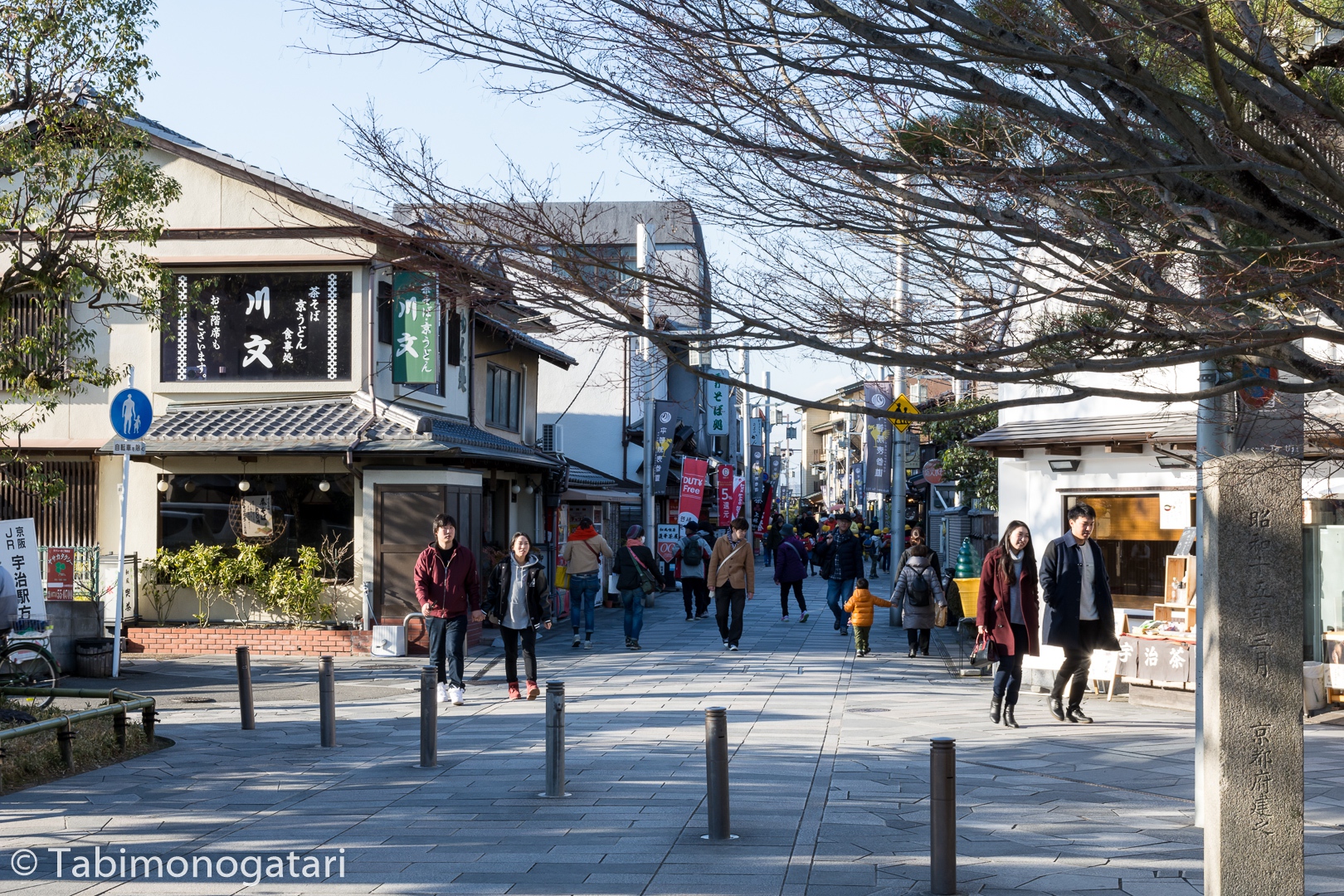 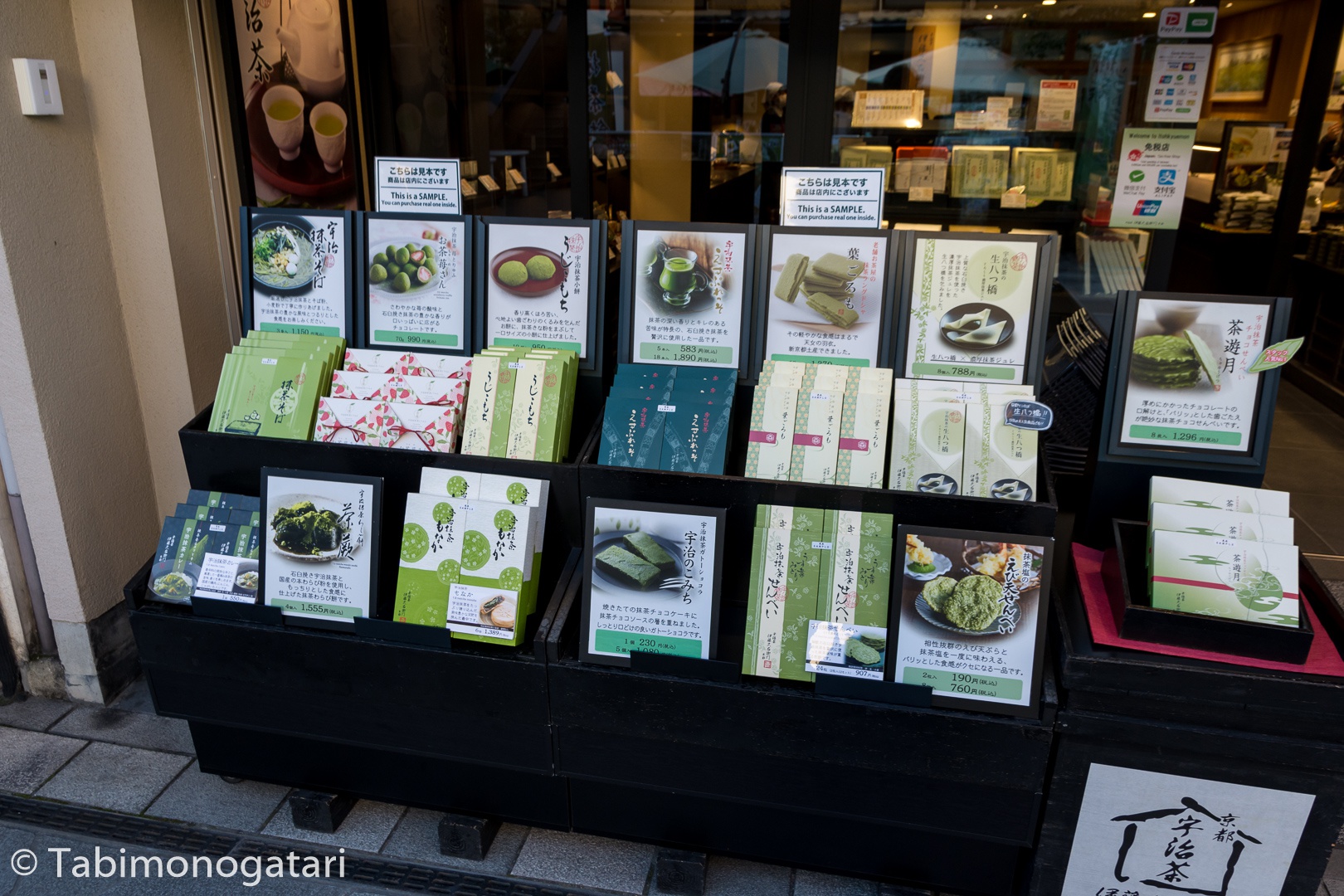 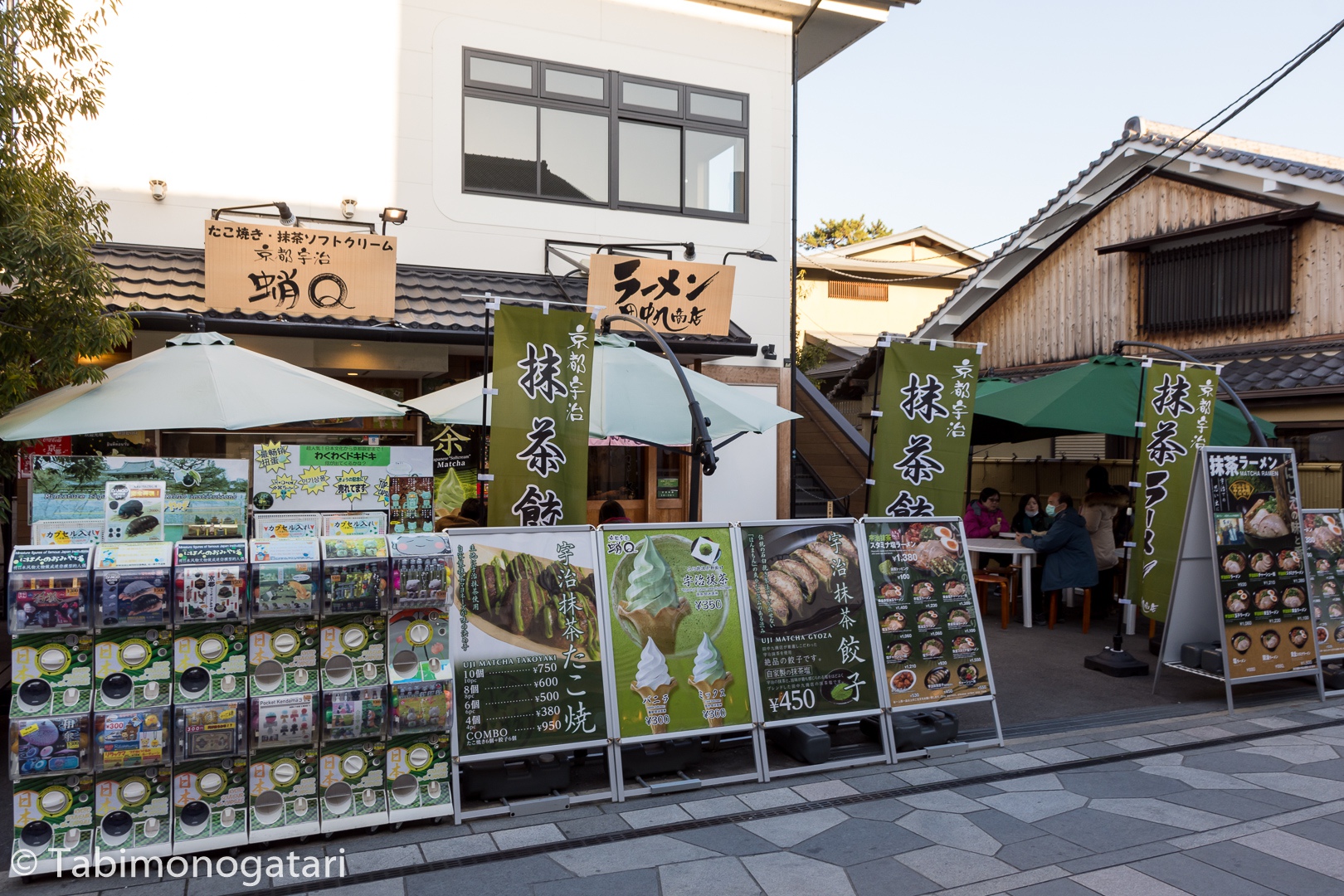 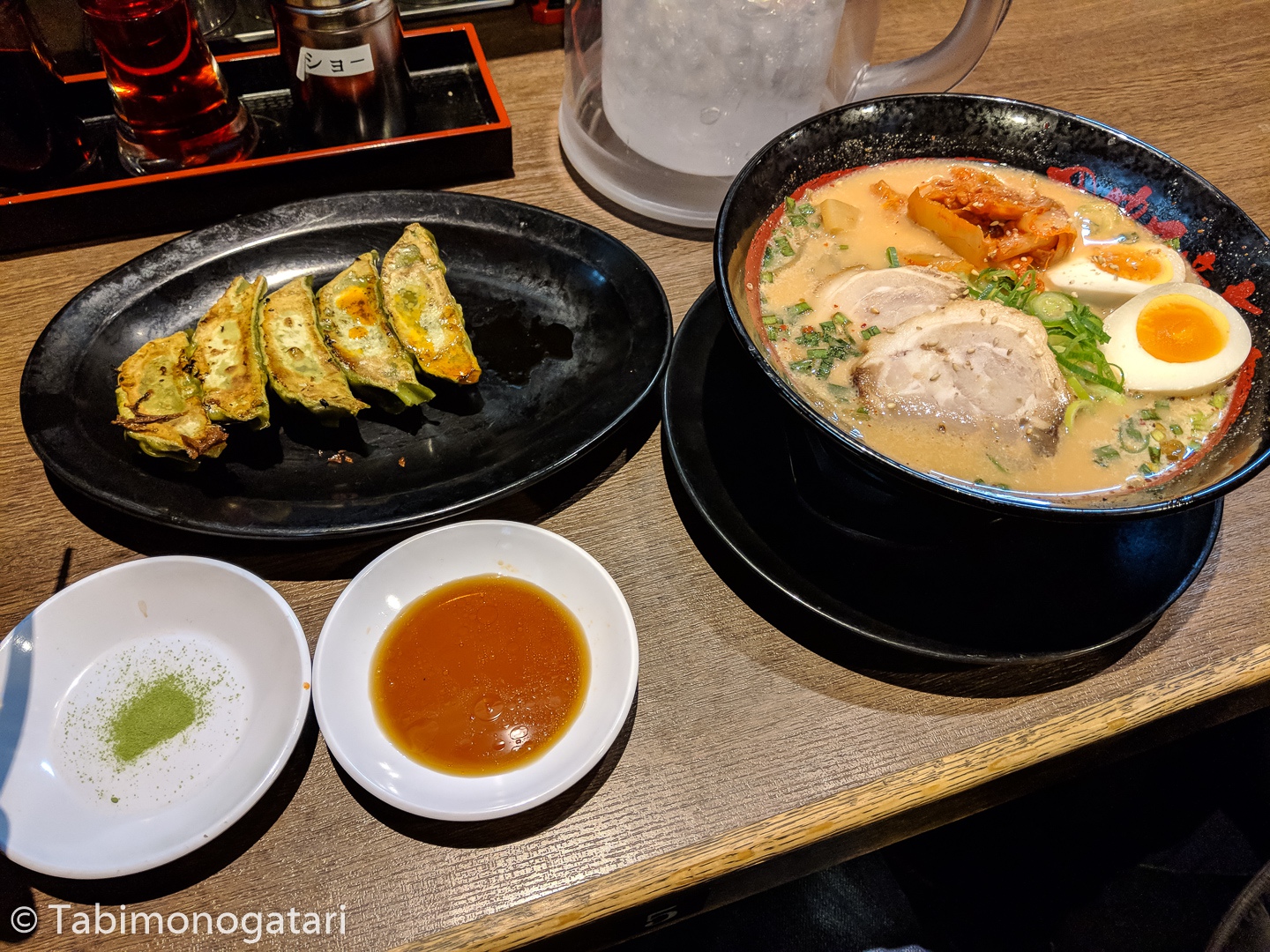 The street leads up to Byodoin, a significant temple inside a pretty garden. It was built in 998 and later converted into the current temple around 1050. It contains two phoenix statues along other objects of cultural significance. Unfortunately, the pond was currently being maintained so the typical view with the water reflection was not possible. Even without the water, the temple impressed me and I imagine in spring it will look really beautiful again. 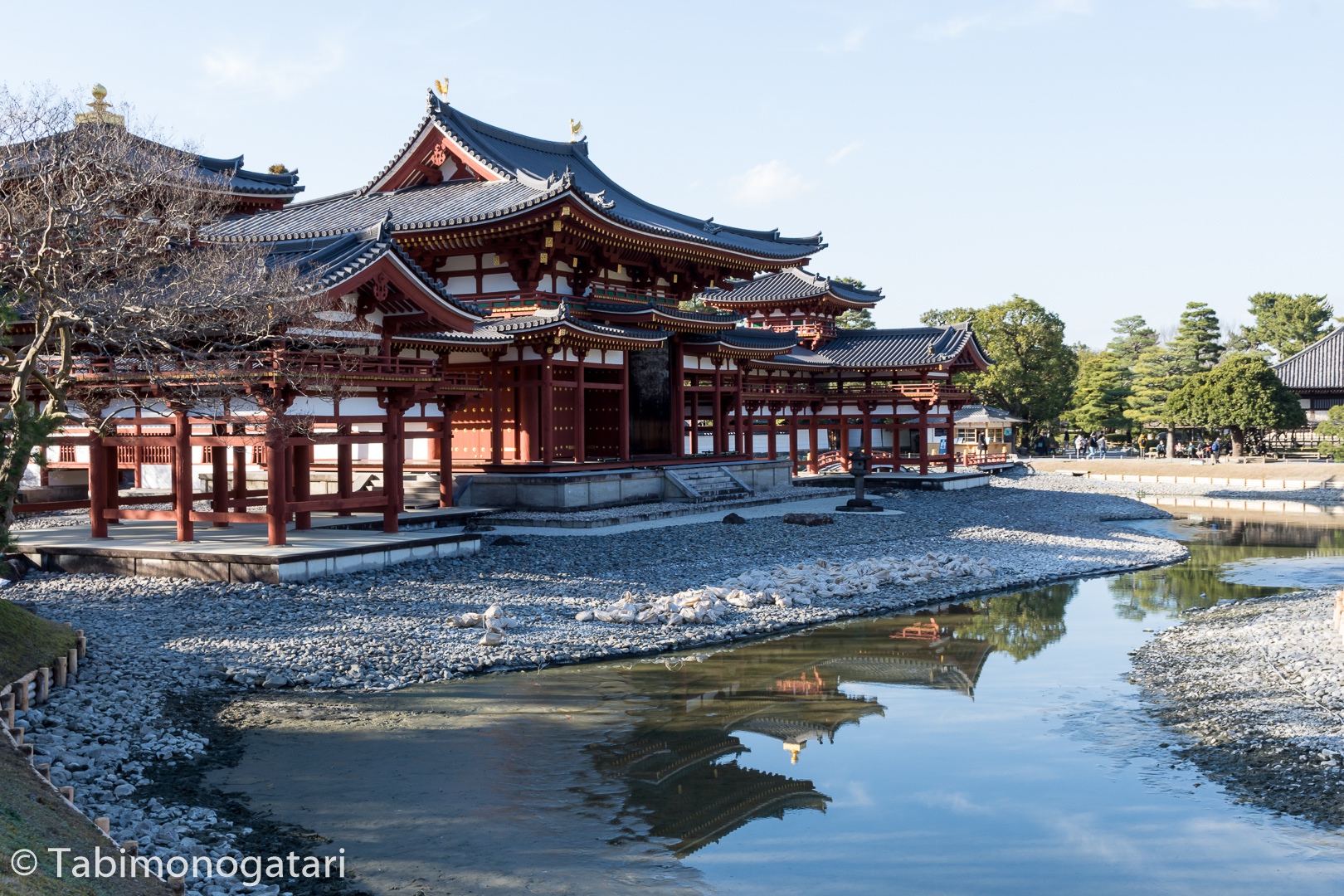 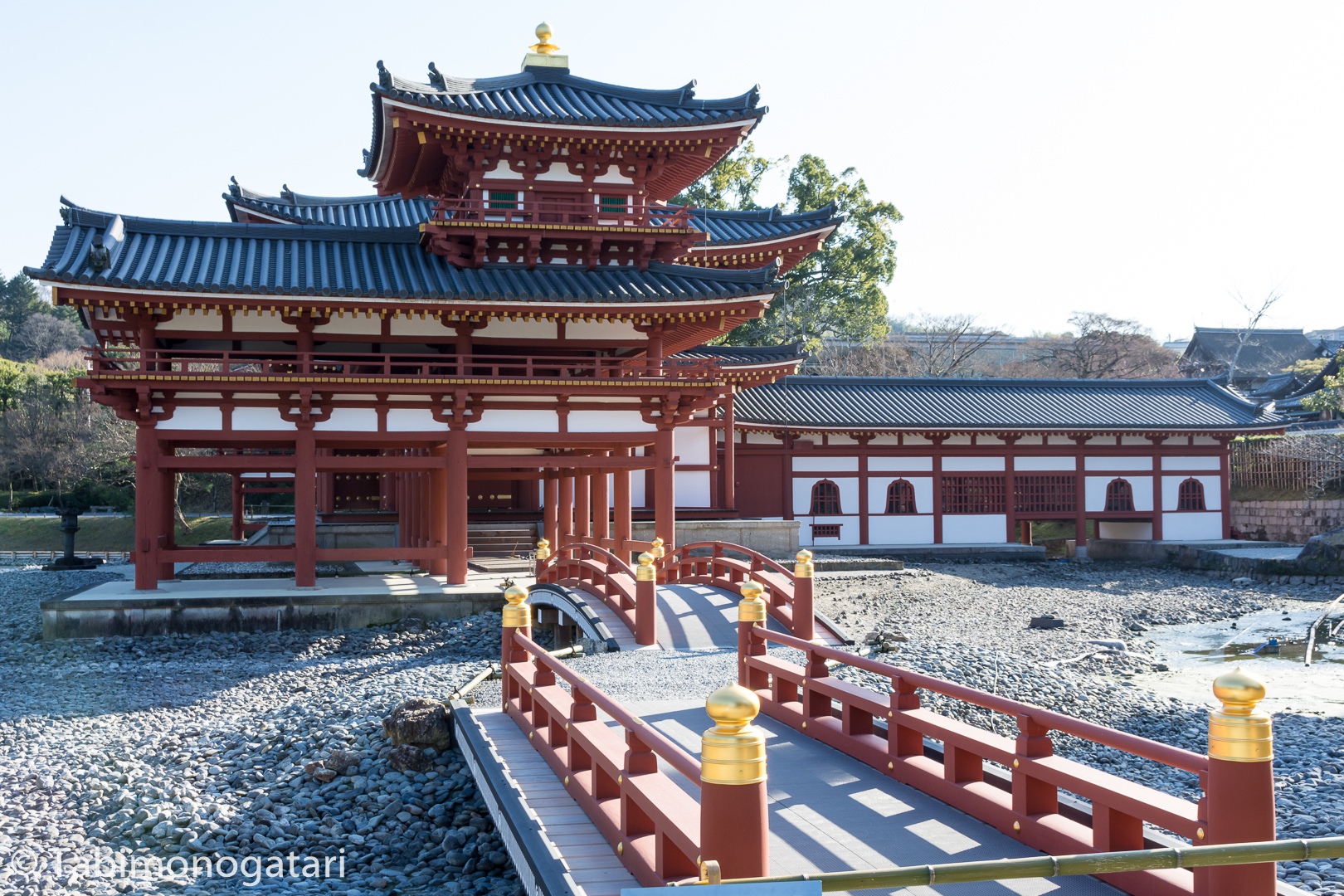 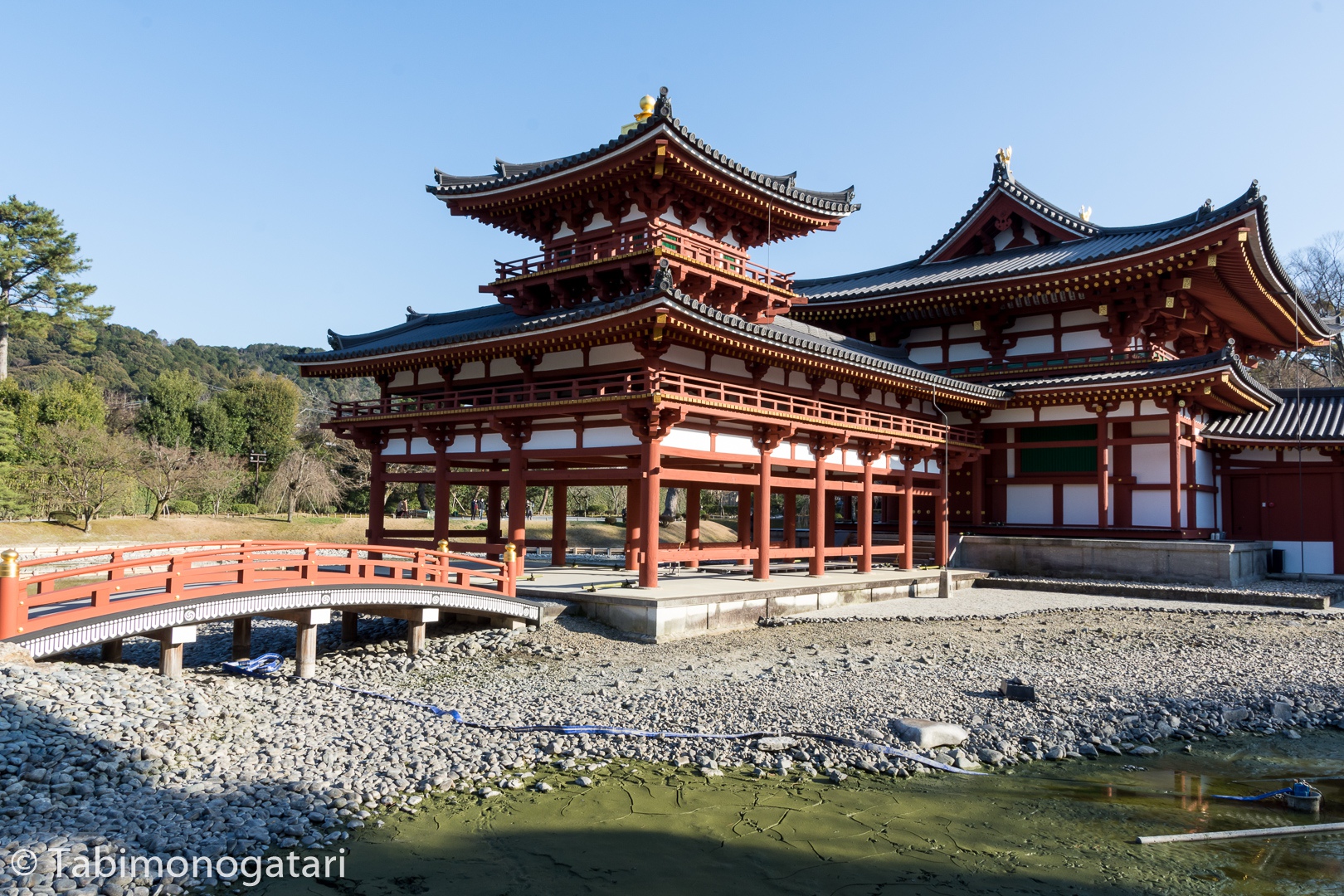 Along the river a few tea houses offered freshly brewed green tea, also I found out that cormorant fishing is done here during certain times. On the way back I picked up some tea and wagashi before heading to back Osaka. This time I took a different route via Nara. Because of my plans for the evening I had to leave a bit earlier than I wanted to, there is certainly more to explore here. 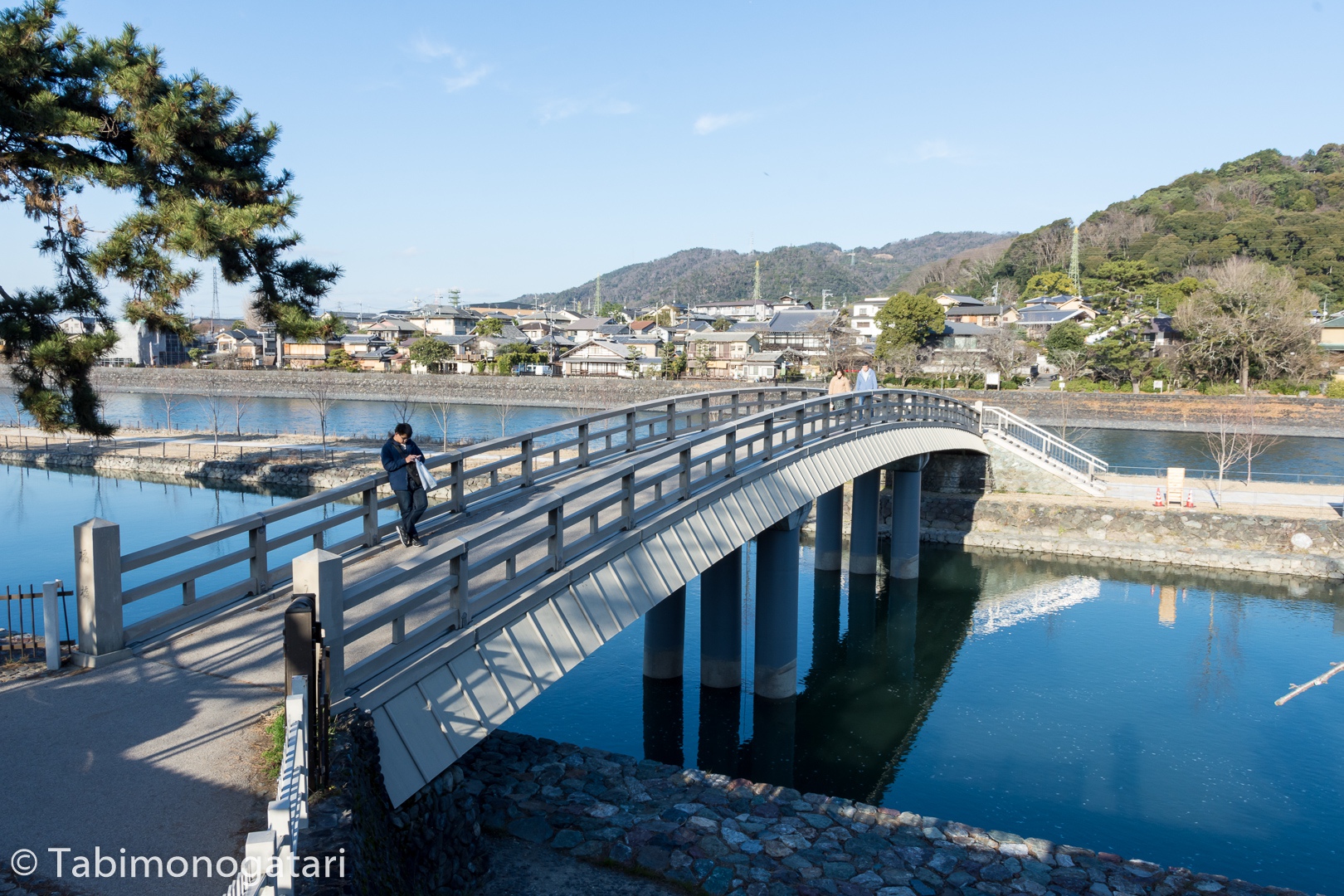 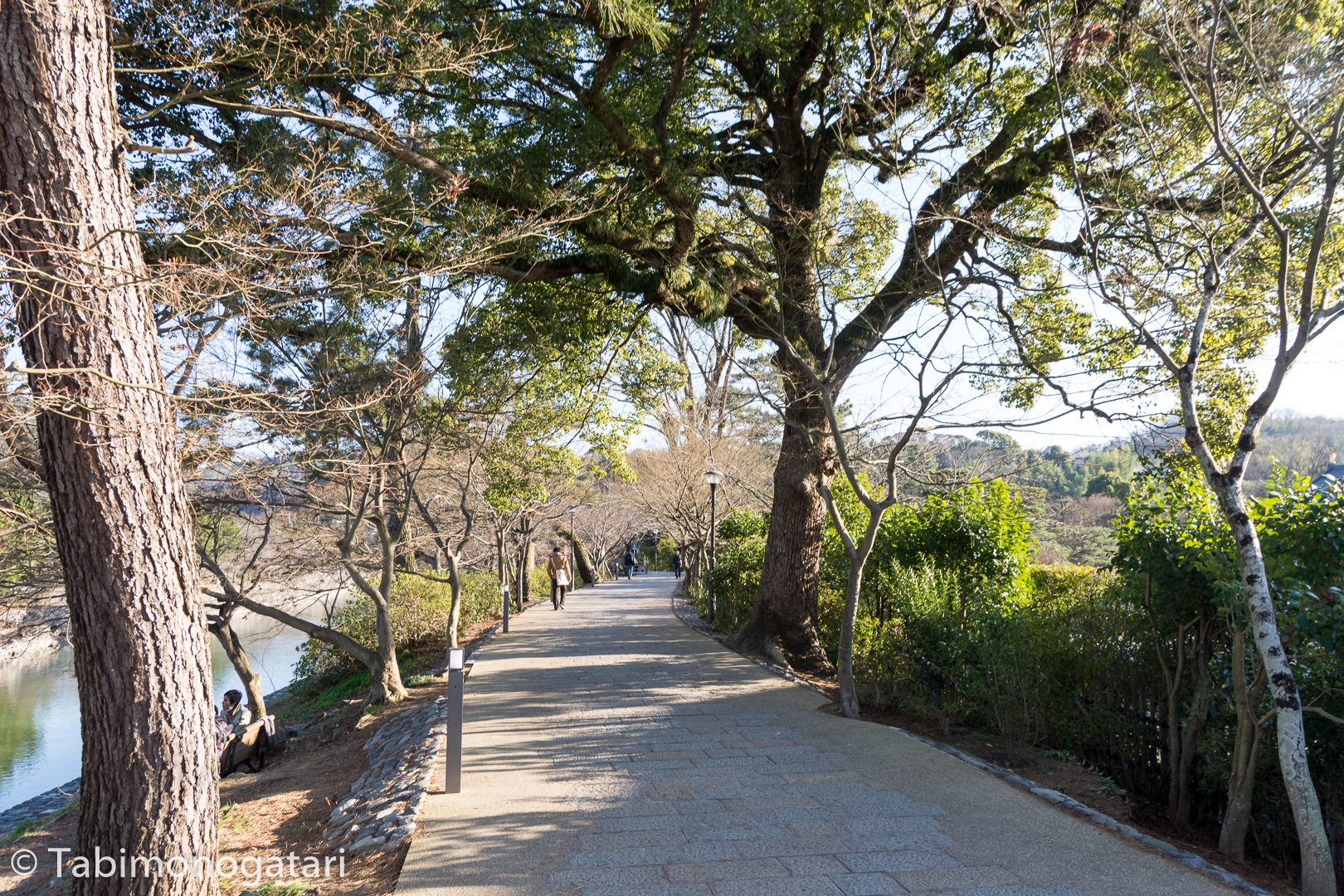 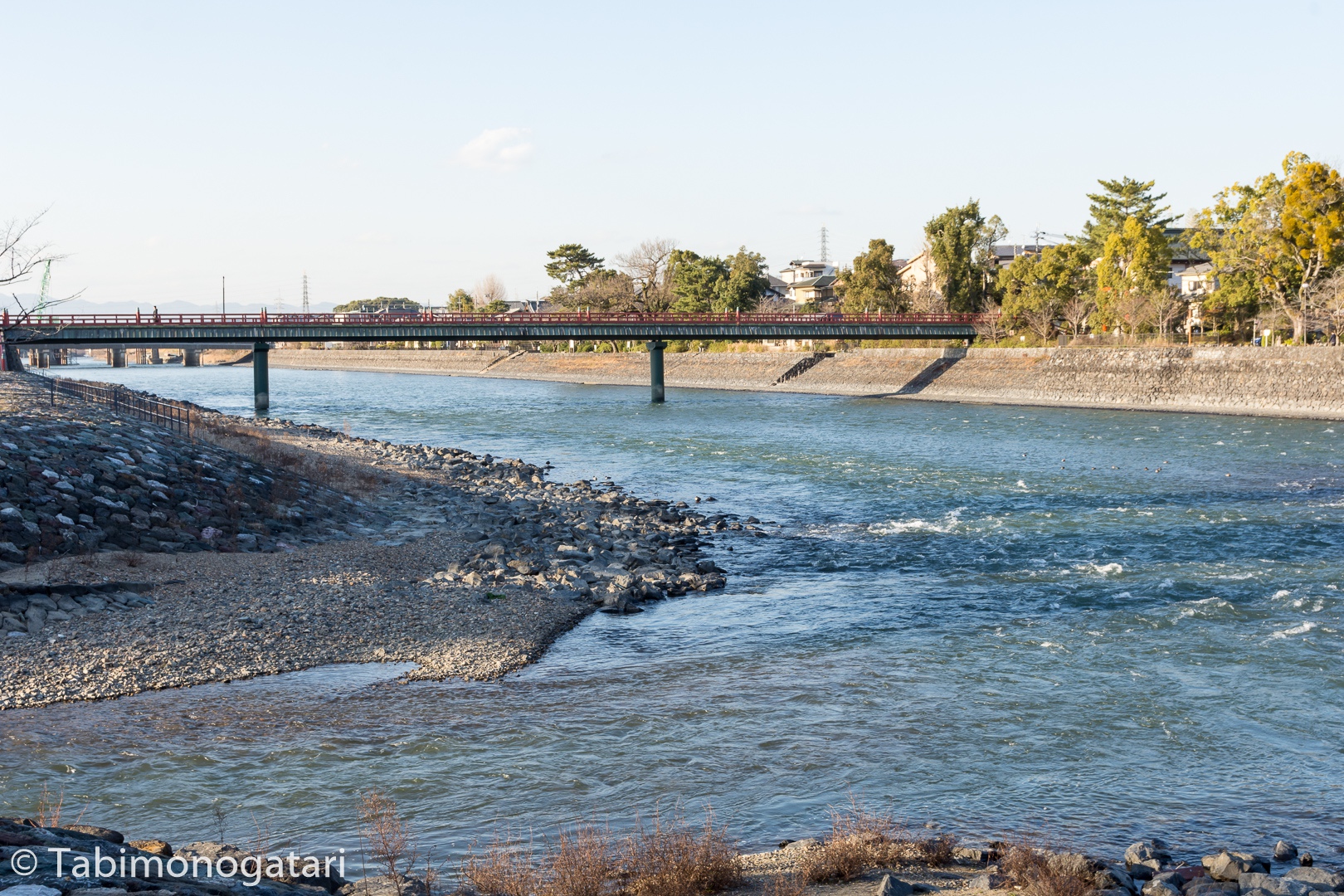 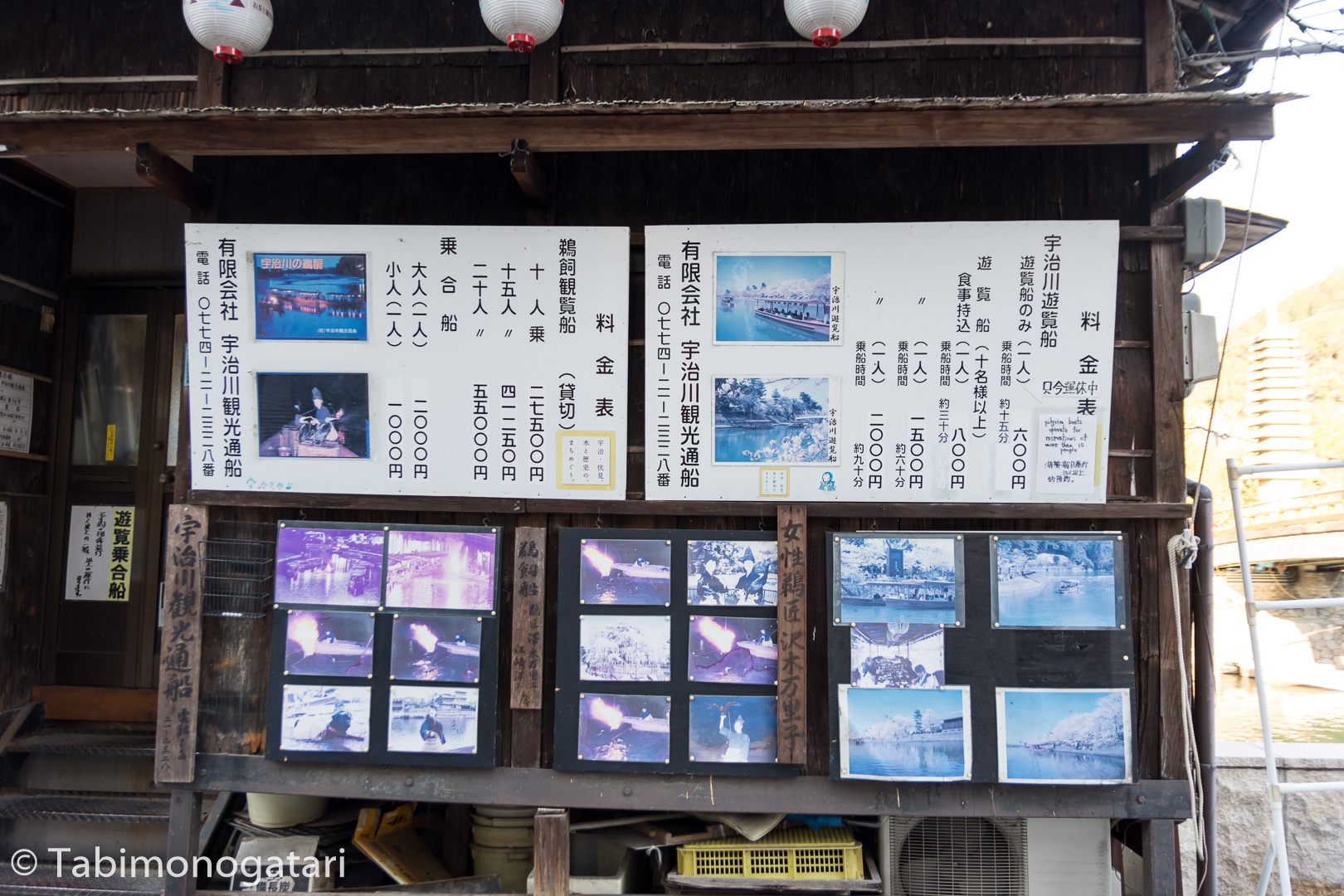 Luckily I could attend another concert, this time it was DAOKO performing in a club in Umeda. Amusingly, the club was located in the 10th floor of a typical building. As so often, the best places are hidden away in random buildings above ground level (I noticed that many good restaurants in cities are the same).

I was surprised to find that DAOKO performed in such a small venue holding maybe 200 people, given her popularity in Japan and abroad. Small concerts work a bit different than in Europe, with a mandatory drink fee being common. Also, there was no cloakroom but coin lockers.

DAOKO wore a white dress with feathers and a red circle on the chest, like a Japanese flag. With her band she performed several songs, amongst them two unreleased ones. Towards the end she also sang Uchiage Hanabi, one of my favorites. She seemed happy so many people gathered for her sake and her MC segments were sincere and funny.

Now having experienced the full spectrum from the smallest to the largest possible venue, I felt quite accomplished.

Afterwards I looked for dinner in Osaka station. Last year we ate at a tonkatsu restaurant in the South Gate Building and today I returned there because I liked it. This time they had a special menu with oysters, so I took a combination of tonkatsu and fried oysters. The meal was incredibly delicious and on top of that there was a buffet of rice, miso soup, salad and even curry. For 1900 yen (less than 20 €) I consider this a great value deal. 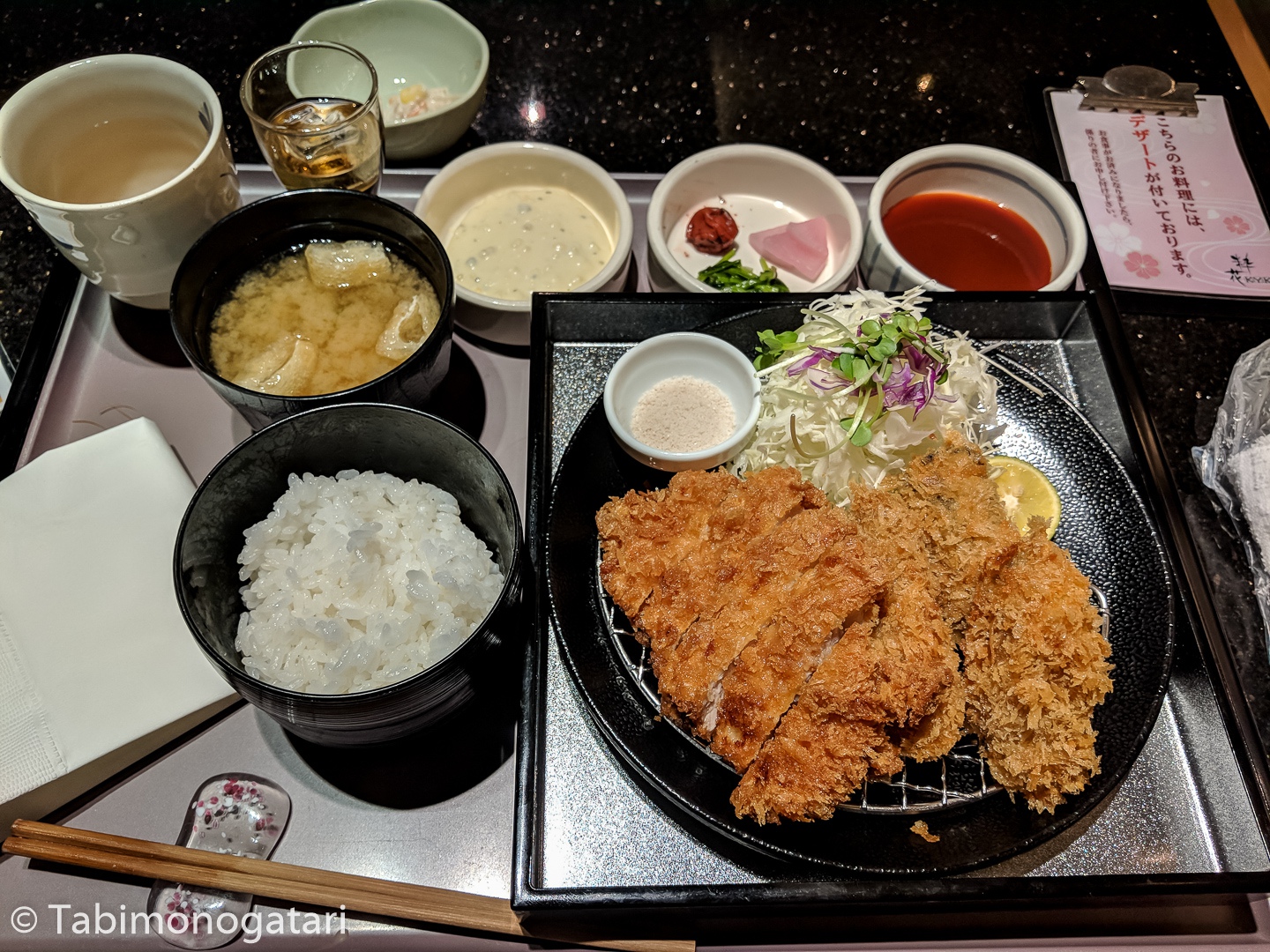 Finally I arrived at the hotel at 11. The next morning I will leave Osaka for Tokyo.