The last day in Tokyo was as busy as always with a visit to a Michelin star restaurant and the return flight the next day. Also, I had the chance to meet two old friends I have not seen in years.

With only a few days in Tokyo every trip and so many extraordinary restaurants out there I neeed to choose wisely where to go whilst in the metropolis. The Michelin one-star Ramen restaurant Nakiryu was a place I absolutely wanted to visit before leaving. As seating is limited, people queue up long before the opening.

From Otsuka on the Yamanote line it took just a few minutes to reach the inconspicuous restaurant, where only the Michelin stickers and the queue in front of it give away its status. Around 10 I arrived and found only two people waiting in front of the door. Later it turned out that the two were part of a group of six who later took the first seats. Little by little more people joined the line and at 11 there were about 30 people waiting. At 11:30 the curtain was lifted and the hungry guests were invited in. At that time the queue must have reached 60 people. The restaurant only has 10 seats, but I made it into the first seating.

Nakiryu must be the first star restaurant that uses a vending machine for ordering. Paying for and choosing the meal before sitting down is common at Ramen restaurants in Japan, and this restaurant decided not to change it after the award was given. Neither did they increase the prices for their renowned meals. 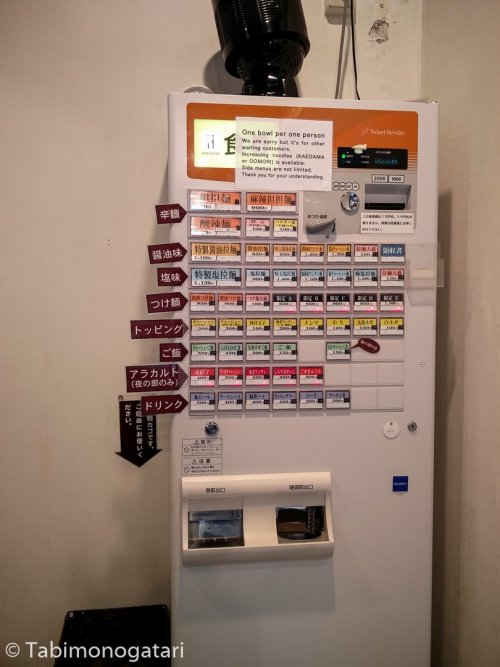 The selection was large, but I quickly decided to try the Tantanmen. In addition, toppings can be added according to taste, so I bought tickets for a boiled egg, chashu, coriander and menma. After sitting down I handed over the tickets, and the chefs started to prepare the broth and boiled the self-made noodles. To handle the work load four chefs were working in accord to skillfully prepare the ordered Ramen. 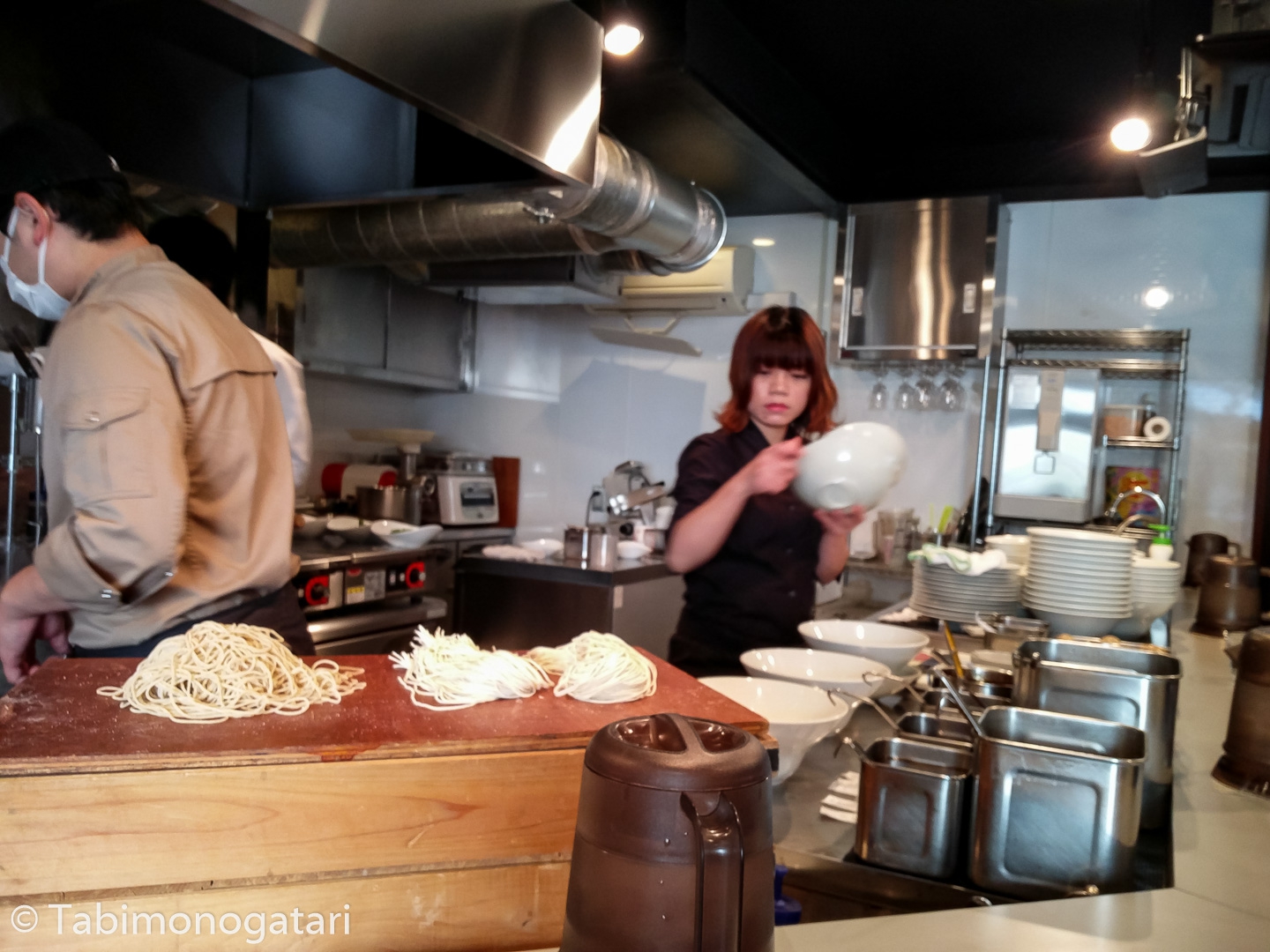 Then came the moment of truth. First I sampled the broth before starting to slurp the noodles and mix in the toppings. The broth tasted slightly sour in the beginning with a mild spiciness. Over time the broth developed its full umami flavor and I discovered crushed peanuts in at the bottom. The noodles were thin yet chewy and paired well with the broth. The egg was cooked to perfection and the chashu was so tender I could slice it with chopsticks. 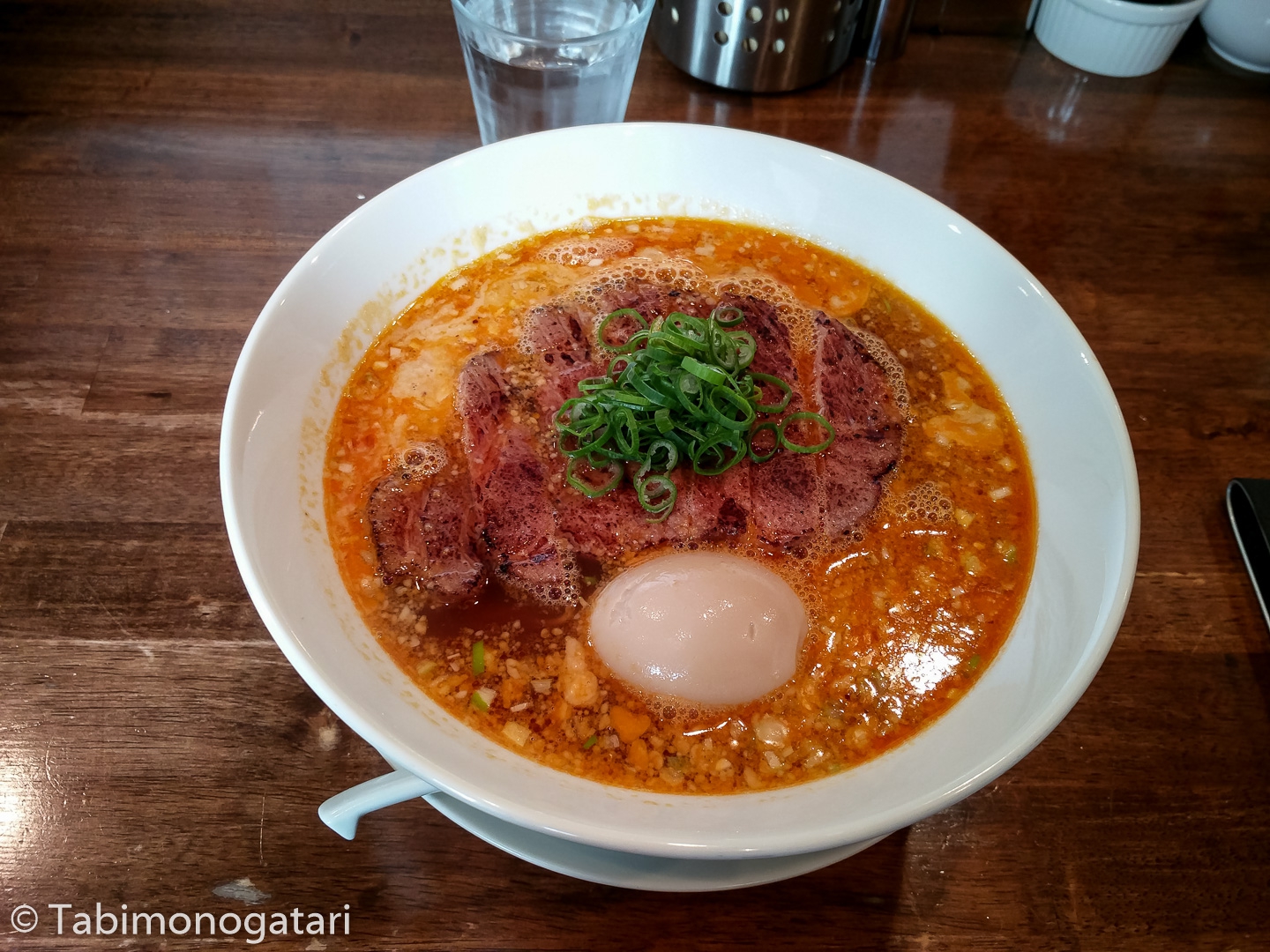 Long story short, that was the best Ramen I had in my life and the wait was well worth it. Some day I will come back and try the other offerings. Here is a review of the both the Tantanmen and the shoyu based Ramen.

In the afternoon I was happy to meet a good friend in Akihabara. Just the day before he texted me he would be in Tokyo over the weekend, so we made a plan. His name is Takuya and I met him four years ago in Nagoya at a concert. First, we went to see the Kanda Myojin shrine to finally do hatsumode, the first shrine visit of the year. 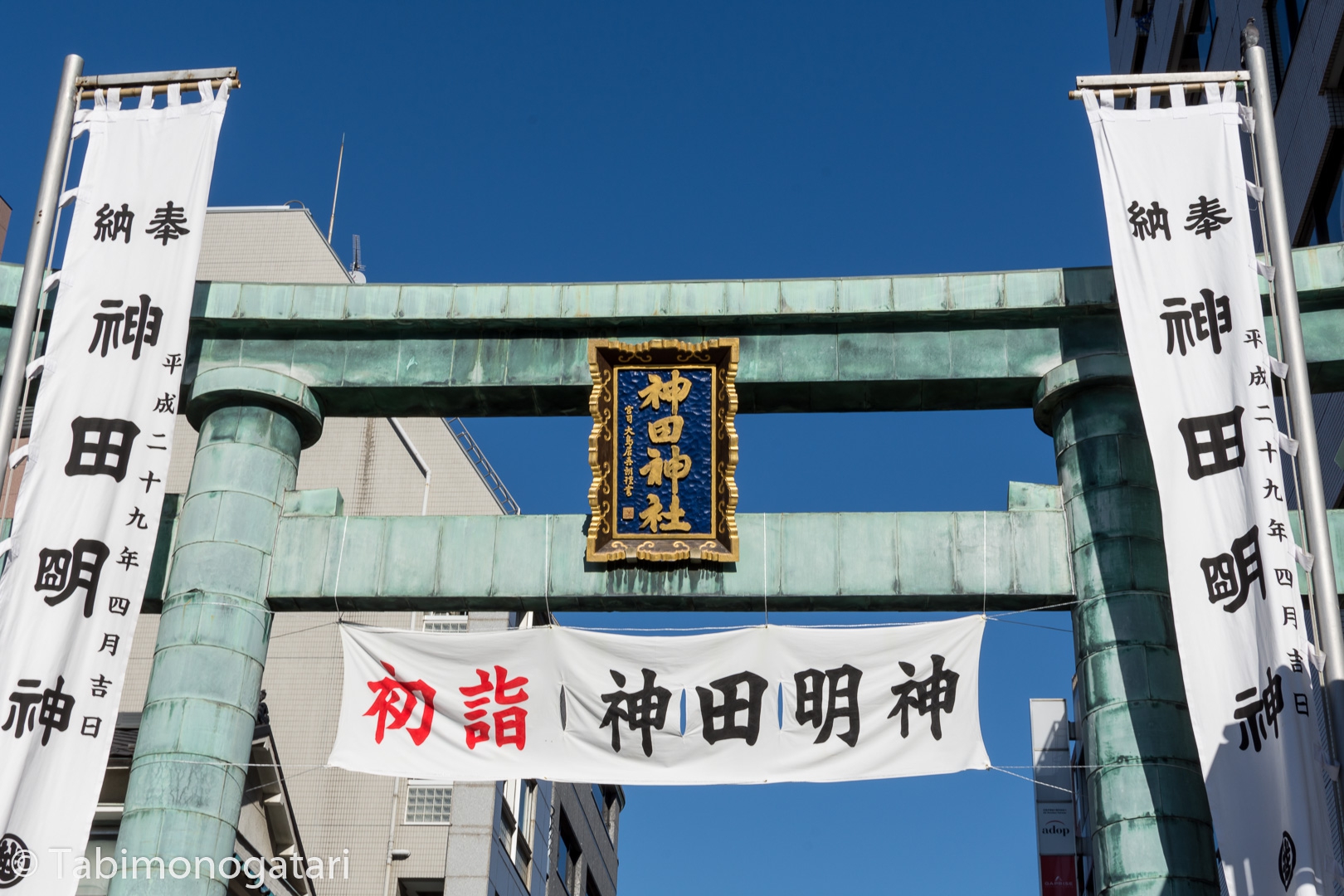 Since two weeks had passed since New Year’s Day I was surprised to see such a crowd on the temple grounds. People were lining up to pray, but it did not take much time until we made it to the front row. Next to the altar sat two figures who I assume were embodiments of the enshrined kami Daikokuten and Ebisu. When somebody offered a large coin or a bill they did a short dance. 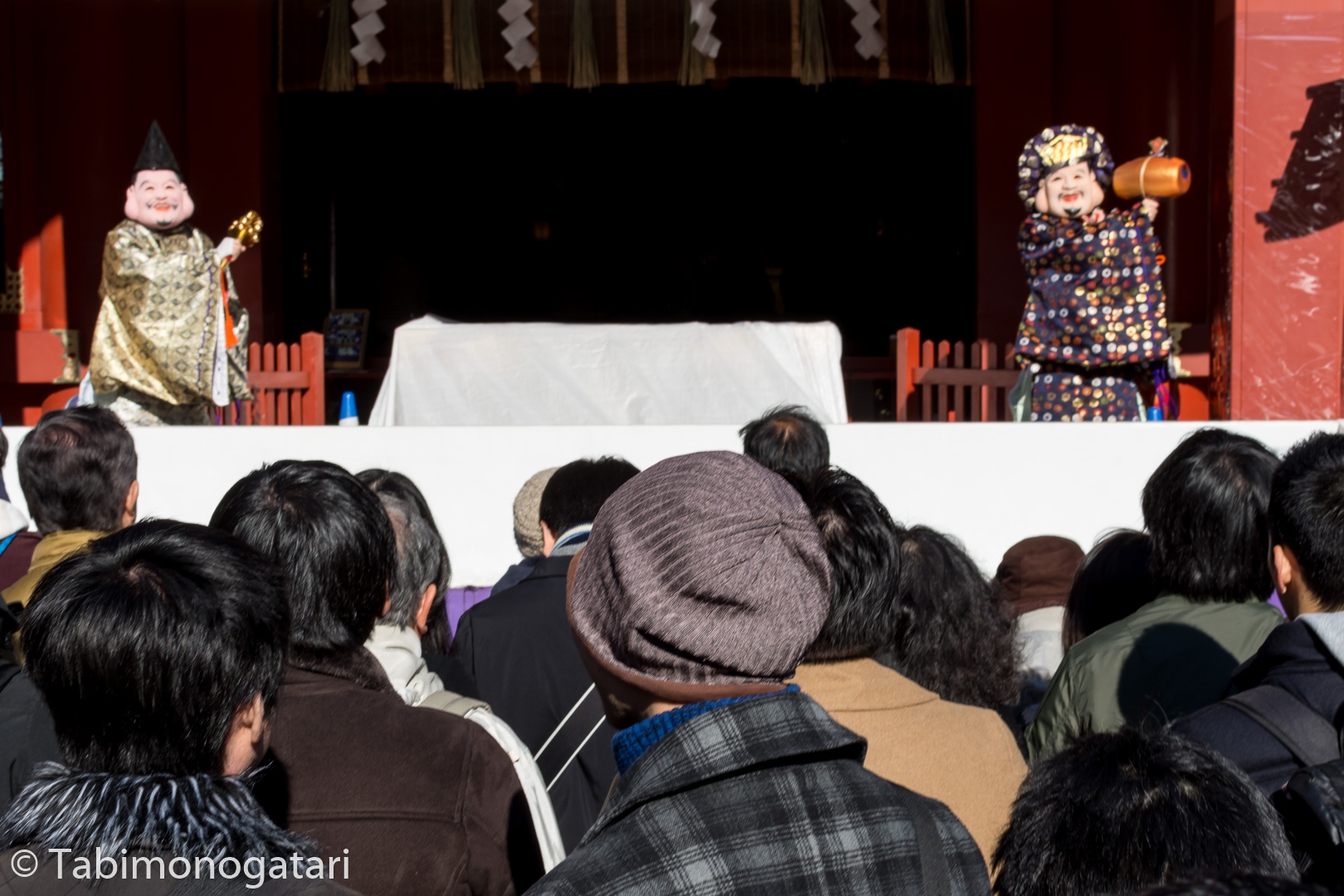 After praying for good fortune we went to receive a goshuinchou, which is a sort of stamp unique for every shrine or temple. 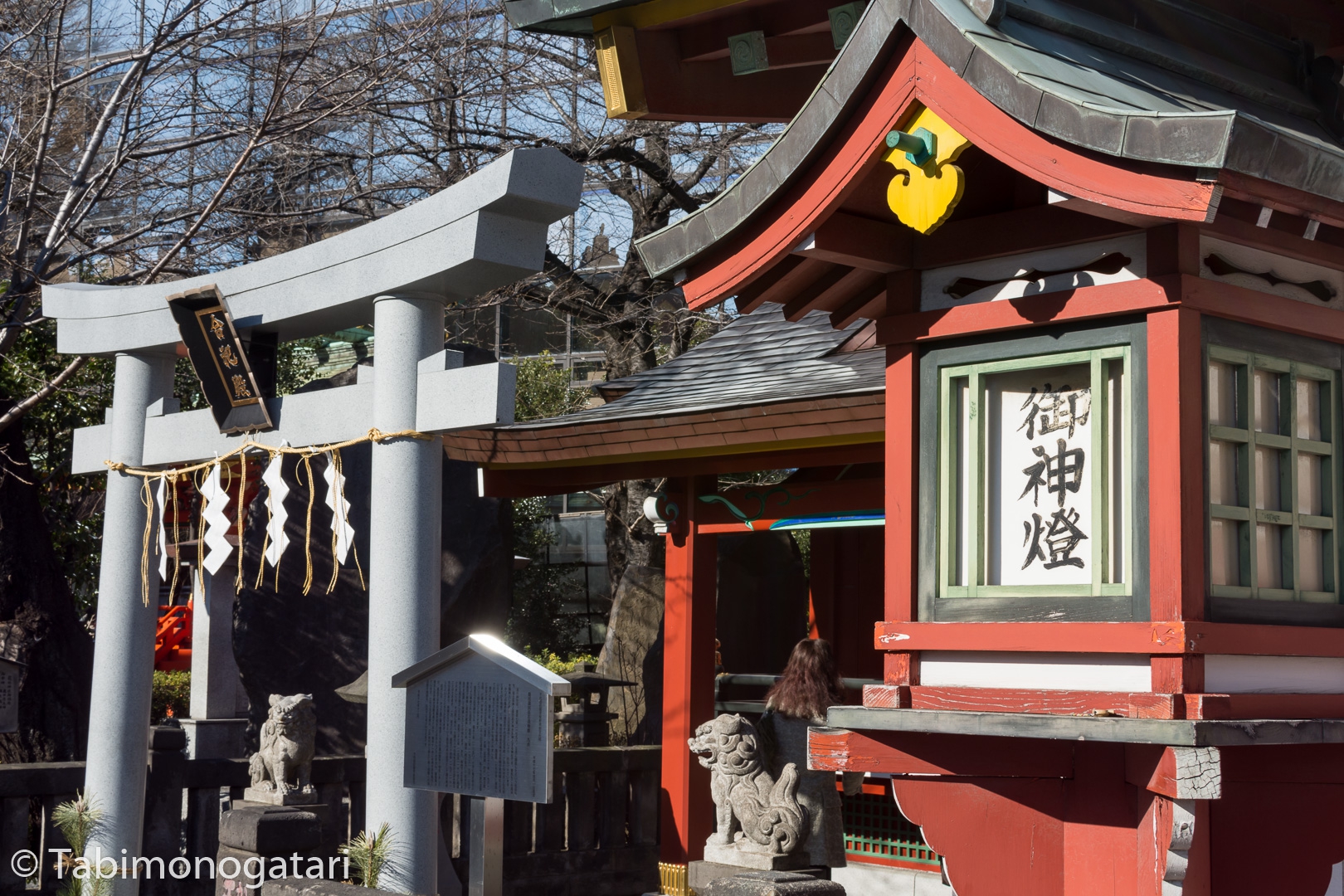 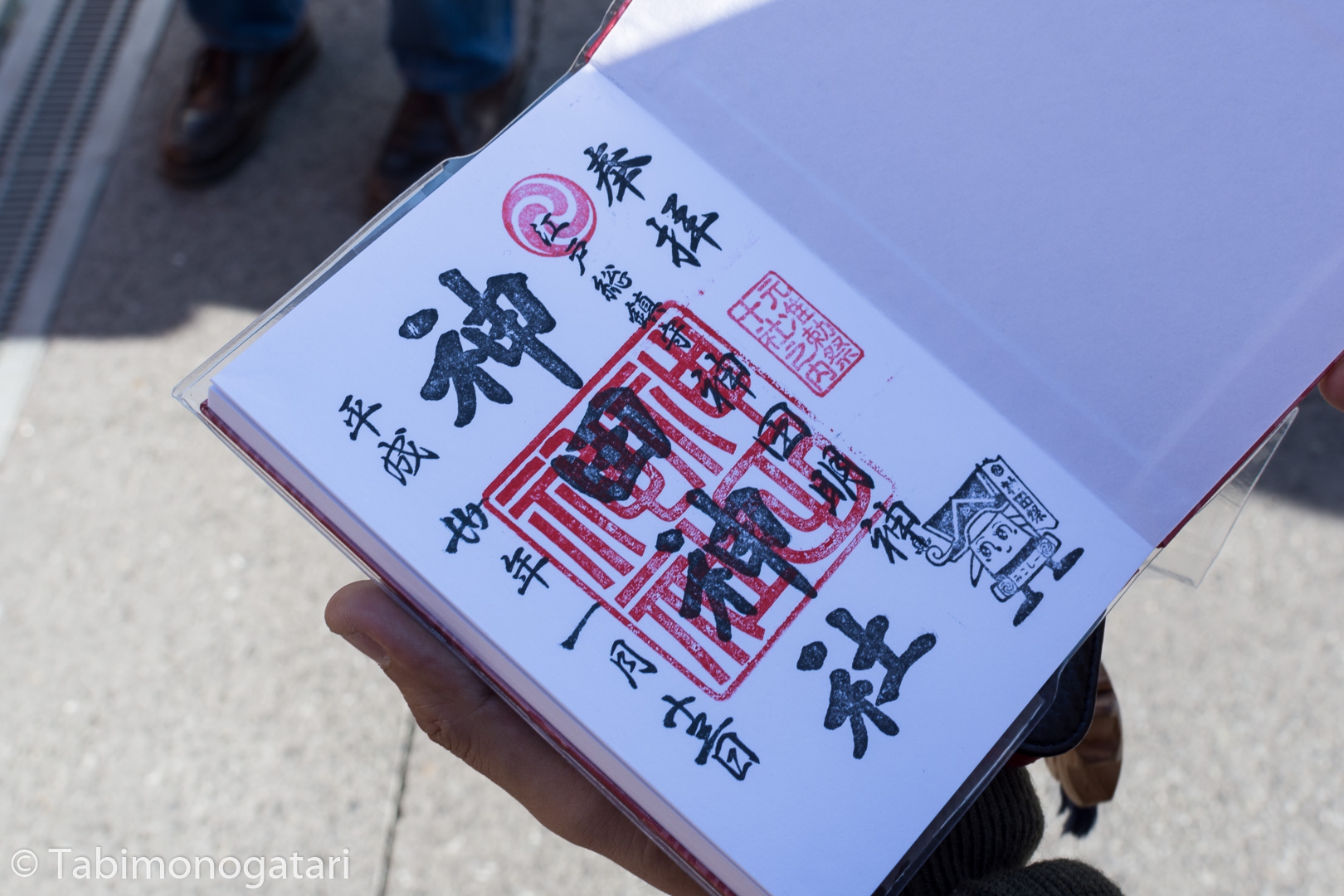 The next hours we spent in around Chuo-dori in Akihabara and visited various shops like Animate and Kotobukiya. 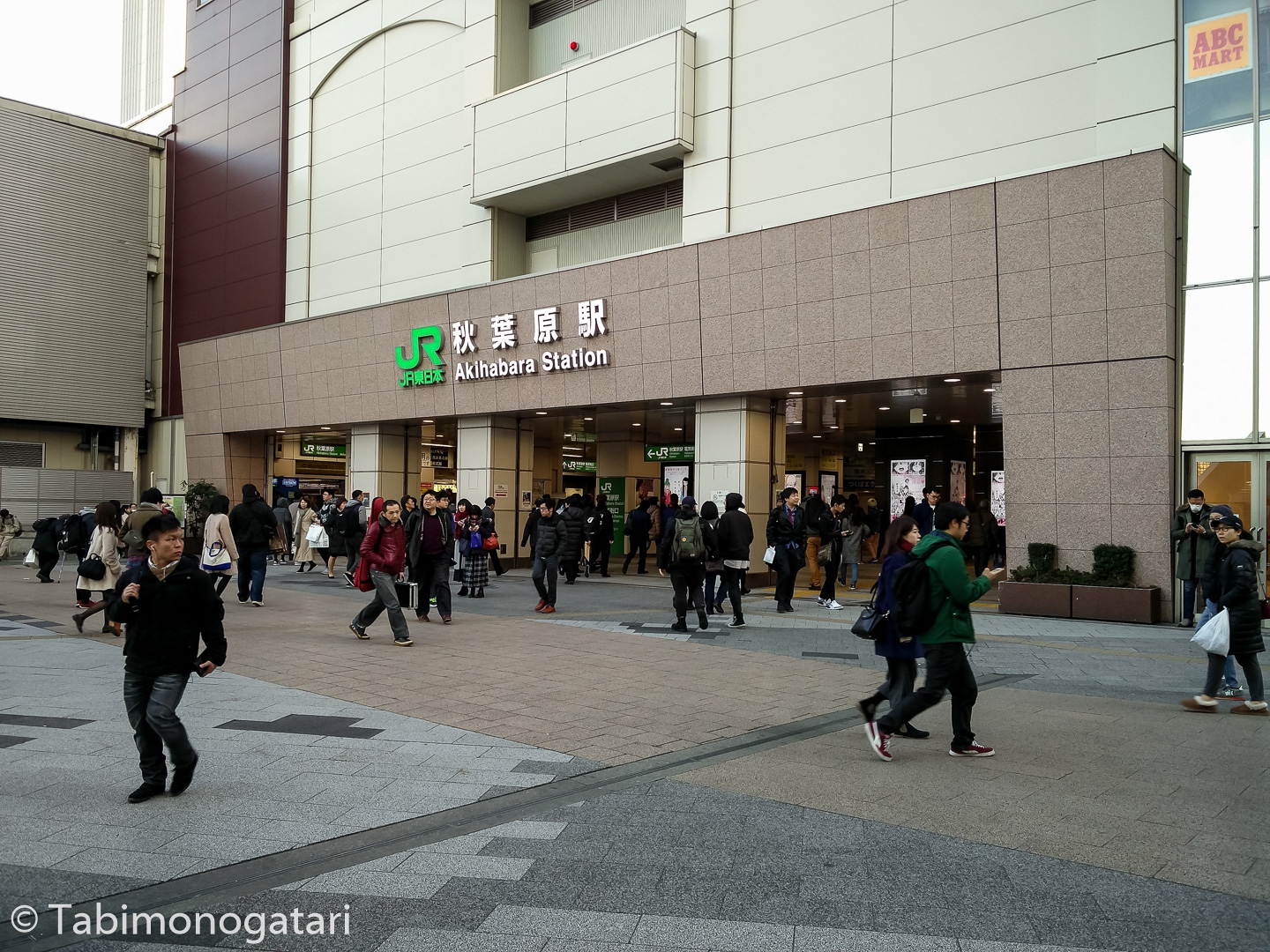 In the evening a good friend from Switzerland invited me home. He is married and living in Japan for two years now. With the train it took about an hour to reach him, since he was living in Saitama, north of Tokyo. We made Takoyaki ourselves and shared a bottle of Sake from Kanazawa I brought as a gift.

Before it got too late I returned to Tokyo, as my flight back to Switzerland was on the following morning.

With a morning flight there was not much time left, but I made the most of the last hours. Luckily everything worked out without trouble.

At 5:30 the silent vibration alarm waked me up, avoiding to wake up the other hotel guests. The public bath on the top floor was already open at this early time. The hot water helped me wake up fully and start into the long day refreshed. 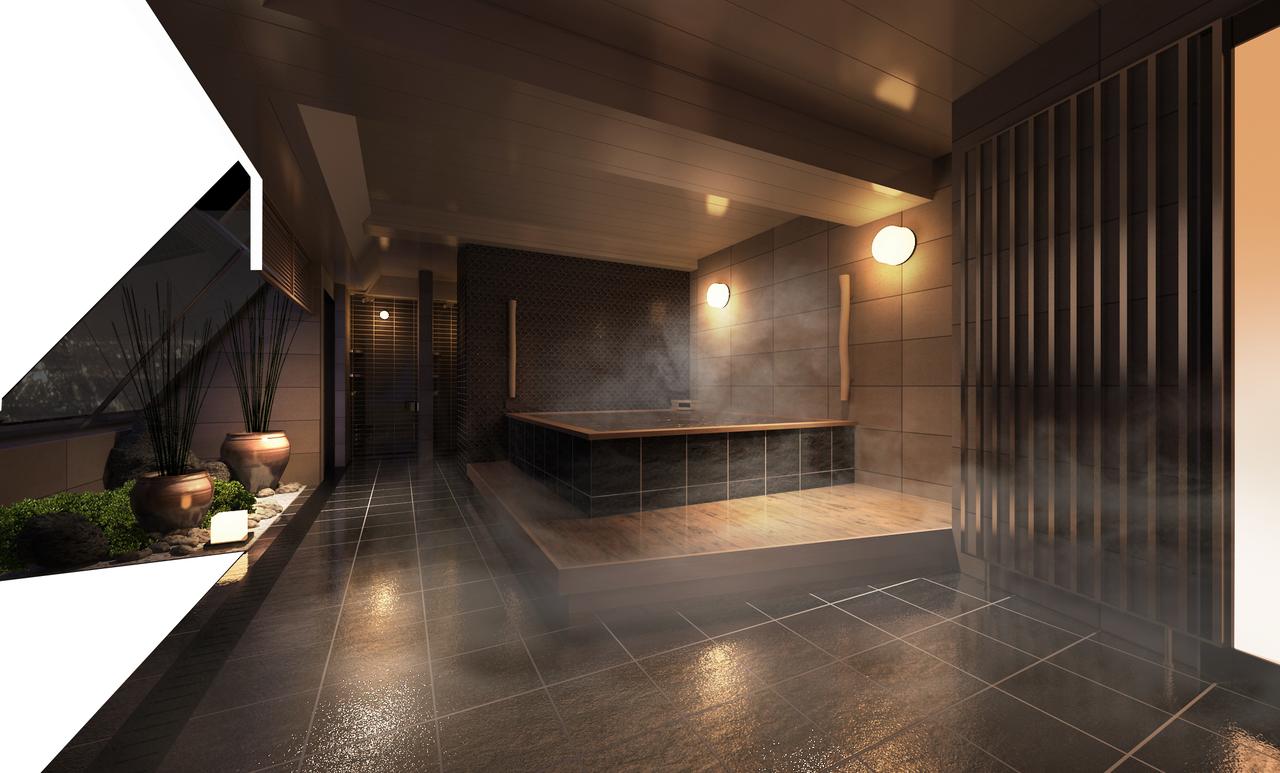 The space in the capsule was just large enough to open my suitcase and pack the last things. At 6:30 I left the hotel and visited the closest Yoshinoya branch in front of the station that is operating 24 hours. 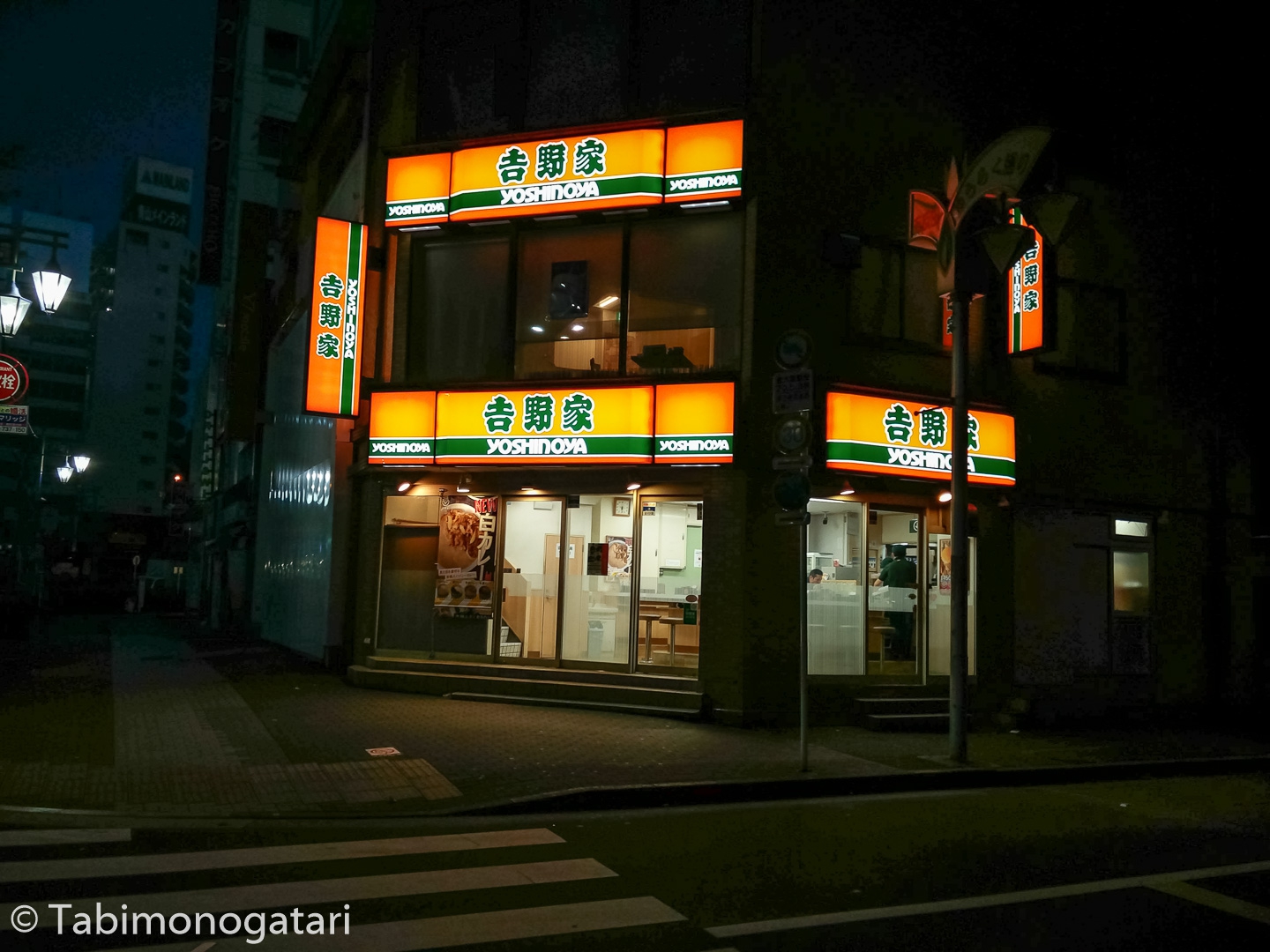 Two diners were there already when I came in, silently eating their beef bowls. Shortly after a drunk man came in annoying the staff with his rude comments. The waiter managed him well though, even though he clearly was annoyed. The menu offered countless options to customize the size, the toppings and the side dishes of their signature gyudon beef bowl. Eventually I went with a large bowl with extra spring onion and egg topping. 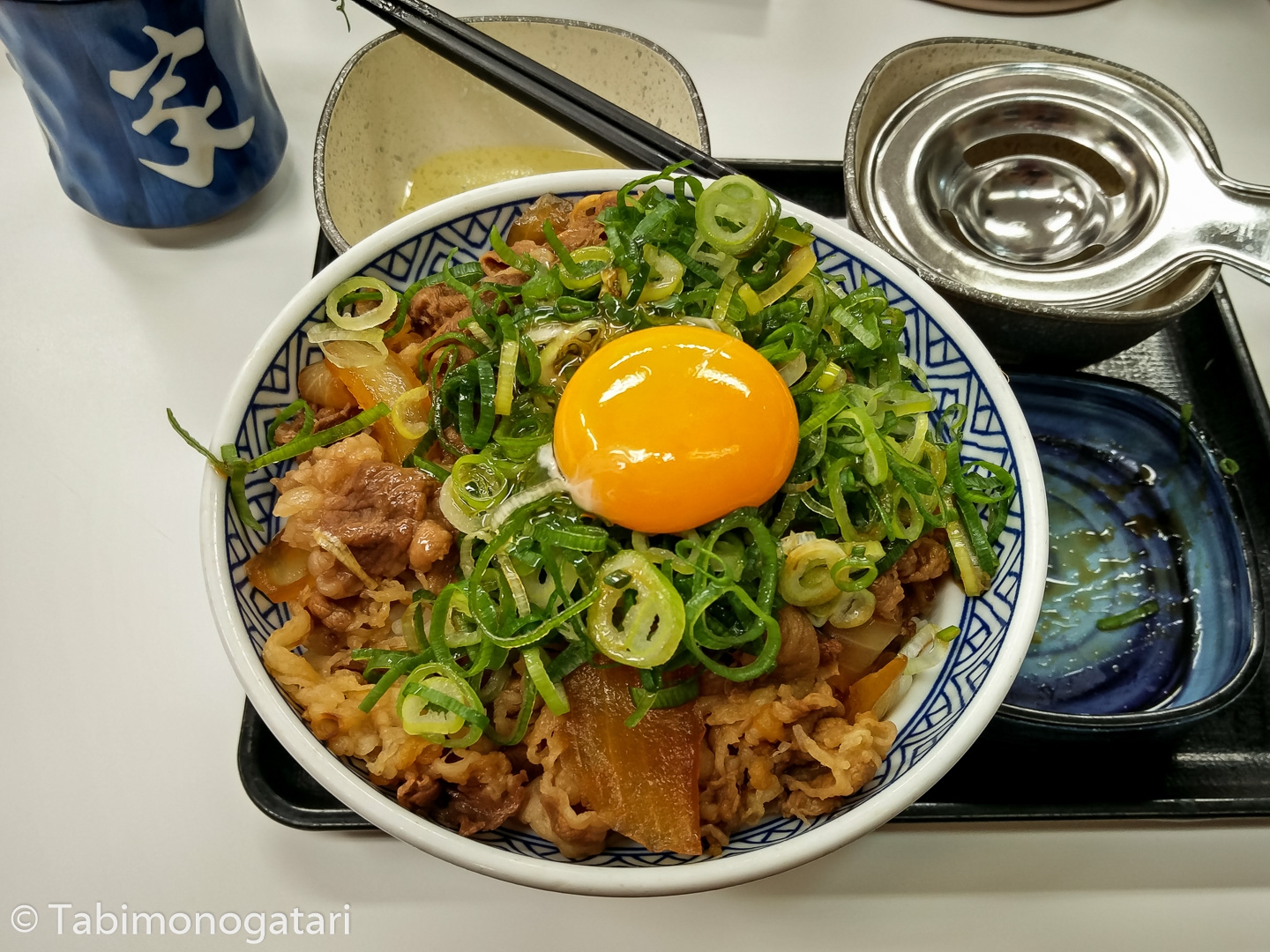 On the way back I visited the convenience store on more time to buy snacks and drinks, not for the journey but as souvenirs. My suitcase really could not fit anything more, so I resorted to an extra bag. The check-out at a vending machine proceeded flawlessly and after a cup of coffee I dragged my luggage to the station.

The return flight departed from Narita airport, located one hour to the East of central Tokyo. There are several options to access the airport, including several train and bus companies. So far I was content with the Keisei Skyliner departing from Ueno and the Narita Express from several JR stations, including Shinagawa, Tokyo and Shinjuku. This time, with no rail pass, I looked for an affordable yet comfortable option. The answer was Access Narita, a bus company that offers frequent departures from Tokyo Station without prior reservation for 1000 yen.

With the Yamanote line it took about 15 minutes to reach Tokyo Station and another five to reach the southeastern exit. The bus was equipped with WiFi and USB outlets, as well as a restroom. I was very happy with their offer and will consider them again in the future.

At 9 o’clock I arrived at Terminal 1, where I used up the last change to buy the popular Tokyo Banana sponge cakes and more drinks. Next, I picked up my second suitcase I sent to the airport a week ago by delivery. Needless to say, it arrived without delay. Somehow I squeezed some of the just acquired souvenirs into the second suitcase and headed to drop off both suitcases.

Without a rush I headed through security and emigration without trouble. As the check-in time came close, I joined the boarding queue. My return flight via Düsseldorf was operated by ANA and the aircraft was the Boeing 787, the Dreamliner. For me this was the best possible combination, so I chose this connection over a similarly priced direct flight. 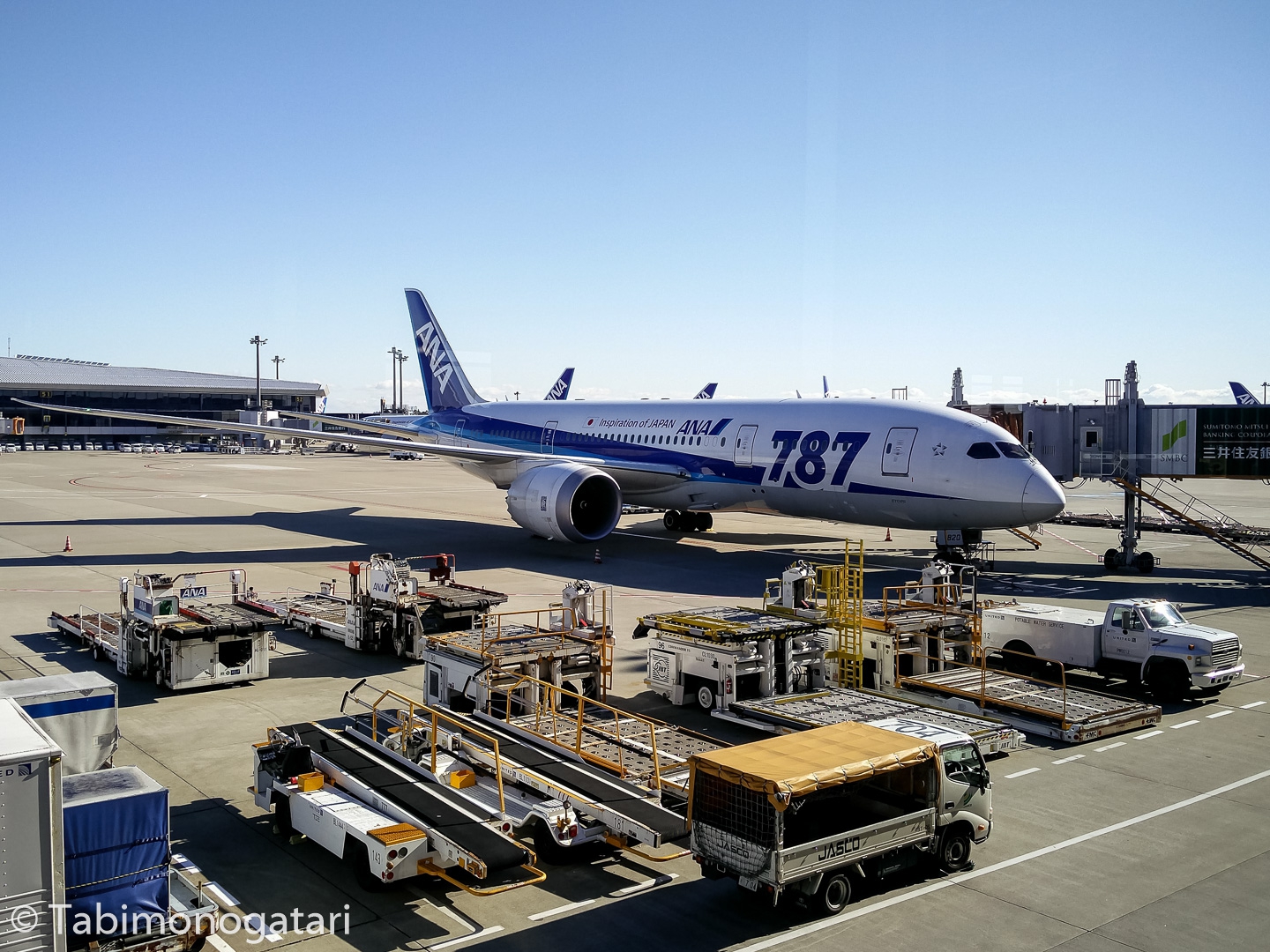 With a window seat in the front of economy class I already felt comfortable. When we departed, the middle seat remained unoccupied, what made the flight even more enjoyable.

The ambient lighting and the large dimmable windows increased the flight experience further. The 11 hour flight went by slowly, but with movies I could pass some time.

Soon after take-off Mt. Fuji was visible from the left side. Following the sun, we passed over the Japanese sea, crossed parts of China and flew over Russia for the most time of the flight. Although it was a day fliht, we needed to darken the cabin for six hours. The windows could be dimmed in several levels, offering a great photo opportunity. 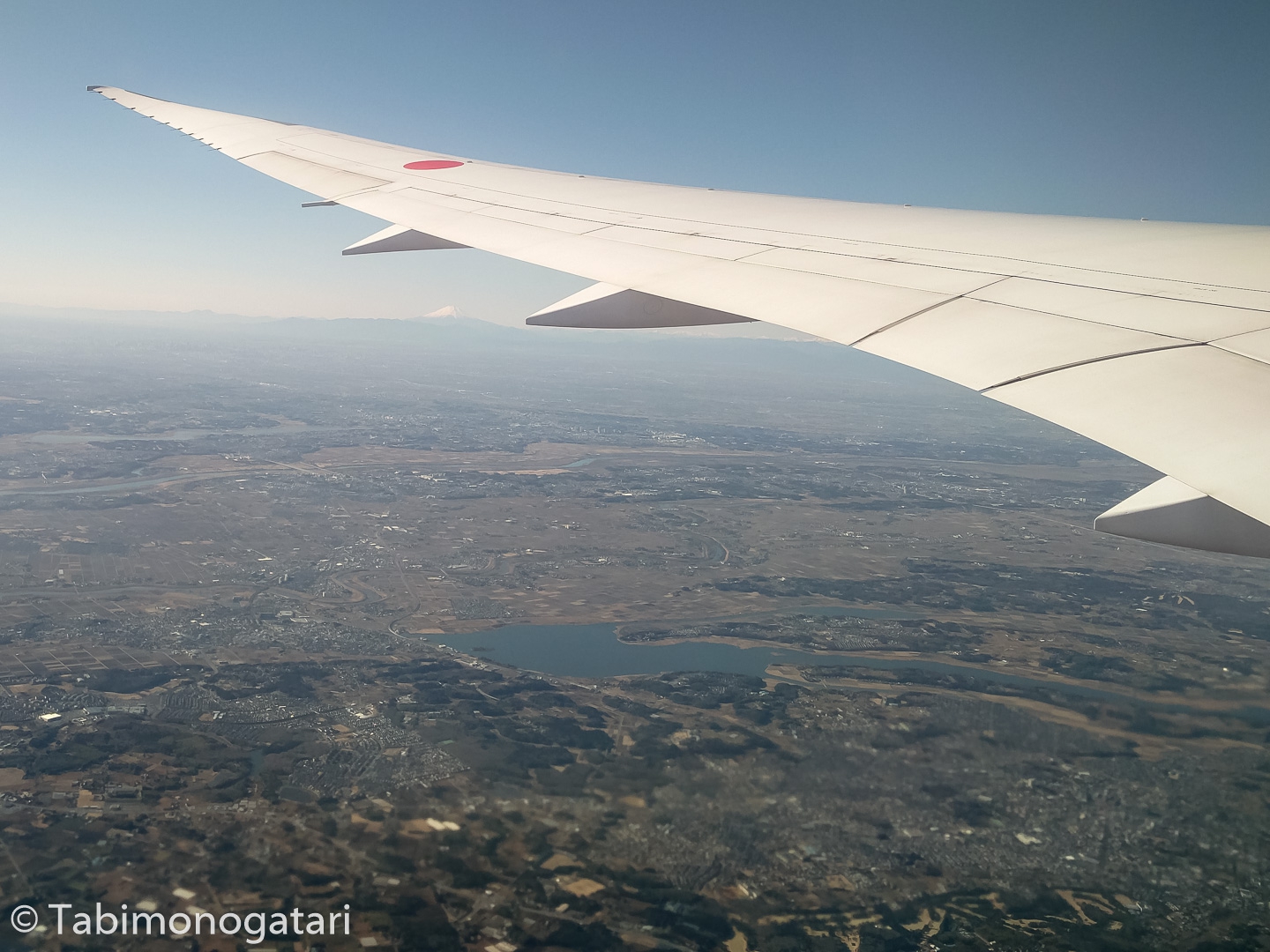 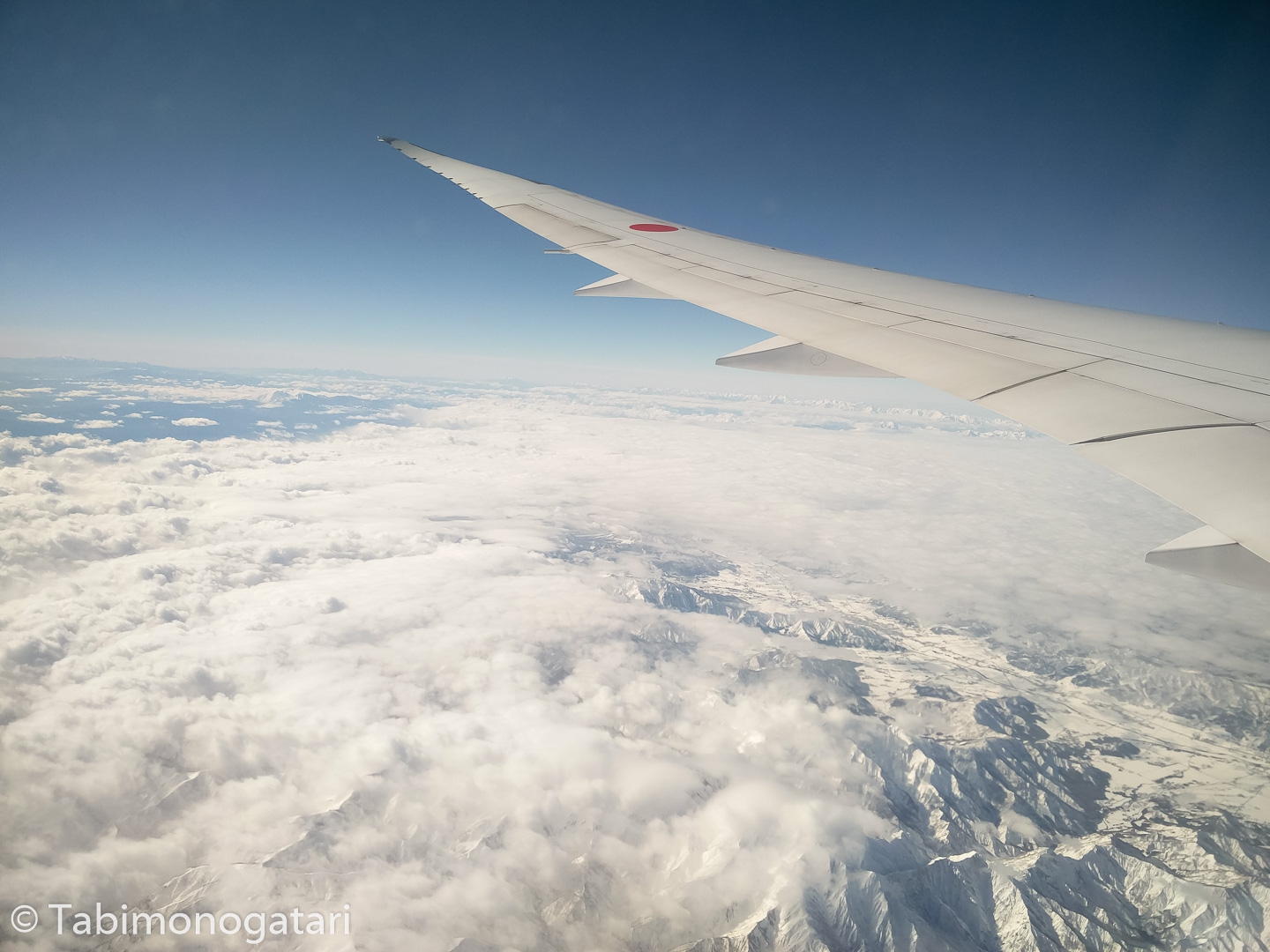 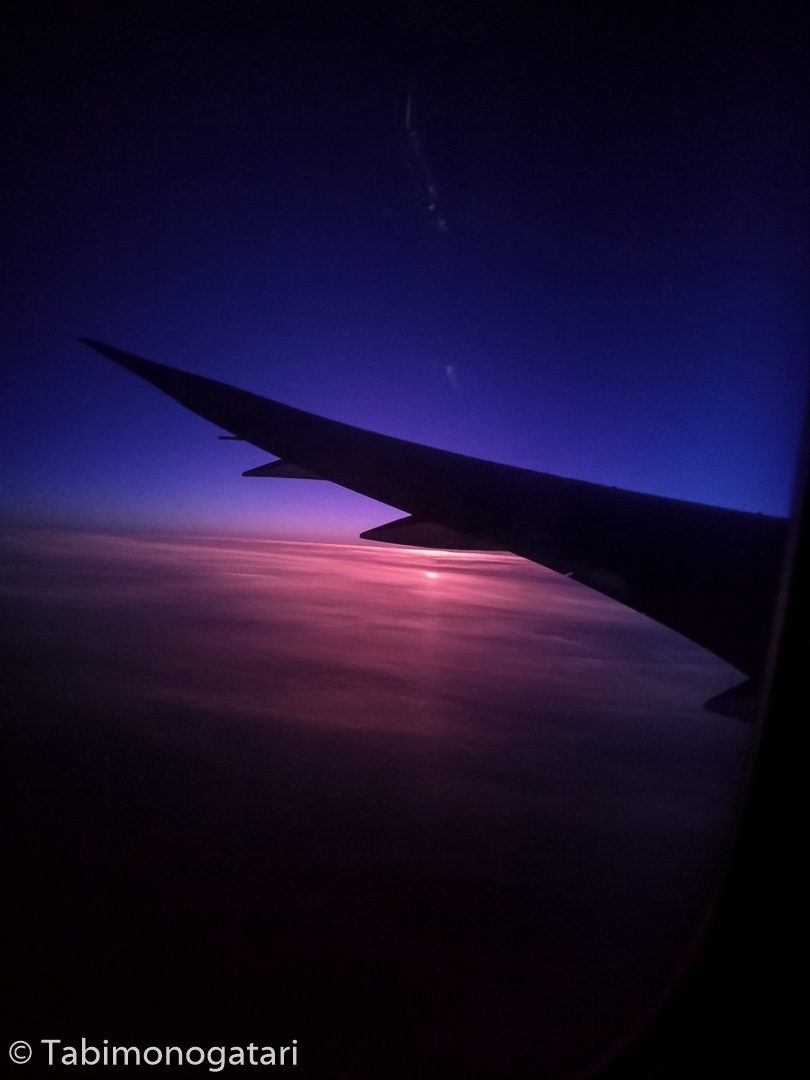 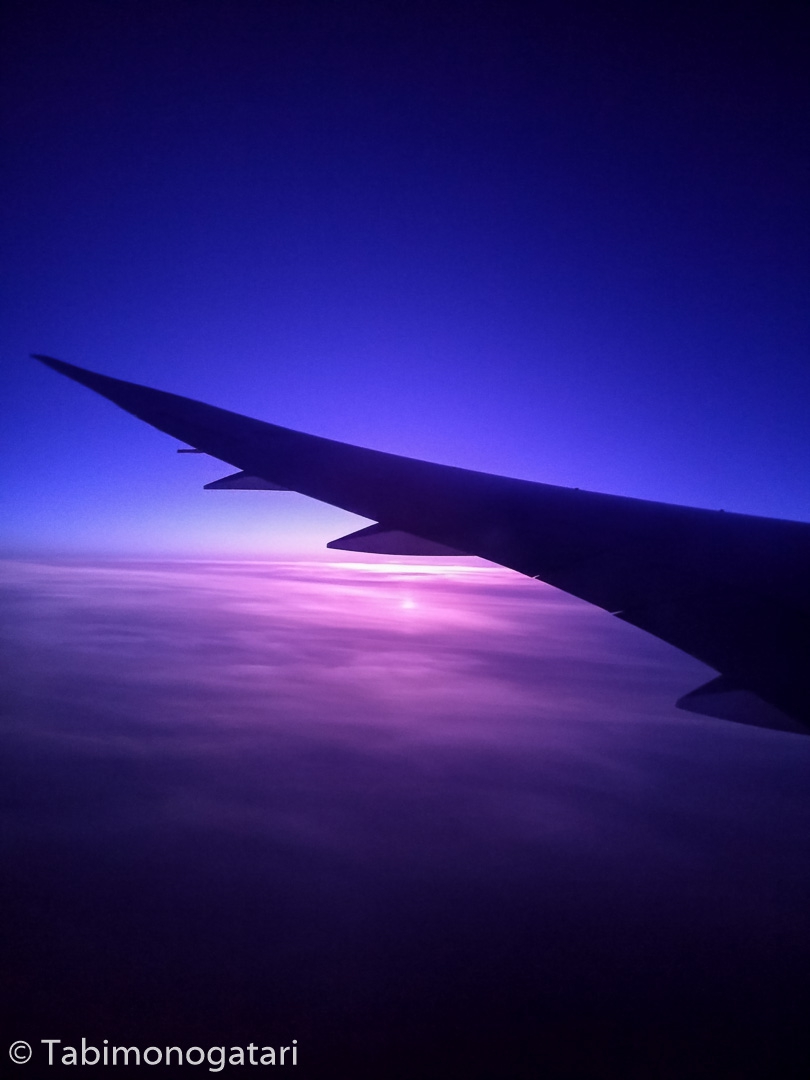 In the afternoon of the same day (in the new time zone) we landed in Düsseldorf. The airport was not busy at that time, but we had to queue a long time anyway, because we needed to pass a security check with a single lane. At that point I needed to throw away the PET bottles I bought in Narita, which was a shame.

The second lag was operated by Eurowings and when I saw the aircraft I had to smile, because in front of us was an Air Berlin branded jet. The company went insolvent recently, but it seems the planes were not rebranded yet. The aircraft was among the smallest I have been in with only four seats in a row. 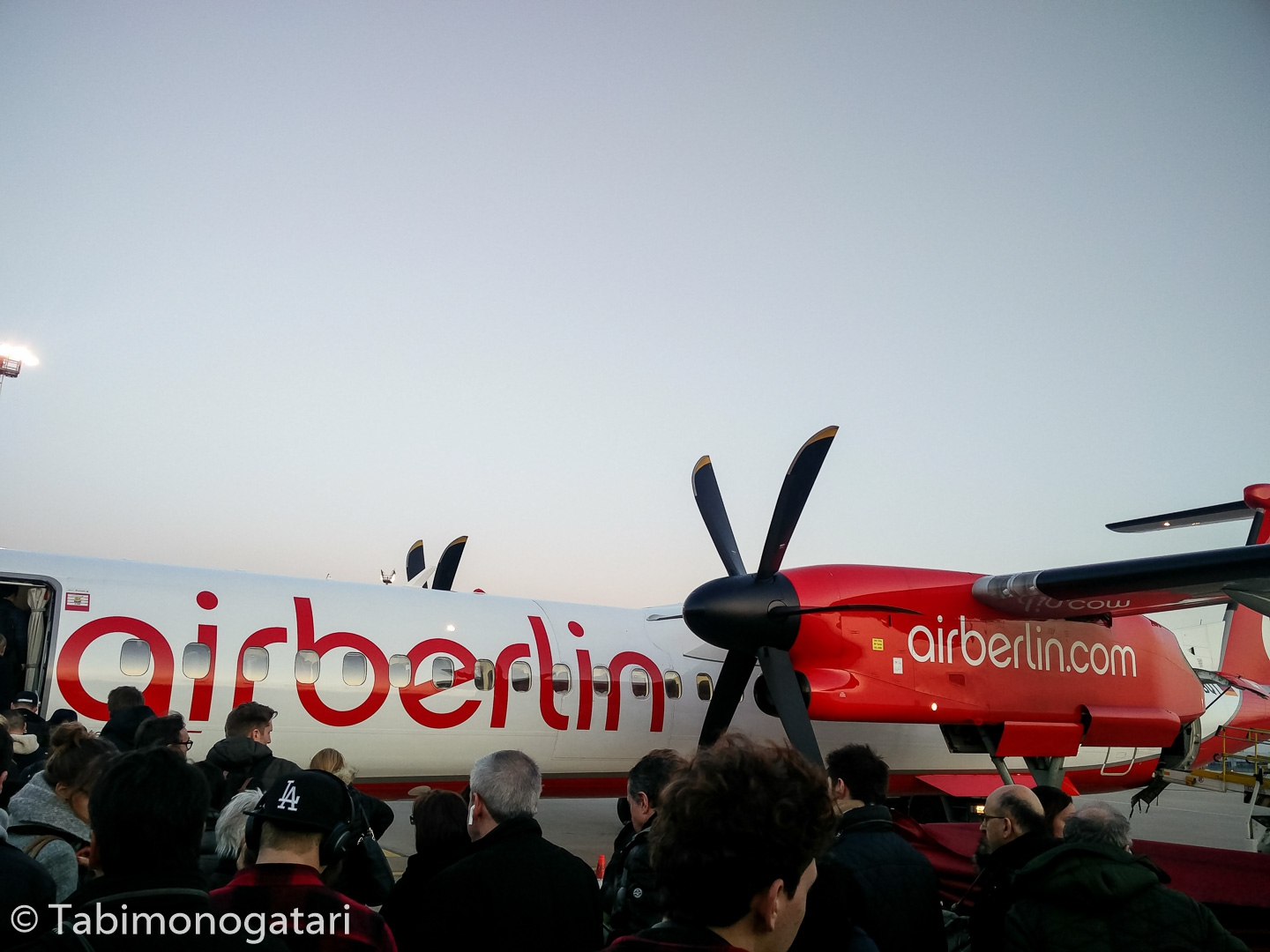 In the air one could see Düsseldorf and later also Frankfurt pass by. An hour later we landed in Zürich where my girlfriend kindly picked me up.

This was the last travel log of this trip. However, this will not be the last article in this series. I plan to publish another article summarizing the trip, which might take a bit longer. Until then: Thank you for following this travel log and I hope I could spark some inspiration about what to see and do in Japan.