After four days in the capital it is time to move on to a different part of Japan. The next destination is the southern tropical islands of Okinawa. Specifically, I will spend the next three days at the main island of Okinawa.

When traveling abroad there are many things quite different from home. Unfortunately, I do not have the time to report about many funny or curious events, but here is an example:
When a train is about to arrive a short melody plays which differs from station to station. Sometimes there are quite familiar chimes mixed in like the main theme of Arielle and the Phantom of the Opera which I recently heard in Tokyo.

It is certainly not the best idea to try to get around with luggage during rush hour. Still, I had no choice but to do so in order to reach my flight to Okinawa. Every two minutes a train arrived at the station, always packed with people. With two parallel train lines every minute a train arrived. After skipping five trains I managed to enter one car with a free spot. When reading about Japan you often hear the rumor that the station staff pushes commuters into the train so that the train can depart without delay. While I have seen that happening before it is usually not necessary and therefore is rarely practiced. 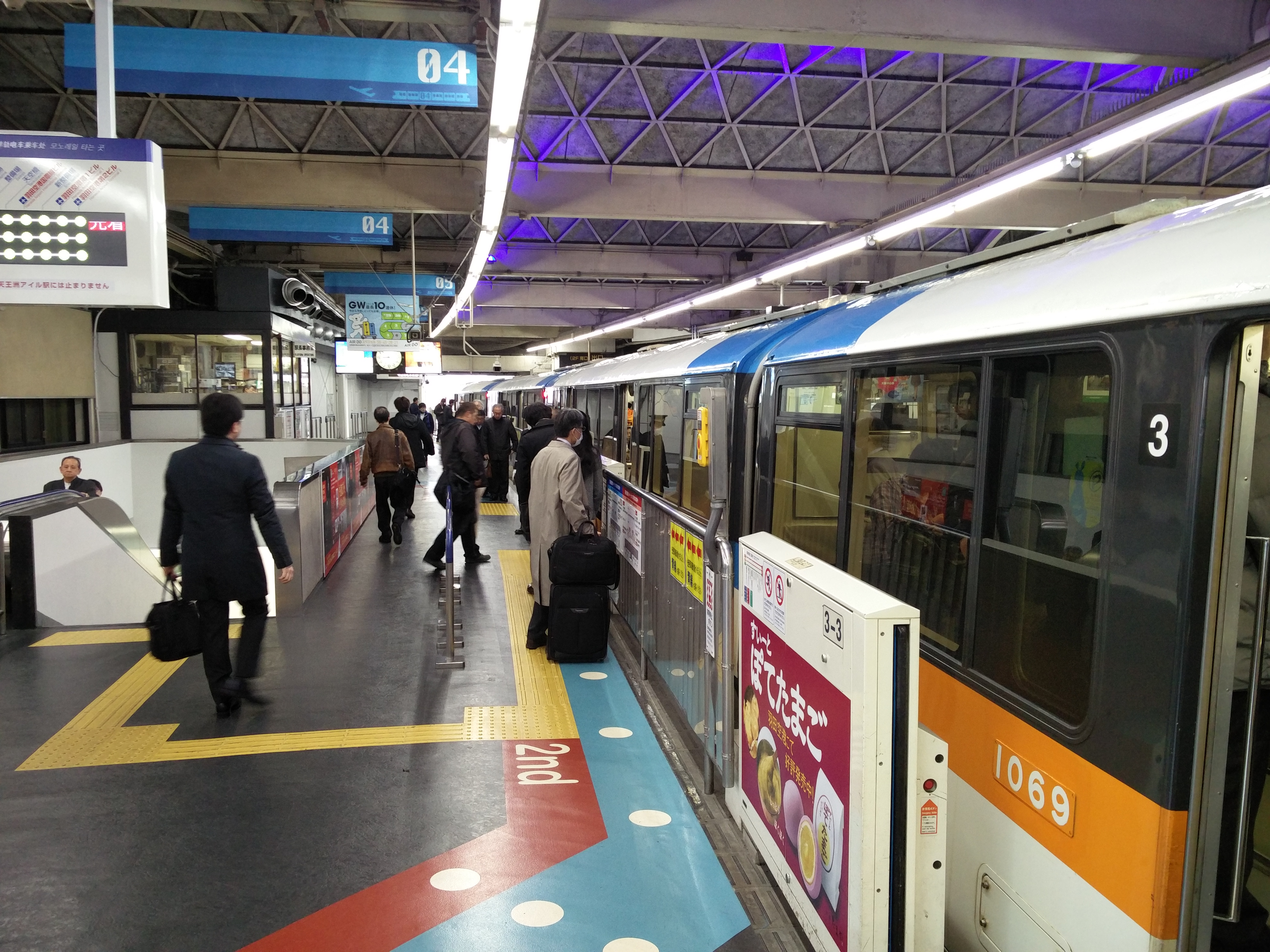 With the Yamanote line and the Monorail I reached the airport in half an hour. First I checked my big backpack, then opted for a late Japanese style breakfast. While the western style including bread and coffee is almost predominantly nowadays the teishoku variant is a great way to stay on the day if there is enough time to prepare it in the morning. Typically, such a meal consists of fried salmon, a bowl of rice, miso soup, and pickled vegetables, accompanied by tea.

This morning the weather looked rather gloom since it was cloudy and it would probably rain soon. When we ascended above the clouds the sun reminded me of what to come in tropical Okinawa. The flight station was two and a half hours. From the window seat I could watch the wide ocean below us.

In Naha, the capital of the prefecture and the islands, it was sunny at 20 °C when we arrived. Compared to the 10 °C of the last days that was a welcome change. Later I watched television and heard about a terrible hail storm in Tokyo. What a great timing, at least for me.

To make some quick points about Okinawa in general, the name means rope in the open sea, which describes the shape of the long stretched islands well. As it is over 600 km southbound of central Japan, it is not surprising that a different culture developed. This culture was also heavily influenced by the military bases of the US since the end of the second world war. Okinawan Japanese seems to be an entirely different language, Japanese people I asked told me. In fact, at least the greeting is quite different from high Japanese – mensôre means welcome (yôkosô) to example.

We landed and moved on to the baggage pickup area when I noticed this special Pokémon themed plane. Such sightings trigger my ‚only in Japan‘ feeling and make my trips even more worthwhile and enjoyable to me. 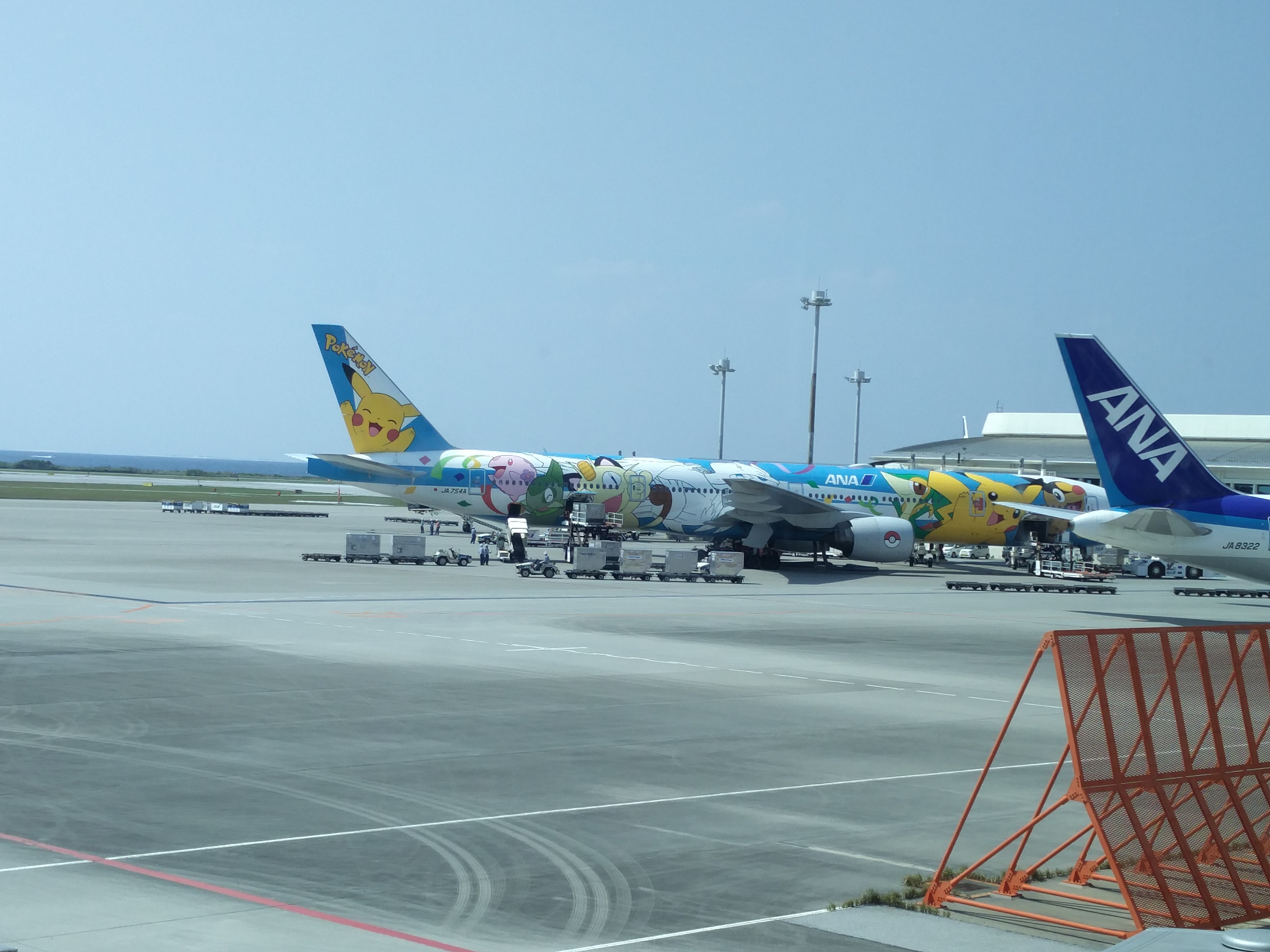 I decided to have lunch at the airport and use the first chance to try the cuisine of Okinawa. The ordered dish was goya chanpuru, which I tried making on my own on my first visit to Japan (Link). The cucumber variant goya is bitter but fits together great with the other ingredients. Other local specialties include soki soba, taco rice, and the sweet potato tartes. Please try them out when you come here. 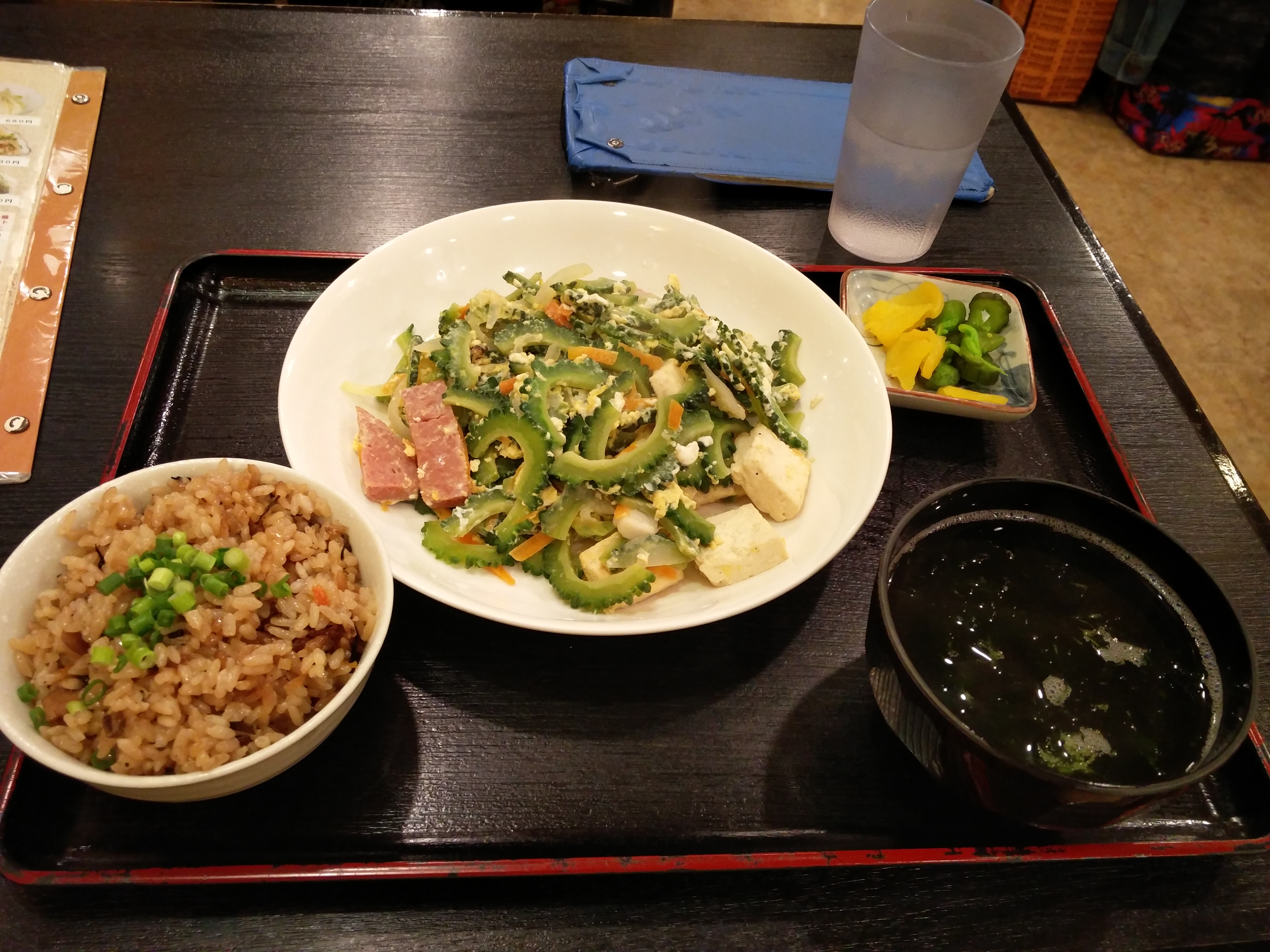 With the local monorail it took me ten minutes to reach my next accommodation, again an Airbnb. The flat was bigger than my last one and was more comfortable, too. After a short break I headed out again to visit the Shuri Castle, one of the top sightseeing spots, telling of the history of the Ryukyu kingdom. Before Okinawa became part of Japan it was an independent kingdom with many trade relations. The architecture of the rebuilt castle is reminiscent of the Chinese architectural style. 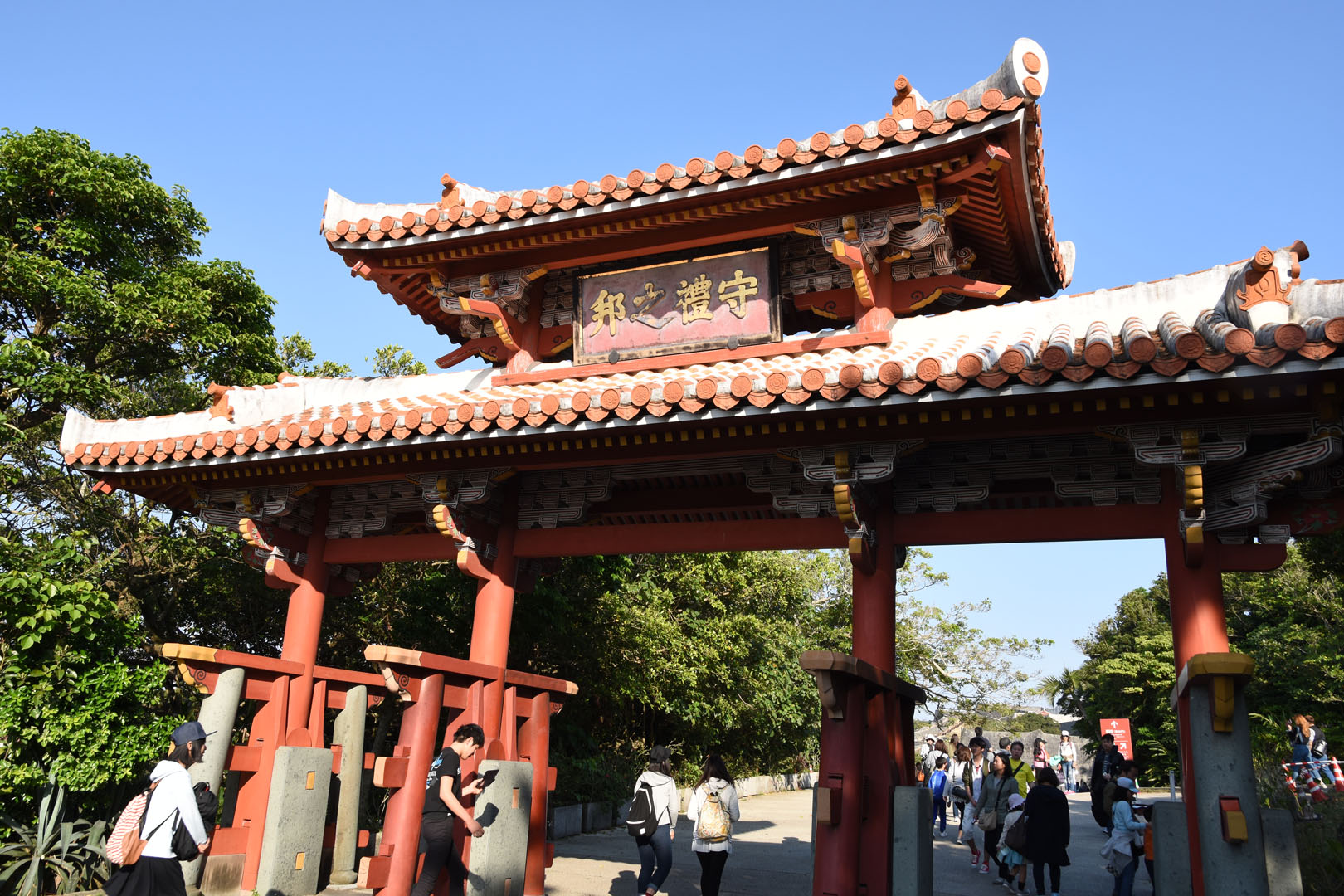 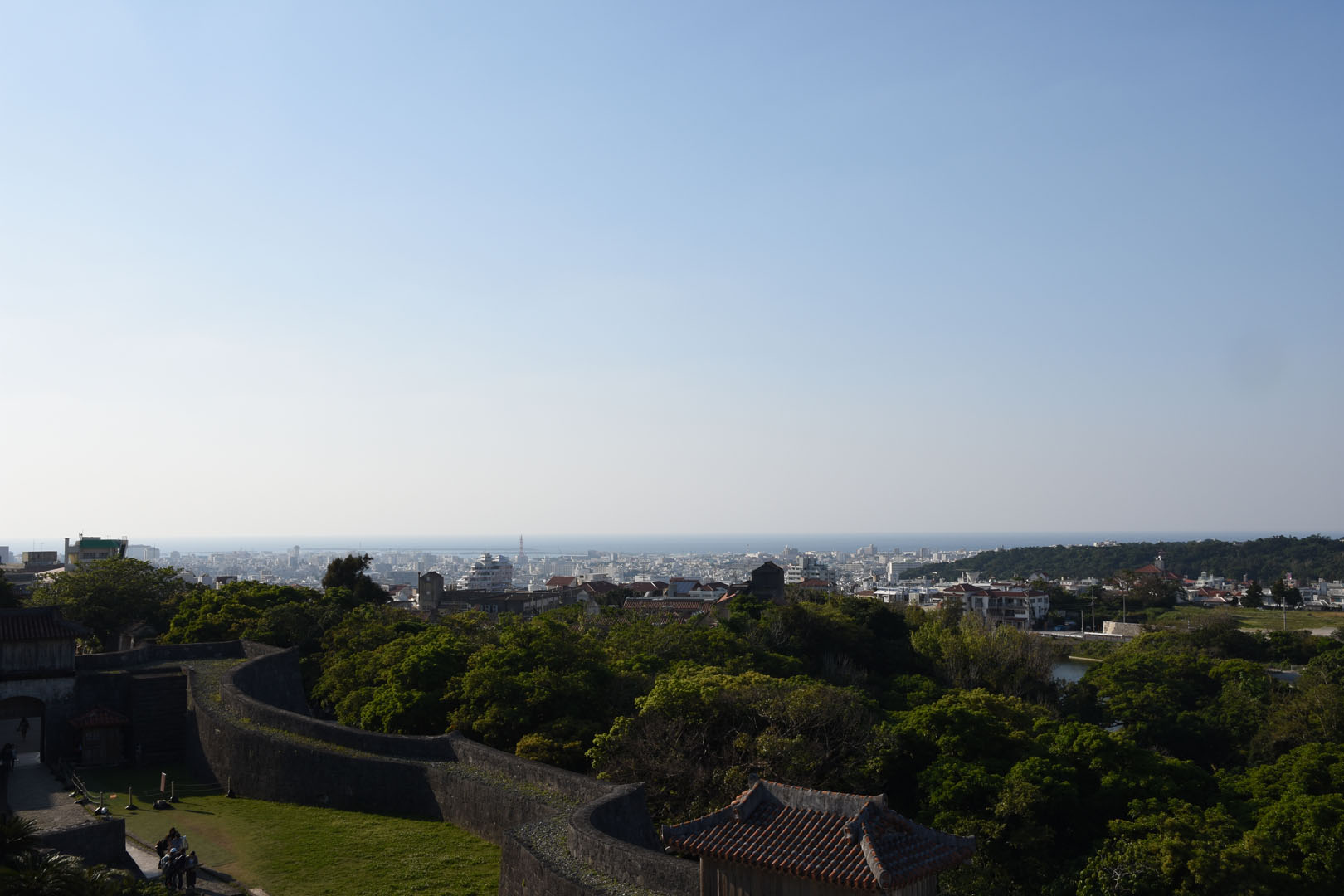 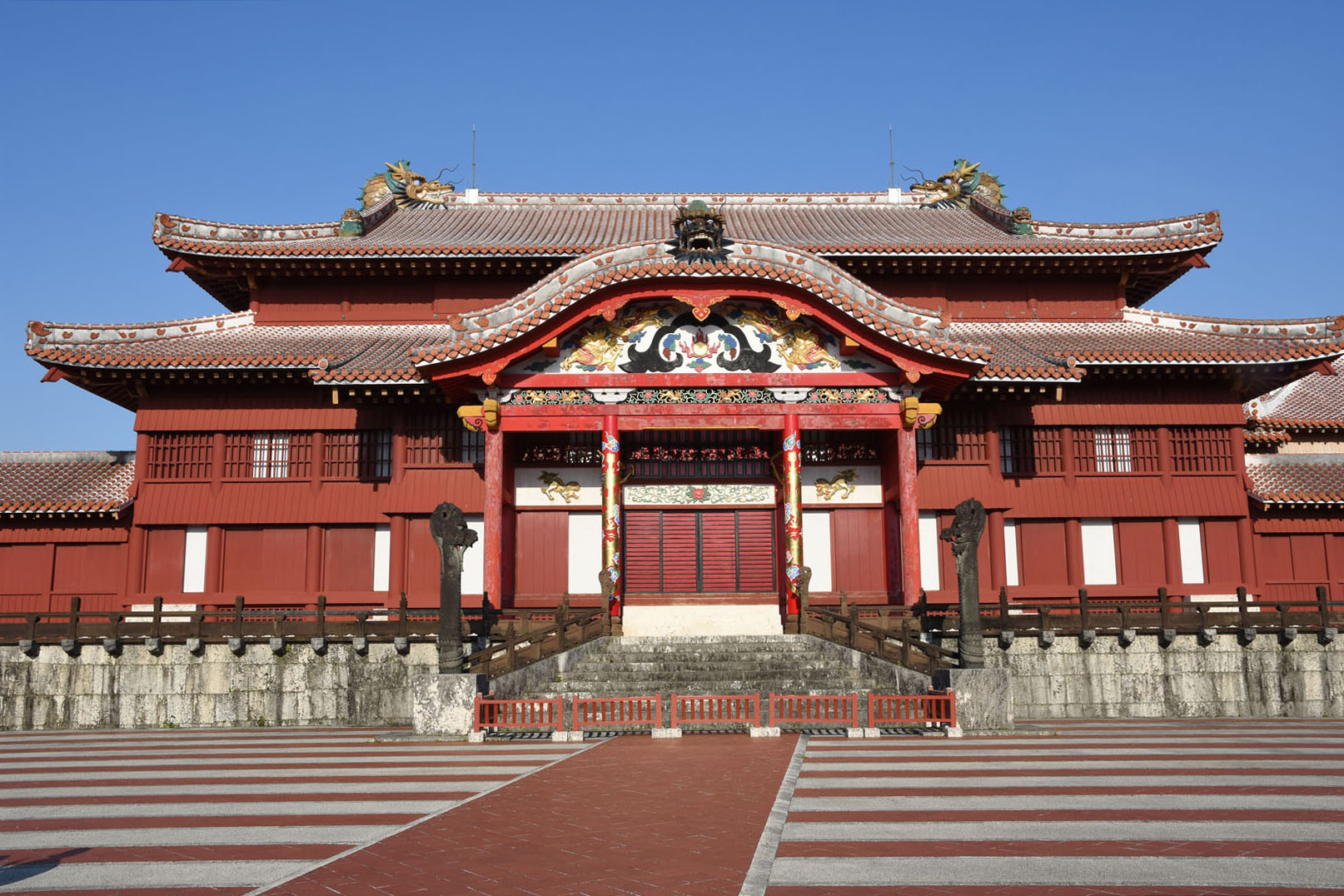 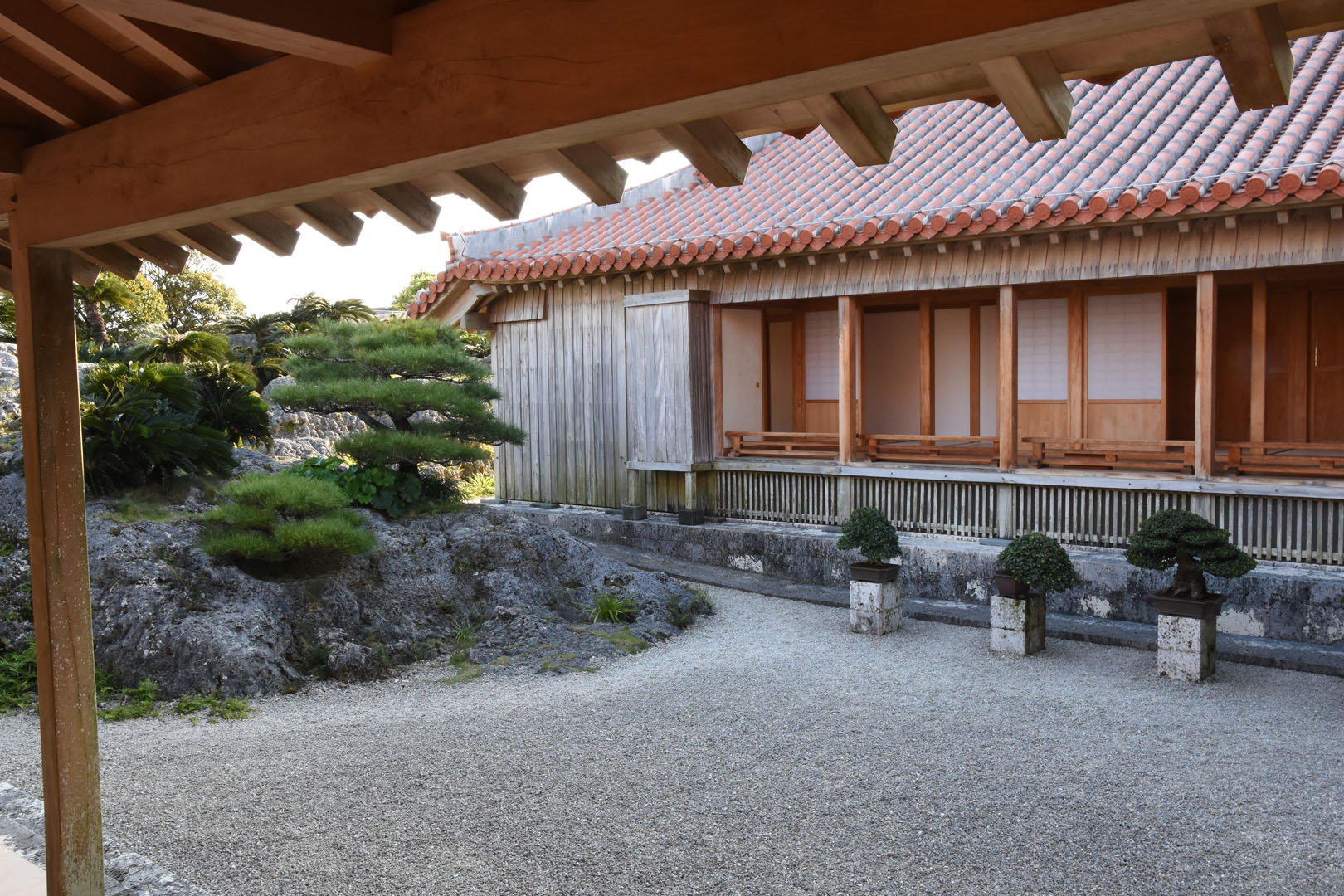 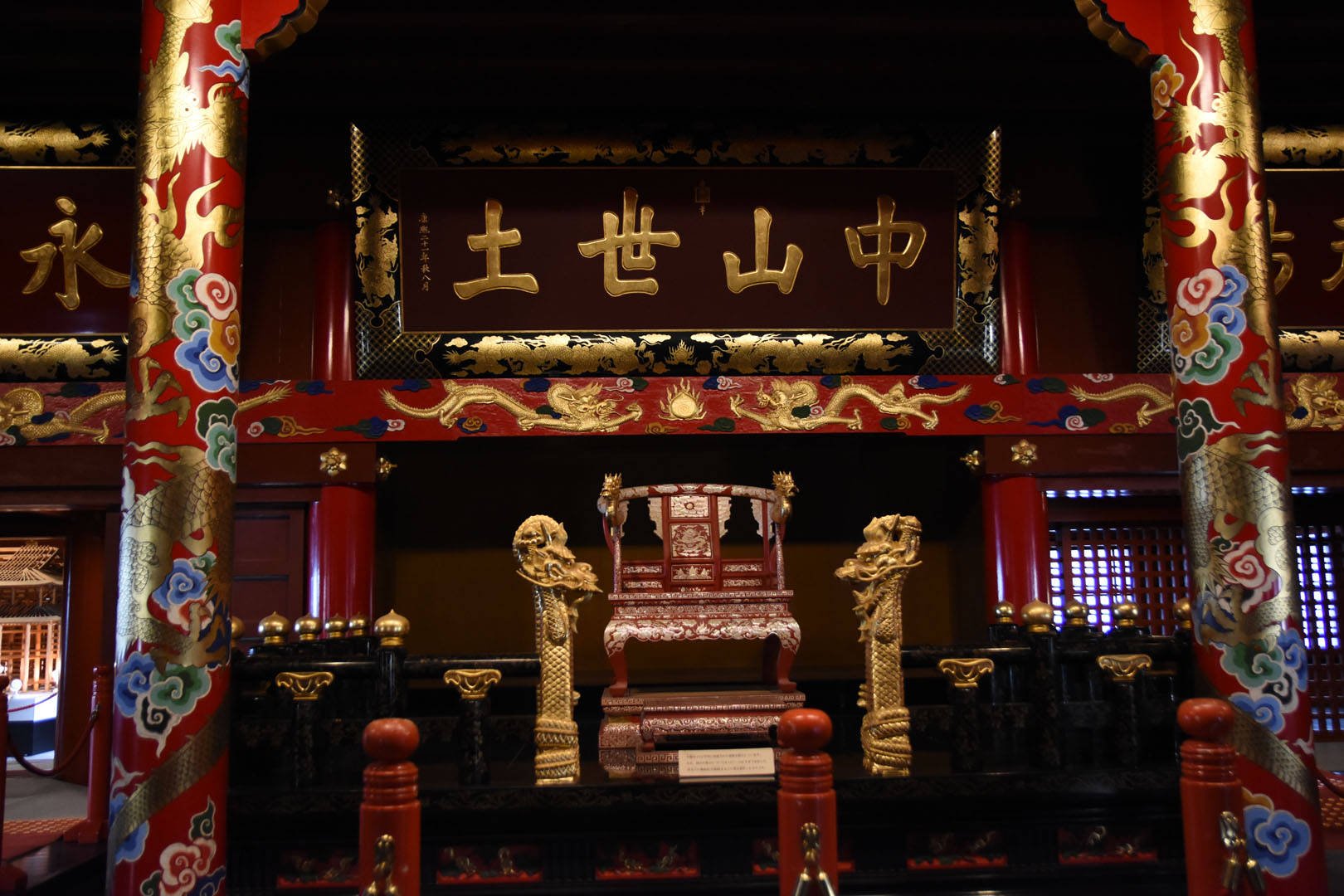 The entertainment and shopping city of the city is Kokusai Dori. A long street in which all kind of restaurants and shops are lined up. From there the local market can be reached. Like with other markets in Japan one can buy fresh fish and seafood and choose to let it prepare to eat upstairs. 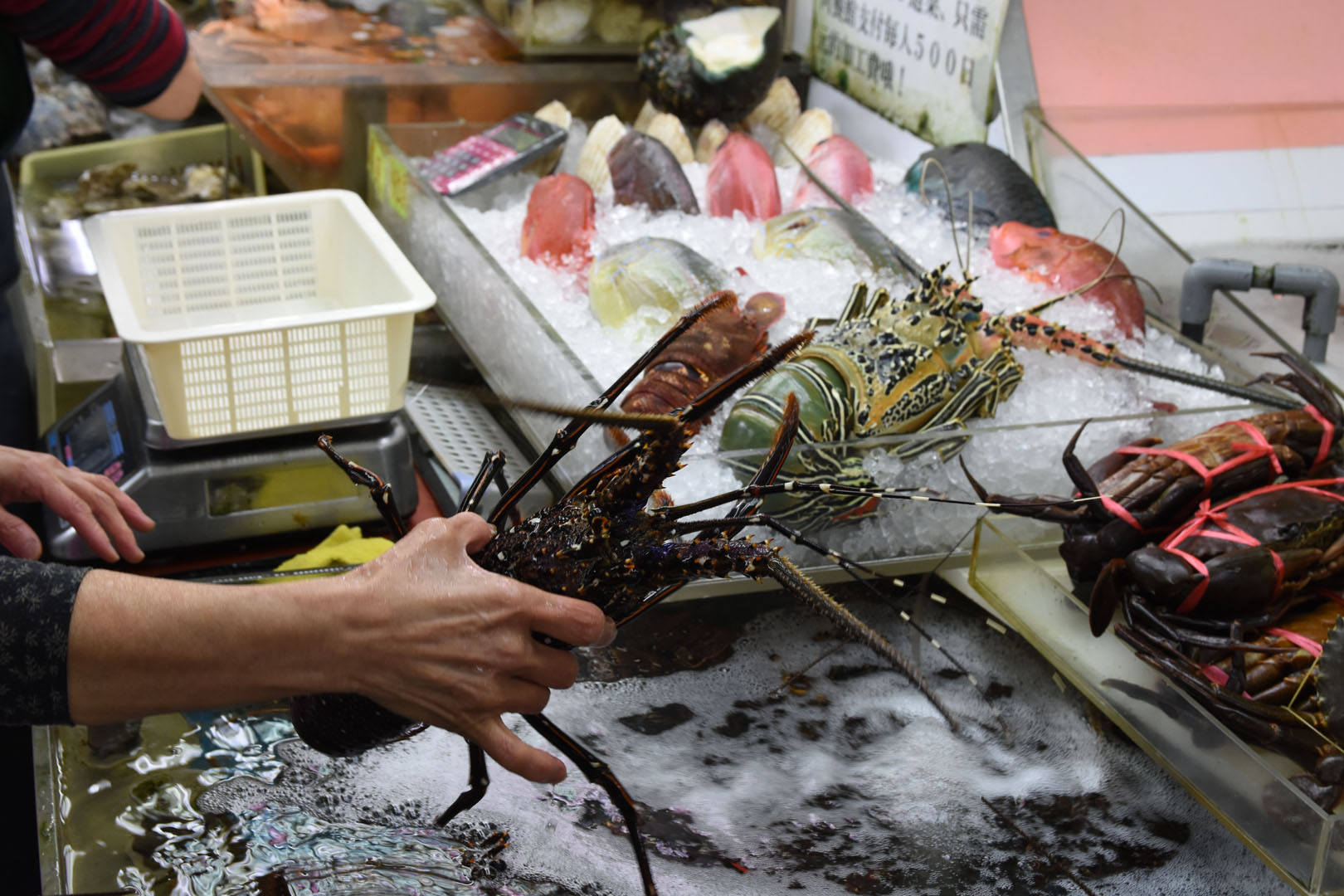 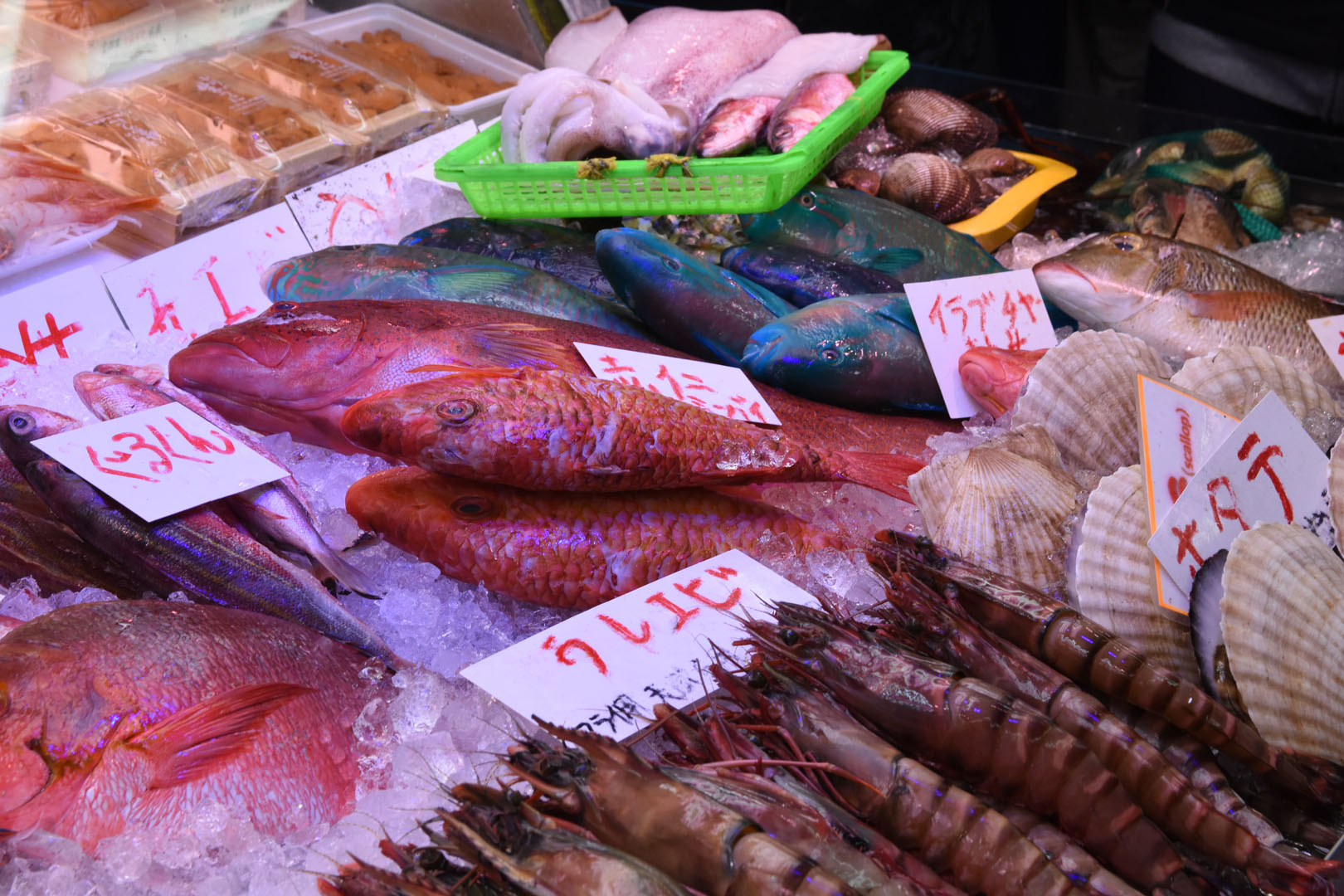 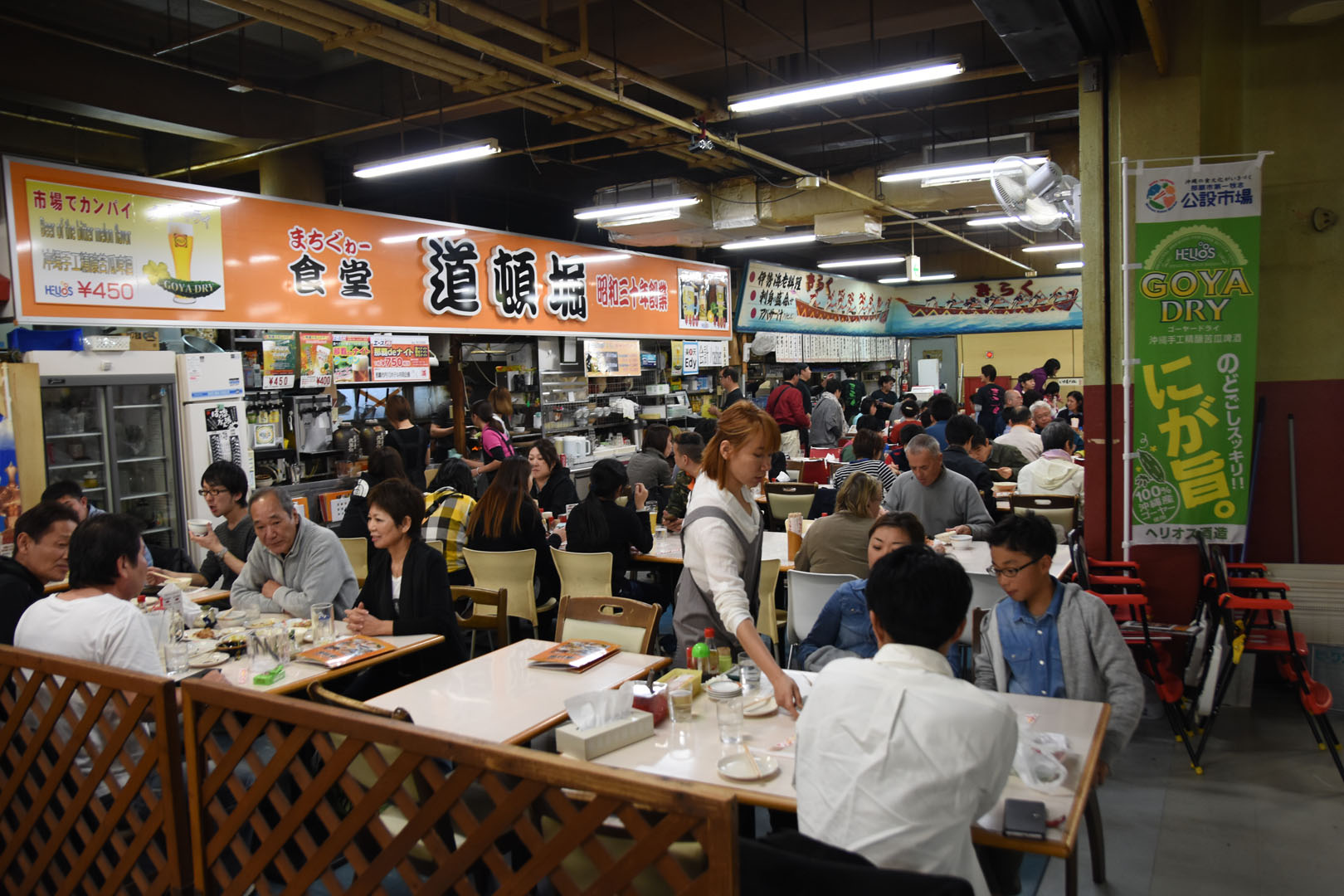 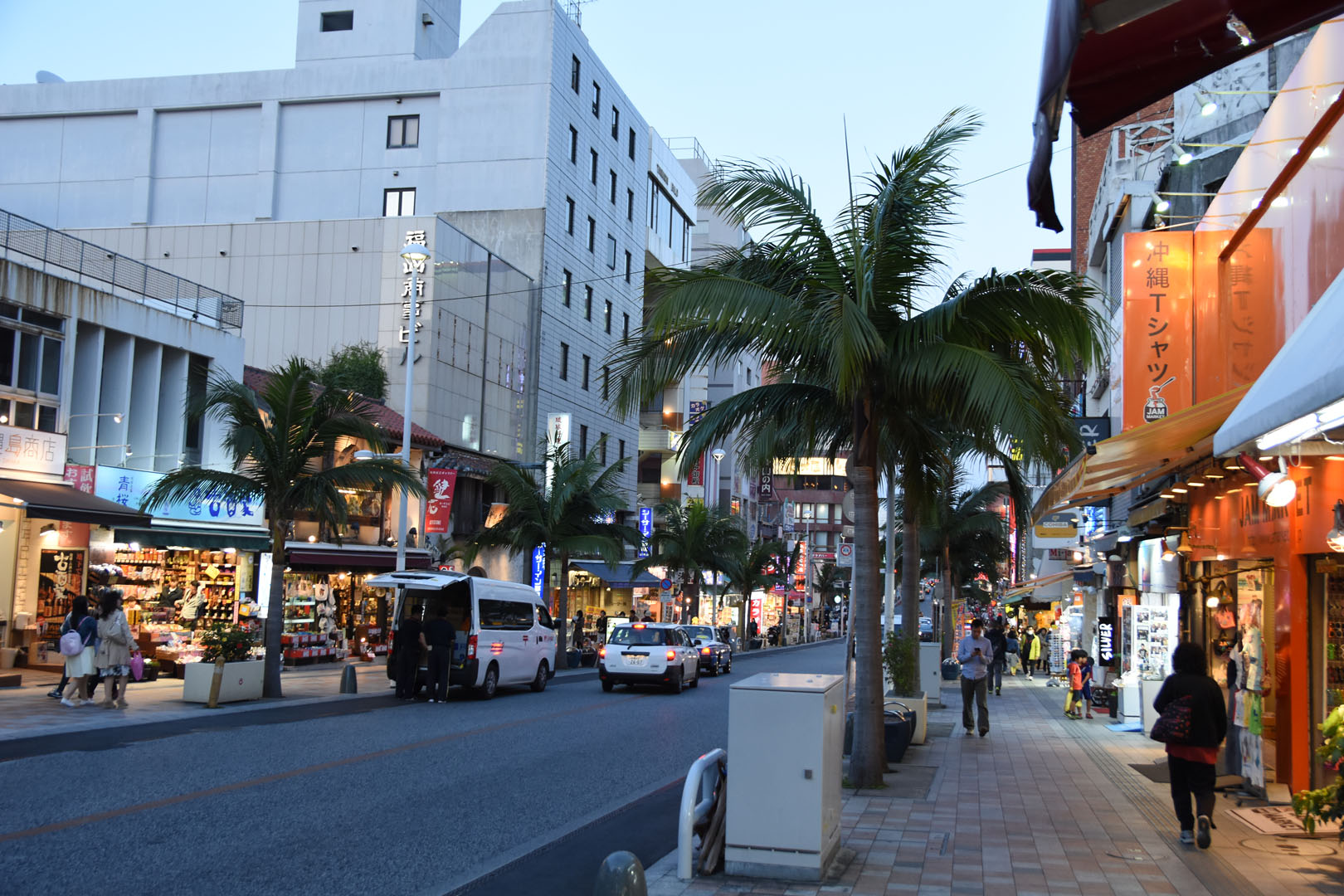 In the end, a restaurant offering live performances convinced me and I tried Okinawa Soba while listening to two Okinawan performers.