Today I left Switzerland and entered the USA.

My flight was operated by Swiss and departed at noon. Miriam and Richard kindly accompanied me to the airport. Once I checked my luggage we went for a coffee and talked about his Japan vacation from which he returned just yesterday. It was the first time for him and he could tell us about many exciting experiences and encounters.

An hour prior to boarding we finally parted. It was not easy to let go and I promised to come back home safely.

Security and passport control was very fast, as expected from ZRH. The underground train took me amongst other passengers to the long-distance departure terminal. There it was announced that the boarding time was postponed, meanwhile they checked passports and boarding passes another time.

I managed to get a decent seat; row 24, window seat. The leg room was sufficient and the entertainment system compromised the same old cable remote as on my Tokyo flight. Luckily Swiss will soon exchange their A340 fleet for Boeing 777s. My seat neighbour was an American on his way home. We talked a bit about the differences between Switzerland and the U.S. 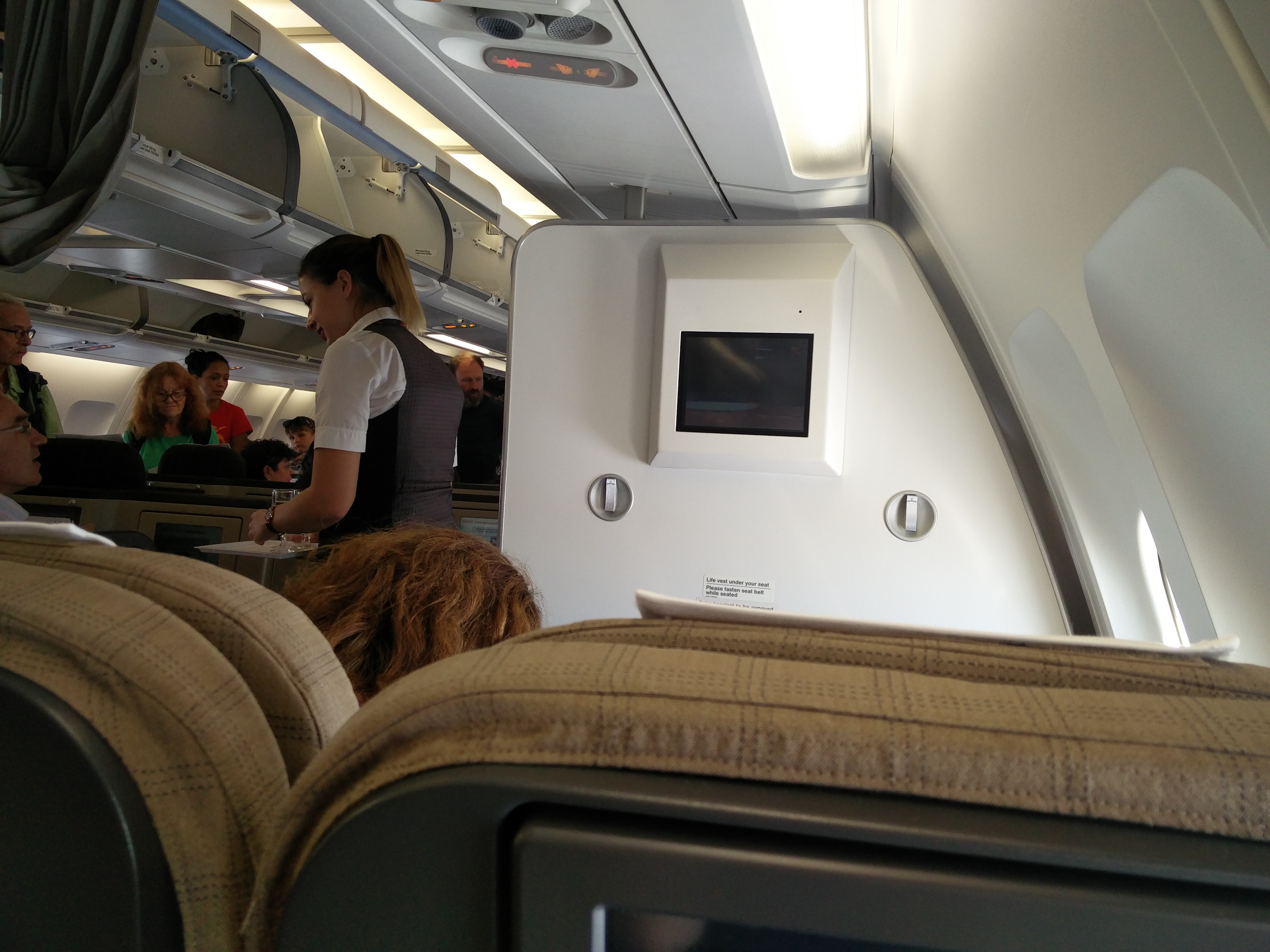 Since this flight went westbound, we were following the sun and it never got dark outside. That is why we closed the website blinds soon after.

As you can probably imagine a twelve hour flight is not very much entertaining, but I could pass time with watching movies, writing and reading. Here comes a short summary of my flight:

3pm – food was served, I chose chicken with polenta. Also cheese with a nice bun and a salad. A decent meal, quite nice flight so far.

4:30pm – it became quiet, I got sleepy. Decided to watch a movie to stay awake. Watched a Japanese historical film about Oda Nobunaga.

7pm – A baby one row in front of me becomes really noisy, didn’t intend to sleep much anyway.

9pm – another movie, something from the Avengers universe. Was also served a small sandwich.

11pm – lights on. We were served a mini Calzone.

At 1am, ehm, 4pm we approached the San Francisco bay. Much was covered by clouds but I noticed a slight change from brown soil to residency areas with some green mixed in. The sun was shining and a single sailboat boat crossed the bay.

We touched down smoothly and had to wait another 15 Minutes until we could approach the arrival gate.

Immigration went rather well, the officer was not in a particularly good mood but he had no complaints with my visa. Also customs was cleared surprisingly fast.

From the train station I took a BART (long-distance SF bay-area train) to downtown SF to get to my accomodation, an Airbnb. On the way I noticed quite some interesting differences, but I am too tired at the moment to list them in detail.

My host welcomed me and showed me the flat. I finished this post and went to bed.

Flying to the US

Markiert in: Flight    San Francisco
Lade Kommentare …
We use cookies to ensure that we give you the best experience on our website. If you continue to use this site we will assume that you are happy with it.OK