This Sunday we left Kusatsu and I followed the Hokuriku line to Nagano. The former Olympic town in the mountains is famous for its soba noodles and a historic temple.

Today was another busy day, so we rose at 6:30 to make the most out of it. Before heading to breakfast, we soaked one more time in the Onsen inside our ryokan. At the table awaited us another assortment of local ingredients, including konyaku and an onsen egg. Further, a nabe pot with vegetables was prepared ahead of time and was warmed up on our arrival. Besides, there was a buffet with Japanese and Western style breakfast items, including rice, miso soup, bread, fruits, and more. A chef prepared half-cooked omelets on order. This time I unfortunately have no photo to show.

At 9 o’clock we checked out and deposited our luggage at the ryokan. This time in our western clothes we walked through the town one more time. By the way, this is Gunma prefecture’s mascot. 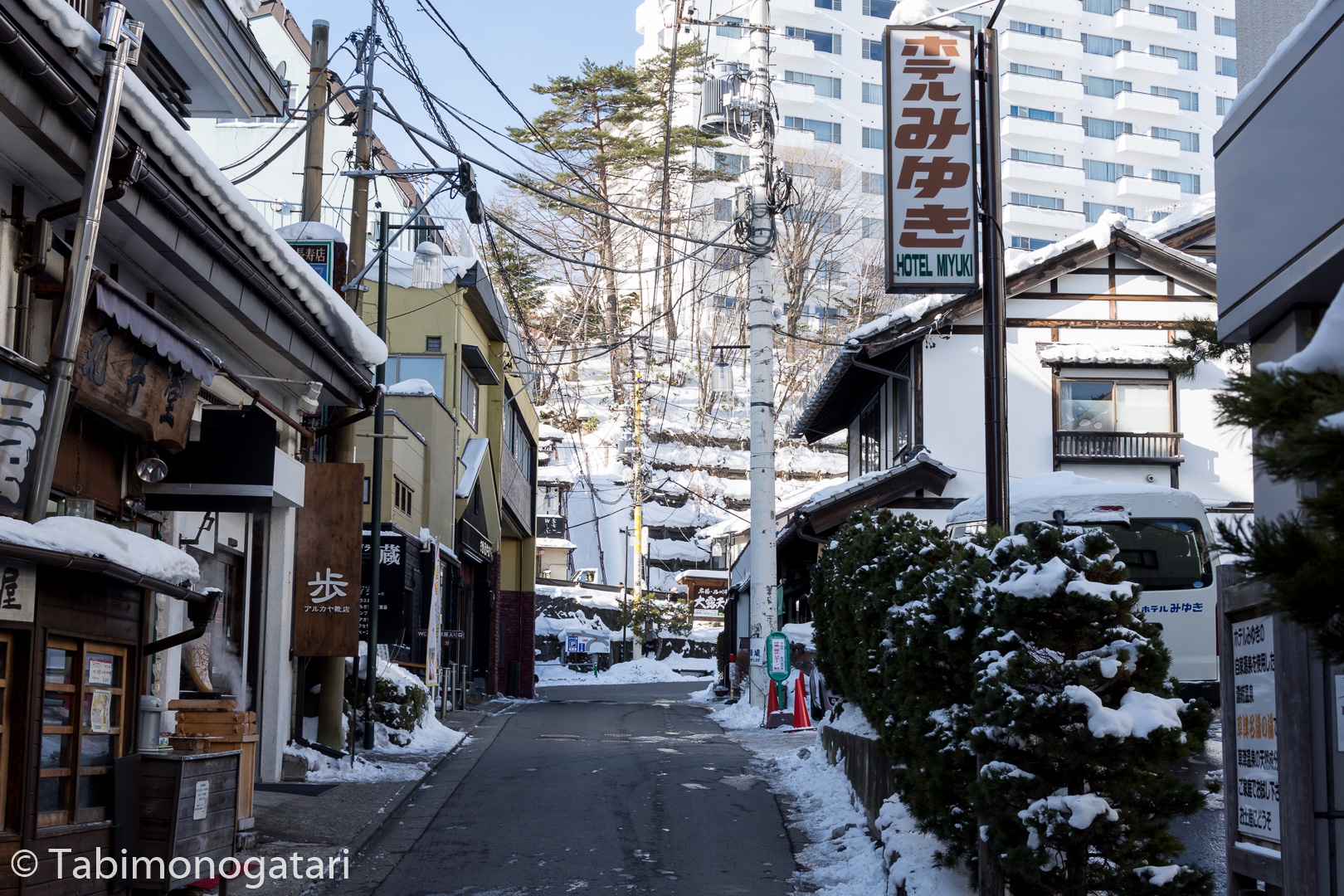 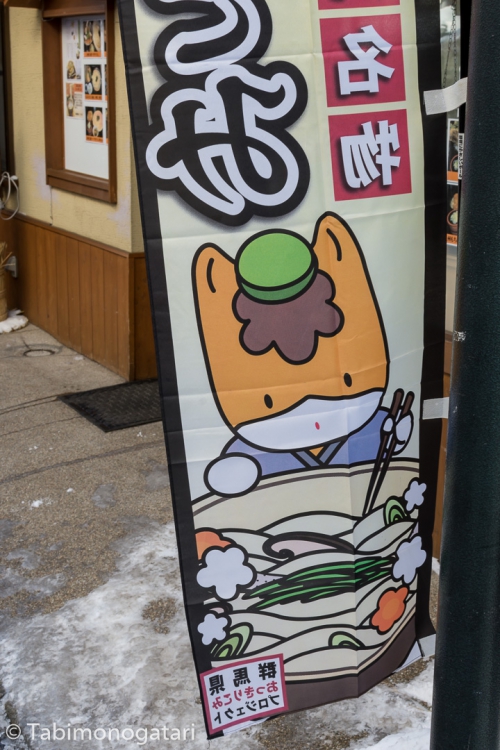 Yesterday we arranged a slot in a glassblowing workshop to make our own glass marble. Inside the shop we could choose amongst different base colors and two secondary colors for decoration. 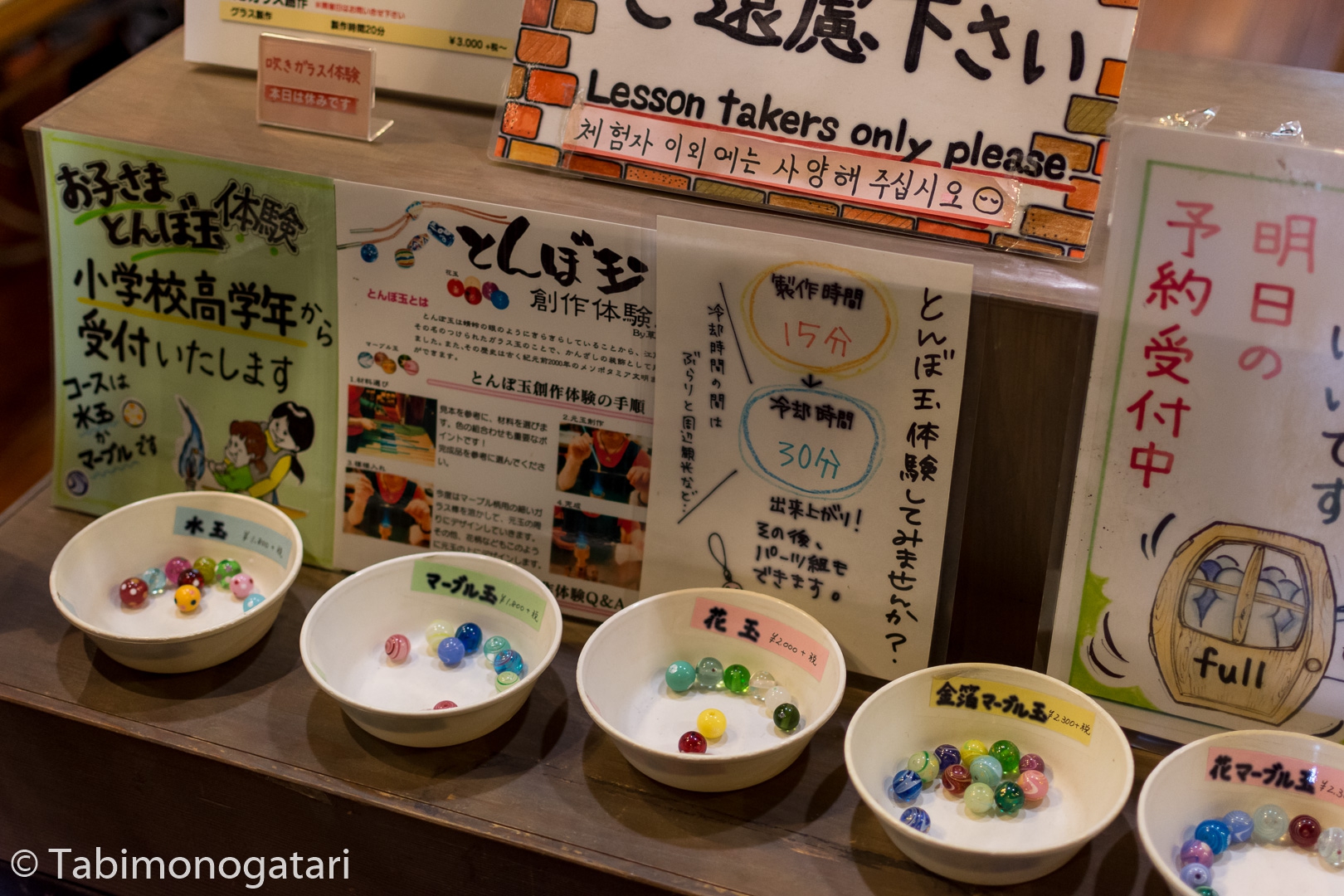 Then, we sat down in front of a Bunsen burner and started to melt the glass rod with the help of the staff. When the rod became soft and changed color, we wrapped it around a metal stick to form a sphere. Spinning regularly ensured a even spherical shape. To add the patterns, we melted the thin glass rods and wrapped them around the sphere. Finally, we let everything merge in the flame and allowed it to cool down. 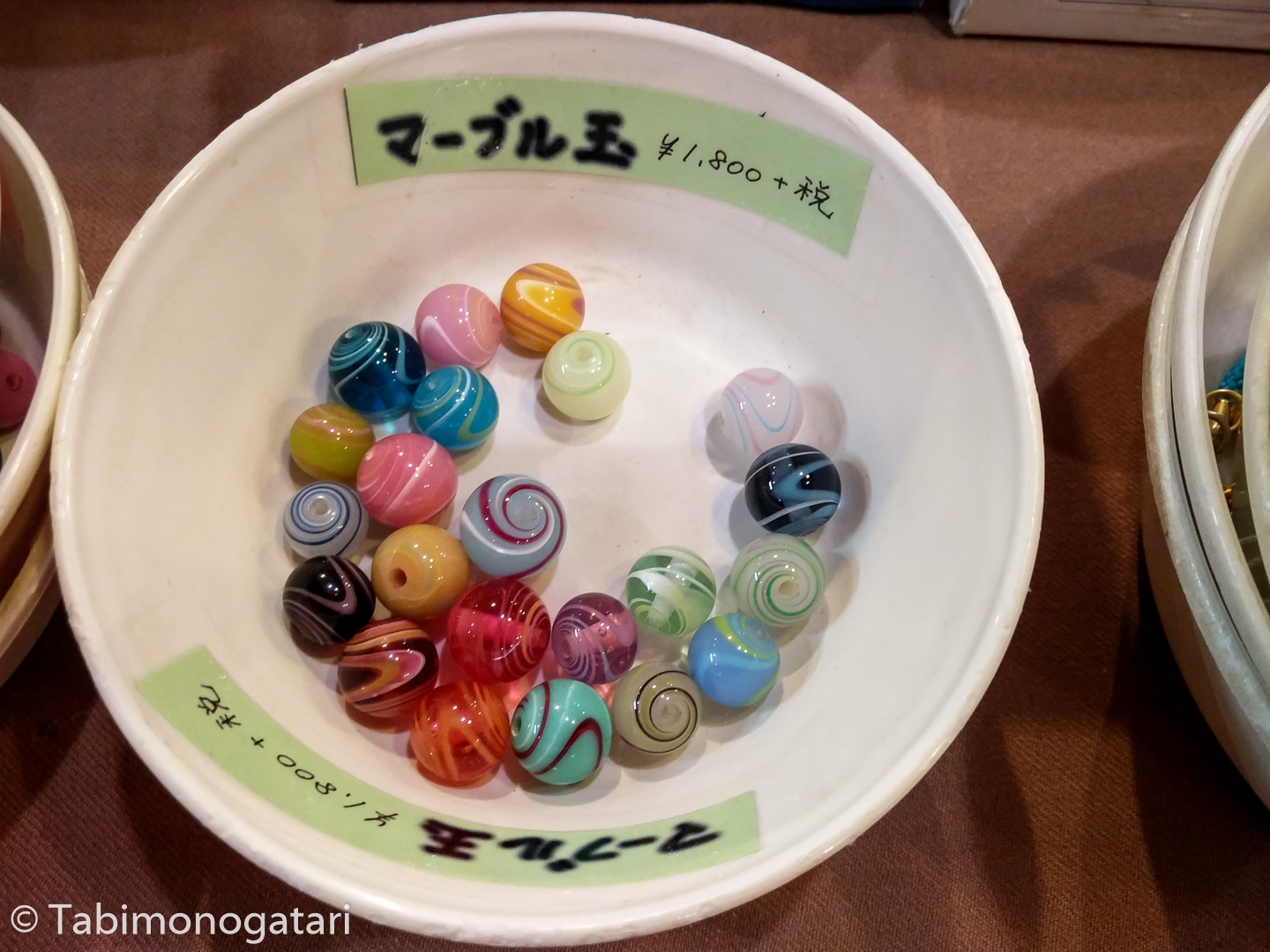 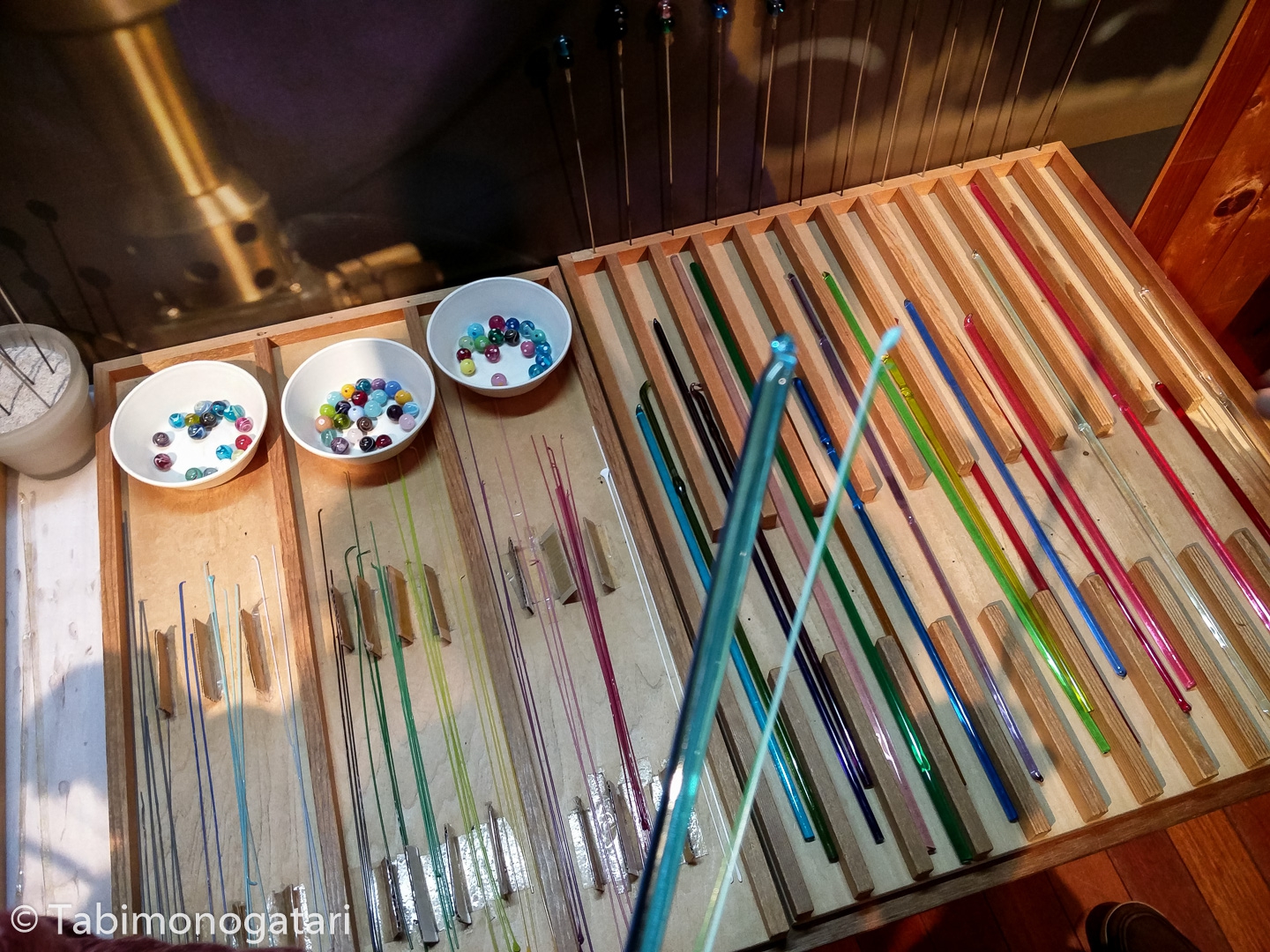 While the marbles were cooling, we payed Sainokawara Park another visit. Also at day the park looked gorgeous. 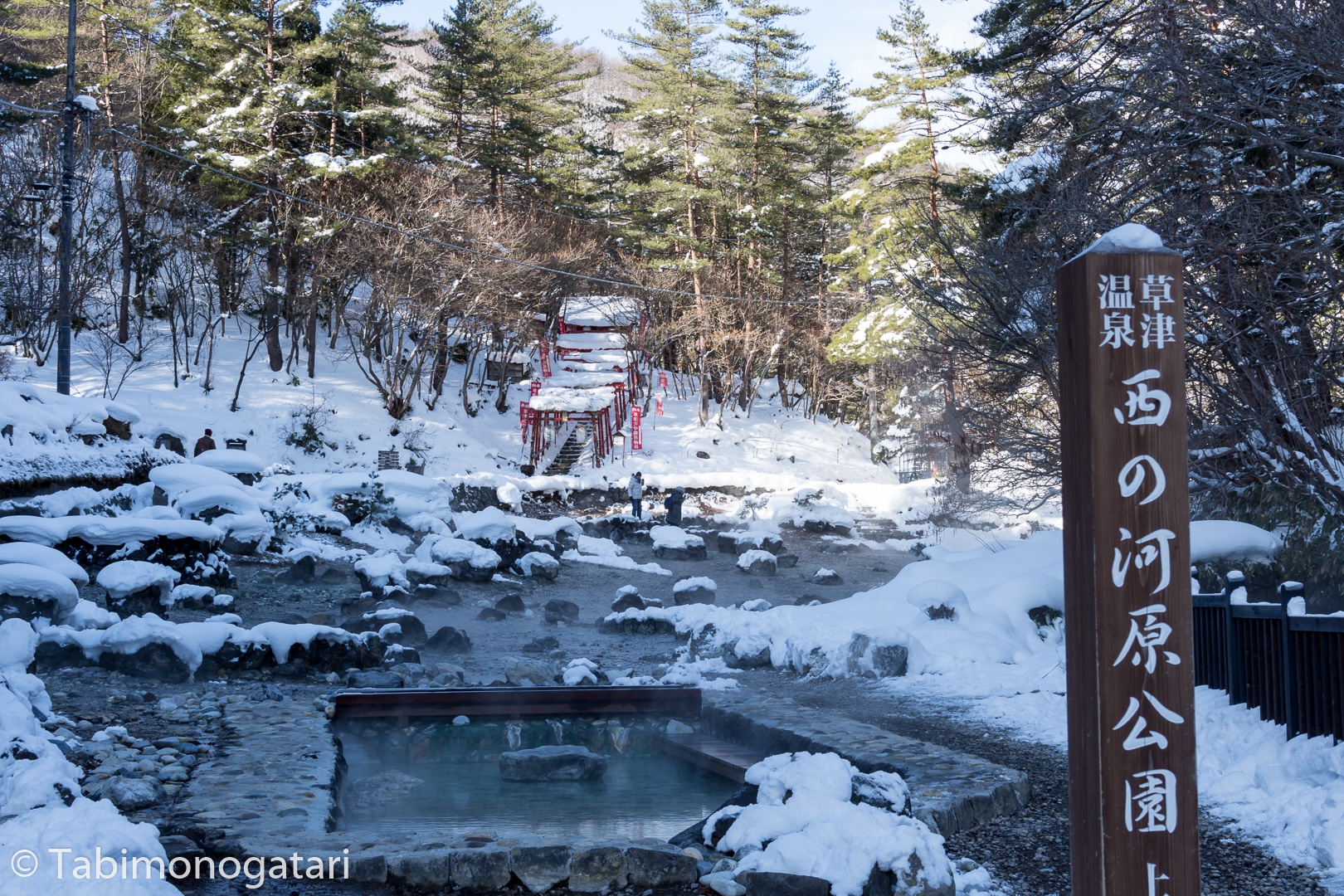 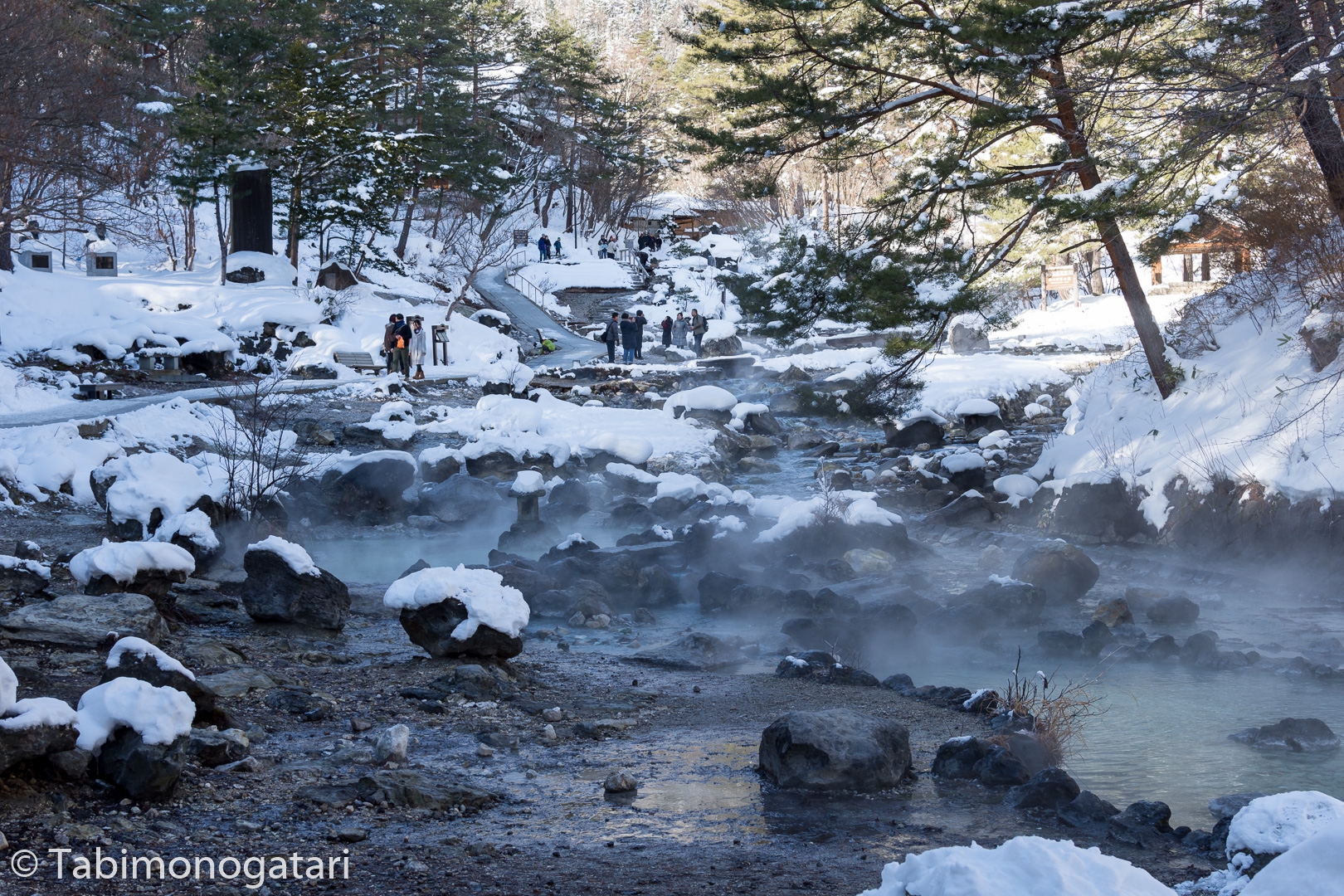 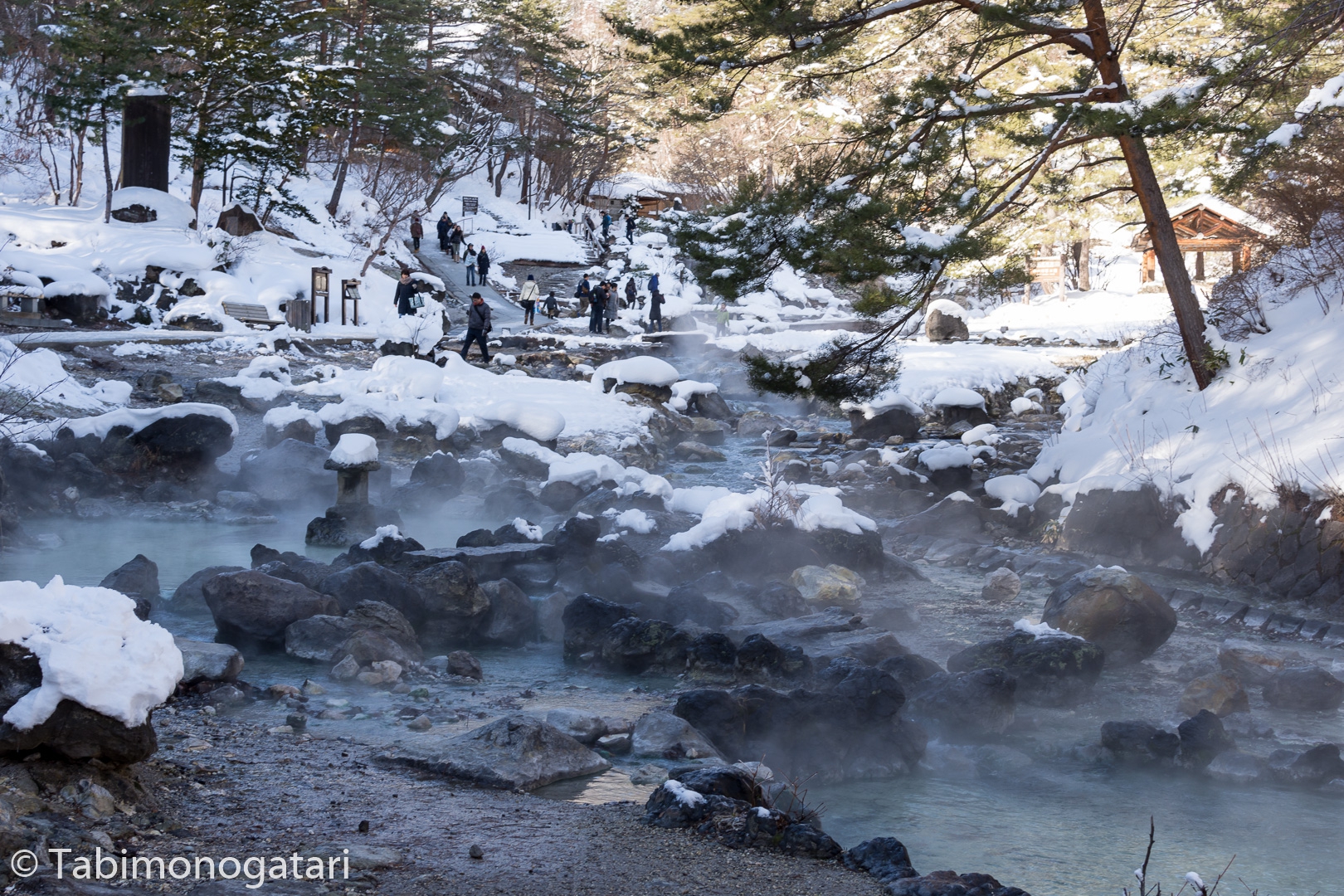 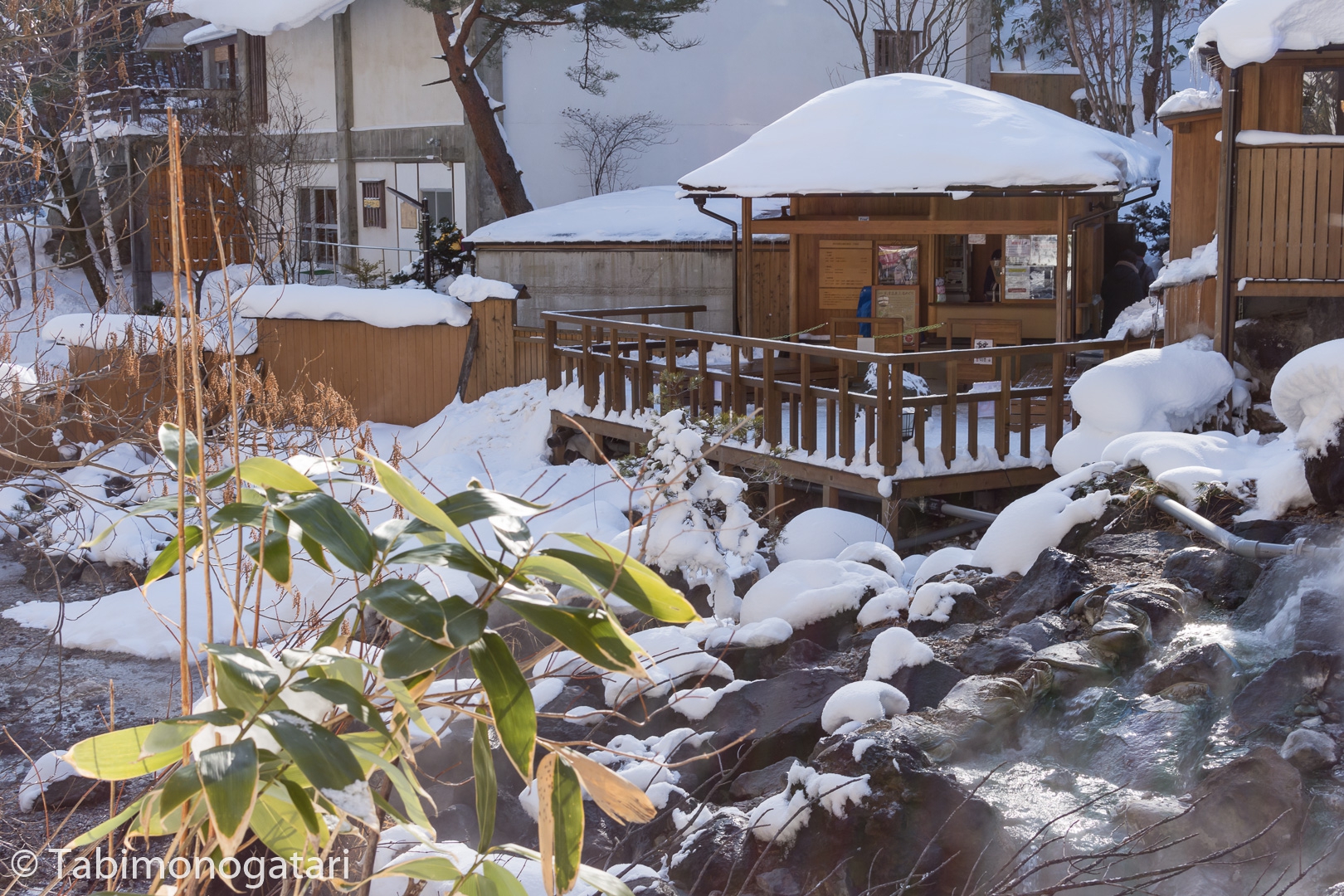 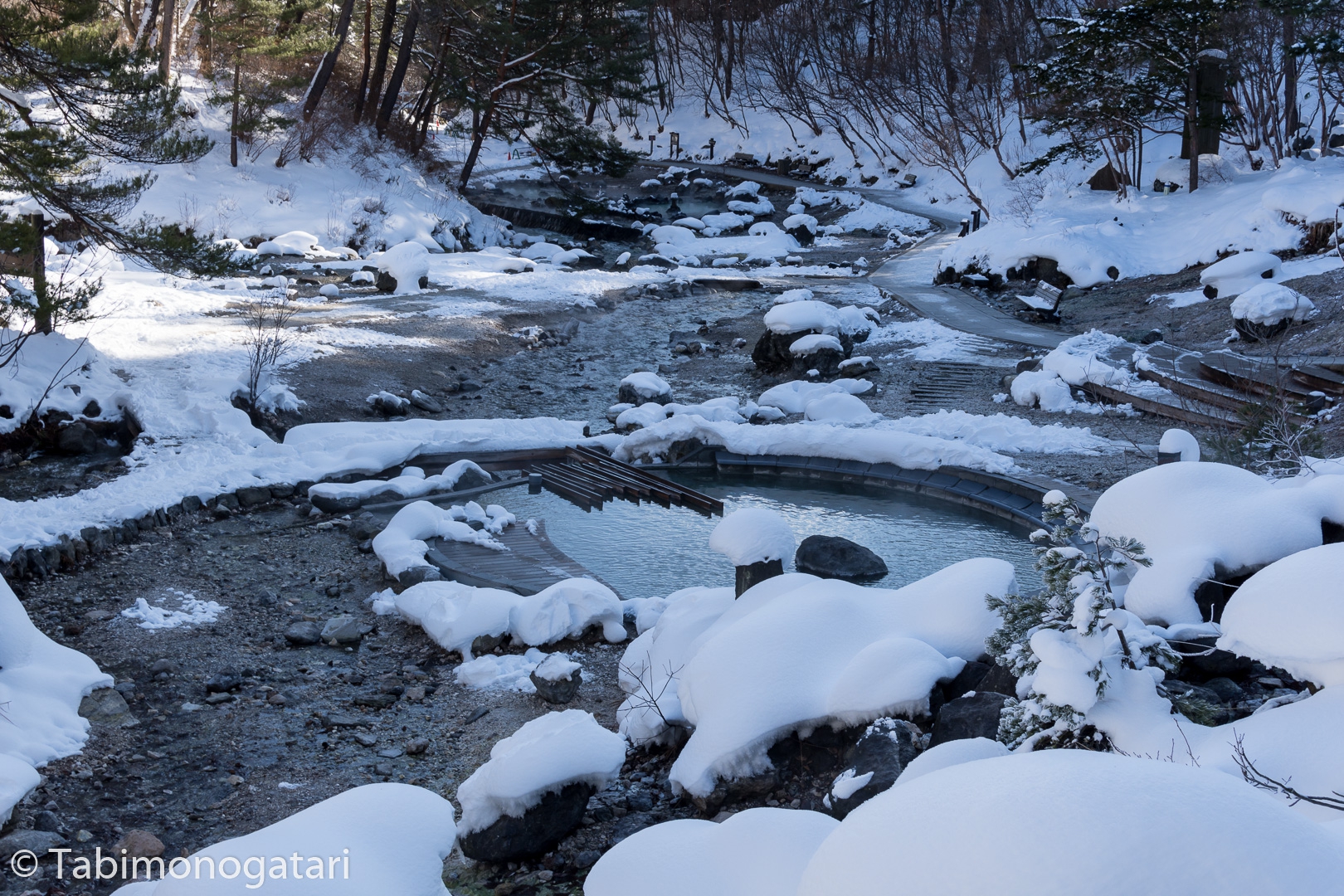 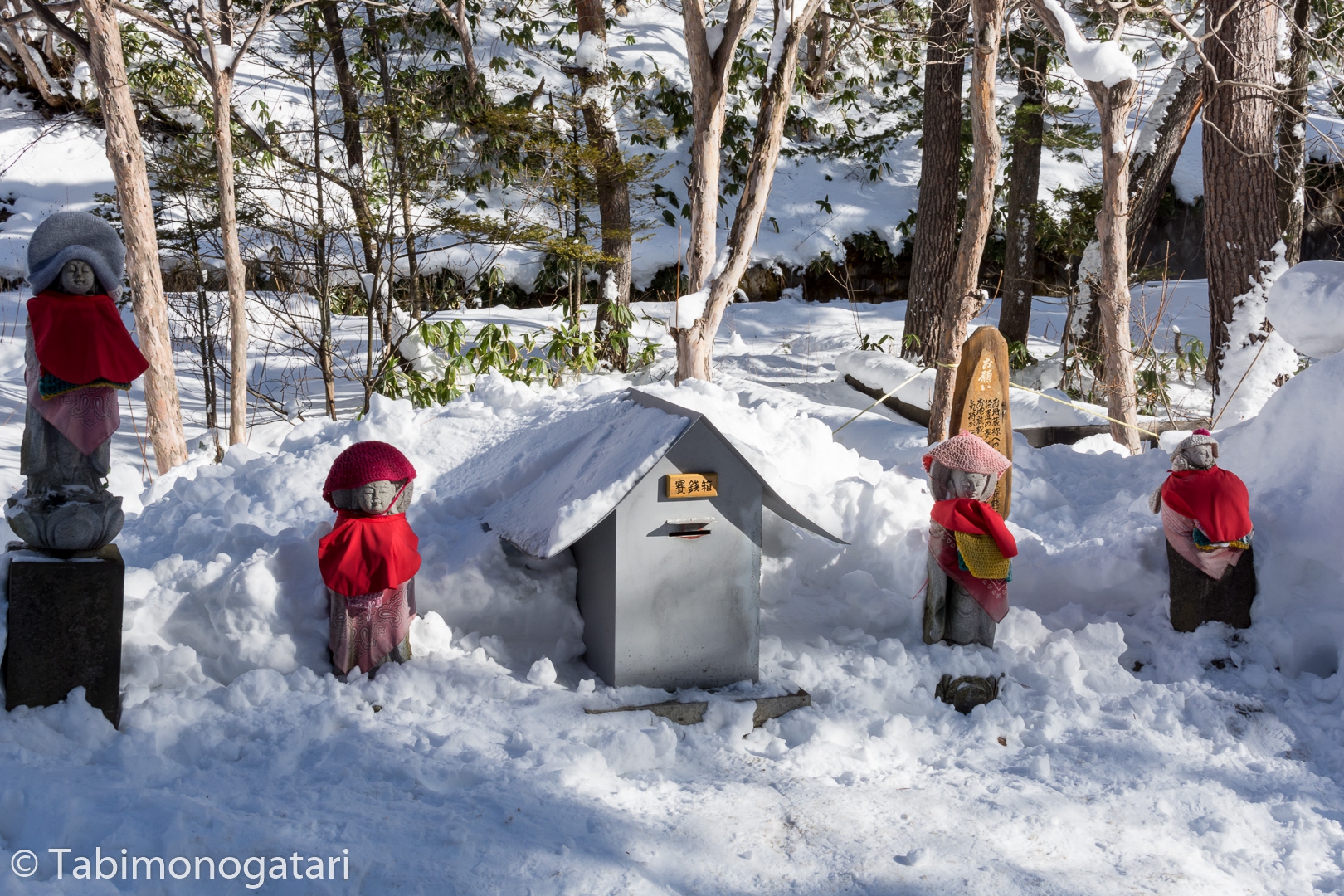 When we returned we could add accessories to furnish a piece of jewelry. I chose to make a necklace. 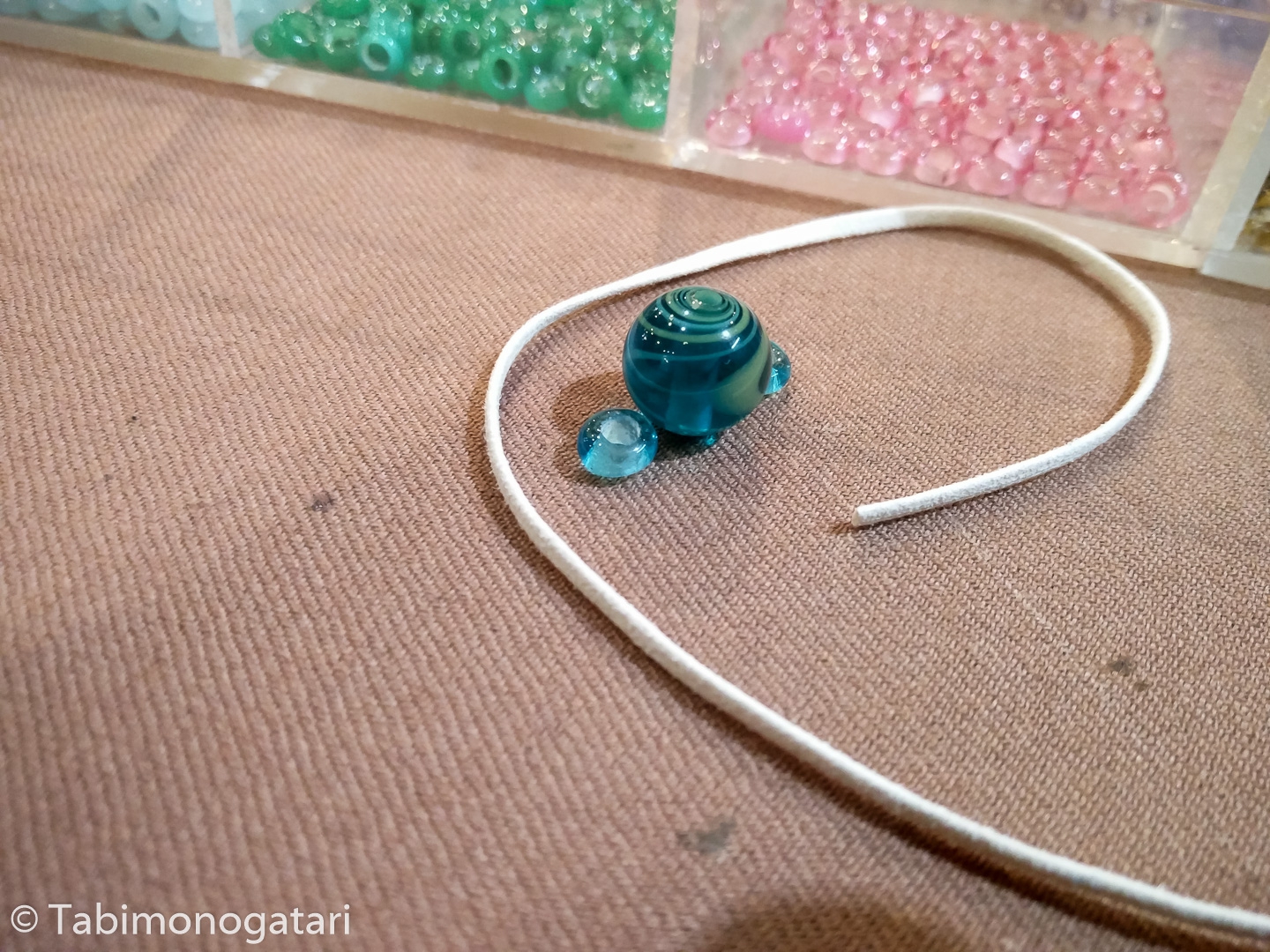 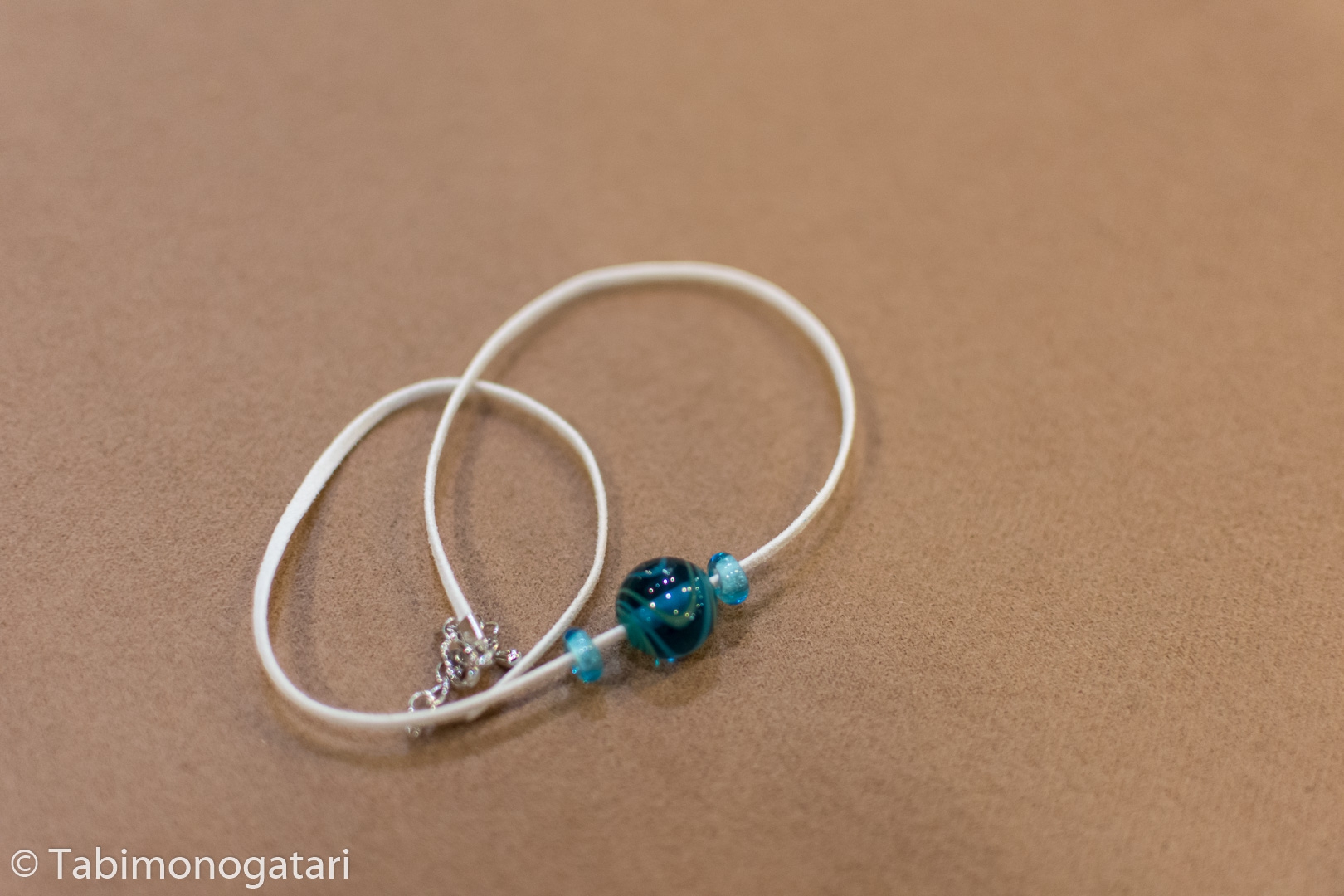 One last time we visited our favorite manju shop to pick up the boxes of manju we ordered. At a sake shop we could sample some locally brewed nihonshu. With plenty of souvenirs in my suitcase we left Kusatsu by bus and train. For lunch we had a torimeshi eki-ben. 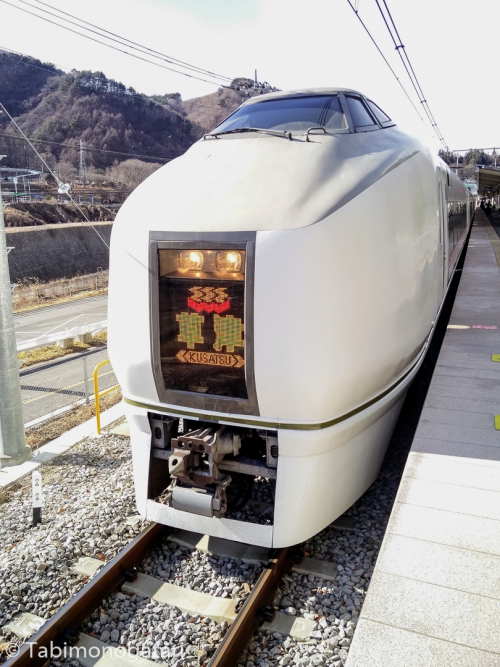 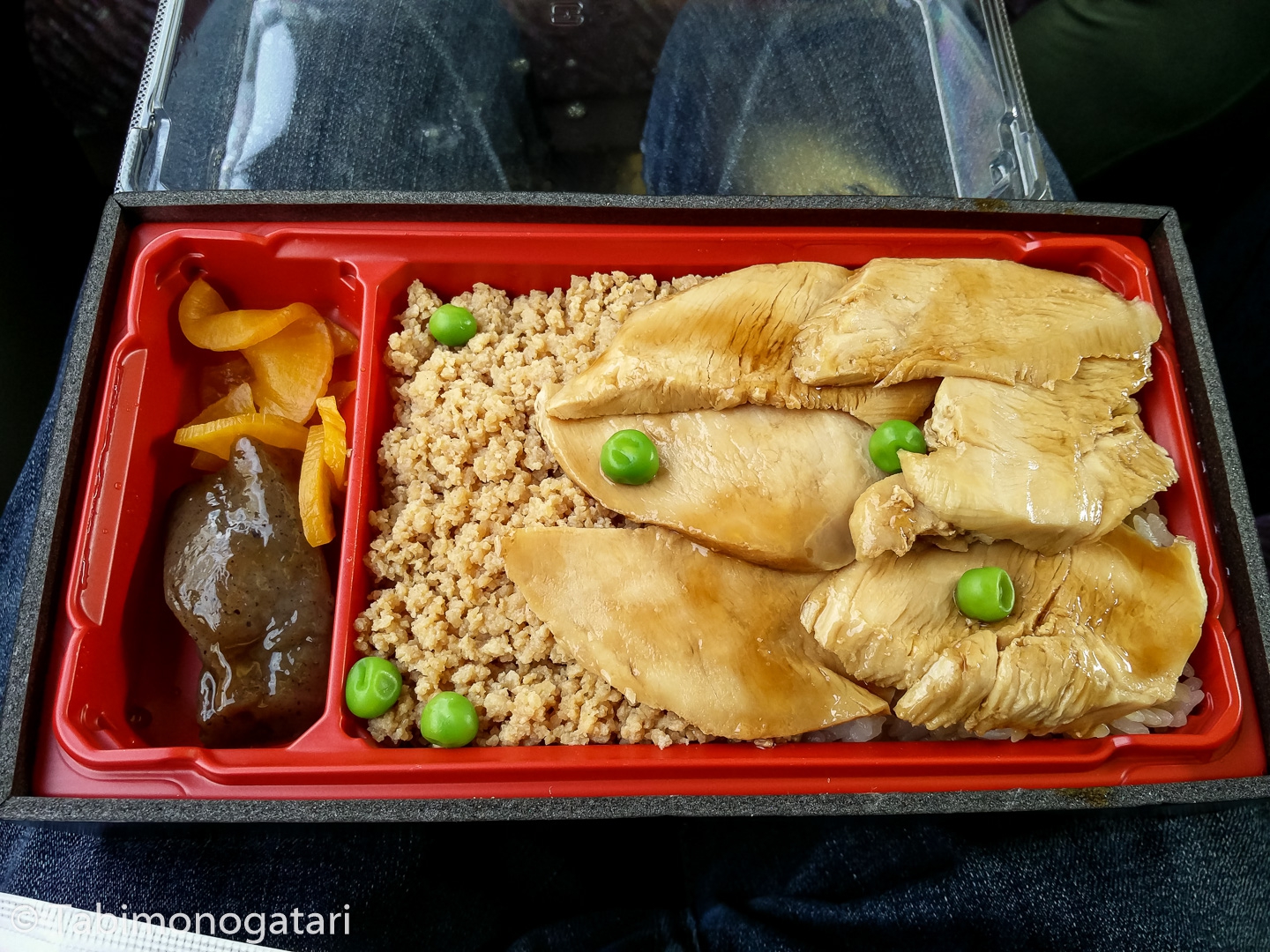 At Takasaki station we had to say good bye, as I needed to transfer here to the Shinkansen service for Nagano. It was a great spending time together in Kusatsu, now I am travelling alone again.

With my now valid Japan Rail Pass I passed through the transfer gates and just made it on the next train, the Hakutaka train on the Hokuriku Shinkansen line. The most recent addition to the Shinkansen network was opened in 2015, bringing Nagano and Kanazawa much closer to Tokyo. 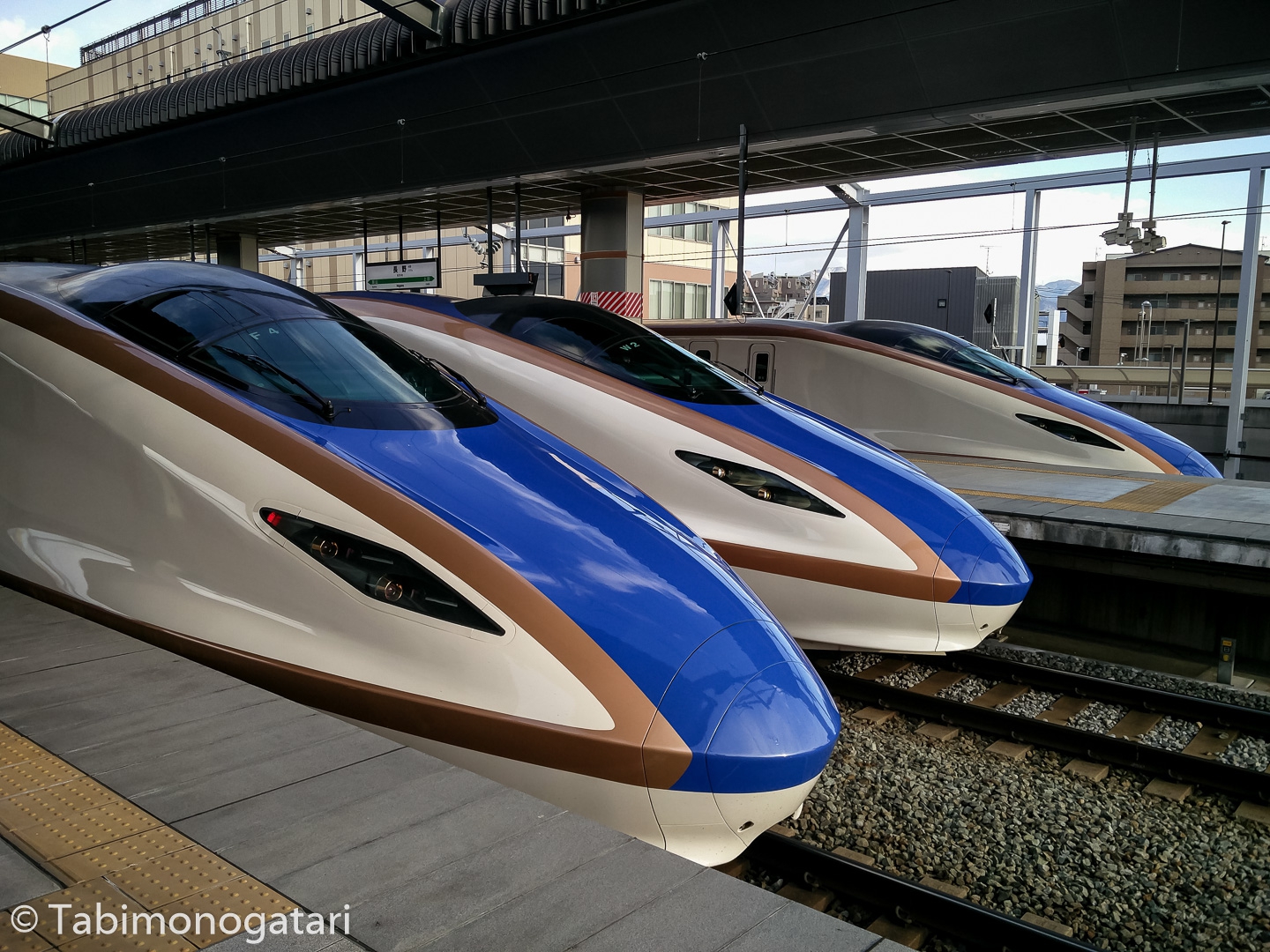 In just half an hour we made it to Nagano where I am staying for the next two nights in a hotel in front of the station. My sent luggage from Tokyo has arrived as well and I was happy to find my room in the highest 11th floor.

The main attraction of Nagano is the Zenkoji temple, 10 minutes by bus from the station. The temple was founded in the 7th century and is regarded one of the most influential temples in Japan. The large temple grounds housed multiple gates, the main hall and a pagoda. 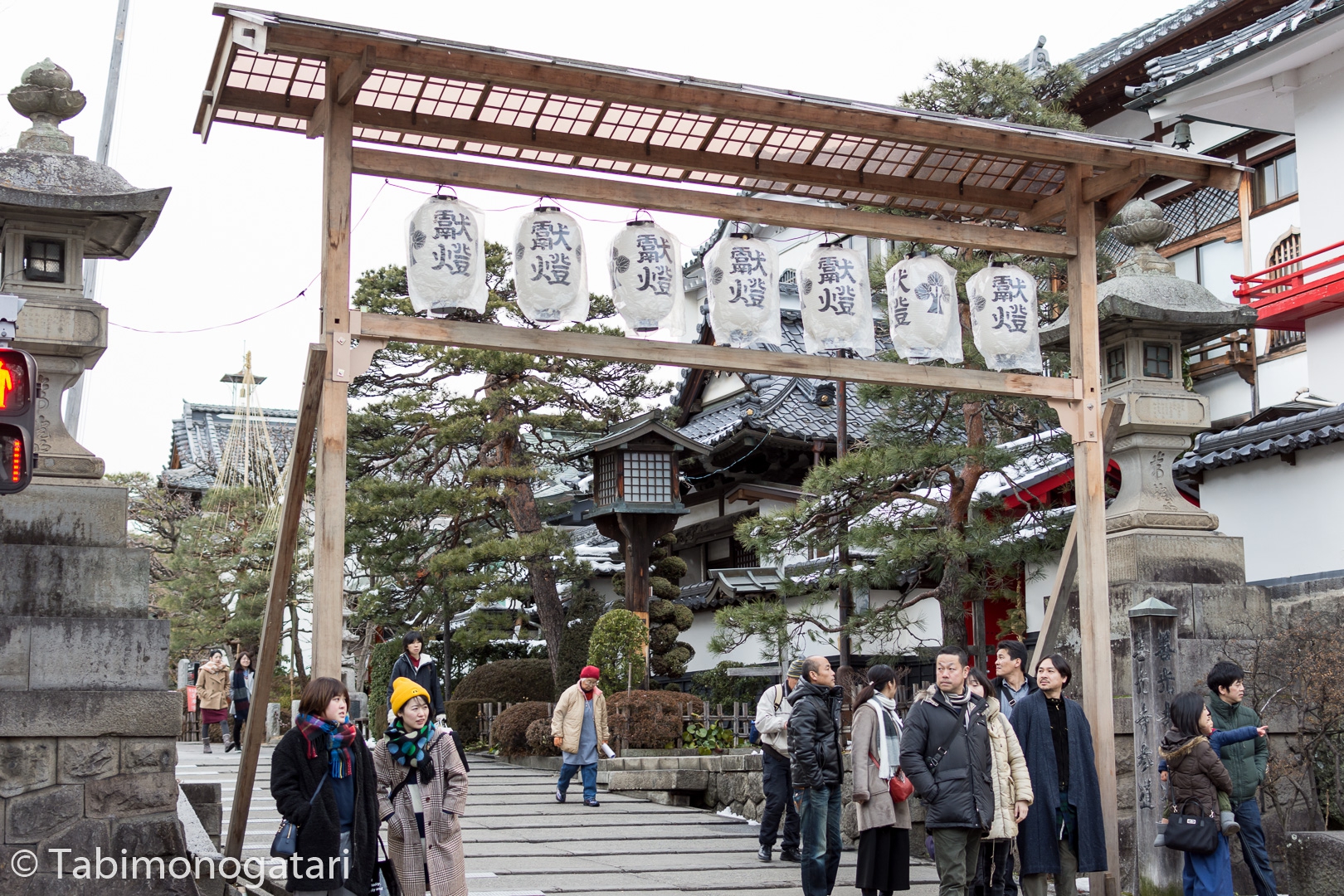 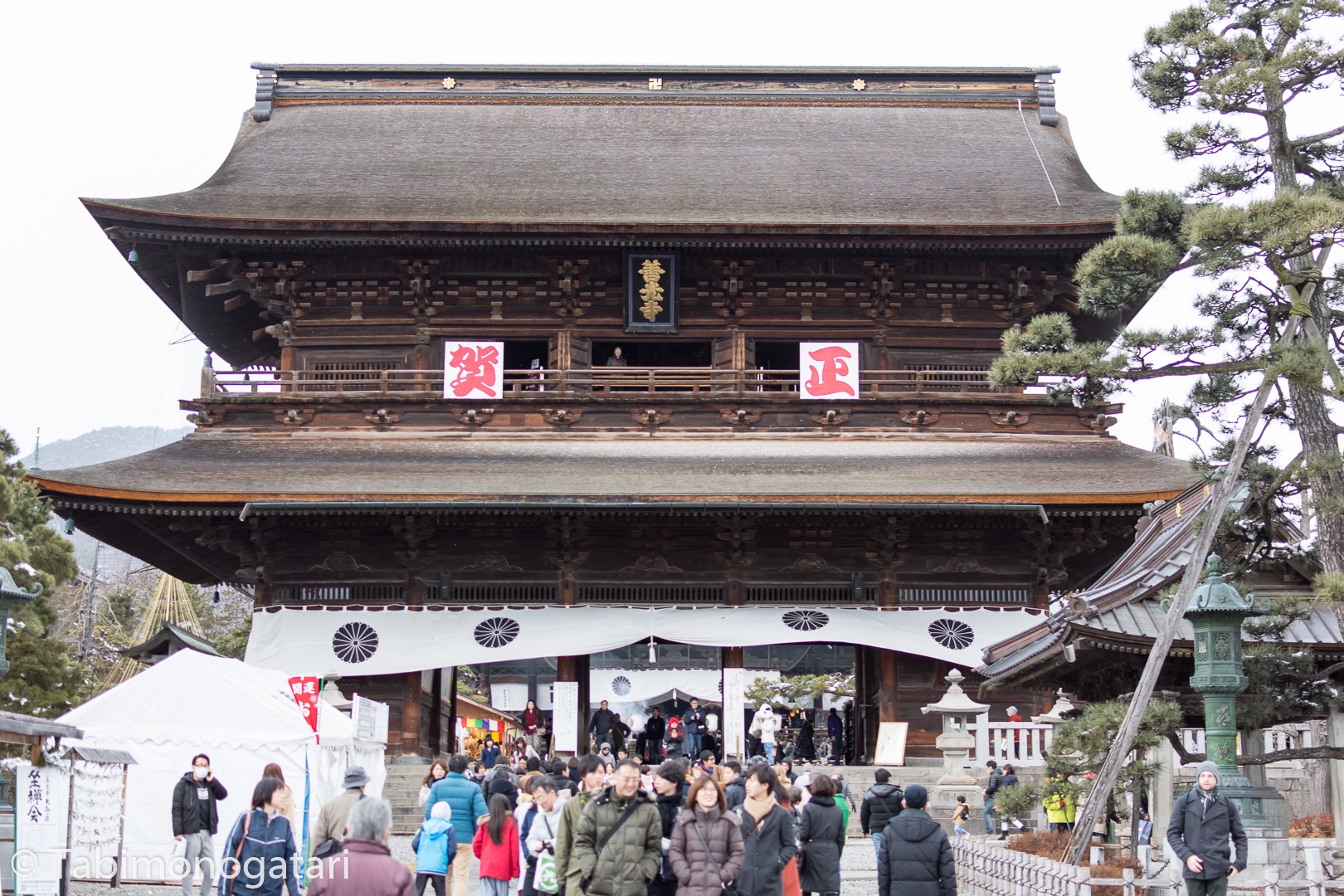 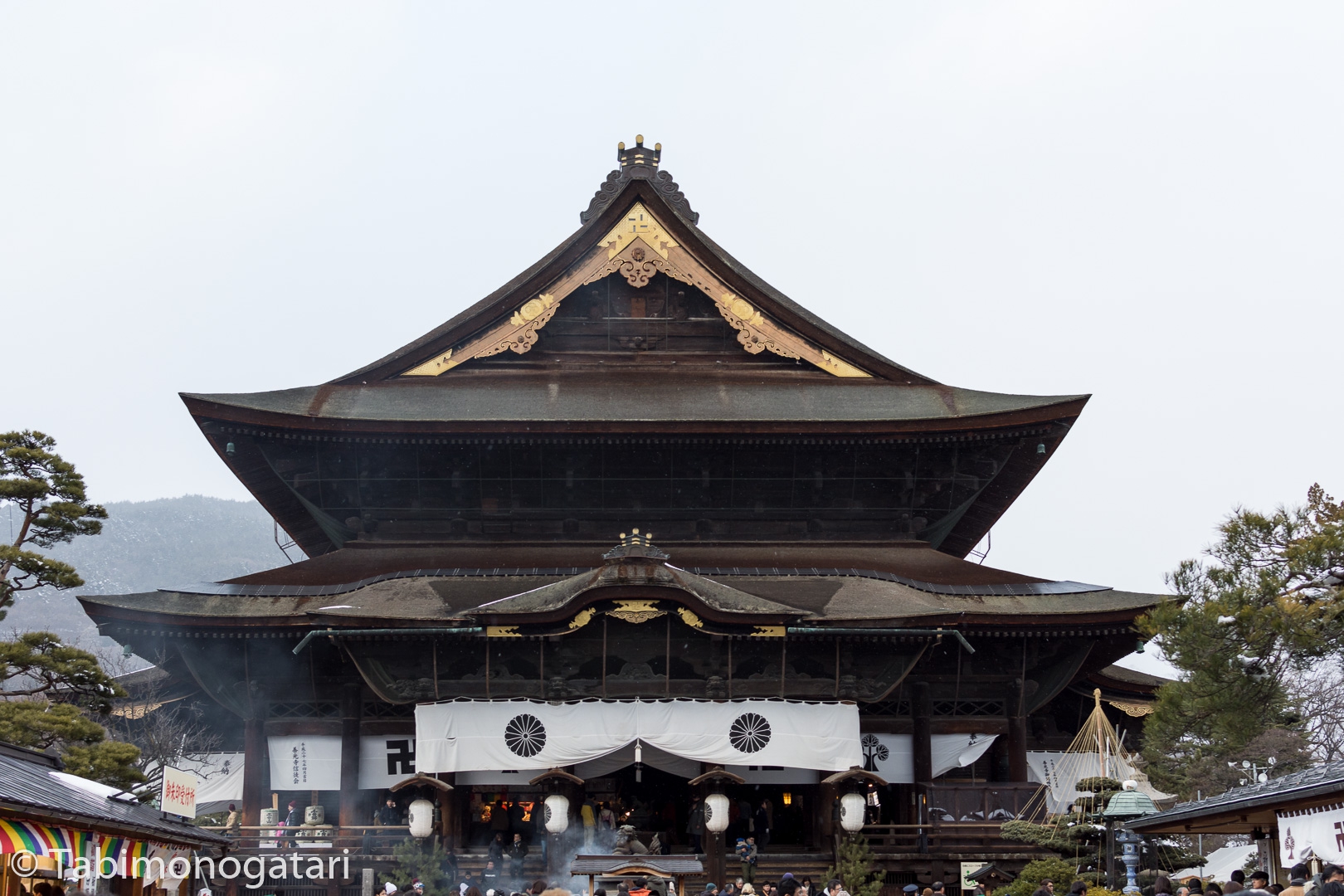 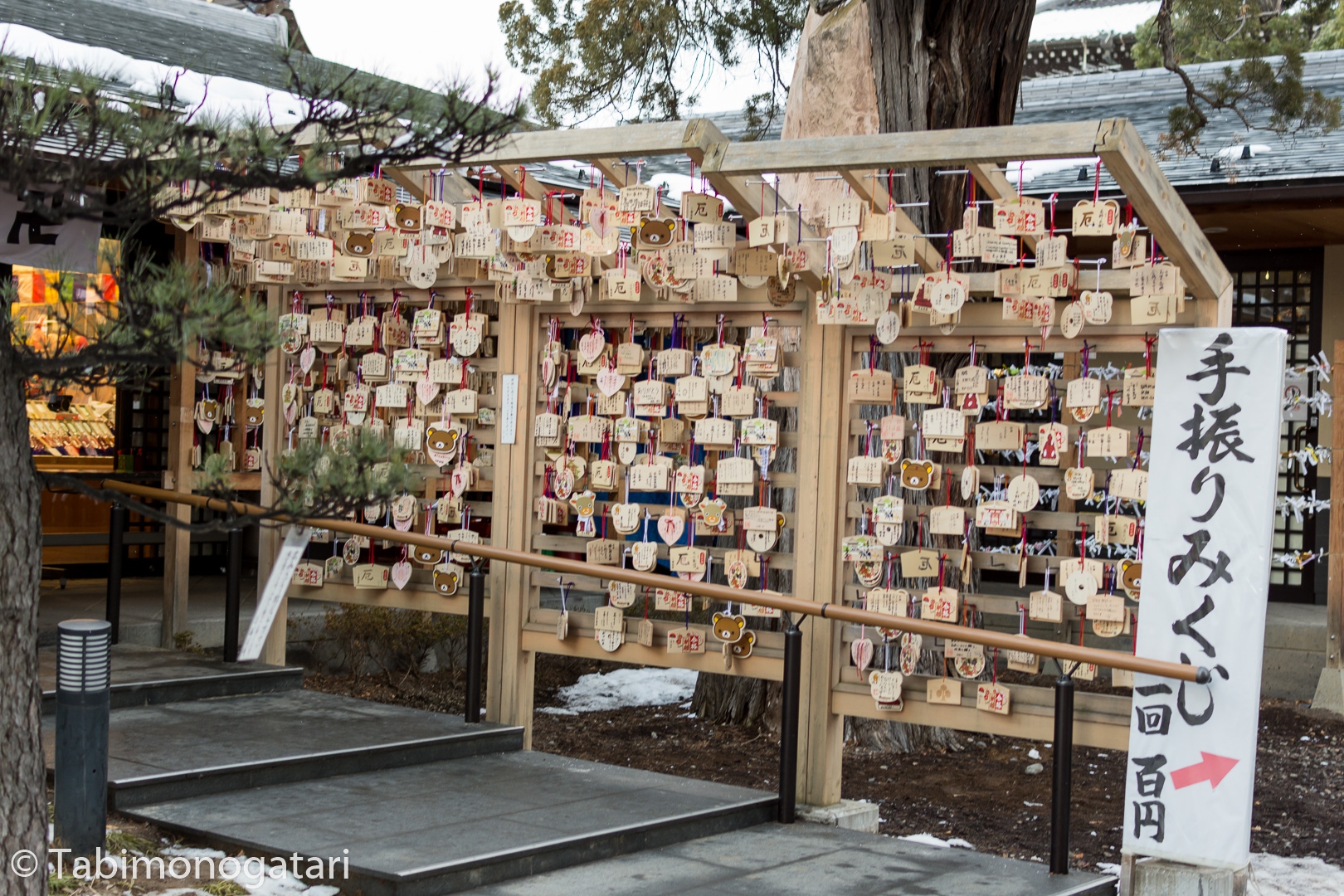 Like at other temples good luck charms and fortunes were sold by the shrine maidens. Most signs were translated into English, responding to the large number of foreign visitors since the Olympic games that occurred in 1988.

From the temple I followed the main street to the station and strolled through the various shops on the way. On the way I tasted some of the local treats, which were Oyaki (a fried bun filled with vegetables), Yakimusubi which reminded me of fried Onigiri, and Amazake, a fermented rice drink where the starch is broken down to sugar but not converted to alcohol yet. 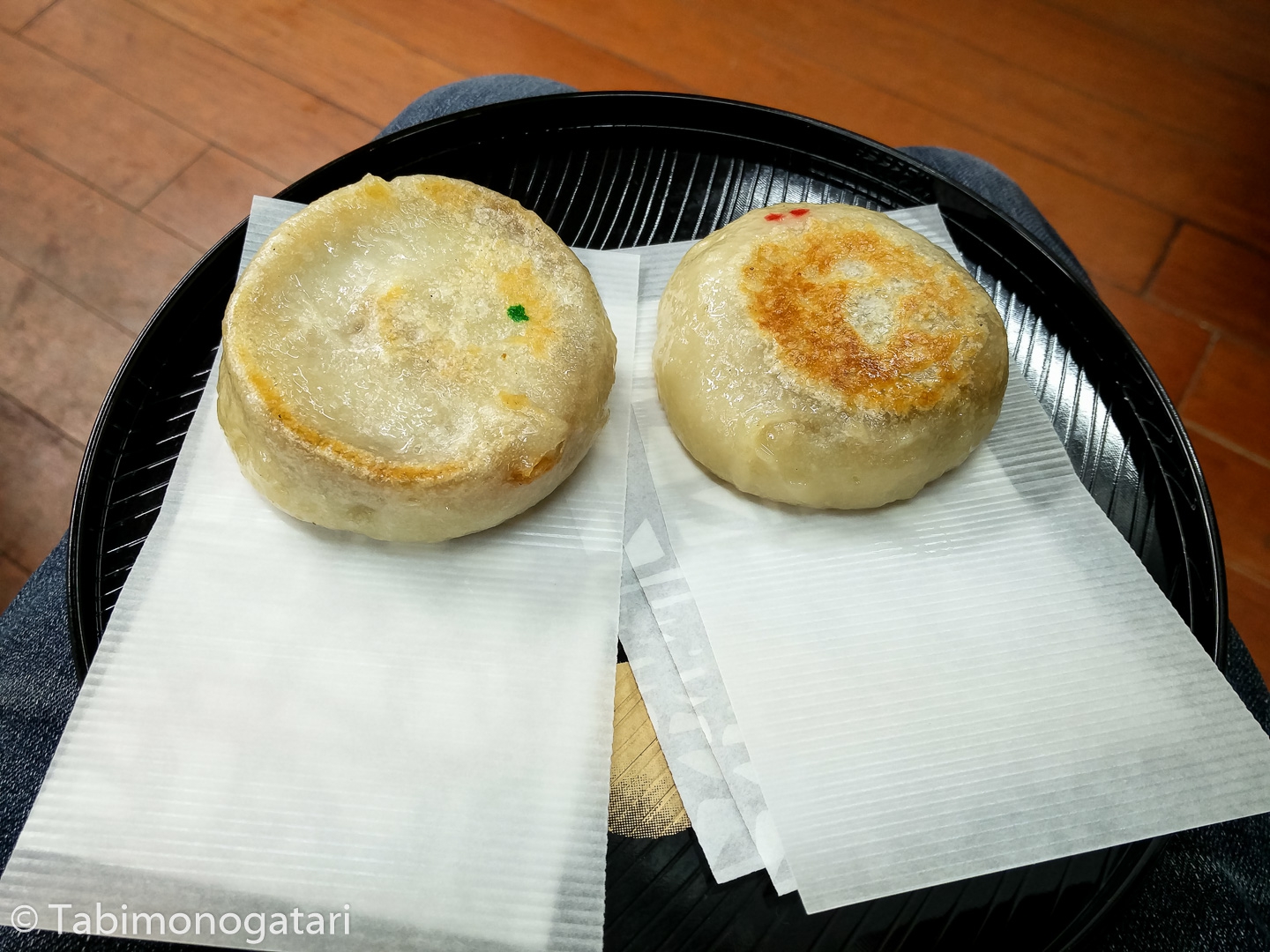 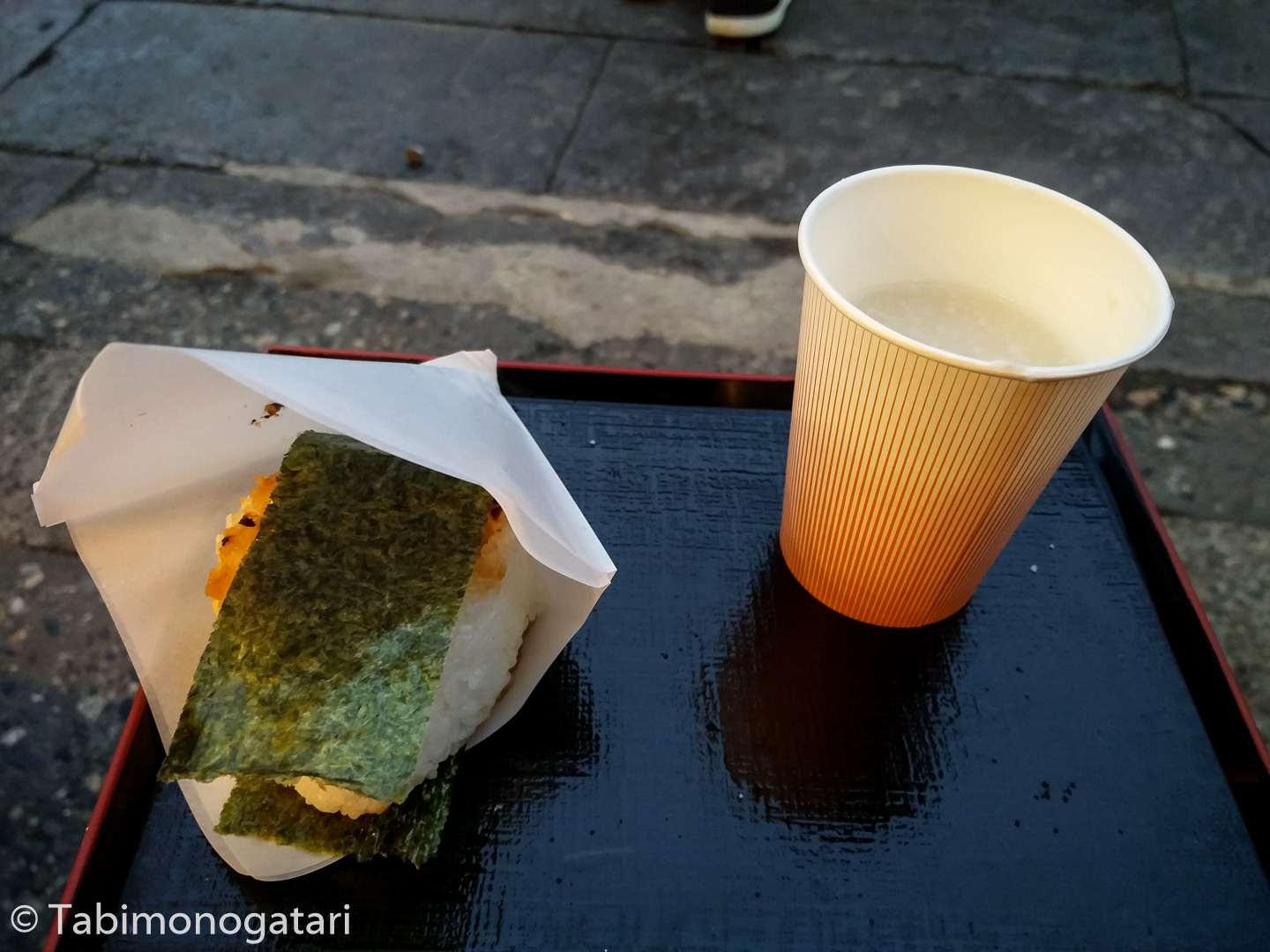 For dinner I had the main specialty of the Nagano region: Soba noodles. Thanks to its fertile ground, the farmers cultivate buckwheat and wasabi in large amounts. The local Soba are made with 8 parts of buckwheat flour and 2 parts of wheat flour which give them a slightly chewy texture. They are either served cold with a dipping sauce (zaru soba) or in a hot broth (kake soba). Somehow, I ended up ordering a gigantic serving at the restaurant Bocchi next to the station, partially related to me having difficulties reading the handwritten menu.

For once I returned to bed early and finished various things while watching some Japanese television.