Update: Official footage was uploaded. You can find it at the end of the article.

On Saturday I went to Osaka, mainly because of the Magical Mirai concert I wanted to attend for a long time. Let me say so much in advance: it was great! 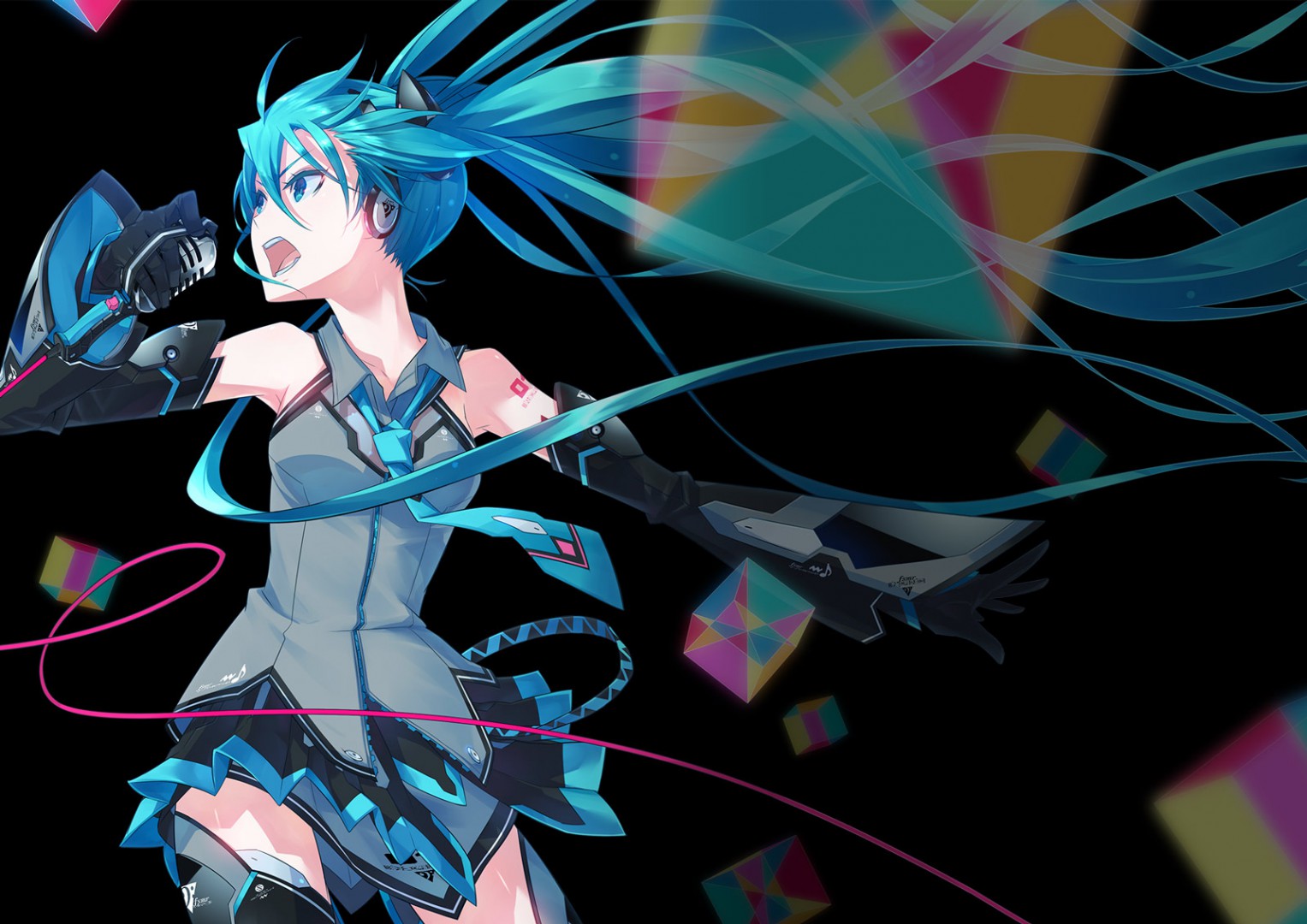 I got some very positive feedback from some of you by mail, facebook and twitter. I am very glad you seem to enjoy reading my travel journal so far. My goal is to share my experiences here with you and to encourage you to come over and see things by yourself one day.

You might be wondering what this post is about and why I attended a concert of a projection with a synthesized voice. There is more behind than you see at first.
While the phenomenon Hatsune Miku is rising in popularity worldwide I am sure many of you do not know much about it yet, so if you are interested in getting an overview, watch this short primer (below). This slightly longer video goes more into detail.

By the way, Happy Birthday, Miku! Her „birthday“ is the 31th August.

After visiting Osaka last time I can say this one is not a city for tourism, but for tourists. There are not much cultural sights, but the city with its very own flair compensates that more than good. Here, the clocks run differently, you could say. 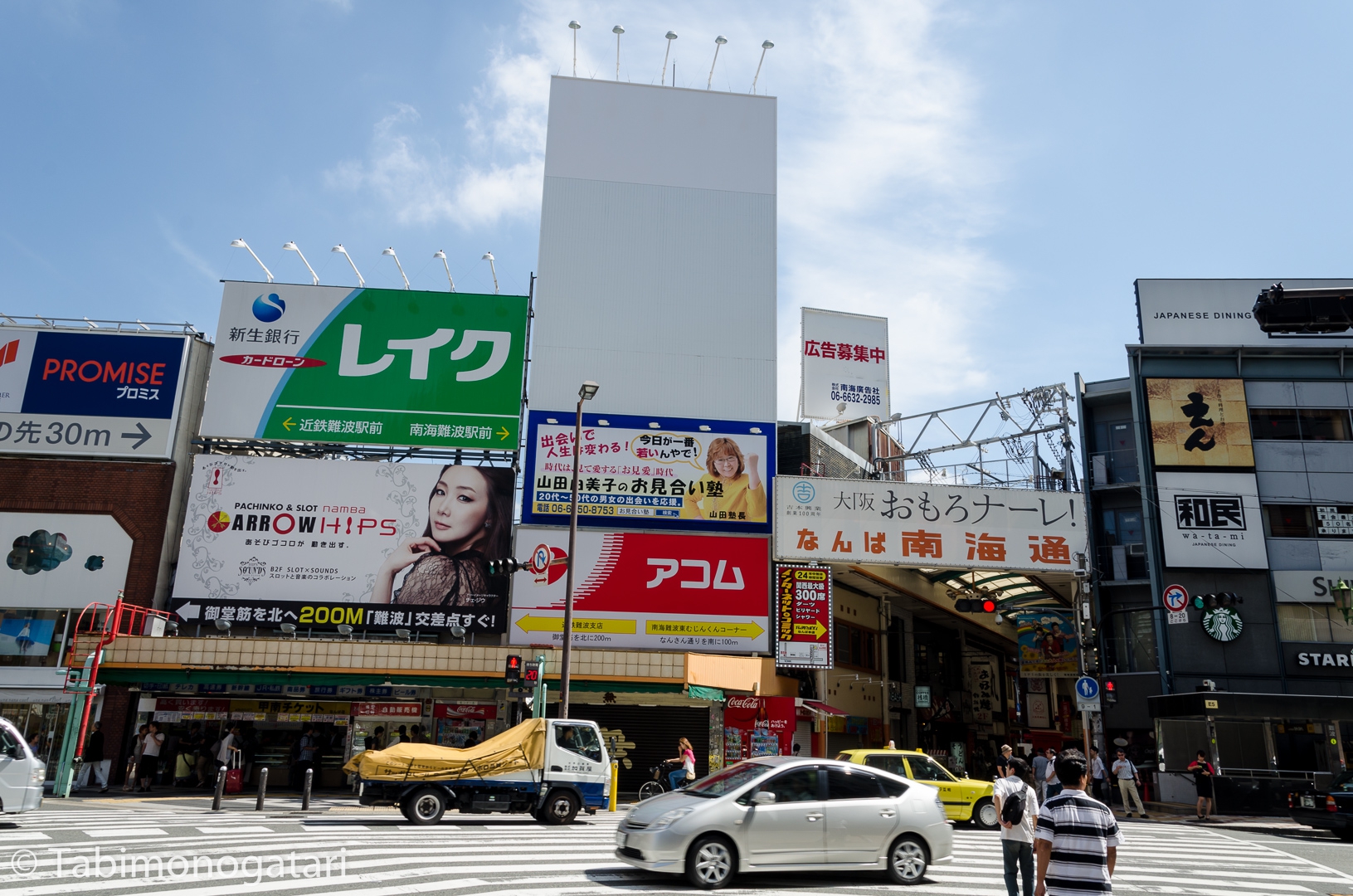 I just wanted to run a quick errand before I headed to the concert venue, so I did not spend much time there. I visited Den Den Machi, the largest otaku district in Osaka. You can see illustrated young girls looking at you with big eyes, hear high-pitched idol music in every other store and are invited by dressed up maids to visit their cafe. Japan has many faces and this is one of them. Prepare for the task deal when I visit Akihabara in Tokyo.

I picked up the new single from HachiojiP at animate and strolled a bit around, then I left for Namba station, one of the central transportation hubs. The station alone is gigantic with an endless underground maze so you will get lost every time. You will get lost in Osaka, but that’s fine, because there is so much to see.

Osaka is huge, so no surprise I needed to transfer two times and travel half an hour to reach the exhibition area in the harbour district.
In urban districts the most crowded train and subway lines have a woman-only car. Do you think we should import this to Europe? 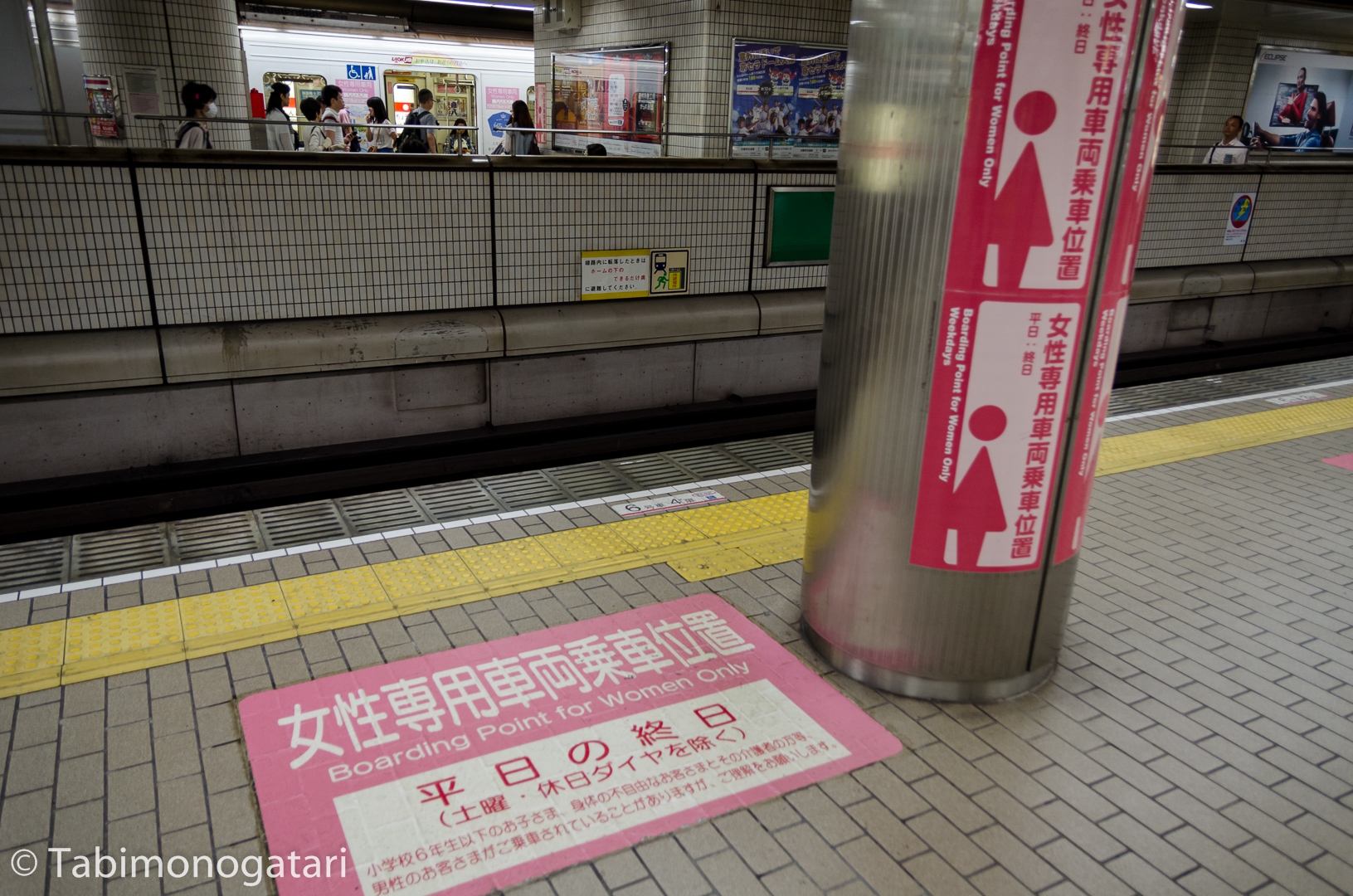 Fun fact: In escalators you line up in two rows, one for standing and one for walking. It is a shame this principle is often not working in Germany yet. In Hokkaido and Tokyo you stand on the left side and walk on right, in Kansai area you do it the other way round.

When I arrived about noon the exhibition hall was already filled with many people. The Vocaloid music producer HachiojiP or 八王子P was just doing a live gig. On an event stage stage he did a live DJ session, remixing his own songs which are mostly electro and have a strong beat. There was a large crowd in front of the stage which I joined just as I arrived which still grew bigger with time. He played his famous songs Electric Love and Sweet Devil and also songs from his new album. 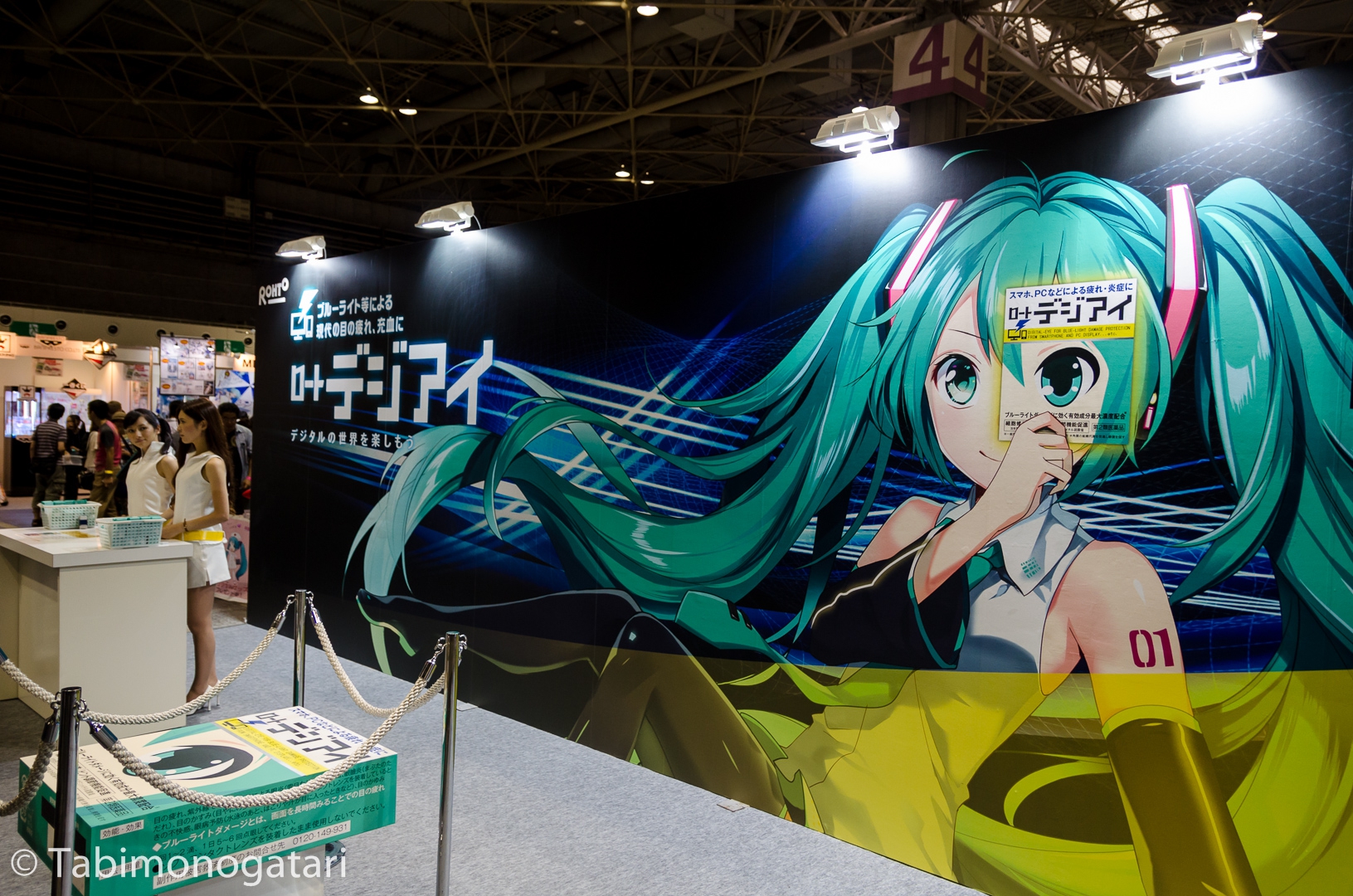 Next I tried to buy some official goods from the venues. Much was apparently already sold out, but I still managed to get pretty much what I was looking for. I always wanted to have an electric glow stick for concerts, now I have one which can light in six different colours. They are way better than the chemical ones, both in brightness and ecology.

There are many corporations who produce Vocaloid themed articles for promotional purposes. Right now you can buy eye drops with an illustration of Hatsune Miku on it, which helped to raise the attention of many fans.
Good Smile Racing and other companies were there too. They were exhibiting an ita-bike and an ita-sha. 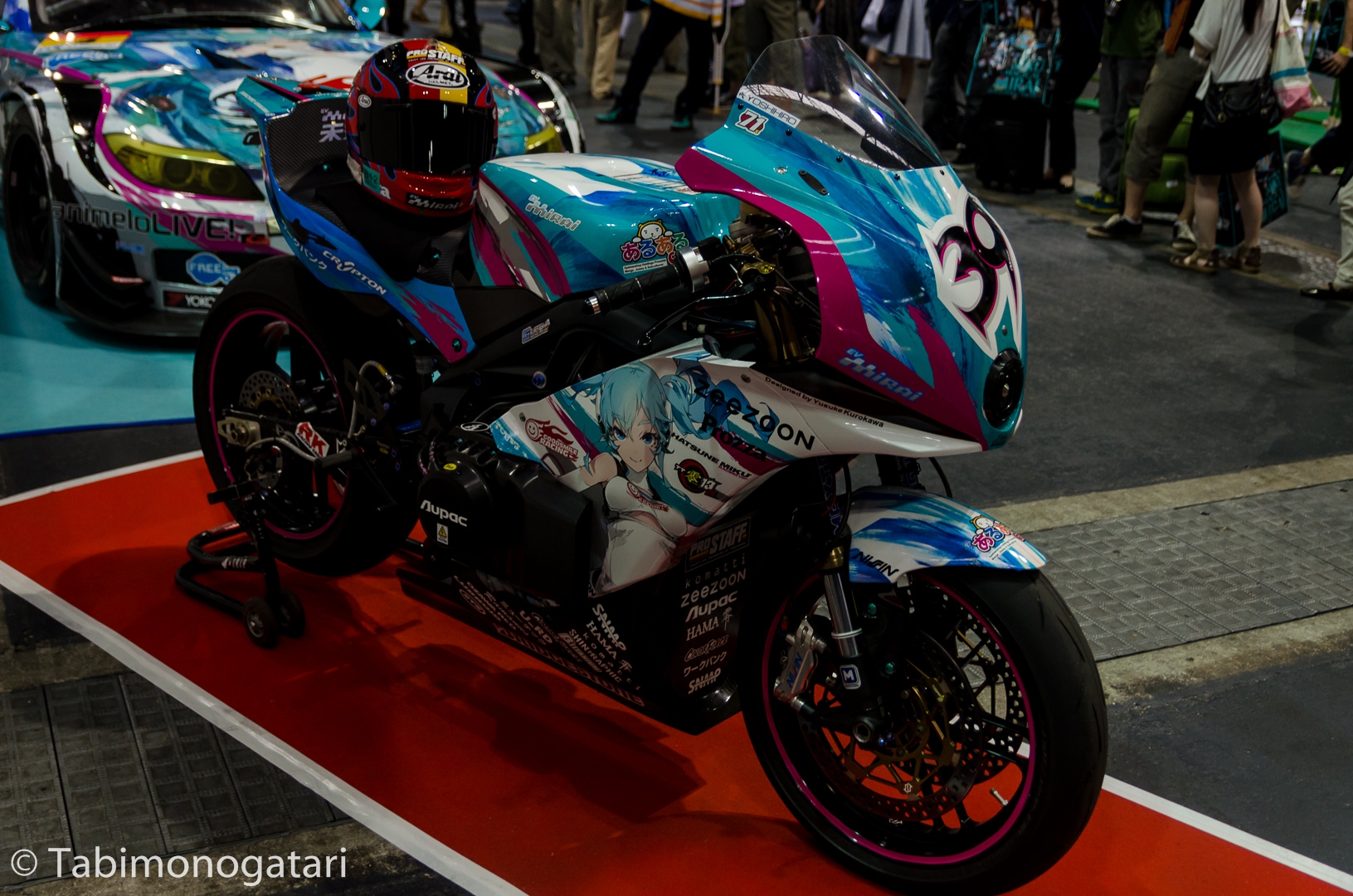 More over, there was a wall for everyone to draw and write on. Many did very skilled drawings in so short time. I wrote something down too in the lower corner. 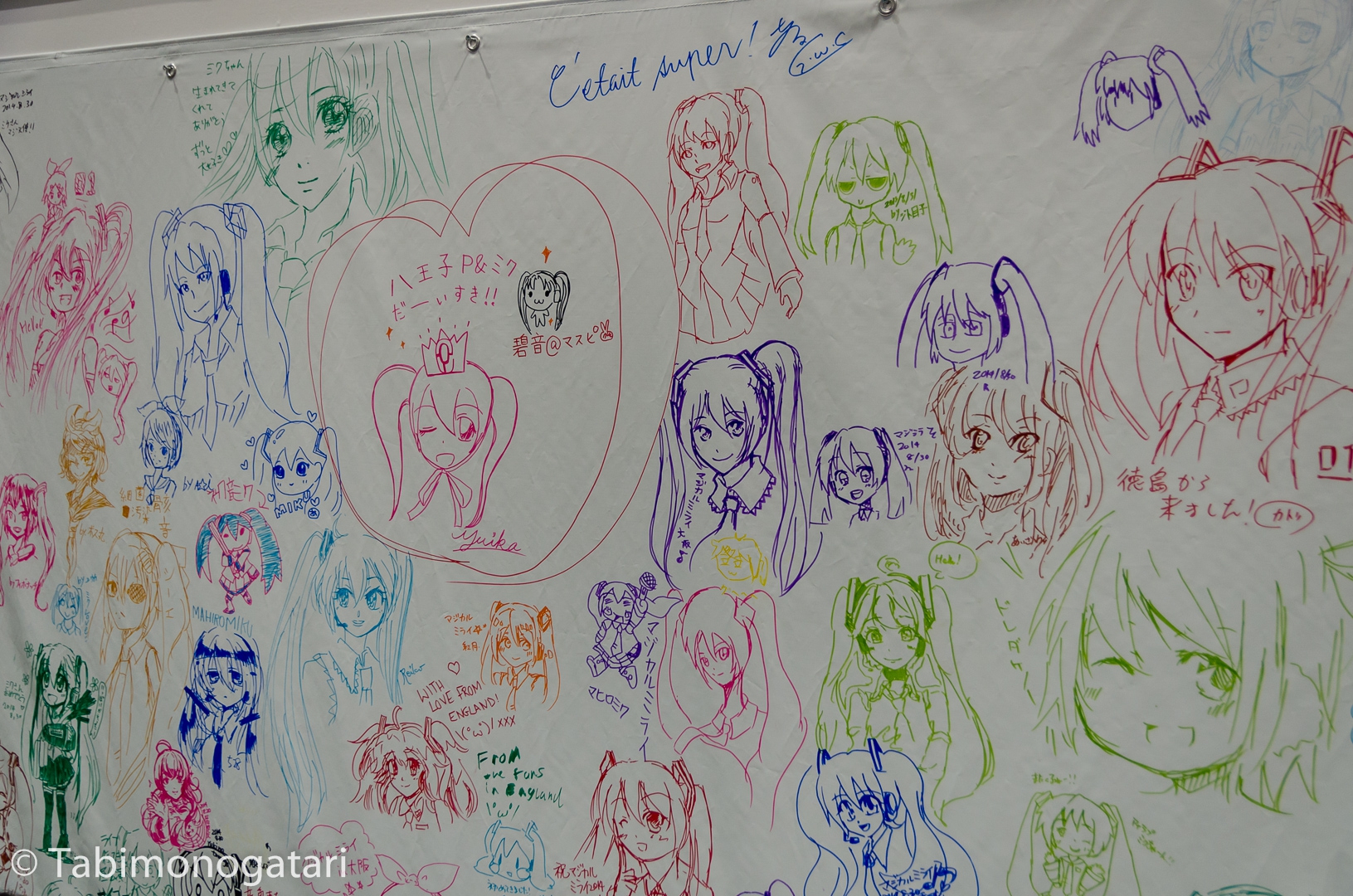 Here is my loot of the day. It looks like a lot, but there were many free articles too. 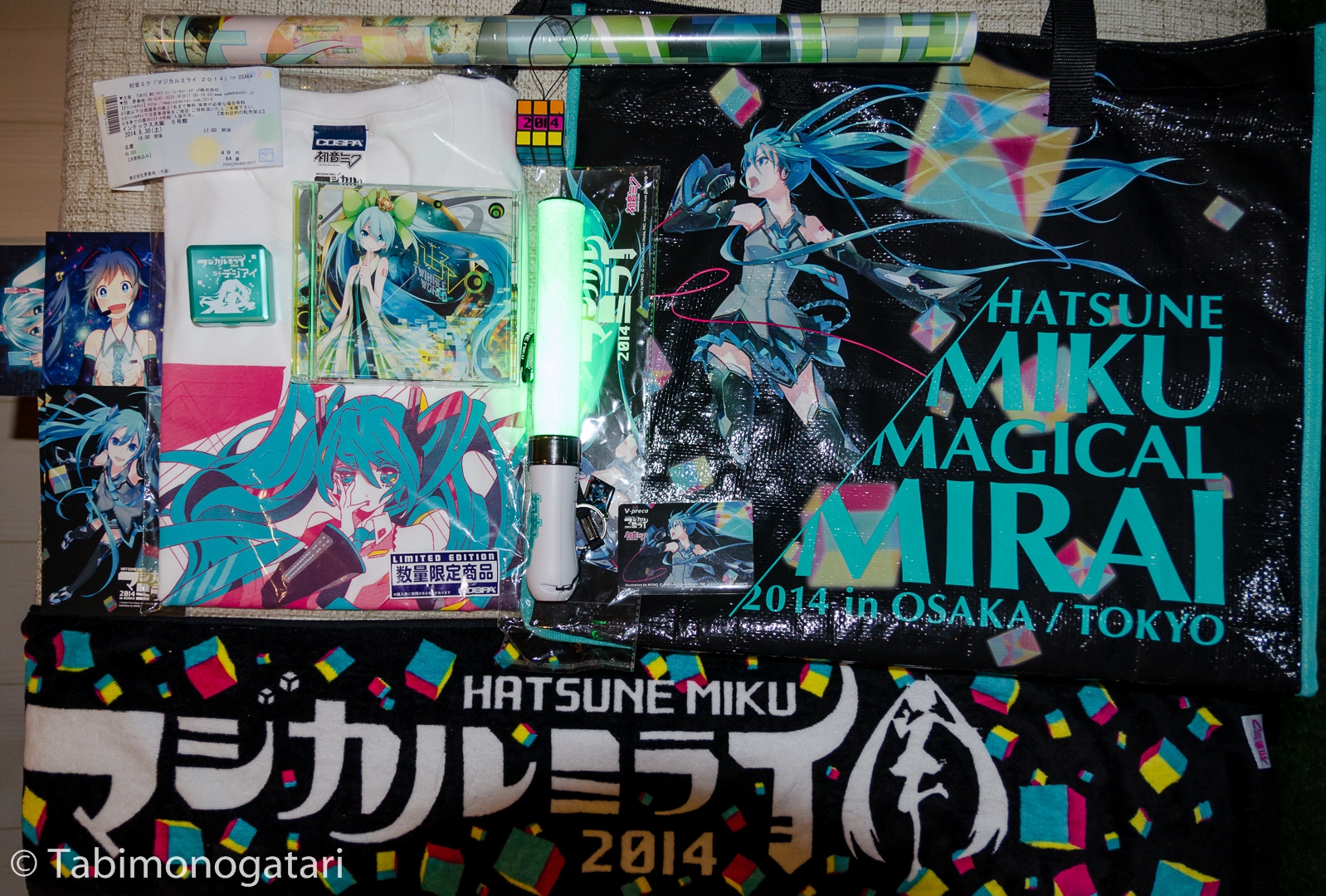 At four, one hour before beginning, we could enter the second hall reserved for the concert. The building was quiet large and was completely covered with seats, maybe about 120 rows with 100 seats each on average. There were three seat ranks, I managed to get the second-best category, which still could have been anywhere from front to back. While I did not get the best possible seat I was not punished by sitting at the very row either. I ended up in row 64 close to the center.

I attached some videos from the last year’s concert. Filming was prohibited but like every time the filmed footage will be made into an official concert recording release. Maybe I will spot myself somewhere. I jumped up high from time to time.

The concert started on time, or better the intro. Two dancers with a synchronized light show and dubstep tunes made a great start for the concert.

After that, Miku appeared for her first song, Kagerou Days. Even if you do not listen to Vocaloid music you might recognize the song from the recently aired anime Mekaku City Actors.

The stage was basically a giant screen, or better a wall of glass on which multiple beamers projected a three-dimensional rendered model. The band was placed at the edges of the stage. On top of everything a wide screen showed additional animations. Similar to last year’s concert in Yokohama: The projection and the choreography were done very well again. It looked like a real person performing there. The animation sequences were also well done, especially the hair moved according to the laws of physics, unfortunately this is not always the case in other animated productions.
The band really did its best and with the light- and sound-engineering the songs had a completely different feeling compared to the original music tracks. The vocals were tuned and some melodies rearrang ed for the concert, making it even more special.

Many great songs I knew followed after, including both very fast songs like Weekender Girl and ballads like Karakuri Pierrot and glow. Everyone was very excited during Cat Food and Tell Your World.

Many bought the glow sticks available at the venue to support the mood in the concert. Actually this is quite a tradition in Japanese concerts by now. There is a kind of choreography how and when you swing your glow sticks according to the beat and speed of the song. It is hard to describe, so have a look at the live videos and you might see it. When everyone did the same motion it looked great on screen.

For some songs special designed costumes and animations were used, the song Deep Sea Girl had a very nice intro with an underwater scene and everyone swang their blue-coloured glow sticks.

When Last Light Good Night started, everyone became quiet to listen to the slow and calm song.

Miku was not alone of course, the other Vocaloids joined her for some songs or performed alone. To example we heard Tokyo Teddy Bear from Rin and Hello Worker from Luka. Meiko and Kaito also performed a song each.

When Miku announced by herself that the next would be the last song everyone shouted out in disbelieve. The lights went out and for a felt eternity everyone shouted and waved their sticks in expectation of an encore.

We were lucky (until now every concert had one), after about five minutes of silence she came back for three more songs, including Sweet Devil, one of my favourite songs.
https://www.youtube.com/watch?v=T7NUv1Eo7z0?t=2m28

The last of the last was 39, a fitting song for the end I think.

Jumping, shouting and waving in the hot hall sure made one sweat. Especially if you are not alone, but with maybe 1000 others and that for two hours.

After the concert was over the hall quickly emptied. Over twitter I arranged a meeting with three other fans, two Japanese and an Australian. We quickly got along well and wanted to go out for Karaoke, but the place they were looking for was closed for unknown reasons, so we settled for just eating out.

Close to midnight I went back to Kobe. It is rare to see an empty train like this, especially in Osaka! 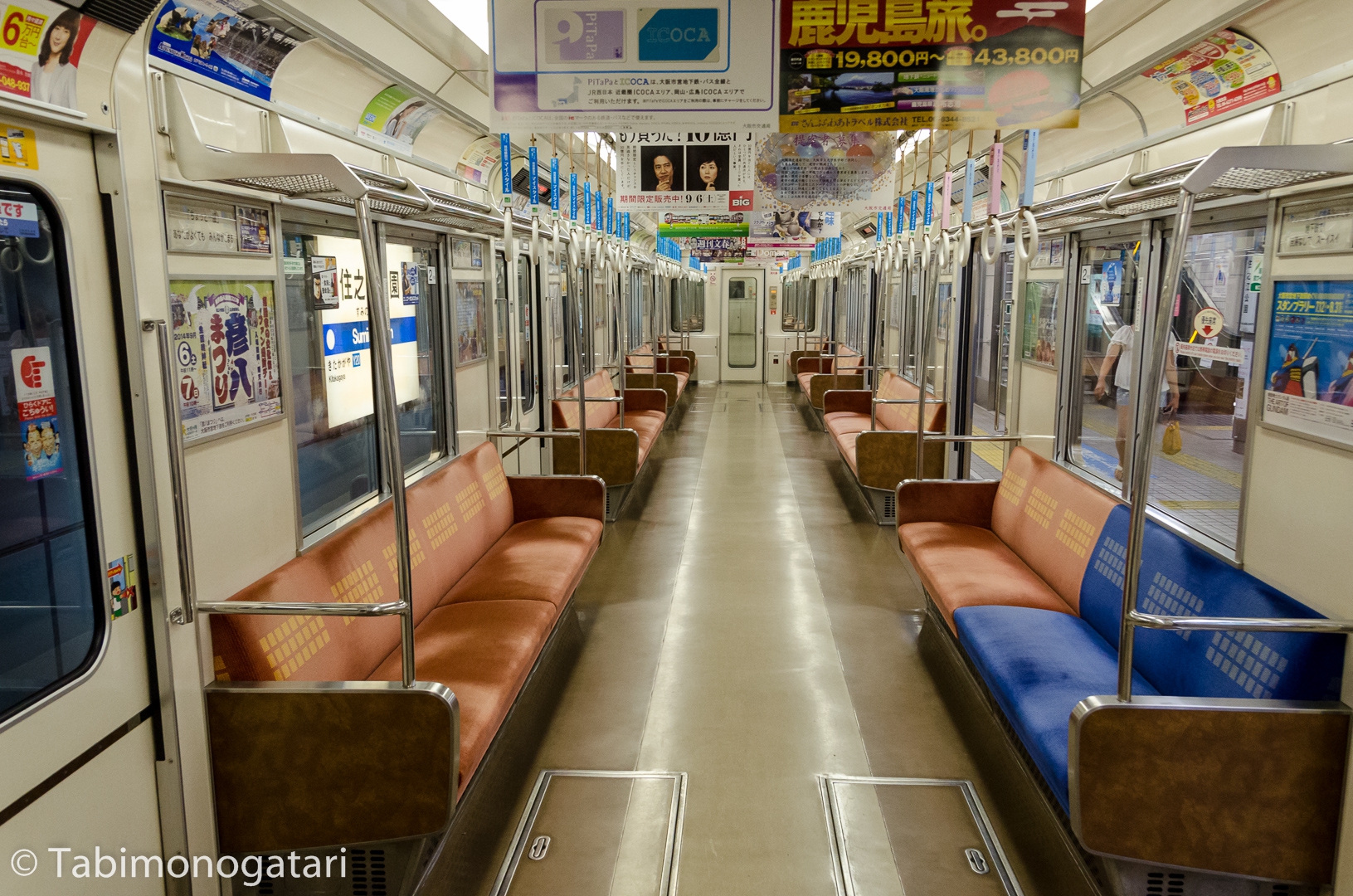 The day after I met up with the two Japanese guys again and went shopping in the Otaku shops in Nihonbashi. Many goods were too expensive, but I found a few nice things. 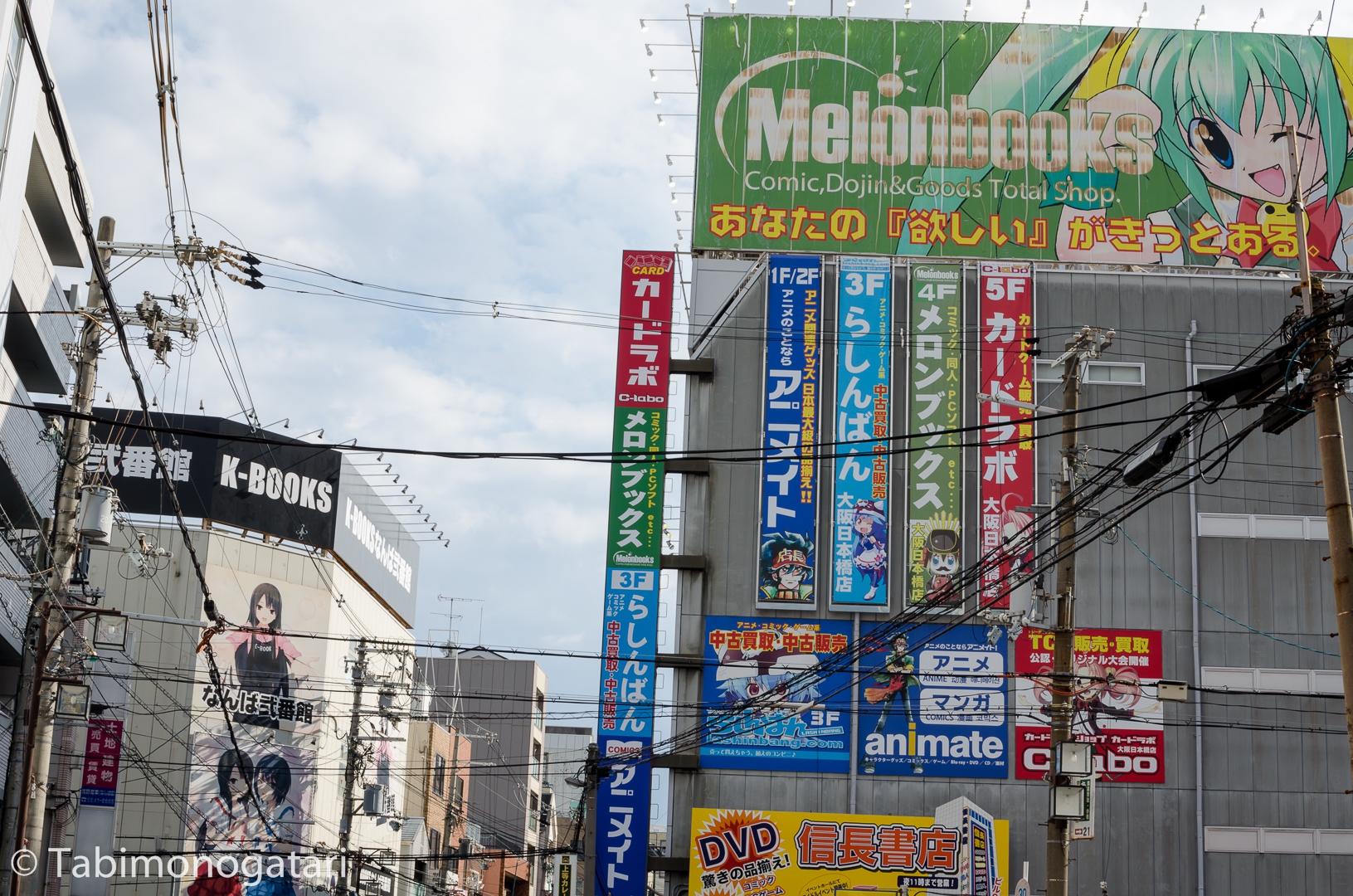 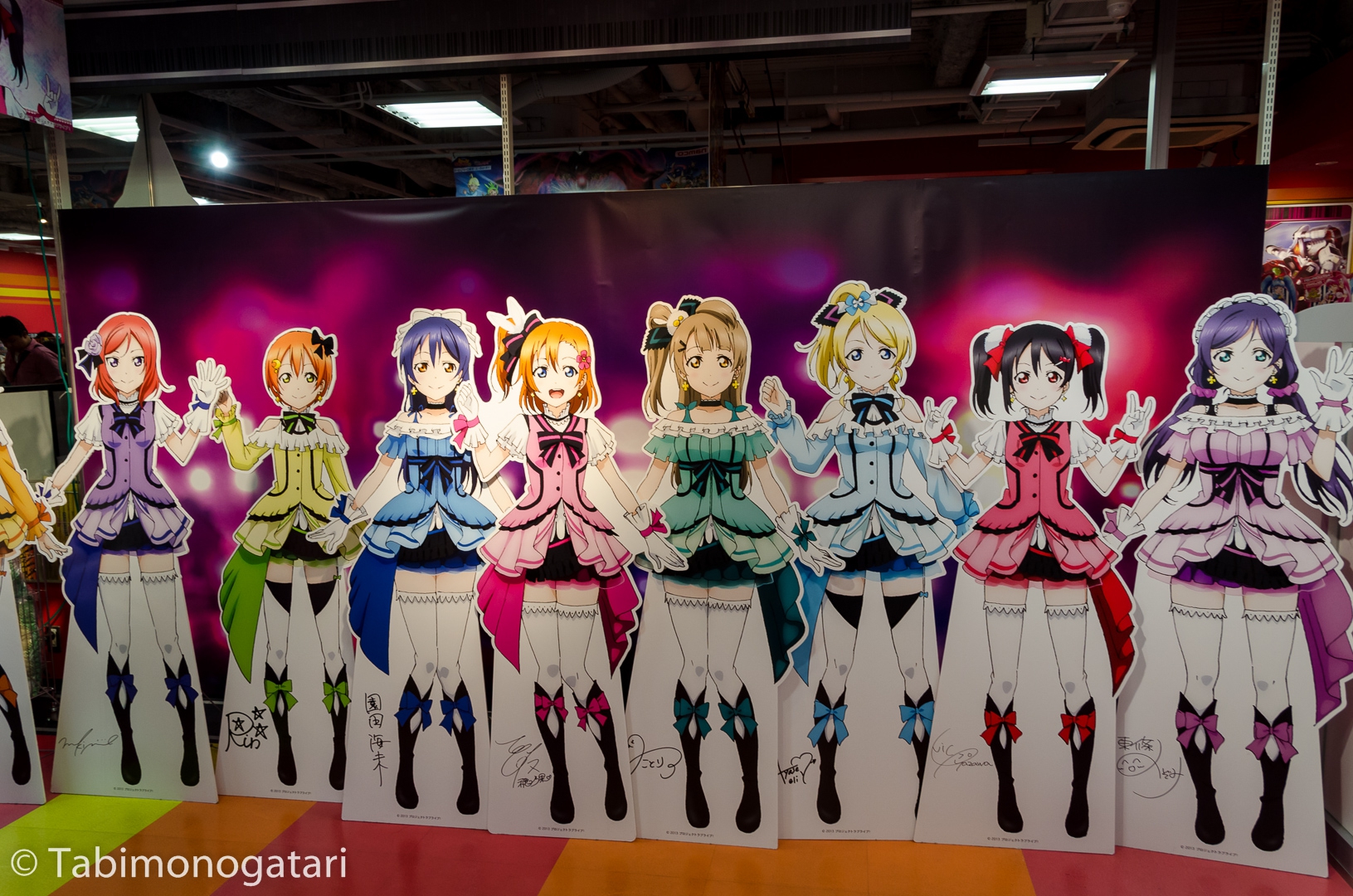 For lunch we had Okonomiyaki in three flavors. The great thing about the dish is that you literally put anything on it (お好み means all you want).

By the way, if you ever come to Osaka, please visit the South Exit of Osaka station. There you can see the very unique Water Clock. 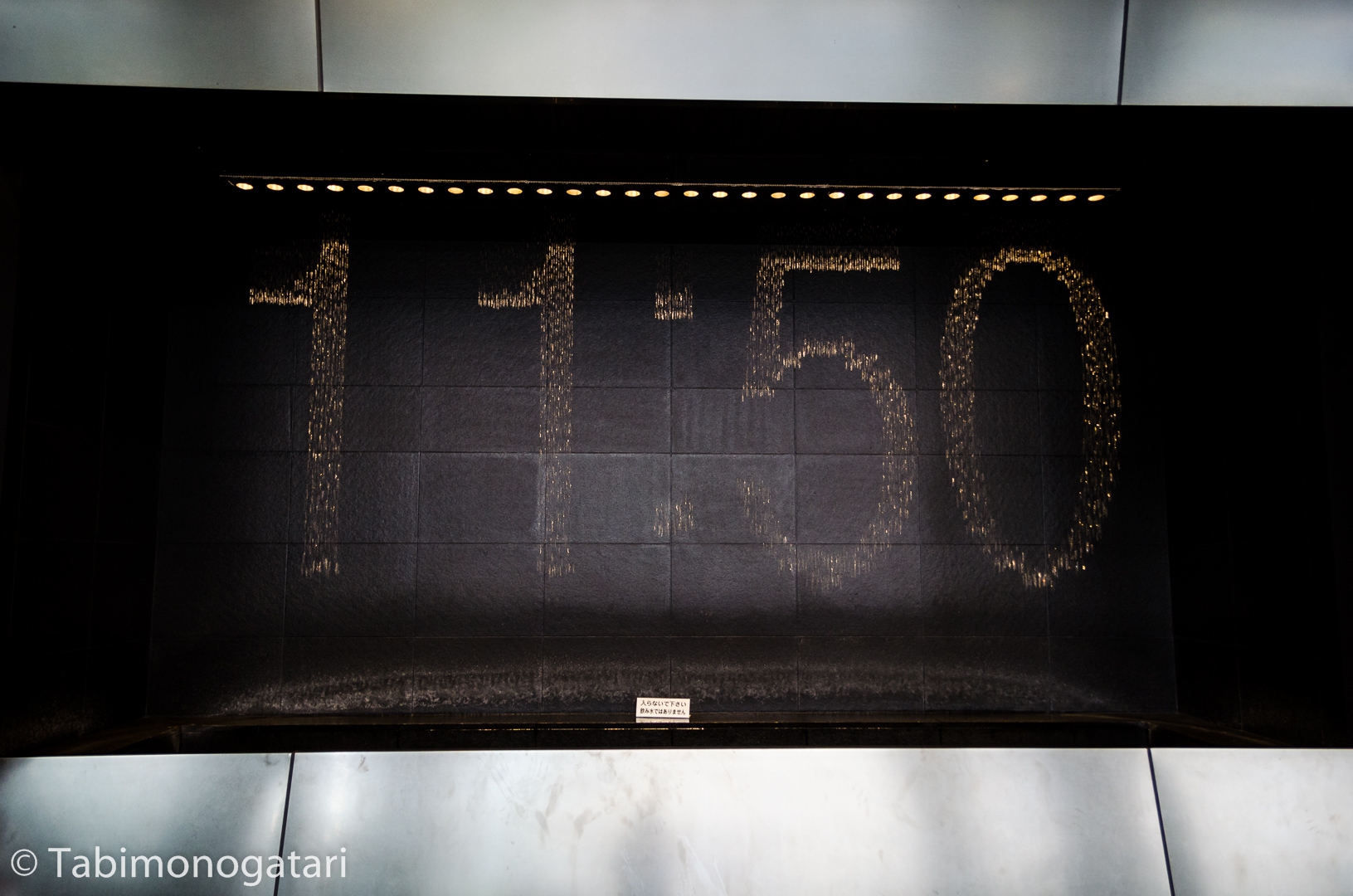 In the early evening I went back to Kobe.

Here is a short excerpt from the concert.

Impressions from the venue: